Choosing your perfect canine companion might be too overwhelming for you. After all, there are various dog breeds to choose from. Depending on your lifestyle and preference, some may be suitable for you, and some may not. For today, we will talk about the multi-purpose working dog that is serious while working, yet playful at home — the Catahoulas Leopard Dog.

The Catahoula Leopard Dog is an American dog breed named after Catahoula Parish, Louisiana. It is the only dog breed to have historically originated in the state of Louisiana.
This dog breed is a medium-large, short-coated dog, that is known for its varied eye colors, coat, and pattern. They are well-muscled and powerful, but with a sense of agility and endurance. Traditionally, they are used to hunt feral boars and large games. They are independent, territorial, and protective. But once they determine their place in the family unit, these dogs are affectionate, loyal, and gentle. They are used as herding dogs, bay dogs, three dogs, watchdogs, guard dogs, and of course as loyal companions.

The Catahoula Leopard Dog’s lineage is unknown. It is believed to have originated from the mid-1700s when French settlers crossbreed their dogs with well-adapted swamp hunting wolf dogs owned by Native Americans to create a better working dog. The breed’s exotic name, Catahoula, is of Choctaw origin which means “sacred lake”.

Regardless of its mysterious origin, on July 9, 1979, the Catahoula Leopard Dog became Louisiana’s official state dog. In 1995, the United Kennel Club recognized it as a member of Herding Group.

Initially, Catahoula was used for hunting large game. They were used to catch wild hogs and cows. With this, they were able to develop a unique way of working the stock; they create a “canine fence” and within this “fence”, the wild herd is controlled by the dog’s master. This working instinct is what sets them apart from other herding and working dog breeds. Regardless of its appearance, a Catahoula should have these working instincts to be considered a pure breed.

Since Catahoula is a working dog, it is bred for its ability and temperament. As a result, its appearance is somewhat varied. Generally, Catahoula is muscular with a rectangular-shaped body. They are likely to have a large head, thick muscular neck, drop ears, a strong, slightly tapered muzzle, and a long curved tail.

Catahoula has a single, smooth short, or coarse, medium coat. The short looks almost painted and the medium can have extended “feathering” on the hind legs, tail, and chest.

They come in many colors including blue merle, red merle, brindle, black, grey, tri- or quad-colors, patchworks, or solid colors.

They are also known for having heterochromia which could result in varied eye colors. Catahoula’s feet have more prominent webbings which makes them a great swimmer. 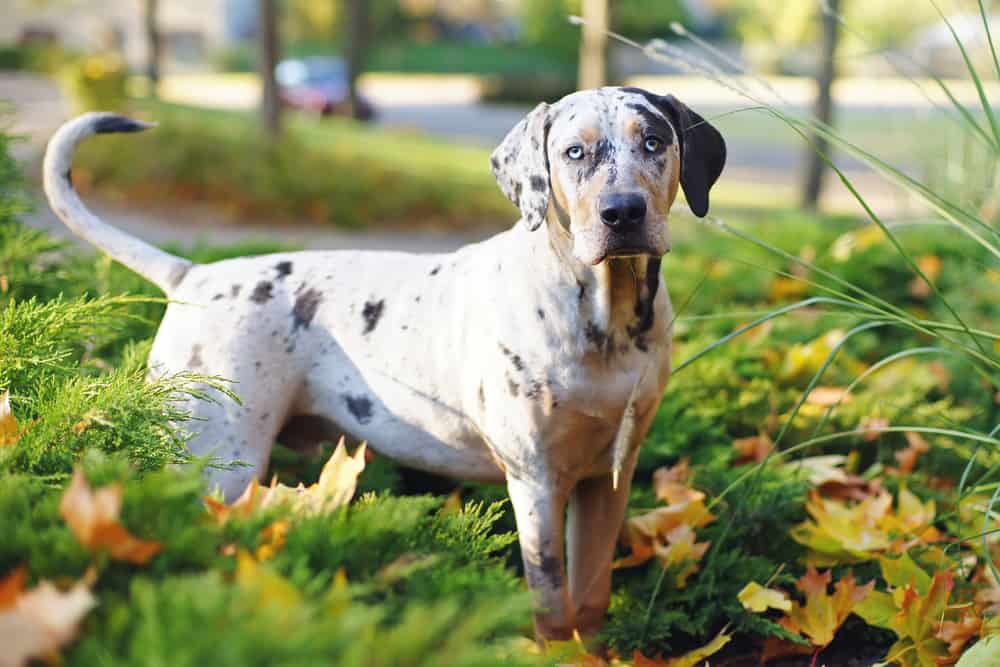 Catahoulas range in size. Typically, males are slightly larger than females. Its height ranges from 20-26 inches and weight from 40-112 pounds. 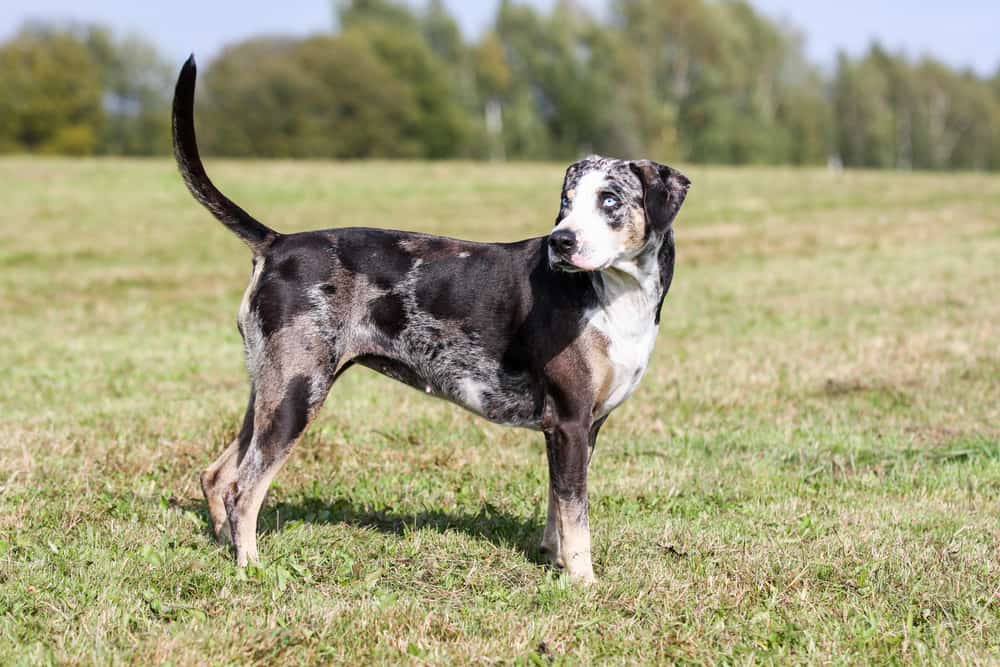 On average, the Catahoula Leopard Dog lives between 10-14 years.

Catahoula shed minimally but while shedding, they should be brushed several times each week. It will help them remove dirt and loose hair from their coat. They should be bathed seasonally or once they become smelly. 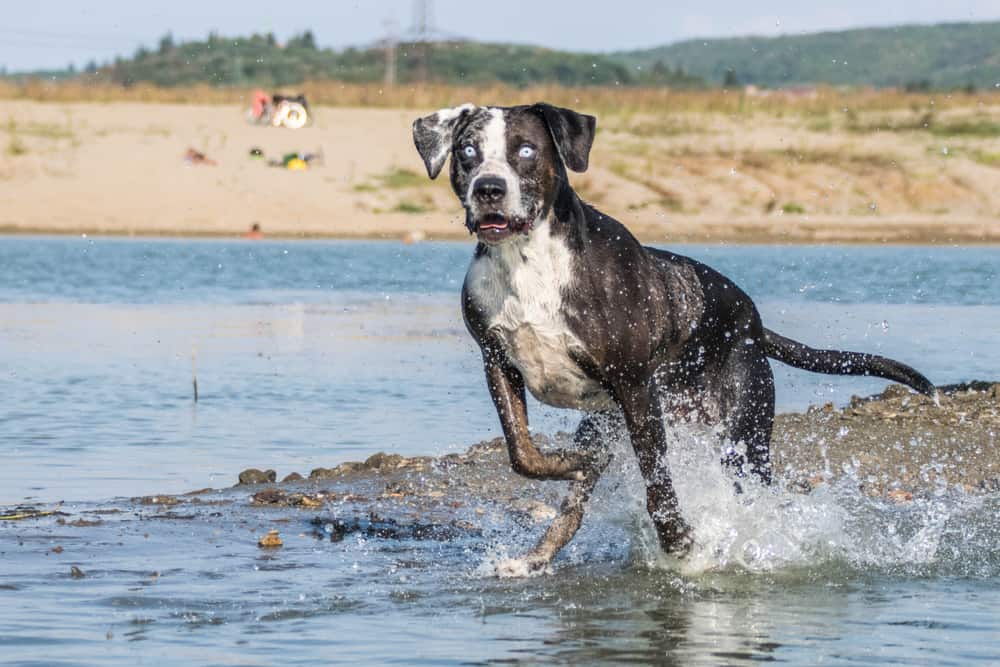 Catahoulas are loyal, independent, watchful dogs. They are not aggressive towards people, but wary of strangers. They are loving and protective of family members. Their instinct is to track and herd game, and if that is not an option for them, they need another outlet to spend their energy. They bark or go on alert at the approach of strangers. They do not accept mistreatment or physical abuse. They need firm but fair treatment.

Like every other dog, they need early exposure to different people, environments, sights, and sounds. This ensures that they grow up to be a well-rounded dog. Regular visitors, walk in the park, or leisure strolls will help him develop his social skills.

Spending a lot of time with this dog greatly helps improve his health and happiness. They crave attention and interaction, so if you don’t have enough time for them, then they might not be a good fit for your home.

They can also be fierce when they’re around other dogs, especially those of the same sex. 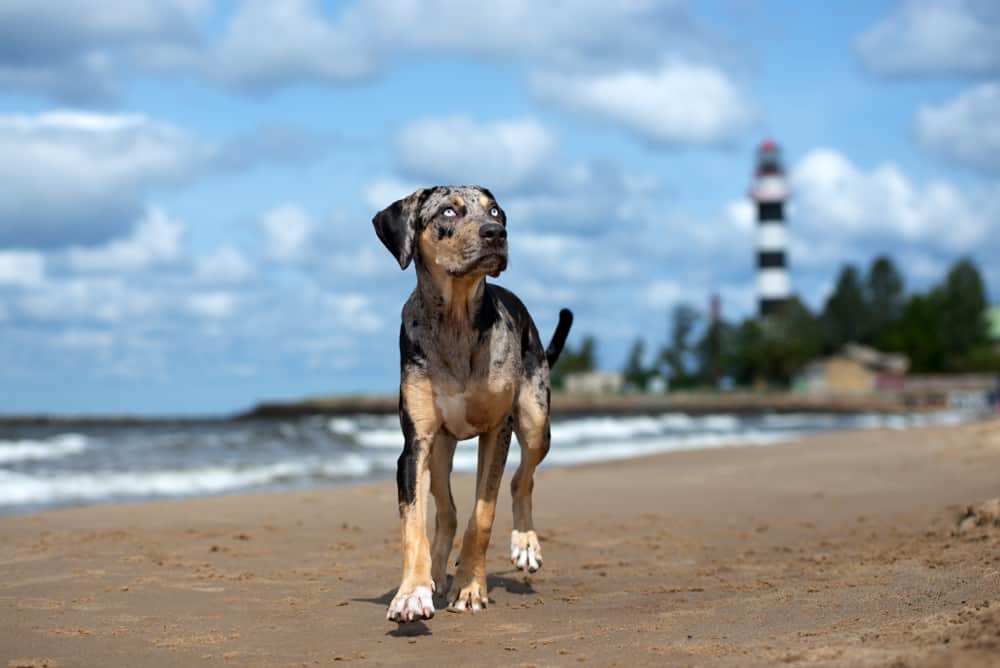 Catahoulas are highly intelligent and energetic. Just like the other smart dog breeds, they need to have a fair amount of stimulation in order to stay energized and happy. They are assertive dogs and are quick to assess situations, making them perfect teammates in law enforcement. 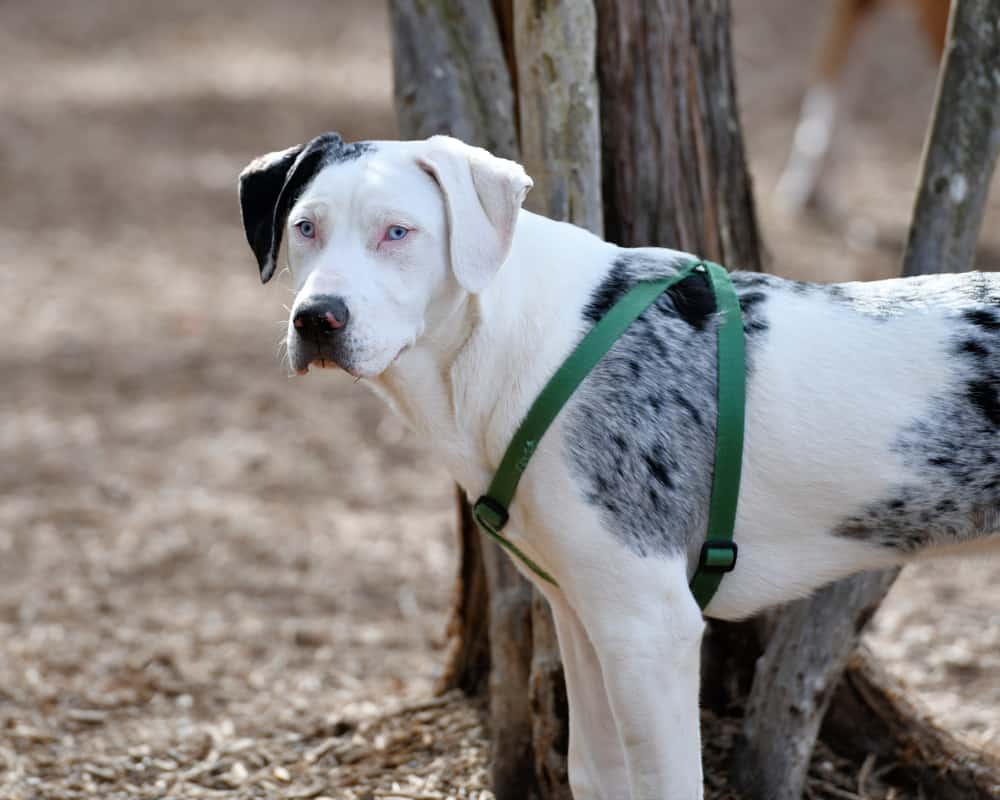 Catahoulas weren’t called multi-purpose dogs for nothing. With great speed and undeniably significant force, they are used to hunt games and herd cows and boars. They can protect you from potential dangers, which makes them a great guardian dog.

Proper sports training and exercise is a great way to improve their agility. 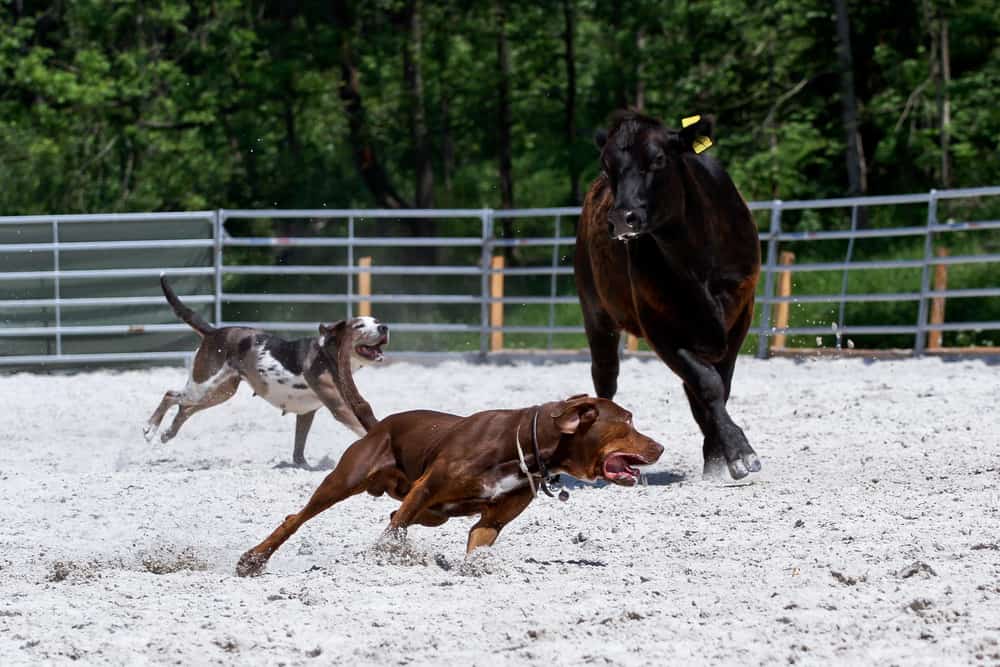 Let us not forget that Catahoula Leopard Dogs were bred to herd wild boar and cows. They need exercise that does not only keep their bodies moving but also stimulates their minds. Catahoulas need to use his copious amount of energy to work, so a walk in the park would not be sufficient. Since his work ethic is unstoppable, doing a productive job makes this dog happy.

Outdoor activities like swimming, hiking, retrieving balls, or flying discs can be a good outlet for expending their energy.

If inadequate physical exercise is provided, aggression, destructive, and undesirable behaviours can develop. 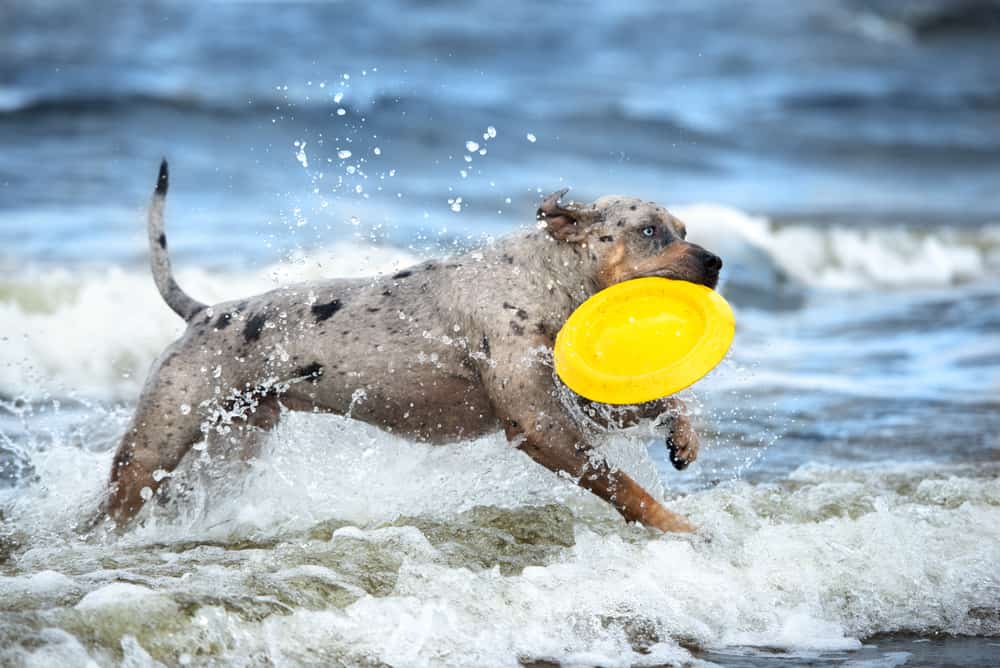 Catahoulas work like an adult at the early age of 10 months, though they are not fully matured until they are 2 years old. Therefore, it is essential to make their exercises and training fun so as not to cause burnout at an early age.

Without training and mental stimulation, Catahoulas can become destructive at home. Due to their independence and territorial instincts, becoming well-socialized is also very important for the Catahoula to be a gentle and affectionate companion at home. 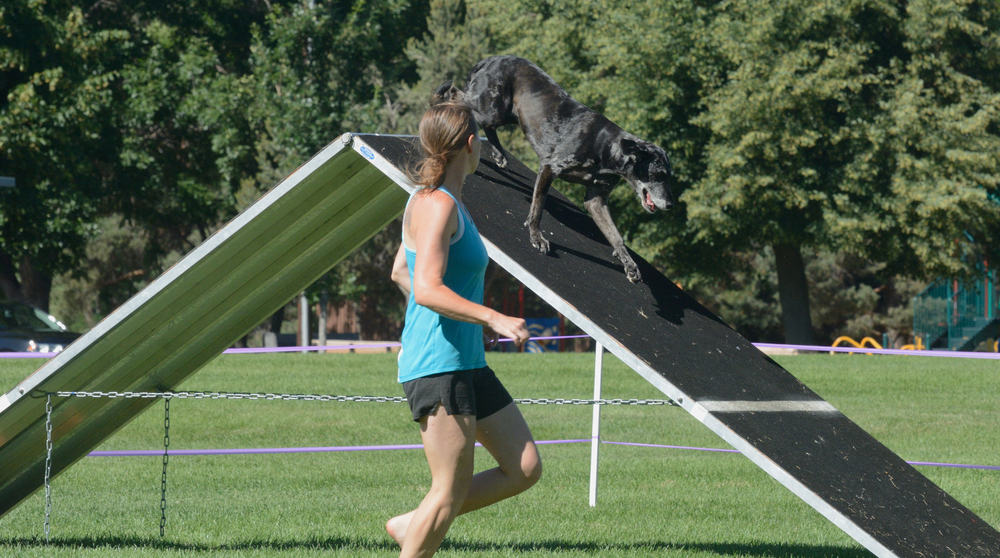 Despite their natural hunting behavior, most Catahoulas are gentle with children and will protect them against aggressors. Their energy perfectly matches with young kids which makes them a good addition to the home setting.

This breed attaches well to his human family quickly and therefore needs their attention and affection most of the time. In order to protect his family from danger, he must live in the house with his humans. They do not thrive outdoors or living away from their family.

But, they are wary of unknown adults. Proper training and socialization at an early age may help lessen in development of this undesirable behavior, but won’t completely eliminate them.

Because of their intelligence and high-energy, Catahoula Leopard Dogs often try to learn new things and will always be curious about their environment. Without a proper amount of exercise or playtime, he will start to cause trouble by digging holes or chewing things, making them not suitable as an apartment dog.

Their independent manner lets them explore and wander off alone. It is encouraged to have a huge space of a room or fenced space for them to roam. Living in a city or suburbs might make them feel too caged in. 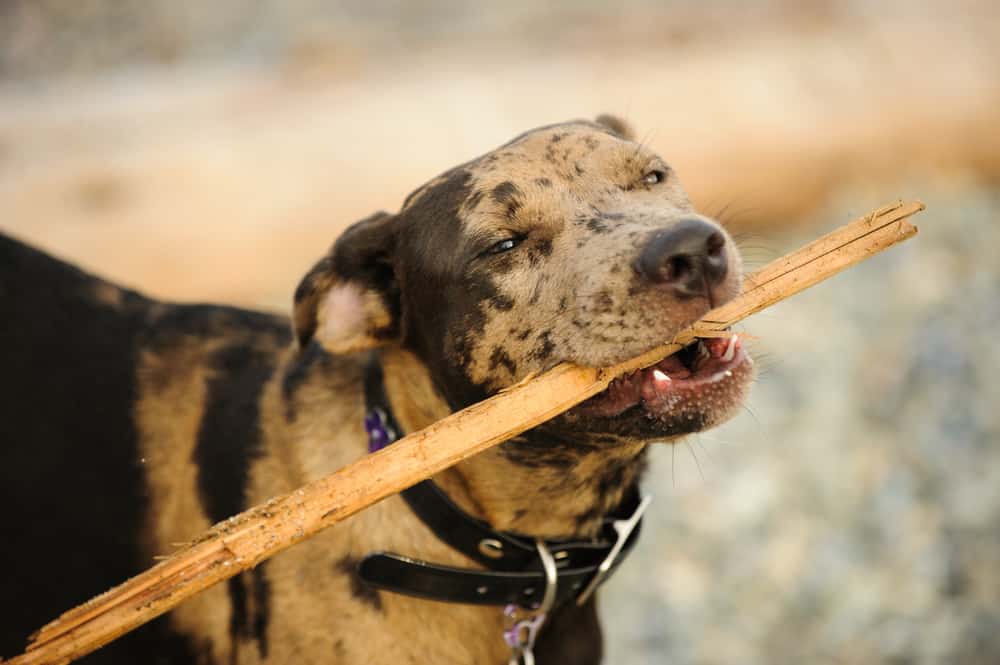 Catahoula Leopard Dogs tend to quickly attach their family. They would want their family’s love and affection almost all of the time.

If they feel that they’re being left alone, they may cry or howl. If not properly taken care of, a moderate chance of experiencing separation anxiety may occur.

Deafness is one of the major genetic faults among Catahoulas. It attributes to a lack of melanocytes which is why it is mostly associated with individuals that are excessively white in color.

Puppies that are born from a litter wherein both parents have the merle color pattern have a 25% chance of turning out to be blind, deaf, or both. These puppies are often called “double merles”.

Aside from deafness and blindness, hip dysplasia is dependent on the gene pool and good breeders. According to the Orthopedic Foundation for Animals, roughly 20% of Catahoulas develop hip dysplasia. 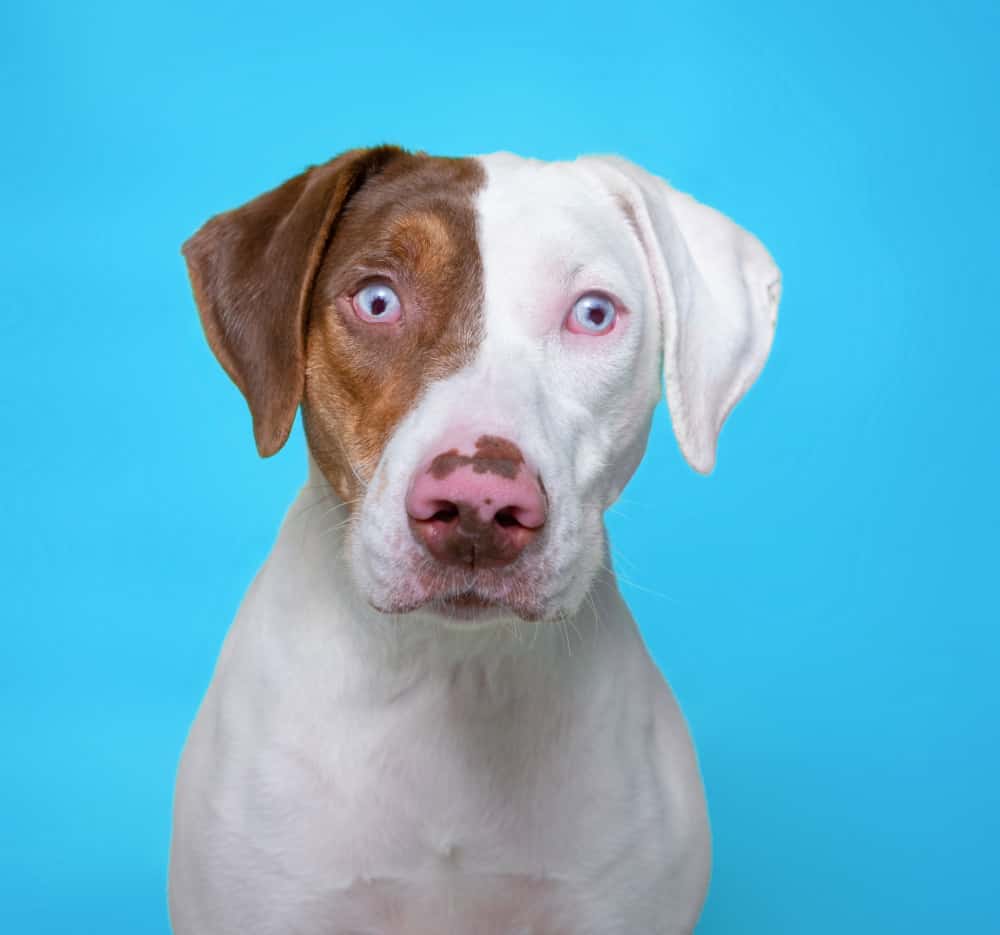