Having the same Poodle parent, the Aussiedoodle and Labradoodle are similar and different in many ways. Despite its name, the Aussiedoodle originated from the U.S. and Canada and is a cross between Australian Shepherd and Poodle. Meanwhile, the Labradoodle originated from Australia and is a cross between Labrador Retriever and Poodle.

The Labradoodle is a single-coated dog with fur that ranges from straight to loose curls. It has three coat types, namely Fleece, Wool, and Hair. The coat is not dense, and the curls shouldn’t be too tight. Their coat colors come in a variety of shades, including apricot, caramel, chalk, gold, black, red, café, cream, silver, chocolate, parchment, and blue, although they can also be particolored. 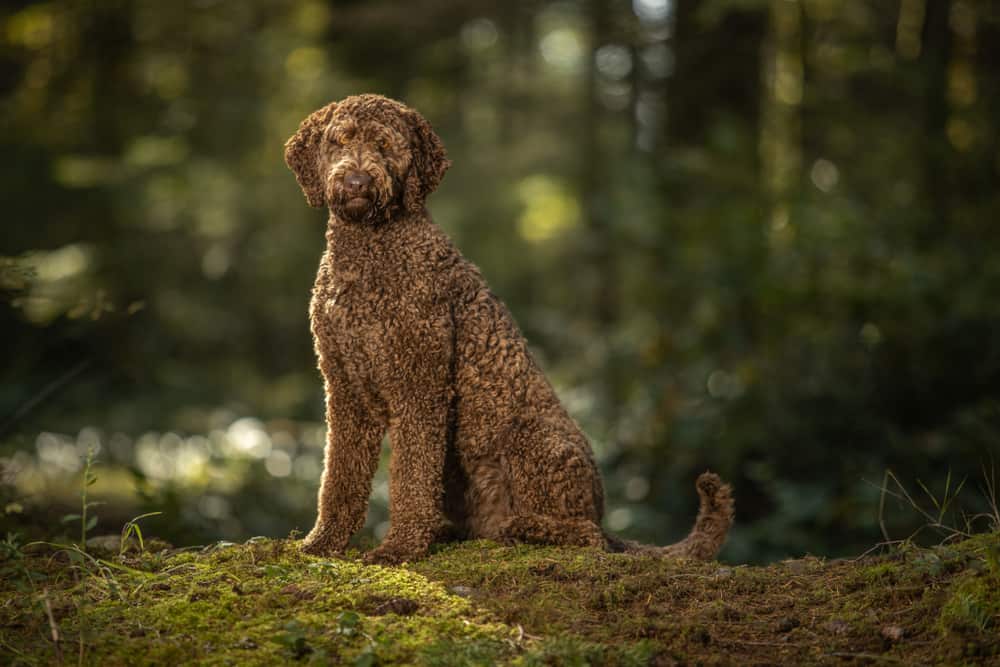 On the other hand, Aussiedoodles come in different textures – some possess waiver hairs, while others have tighter curls. Their coats may be blue merle, red merle, black and red tri, phantom, parti, sable. In some cases, they may also have solid colors. 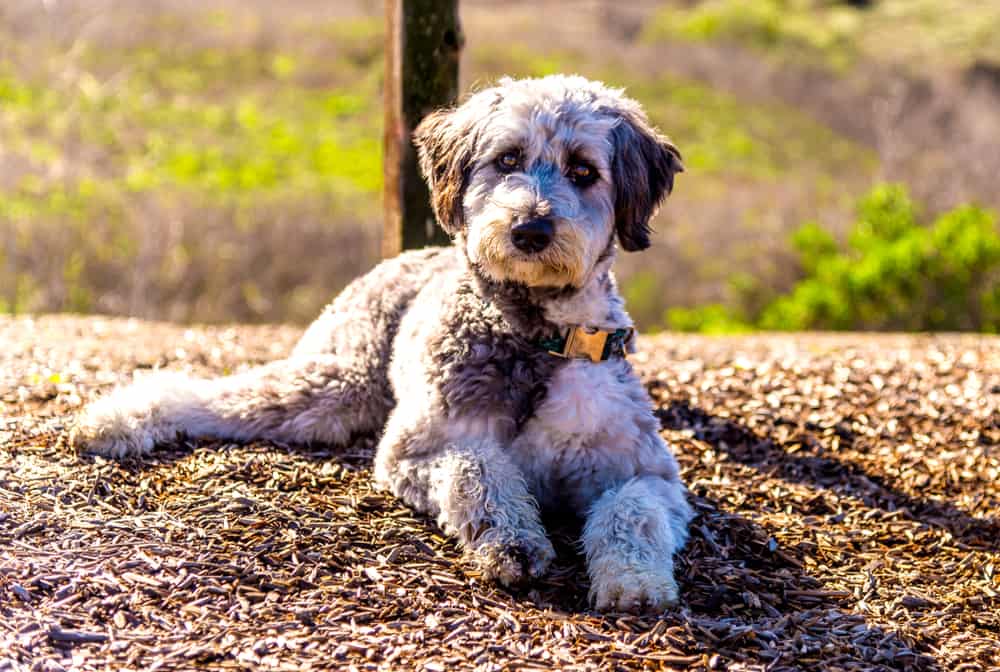 The Aussiedoodle and Labradoodle’s size depends on their Poodle parent which comes in three size categories, namely Standard, Medium, and Miniature. 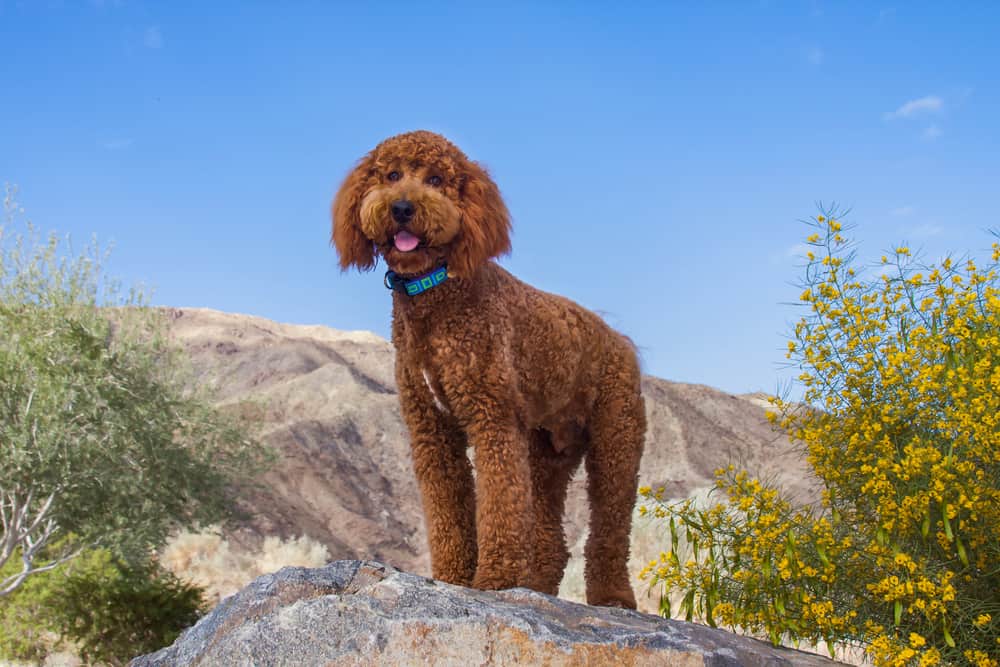 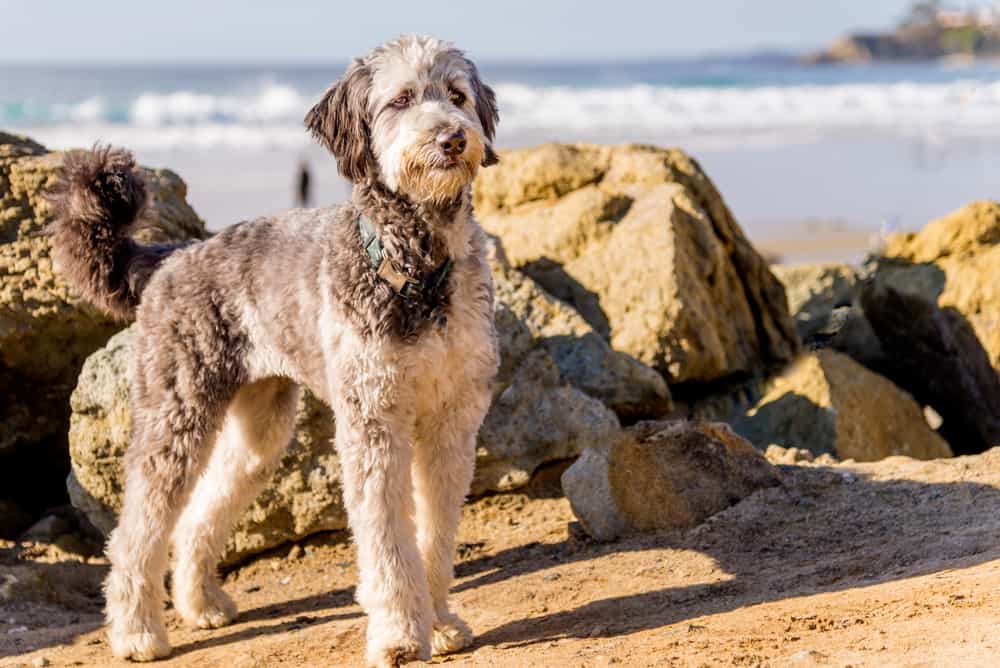 These sizes vary, and they may come out larger or smaller.

Both dogs aren’t considered heavy shedders, thanks to their Poodle parents.

Meanwhile, Aussiedoodles are also considered non- to low shedders. Yes, you may still find some hair after brushing sessions, but they won’t likely be clumped or tangled.

Labradoodles are fun-loving, friendly, and easy-going dogs who show their happiness by jumping and playing. They are not usually aggressive, and would treat almost everyone like their best friends just like their Labrador Retriever parent! This, combined with their intelligence from their Poodle parents gives them an extraordinary instinct to know what their family needs from them, making them excellent service dogs. 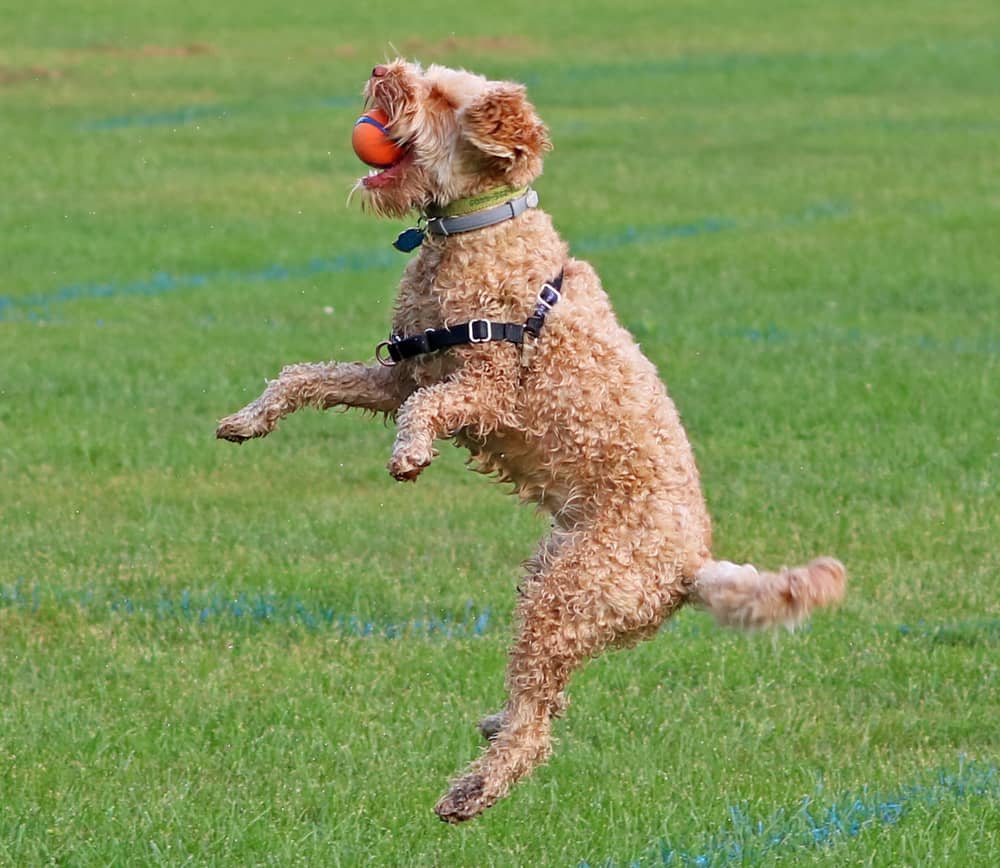 Meanwhile, Aussiedoodles are known for being affectionate and goofy dogs, although they are less pet-friendly compared to Labradoodles due to their herding instinct from their Australian Shepherd parent. They have a tendency to round you and your kids, so make sure they are trained at an early age. Also, they sometimes tend to stick with one or two of their most loved humans, though it doesn’t mean that they won’t get along well with other family members. 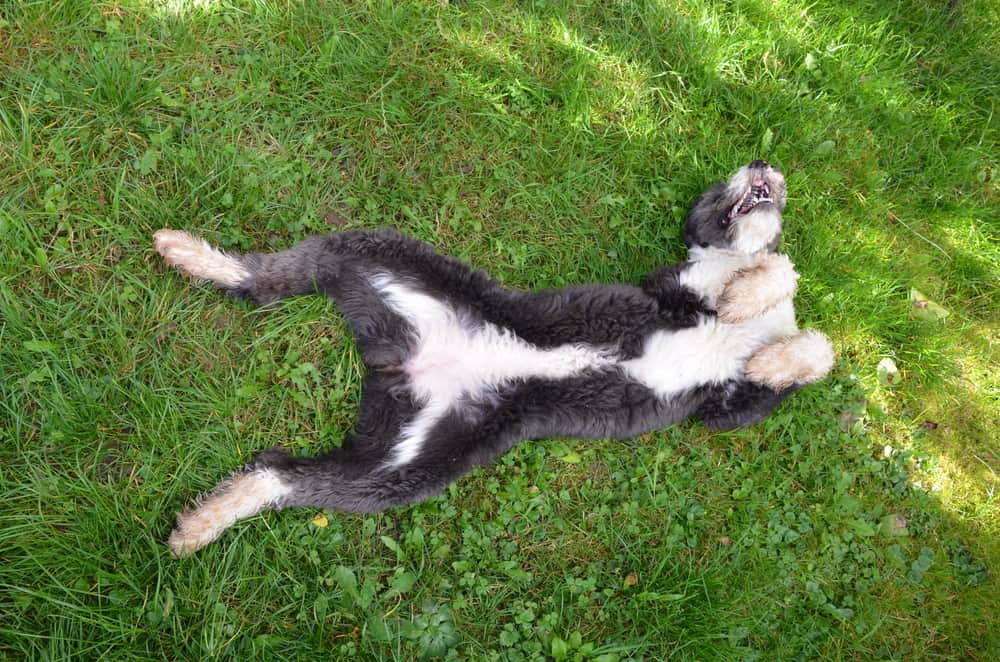 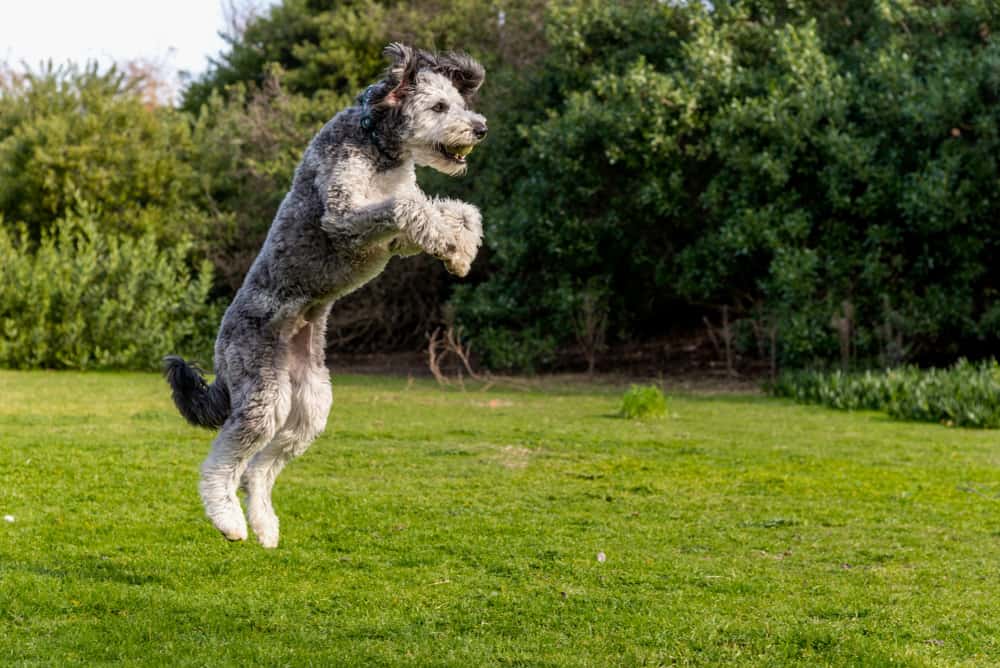 The Labradoodle, on the other hand, is also a highly intelligent dog, thanks to its Poodle and Labrador Retriever parent who tops the ranking of the most intelligent dog breed in the world. 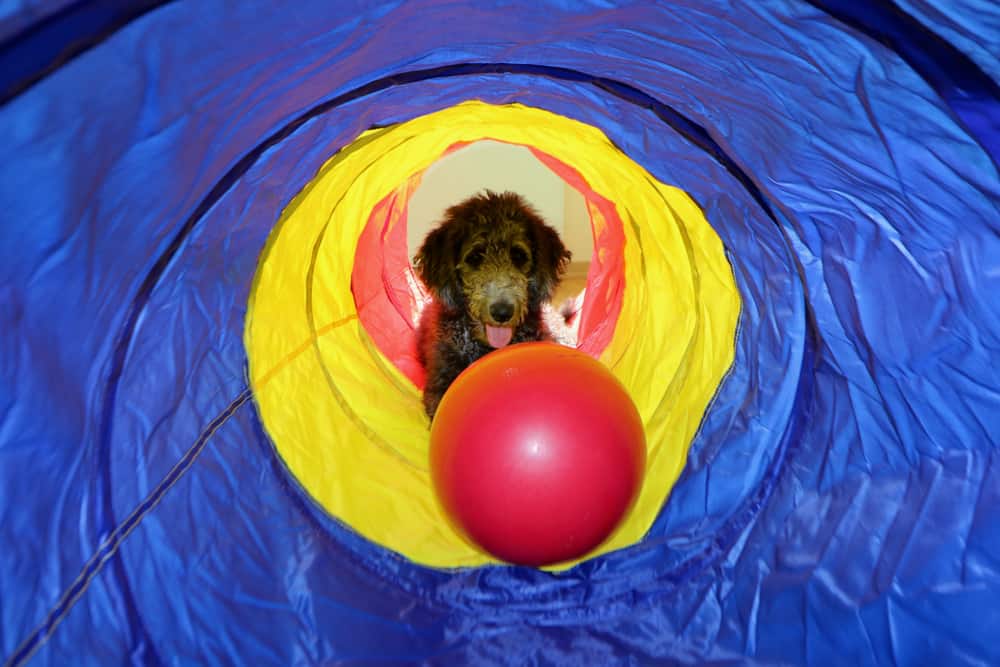 That said, these two smart dog breeds need a lot of mental stimulation, otherwise, they can get bored and develop undesirable behaviors, such as chewing, digging, and barking.

Regardless of their size, Aussiedoodles are born with high energy levels. That said, they need a large number of activity levels to keep them occupied, such as long hikes, play sessions at the beach, and retrieval games. 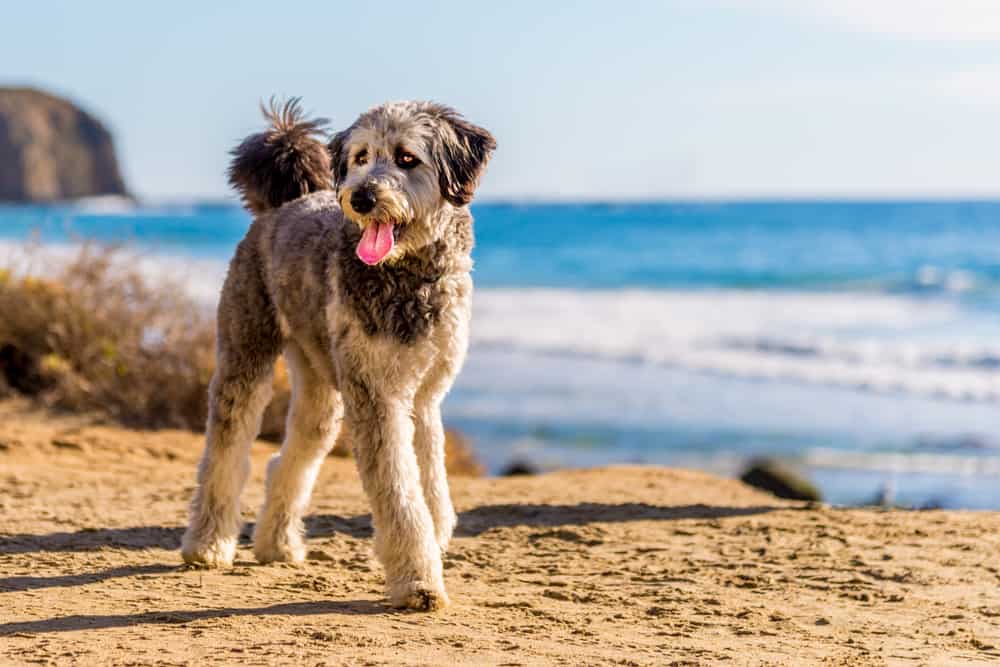 Labradoodles also need some time to burn off their energies. Aside from making an excellent jogging companion, it is recommended to keep them off-leash so they can freely run around and play. 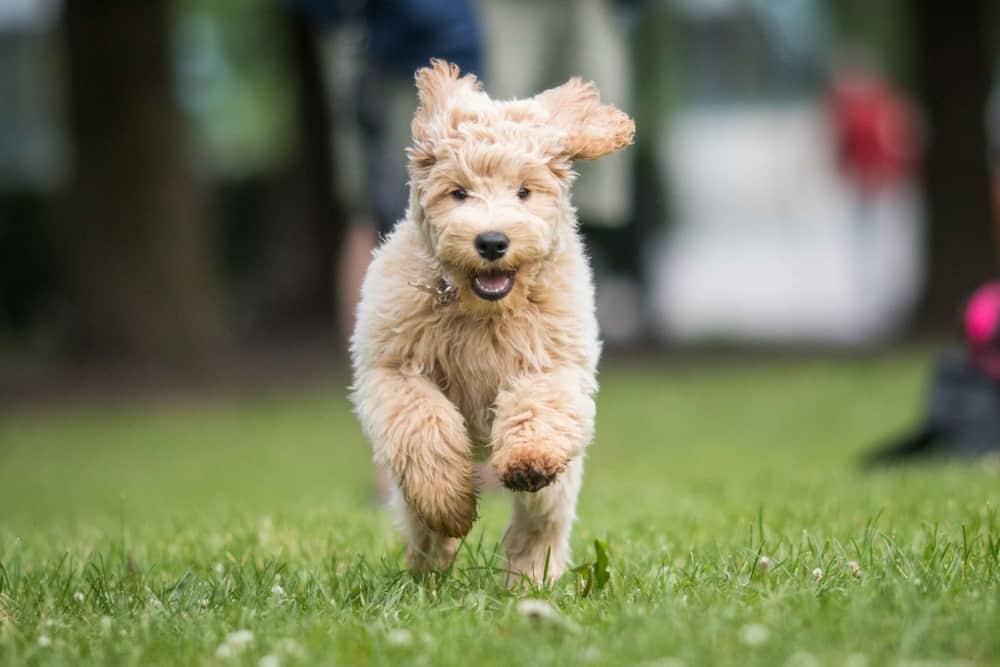 Being smart dogs, both the Aussiedoodle and Labradoodle are easy to train breeds. Consistency and positive reinforcement methods are needed to make every training session successful.

Labradoodle observes everything that’s happening around him and will respond well to his owner during training sessions. They are eager to please their owners, and can easily be handled even for novice dog owners. They don’t need to have a firm hand, but they need to be trained early in order for them to grow as a well-rounded dog. 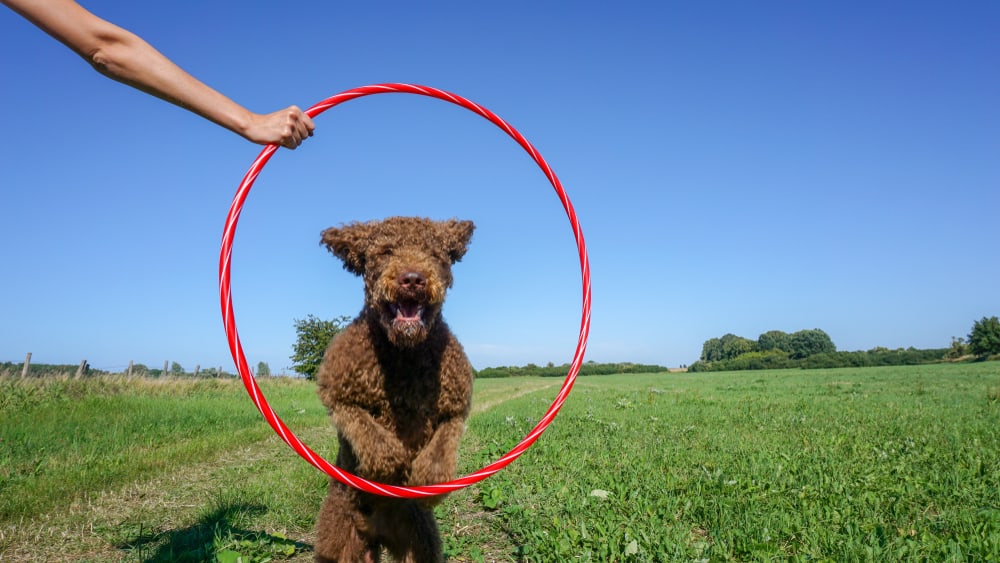 The Aussiedoodle doesn’t need much effort to be trained, as well. Because of their intelligence, training should be more of a pleasure than a challenge. Like the Labradoodle, they are eager to learn and would learn basic and intermediate commands with just a few repetitions. 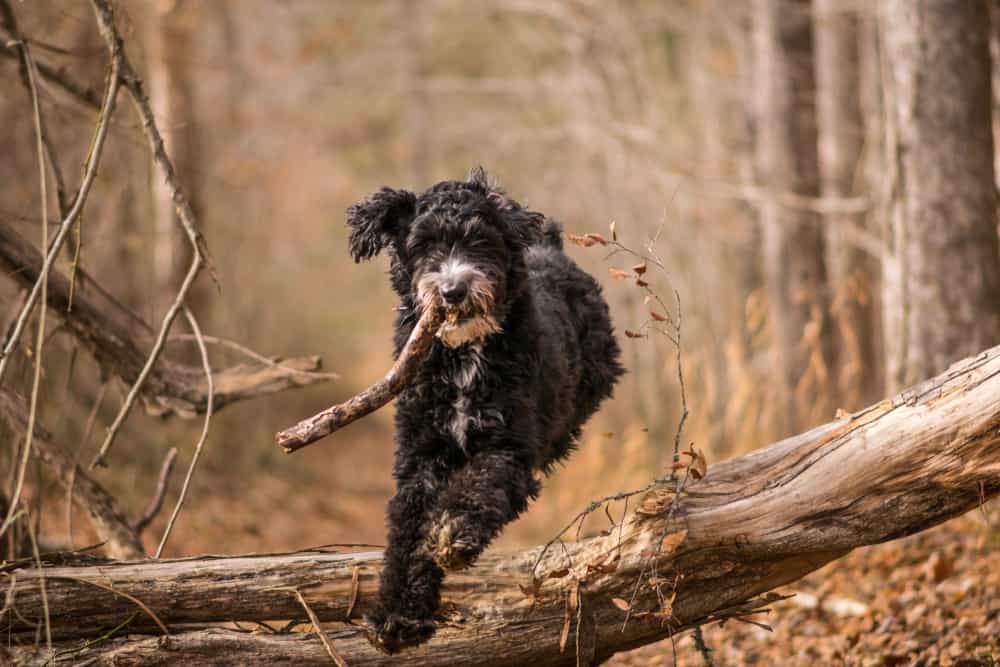 Labradoodles require about 30- to 60-minute daily exercise. It will also be better if they have a large fenced area where they can burn off steam. Those Labradoodles from the first generation may require more exercise. 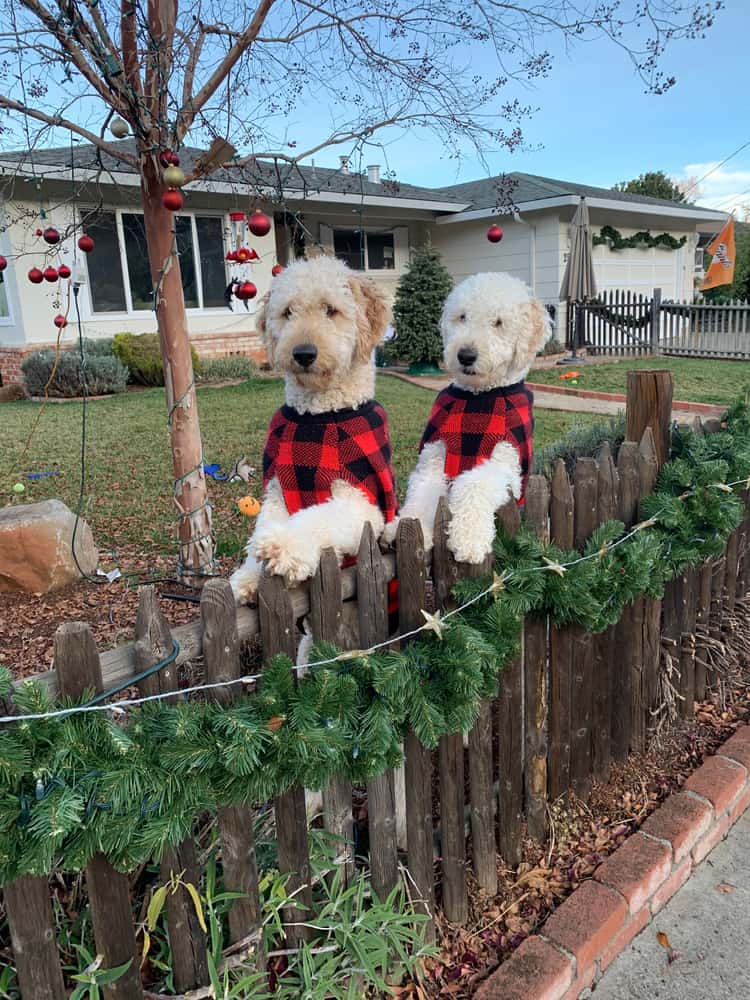 Meanwhile, Aussiedoodles also need 30- to 60-minute exercise along with some play sessions and short walks. They are prone to weight gain, so it is important that they meet their daily physical exercise. 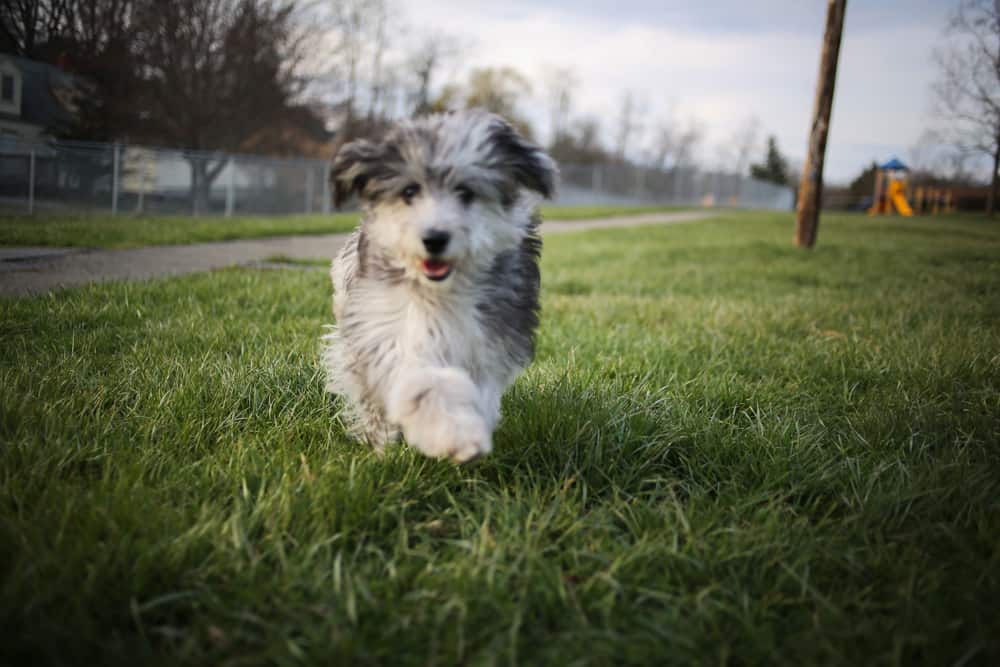 For both Aussiedoodle and Labradoodle, grooming depends on their type of coat. In general, brushing once or twice a week is enough to keep their coats healthy. Some owners opt to have their pet’s coat clipped or trimmed every six to eight weeks for easy maintenance. Because they don’t quickly develop a doggy odor, bathing should only be done when necessary.

Regularly check their ears as well since they are prone to ear infections. Brush their teeth twice or thrice a week to remove the buildup of bacteria. Trim their nails once or twice a month. If you’re unsure how to do it, it is best to seek help from a groomer help.

Because of their playful and goofy nature, Aussiedoodles make great playmates for families with older children. They get along well with other animals in the house if properly introduced. Early socialization plays a big role in how well they adapt to new animals. They are not recommended for families with smaller animals and toddlers, though since they may try to herd them if they are not trained. 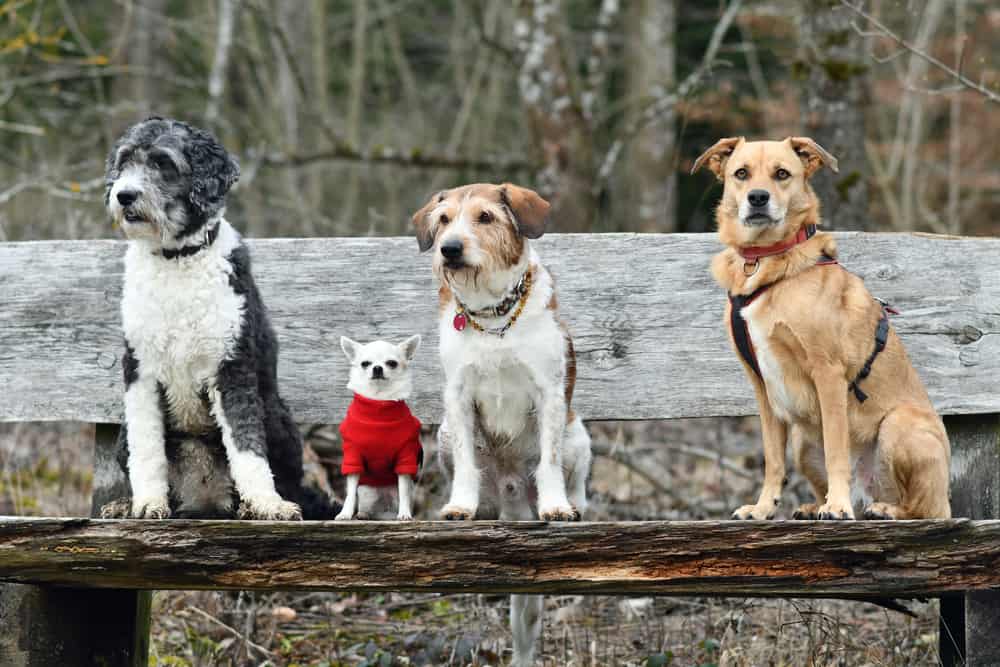 Meanwhile, the energetic and affectionate Labradoodle makes a great companion for any type of family. As with all dogs, interaction with children should be supervised since they may accidentally knock them over. They get along well with other pets, provided that they are socialized early. 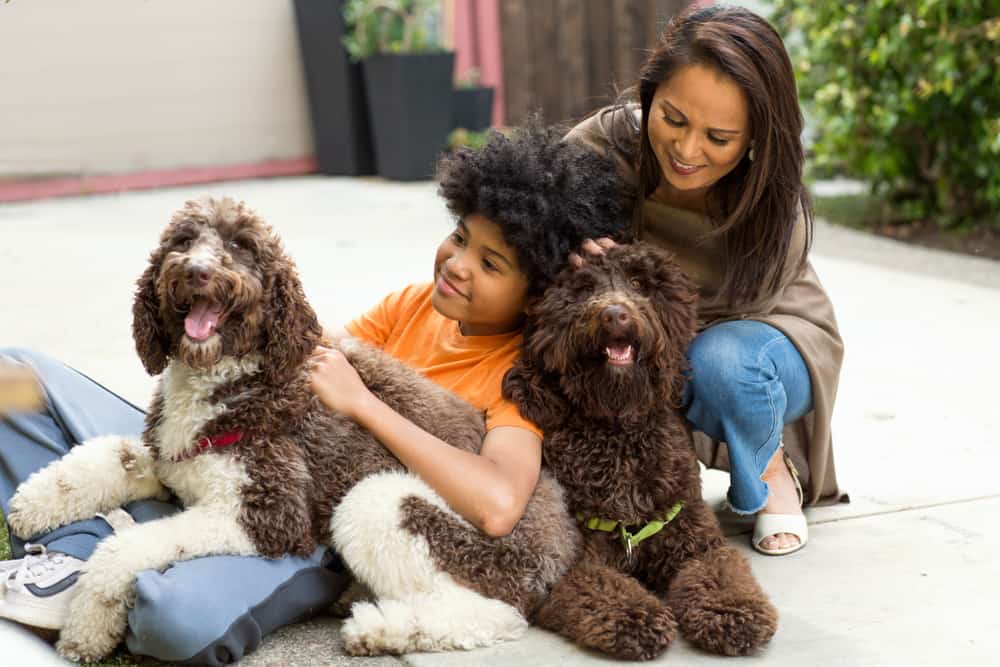 Labradoodles can adjust to any setting, may it be city environments or rural settings. However, they don’t do well in apartments since they need a yard to run around.
Labradoodle is a companion dog and should live indoors, not in the yard. Expect them to sleep comfortably on your feet, or in the space next to yours.

They are also protective and will bark to alarm their owners if there’s someone suspicious. They are fearless and are ready to protect their families from aggressors. 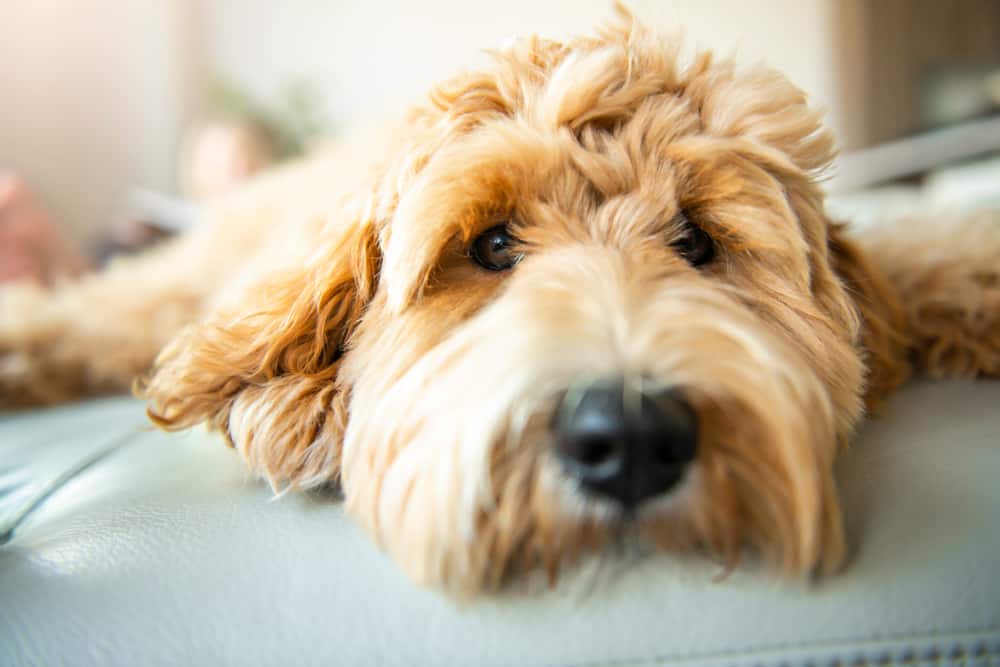 Meanwhile, the Aussiedoodle can adapt to living in apartments and large homes, so long that they have a dedicated space to roam around. Like the Labradoodle, they seek companionship and should not live outdoors.

Don’t expect Aussiedoodles to be protective. They have no aggressive tendencies and are more likely to invite intruders inside than scare them off. Their watchdog ability is low. 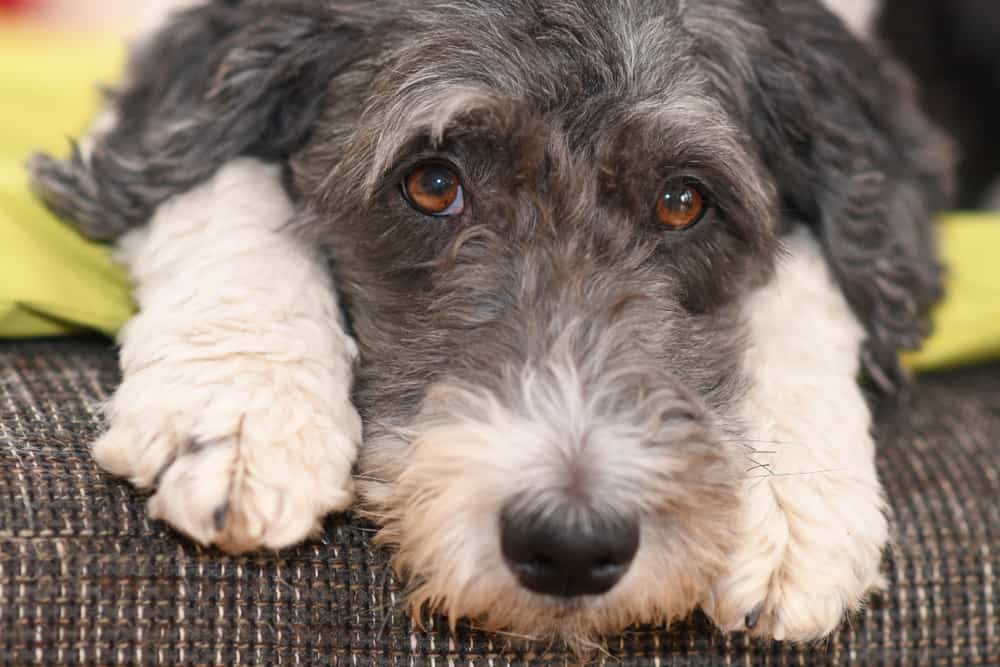 Although cross breeds like Aussiedoodles and Labradoodles are said to be healthier than pure breeds, it is still possible for them to inherit some of the health issues from their parents.