The powerful, mighty Kangal Dogs are usually perceived as terrifying dogs – a common misconception due to their big size.

Put their strength into good use, then Kangal Dogs will be able to protect you from any harm. There’s more about them than just their power, though. We’ll discuss it in this article so make sure to read them until the end.

Kangal Dogs originated from the Kangal District of Sivas Province in Turkey. This is where they also got their name. It is believed that this breed has descended from different mastiff-type dogs.

Kangal Dogs have a rich history as protectors. They were mostly used as a guardian of villagers’, as well as landholders and chieftains’ flocks against wild animals, such as bears, jackals, and wolves.

In 1985, David and Judith Nelson brought the Kangal Dogs to the U.S. In 1998, it was officially recognized by the United Kennel Club.

Today, Kangal Dogs are still used as protectors of land, homes, as well as children. Despite their intimidating appearance, they actually made good companions for older children.

Kangal Dogs are easily spotted from the crowd due to their gigantic size and distinctive silhouette. They have a big head, a black muzzle, a black shading on their floppy ears, and a curled tail.

They have a thick, short coat that is pale tan or fawn in color. Some may have sable coats, but it is unusual to have a coat that is brindle, spotted, or merle. Some may also have white spots on their chest, chin, or toes. 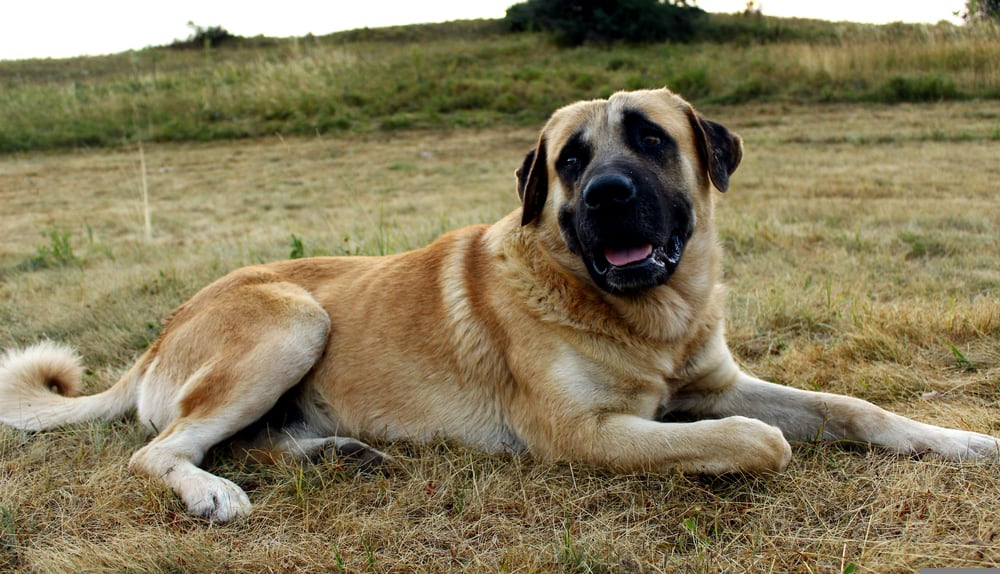 Due to strict breeding standards, the Kangal Dog has retained its appearance, size, and behavior.

Despite the small difference between the male and female’s size, Kangal Dogs can surely scare off wolves and other wild animals! 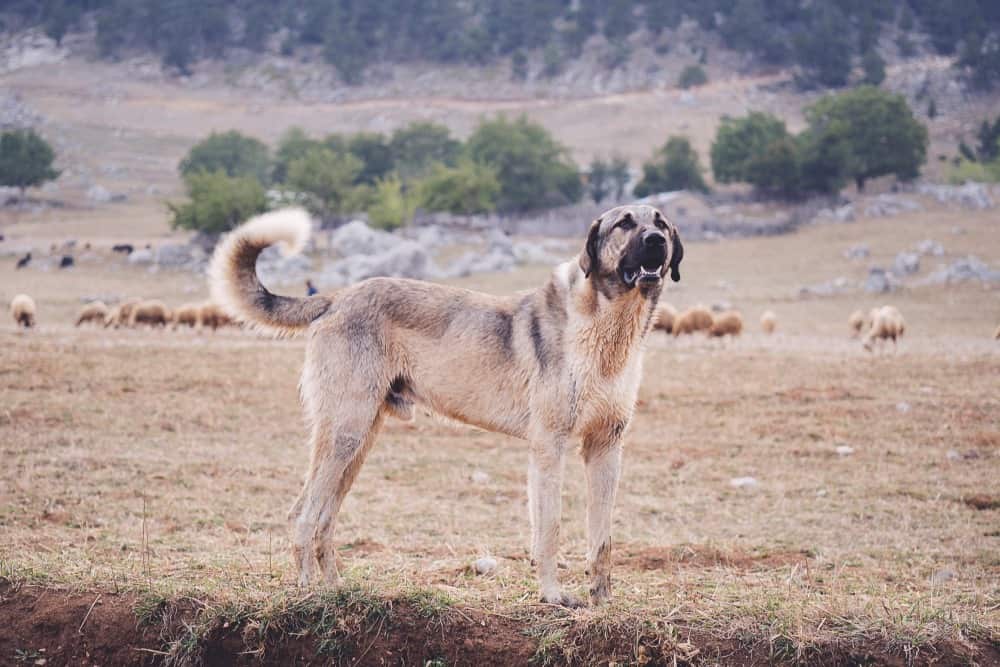 Despite its big size, the Kangal Dog has a long lifespan! It can be your lifelong companion and protector for 12 to 15 years so long as it is properly nurtured and taken care of by its family.

The Kangal Dog’s short and dense coat only sheds during spring and winter. They’re actually easy to groom. Once their shedding season starts, Kangals would need daily brushing with a metal comb. During fall and summer, it is okay to brush them twice per week.

It is also important to keep their natural oils from their body, which means they don’t need frequent bathing – once a month would be enough.

Also, keep in mind that Kangal Dogs have a tendency to drool, it is essential to brush their teeth twice per week.

Kangal Dogs make good guardians and protectors and are ready to attack when they perceive them as a threat. However, they are gentle and affectionate with their families.

At home, expect them to be fully devoted and loyal to you. They are obedient and when properly trained, Kangal may learn to control its desire to attack its enemy. They won’t show aggression unless provoked. Let’s debunk the misconception that Kangal Dogs are extremely dangerous and out of control. They’re more about love and security, rather than aggression.

Sadly, their strength makes them an ideal competitor for illegal activities, such as dogfighting. This may be one of the reasons why Kangals, which are trained for such activities, tend to be aggressive even around humans. But just like with humans, dogs develop such behavior depending on the environment they were brought up in.

If well taken care of and properly trained, Kangal Dogs make good protectors, as well as loving companions even at homes with children. 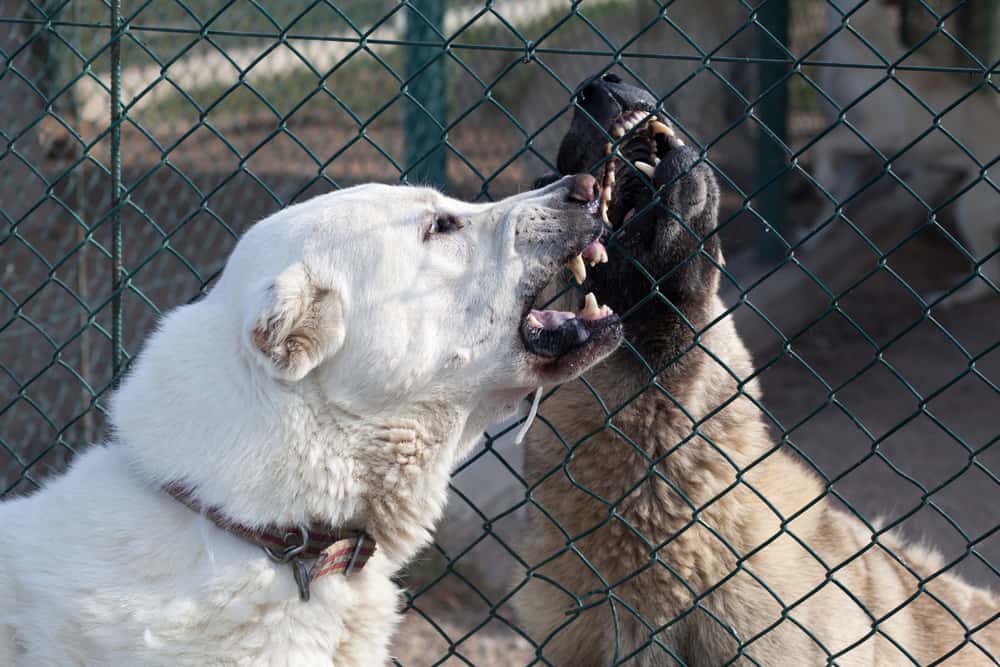 The Kangal Dog is an intelligent and highly trainable breed, that’s why they make excellent protectors in the first place. They know when to calm down when to intimidate someone threatening, or when to attack an enemy to protect his family. 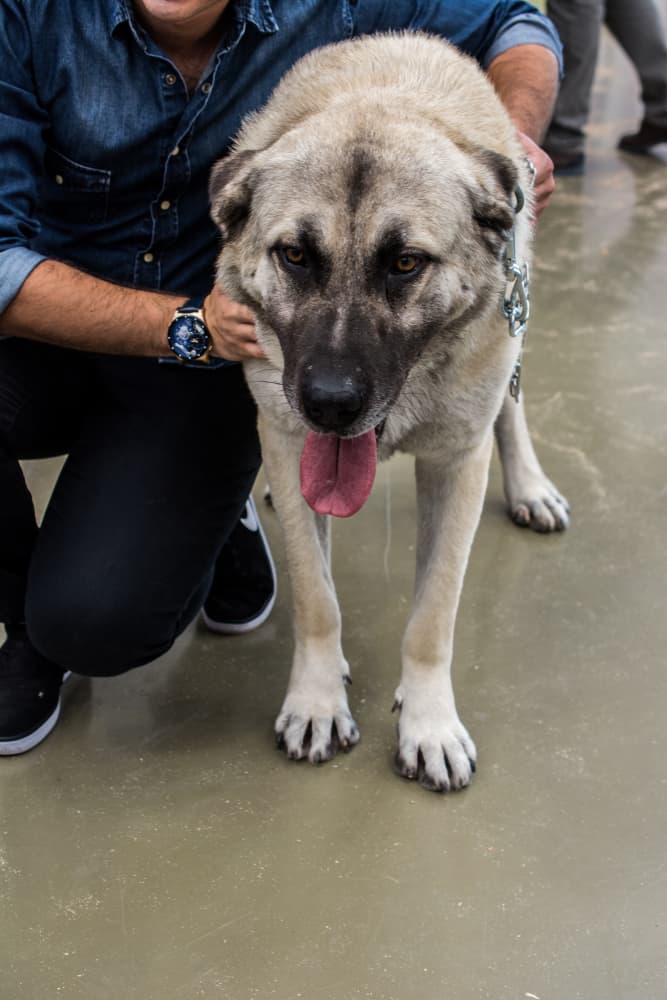 You will rarely see the Kangal Dog lazing around. They are more athletic and agile compared to the breed of their size. They are vigilant and wary of their surroundings and are always ready to attack when faced with enemies.

When they work on a farm, Kangal Dogs may use a three-phase approach to a wild animal who intrudes their flock: Phase 1 is Barking to warn the enemy; Phase 2 is Roaring which means the Kangal Dog is open to fighting if the enemy persists; Phase 3 is Attacking or Defending when the enemy continues to approach. The Kangal Dog is willing to do what it takes to protect its flocks and territory. 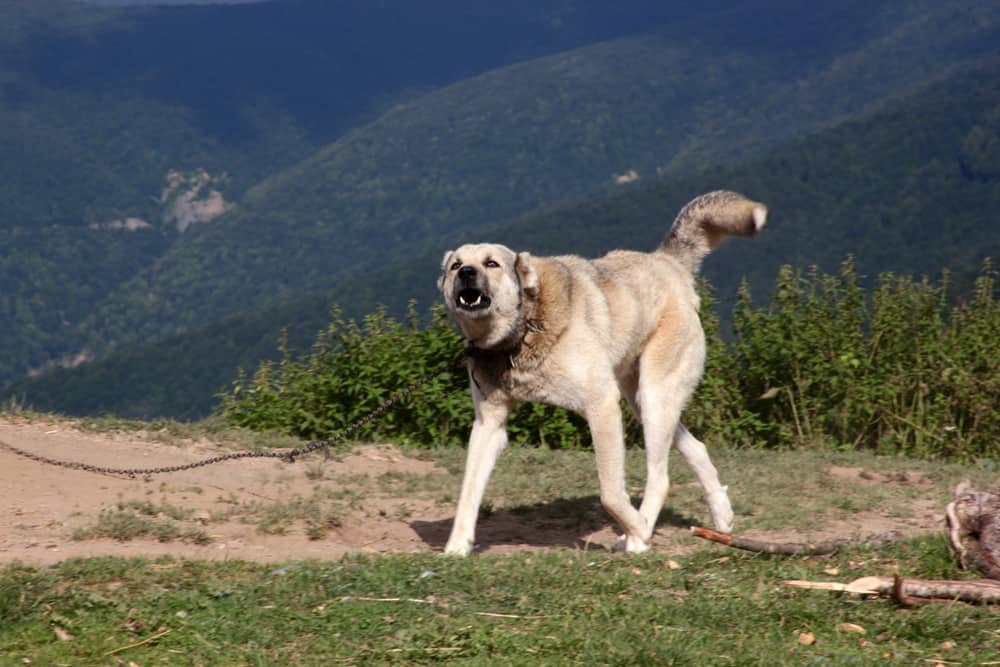 Due to its gigantic size and working ability, the Kangal Dog needs plenty of regular exercises. If you keep them as a working dog, which they love, their job would usually be enough to meet their needs. But if you decide to keep them as companions, you will need to provide them with an hour of daily walks or play sessions.

They also need mental stimulation and if not provided, it will result in boredom and anxiety, which then leads to the development of destructive behaviors. 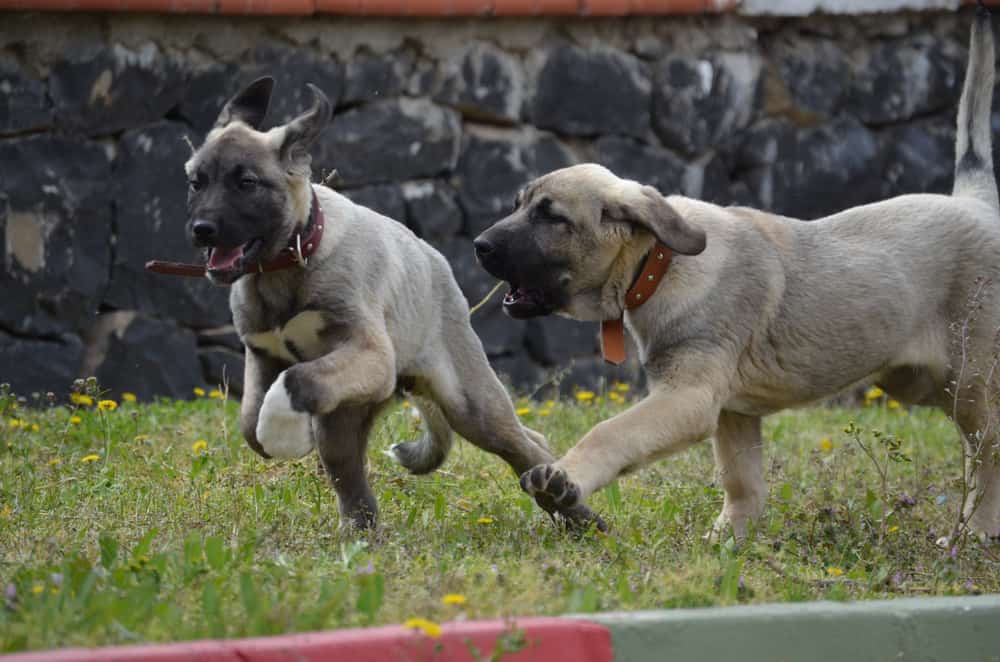 Training Kangal Dogs should start early. They need to know that you are the pack leader so that they’ll follow your commands as they grow older. As early as 2 years old, Kangal Dogs may develop an independent personality and this is bad if they’re not properly trained since they won’t listen to you, and will act on their own.

Kangals grow to be powerful dogs, which means they need an experienced, firm, and consistent owner who knows how to handle their size and put their abilities to good use.
Train them to be friendly towards strangers, it won’t affect their ability to be good protectors. Rather, it will teach them how to act around people. They should also be given rewards when they stay calm and cool, while aggression should highly be discouraged. 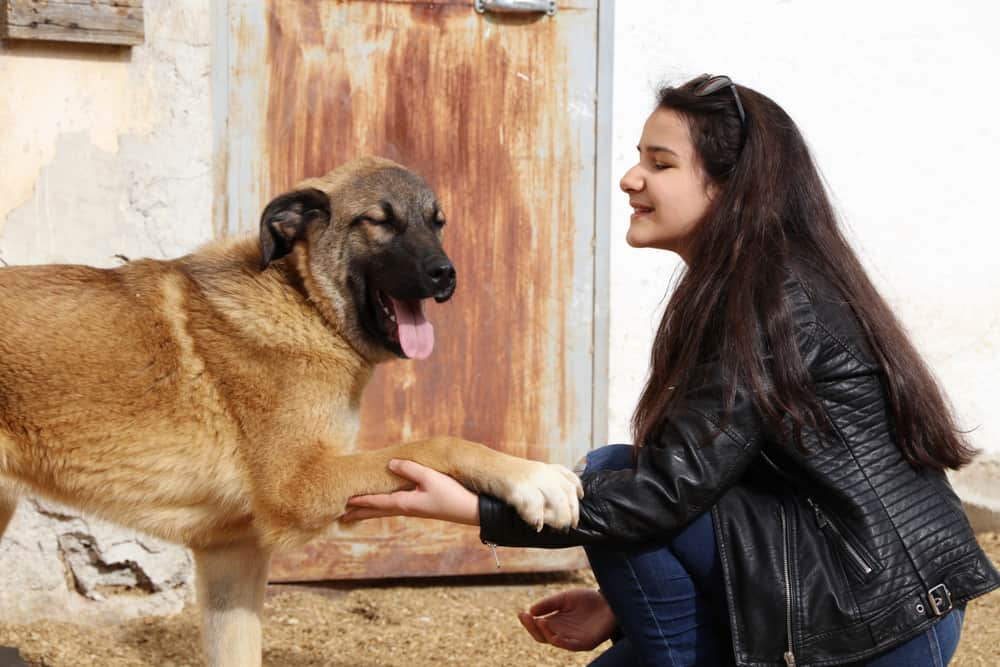 These gentle giants are known to be protective of their packs, which means they won’t be aggressive to their human family, even to children. In fact, they are affectionate and peaceful when surrounded by people they trust. They are strong and patient with children, and won’t mind having them climb on their big bodies.

Not only are they good playmates for children, but they also protect and watch over them. They also protect something that’s important for their family and that includes your territory and livestock if you have any. They are always ready to attack any intruders or burglars that will come into your house. 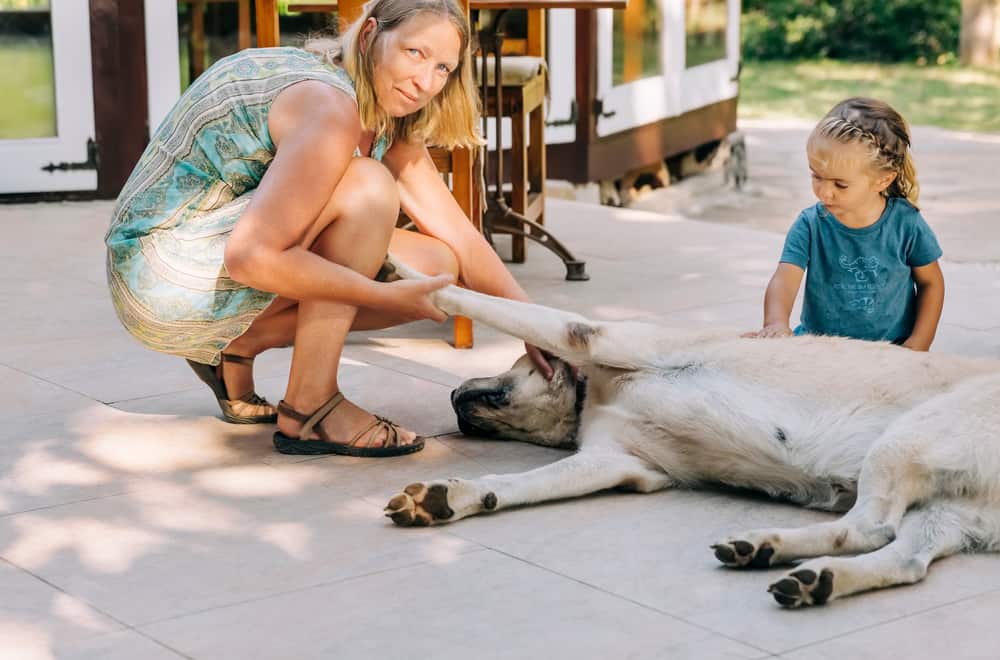 Kangal Dogs need a space to roam around and run. They do not thrive in contained areas, such as condos and apartments. A home with a large, fenced backyard is the best environment for Kangal Dogs. They are also territorial and would enjoy being given an area for them to protect.

In addition, Kangal Dogs are not barkers. They only bark when needed, such as when they perceive something or someone as a threat. 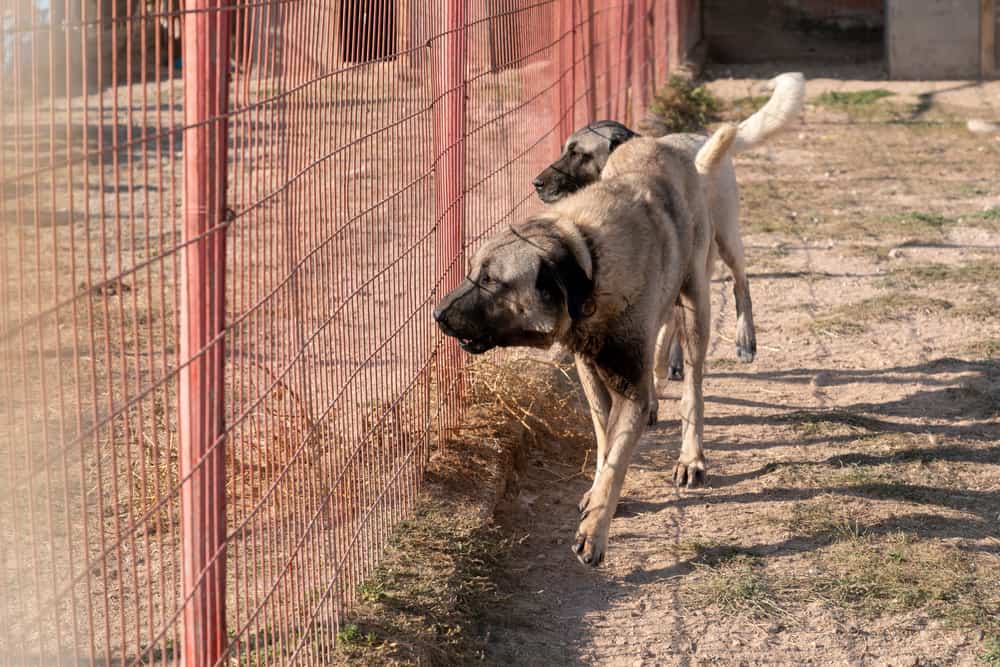 Kangal Dogs need to be around their human family. If you need to be away for a while, make sure to provide them with toys to keep them entertained. If a Kangal Dog gets bored, it may develop destructive behaviors, such as chewing, barking, and digging, and later on, separation anxiety. 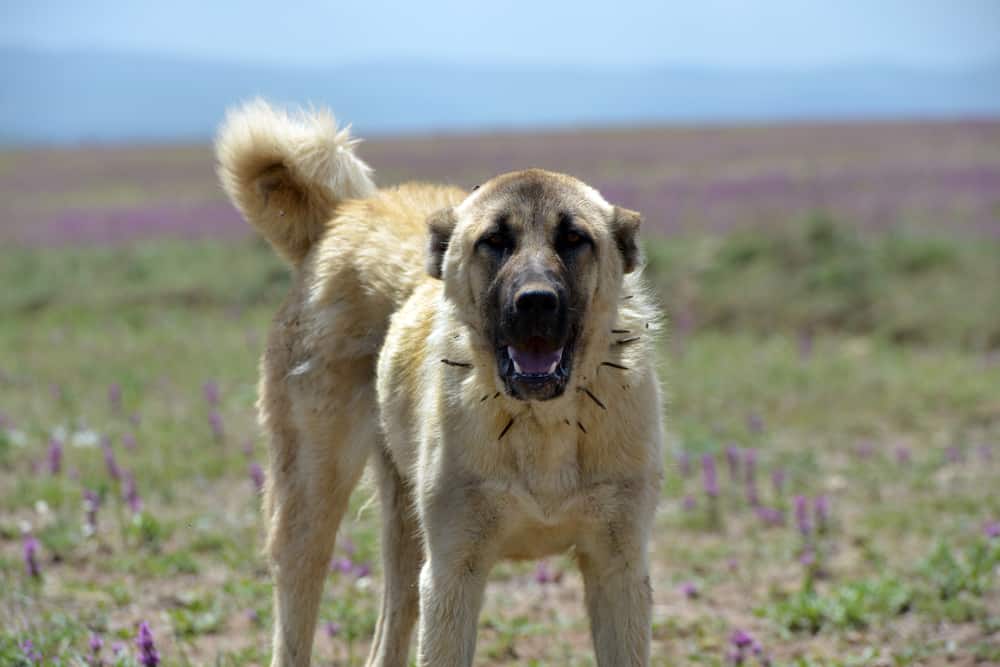 Kangal Dogs are one of the strongest and healthiest dog breeds out there. They are known to have only a few health conditions, such as hip dysplasia which is common to dogs of their size, lipoma, and entropion.

These health issues can easily be determined through regular vet check-ups.