The Cavalier King Charles Spaniel, or Cavalier for short, is an attractive canine under the toy group. They excel at two things, that is being a gentle and loving companion, and as a tough competitor at dog sports. But if we have a “tail-wagging” competition, surely they’ve won every show.

The Cavalier King Charles Spaniel is a new breed that was redeveloped less than a hundred years ago. It came from toy spaniels depicted in various 16th, 17th, and 18th-century paintings by well-known artists, including Van Dyke and Gainsborough.

Cavaliers was bred as a companion. However, they were also used to attract fleas and save their owners from the flea-transmitted bubonic plague.

During the Stuarts period, this breed was declared the royal title of King Charles spaniel. It is said that King Charles II was hardly ever seen without two to three Cavaliers with him. As a matter of fact, he wrote a decree – which is still effective today – for the Cavaliers to be allowed in any public places, including the House of Parliament, where animals are forbidden.

By the year 1996, the Cavalier King Charles Spaniel was officially recognized by the American Kennel Club.

Cavaliers have sleek, slightly wavy, medium-length coats that are soft to the touch. Their big, round, dark brown eyes give a pleasant, adorable expression that melts everyone’s heart. Cavaliers are one of the biggest toy breeds, yet their body still remains compact, and the chest is deep. Their tails move cheerfully when in motion.

Cavaliers come in four distinct colors, which are: Blenheim, tricolor, black and tan, and ruby. Among these four, Blenheim is the most common color, though the others are not rare. 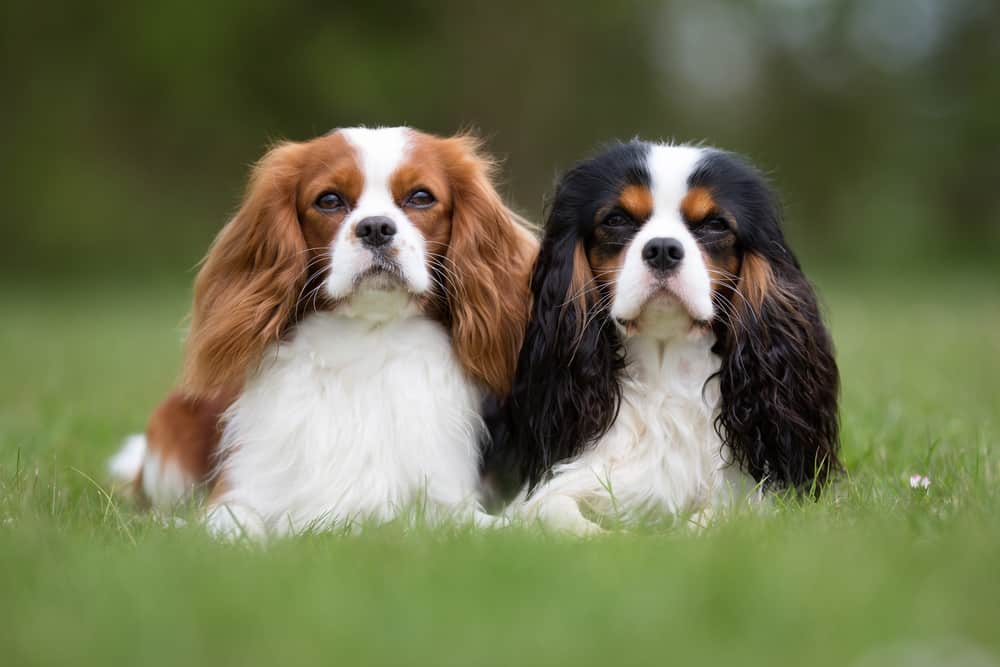 The average Cavalier stands between 12 to 13 inches at the shoulder. Their weight is around 13 to 18 pounds, which is proportionate to their height. However, some dogs may be larger or smaller than the standard size. 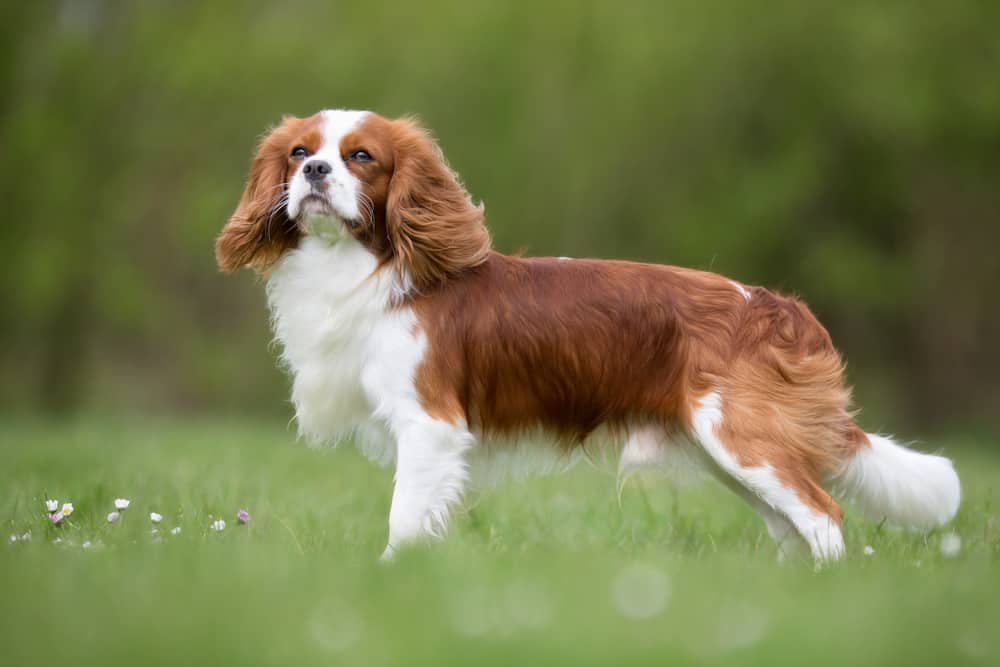 The Cavalier King Charles Spaniel is considered a healthy breed. Its average life expectancy is between 9 to 14 years. To prolong the life of your dog, you need to provide him with regular check-ups, as well as proper diet and exercise.

Cavaliers are average shedders, yet they are relatively easy to maintain. They will shed especially during the spring and fall. However, they won’t need trimming or clipping. Just a regular brushing three to four times a week is enough to keep their coat in its best condition.

There are some parts that are prone to tanglings, such as the feathered hair on the ears and legs. You might need to check these areas regularly if there are mats formed, and gently comb them with a brush.

Some owners like to trim their feet’s hair to make it neat and tidy, although this is not necessary. Baths are only done when necessary. 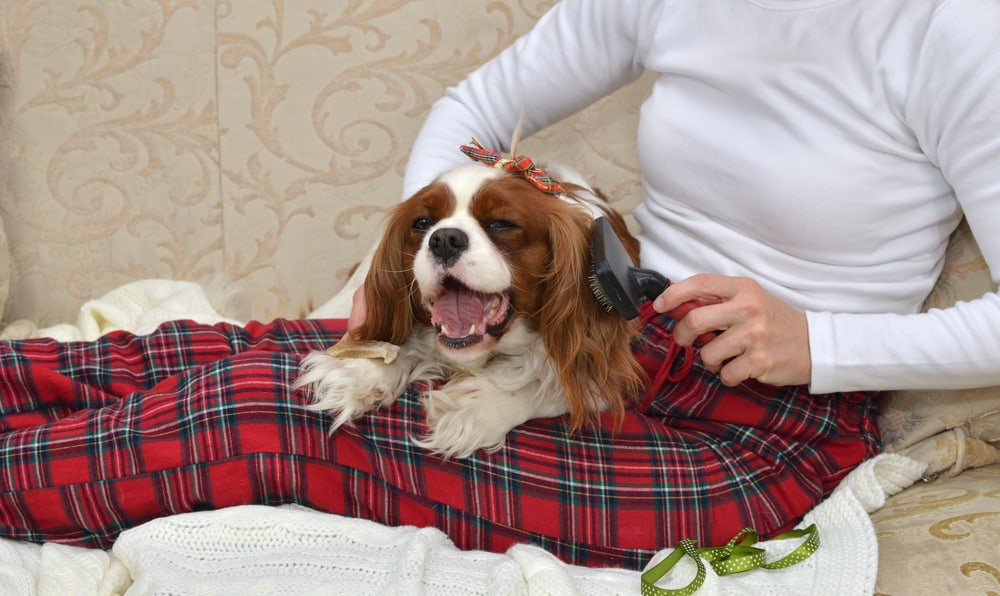 Cavaliers are devoted and loving dogs. Although they are bred as a companion, they can also excel at canine sports and other vigorous activities, thanks to their spaniel ancestors.
From its expressive, large eyes to its cute wagging tail, it’s hard not to fall in love with the Cavalier Charles King Spaniel. When you decide to own one, expect to have a “shadow” friend. They’ll follow you everywhere – even in the bathroom.

They’re also very welcoming, treating everyone as their long-time friend, although they may still bark to alert you at unwanted strangers. 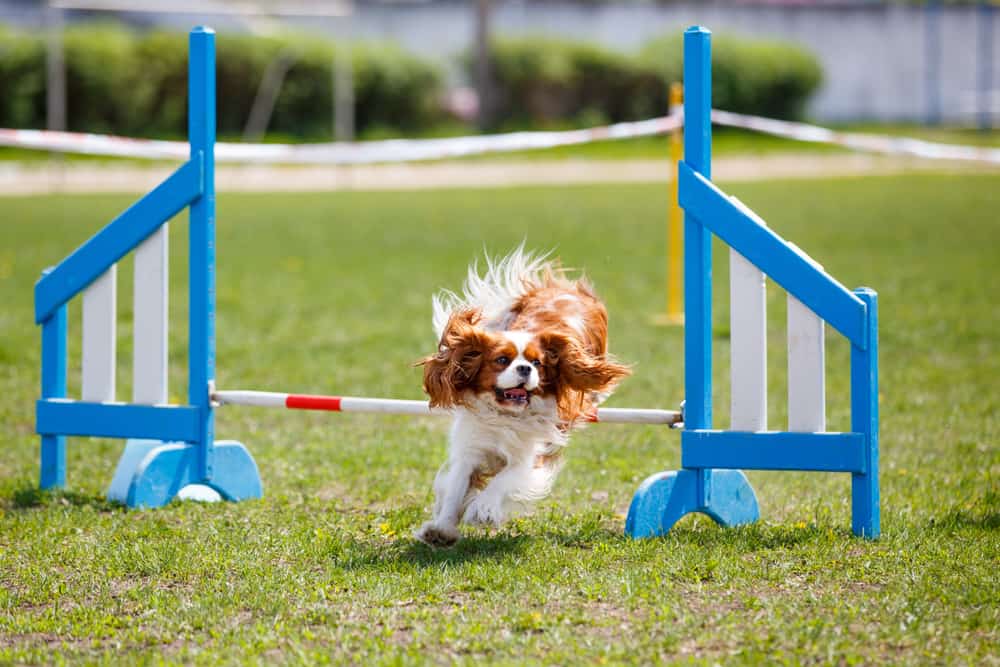 According to Stanley Coren’s book, The Intelligence of Dogs, Cavaliers ranked 44th out of 131 breeds. They have an “average” intelligence in working or obedience areas, making them excellent canine competitors. They also make successful therapy and service dogs due to their adoring and gentle personality. 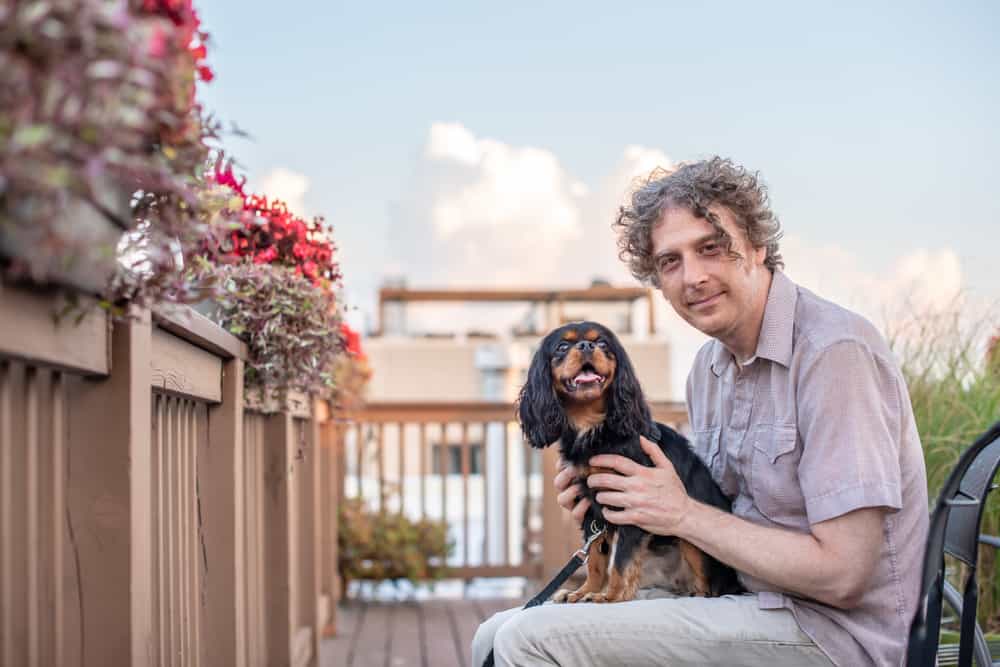 Inside the compact size, the body is an athletic, sturdy build. Cavaliers love to hike and to run on the yard or the beach. They’re also superb at canine sports, such as agility, flyball, and rally. Some may even show skills as a hunting dog! 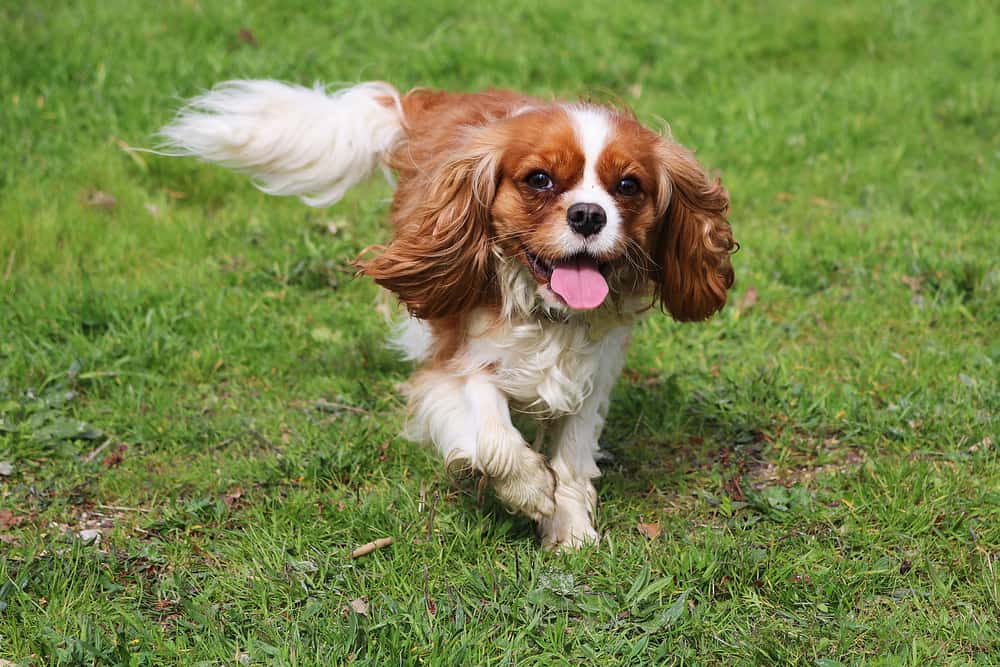 Having descended from sporting dogs, Cavaliers need moderate amounts of physical exercise. A daily walk, along with a fun, outdoor activity is a great start.

However, this breed should not be walked off-leash. They are not street smarts and their instinct to chase off smaller animals could lead to dangerous situations if they’re not leashed. If you have a yard, make sure to put up a secured fence. Avoid walking him at the hottest time of the day, and always keep cool, fresh water for your Cavalier.

Nevertheless, Cavaliers would enjoy sitting on your lap or staying with you on the sofa all day. 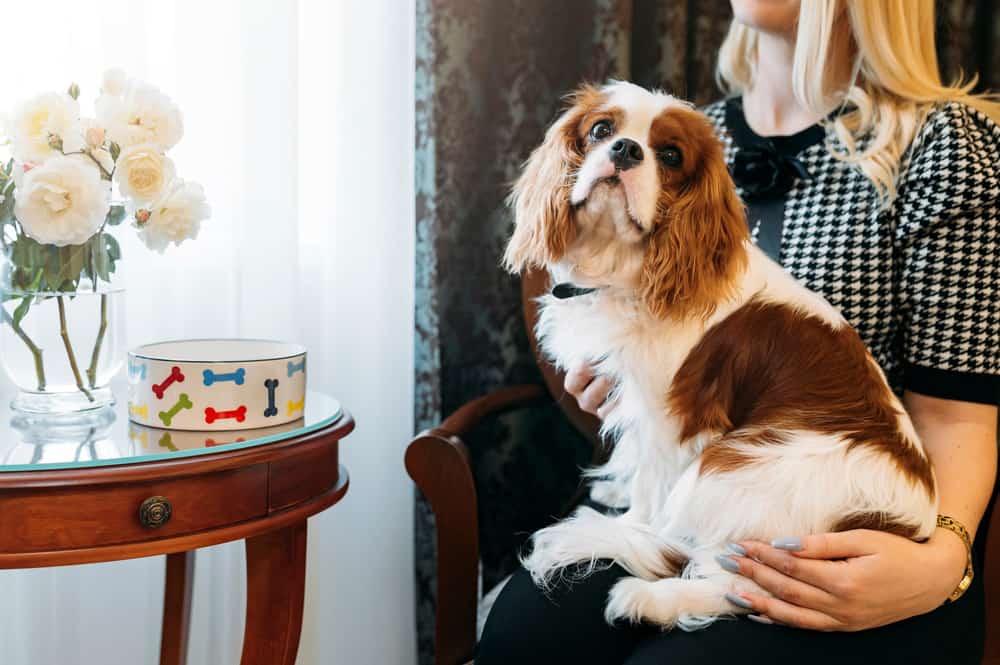 Cavaliers are obedient dogs and are eager to please their owners. Training would be uncomplicated as long as food rewards, praises, and other positive reinforcement tactics are used.

Dogs of this breed are tenderhearted, so make sure not to use harsh punishments such as yelling and hitting as it’ll only lower their self-esteem. Rather, give them rewards if they did something good. They’re likely to do it again if they saw you happy with it. 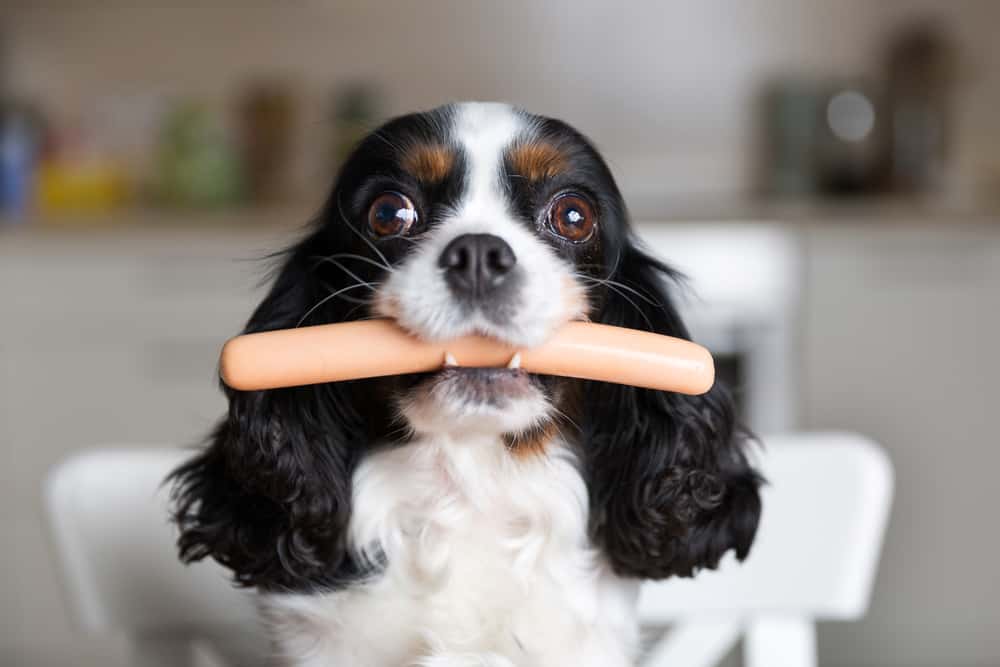 Because of their sweet, gentle, and affectionate nature, Cavaliers make good family pets. The fact that they’re athletic makes them marvelous playmates for children, especially those who love to do fun activities with them. As always, children should learn how to treat dogs properly.

When it comes to other animals in the house, Cavaliers can get along with other canines. They are also capable of playing gently with cats, especially if raised together. When it comes to smaller pets, such as birds or rabbits, make sure to have someone to look out for since Cavaliers have strong hunting instincts. 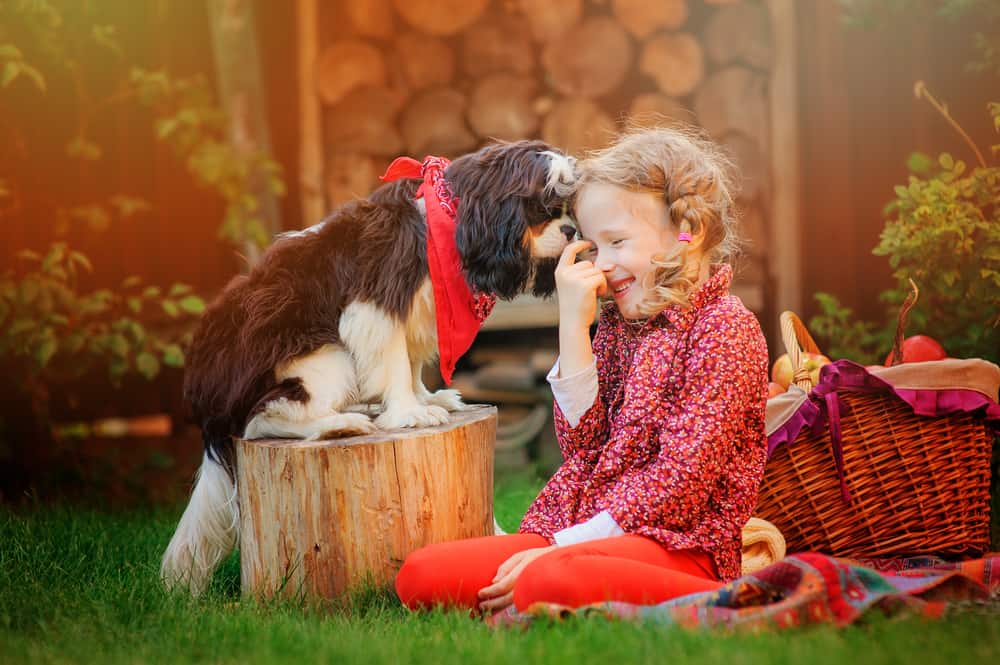 Because of the Cavaliers’ small size, they can be great companions even for apartment dwellers. They are considered quiet dogs and would love to lay with you on the sofa most of the day. But, it is still important to meet their physical needs in order to stay healthy.

Cavaliers need to be in the company of their human family. They are house dogs and should be kept indoors, not in the yard or the kennel.

Cavaliers are friendly dogs. They may bark at strangers outside your door to alert you, but they aren’t great protectors. 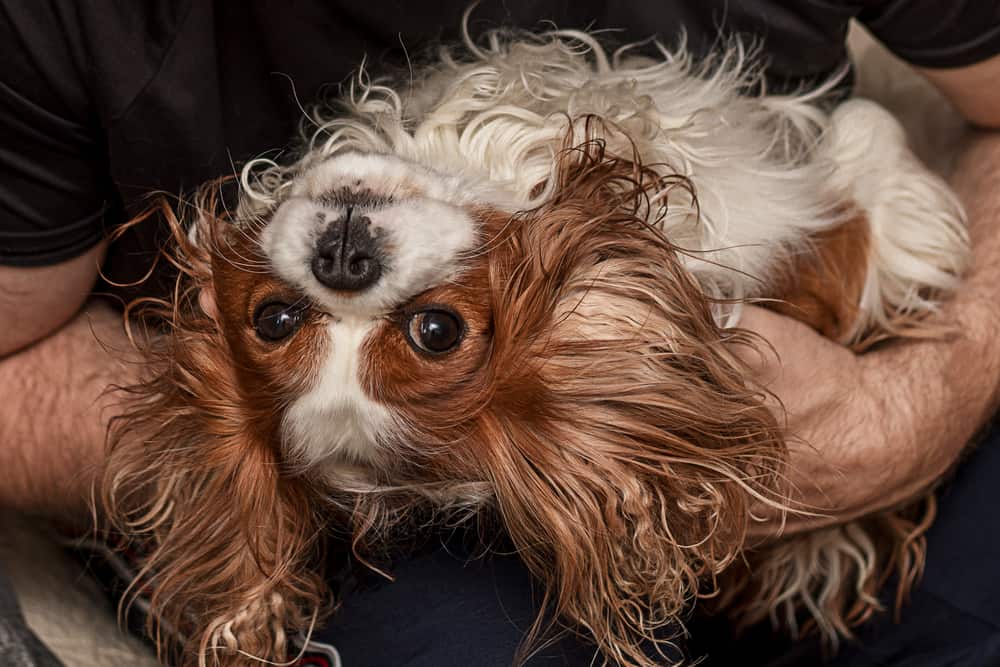 The Cavalier King Charles Spaniel are bred to be companion dogs. They are dependent on their family and should always stay with them. If left alone for long periods of time, Cavaliers may develop separation anxiety.

Although generally healthy, Cavaliers are prone to several health conditions, such as eye diseases, patella luxation, hip dysplasia, middle ear infections, mitral valve heart disease which can lead to heart failure, syringomyelia, and skin allergies. Check with your veterinarian regularly if any symptoms occur to prolong your dog’s life and have him live a joyful and healthy life. 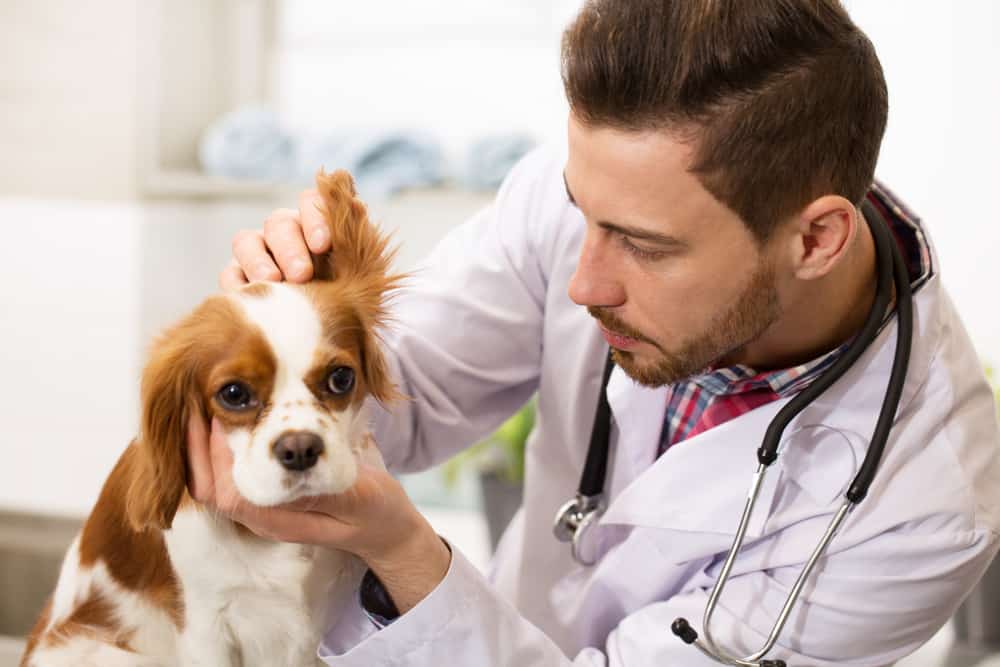