The Shetland Sheepdog, or Sheltie, used to be a Scottish farmer’s best friend. They herd sheep, fend off birds and other animals from the garden, and alert their owner from intruders. Today, they are known to be superstars in canine sports, yet they also make the best family companion.

The Sheltie originated from the island between Scotland and Norway – the Shetland Islands. Farmers crossed the Border Collie with smaller types of dogs, resulting in the creation of Shelties. They used to be known as Shetland Collie, or “Toonie” – a Norwegian word for “farm.” Indeed, they were bred to herd and protect the flocks of Shetland Sheeps of the island.

The Sheltie was first brought to England and Scotland in the early 1800s. However, the farmers on the Shetland Islands continue breeding Shelties to smaller and fluffier types of dogs. In the 19th century, the original type of Sheltie was unrecognizable due to excessive crossbreeding.

England’s Kennel Club finally recognized the breed in 1909. After two years, the first Sheltie was registered in the American Kennel Club. However, there were protests on the name of the breed, so it was changed to Shetland Sheepdogs or Sheltie.
The varied appearances and sizes of Shelties aroused controversies in Great Britain and the U.S. In 1930, both the Scottish and English clubs agreed that Shelties should resemble a mini Collie.

In the 1970s, Shelties became so popular that they appeared on the AKC’s list of ten most popular dogs in the next 15 years. At present, Shelties rank 20th in popularity among 155 breeds recognized by the AKC. 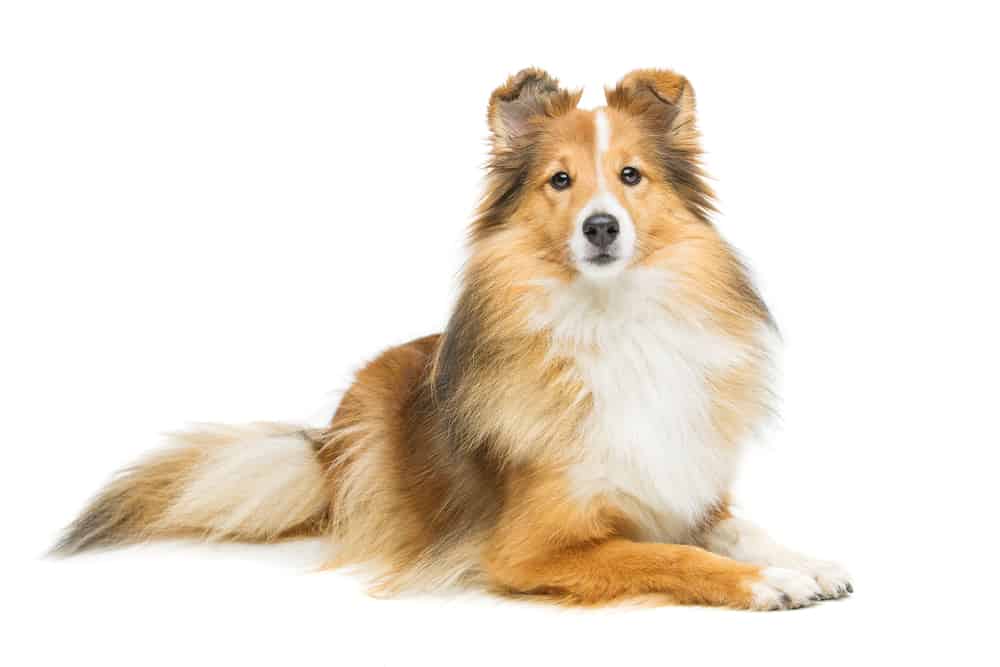 Shelties are double-coated dogs, in which the topcoat is water-repellent and raspier. Its undercoat is short and thick which enables Shelties to tolerate extreme temperatures.
Its coat on the head, ears, and feet are flawless. The mane and frill are ample, and the legs and tail are furry. Its tail is always down but is raised when being watchful and vigilant.

Shelties come in three basic colors, which are sable, black, and blue merle. It all comes with white or tan markings. However, a Sheltie with a 50% white or brindle coat is disqualified at the show ring, although it won’t affect his capability to give you unlimited love and affection. 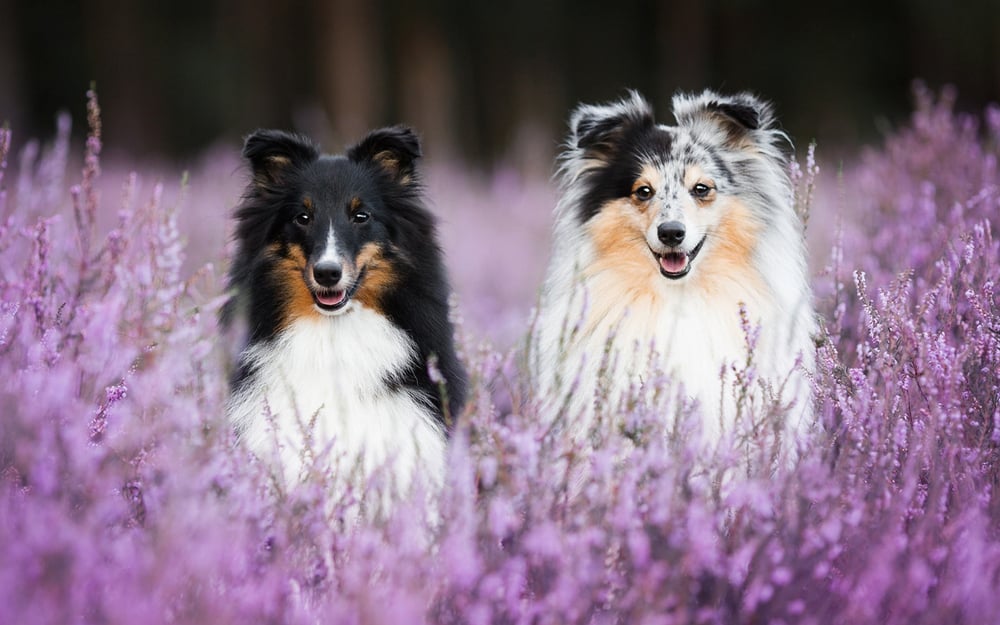 At the shoulder, Shelties typically stand around 13 to 16 inches and weigh around 22 pounds, but a big Sheltie can weigh as much as 40 pounds. While this is the average size of Shelties, they can be bigger or smaller. 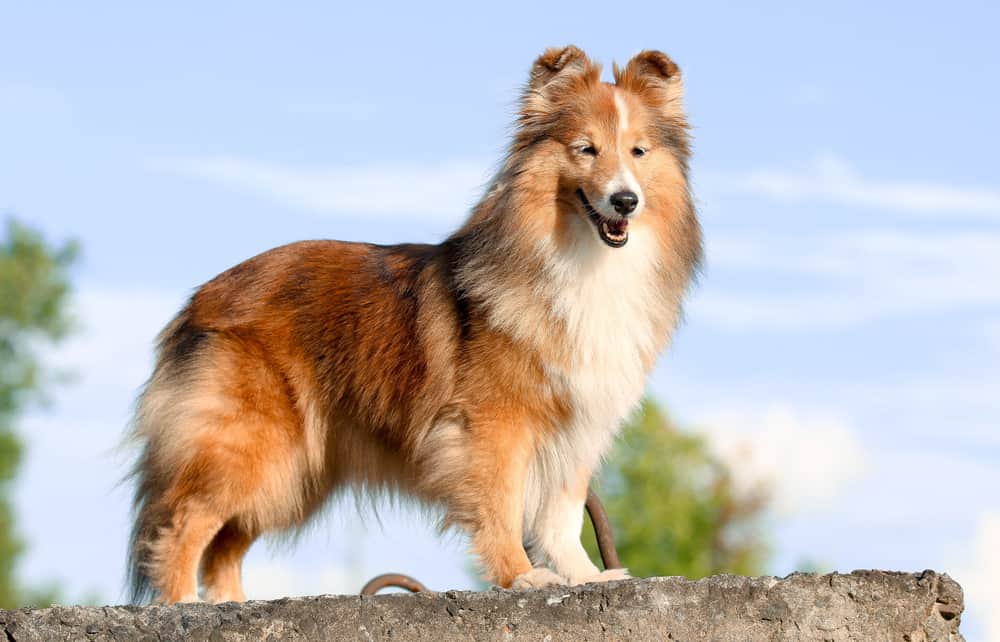 As an athletic and small-sized dog, a healthy and well-cared Sheltie can live between 14 to 16 years. Keep your dog healthy by having regular check-ups to give him a happy and longer life.

Shelties are considered heavy shedders. Sadly, many Shelties are being surrendered to rescue groups because they shed heavily. If you decide to keep one, make sure to have a vacuum available at your house.

To keep their coat in its best condition, a rigorous brushing per week is needed. Just make sure to mist their hair with a spray bottle first to keep it from being damaged.

Baths are only done when necessary, like when they get dirty and muds all over them. 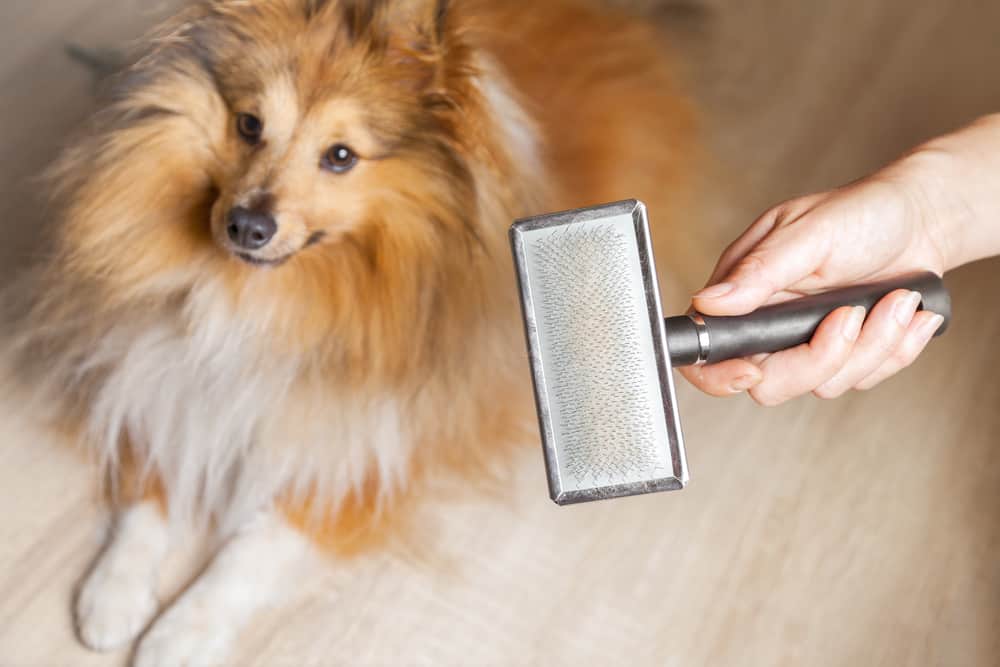 Shelties were once used as a working dog, and you may even see them “herding” small animals or even children. Unless they are bred to herd your sheep or ducks, it is important that they get the proper training to avoid this habit.

While Shelties may come in a wide range of personalities, they are all smart – maybe a little too intelligent for their own good. They easily get bored, and would always need a job to do.

Regardless of their personality, the Sheltie would always want to be near its family. However, they can also stay at home alone comfortably, provided that they have toys to entertain them, food and water, and a routine to avoid anxiety and restlessness when you’re not around.

Shelties love to bark and be vigilant towards strangers, making them excellent watchdogs. They’re also highly athletic that they excel in many canine sports.

Indeed, a nurtured Sheltie is a great addition to any family. 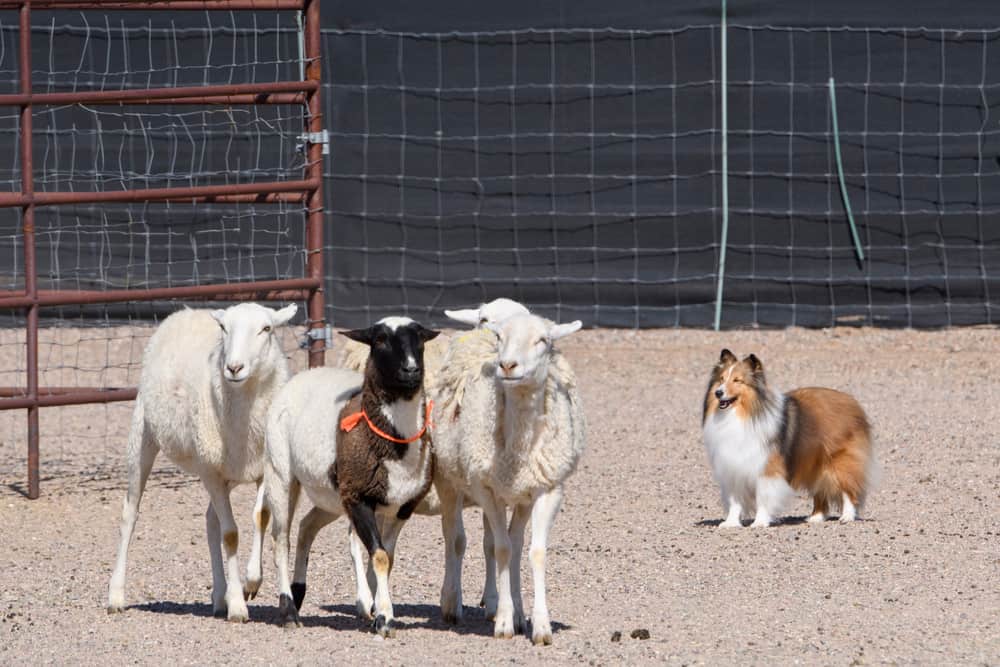 Sheltie is a one, smart breed. In fact, it ranked 6th among the 132 various dog breeds when it comes to learning new commands after only less than five repetitions – according to Dr. Stanley Coren, an animal intelligence expert.

Because they are extremely intelligent dogs, Shelties need to be kept busy, or they’ll become bored and have their own way to keep themselves entertained. 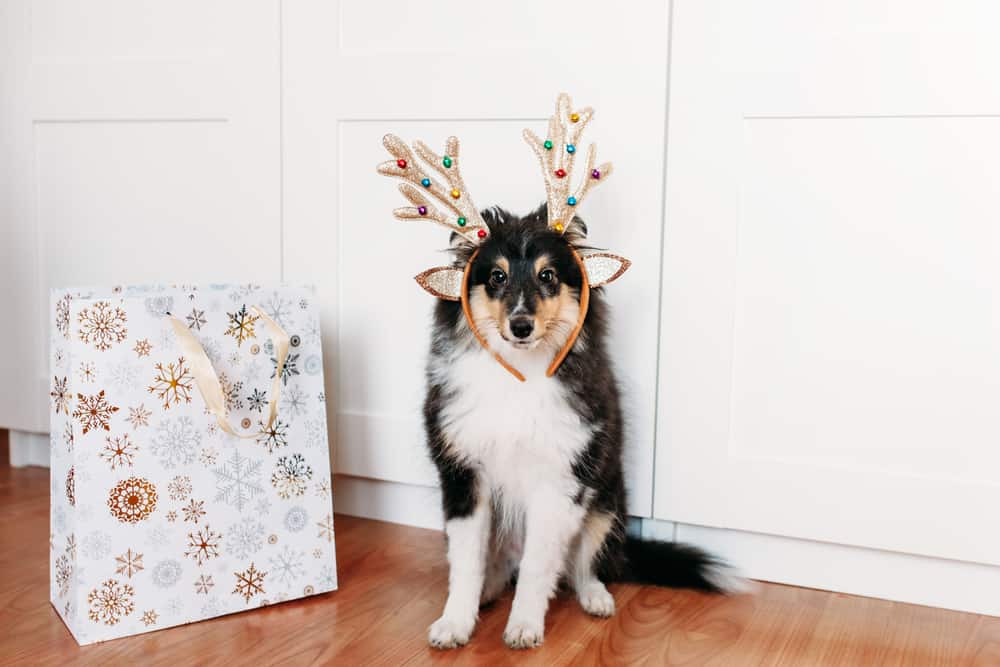 In their size group, Shelties are known to dominate popular canine sports, including agility, obedience, flyball, tracking, and herding. Their intelligence, combined with their athletic nature makes them the perfect contenders for these performance events.

They also do well as therapy dogs. 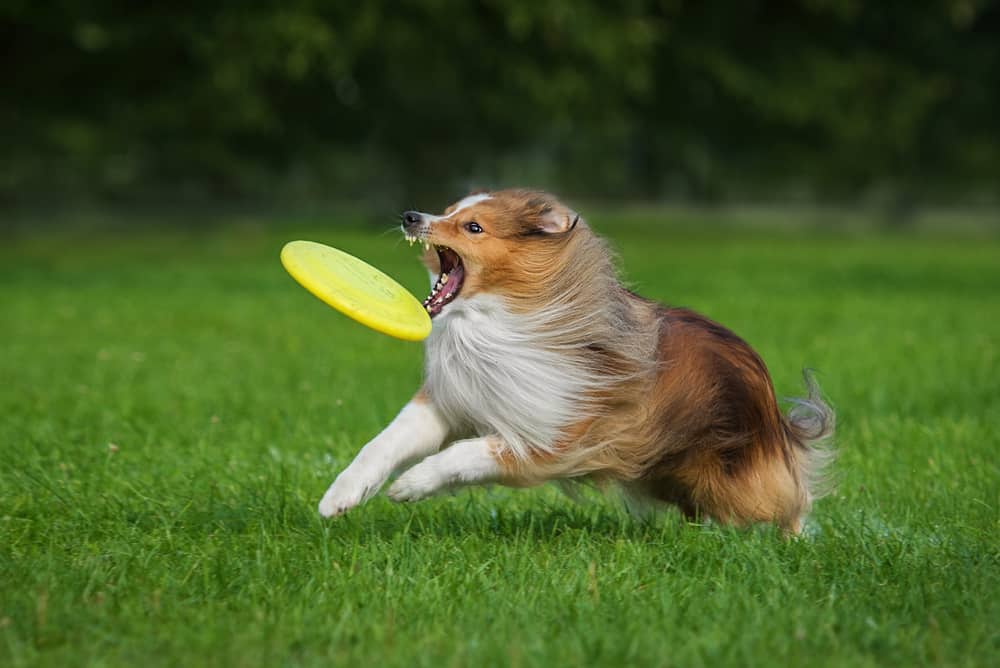 Shelties are highly-energetic dogs, which means they need an abundant amount of daily physical exercise. They are happiest when doing vigorous activities that stimulate both their mind and body, such as flyball and agility exercises. They would also love to run and play with children.

Shelties are inactive indoors and would rather cuddle with you on the sofa, so it is important that you spend time to take them out every day. 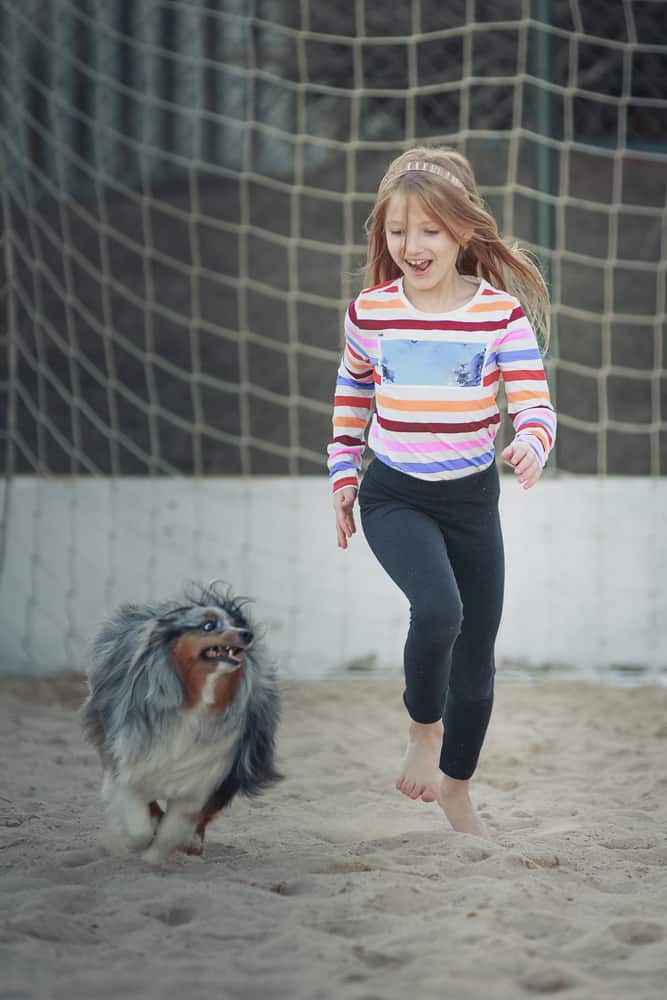 Shelties are smart and are always eager to please their owners which makes the training easy. However, they can be stubborn and get easily bored, so it is important to keep the training fun and challenging.

Just like every other dog, Shelties are responsive to positive reinforcement tactics, such as food rewards and praises. Also keep in mind that Shelties are sensitive, and their hearts are easily broken by harsh treatments, such as yelling and reprimanding. 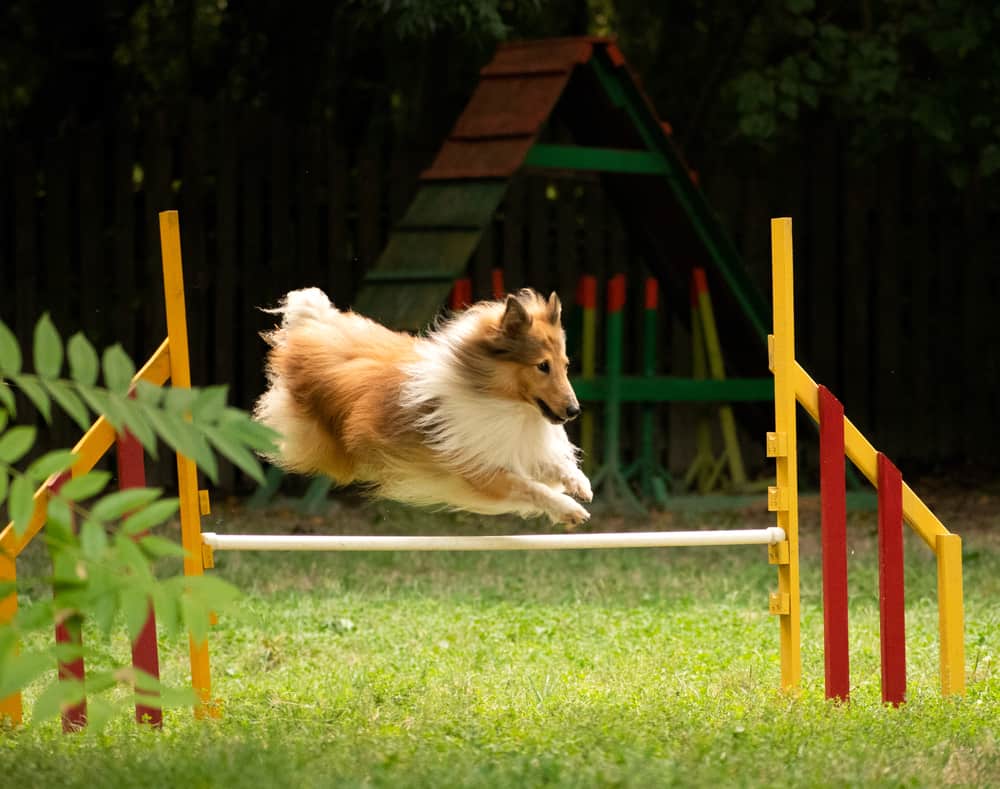 Shelties are affectionate and protective of their loved ones, which makes them excellent family companions. They also make great playmates for kids, as long as they know how to handle dogs with respect.

However, they can be aloof around new people and animals, so it is important that they are properly socialized during their puppyhood.

Although their coats let them tolerate extreme weather, Shelties should be kept indoors and live with their family. 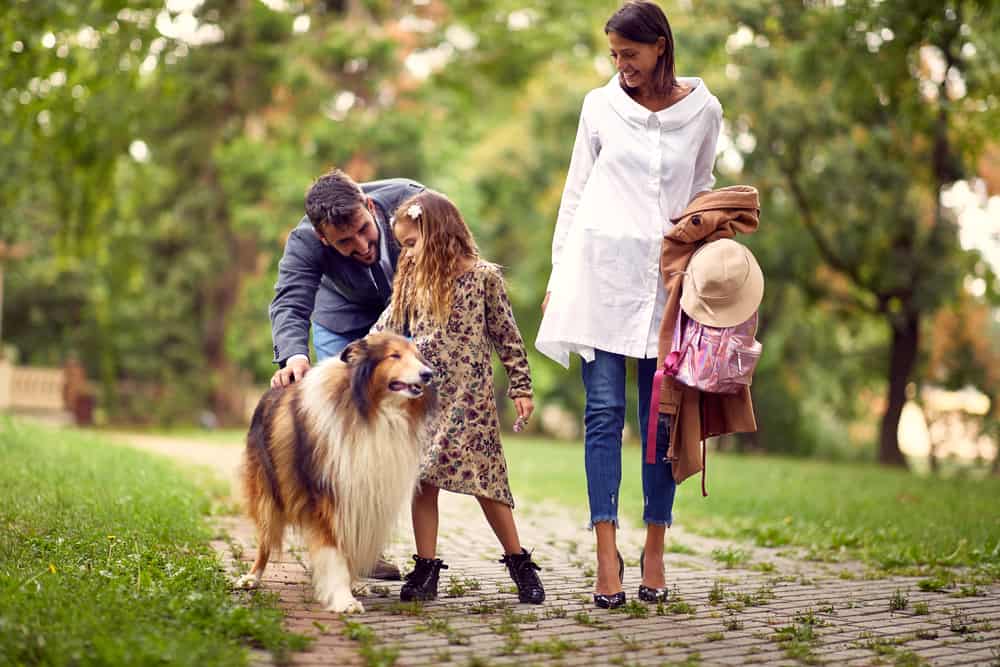 Shelties can easily adapt in apartments, provided that their daily physical and mental exercises are met. If you live in an area with a yard, it is best to secure it with a fence so they can safely run around and also to avoid “herding” moving animals, people, and even things.

Since this breed is protective, expect loud, frequent barkings. It is essential that they are trained to stop woofing on your command. If you live in an area with noise restrictions, then this dog is not for you. 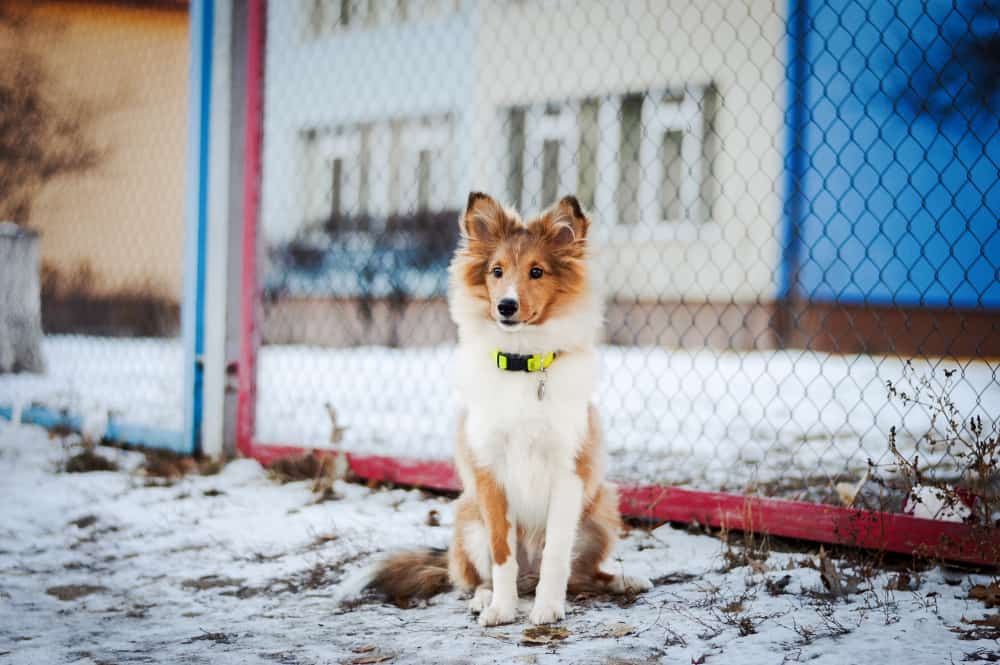 As mentioned, Shelties are sensitive dogs. If left alone for long periods without a family companion, they may suffer from separation anxiety. Keep in mind that they easily get bored, so give them lots of toys to play with while you’re gone, or else they will develop destructive behaviors.

On average, Shelties are sturdy and healthy dogs. However, that doesn’t mean that they’re immune to genetic conditions.

There is a tendency that they may suffer from hip dysplasia, thyroid disease, eye diseases, skin allergies, von Willebrand’s disease, and epilepsy.

Also, they have a higher risk, four times compared to other dog breeds to be exact, of developing cancer of the bladder.