The American bison reigns with the ranks of the Bald Eagle, after being named the national mammal of the United States on May 9, 2016. The African buffalo ranked among the Big Five, is the most hardcore African beast to ever roam the planet! Both are formidable in size, armory, and agility. But who between these two big boys would seize the throne in a face to face combat?

The American Bison, whose scientific name is Bison bison in the order of genus, species, and subspecies – but only saying it once is fine – is an ox-like mammal native to North America while the European bison, Bison bonasus is also known as wisent is native to Europe. Different from the domestic oxen in several aspects, American bison is robust with a broader stockier head that is carried low and cannot be raised to shoulder height. They have a pronounced hump at the shoulders, heavy forequarters, and are covered in coarse, shaggy dark brown fur. They grow a beard on the chin and short, upcurved horns for both sexes. 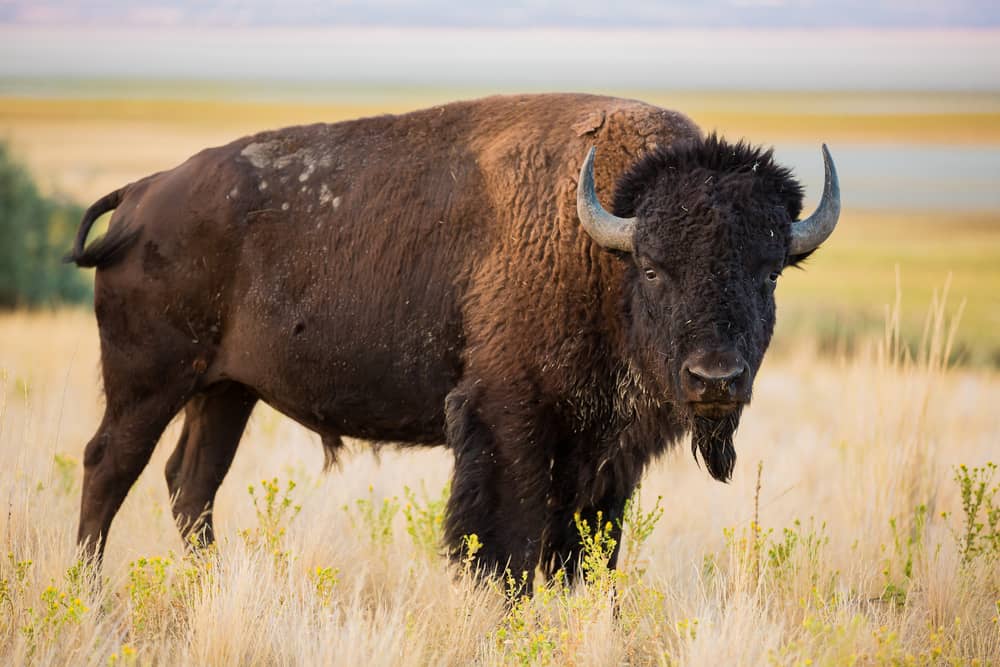 The African buffalo has five distinct subspecies distinguished by the coloring, size, and shape of the horn. They are the Sudanese buffalo, Nile buffalo, Mountain buffalo, Congo buffalo and the most naturally occurring is the Cape buffalo. Cape buffalos have a thin black coat except for young calves whose coat varies between brown and black. Their horns are thick and wide, with a slight difference between the sexes. Adult males have a hard shield in the middle of their heads known as a boss that joins the horns while females have narrower and smaller horns lacking a boss. 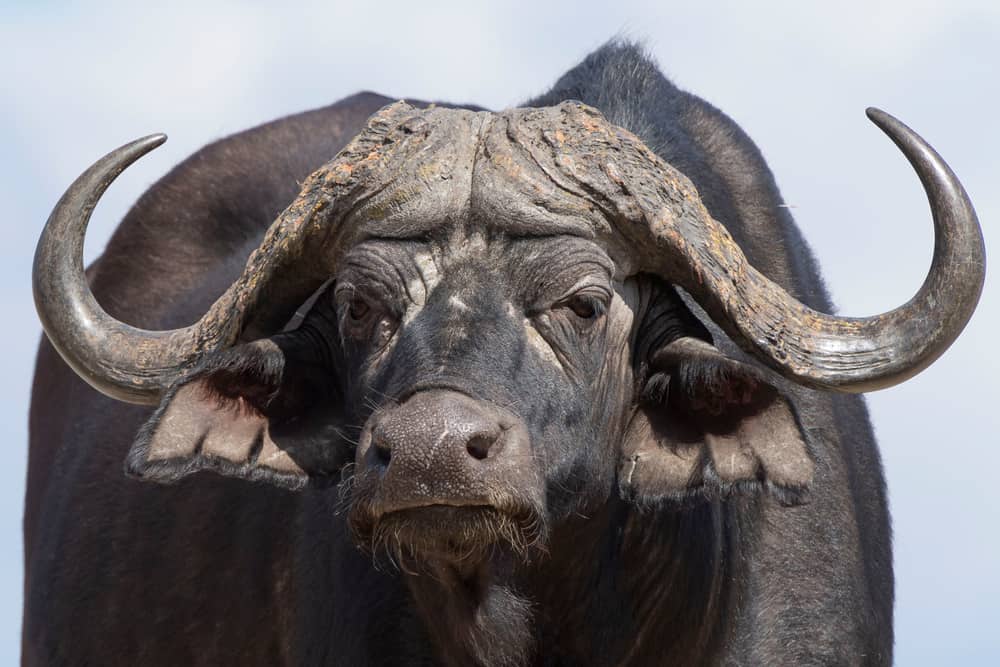 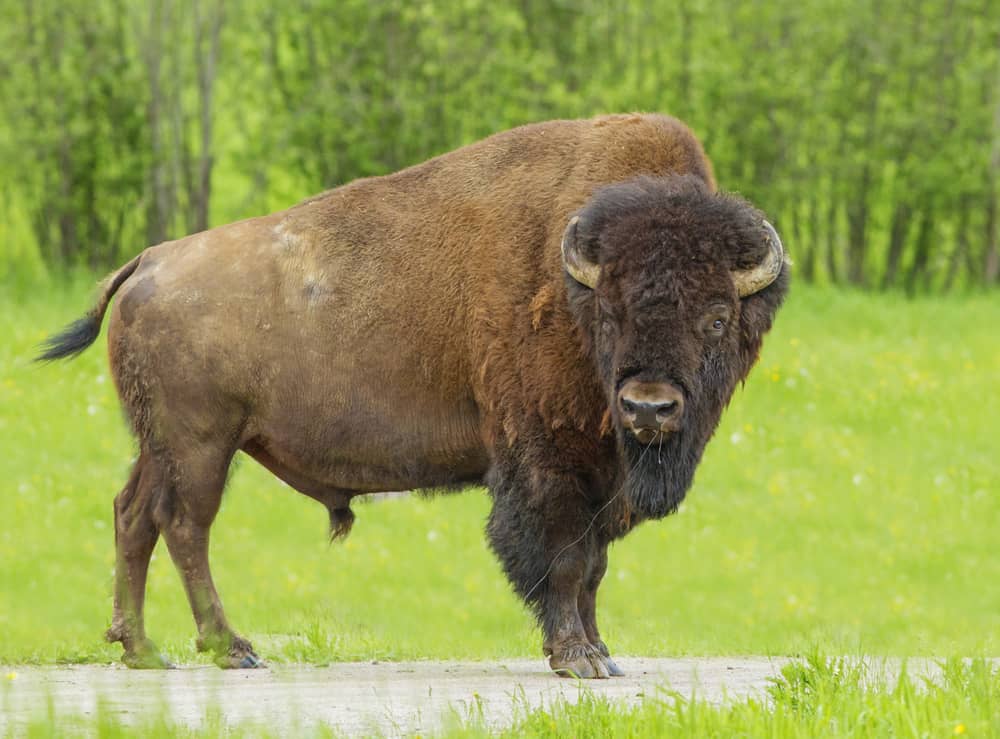 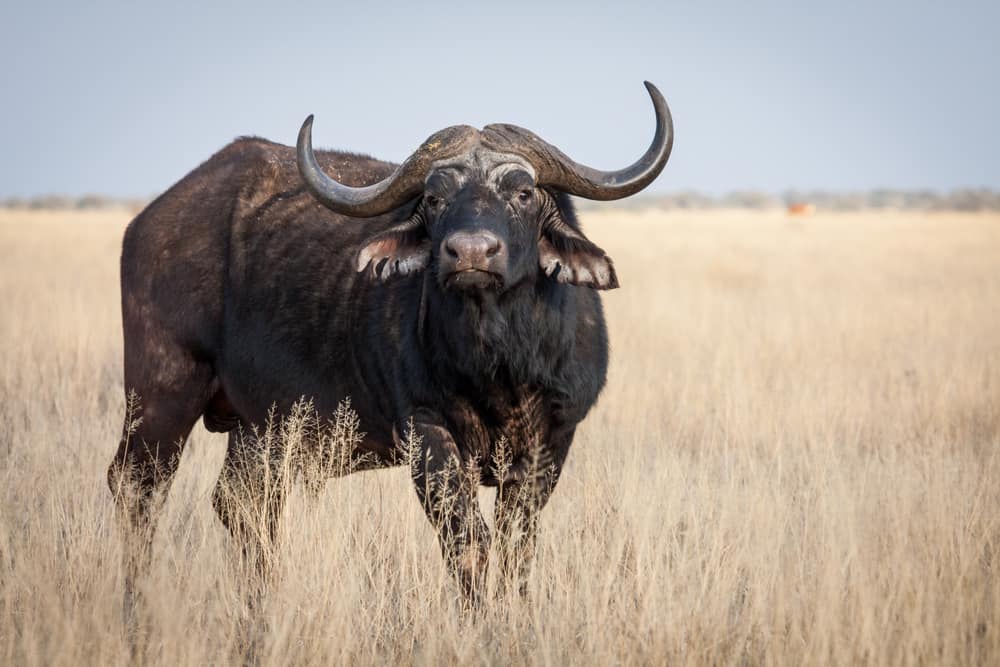 The American bison once roamed in the Great Plains and much of North America in millions. However, after numerous hunting by the settlers, their enormous herds were reduced to only a few hundreds of animals, now living in ranches and preserves. Bison have a great preference for river valleys, prairies, and plains. Their habitat is generally in open or semi-open grasslands, semiarid, and scrublands. Just as their name suggests, African buffalos are distributed throughout Africa, from southwest Ethiopia, through Kenya, Uganda, Rwanda, Tanzania, Zambia, and Malawi. Adult buffalos widely settle in swamps, floodplains, mopane grasslands, open woodlands, and the forests of major mountains of Africa. Forest and red buffalos inhabit the forests and swamps of Central and West Africa. 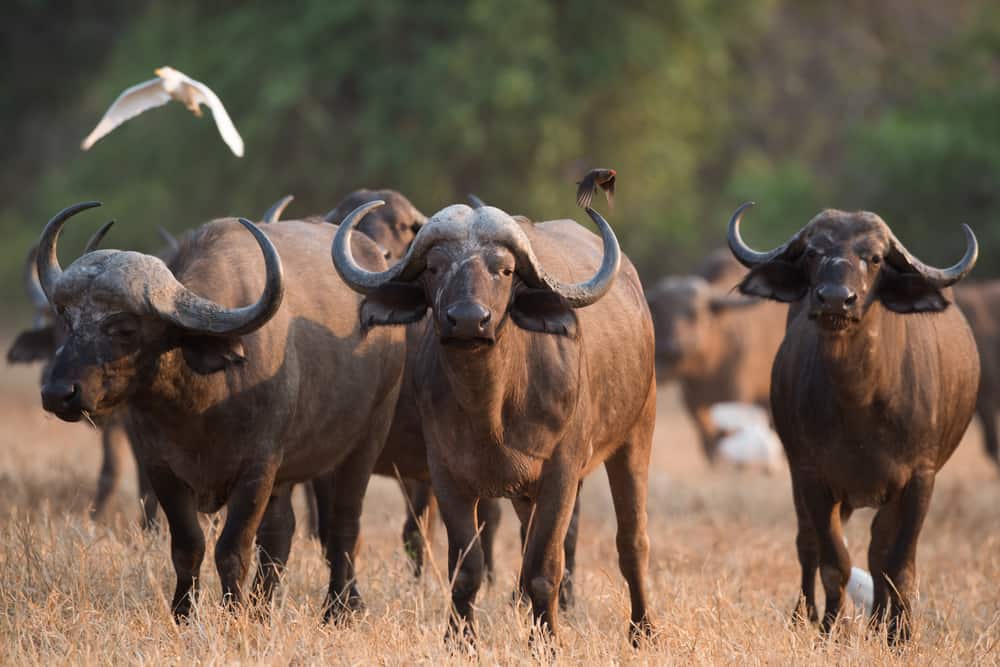 The average lifespan for bison is around 10-20 years but some may live to be older. African buffalos can live up to 18 years in the wild.

Bison live in small bands consisting of one or more females and their generational offspring. Bulls form isolated herds. The large temporary herds are a result of the gathering of these small bands. In mating season, bulls engage in head-butting contests that are rarely harmful to establish social dominance. Their mood is often predetermined by their tails. When the tail hangs down or swings naturally, they are calm but when it’s standing upright, it may be getting ready to charge. They roll in the dirt to deter biting flies and shed fur.

African buffalos have a rather complex social structure based on a dominance hierarchy where dominant males and females are the main decision-makers for the group. Dominance is established by size, strength, and age. They live together, forming a large herd, with related cows forming the core of the herd. During the dry season, bulls form isolated bachelor herds and rejoin the main herd in the wet season to mate. They cover themselves in mud to prevent ticks and parasites. During the mating season, male bison bellow to display their strength and leave behind their scent. Cows and calves communicate through grunts as well as distinct high-pitched bleats made by younger calves. Bison can also let out snorts, coughs, or roars.

The African buffalo uses explosive grunts and rumbling growls to signal aggression towards fellow herd members. Long “maaa” calls are made as they approach water sources to express pleasure, contentment, or anticipation. In dreadful situations, they let out long “waaa” calls.

Both bison and buffalos are herbivores, which means they feed exclusively on vegetation. They consume large amounts of food to match up to their huge weight and activity. Bison’s diet is predominantly grass and sedges. Occasionally, they will eat berries and lichen. 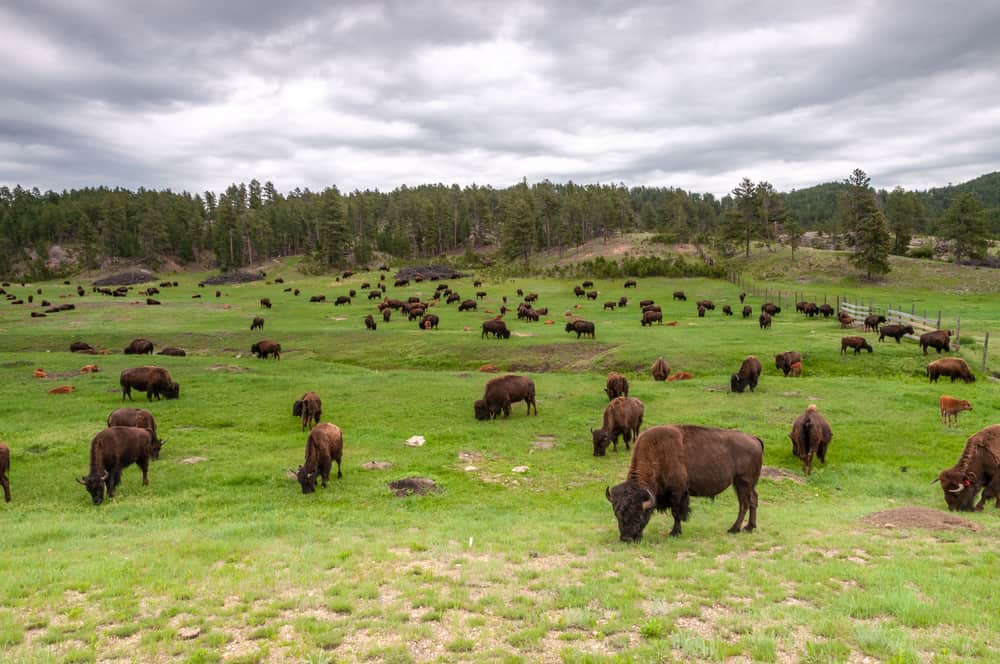 Buffalos feed on grasses, leaves, herbs, shrubs and aquatic plants particularly fed on by the water buffalo. Buffalos feed at night and cool periods of the day. 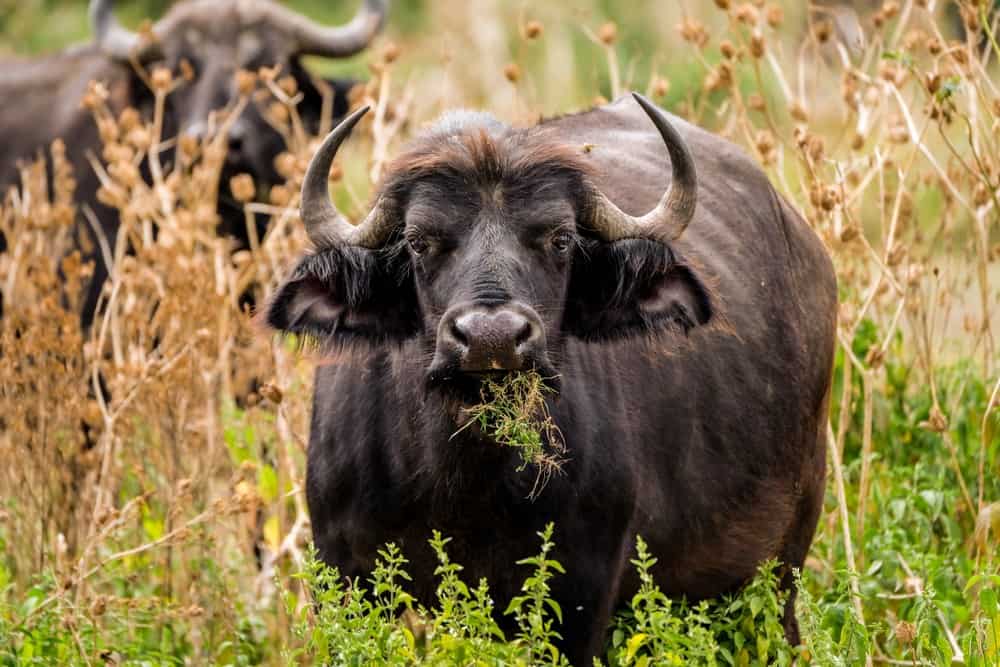 Bison are bulky, crowned with muscular power, and have horns, two attributes that discourage predators from messing with them. Well, you wouldn’t want to be on the wrong end of a fight with a bison. 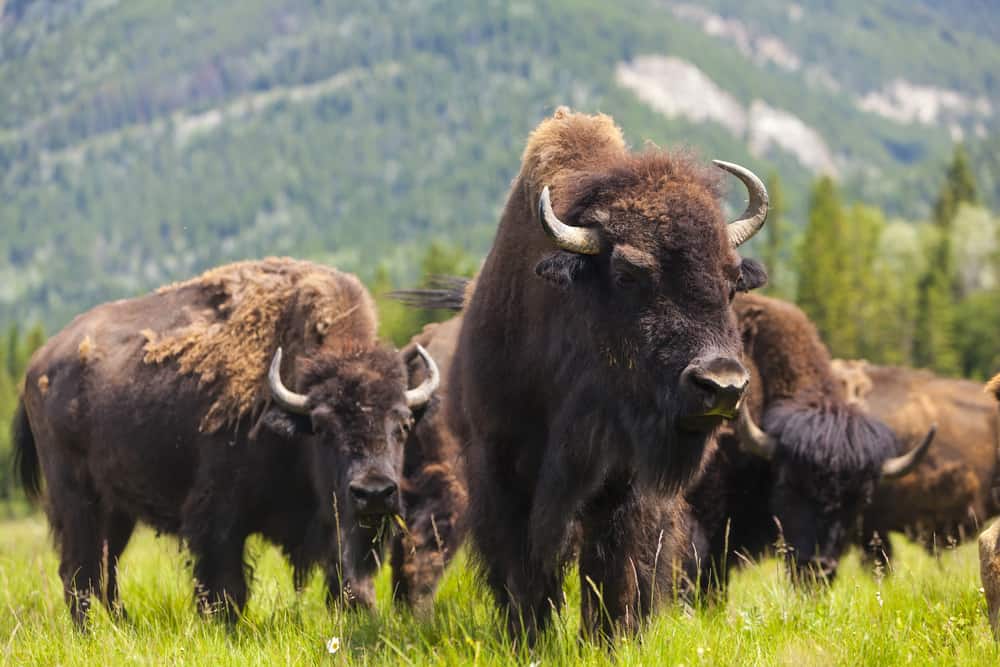 According to research, buffalos have four times the strength of an ox. Even the King of the Jungle finds it tremendously hard to hunt down these adamant massive beasts. They find their strength in numbers as the larger the herd, the more likely it will keep away predators.

Despite the heavyweight, bison can run up to 40mph (65kph), fast enough to outrun a horse with a quarter-mile difference. American bison can jump 6 feet high, make fast spins and jump high fences. 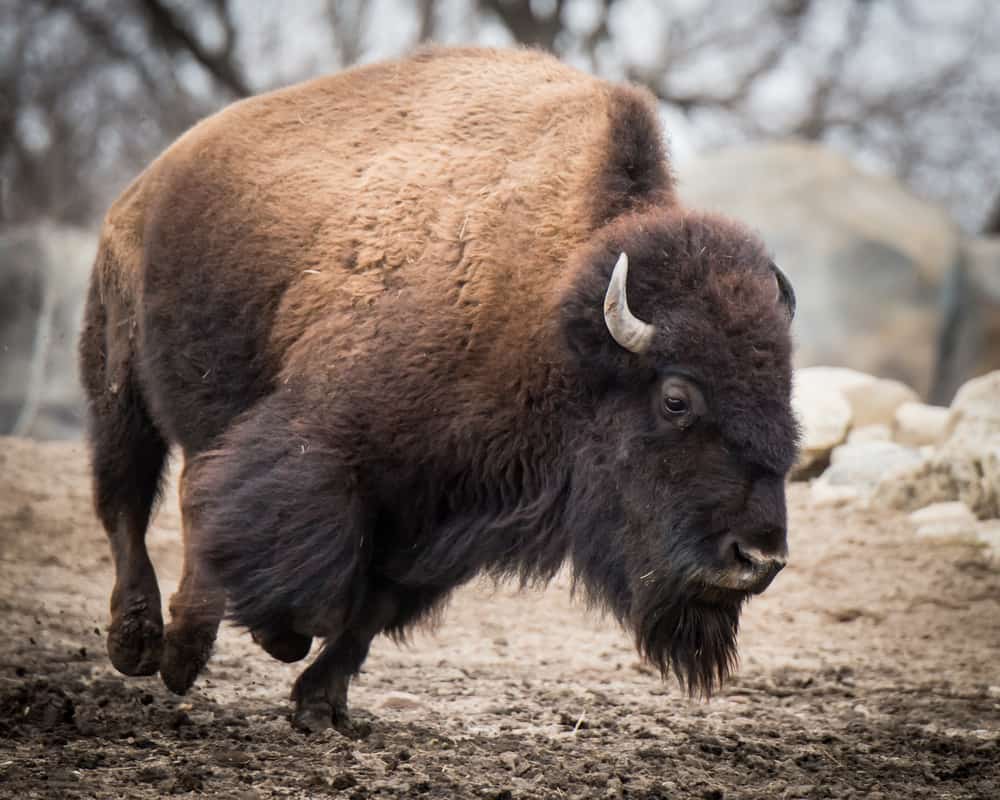 Buffalos are quite phenomenal. One minute they’re chewing and the next moment they can be sprinting at 31mph (50kph). Buffalos can run at maximum speeds of 35mph (56kph). compared to the fastest running human, Usain Bolt, who’s speed was recorded to be 27mph (43kph), these beasts are champion sprinters. 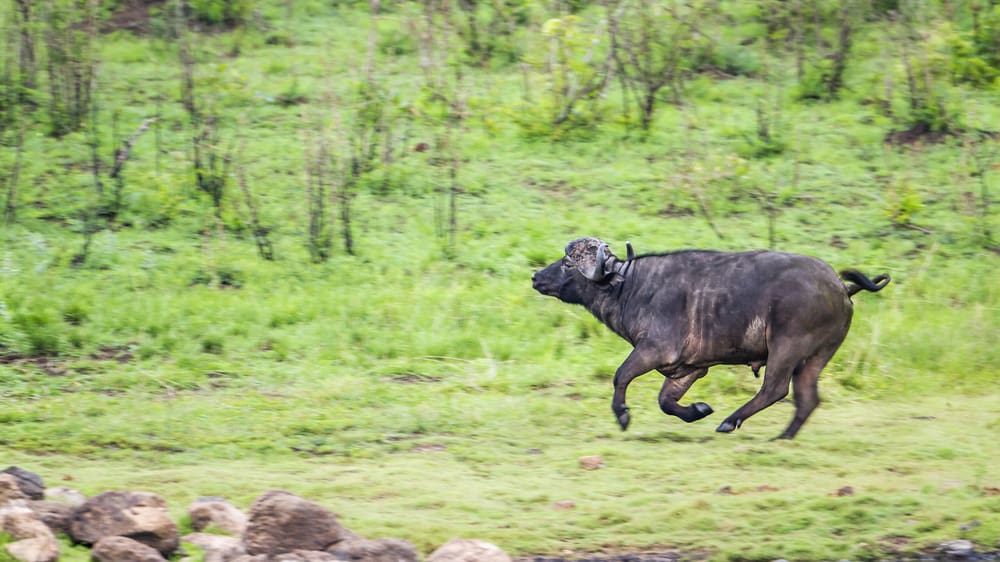 Though attacks are rare, bison are rather unpredictable animals that are extremely agile, competitive, and energy-efficient. Every member of the herd is responsible to defend their young vigorously. Moreover, they are responsible for most human attacks in Yellowstone National Park and can easily kill a human if rattled enough. Their predators, mostly wolves, are known to target the old, incapacitated, or very young individuals among the herd. 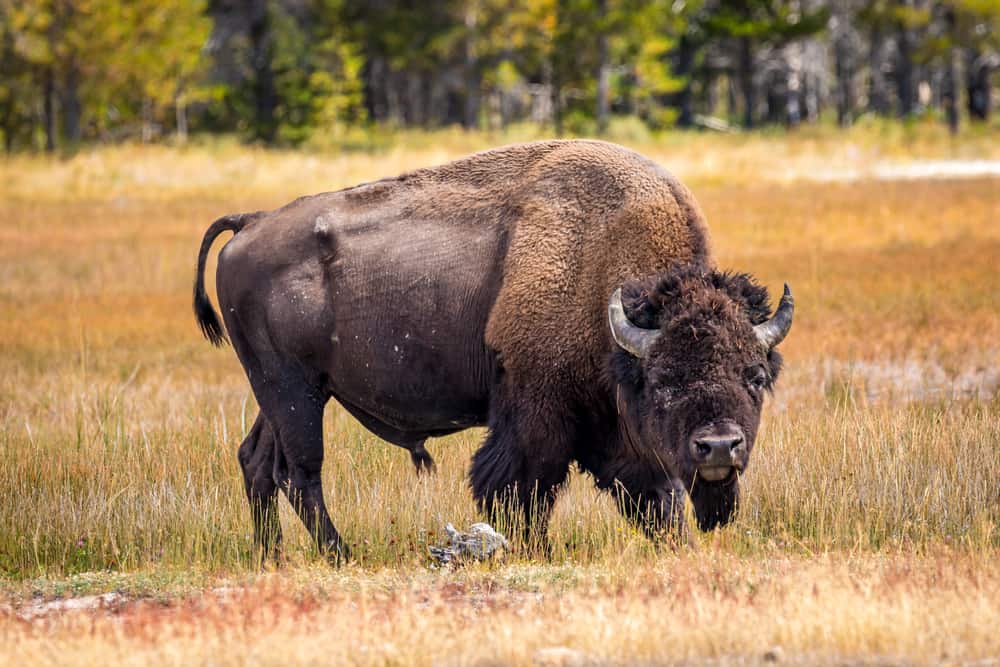 Comparably, buffalos have been long known attackers of poachers and hunters. In fact, they are deemed with excellent memory as attacks of humans who injured them years back have been rampantly recorded. They are vicious defenders of their members and would put to flight and even kill lions when aroused by distress calls or seek out the lion cubs to kill them as punishment. 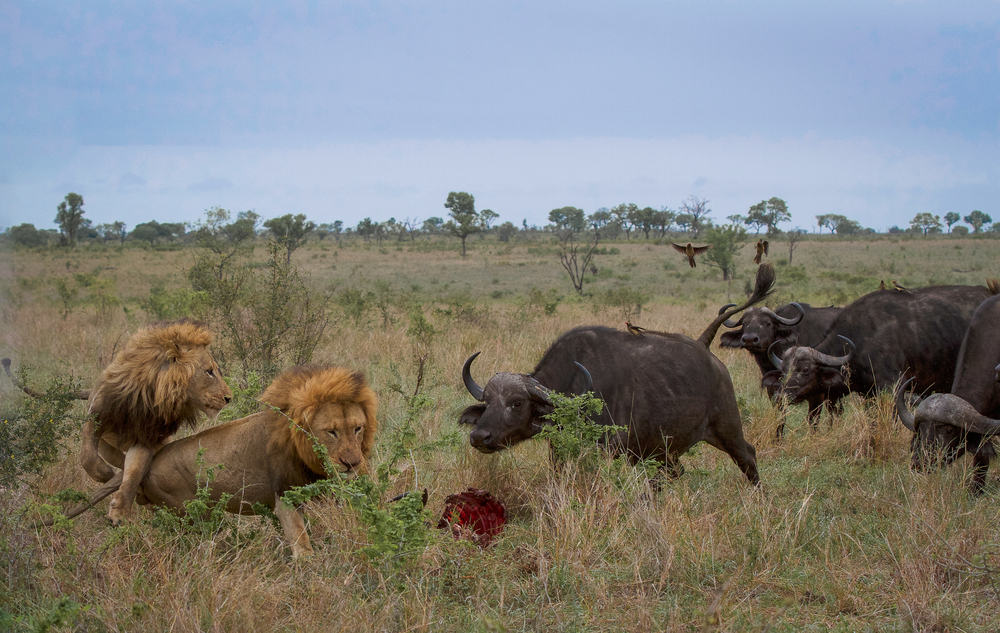 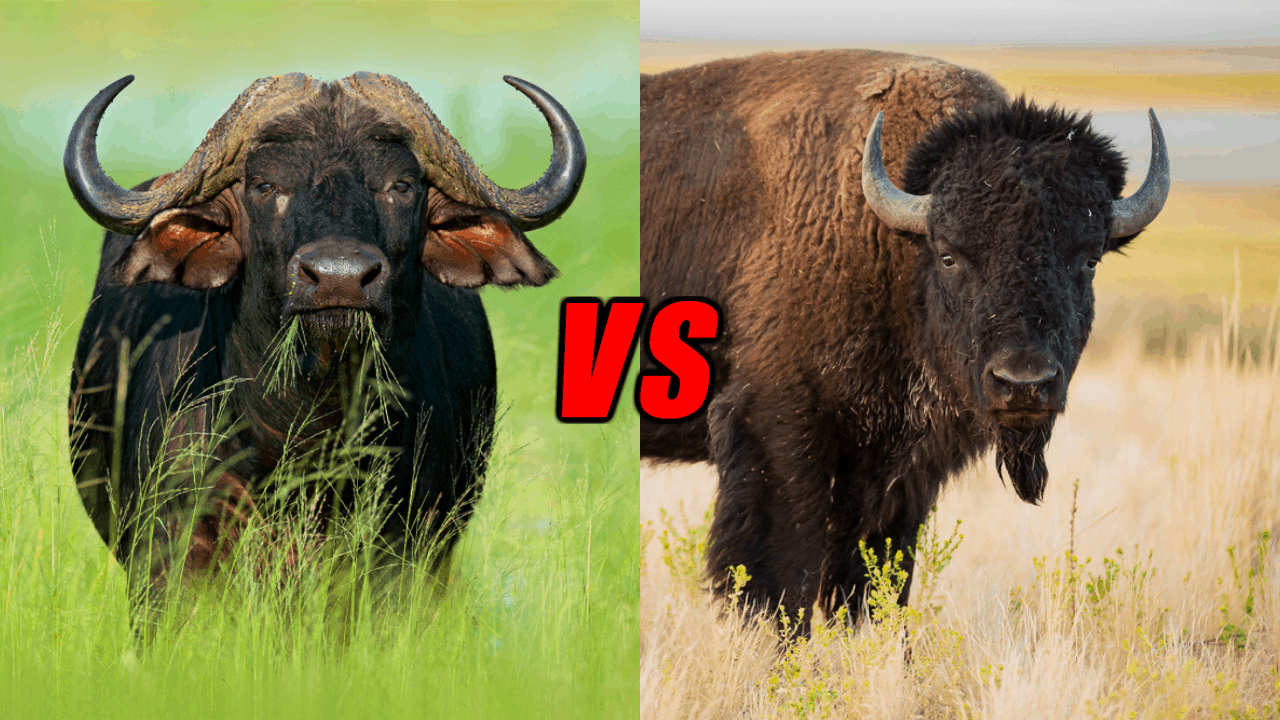 The two species thrive in different habitats and it is more likely than not they will never meet. However, we’ll break it down on hypothetical grounds. A fight between the American bison and African buffalo would leave the buffalo more durable and likely the prize winner. Here’s why.

Although both are aggressive buffalos put up with an assorted array of threats from lions, wild dogs, leopards, and cheetahs too. While the bison is only hunted by humans and wolves primarily. As a result, the buffalo is more experienced on a pound to pound combat. It also builds their stamina for such lethal encounters.

Also, mass is a key factor for a victorious fight. Even though the bison is stocky and muscular, the buffalo’s size advantage would be a little too much for him to overcome. Aside from size advantage, buffalos are also better equipped compared to their American counterparts. The African buffalo’s horns can grow to an average size of 4-5 feet (140-160cm) while those of the bison are only 2 feet long. To top it all off, buffalo are thicker and have a solid boss to protect its brain from potential injuries. Now, this is one remarkable head-buttering potency leaving no chance at all for the “boss-less” small horned but muscular bison.

Therefore, unless the buffalo is injured, too old or young will the American bison stand a chance at winning.