The hippo is a rotund semi-aquatic animal whose name comes from the Greek word for ‘water horse’. Rhinoceroses are prehistoric robust mammals believed to have existed since the Miocene era. Who do you think would seize the throne in an epic fight between these two millennial giants?

Rhinos are magnificent beasts that exist in five different species namely the White rhino, the black rhino, the Indian rhino, the Javan rhino, and the Sumatran rhino. The black and white rhinos are the most naturally occurring subspecies in the world. The black rhino has a pointed upper lip, giving them the name hooked lipped rhino, with shorter but more protruding heads and each of their two horns closer in length than the Whites, or square-lipped rhinos which have square-shaped upper lip with longer heads, from mouth to ears, and a longer front horn than the second horn behind it. The Javan and Indian rhinos have one horn. Despite their names, rhinos have thick hairless gray hide. 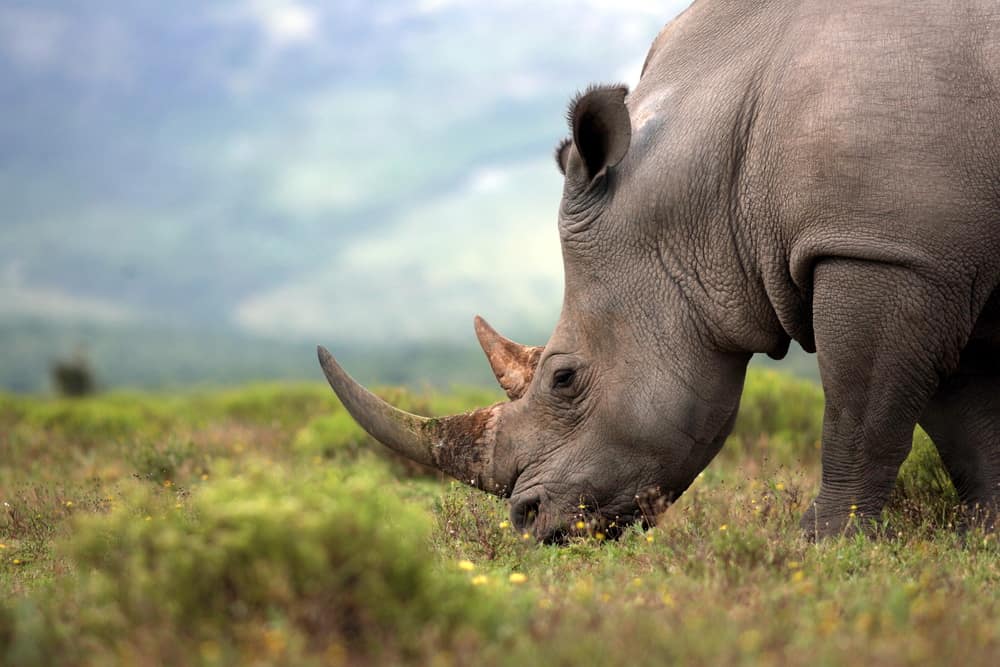 Hippos are robust semi-aquatic mammals with grayish to muddy-brown skin which fades to a somewhat pink color underneath and a barrel-shaped body. They have short legs, a short tail, and a gigantic head. Their eyes and nostrils are located on their heads to allow them to see and breathe while submerged. Their skin secretes an oily red substance that moistens their skin and protects against bacterial infections. 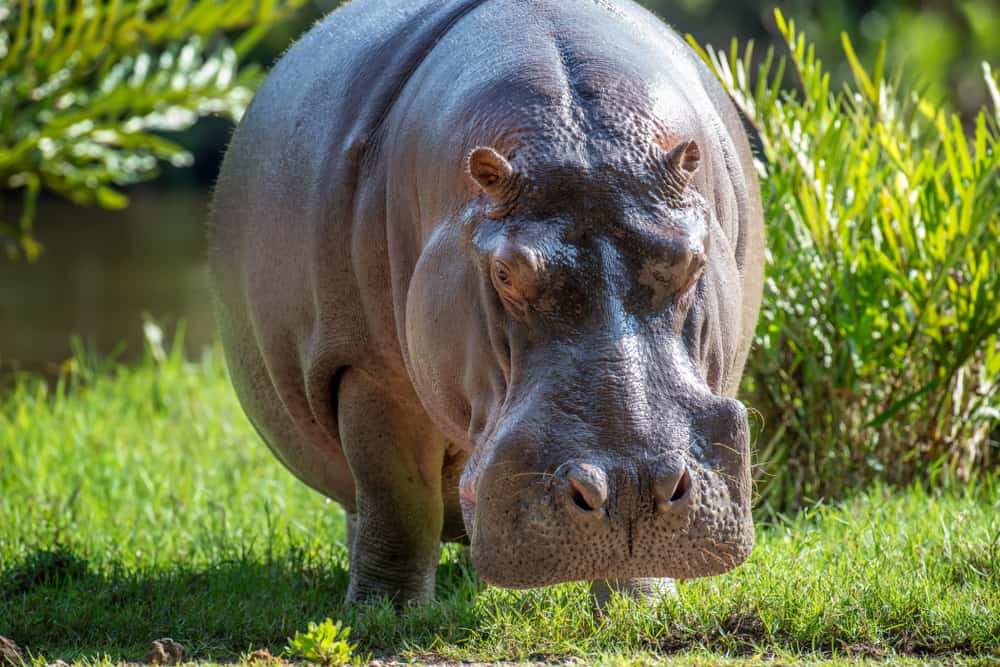 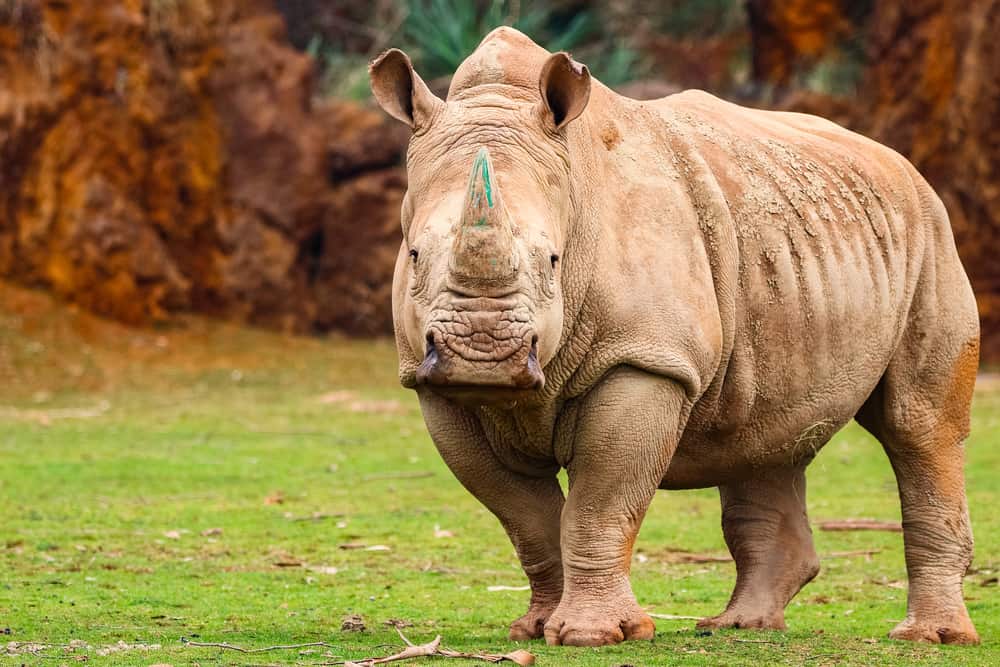 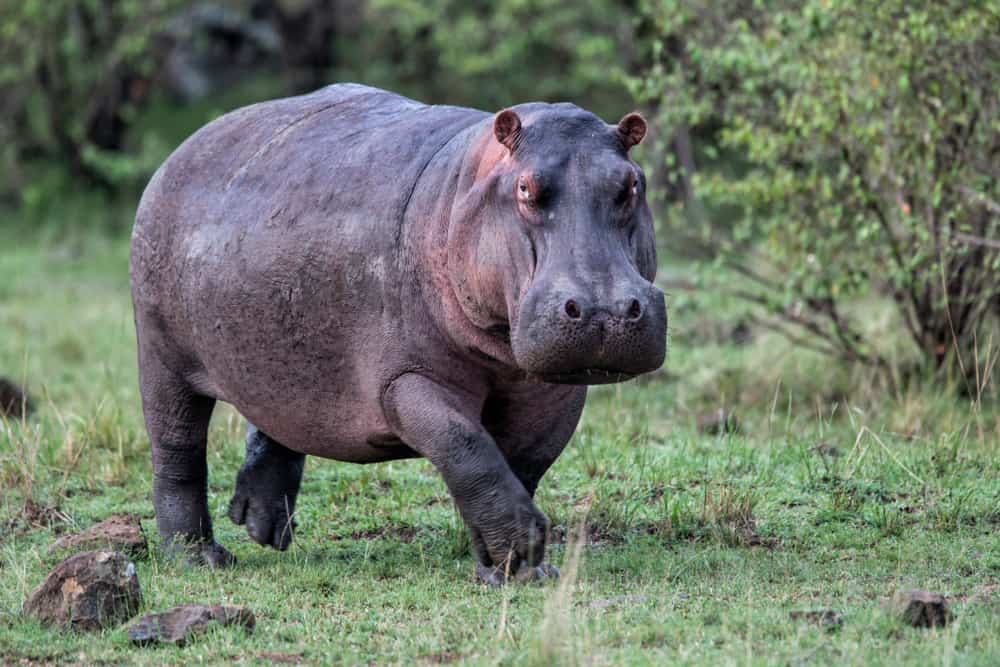 The black and white rhinos live in the grasslands and floodplains of eastern and southern Africa while the Sumatran, Indian and Javan breeds can only be found in small areas of Malaysia and Indonesian swamps and rainforests. 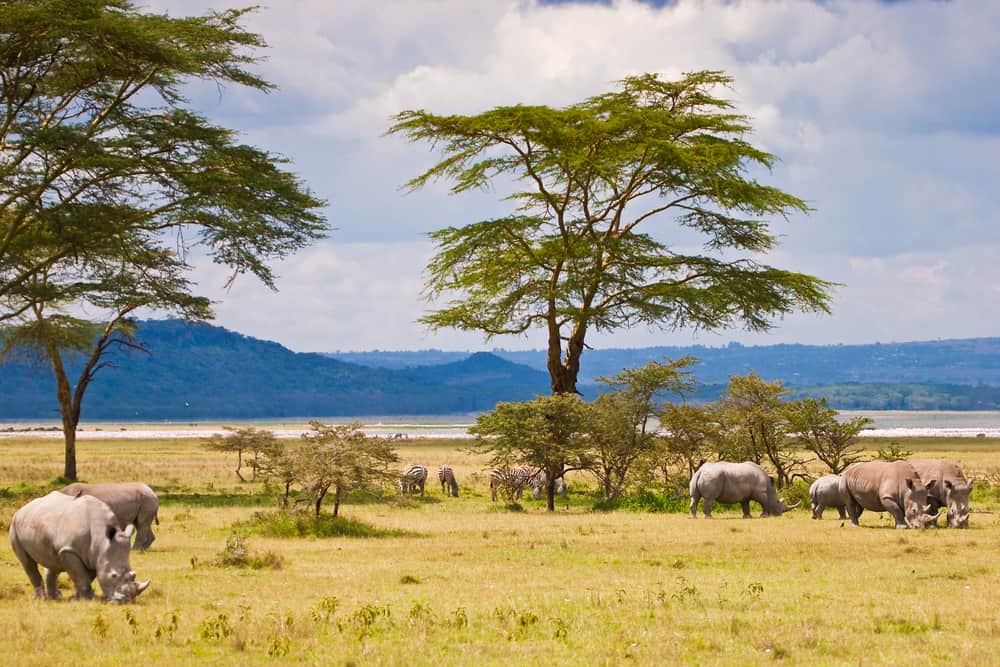 Hippos are distributed in sub-Saharan Africa, in areas with abundant water. However, a rogue population is believed to live around the Magdalena River. 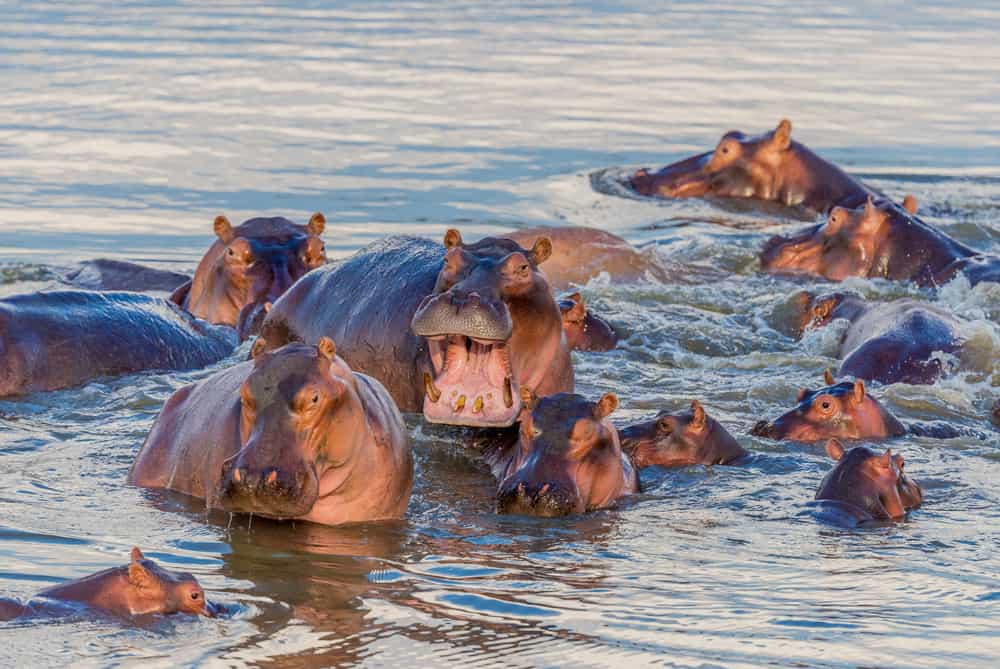 Rhinos love to get mucky and would often wallow in muddy pools to form a natural sunblock and ward off biting bugs. During the heat of the day, they are mostly found sleeping in shades to cool off. They are primarily solitary animals and like to avoid each other but interact at night during feeding time. Males are territorial and would only allow other subordinate males to live in their territories. Though lone rangers, female cows and their offspring occasionally form groups called crashes and can roam freely around several territories. 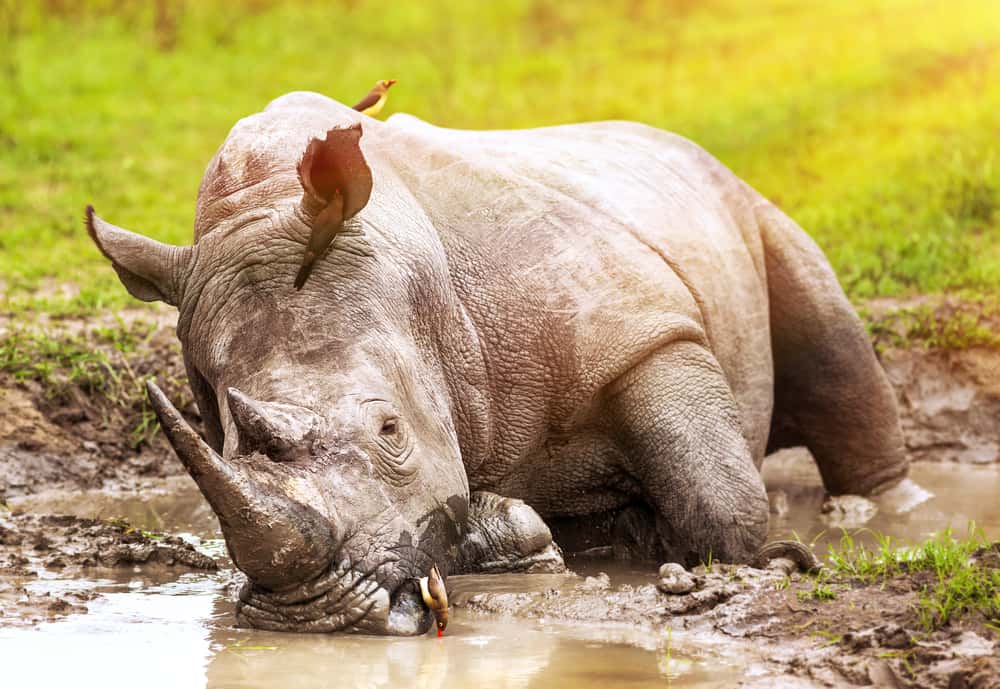 Hippos love water and can spend up to 16 hours a day submerged in rivers and lakes to cool their bodies and protect their skin from the hot sun. Hippos can’t swim. Due to their heavyweight, hippos balance on their tippy-toes or stand on sandbanks while in water. However, if they go underwater, they are usually trotting along the bottom and come up to breathe for they can only hold their breath for up to 5 minutes. Bulls frequently open their mouths wide to show dominance. At sunset, they abort the water and travel overland to graze. Hippos can travel for up to 6miles a night foraging. 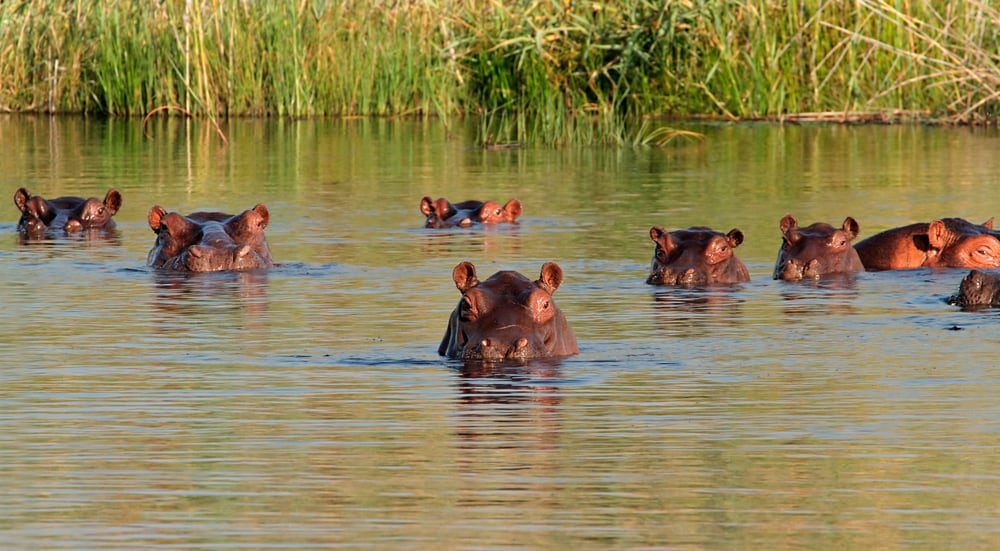 Although rhinos keep to themselves, they make a variety of vocalizations including growling, grunting, mooing, panting, screaming, and trumpet sounds. Moos and squeals are used between mother rhino and baby to communicate while bleating sounds signal submission. Alpha males grunt and growl at their rivals to show dominance or even communicate within the group. Snorting and sniffing sounds are let out when disturbed or during instances of anxiety. 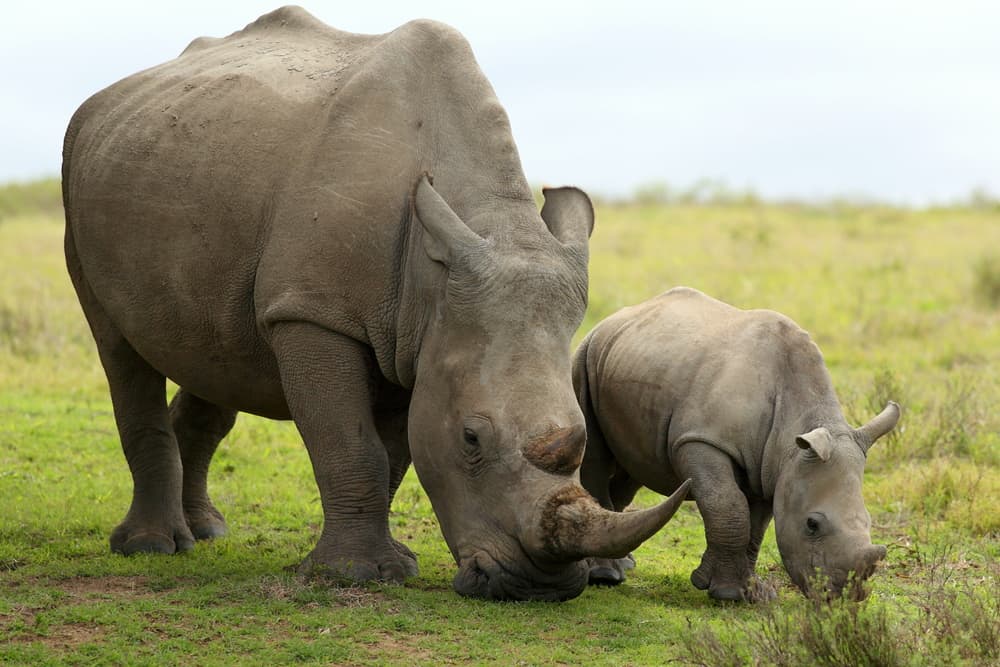 Hippos can roar, produce grunts, growls, wheezes, and chuffs. Unlike rhinos, hippopotamuses are very loud animals. According to the San Diego Zoo, their snorts, grumbles, and wheezes have been measured to be equal to 115 decibels, about the same volume produced by speakers from a rock concert while 15feet (4.6meters) away. Chuffing noises and honks are produced through the nostrils and sound like a deep laugh. Hippos can also use subsonic vocalizations to communicate. 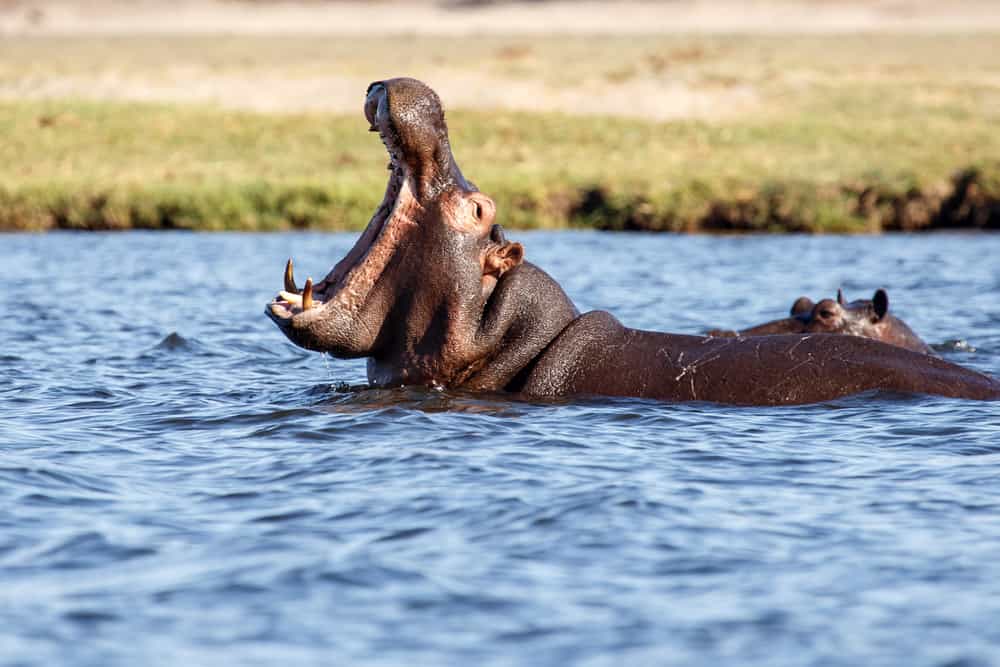 The rhino is a herbivore and devours lots of grass and plants at night, dawn, and dusk. Nonetheless, the shape of their snouts defines their diet. Hooked-lipped rhinos pull leaves and fruits from trees and bushes as they browse for their food while the square-lipped rhino is adequately adapted for grazing. They must eat up to about 120 pounds (54kg) of grass per day to sustain their weight but can go up to five days without water. 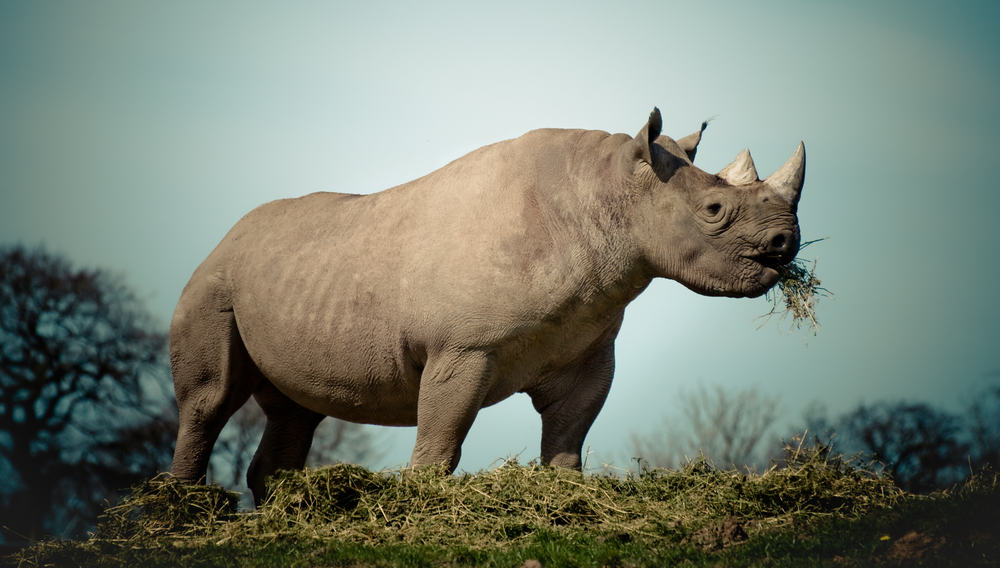 On the contrary, hippos are omnivorous animals although they were long believed to be exclusively herbivorous. Studies have shown that hippos may occasionally feed on the carcasses of other animals including those of their kind. However, when they are not scavenging, they maintain a herbivorous appetite consuming about 80 pounds (35kg) of grass every night. Considering their size, their food intake is relatively low. During food scarcity, they can store food in their stomachs and go up to three weeks without eating. 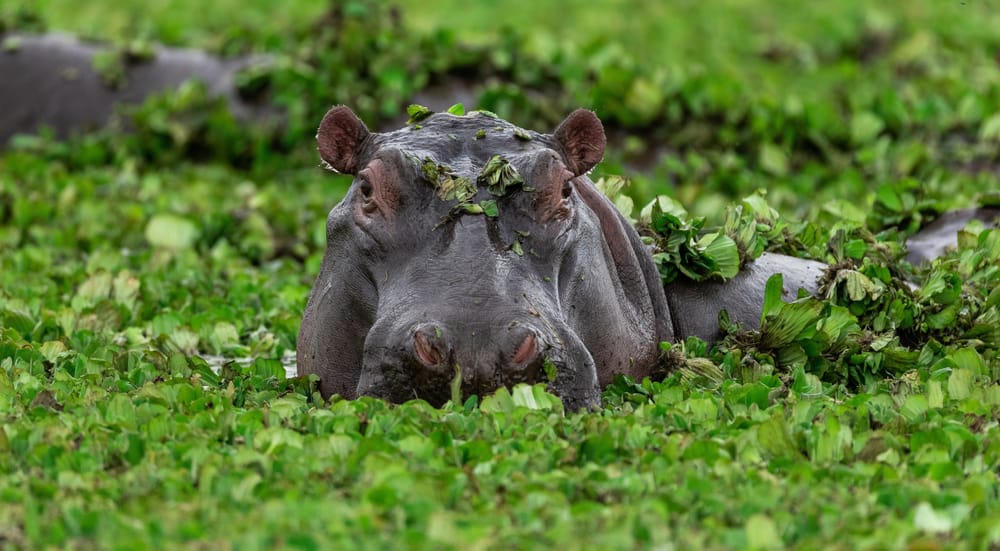 Although deemed as merely vegetation munchers, rhinos have quite exceptionally powerful jaws with a bite force of 1100 psi, more powerful than a lion’s 650 psi. 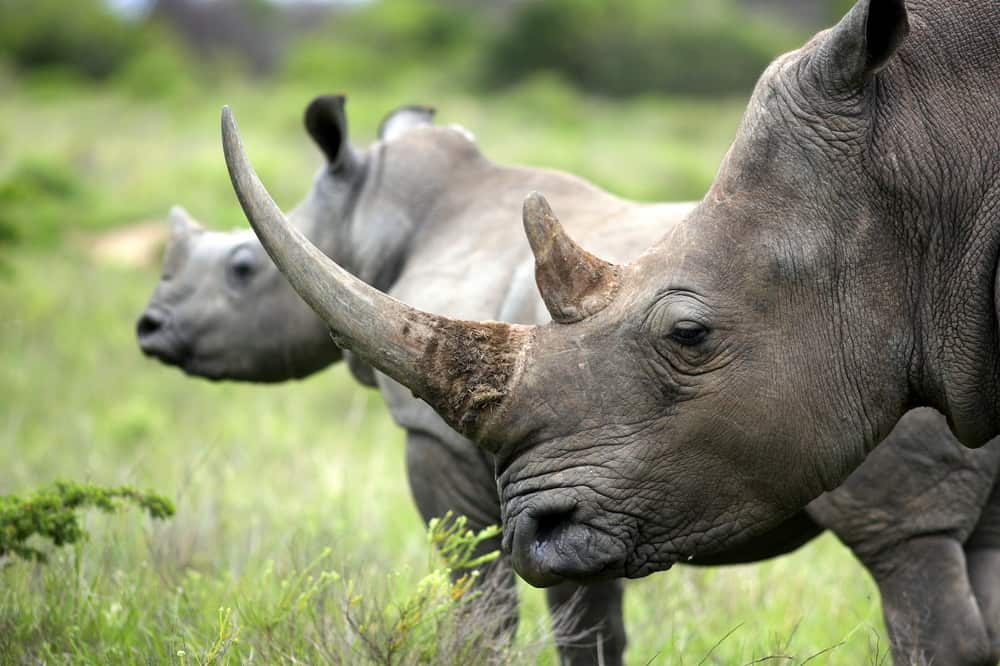 Hippos are formidable beasts who apart from their bulk, can bite an unwary tourist into the half with a ferocious bite force of 2000 psi. 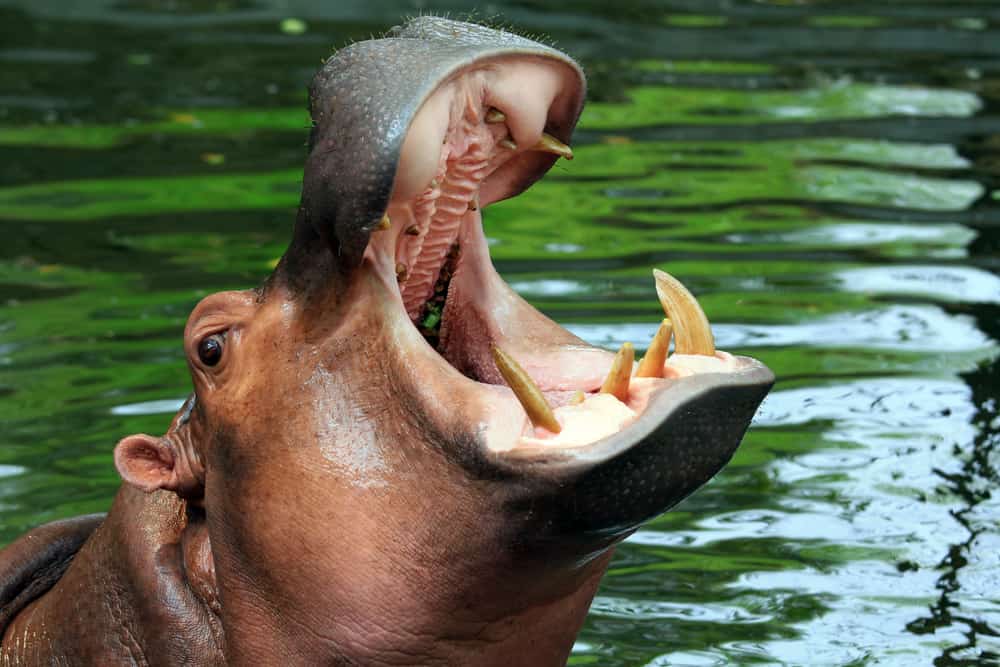 Rhinoceros speed varies between the species. The rhino can run at average speeds of 34 mph (55kph) which is greater than the speed of the fastest human, Usain Bolt, recorded to be 27.8 mph (44.64kph). Therefore, if this beast is onto you, diving to the ground and rolling out of its way is the safest option for you can never outrun a charging rhinoceros. 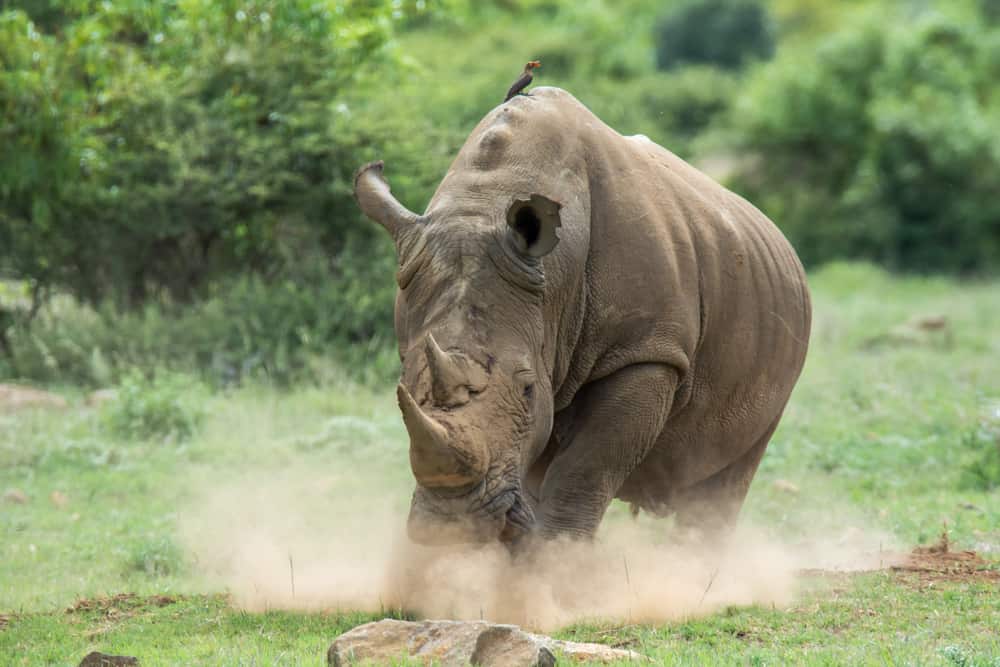 Adult hippo top speed is about 19 mph (30kph) on land. They also move at speeds of up to 5 mph (8kph) in the water, generally resurfacing to breathe. Though incapable of jumping, they can climb steep banks. 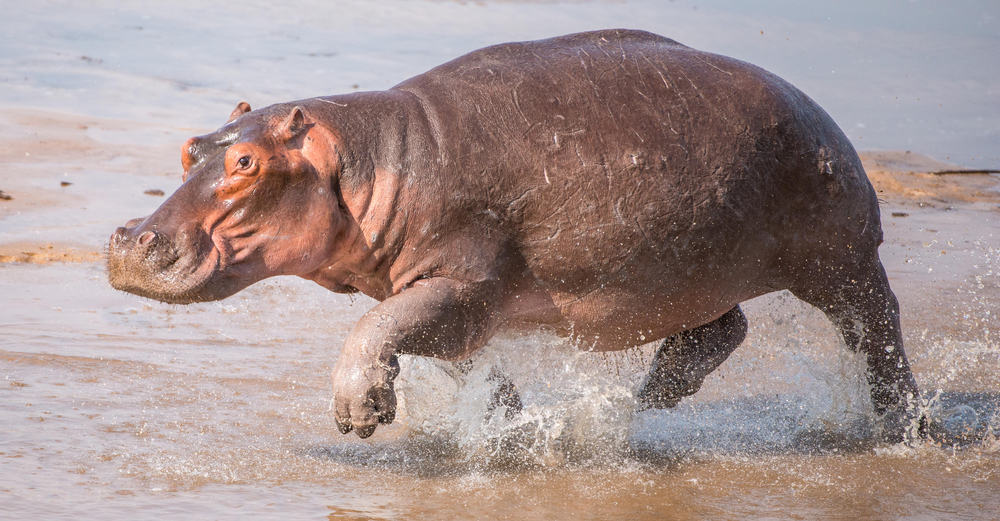 Although they get frightened easily, rhinos do not hesitate to charge at a potential threat, whether it’s another animal or trees or rocks mistaking them to be threats. This is major because rhinoceroses have poor eyesight and can hardly see animals less than a hundred feet away on an open plain. But they make up for it with exceptionally good auditory and smelling senses which help them follow the scent and charge in the direction of it. 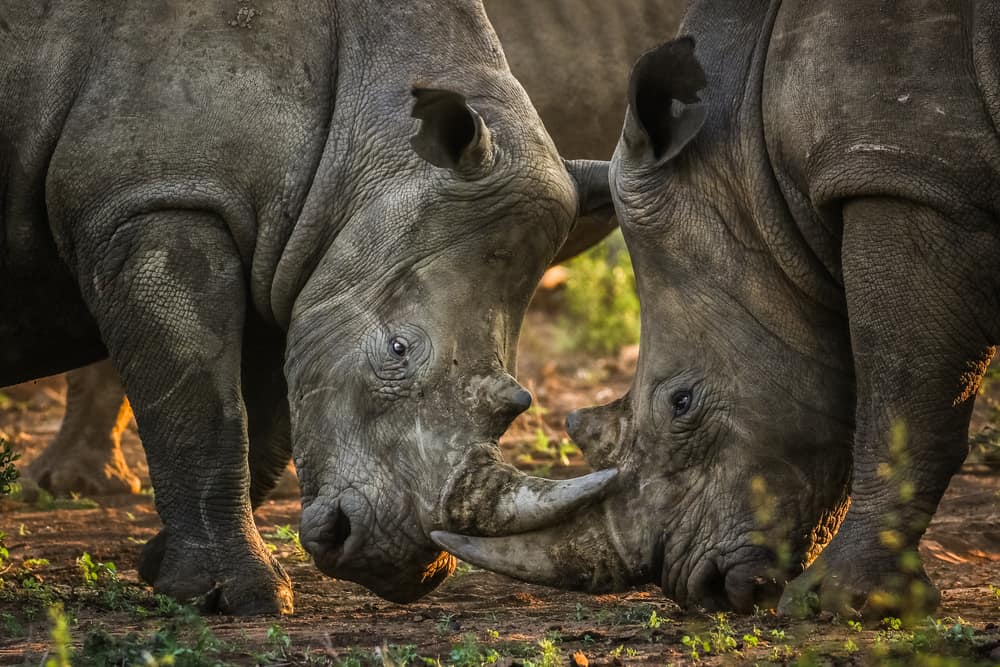 Hippos are aggressive and very dangerous. Their large teeth and tasks are used for fighting off threats. They kill more people annually than any other animal in Africa. Their mouths can open at a 180-degree angle and are supplemented with large canines and incisors measuring up to 1.8 feet (54cm) and 1.4 feet (42cm) respectively. 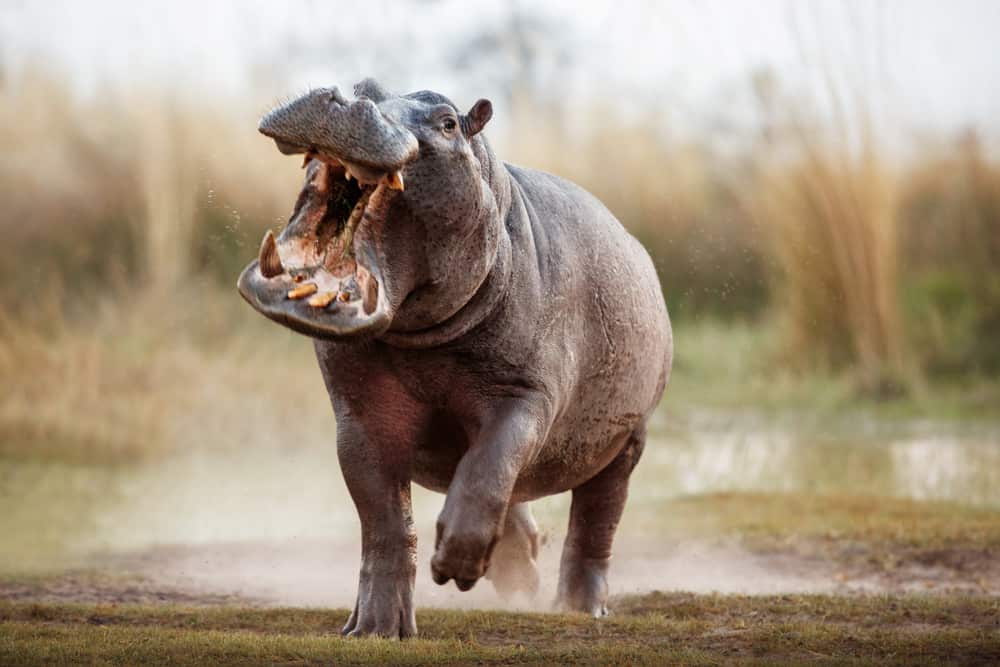 Who is the Strongest? 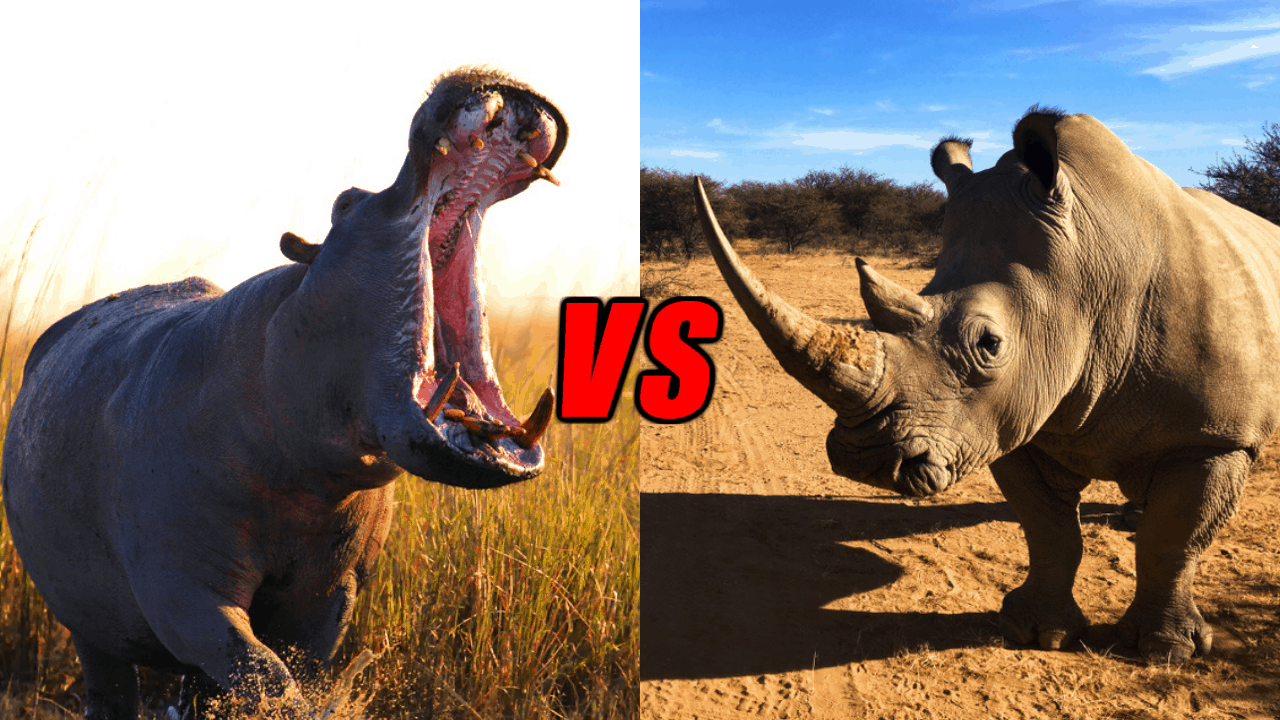 A pound to pound fight between these two formidable mammals can go either way. Rhinos are head battlers. If a dominant male rhino spotted a hippo on his territory first, he would come out on top, having the opportunity to gore at the hippo first. Nevertheless, the rhino horn is sometimes overrated as some are not sharp or strong enough to cause fatal damage. Moreover, a rhino without a horn stands no chance against a fully equipped hippo.

In the water, the poor rhino will lose the battle. The hippo’s tasks and large teeth are far much stronger than the rhino’s horns. More so, the victim has no chance of head slamming the hippo due to a lack of distance. As the rhinoceros tries to swipe its horns over the hippo’s neck, his efforts become futile as the blunt horn cannot penetrate the hippo’s thick hide. The situation leaves the best man with a couple of choices to acquire the crown.

The hippo will either bite down his rival’s head, which could deliver deep wounds through the tasks and large teeth or he would use his bulk force and power to topple the rhino into the mad and drown him, and later devour his vanquished kill. Unless the rhino is brilliant enough to run for his dear life early in advance, the hippo will be the prize winner.