Well, the champion in such a fight is pretty obvious. Both animals live unique lifestyles, with different breeding and feeding patterns. But before we break it down, here’s a quick one: which of these two would you rather be in the face of? The Siberian tiger or the gray wolf.

Tigers are the largest members of the wild cat family and renowned for their power and strength. Among the six recognized subspecies of tigers, the Siberian tiger is the largest of them all and not to mention, the actual ‘Tiger King’. They are powerfully built with an orange base color paler than the rest of the tigers. Their widely spaced stripes are brown rather than black and just like no two humans are known to have identical fingerprints, no two tigers have the same patterns. Their chest and bellies are white and their necks have thick ruff hair, like a mane, to protect them from the harsh cold climate. 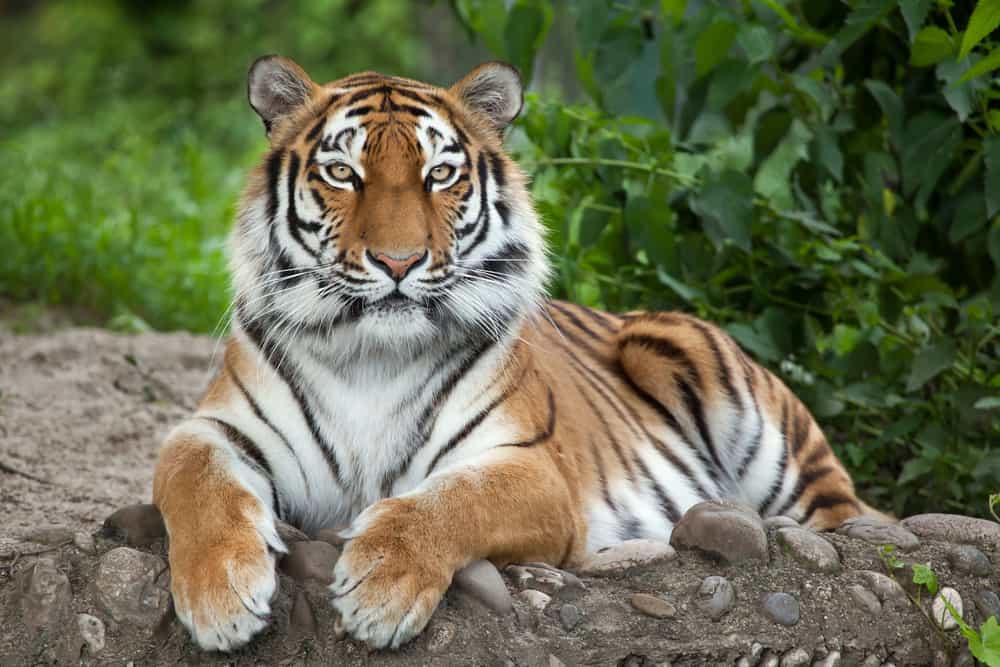 Gray wolves are the largest members of the dog family. They also go by the name tundra wolves, timberwolves, or Prairie wolves. They range in color from grizzled gray or black to all-white or tawny with cream undersides. Some may resemble a large German shepherd. Their tails are long and bushy and during winter, their fur becomes darker around the neck, shoulders, and rump. Males are generally larger than females. 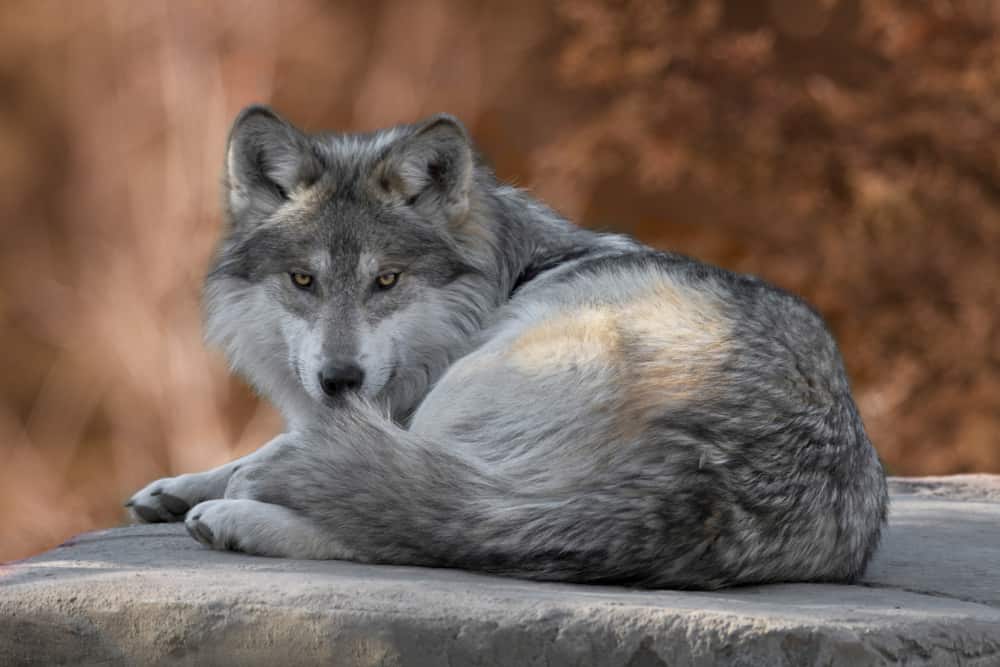 Siberian tigers can grow to about 11 feet (3.3m) in length excluding a 3-foot (1m) tail and stand 3 feet at the shoulder. Their tails are longer than those of other subspecies, which helps them maintain balance when climbing and use it as a rudder when jumping. Adult males can weigh a significant 700 pounds (320kg) while females are smaller in size reaching up to 400 pounds (180kg). 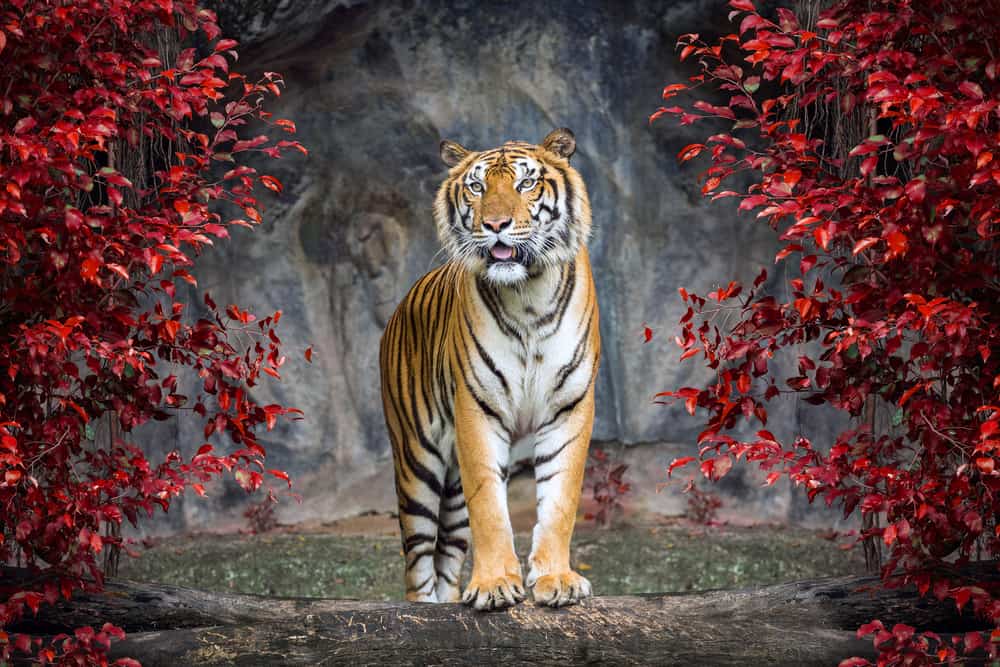 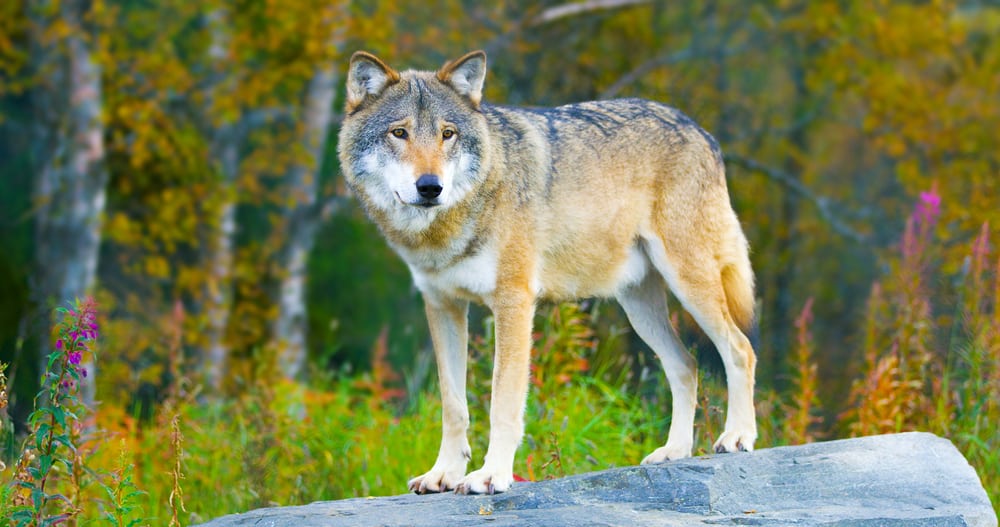 The Siberian tiger, also known as the Amur tiger, primarily lives in eastern Russia’s birch forests. However, some have been known to exist in China and North Korea. They are well adapted for the harsh northern climate with the lowest human density than any other tiger habitat. Northern forests also have the most complete ecosystem allowing these tigers to thrive. 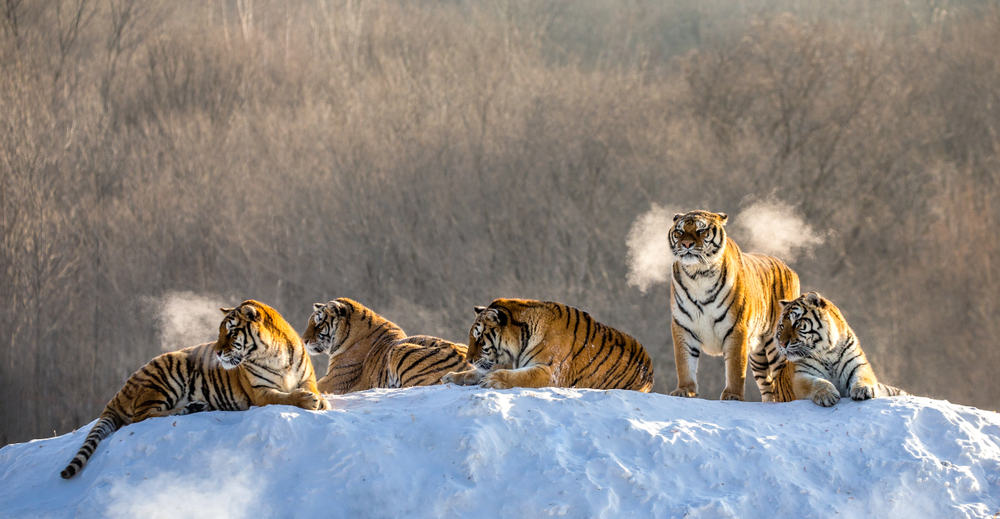 Timberwolves are occupants of the arctic tundra, prairie, woodlands, and arid landscapes. They are distributed in a few areas of Canada and the following parts of the United States; Michigan, Alaska, Wisconsin, Minnesota, Idaho, Montana, and the Yellowstone area of Wyoming. A few have also been sighted in Washington. 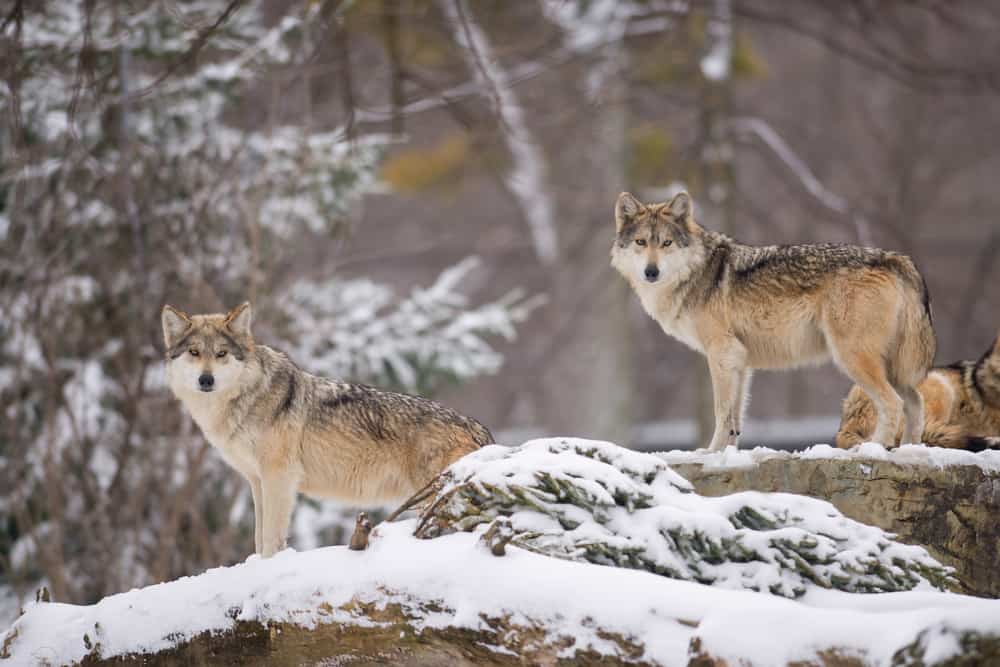 Amur tigers are solitary and territorial cats, only interacting briefly for mating or to share a kill. They mark their territories by spreading their scent on trees to keep other tigers away. They roam many miles and hunt often as tigers are not always successful on their hunts. Just like other species of the tiger family, they do not hunt humans. Even so, they would only attack a human if really hungry or feel threatened though once they try it, the creature can develop a taste for human flesh. This explains why one individual tiger is damned responsible for several human attacks. 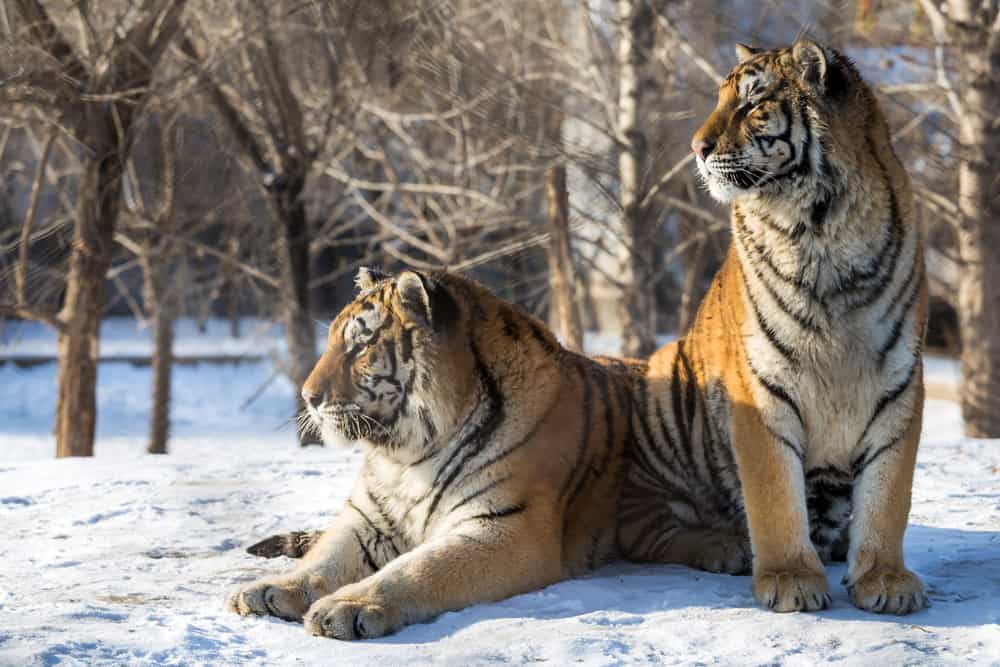 Timberwolves, on the other hand, are social canids that live in packs headed by an alpha pair. The pack is territorial and can occupy as much as 13000 square kilometers marked with urine and feces. It consists of 6-10 members including some of the alpha couple’s offspring and other unrelated individuals. Order is maintained in the pack through an established dominance hierarchy. The alpha breeding pair guides the activities of the group, where the female predominates in care and defense of the pups while the male leads in hunting and the travels associated with the hunting activities. They rarely attack humans but their enmity with human existence developed as a means of protecting livestock. 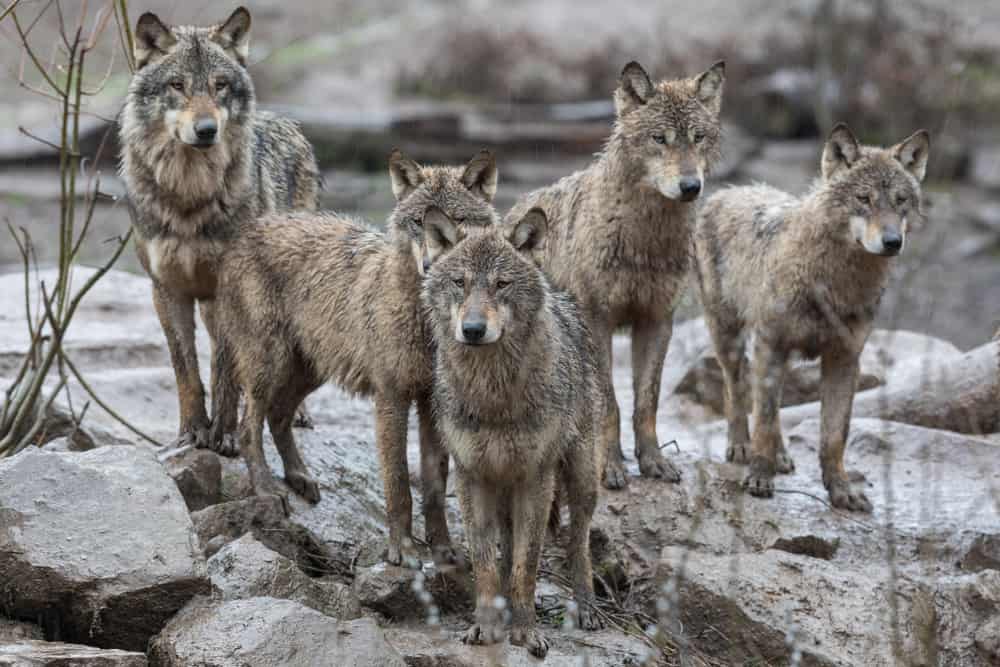 Siberian tigers use visual signals and vocalizations to communicate. According to research done on a spectrogram, tigers’ friendly vocalizations look just like tiger stripes. These are numerous noises called chuffs or prusten, made by keeping their mouths closed and pushing air through the nostrils. Other sounds are grunts, blows, and purrs which can be heard at a distance of up to 400 meters. 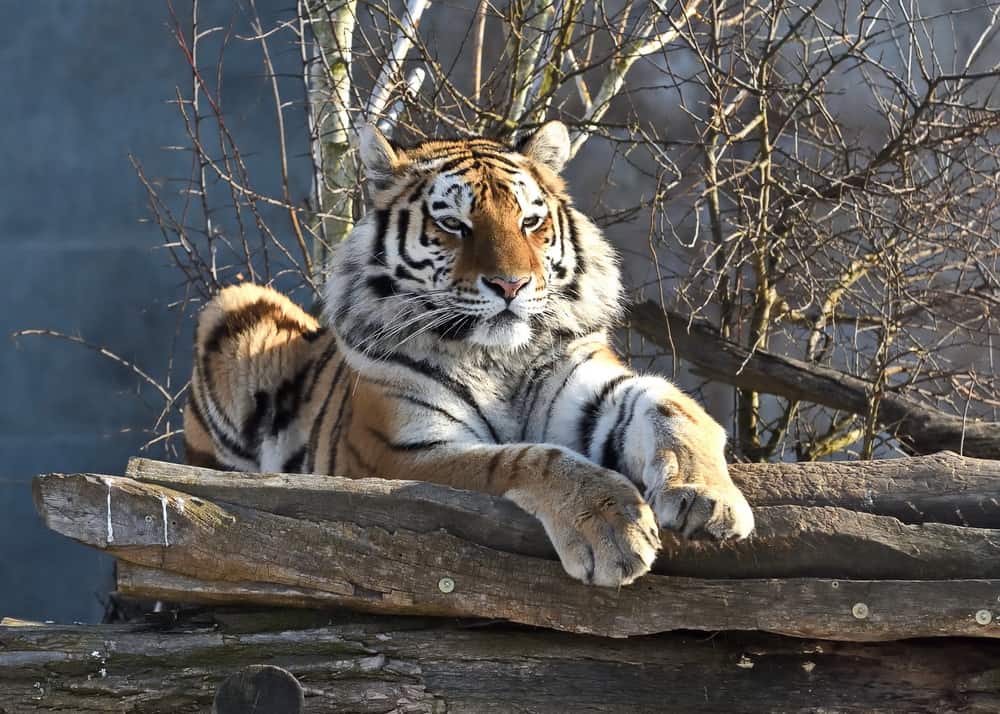 Gray wolves communicate through howling and body language. Howling helps the pack stay in contact and strengthen social bonds. It also asserts territorial boundaries to stray wolves. At night, howls can be heard several miles away. Wolves also let out growls to show dominance or when challenging other wolves. Barks are used as warnings to potential rivals.

Siberian tigers in the wild tend to prey on large prey a couple of times a week and gorge on the whole meal in one sitting. Once they make a kill they drag the victim to a secluded area before they can devour it. They are fierce hunters who feed on wild boars, elks, sika deer, or Manchurian deer. Other times, they may pre on fish in the shallow waters of highland rivers or smaller animals such as rabbits or pikas. When hungry, they can eat as much as 60 pounds a night but are usually lighter feeders. 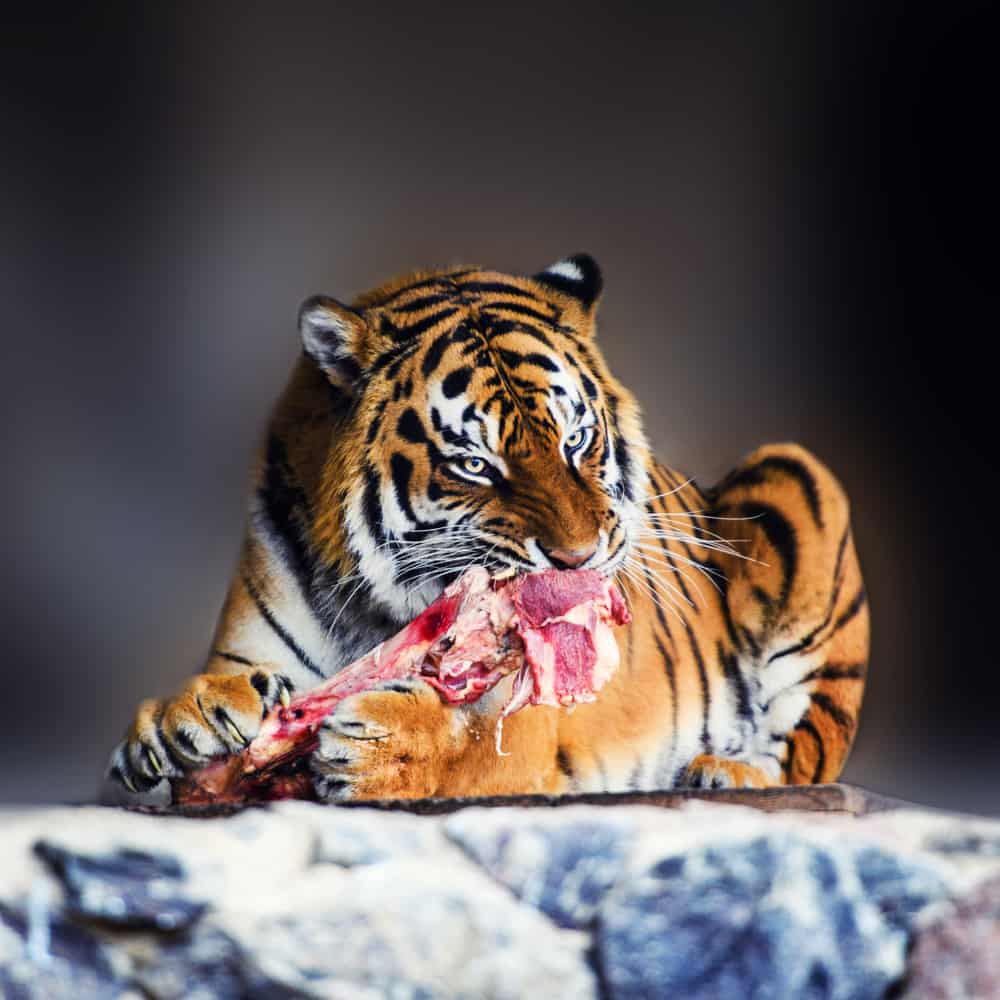 The gray wolf is a predator who feasts on prey such as deer, moose, sheep, goats, elks, caribou, bison, muskox, and other smaller prey like rodents, beavers, fish, and birds. Hunting is often done in packs by both sexes. After a kill, the pack consumes about 7-20pounds (3-9kg) and then lingers, reducing the carcass to hair and a few bones after which they can proceed to seek the next victim in line. 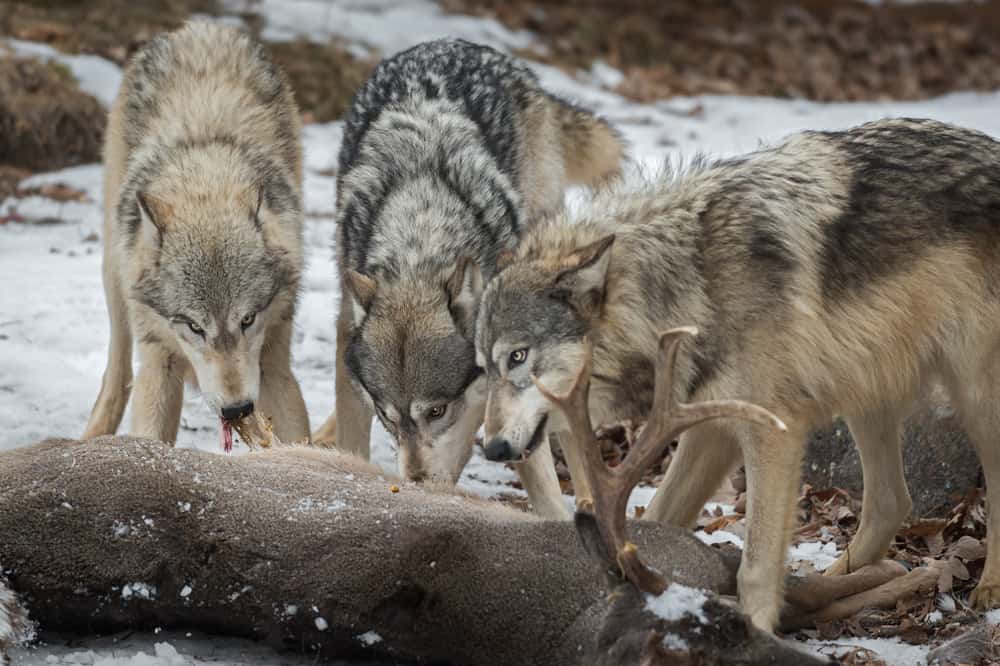 The Amur tiger has the greatest bite force in the cat family. At 1050 psi, they double a lion’s bite force of just a mere 650 psi. 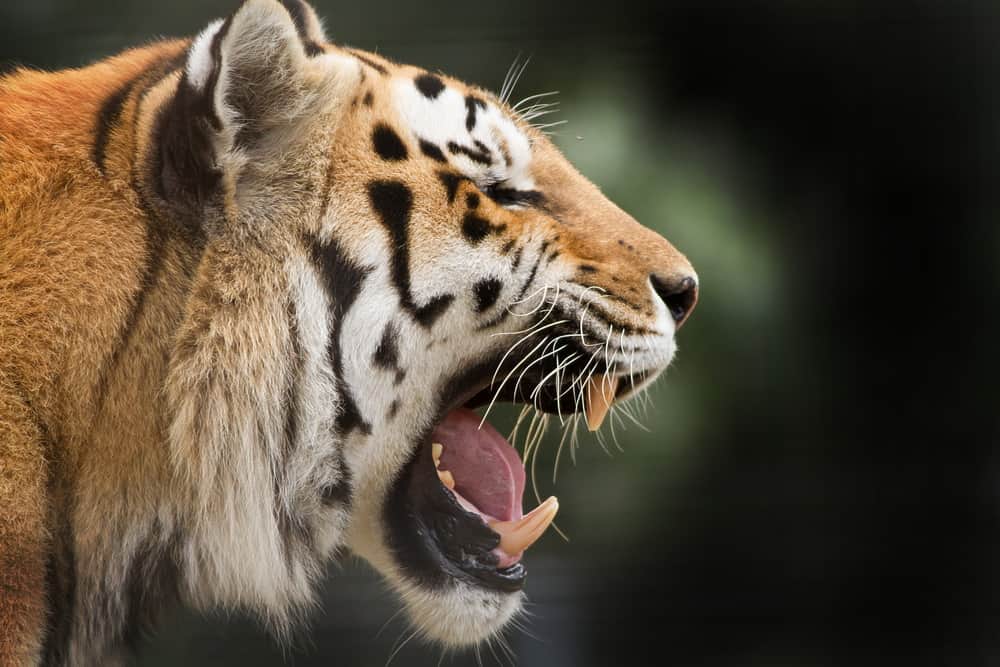 Timberwolves equally hold a tremendous bite force of 1200 psi. They can bite through a moose femur in just two or three bites. With regards to size, some have also been recorded to have a biting capacity of 1500 pounds of pressure per square inch. 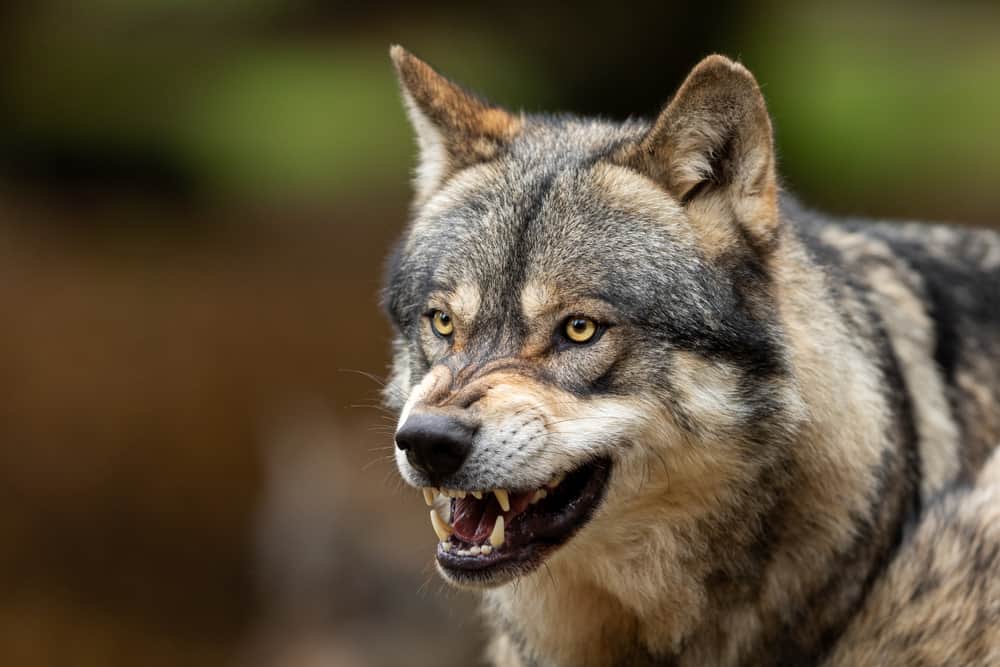 Tigers have stocky, muscular bodies with legs so powerful they can remain standing even when dead. While hunting, they can reach speeds of up to 60mph (96kph) in short bursts. Their stocky physique enables them to leap over distances of 19 feet (6m) and jump up to 16 feet (5m) vertically. 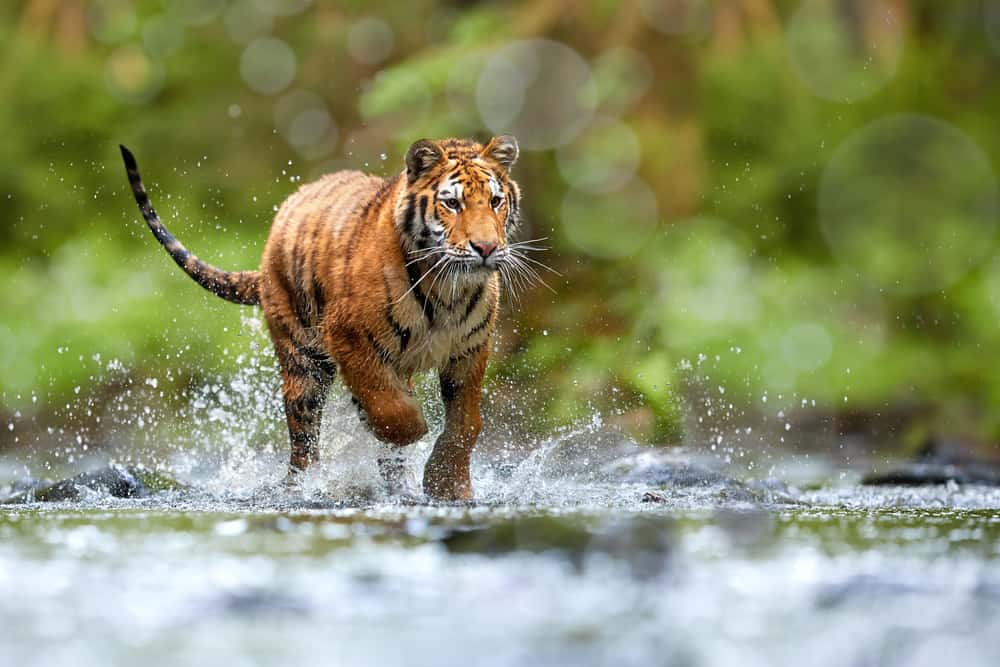 Gray wolves are renowned for their impressive stamina. They can trot at 6mph (10kph) for a very long period of time. Even so, they are also fast runners, reaching top speeds of 43mph (70kph) over short distances. 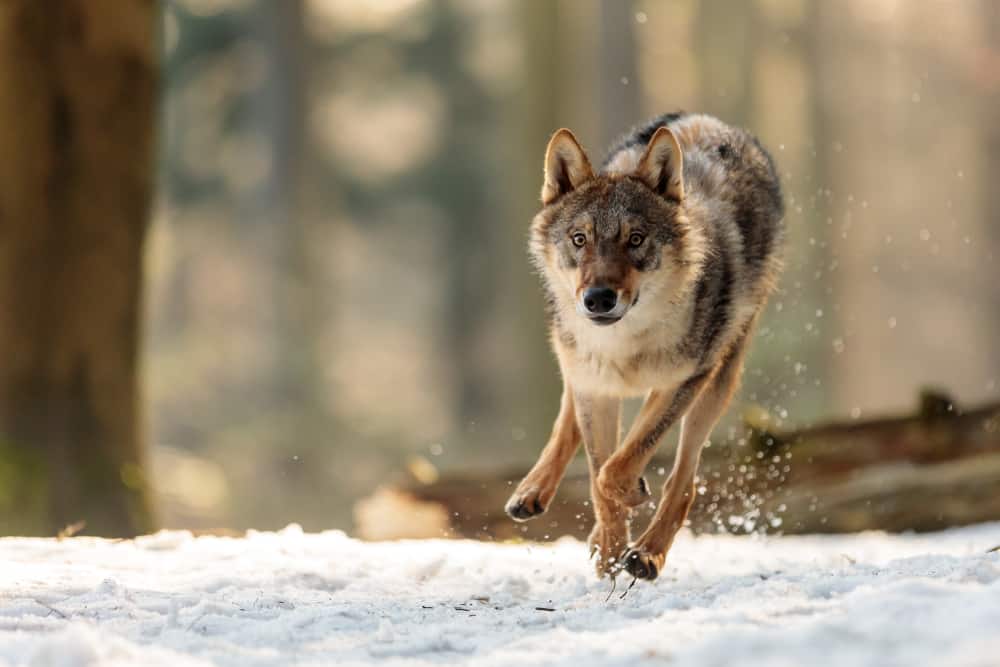 Due to their magnificent coats, Siberian tigers can camouflage and hunt in stealth. They are ambush predators who lie in wait and creep close enough to their victims before launching a quick fatal pounce. For one who has had an encounter with a bear, well, tigers are even more intelligent and technical. One swipe of their paws is strong enough to smash a bear’s skull or break its spine. 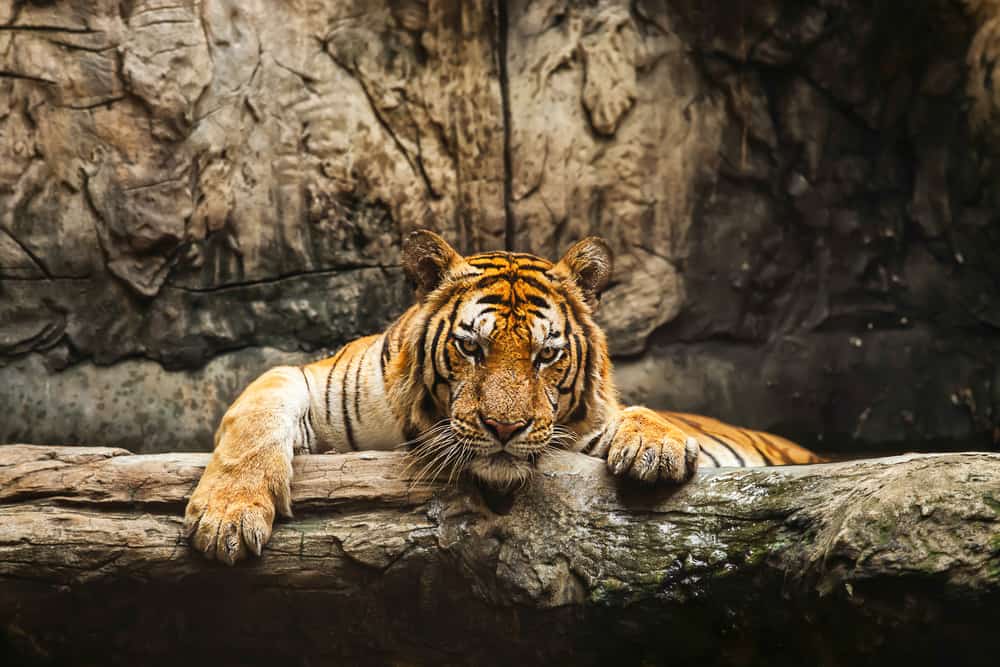 Gray wolves attack hoofed animals from behind to avoid potential injuries from forehooves. For the smaller game, they launch their attack from the front. Since hunting is every member’s specialty, some pack members bite the shoulders and flanks, others attack from the rear, while others seize their victim with a suffocating bite on the neck. 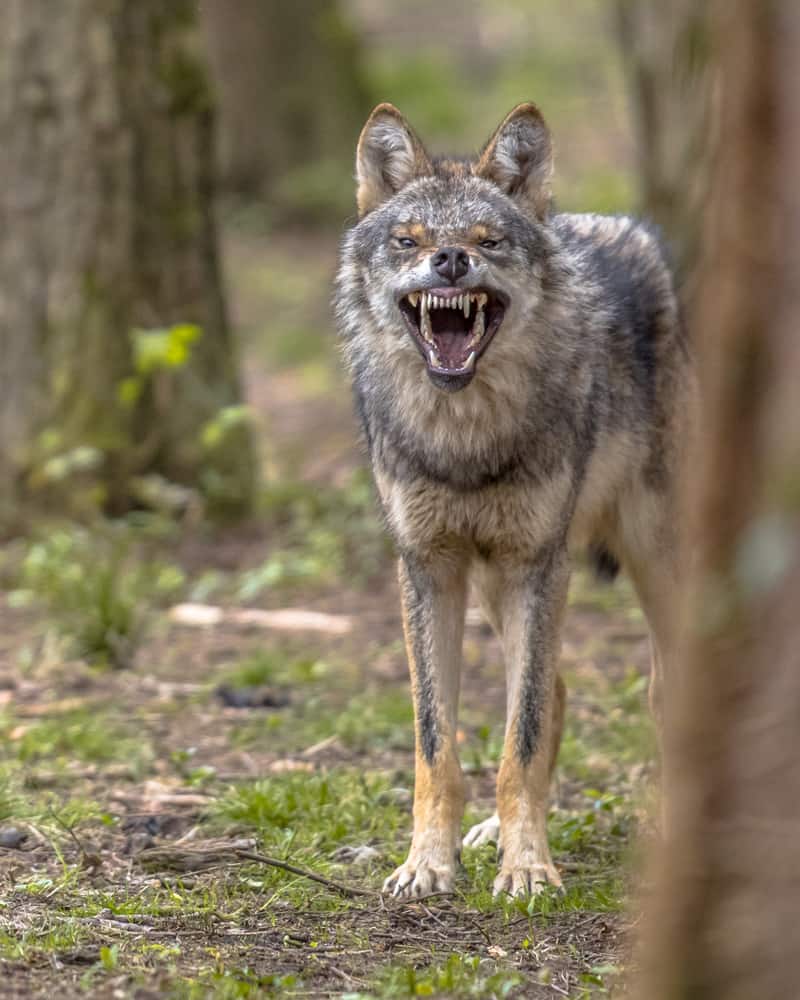 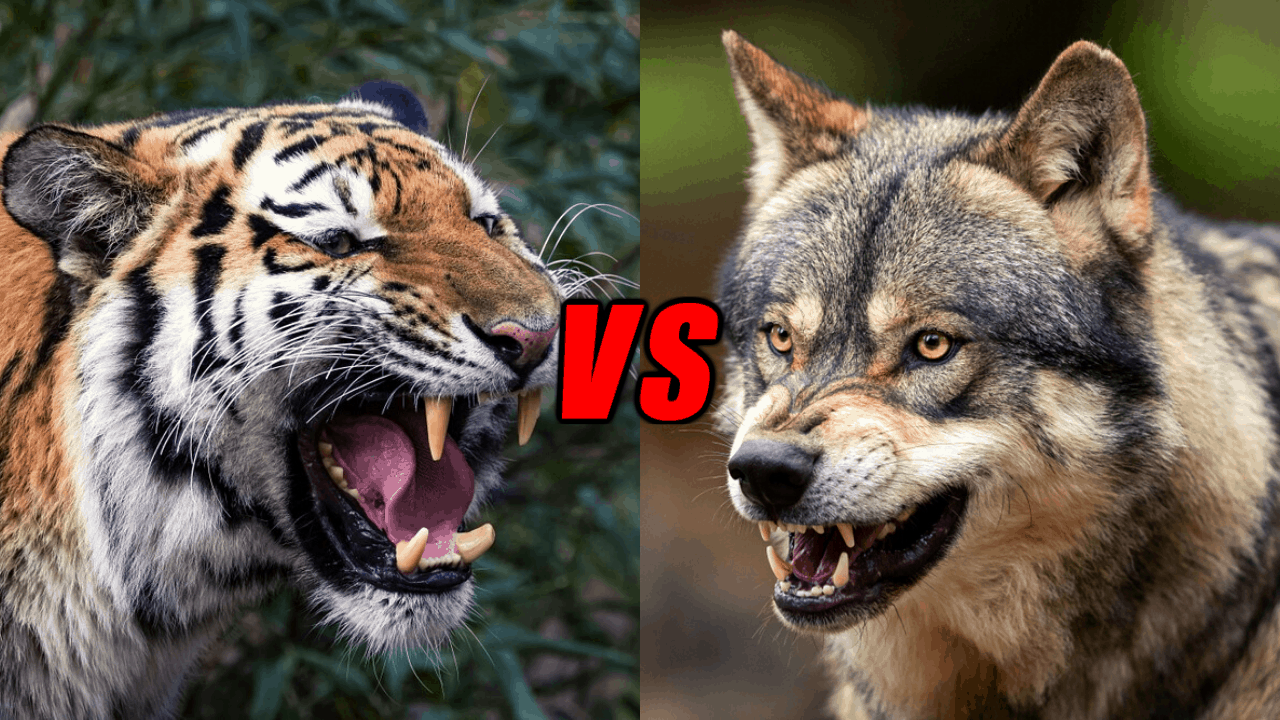 For starters, the larger and stronger individual has the upper hand. The Siberian tiger is physically larger than a gray wolf. Also, it is more potent in terms of claws and paws alignment while a gray wolf can hardly use its paws in a fight. For two males on the battleground, the Siberian tiger has higher chances of emerging the victor.

However, the stamina of the gray wolf should not be underrated. Though smaller in size, gray wolves are damned with fight stamina and would last long in a battle compared to the tiger. This is due to the fact that tigers are ambush predators while wolves are endurance hunters. Gray wolves slowly wear down their prey until there’s not much of a fight left in them. Their exceptionally large biting power of 1200psi is also an advantage, although before delivering a bite the Siberian tiger’s stupidly powerful, clawed, and muscular front legs would have done a substantial amount of damage to the gray wolf’s body would have to run for its life.

Despite the timber wolf’s stamina, the Siberian tiger would remain the master as most fights wouldn’t even last more than a minute or two. Unless the gray wolves capitalize on numbers, only then can they stand a chance to emerge as winners but their Siberian counterparts will not go down easy.