Who between these two lethally venomous serpents would outwit the other? Share your thoughts with us in the comment section below.

There are two species of the green mamba; the eastern green mamba and the western green mamba. The eastern green mamba is a bright green venomous snake that is often confused with the harmless green snakes of the genus Philothamnus. Their western cousins have a yellowish-green to the green dorsal surface, with yellow scale margins and tails. Green mambas are the smallest of the 4 species of mambas, with adults ranging from 6 to 7 feet in length. Although, they may occasionally attain 8 feet with a very slender body with a long tapering tail. They have a flat-sided head that is often considered to be coffin-shaped. 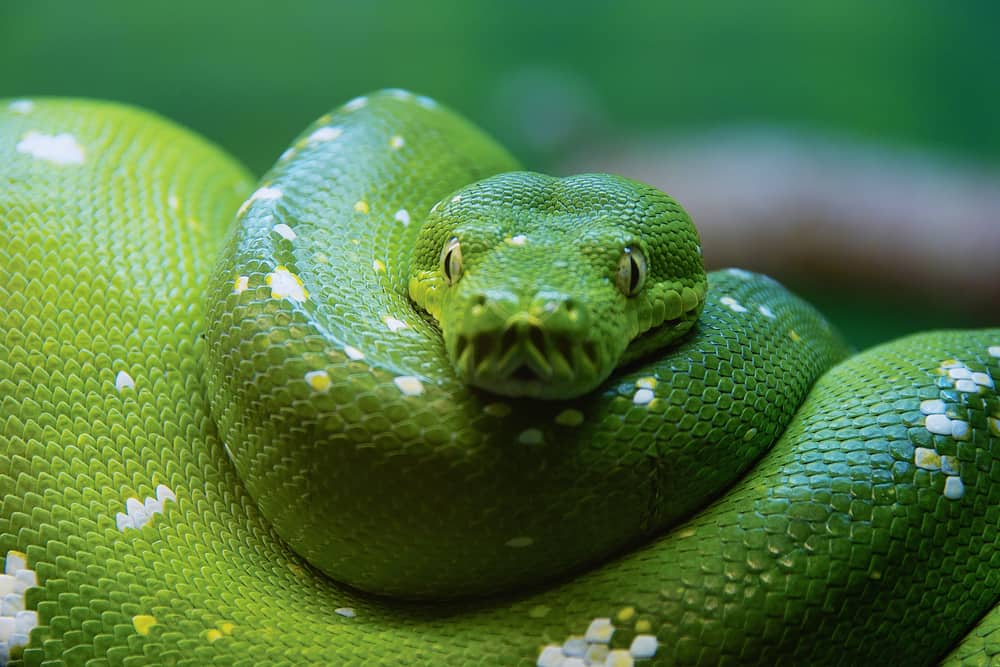 Their counterparts, the black mamba is Africa’s longest venomous snake reaching up to 14 feet in length. However, their average size is 8.2 feet. Just like the green mambas, black mambas get their names from their skin color which ranges from olive to gray topped up with a blue-black color of the inside of their mouth, harboring fangs of up to 6.5 mm (0.26 inches) in length. 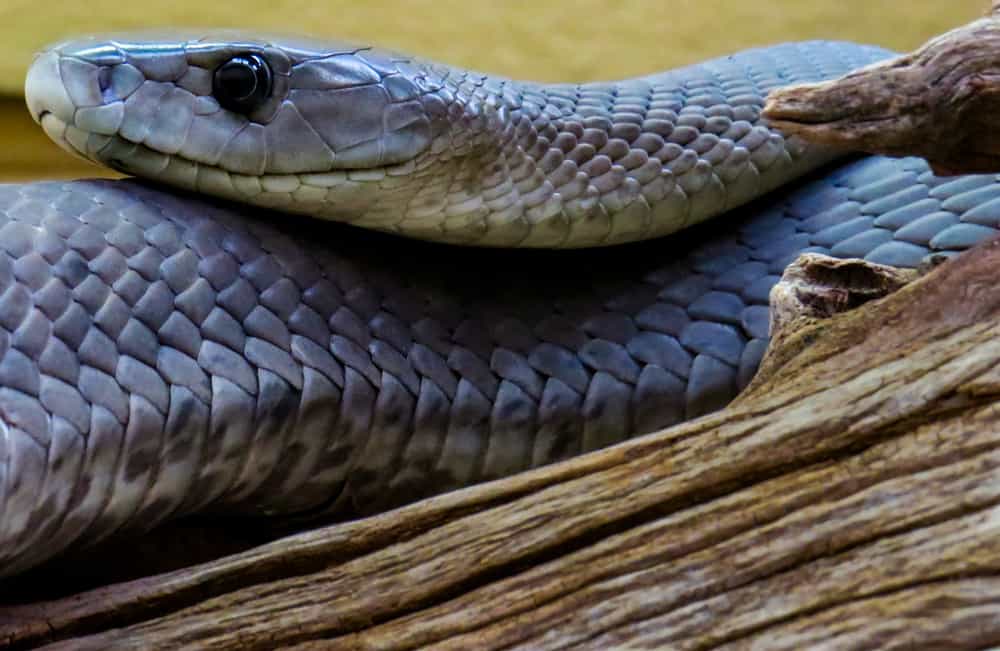 Green mambas primarily live in trees and inhabit the coastal regions and are usually found within a few kilometers of the sea. They can be located in Africa, southward from Tanzania to the KwaZulu-Natal province, and the extreme northeastern parts of the Eastern Cape. They spend most of their lives in dense coastal vegetation as well as the woodlands. 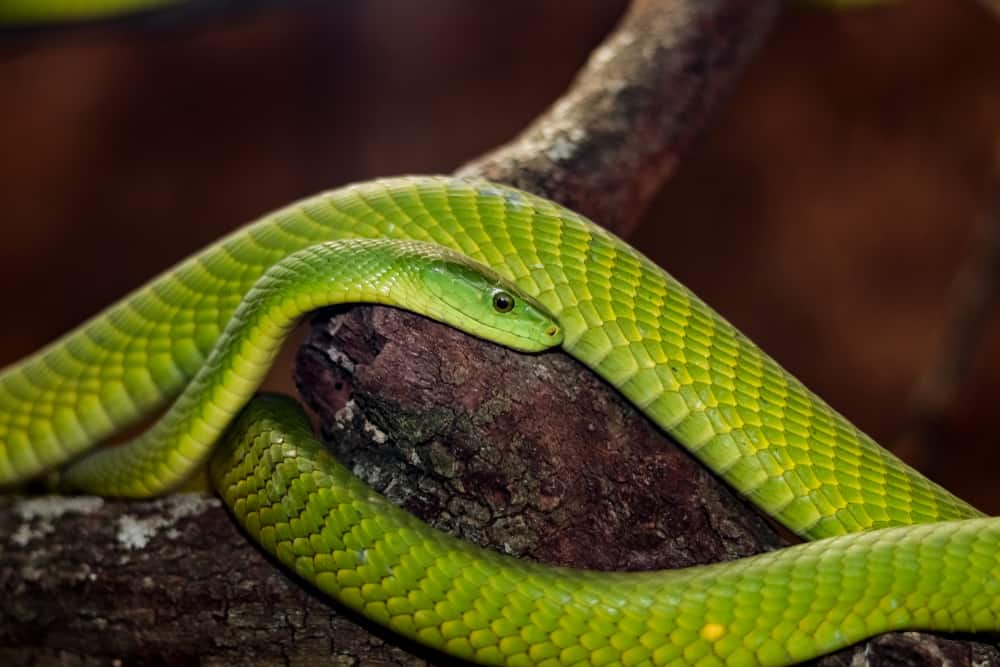 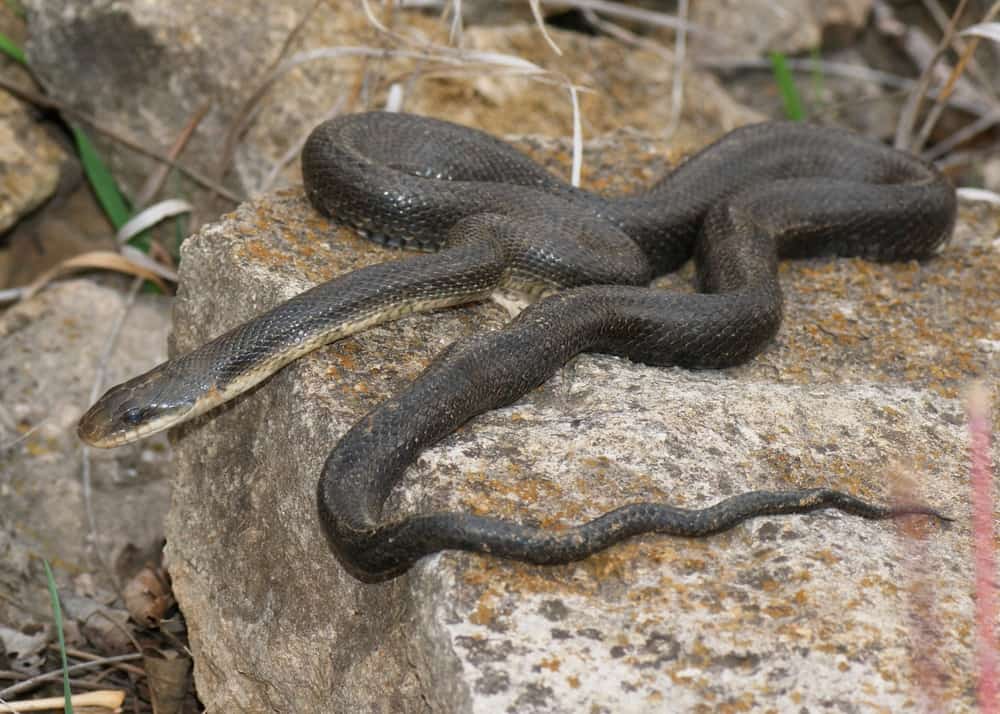 Green mambas can live up to between 13 to 18 years. Other than their growth factor, juvenile and adult green mambas are differentiated through their venom toxicity. For the eastern species, juves have a distinct blue-green color which later turns bright green. Also, their teeth have a distinct pattern when young whereas adults may be unornamented.

The black mambas have been recorded to achieve 11 years in the wild. However, in captivity, black mambas can live up to 20 years of age. Juveniles tend to be paler than adults but their color darkens as they grow older.

The green mamba is a diurnal species, active by day and sleeps at night, coiled up in foliage or a hollow within the trunk within the trunk or branch. They are rarely found on the ground though they may come down to bask in the sun. Green mambas are solitary, except during the breeding season where males locate females by following a scent trail. On average, they can move only about 18 feet (5.4 meters) per day. 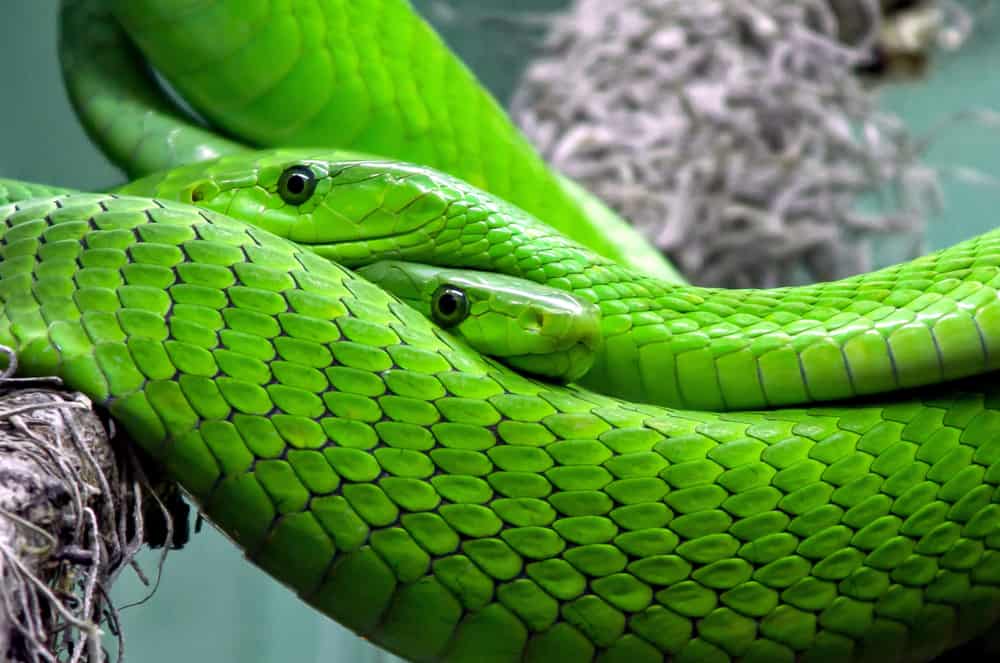 Black mambas, on the other hand, is both a terrestrial and arboreal creature. While on the ground, the black mamba moves with its head and neck raised. Unlike the green mambas, they live in pairs or small groups and are diurnal. They can bask for long hours, returning daily to the same spot. Being agile creatures, black mambas can move quickly and are usually provoked by perceived threats such as blocking of its paths and the ability to retreat. 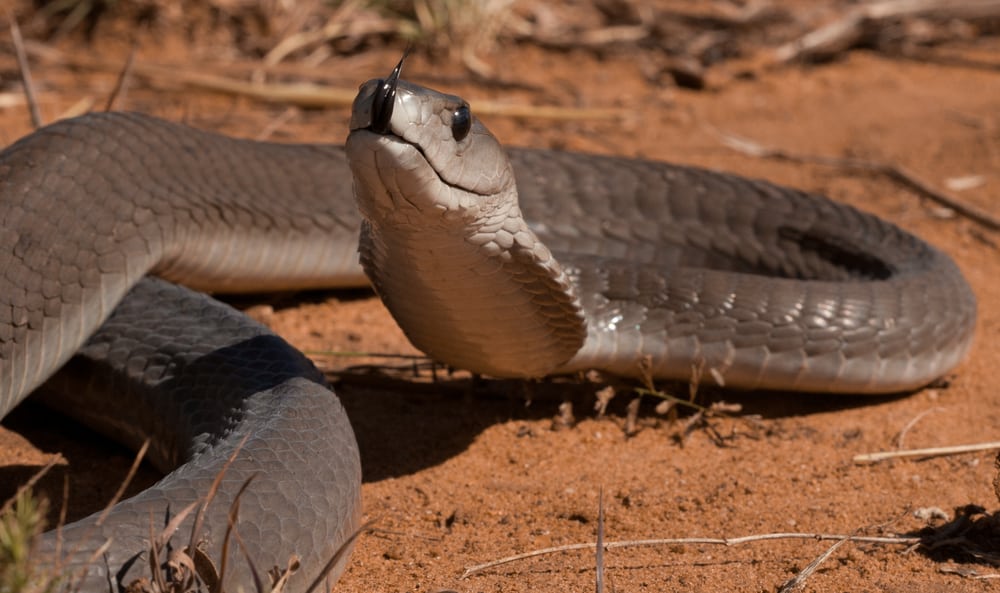 Almost all snake sounds are made in defensive interactions. Although staying quiet and hiding is their main defense, they growl, hiss, rub scales, shriek, rattle, or make raspy noises when they feel threatened. Most often than not, such noises are succeeded by an attack. The moment you hear the hiss, the best option is to back off. Their hisses might seem the same but research shows that they differ between species. The green mambas let out a hollow hiss while their counterparts, the black mambas, let out a loud hiss preceded by raising their body with cobra-like neck-flap and menacingly showing their black mouths.

Green mambas primarily prey on birds and their eggs, and small mammals such as bats. They can also devour arboreal lizards. While hunting, they camouflage with the green leaves, and use a sit and wait for a strategy for highly mobile prey such as adult birds or rodents. Although, they have actively hunted sleeping bats. Green mambas have been known to raid the nests of young birds and as they grow, so does the size of their prey items increase. 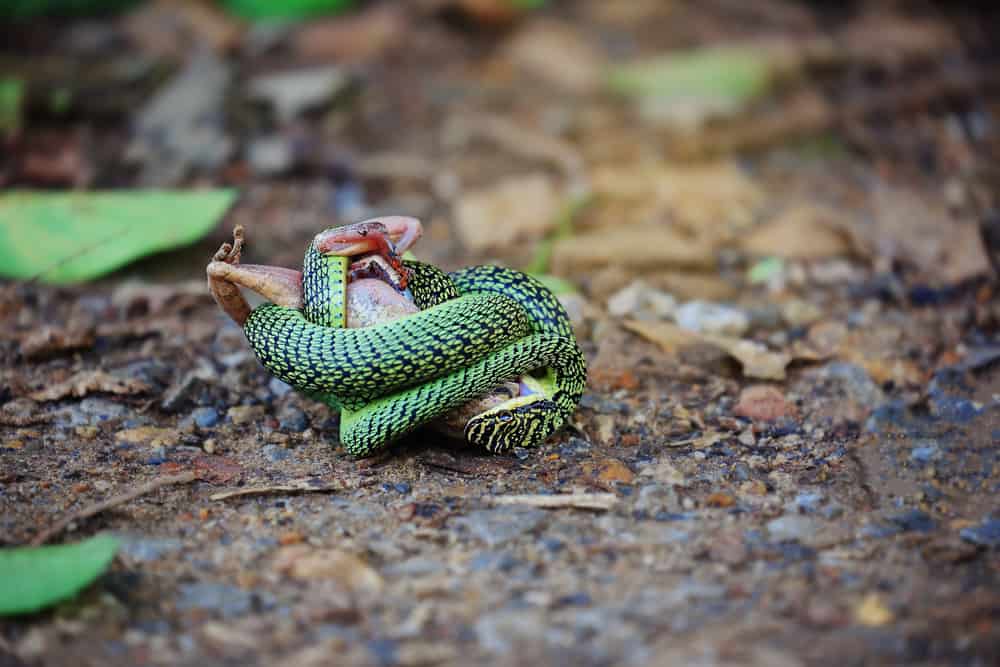 Black mambas hunt from a permanent den, where they will regularly return if there’s no disturbance. They prey on small mammals such as rodents, bats, bush babies, and hyraxes, as well as birds, particularly nestlings. They bite their prey to inject the venom and release it, keeping a close distance till when it becomes paralyzed and ready to eat. They swallow whole as they possess flexible jaws that can dislocate to fit food up to four times the size of their heads into their mouth.

In comparison to other snake species, these snakes have a high metabolism rate and would feed more than twice a week. 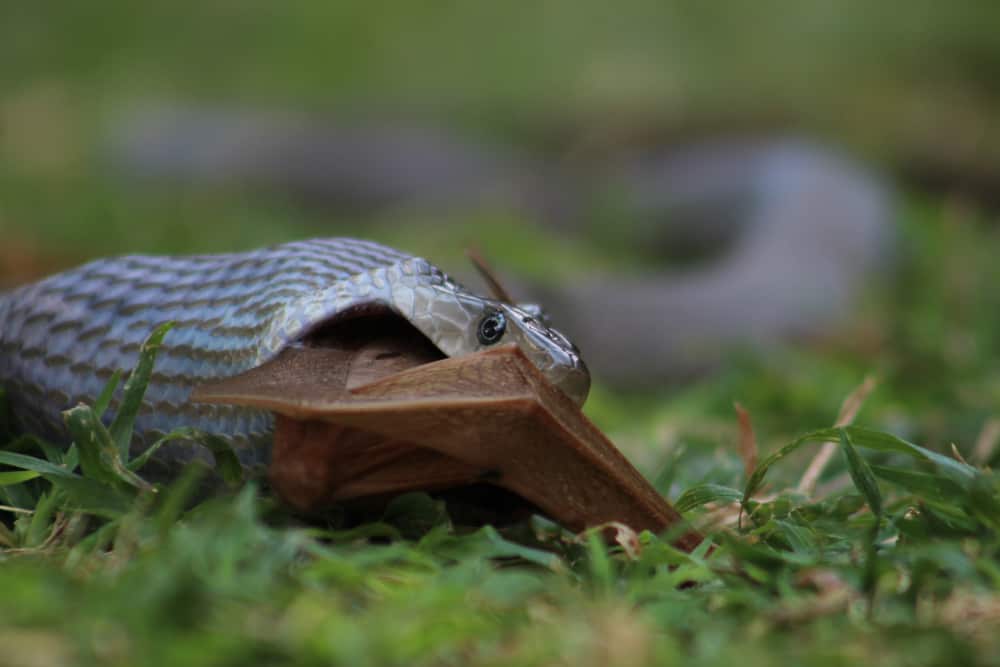 The eastern green mamba is the most commonly encountered member of the green mamba species and has the least toxic venom. But the westerners are somewhat ‘antisocial’ and do not often cross paths with humans. However, the green mamba’s venom, 60-95mg by dry weight per bite, is neurotoxic and causes swelling, dizziness, and necrosis, succeeded by difficulty in breathing and swallowing, to an irregular heartbeat and convulsions. It can kill a human in 30 minutes being the fastest acting snake venom. This venom contains predominantly three-finger toxin agents and a little phospholipase A2 content. 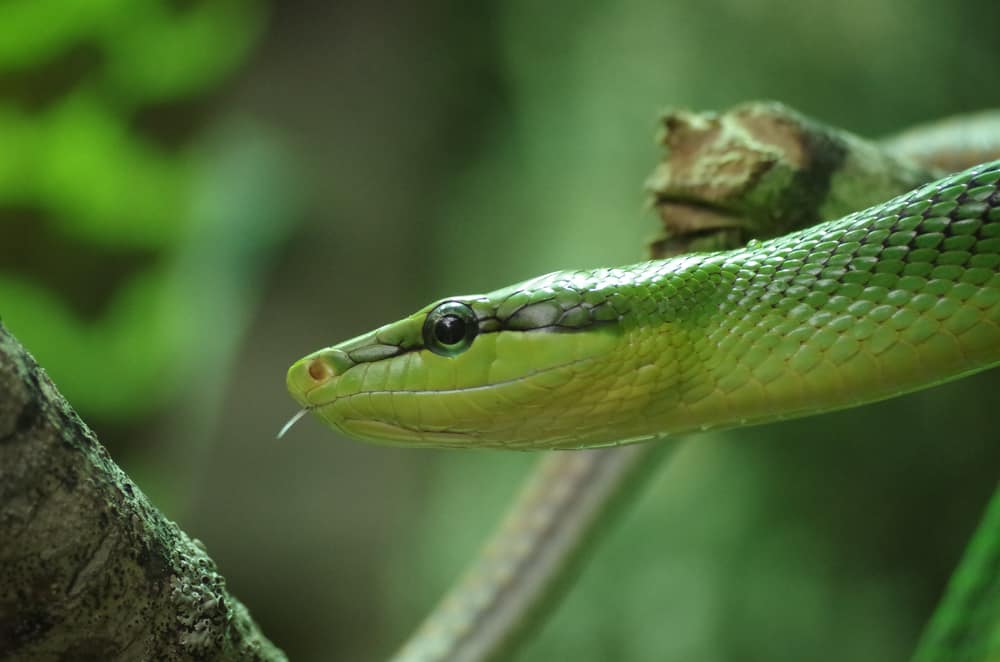 In contrast, the black mamba venom is the highest in toxicity and differs from all the other mambas. Their bites averagely contain 100-120mg of venom and do not generally cause swelling or death of body tissue but are preceded by a tingling sensation in the area of the bite. This snake bites repeatedly, releasing prey and creating multiple puncture wounds hence the rapid distribution of their venom. Other symptoms include diminished vision, fasciculations, loss of consciousness, and respiratory paralysis in less than 30 minutes after injection. Without appropriate antivenom treatment, its bite can kill a human within 3 hours or more. 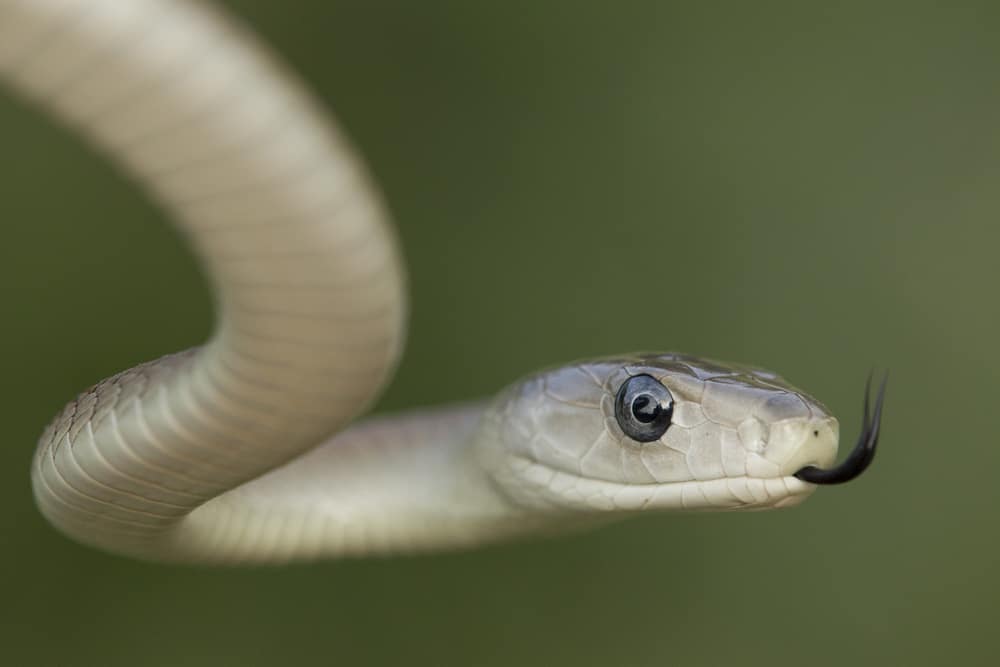 Unfortunately for the green mambas, no evidence has been recorded of their migration. They are sedentary and can remain in the same location for days at a time, moving only to find food or mates.

However, black mambas are among the fastest snakes in the world, slithering at speeds of up to 12.5 mph (19 km/h) over short distances.

Green mambas are timid and graceful snakes that avoid human contact to an extent of retreating if disturbed. But when consistently bothered they will launch a defensive bite, delivering a potent dose of venom.

Black mambas are crowned with agility and will not hesitate to attack to defend themselves. They will not only strike once but repeatedly, delivering large doses of lethal venom with each strike. They produce a loud hiss and after striking, they slither away as fast as possible. When launching an attack, they can raise their heads to 3 or 4 meters forming a flattened ‘hood’. 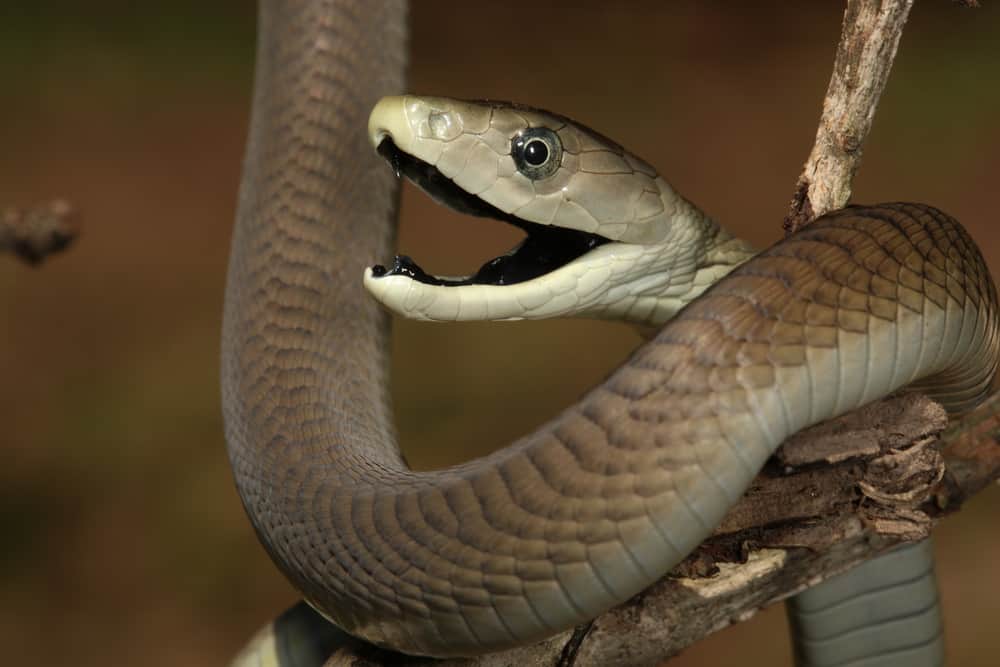 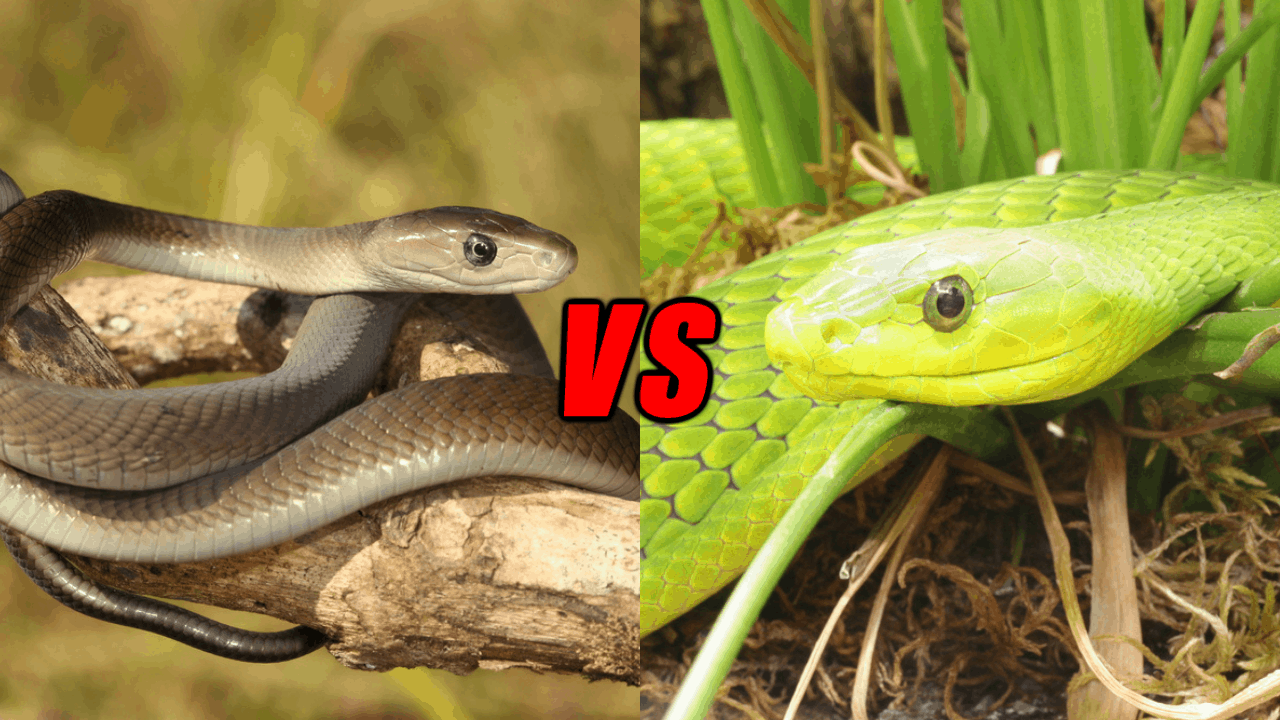 Though found in slightly different ecosystems, a fight between these two would be one to behold. The black mamba is more ground-based, experienced in hunting in thickets and grass. They are also fast runners, acquiring the speed advantage against the green mambas.

Green mambas slither away at the sight of trouble while black mambas are more vicious, grazing their fangs at potential trouble without hesitating to launch their attack. Combat would, therefore, place the green mamba on the losing side as his counterpart not only has the body size advantage but also flares in agility and speed.