There are tons of dog breeds around the world. Choosing which one goes well with you requires quick research about them. Temperament, history, and looks are some of the things that you may want to consider. Today, let’s get to know more about the dog breed that inspired literature, poetry, mythology, and even video games — the Irish Wolfhound.

Irish Wolfhound, as its name suggests, is a historic gazehound dog breed from Ireland. It is mostly described by its historical motto, “gentle when stroked, fierce when provoked”. With its average size being taller than Great Dane, many would-be scared to approach them, but most wolfhounds are actually very gentle with children. Wolfhounds are friendly dogs, even with strangers. Yet when they sense a potential danger that may harm them or their family, they display a fearless nature.

According to Dansey, the early 19th-century translator of On Coursing, Irish and Scottish “greyhounds” were derived from the same ancestor, the vertragus.

In the 18th century, Irish Wolfhounds were known for their great size, immense strength, greyhound shape, and rarity. In 1790, Bewick describes this dog breed as the largest and most beautiful dog kind. Its strength is so enormous that in combat with Mastiff or Bulldog was far from being part. However, Thomas Pennant (1726-1798) revealed that he could find no more than three wolfdogs when he visited Ireland.

Since the original dog-type was concluded extinct by the most knowledgeable authors, Captain George Augustus Graham created the modern Irish Wolfhound breed. Into the mix were the biggest and best examples of the Scottish Deerhound, the Great Dane, and Borzoi (also called the Russian Wolfhound). Graham formed the modern Irish Wolfhound breed which retained the appearance of its original form, but not its genetic ancestry.

Generally, Irish Wolfhounds have a rough, double, hard coat. Its hair around the eyes and under the jaw is wiry and long. A pet-quality Irish Wolfhound may have a softer and longer coat. 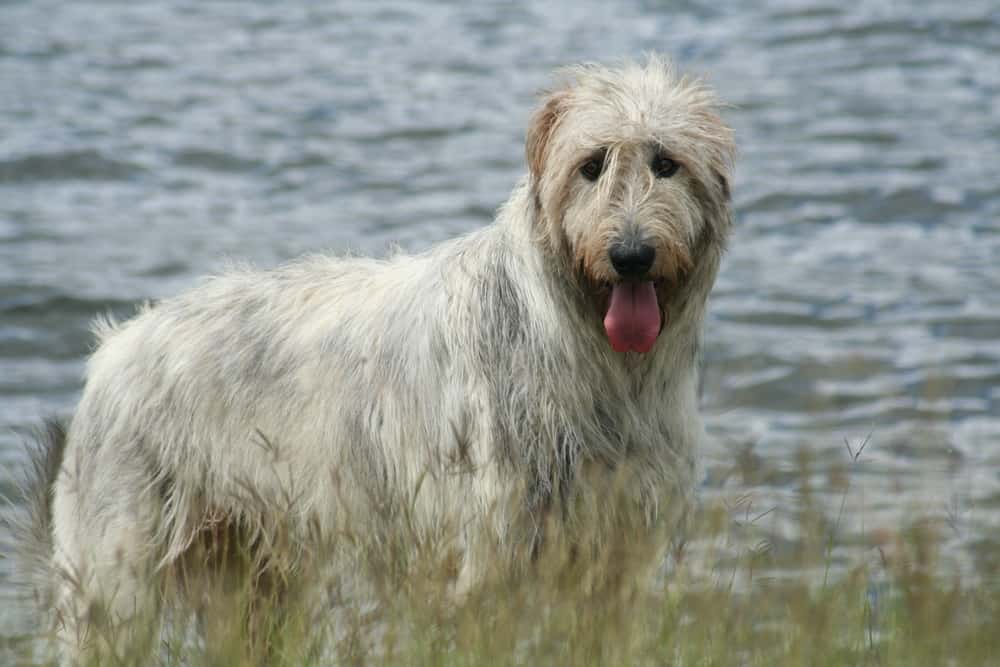 Irish Wolfhound is considered to be the tallest of all dog breeds by the American Kennel Club. Generally, they are a Greyhound-like breed – very muscular, strong yet graceful, movements are easy and active, head and neck up high, the tail in an upward sweep with a slight curve at the end. 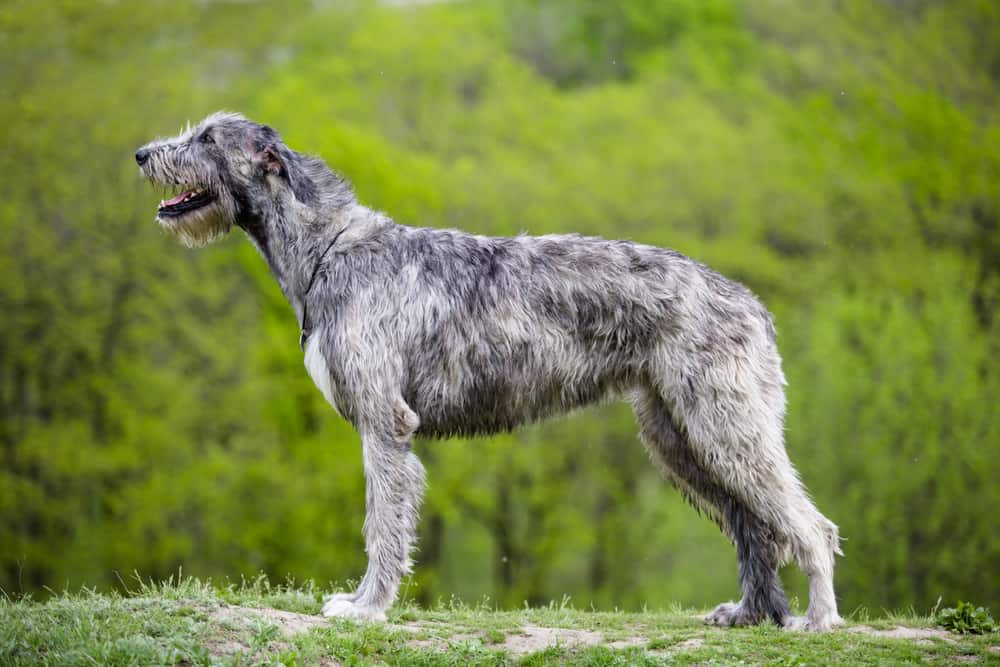 Just like the other large dog breeds, Irish Wolfhounds have a relatively short lifespan. It is a short-lived breed with a lifespan between 6 to 10 years, with 7 years being the average.

With its rough and hard coat, Irish Wolfhounds shed throughout the year, but not to an extreme degree. A thorough brushing at least once a week will help remove dirt and loose hair, keeping the dog in his best version. Irish Wolfhounds don’t “blow out” their coats during an annual or semi-annual shedding season.

Just like any other dogs, Irish Wolfhounds have a wide range of personalities, but most often known for their personal quirks and individualism. Despite their huge size, Irish Wolfhounds are rarely known to be destructive or boisterous in the house. The reason for this is because they’re naturally introverted, intelligent, reserved, and quiet.

It is natural for Irish wolfhounds at play to course another dog. This is a hunting behavior, not fighting or dominating behavior.

Irish Wolfhounds are often loved for their loyalty, affection, patience, and devotion. They are generally friendly, even to strangers. But once they sense potential danger, they will show fearless nature to protect themselves and their family.

Aside from their natural behavior, temperament is also shaped by raising and training. 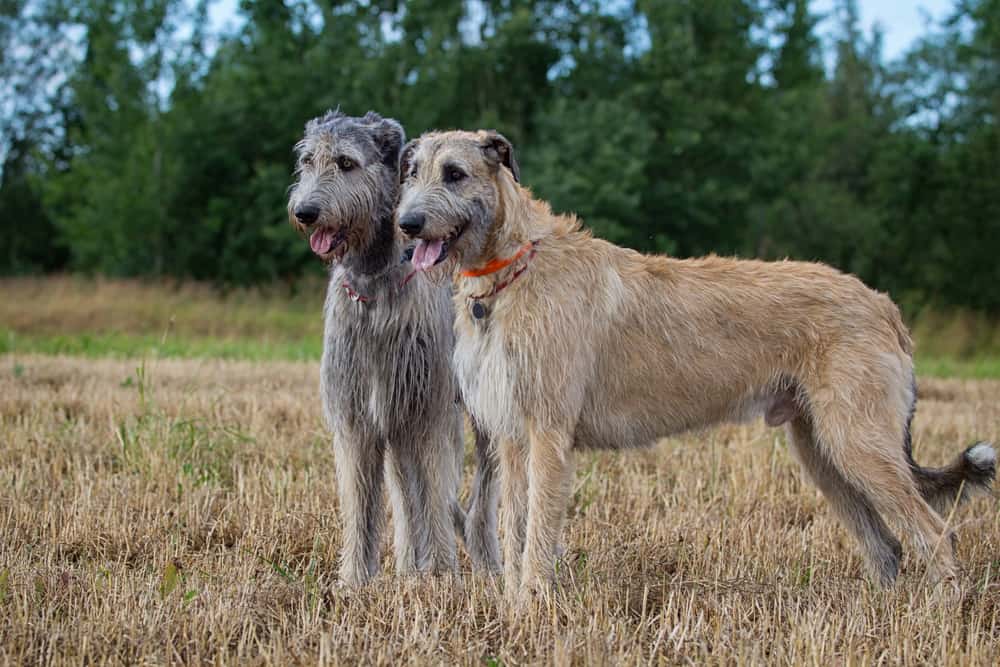 If you are a consistent owner and use positive reinforcement techniques like food rewards and praises, it will be relatively easy to train Irish Wolfhounds since they are intelligent. They’re generally easy to housetrain, and a crate can help, although it shouldn’t be overused.

According to pet experts, Irish Wolfhounds score 4 out of 5 on the scale of intelligent dog breeds. 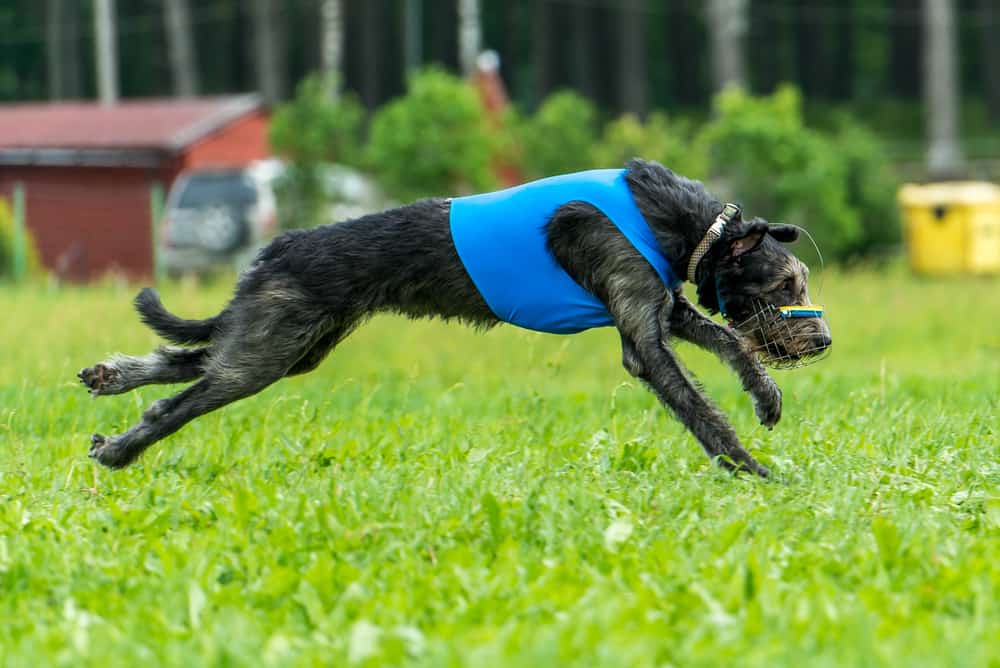 Like all sighthounds, Irish Wolfhounds are used to chase game by speed. In history, it also specialized in protecting humans and hunting wolves, making it a guardian dog. Its structure appears as if it is fast enough to catch a wolf and strong enough to kill it. The speed and power of this breed should never be underestimated. 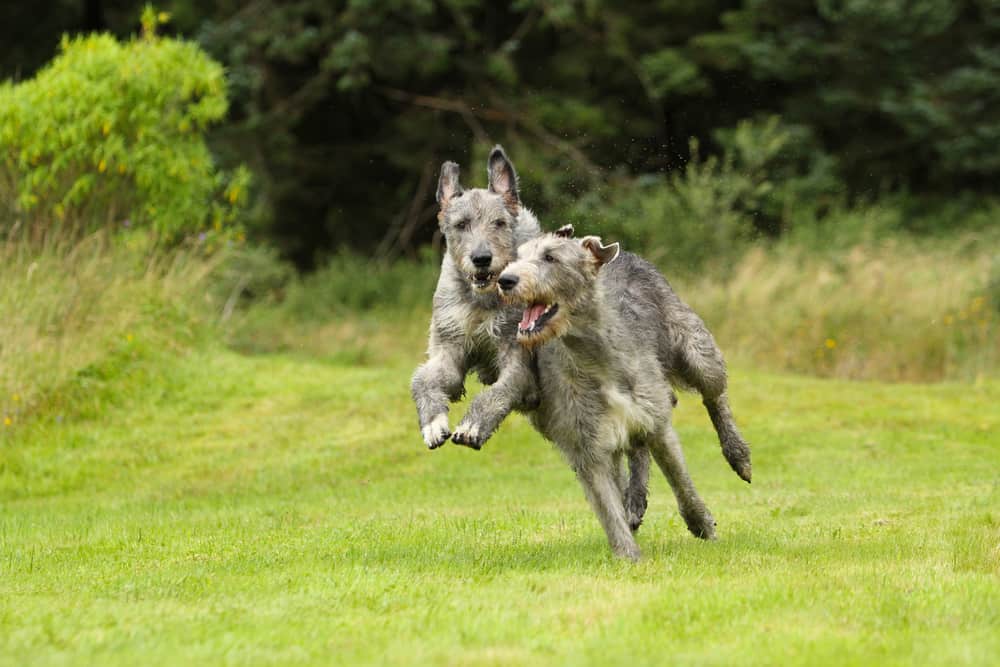 Since Irish Wolfhound is a large dog breed, they need exercise throughout their lives. Because they have a naturally strong instinct to hunt prey, they should only be allowed on areas that are securely fenced. Also, any walks must be taken on a leash. Regular exercise such as one-hour long walks and play sessions are necessary for proper development. They can also participate in canine sports like tracking, agility, and lure coursing.

Irish Wolfhound puppies take 18 months or more to mature. Because of their active nature, they can be destructive and possibly injure themselves when left alone without proper guidance. Early socialization and puppy training classes with positive reinforcing techniques are recommended. Since they are intelligent by nature, wolfhounds are fast learners.
They love the company of people, making them an excellent candidate for therapy work. They are easy to train. They respond well to firm, but gentle and consistent leadership. 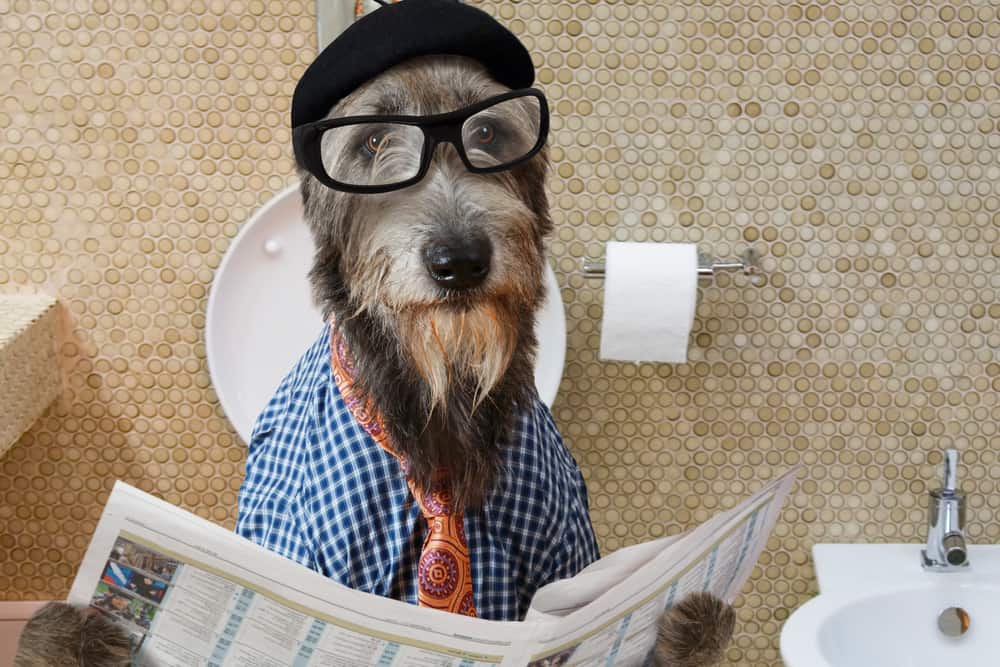 Despite its huge size, most Irish Wolfhounds are fond and gentle with children. They would rather protect individuals than the house or their best friend’s possessions. With its sweet temperament, an Irish Wolfhound makes a great family pet.

With other animals around, Irish Wolfhounds would love to chase, tackle, and pounce on anything that moves quickly. They are usually good with them, but some are more aggressive and dominant. Don’t forget that these were the hounds that hunted wolves.
When protection is required, this dog never lacks. Once they perceive danger, they are ready to protect you at all costs. 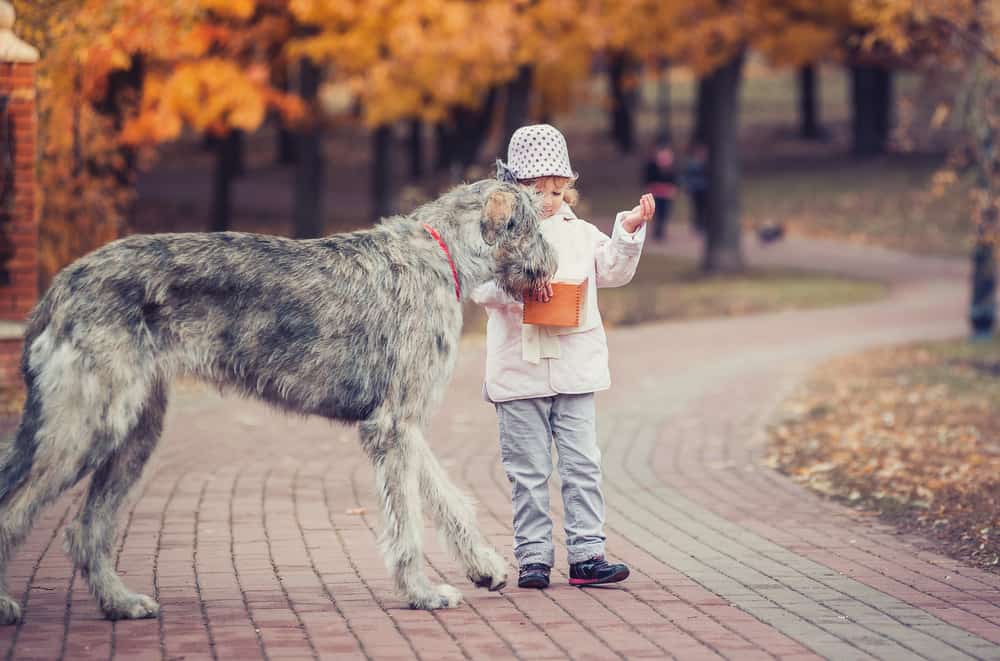 Irish Wolfhounds are best-suited in rural life – a suburban or country home with the wide-area where they can freely run, provided that the area is securely fenced. That being said, they are not recommended for apartment living. They do best in a home with a large fenced area to provide the kind of environment in which they can thrive.

Despite their size to deter intruders, Irish Wolfhounds are not ideal guard or watchdog. They are very accepting of strangers and don’t bark on alarm. They are brave, but not aggressive. 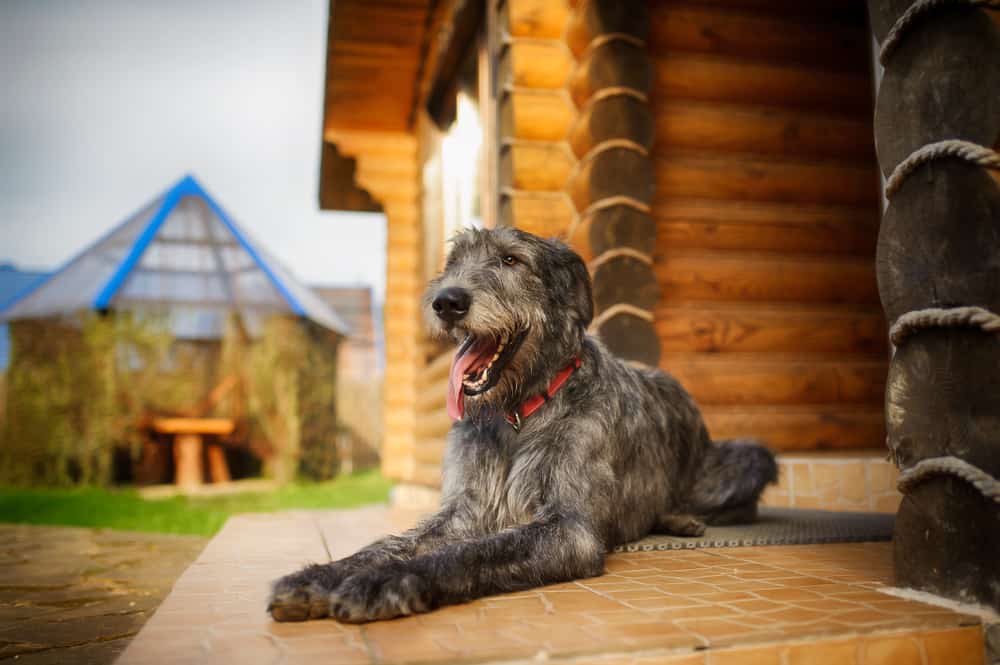 Irish Wolfhounds are very devoted to their owners and want to be in their presence at all times. Once they create a strong bond with their family, they can suffer from separation anxiety and become quite destructive if left alone for long periods of time.

However independent this dog is, they can become attached to both their owners, family, and other dogs they are raised with, making them not the most adaptable of dog breeds. 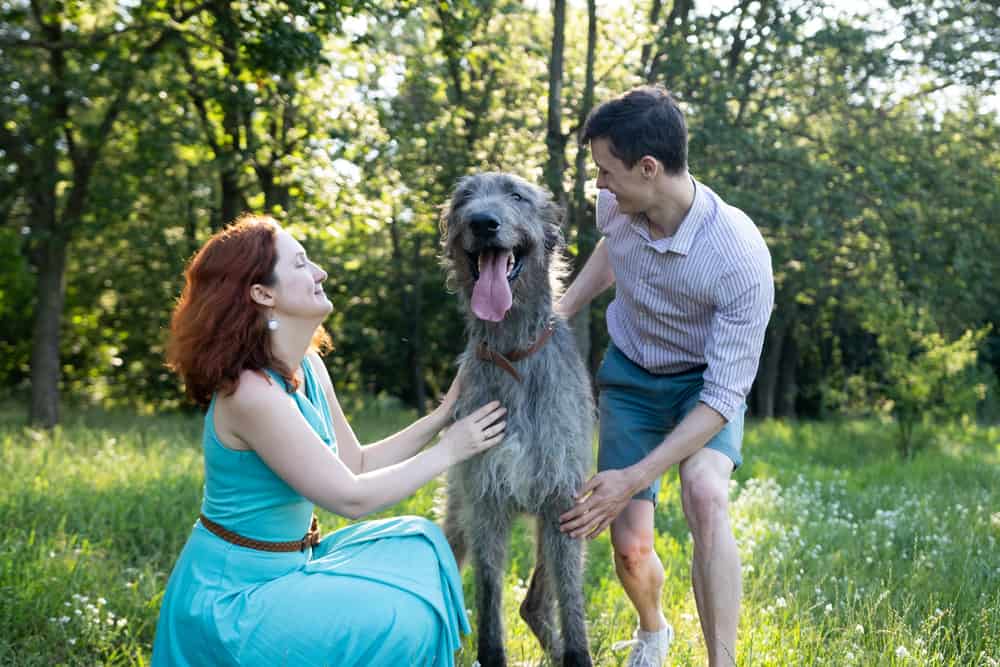 As mentioned earlier, Irish Wolfhounds, just like the other large dog breeds, have a relatively short life span. The leading cause of death is dilated cardiomyopathy and bone cancer. Like all deep-chested dogs, gastric torsion (bloat) is common. Owners should educate themselves about their symptoms and the necessary actions to take once it occurs. According to studies, neutering is associated with a higher risk of bone cancer in various breeds. One study suggested that castration of make Irish Wolfhounds should be avoided at least until the dog is completely an adult, or is fully grown.