Are you curious to know which dog dates back to Ancient Egypt? The so-called “African Barkless dog.” A dog full of life with a lot of potentials to be mischievous.

Let’s get to know about this friendly dog who has a lot of potentials to be a master escape artist.

The Basenji was born in Africa and is originally found in the Congo. This dog’s origins date back to Ancient Egypt, where traits of the Basenji can be found carved in stone on the tombs of the pharaohs. The dog was then further developed in Central Africa as a highly-skilled hunter dog. Where it used to hunt down and control village rodent populations. And so, it became known as the Congo dog.

The word Basenji actually means “Village Dog” in the languages of the Congo. Basenjis then were brought to Europe and the United States back in the early-to-mid 20th century. It was in Europe and in the U.S. where the Basenji was further developed once more and refined.

Today, the Basenji remains a skilled hunter and worker, with an affectionate and loyal demeanor. This dog is different from other modern dogs, in the form that the females only go into heat once per year, between the months of August and November. The Basenji was later recognized by the American Kennel Club (also known as AKC) in 1943.

The Basenji is nothing short of dull, or rough. With an elegant, and graceful appearance. The Basenji is smooth with coat variations in short chestnut red, black, brindle, or tricolor (black and red). These graceful dogs have white feet, with chest and tail tips, and some have white legs. The Basenji is also small, short-haired, and back, with a light build. This dog is high on the leg compared to its length. With a wrinkled head that is proudly carried on a well-arched neck. They have high and curled tails, and are poised and alerted dogs with balanced structure and smooth musculature. Which allows them to move with ease. 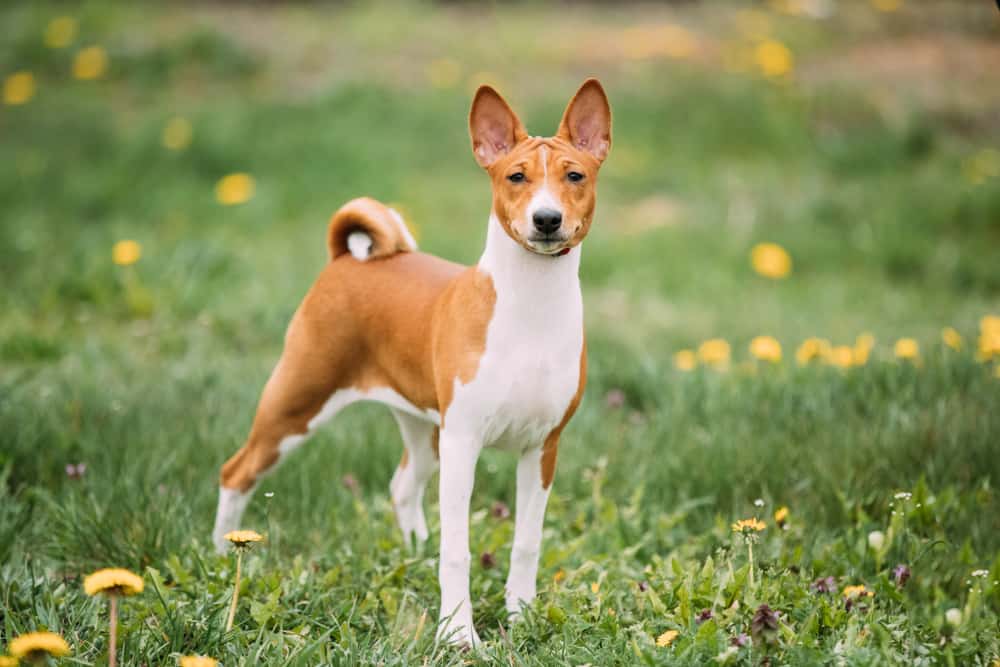 In terms of size, the Basenji male reaches up to 17 inches in height, while the females reach 16 inches. These dogs are not very large with the males weighing 24 pounds, and the females at 22 pounds. 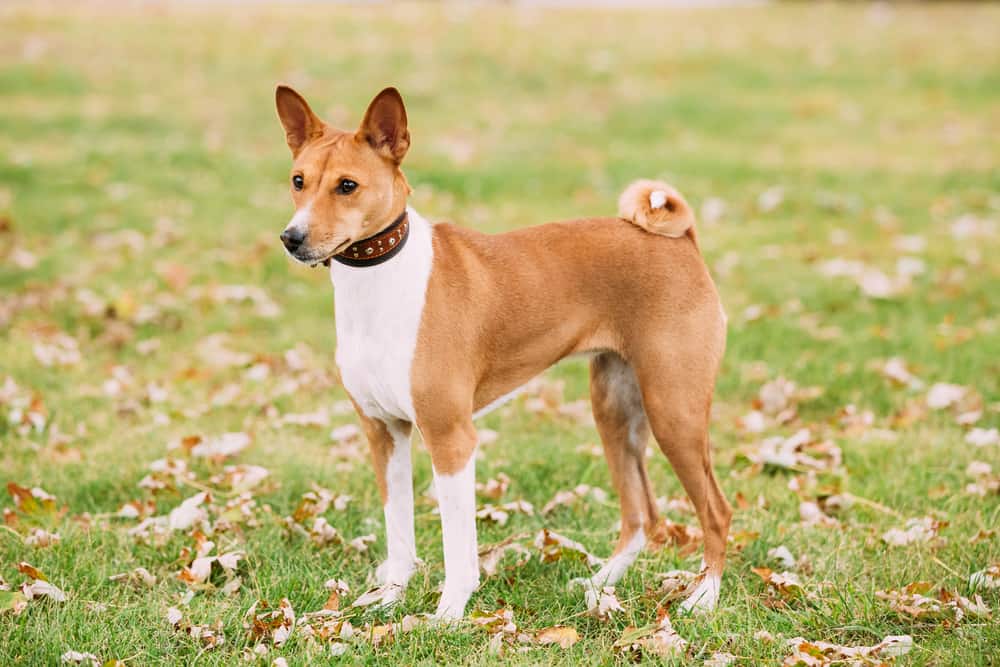 The life span of the Basenji is roughly 10 to 12 years.

While the Basenji is a dog, it has cat-like grooming habits. So it keeps itself very clean. Therefore, this dog shouldn’t require a bath more than once every few months. The Basenji sheds very little as well because their hair is so short and fine. Although, some Basenjis do have heavier undercoats and shed a lot. This is because of the variation in genetics and other factors. Like for example, the undercoat of the Basenji can be influenced by environmental factors, such as if the dog lives in areas with really cold winters. Or if the dog spends a lot of time outdoors. 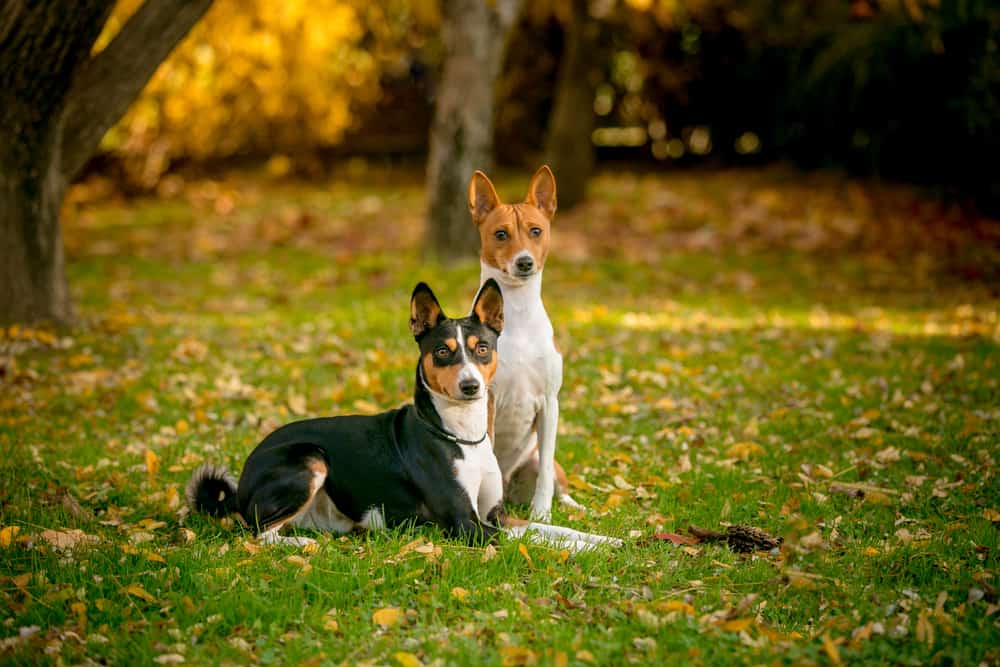 The Basenji is also known as the “African Barkless dog”. Because this dog is known to not bark. But they can be very noisy. Making sounds that include yodels, whines, and even screams. And Basenjis are known for being stubborn, so they can end up confused and aggressive. If you try to get them to overcome their stubbornness with force. 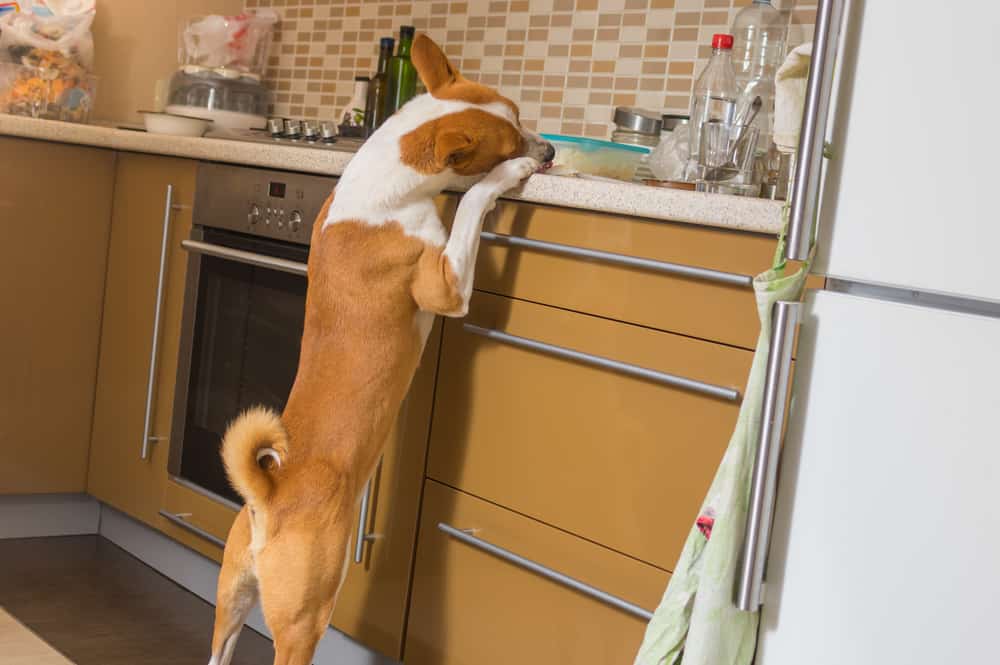 Besides their stubborn mule streak, the Basenji is highly intelligent. The famous phrase “willing to please” known to other dog breeds is unknown to him. The Basenji may think first then obey, or he may decide there is no good reason to do as you ask. This dog will use its intellect to demand your attention. And to get you to provide whatever they want or need. 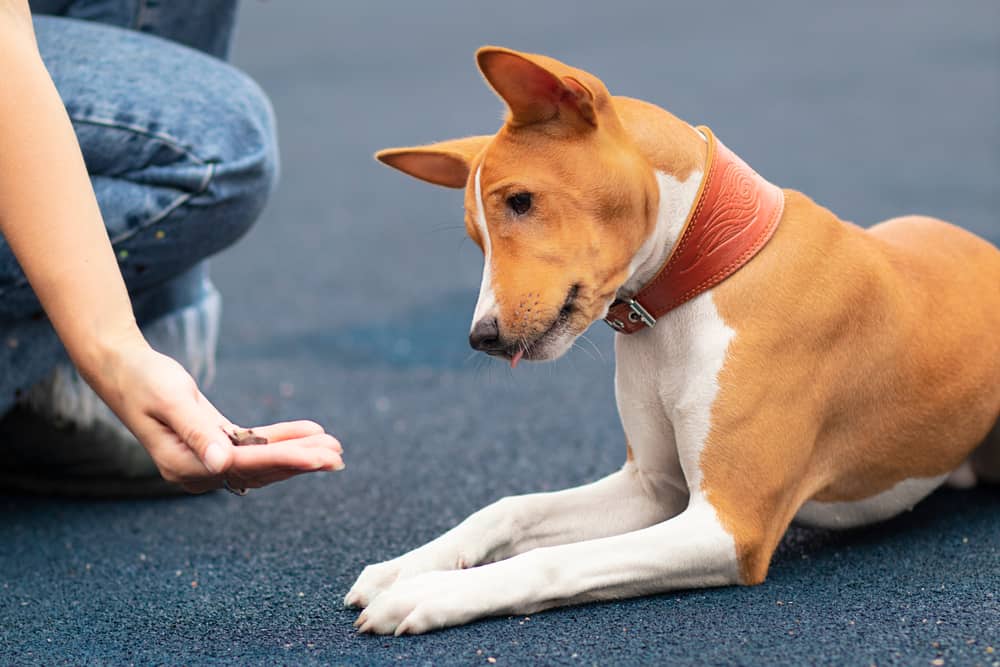 The Basenji’s balanced structure and smooth musculature allow the breed to move with ease and agility. So it’s no surprise they tend to excel in agility competitions. 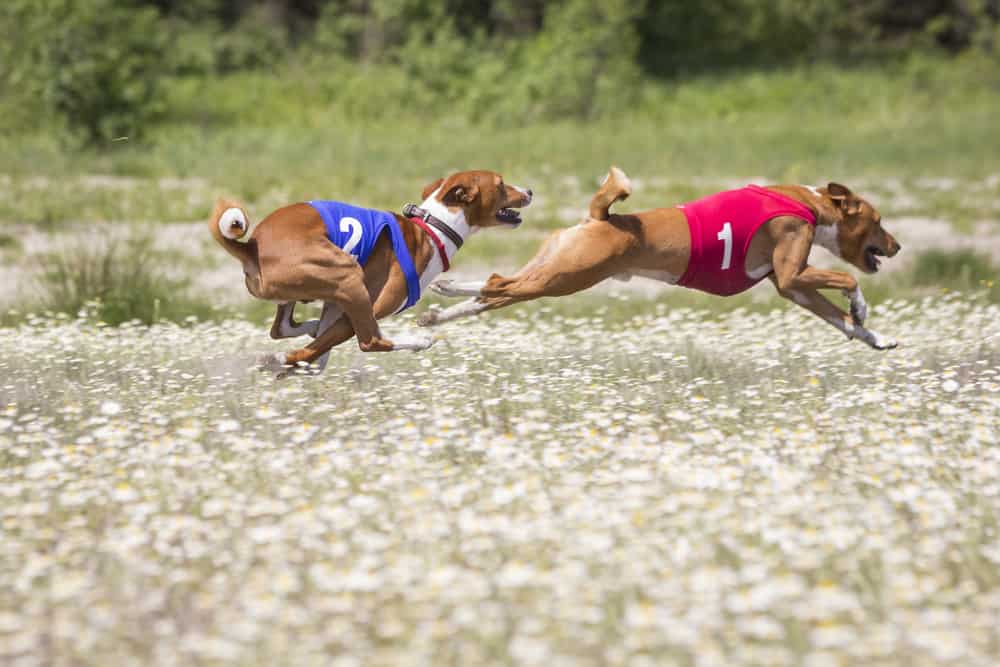 Along with agility, the Basenji is very energetic, inquisitive, and very active. These dogs do require a lot of daily exercises to keep them from getting bored. Because a bored Basenji is a destructive Basenji. And you don’t want to return home to a bunch of destroyed decor now do you?

Long play sessions in a well-fenced yard or securely on lead is a must. Since the Basenji is a hunter by nature, you should never let them run loose. Or their instinct to hunt might take over. Urging them to run off chasing some other animal. The best thing you can do for a Basenji is to give them a structured outlet to use all that built up energy. Like enrolling them in canine sports, where they tend to excel at lure coursing, tracking, and obedience competitions. 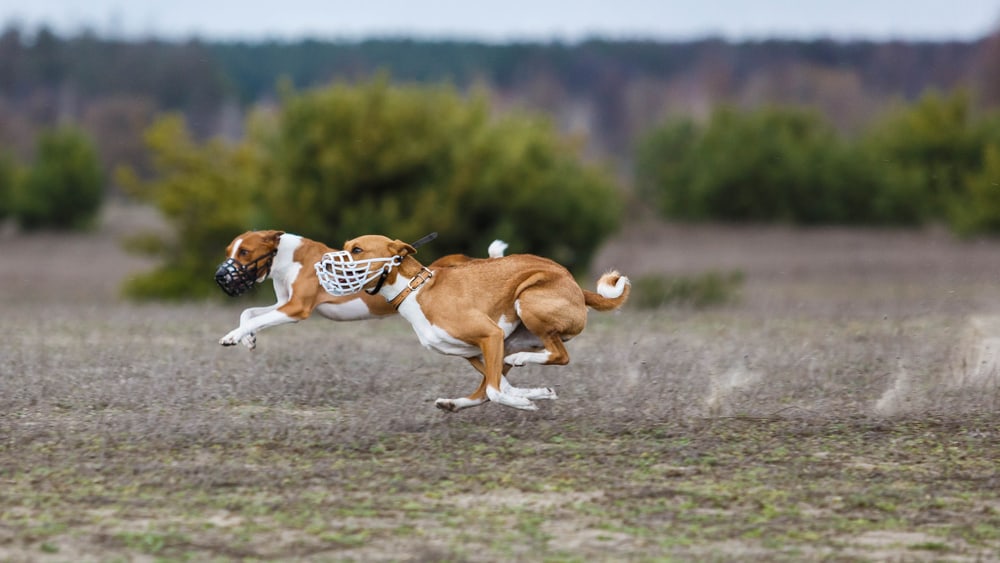 The Basenji also needs to use their energy in the right manner, so it is recommended you put them into early socialization and puppy training classes. This is due to their high energy levels, intelligence, and a strong habit to misbehave. Since this dog does act in a catlike manner it is not easy to train them.

But with the right atmosphere and some good encouragement, they are trainable, while using positive training techniques. And Basenjis do lose interest quickly, so it is crucial their training sessions last no longer than five to ten minutes. And careful their high intelligence makes this breed a wanderlust master escape artist. 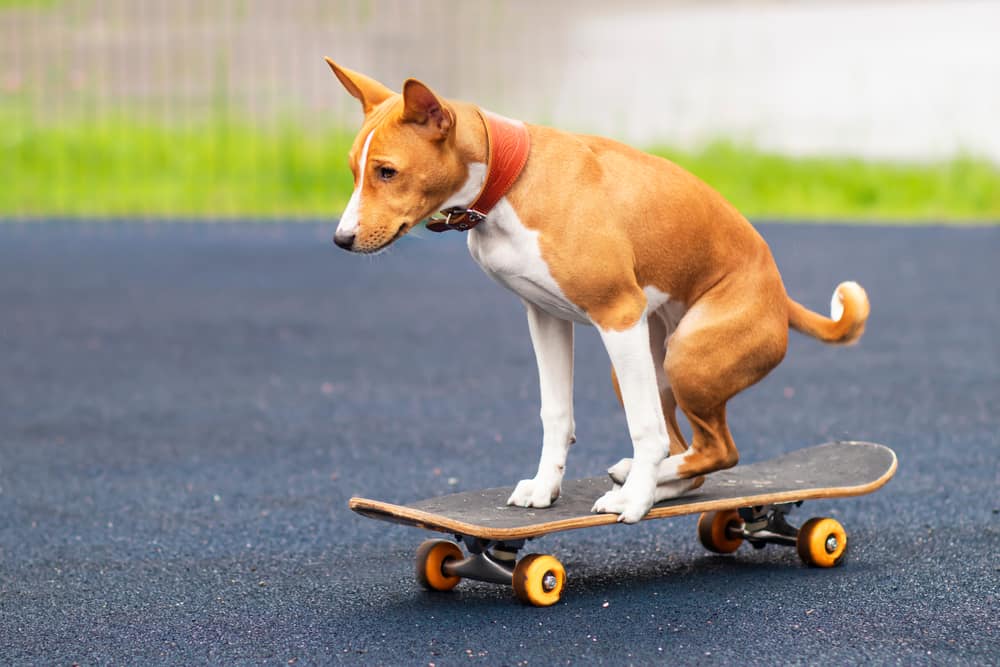 Aside from that though, Basenjis are very affectionate with family, kids, and strangers. They do get along with other dogs but can get argumentative at times. They are very fierce protectors of their families. And are very quiet and friendly toward their owners, strangers, and fellow dogs.

They make great companions for children since they interact and play lightly with them, and don’t see them as threats. But don’t leave a Basenji alone if you have other small animals like cats, birds, and rabbits. Or their hunter instinct might make them commit undesirable acts. 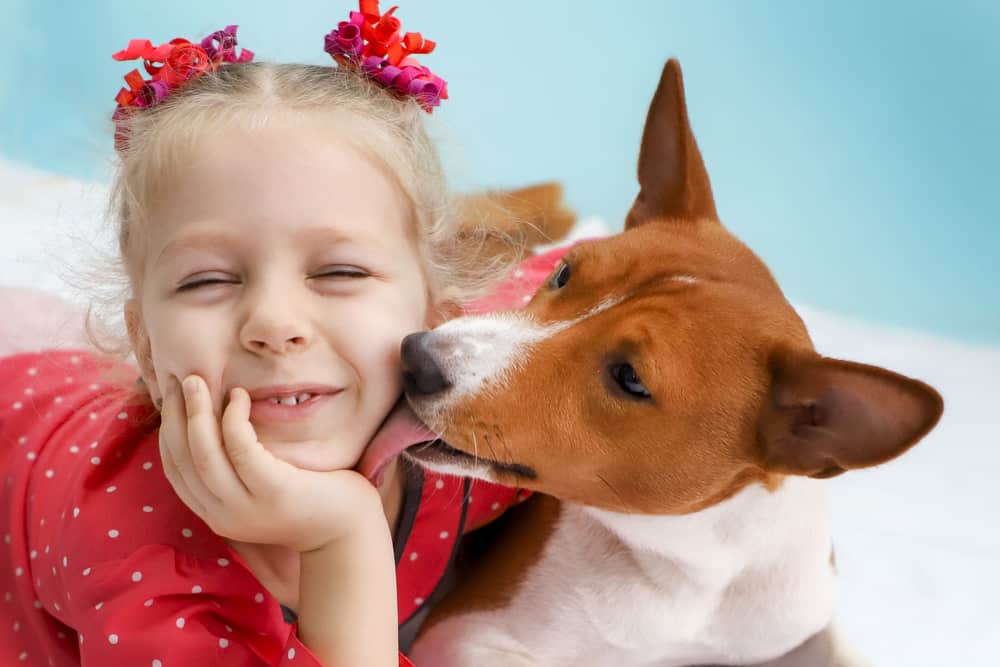 Because of their small stature, the Basenji is a great pet for apartment living. They hardly shed, rarely grow taller than 18 inches, and are the only dog that doesn’t bark. So, they are great for living in small apartments. But do keep in mind, due to their bountiful energy, and intelligence. These dogs require a lot of daily exercise and toys to keep them from getting bored.

So for this matter, they are best suited for more athletic owners. Yet, their high-spirited nature and playfulness make the Basenji a great loving and protector of their family. But this dog does require a lot of effort and dedication since they are quite stubborn. So they are best suited for calm, and firm owners who will be consistent, but firm with the house rules. 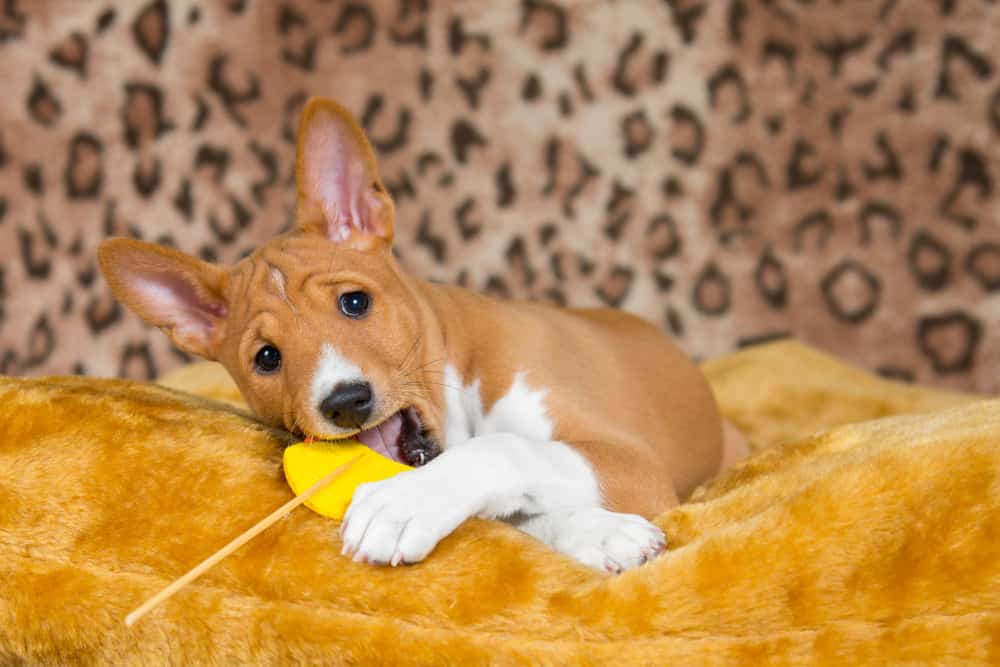 The Basenji can get mischievous if you allow them to get bored. And they don’t tend to get separation anxiety. Because these dogs can be left alone for several days if necessary due to their high intelligence. 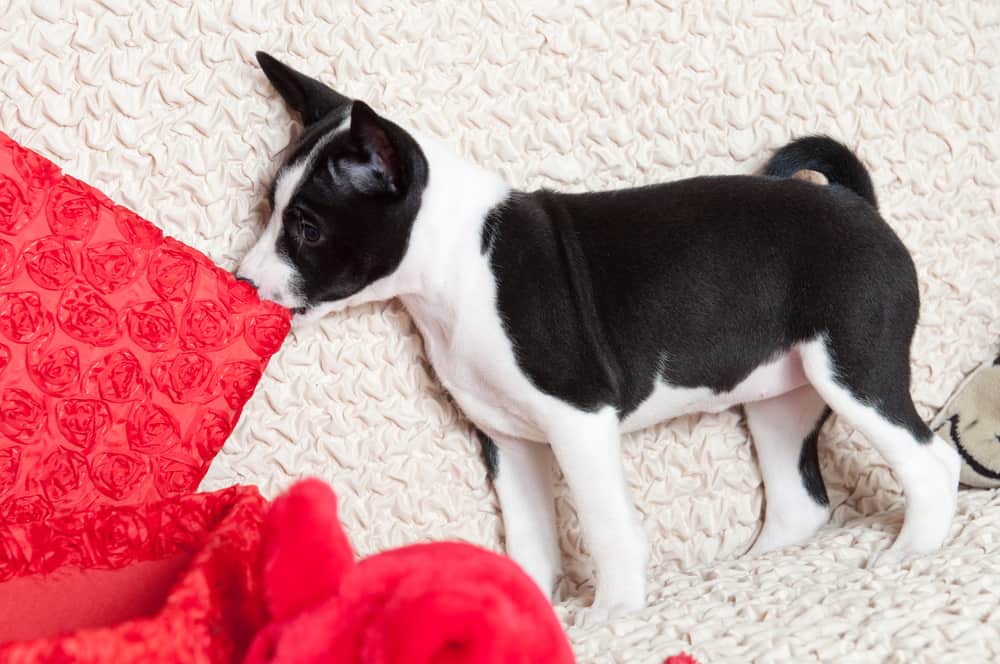 When it comes to health issues the Basenji can suffer from different forms of diseases. Although, Basenjis are generally healthy dogs. They can suffer from eye diseases that are especially persistent in the pupil membrane area. Which can severely impair the vision of this breed. Like optic nerve coloboma, progressive retinal atrophy (PRA), cataracts corneal dystrophy, and retinal dysplasia.

Basenjis are also affected by a severe form of colitis that occurs in Basenjis similar to irritable bowel syndrome in people. Fanconi is also another serious common kidney disease that can be inherited in Basenjis. And hypothyroidism is also a very common disease to this breed, according to the Michigan State University thyroid database up to 17% of Basenjis have low thyroid levels. And some lines of Basenjis can also inherit hernias. And they can suffer from orthopedic diseases such as hip dysplasia, elbow dysplasia, and luxating patella, but these are not common in Basenjis.