Do not be deceived by its name. This breed is not made in Australia. The Australian Shepherd, also known as “Aussie” is developed in the Western United States and is usually seen alongside cowboys.

If you prefer an active, energetic dog, then Aussie is the one! This dog is happiest when given a job to do which keeps him busy all day. He is a smart, affectionate, and a wonderful family companion.

The Australian Shepherd is a European breed developed in the United States by way of Australia during the time of the Gold Rush in the 1840s. Although there are many theories on which breeds were used to develop this dog, one thing is for sure – they were bred to herd livestock.

One theory states that during the 1840s, this breed’s predecessor includes Collie and Shepherd-type dogs that were imported with shipments of sheep from Australia – hence its name.

With a renewed interest in Western-style horseback riding during the post World War II years, this breed has become extremely popular. They are usually seen as hardworking dogs alongside cowboys. In 1993, the American Kennel Club finally recognized this breed.
Today, Aussies are still known to be a hardworking, protective, and lovable, herding dog.

The Aussie has either straight or wavy medium-length hair that covers its body. Its coat is water-resistant which makes this dog comfortable during rainy or cold seasons.
This breed comes in a variety of colors, including blue merle, red merle, red, tri-color, and black. Its eyes are either dark brown, yellow, blue, green, or amber which makes Aussies stand up from the other canine. 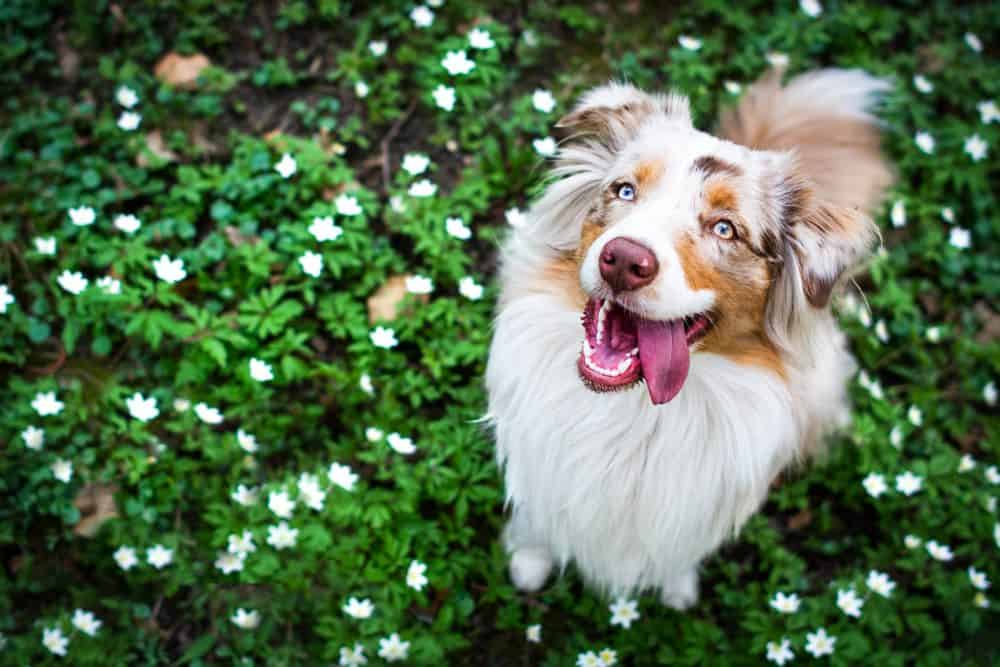 Generally, male Aussie stand at 20 to 23 inches tall at the shoulder with weights between 50 to 65 pounds. On the other hand, female Aussies stand between 18 to 21 inches tall at the shoulder, with weight varying from 40 to 55 pounds. Aussies are a bit longer than tall.
You may have read somewhere that Australian Shepherds have Teacup, Toy, or Miniature variety – they are not considered as true Australian Shepherds. This breed does not have smaller size varieties. 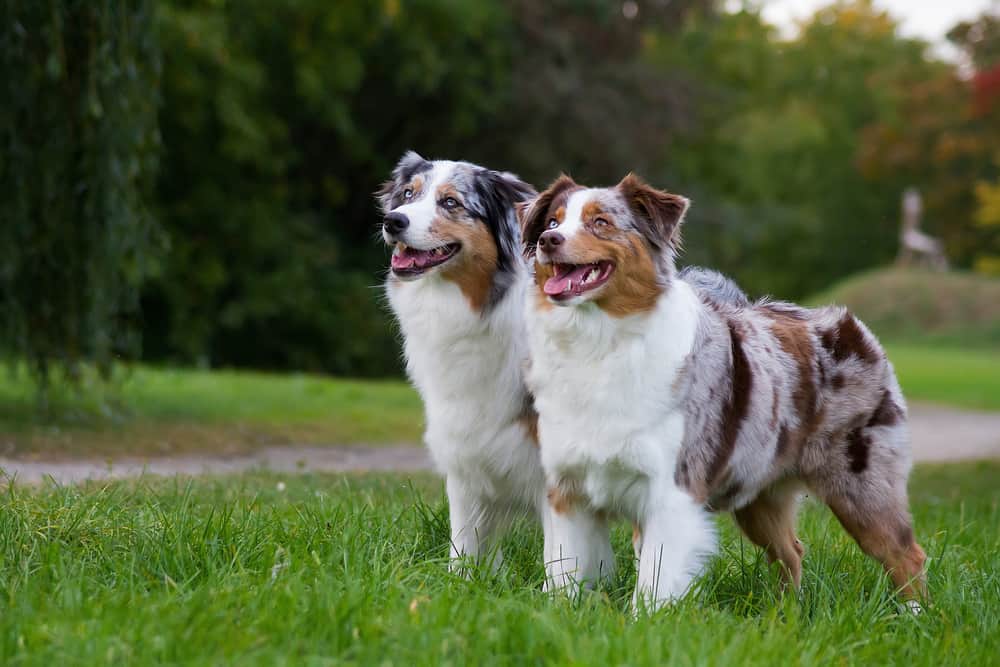 Australian Shepherds live between 11 to 13 years – an average life span for its size. However, various factors such as the amount of exercise and health greatly affect its life expectancy. To help your dog live longer, get him regular check-ups, and provide him with the right amount of exercise and diet he needs.

Because of their medium-length coats, Australian Shepherds are considered average shedders. They shed all year round but shed more during the spring season.

Regular maintenance such as weekly brushing is essential to keep their coats tidy, matt- and tangle-free.

If regular maintenance is followed, Aussies would need to be bathed only when necessary. 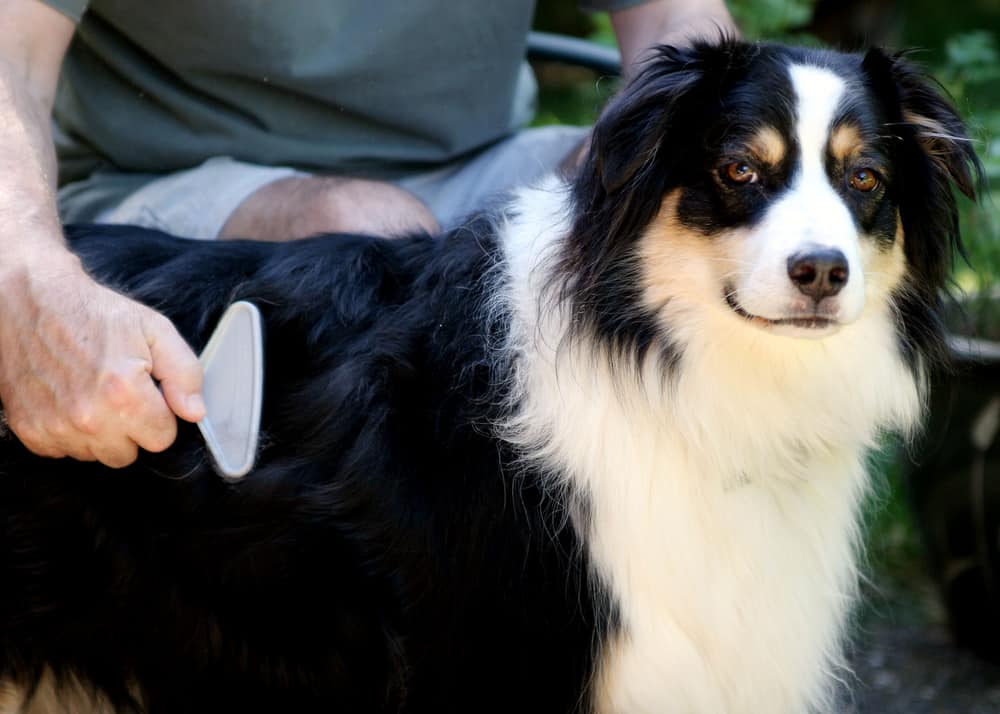 Originally bred as a shepherd dog, Australian Shepherd thrives in a home where he is kept busy. This dog is quick-witted, hardworking, and adaptable.

Since its job is to herd sheep, this dog can be dominant and may even rule your house, so it is important that he knows that you’re in-charge – that means consistent and firm leadership. If it is your first time owning a dog, then Aussies may not be the best choice.

Once considered a family, Aussies will be extremely loyal and devoted to you. However, it can also be unfriendly to strangers. Socialization at an early age will help this dog grow into a polite and courteous dog, so it is important that he is exposed to various sights, people, and situations during his puppyhood.

The Australian Shepherd is known for being a highly intelligent and dynamic herding dog. This breed is a fast learner, but it also means that he needs the right amount of mental stimulation in order to not be destructive at home. 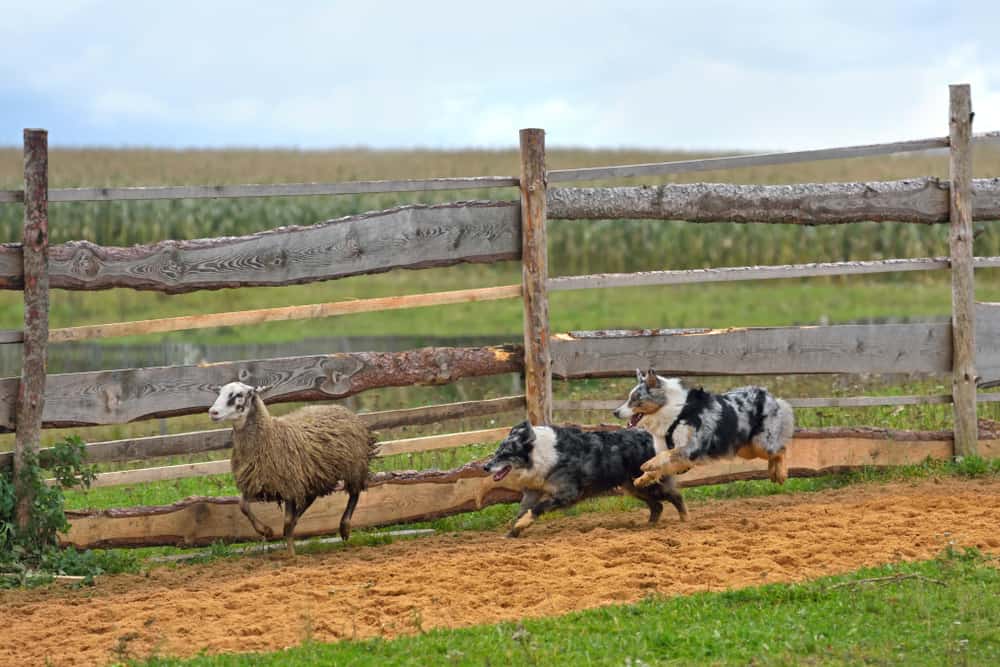 If you’re an owner that is interested in competitive dog sports, then get this breed! Aussies excel in canine sports such as obedience, agility, flyball, and herding tests. This breed is also commonly used as guide, hearing, assistance, police, and search and rescue dogs.

This natural-born leader can easily direct a flock of sheep with its sturdy built and intimidating eyes. 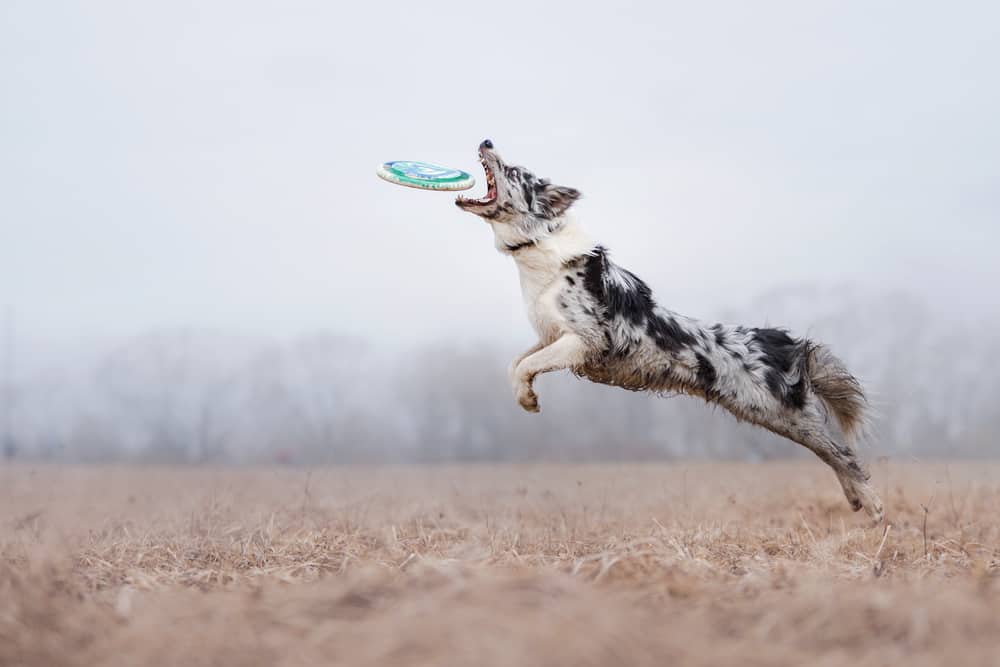 Because of its high-energy level, this breed needs plenty of exercises. A walk in the park won’t do the trick. He roughly needs a 30 to 60-minute vigorous activity, such as a game of fetch or Frisbee.

Aside from daily exercise, he also needs a job to do such as herding or engaging in canine sports. If an intelligent dog such as an Aussie gets bored, it will be disastrous. He may chew, bark for long periods, or just invent his own games to release its excess energy.

Aside from physical exercise, you also need to provide him with enough mental stimulation. You may need to buy him toys that will keep him busy while you’re out. 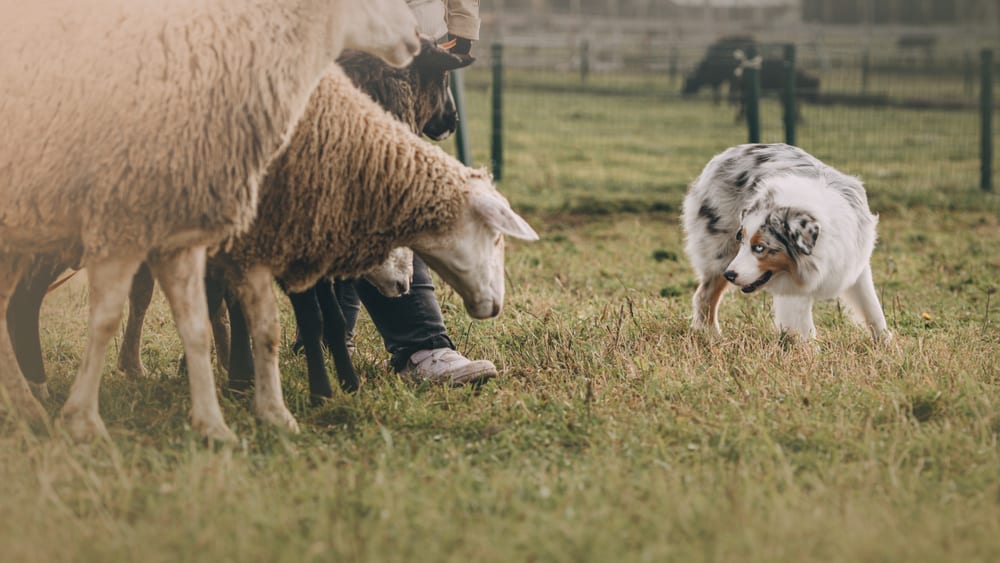 Their high intellect makes Aussies respond well to training sessions. They are relatively easy to train, especially when positive reinforcement strategies are used, such as food rewards, praises, and plays.

Since they are bred to work, they are happy just taking commands from their owner. In fact, they can also learn to help you with household chores, such as bringing an item to you!

However, this dog is not for the novice or timid owners. They tend to be dominant, so if you can’t handle them, they’ll eventually take over the house. They are best suited for the firm and experienced pet parents. They need to know who’s in-charge in order for them to do a good job. 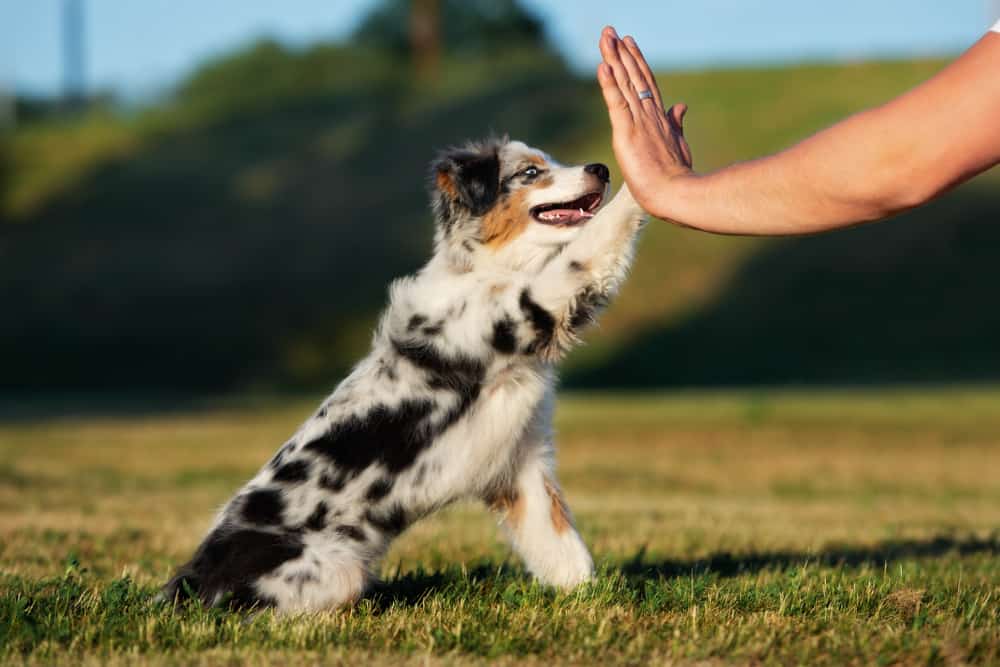 Born to be a herding dog, Aussies are extremely loyal companions. They are a good protector of your home and your family, but can also be distant and wary around strangers.

Because of their high energy level, this dog tends to play with you all day long. He is no couch potato. Although he gets along well with kids, he will mostly try to “herd” them as he considers children as part of his “flock,” so it is important to teach him how to properly treat kids instead of herding them.

If raised and trained properly, this active dog will show you his responsible and loving personality, making him a wonderful companion for your home. 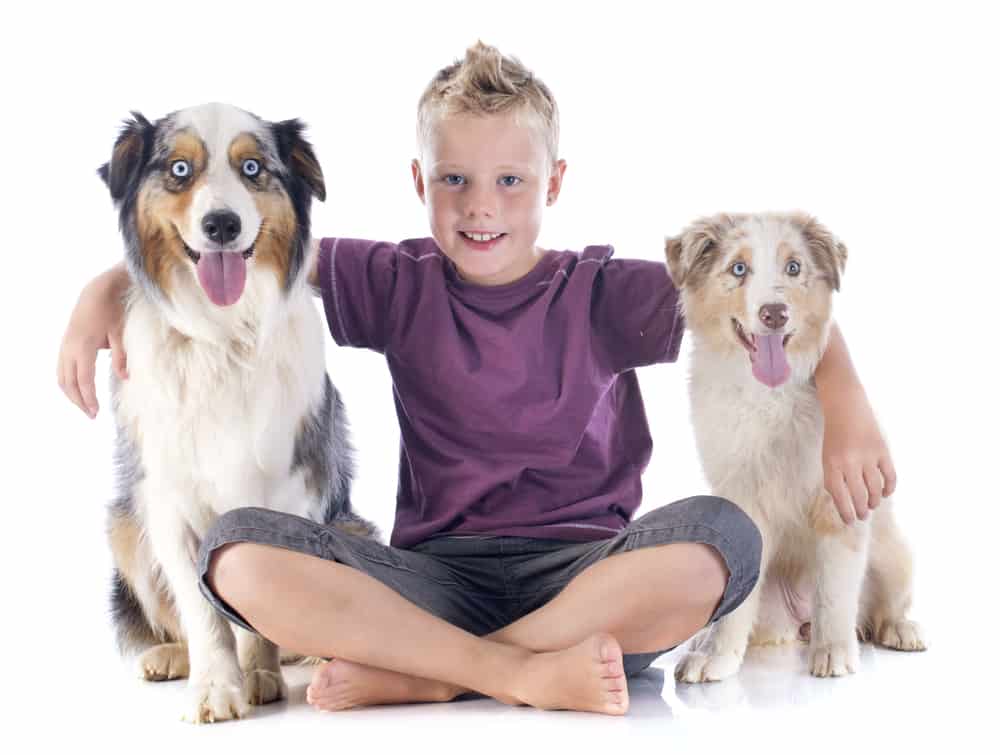 Because Aussies have high energy levels, they are not suited for apartments. Aussies thrive in a home with a fenced yard where they can freely run and release their energy, regardless if it’s in the countryside or city.

At home, this breed makes a good watchdog. It will warn you if it sees or hears something suspicious, and is ready to protect you at all cost in a dangerous situation. 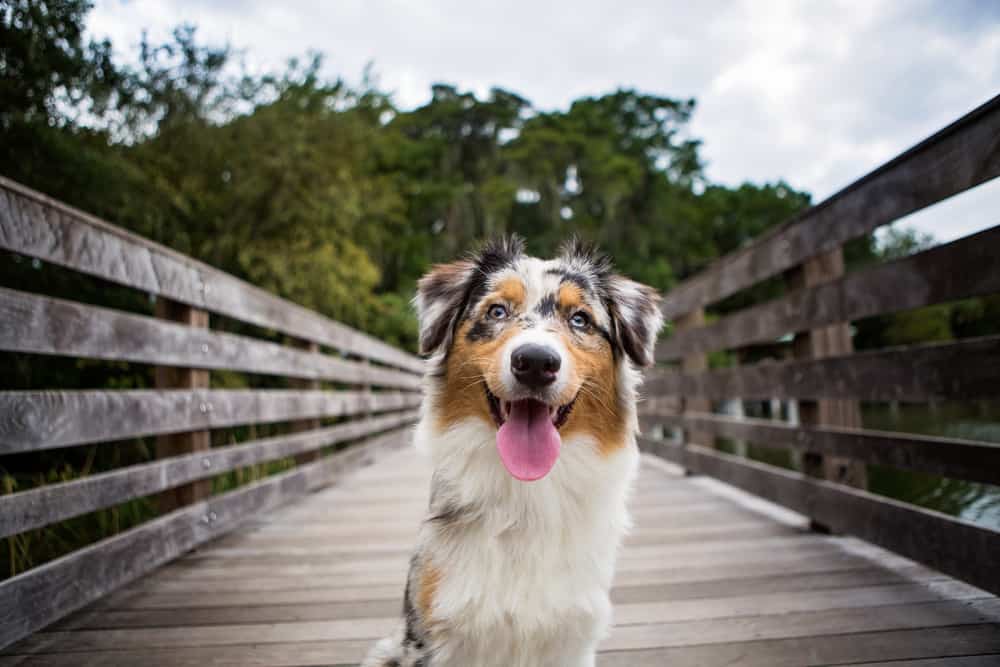 Aussies thrive around its family. If left alone for long periods, they may feel alone which leads to separation anxiety. So, it is important that you set a routine for your dog so that he knows you’re coming back. It is also important to give him plenty of toys he can play with while you’re busy with work. 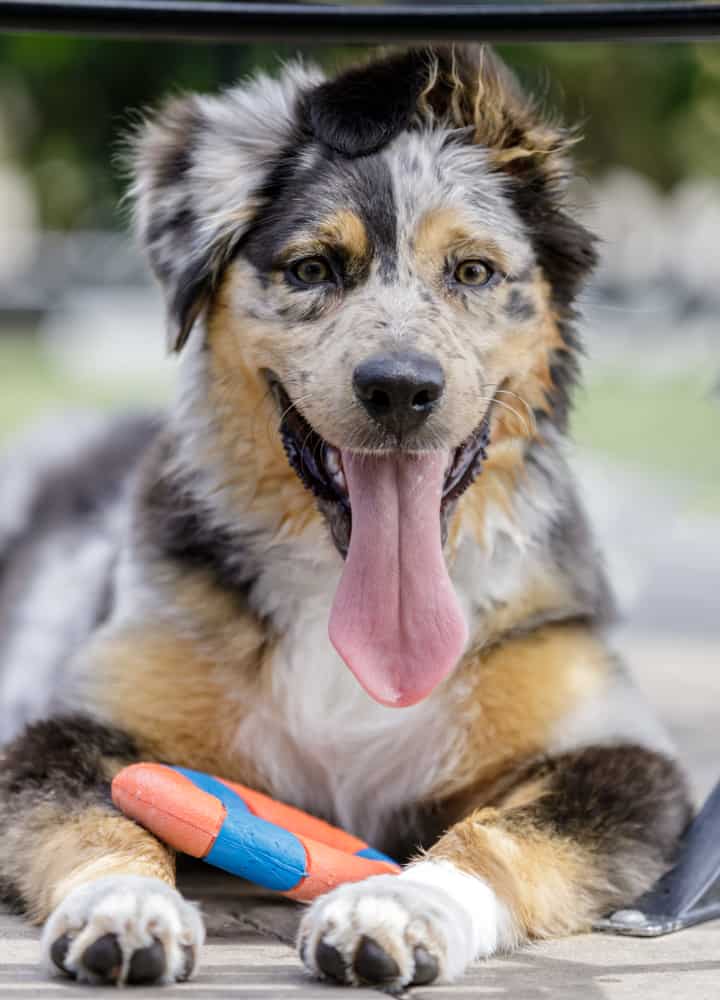 Generally, Australian Shepherds are considered healthy dogs. Although like every other dog, it may also suffer from ailments and health conditions, such as hip dysplasia, cataracts, and certain forms of cancer. Vision problems are also common.

This breed is the most common to acquire Epilepsy, so you may want to watch out for some signs if your dog has it.