Your expertise in handling dogs is an important factor when choosing one. Some are easy to handle, and some may need more patient and firm owners. Today, we will talk about the Boerboel – a gigantic protector for experienced owners.

The Boerboel, pronounced “boo-r-bull” gets its name from Dutch/Afrikaans words that roughly translate to “farmer’s dog”. This breed was also known as the South American Mastiff, South African Boerboel, Borbull, or Bole.

The Boerboel is a massive dog and incredibly muscular. It weighs as much as Great Danes, although it is significantly shorter in stature.

This breed is not easy to handle especially for novice owners. It is confident, territorial, and prone to pulling and chewing. It needs an assertive, experienced owner with plenty of space to exercise and run around.

The name Boerboel” came from Afrikaans/Dutch words “boer” which means farmer, and “boel” which means dog. Indeed, this breed was a farmer’s dog when it was bred by Dutch settlers in South Africa starting in the 1600s. This dog was used to defend the homestead from hyenas, lions, leopards, baboons, and other dangerous wildlife.

After the World Wars, breeding was not regulated, and Boerboel almost completely disappeared. In the 1980s, however, a group of breed enthusiasts started to breed pure Boerboels again. Due to their efforts, the Boerboel became known in South Africa and started to be exported around the world. However, the breed is still fairly rare outside South Africa.

It is uncertain which breeds make up the Boerboel’s ancestry, but one thing is for sure. Only the strongest dogs were able to survive the hot weather and encounter with wildlife, which contributed to the Boerboel’s tenacity and strength we know today.

Today, the Boerboel is known as an excellent watchdog, guardians, as well as competitors in canine competitions, and a family protector that adores children.

The Boerboel has a short, straight overcoat that is smooth and shiny, which covers its soft, dense undercoat.

It comes in a variety of colors including red, fawn, brown, brindle, or black. Some may have spots of white on their coat, especially around the neck, face, and paws, although it is considered a fault if more than 30 percent of the coat is white.

Usually, a Boerboel has dark markings around its eyes, mouths, and noses, and some have dark patches around its paws.

It has a broad and blocky head, powerful jaws, and thick muscles from neck to rump mark. This breed is a descendant of the ancient “molosser” dog family, the foundation of today’s Mastiff type breeds. 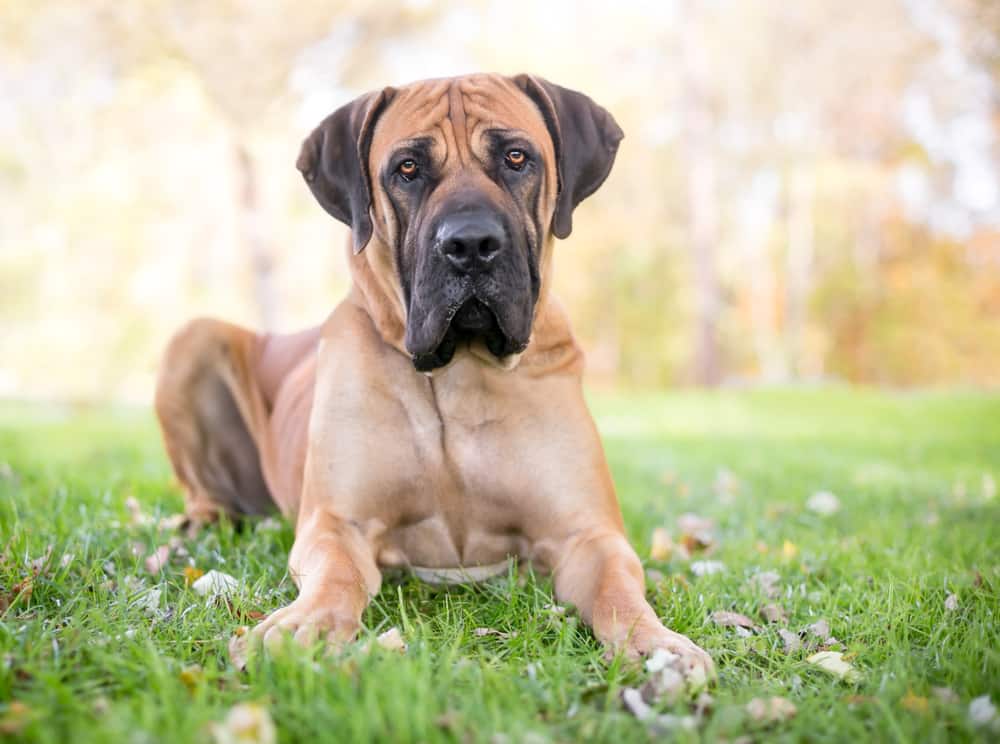 This breed typically weighs between 110 and 200 pounds, although some can be larger or smaller. 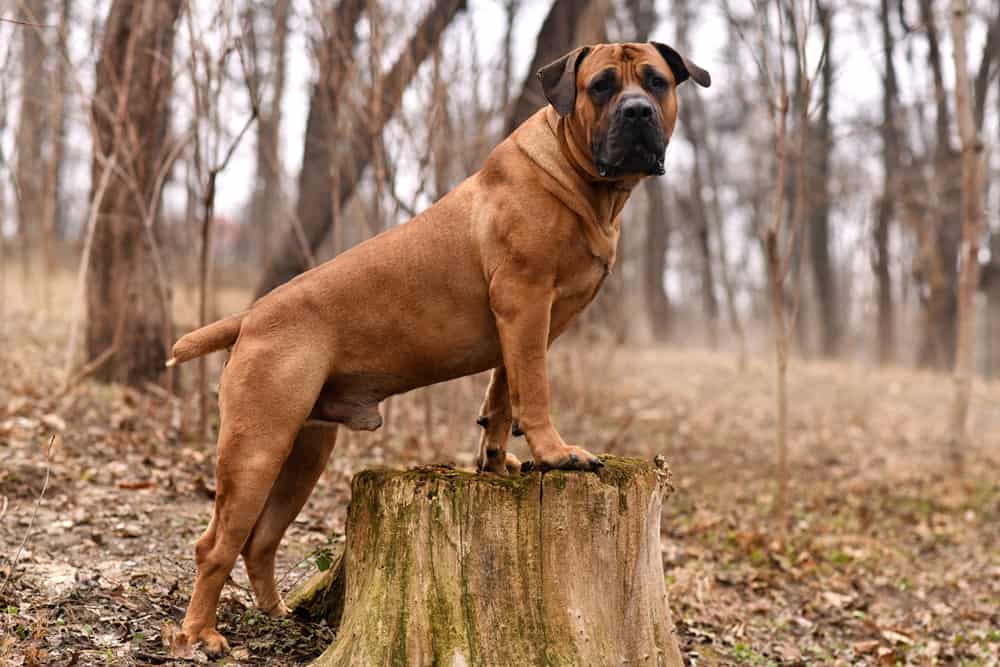 A healthy and well-maintained Boerboel dog can live between 9 to 13 years.
This breed has an average probability of having health issues in its lifetime, making it one of the more affordable breeds to insure.

The Boerboel has a short, dense coat that sheds an average amount. Weekly brushing will help in removing any loose hair and dirt that will keep the dog looking his best.

A good brushing also promotes new hair growth and distributes skin oils throughout the coat to help keep it shiny and healthy.

Monthly baths should be enough to keep the coat healthy. 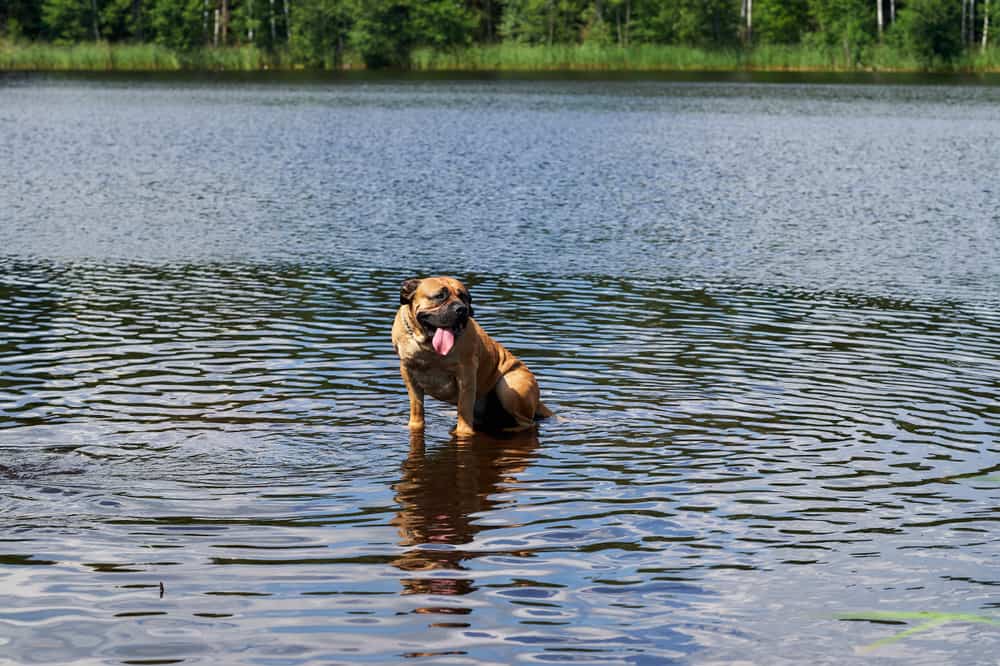 The Boerboel is playful, intelligent, and easy to please. It is happiest when given a job to do, may it be tough farm work, guard dog duty, or a competition where it can show off its agility and strength.

Although this breed makes it good watchdogs and protectors, the same instinct it possesses makes it fiercely territorial and aggressive if not trained properly. When having guests over, it is essential for a family member to introduce them to the resident Boerboel so the dog does not feel threatened. Usually, when the guest is someone it trusts, this dog is very welcoming, although it may still be on guard.

Early socialization is necessary for the Boerboel in order to not develop aggressive behaviors towards strangers. You may want to introduce it to lots of new people and pets during his puppyhood – the more strangers your dog meets, the better. 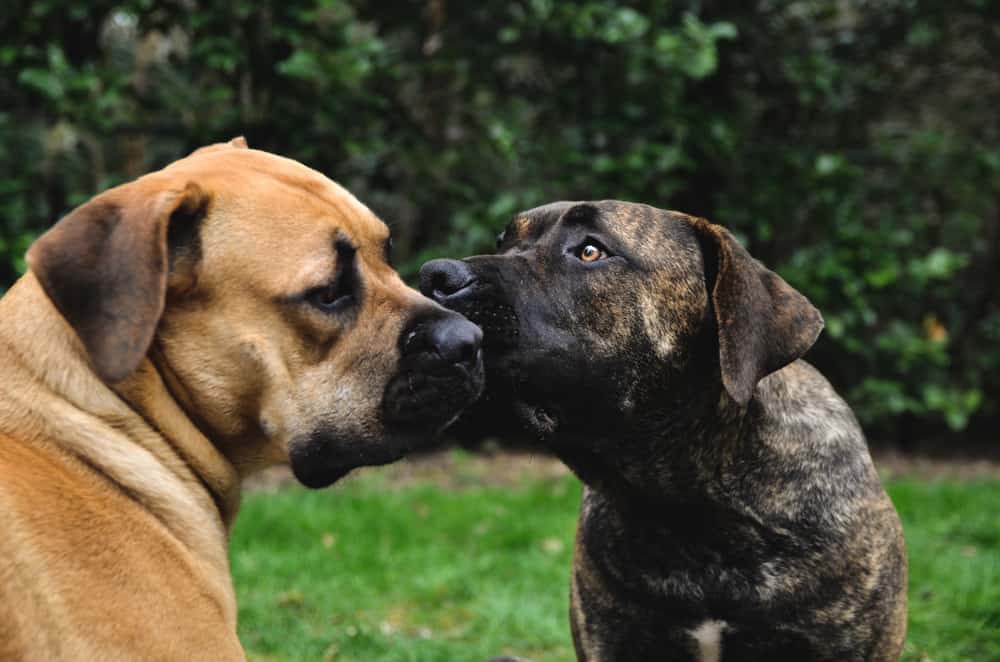 The Boerboel is an intelligent breed which makes it relatively easy to train compared to other breeds. 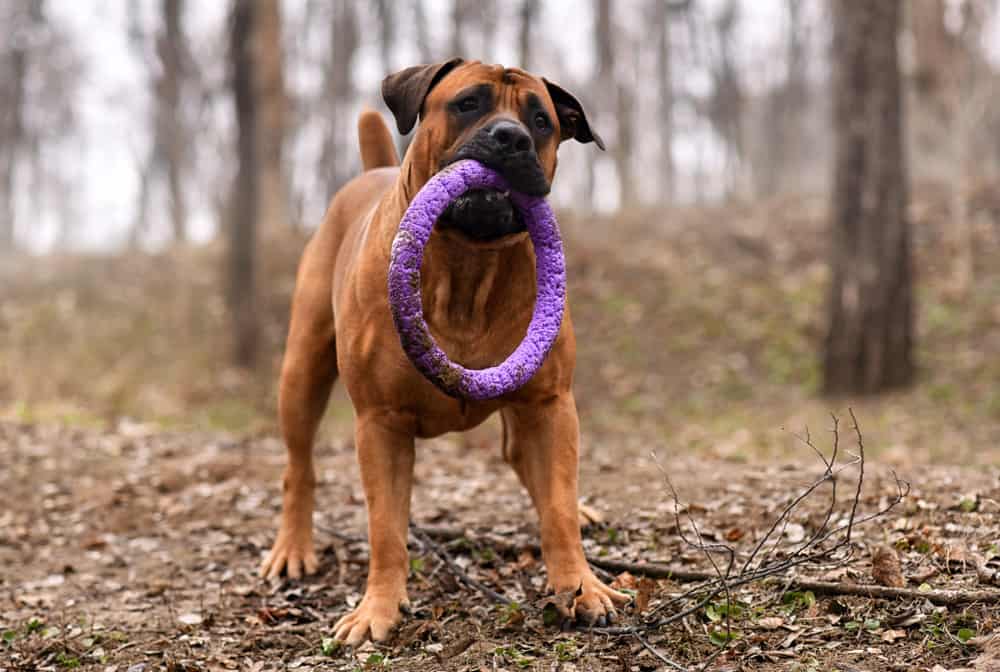 Having been considered as the most agile of all Mastiff type dogs, this breed is used for tracking, and has a tremendous prey instinct, and shows a great level of alertness while outdoors.

This breed is a dynamic and tough working dog and has a reputation for being able to adapt to ever-changing and unforgiving conditions. 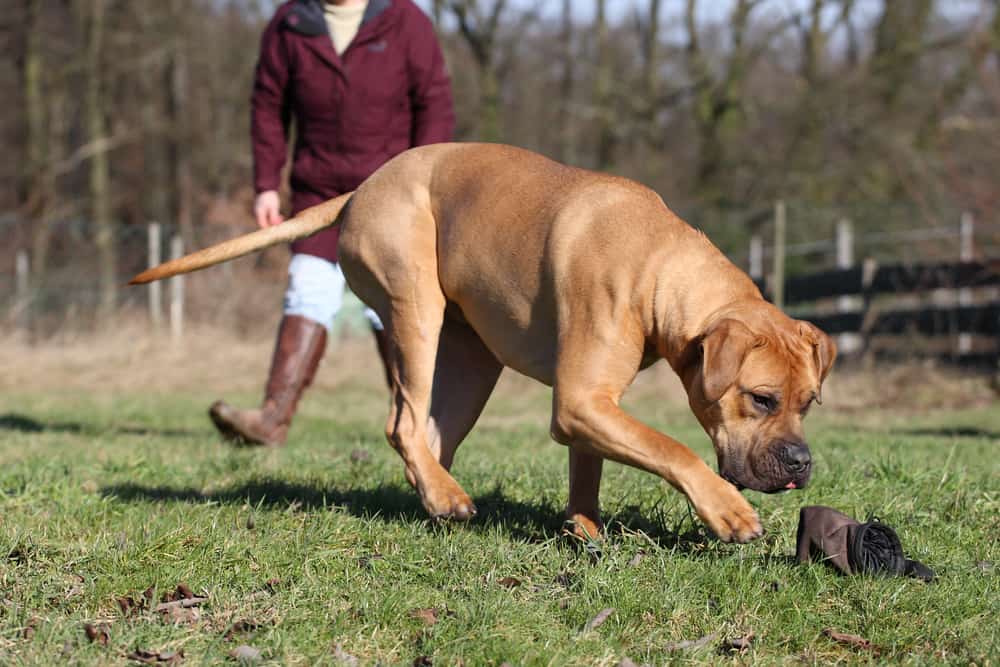 Being intelligent and surprisingly agile for its size, the Boerboel requires a high mind and body stimulation. Long walks on a leash, active play sessions in a securely fenced yard, and challenging devices like puzzle feeders can help this dog get the activities it needs.
Because of Boerboel’s protective instinct, it may not be too friendly to other dogs, which means that visiting dog parks is not recommended, especially when the dog lacked early socialization.

If not given the right amount of physical and mental stimulation it needs, this dog may develop destructive behavior. 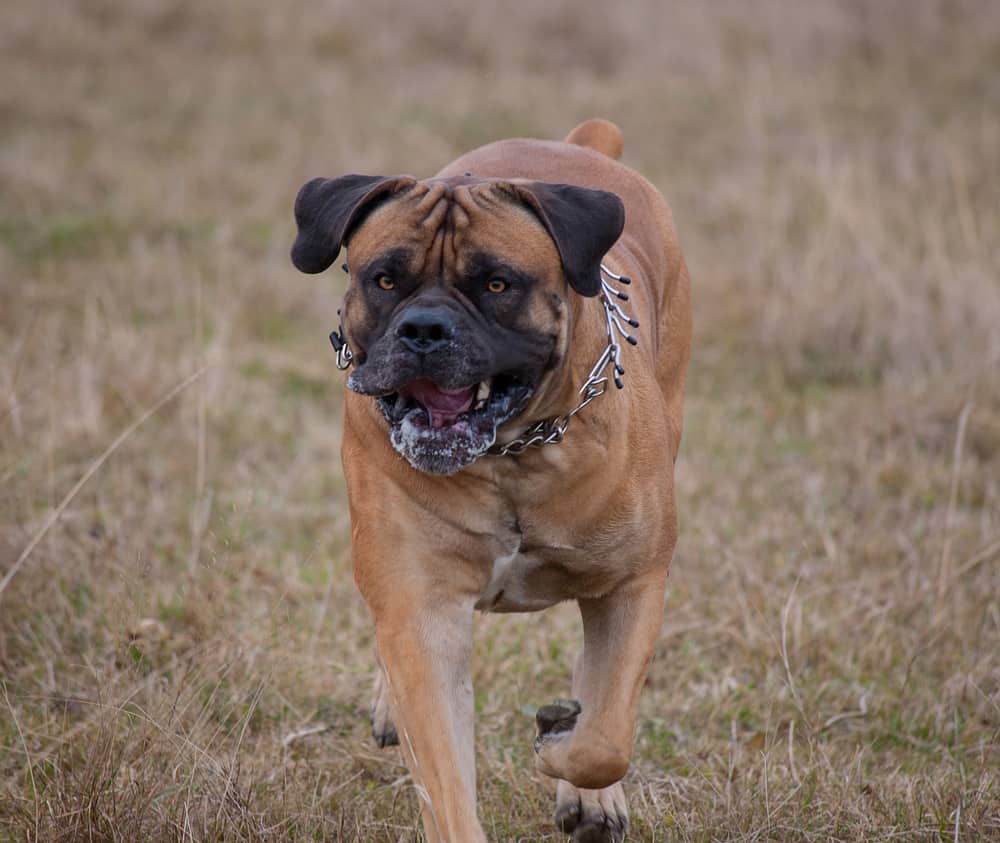 When it comes to training, the Boerboel can be quite dominant, which means an assertive trainer who will use positive reinforcement is essential to properly train this breed. That being said, the Boerboel is a poor choice for first-time or novice owners.

Patience and consistency should be accompanied by early socialization to prevent aggressive tendencies towards strangers and other dogs. Boerboel should have a dominant, consistent, and firm owner who can be strict when necessary and ensure the dog’s obedience.

Being relatively easy to train for experienced owners, this breed enjoys participating in obedience, rally, weight pull, and agility competitions, as well as protection sports and stock work. 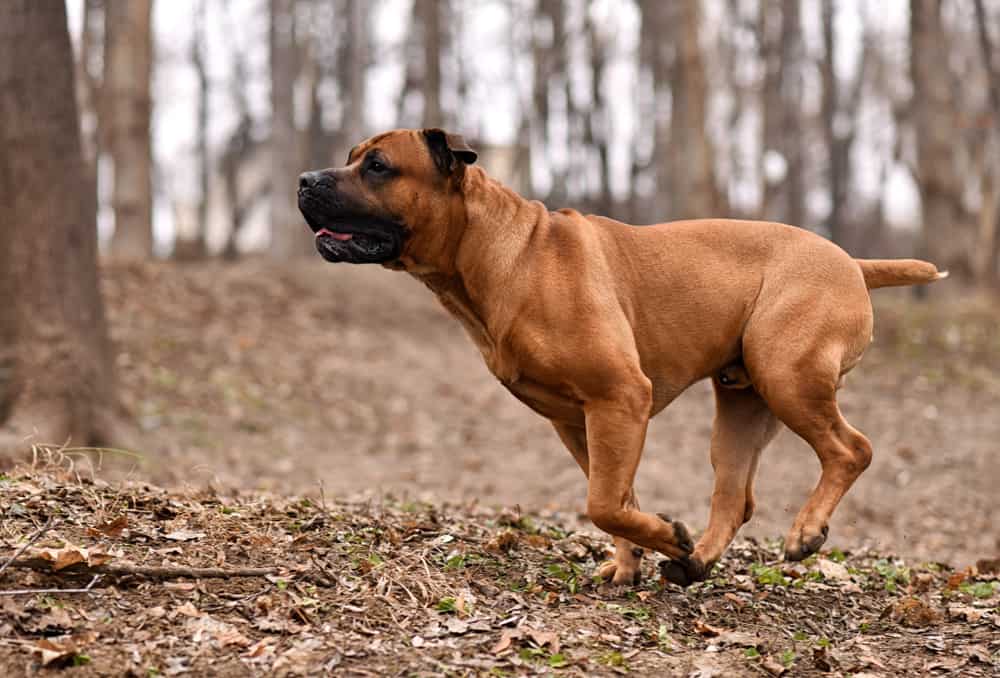 The Boerboel’s large size and intimidating appearance make it an excellent guard dog, scaring off possible intruders. However, this dog is equally known for being loving, calm, and family-friendly, especially towards children.

While this dog is not for novices and first-time owners, it will reward the right owner by being an affectionate family companion that will defend its home and human at all costs. With proper training, this dog can be an invaluable watchdog and affectionate pet for the whole family.

Boerboel loves children. That being said, it may accidentally knock over a child if it gets too playful, therefore the playtime should be supervised. Children should also learn how to play with dogs. No poking and prodding, no matter how trained and docile a Boerboel may be.

The Boerboel does well with animals that have been raised with and live in the same household, although this breed can be territorial with unfamiliar dogs. It is best suited to a home where it is the only dog.

Boerboels must be with its humans and will not thrive unless kept as an integral part of its human family. 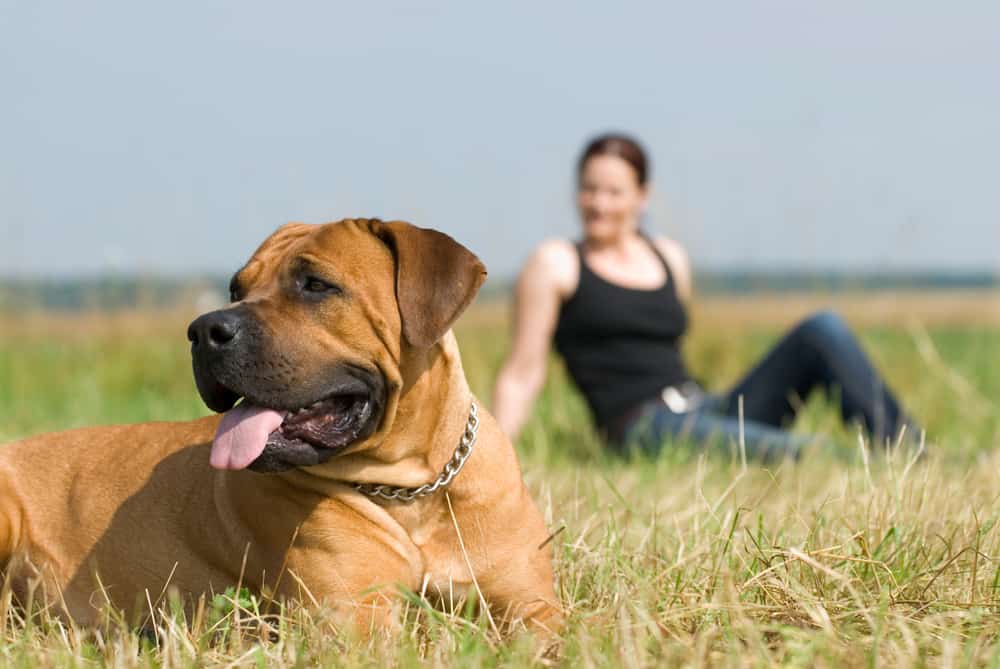 Being a large dog with high exercise demands, the Boerboel requires space, therefore an apartment is not an ideal environment to live in. This breed does best in a home with a securely fenced backyard that will give him plenty of space to run around and play. 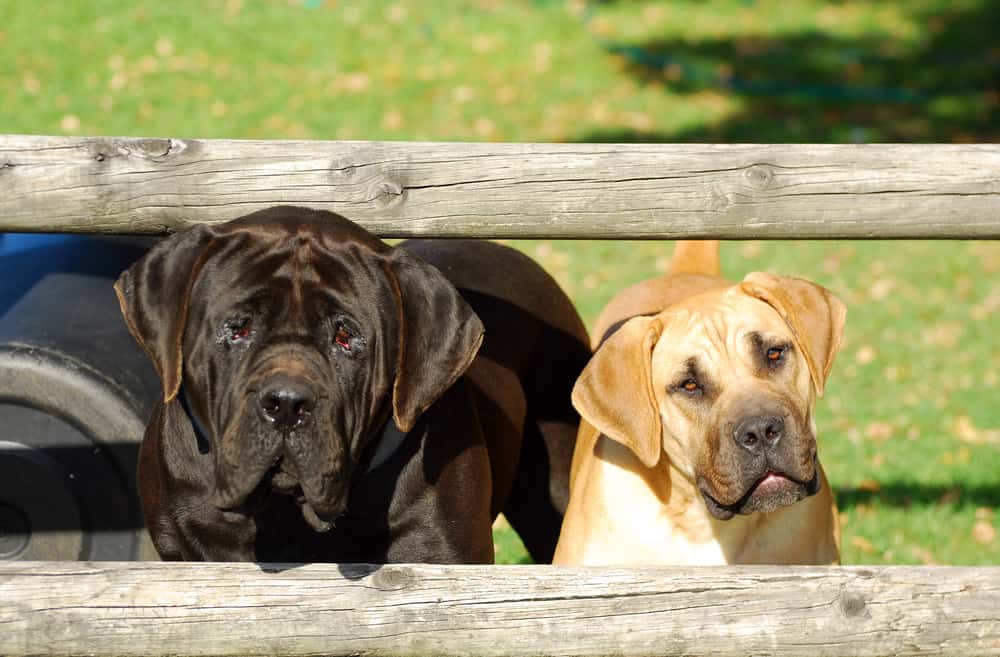 The Boerboel thrives around its human family. Leaving this dog alone for a long period of time may result in boredom, as well as separation anxiety. Further, this may lead to destructive behavior which you may want to avoid.

Generally, the Boerboel is considered to be a healthy breed with few known ailments that it may be predisposed to and may develop over the course of its life. This dog may suffer from hip or elbow dysplasia, heart disease, conditions that affect the eyelids, vaginal hyperplasia, and bloat.

In some cases, it may also suffer from juvenile epilepsy.