The Miniature Schnauzer has its all-in-one small package: smart, affectionate, funny, outgoing personality, and a heart that’s twice as big as its body. With a Miniature Schnauzer in the house, you’ll never be sad. It will make you laugh with its goofy antics, and will always be at your side wherever you are.

Miniature Schnauzers are merry little dogs that were first bred in Germany in the late 19th century. Unlike the rest of the group, this dog came from Germany instead of the British Isles. They are a family in the line with Affenpinschers and Standard Schnauzers.

In 1933, the Miniature Schnauzer was known as a separate breed from the Standard Schnauzer by the AKC. At one time, this breed got the third spot for being the most popular breed in America and still remains a favorite.

From its German name, the word “schnauzer” means beard. Throw in that walrus mustache and quivering enthusiasm, they will surely make you laugh every day.

Originally, Miniature Schnauzer is a farm dog that was bred to hunt and kill uninvited guests, which is the rats. However, the Miniature Schnauzer’s main mission in life nowadays is to bring companionship, joy, and positivity to the people who are fortunate enough to live with this cheerful dog.

Bred down from their larger cousins which are Standard Schnauzers, Miniature Schnauzers are stocky, robust little dogs standing from 12 to 14 inches with a bushy beard and eyebrows which give a charming, human-like expression.

But the beard is not just for a show! Sometimes, the thick facial hair was matted down into armor that protects its face from any potential retaliation from its prey.

Miniature schnauzers have a hard, wiry double coat that comes in three color patterns: salt and pepper, black and silver, and solid black. It naturally kept the debris off when they dug into the ground. However, they do not shed much so they work well for owners who have allergies.

This breed appears to be tough, muscular, and fearless without being aggressive as if they are perfectly created to be all-around farm dogs and ratters. 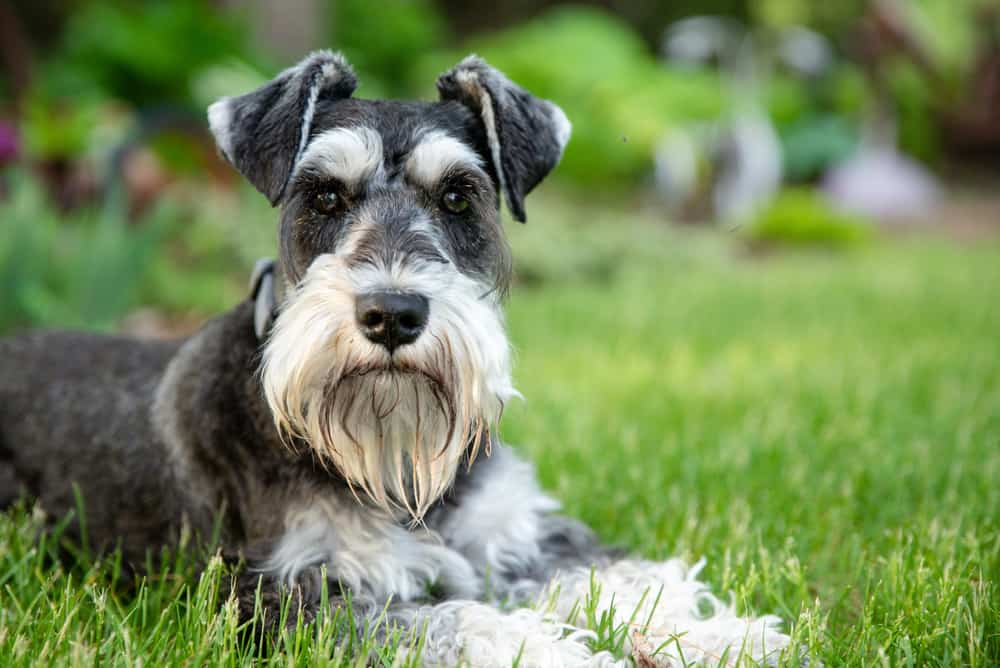 Even if Miniature Schnauzers are descended from the Standard Schnauzer, they are completely a different breed.

The Miniature Schnauzer is the smallest of the three Schnauzer breeds. The standard size of the male breed is 14 inches, while a female is 13 inches high at the shoulder. Its weight varies from dog to dog but it typically ranges from 4.5kg to 8.2kg. However, if your Miniature Schnauzer is over this weight, they are still considered as a small breed dog. 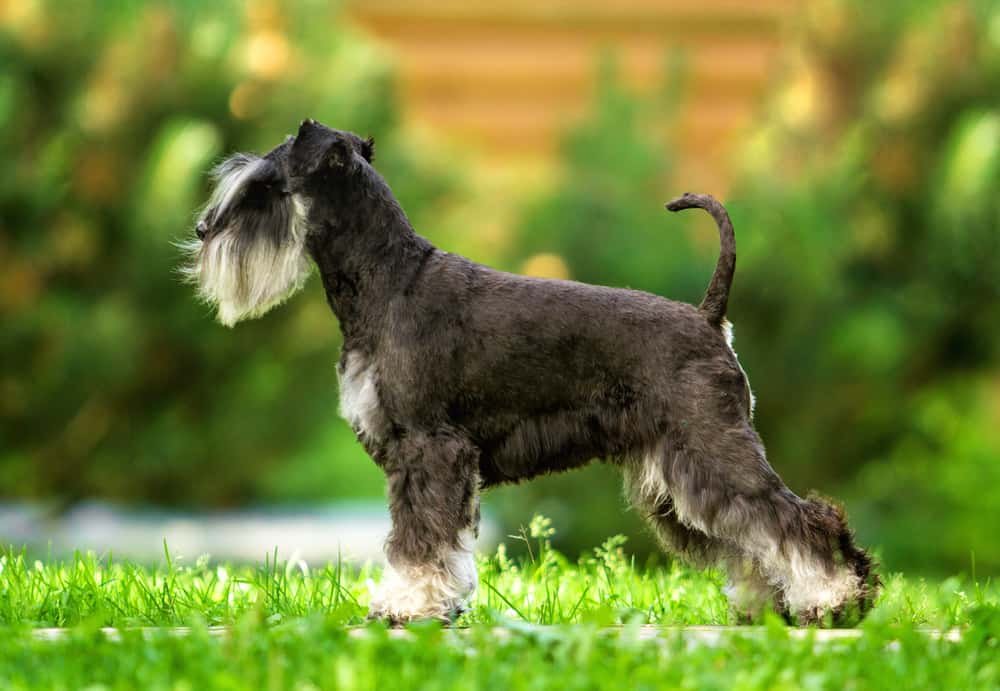 Miniature Schnauzers age gracefully; they do not show signs of age until late in life.
According to studies, purebred dogs live an average of 11 years but the Miniature Schnauzer lifespan is around 12 years on average. Despite that fact, years can be added for this dog by only breeding from the healthiest parents and providing a lifetime of good and proper care.

The Miniature Schnauzer has a double coat—a wiry topcoat, with a soft undercoat that requires frequent brushing, combing, and grooming to look its best. Nevertheless, the breed sheds very little.

Most owners of pets choose to have the coat trimmed with clippers done by a professional groomer.

However, this should be done every five to eight weeks for the dog to look his best. For the show ring, some of the dog’s coat is regularly “stripped” by hand.

The Miniature Schnauzer should get a bath once a month or so, depending on his surroundings. 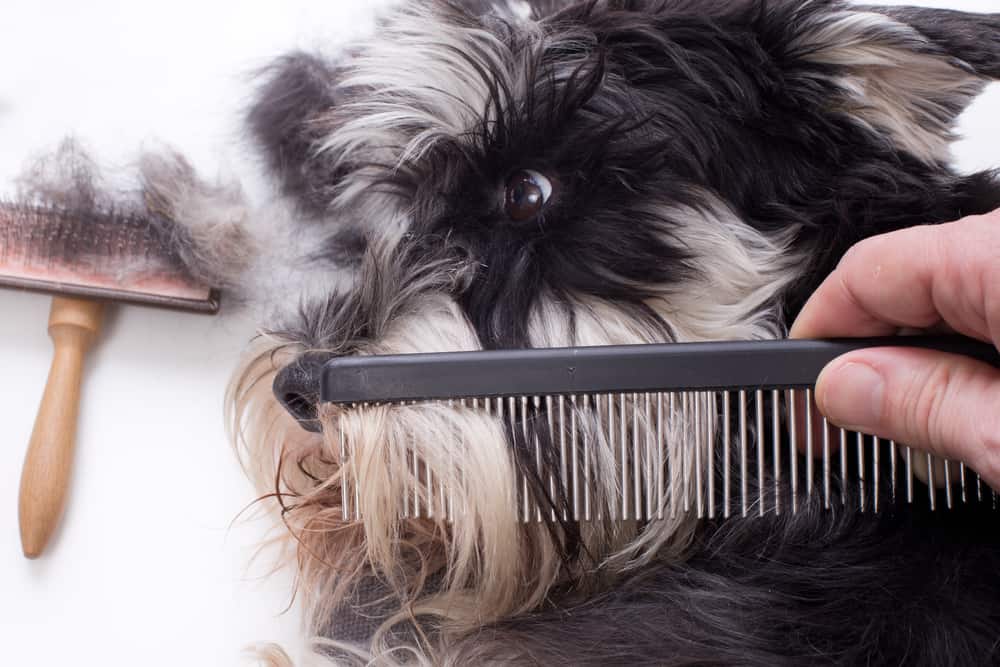 A Miniature Schnauzer is full of life. It is an extrovert and loves to be in the thick of the family action. It may throw itself at you while you’re lying down. This dog is not aloof or independent but needs to be with people, therefore expect it to be next to you all the time. Its playful personality makes it a great addition for families with well-behaved children.

This breed is a hardy, alert, spunky little dog. It can be feisty and may put on a show of scrappiness when confronted by strange animals. The problem is, this dog is not aware of how small it is, and is likely to talk trash to a much larger dog without knowing the consequences. That being said, it is important to keep him in line to avoid getting into trouble. 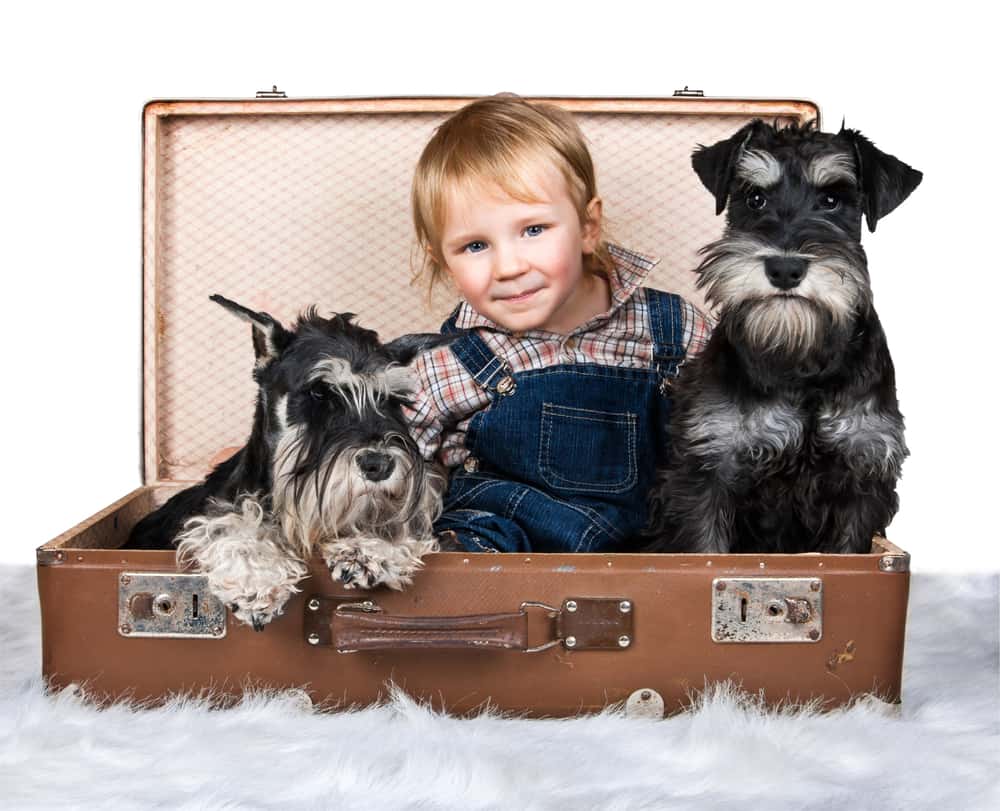 A Miniature Schnauzer is intelligent and learns quickly. It is smart enough to learn anything – basic manners, tricks, and feats that involve jumping on his little yet sturdy legs.

Being an intelligent dog also means that he’s a master of manipulation. At the same time, he can be really stubborn. This dog’s favorite way of rebelling is to pretend that he does not hear you when you try to make him do something. In order to fix this, he must know that you are his master and that you are in charge. If you let him get by with something, he will likely remember it forever and you’ll find the behavior escalating.

Because the Miniature Schnauzer is easy to train, it tends to do well in obedience and agility competitions. It also loves to participate in earthdog trials and often excels at them. After all, digging is what this dog is bred to do. 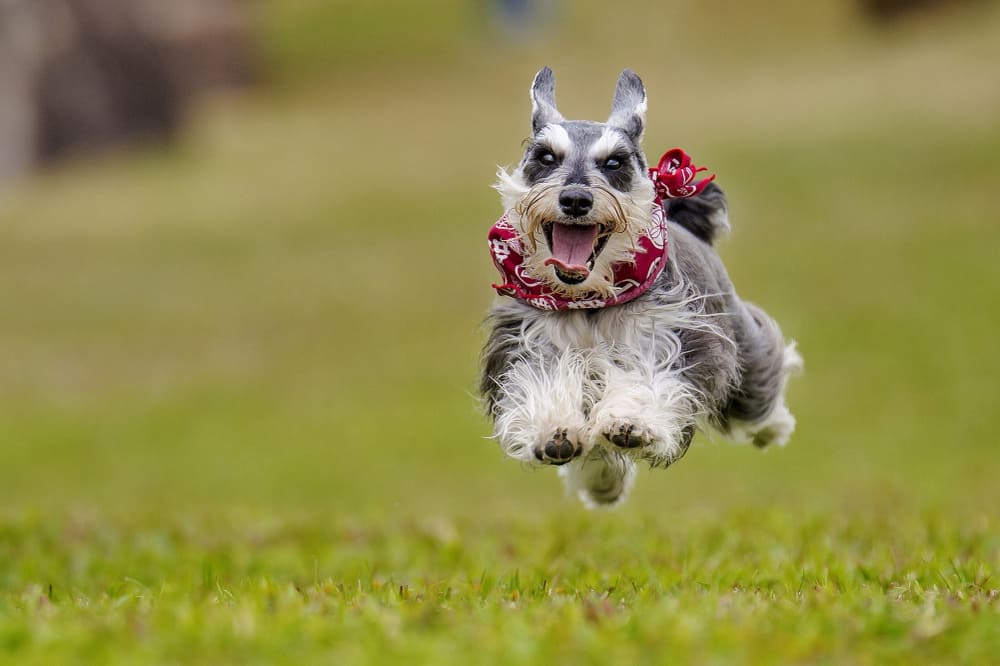 Because this breed is intelligent and energetic, it thrives on varied physical activities and mental exercises. Make sure that as an owner, you can give him both, or he’ll become destructive and may develop negative behaviors.

A daily long walk, around 45 minutes, is essential to maintain its healthy body. It is also active when inside the house, playing with its favorite toys, and following you everywhere. A fenced area where it can run and chase a ball safely is actually much better. 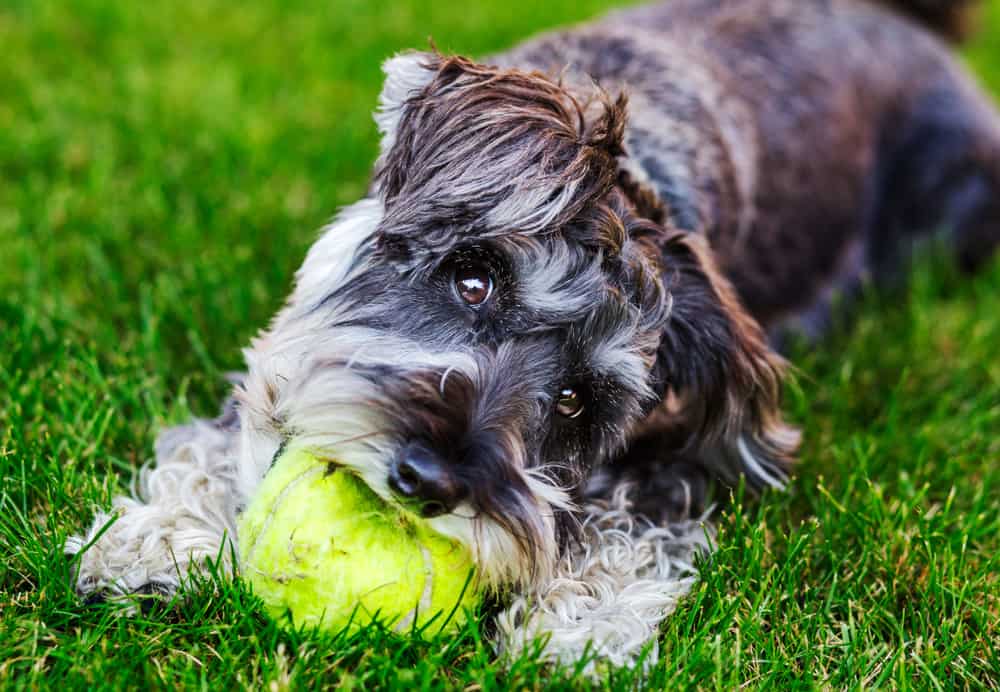 Because of this breed’s high intellect, it is necessary to keep training fun and interesting, as it can easily get boring with repetitive tasks.

Just like almost all dog breeds, Miniature Schnauzer should be socialized from an early age to grow as a well-rounded and well-mannered dog. This breed makes an excellent companion and can do very well in a number of canine sports, including agility, obedience, and rally.

Miniature Schnauzer has a strong prey drive. Small animals such as rats and gerbils are not good matches for this dog as it may not resist the urge to chase after them. Training won’t change that. After all, that’s what it is bred for.

The Miniature Schnauzer is happiest when with you, regardless of the activity you are doing. This dog is incredibly loyal to its family and loves to be the center of attention. It’s high energy pairs up well with children, making it a great family dog. Because it is a low-shedding dog, this is an ideal companion for people who are allergic to other breeds.

However, this breed is often suspicious of strangers and will alert you to visitors, burglars, and even blowing branches which you may think is too much. Once a new person, however, this dog is smart enough to learn cues from its owner. If a possible threat is at your doorstep, this little guy is strong in spirit but small in frame, so don’t expect a lot of fight. This dog is a “barker”, not a “biter”. 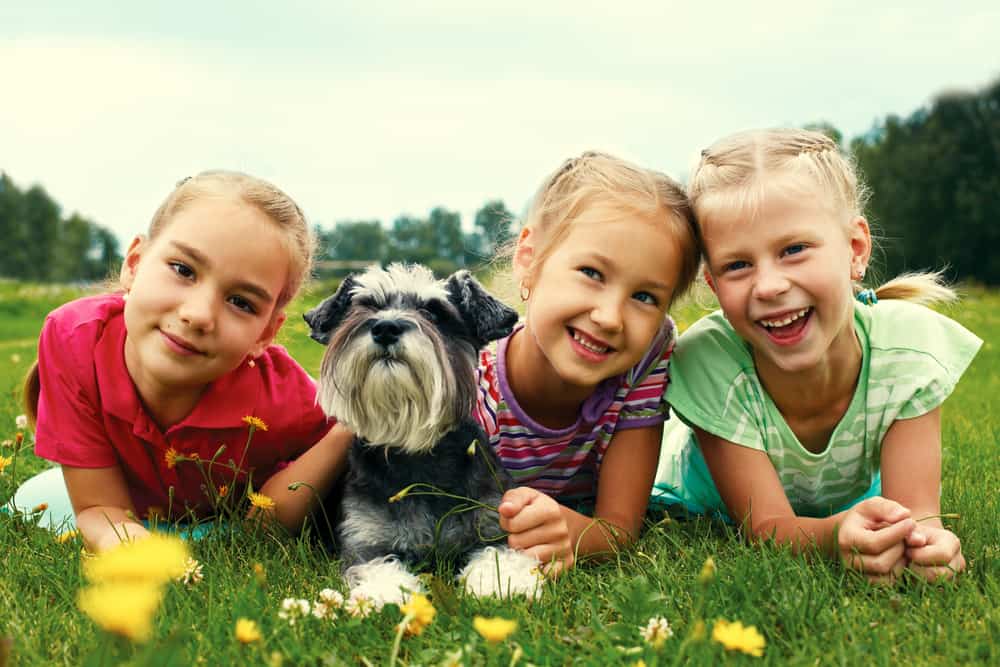 Because of its small size, Miniature Schnauzer can be a good city dog, provided that its daily mental and physical stimulation are met. It also enjoys large quarters and is great with suburban or farm families.

Aside from its capability to adapt well to apartment and farmland, it also gets along well with other animals or kids in the house. Home and family-oriented, this breed makes a great watchdog. However, expect it to be alerted and bark at almost all noises. If your apartment has thin walls or easily annoyed neighbors, you might want to consider a different breed.

The Miniature Schnauzer may experience separation anxiety if it realizes that it’s alone.
If you have a Miniature Schnauzer puppy that has been with its littermates and mother all its life, being alone might be a very scary situation, which may result in crying, barking, and howling for the first few nights. To help your pup adjust to the situation, provide toys for distraction such as stuffed toys to keep it entertained until you get home. 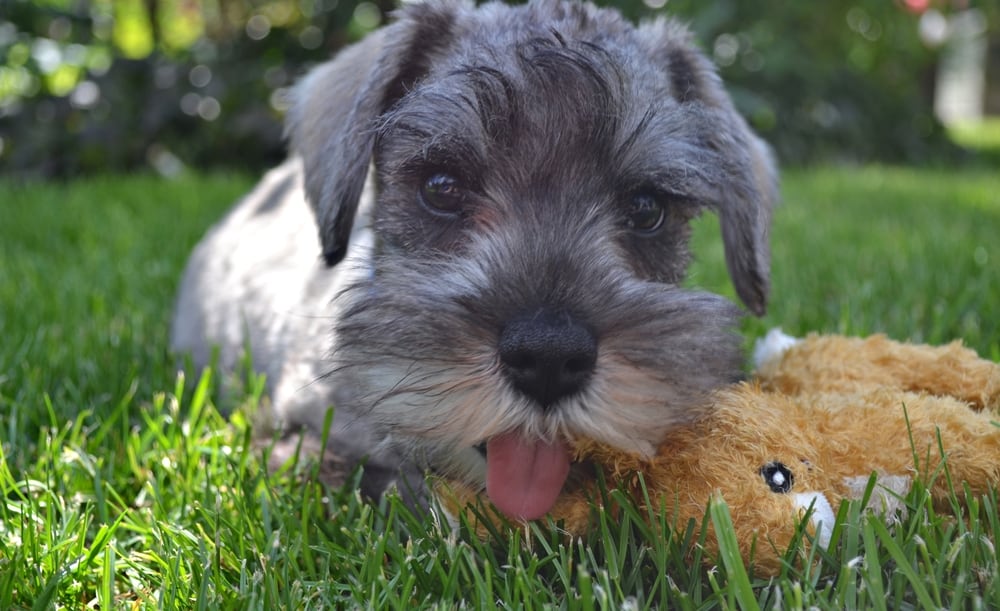 Generally, the Miniature Schnauzer is considered a healthy breed. Although there are a few conditions that it may be prone to, including high blood fat levels, cataracts, hyperlipidemia, pancreatitis, liver shunts, and urinary stones.