Who would win a fight between the world’s largest living primate, gorilla, and the largest arboreal ape on the planet, the orangutan? The orangutan and gorilla are both majestic apes of the amazon, damned with great strength and intelligence. But who would steal a march on the other?

Gorillas are bulky mammals with broad chests and shoulders, large palms, and forearms that are much shorter than the upper arm. They have a black hairless face, with small eyes and large prominent nostrils. Adult males have a distinct sagittal crest along the midline of their skull and white hair on their lower backs hence their name ‘silverbacks’. Females have the sagittal crest as well but it is not as pronounced as the males. Eastern gorillas are a larger species with longer hair on their arms while their lowland western cousins have shorter hair that somewhat reddens on their heads. 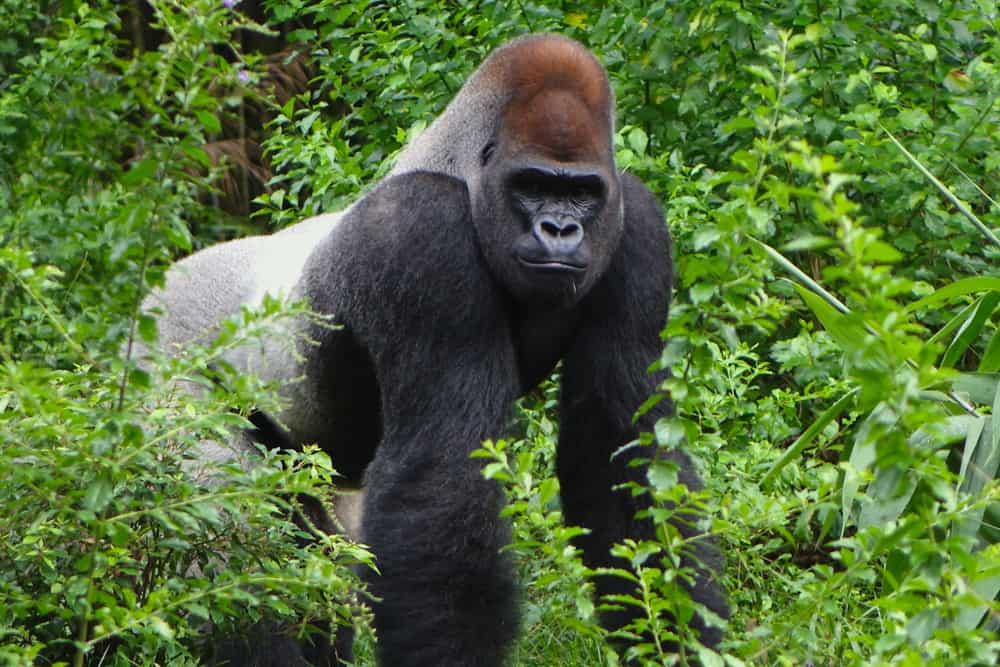 Orangutans are arboreal primates with extra-long arms and a dark tan or brownish skin that is covered with coarse, sparse red hair. Their name is a Malay word which means “man of the forest”. Adult males and some older females may have partially or entirely bare backs, but the hair on a male can be so long to look like a cape when he moves his arms. Older males develop a unique wide cheek pad, an eccentric feature among the apes. 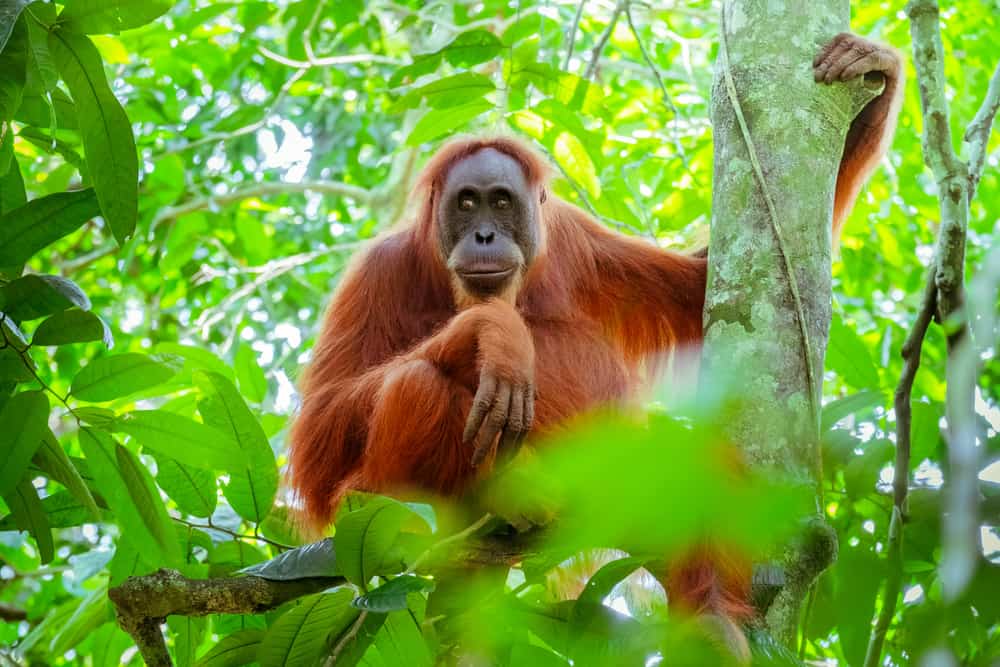 Adult male gorillas can weigh up to 441 pounds (200 kg), with the female around half their size. They can reach a height of 5.5 feet (1.6-1.7 meters) when standing on two feet which is the average height of an adult human. 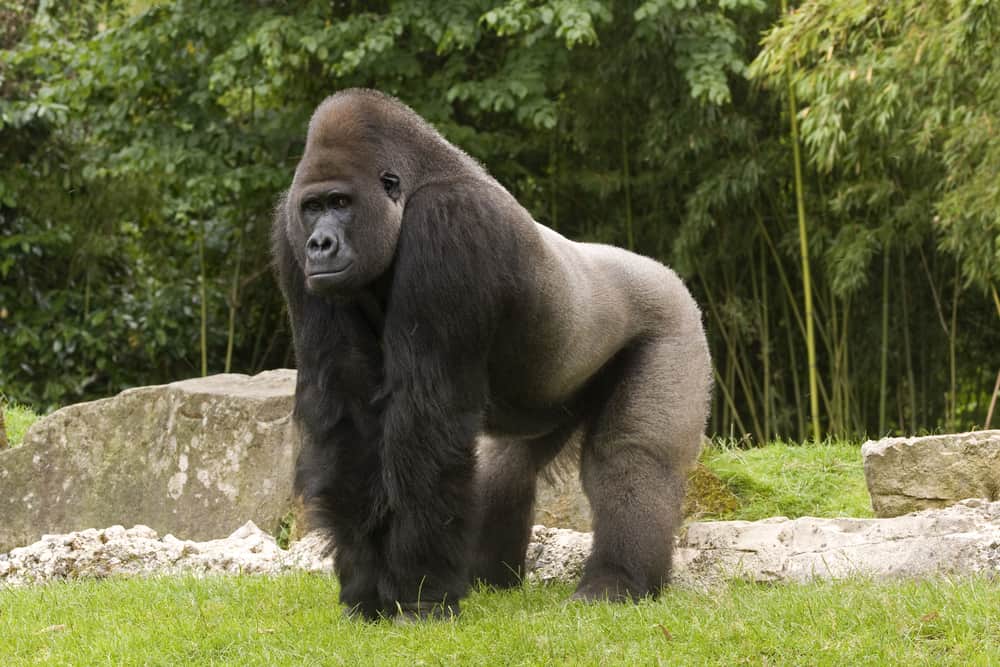 Orangutans, on the other hand, can grow to a weight of between 73 to 180 pounds(33-82 kg) and standing height of 4-5 feet (1.2-1.5meters), same as that of their counterparts. The females are half the average size of the males. Their hands can stretch to a span of over 6.6 feet (2 meters), from fingertip to fingertip. 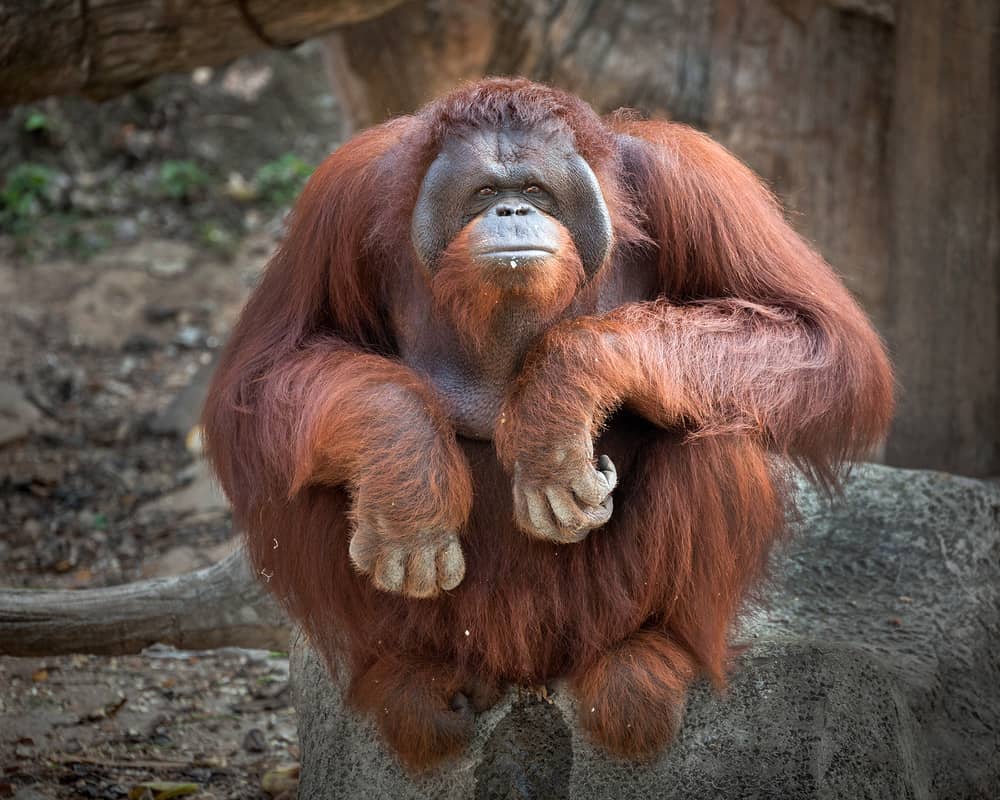 The average lifespan of these apes is estimated to be about 35 to 40 years in the wild but may live up to 50 years in captivity.

The volcanic slopes of Rwanda, Uganda, and the Democratic Republic of Congo are where gorillas can be found. They live on the lowland tropical rainforests of Central Africa, with some subspecies located in the montane rainforests and others in the bamboo forests. 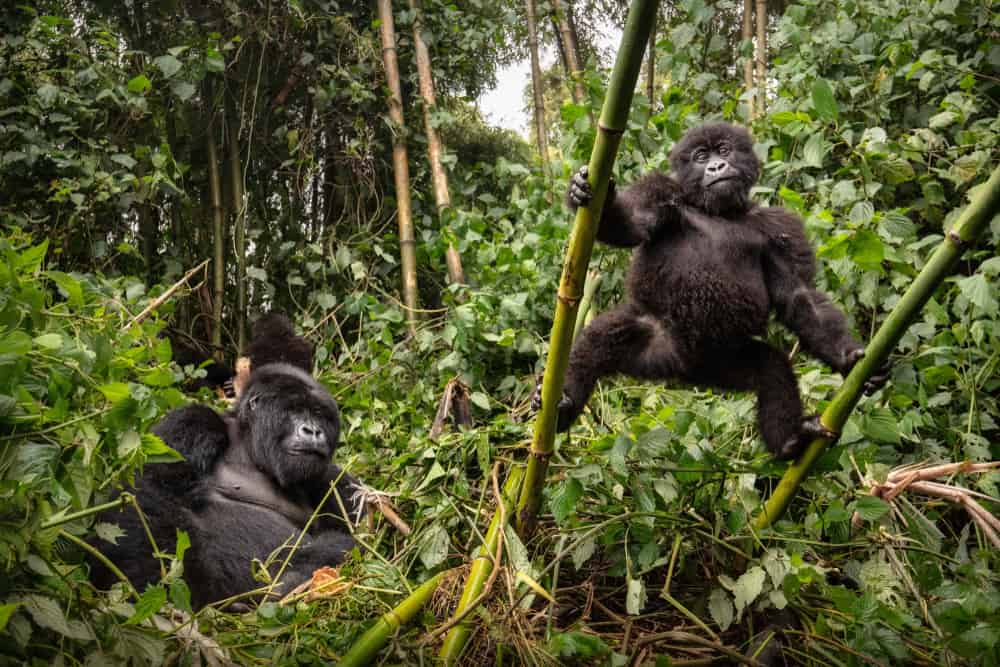 Orangutans used to roam in Southern China, Malaysia, and the Indonesian island of Java. Today, they can only be found on two islands, the Sumatra or Borneo, hence their distinctive species separation, the Sumatran and Bornean orangutans. 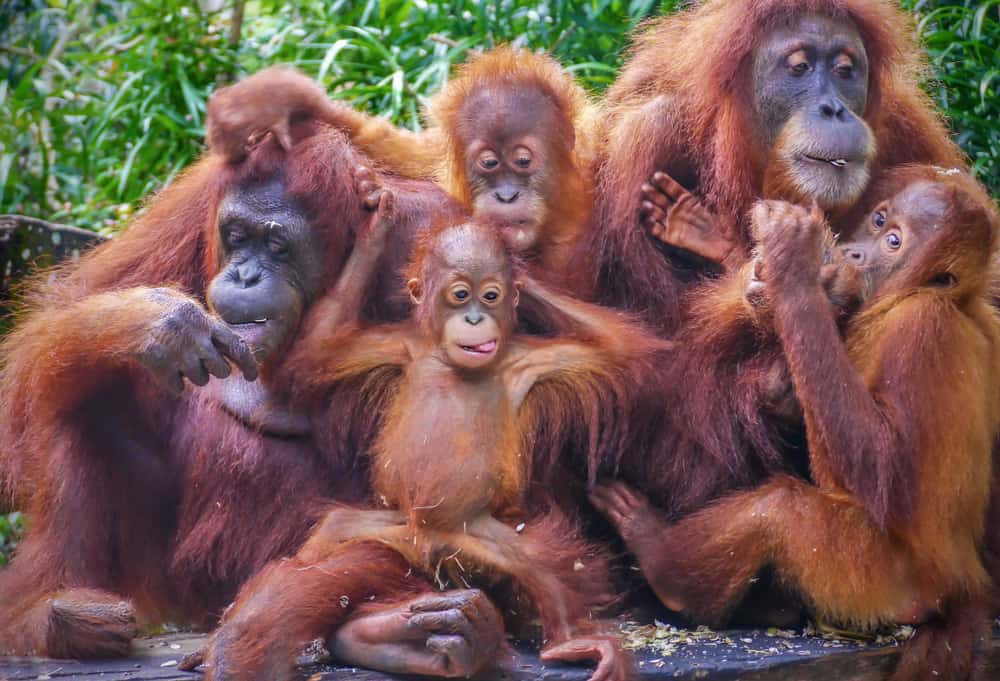 Gorillas live in groups of up to 30 individuals known as troops, led by a dominant alpha male, the silverback. Troops comprise of other young males, some females, and their offspring. The alpha male organizes activities for the troop, such as eating, nesting in leaves, as well as migration. He also decides where the troop would sleep. Can gorillas swim? These apes cannot swim and have a reputable fear of water. 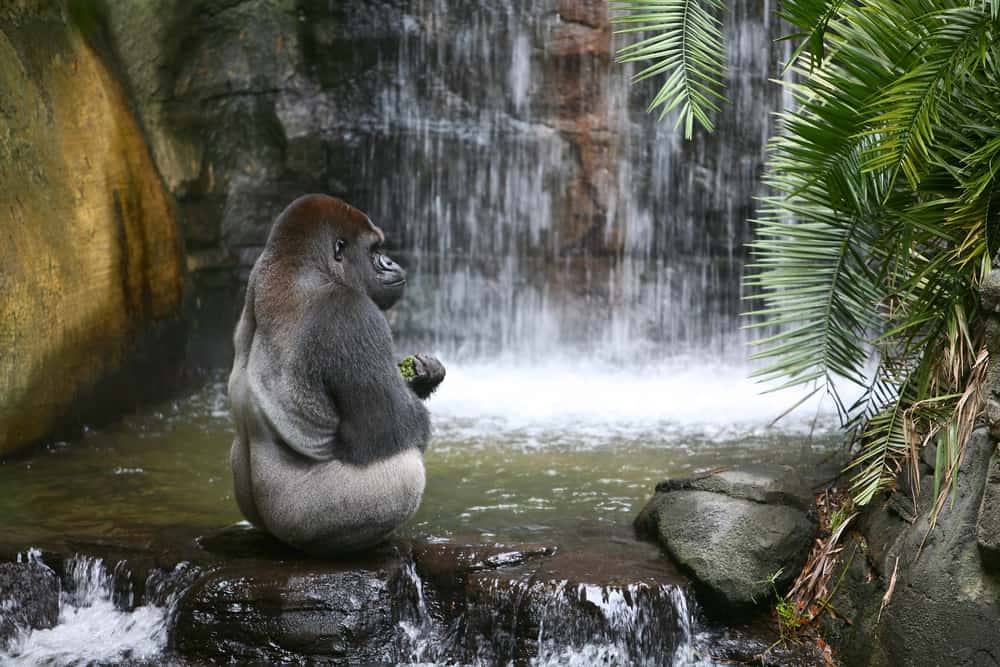 Unlike the gorillas, orangutans are solitary primates and only interact with each other for mating or a mother caring for her offspring. Nonetheless, they are known to spend 90% of their waking hours on trees. They sleep on a platform, constructed by bending leaves and breaking branches and twigs. They are also unique apes, frequently using vegetation to protect themselves from the rain and can swim through lousily. 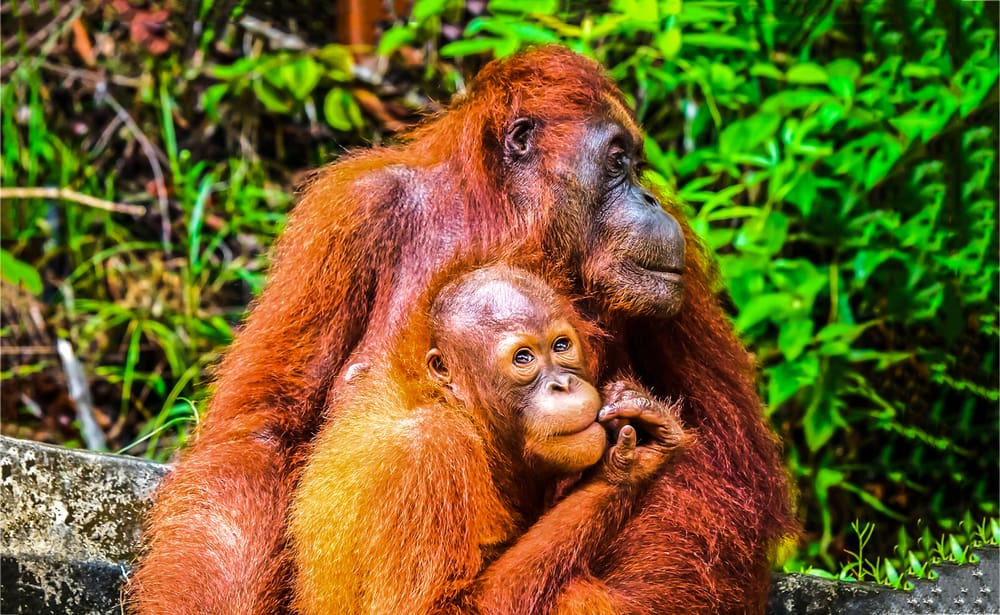 Gorillas can scream, grunt, growl, roar, and even hoot like owls as a means to communicate. A scream or roar is made when they are angry or used as a dreadful display of power which is often succeeded by a charge. Additionally, whinny type of vocalization is made particularly by males whereas copulation grunts can be produced by both males and females. Barks or a hoot series are let put upon detection of another group or a potential predator. Laughs are the most common type of communication, usually made in what seems like making fun of their surroundings. 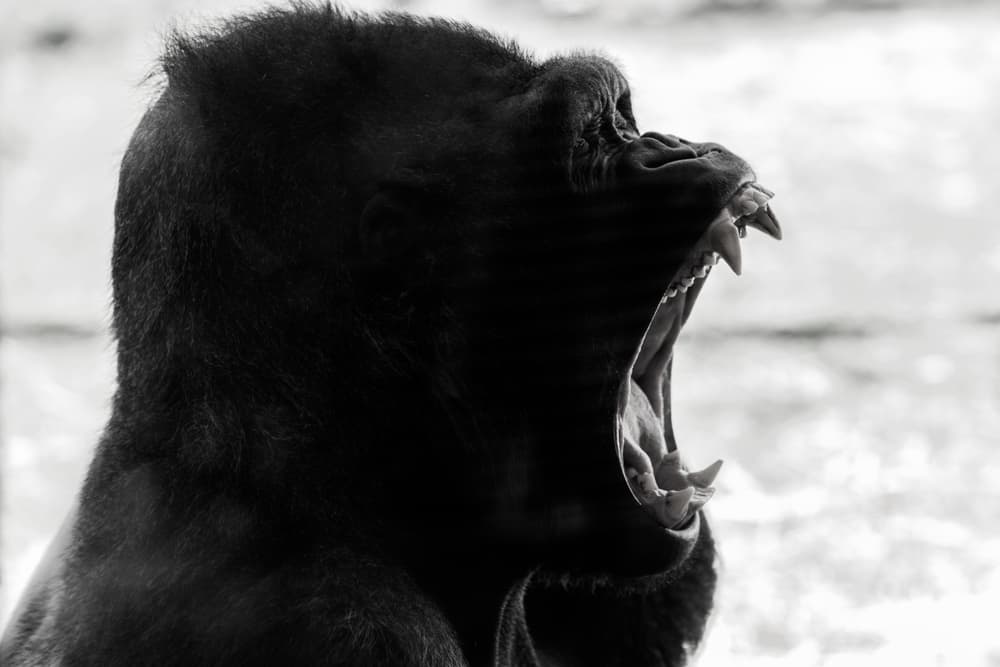 Orangutans can make a variety of sounds even though they are the least vocal of the ape family. They let out loud kiss squeak calls, a sound similar to human smooching, when agitated or when they spot a predator. A raspberry call is made during nest building and a soft hooting call is specifically made by infants. Territorial males are often intolerant of their kind and would make loud calls, echoing a loud roar using their pendulous laryngeal sacs. Even so, both males and females can make rolling guttural sounds to express aggression. 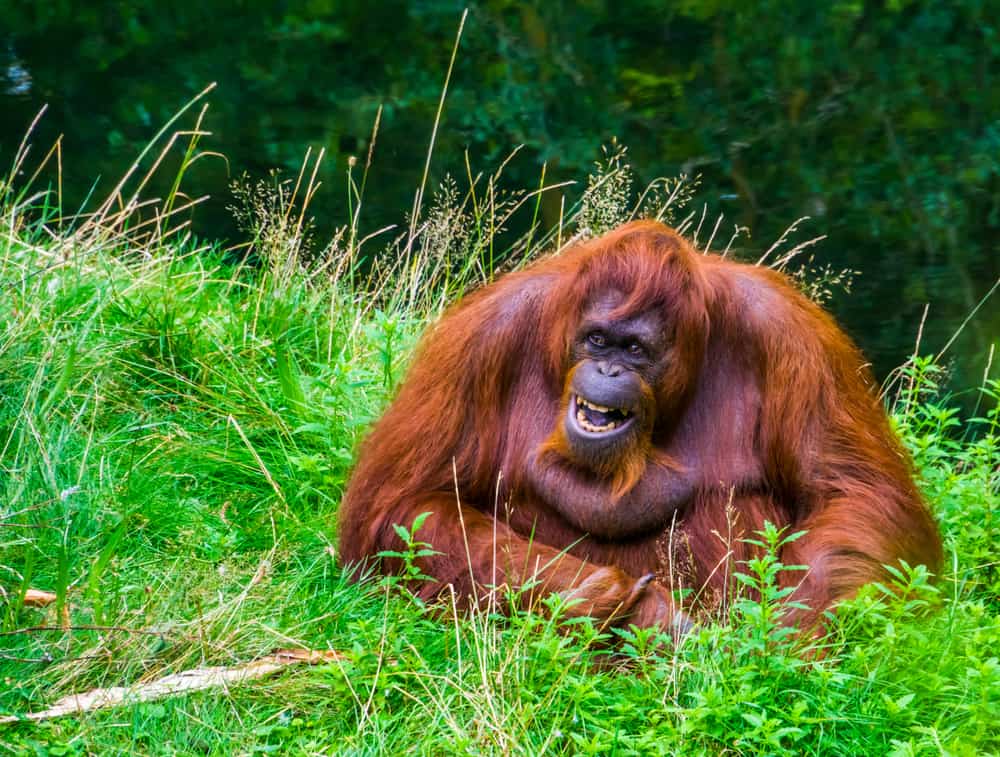 Orangutans have been declared the most intelligent primates, they have the power to learn and solve problems. If you give an orangutan a screwdriver, he’ll open up his cage and walk away but a gorilla would just toss it over his shoulder. In comparison to a human’s IQ test of 80 to 115 points, orangutans and gorillas can reach an average IQ of between 75-95 points.

Both gorillas and orangutans live strictly on a vegetarian diet, devouring vegetables, roots, fruits, and invertebrates like termites and ants. However, on very peculiar occasions, orangutans have been spotted eating meat.

The jaws of a gorilla are exceptionally strong, supplemented with 2 inches long canines that are proportionately larger than a human. With a bite force of 1300 pounds per square inch, they can grind through the barks and roots of plants easily. 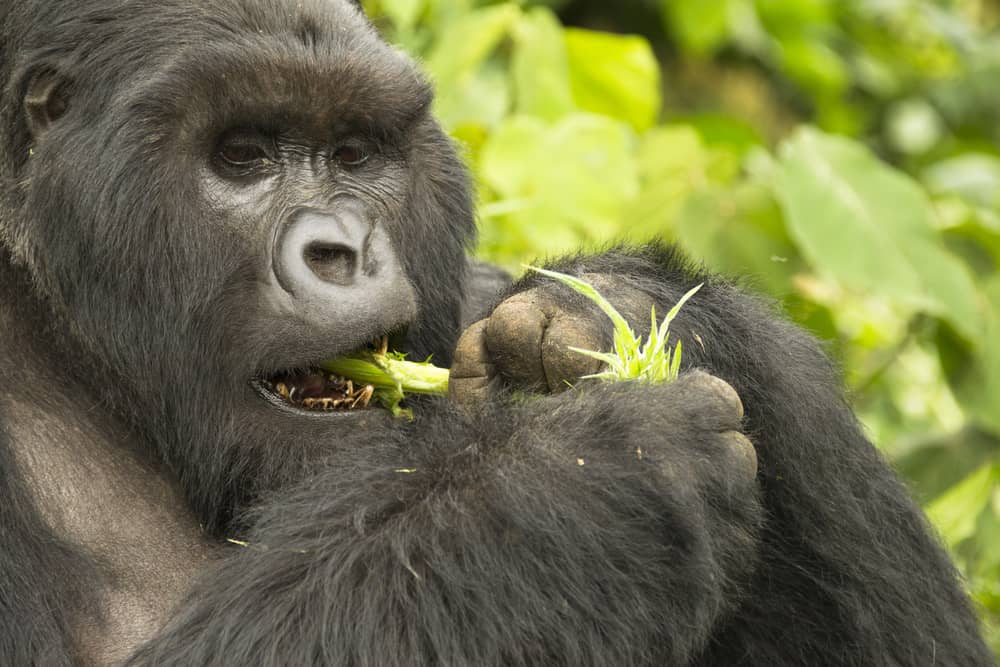 The jaws of the orangutan are extraordinarily suited for biting into the germination bank of seeds and cracking them. Feeding on an average of 120-1001 seeds per day, their jaw strength has evolved to accomplish this formidable task. The bite force on their 2nd molar was calculated to be 576 pounds (2560 newtons), far much greater than the bite force at a human’s second molars of between 247 to 292 pounds (1100-1300 newtons). 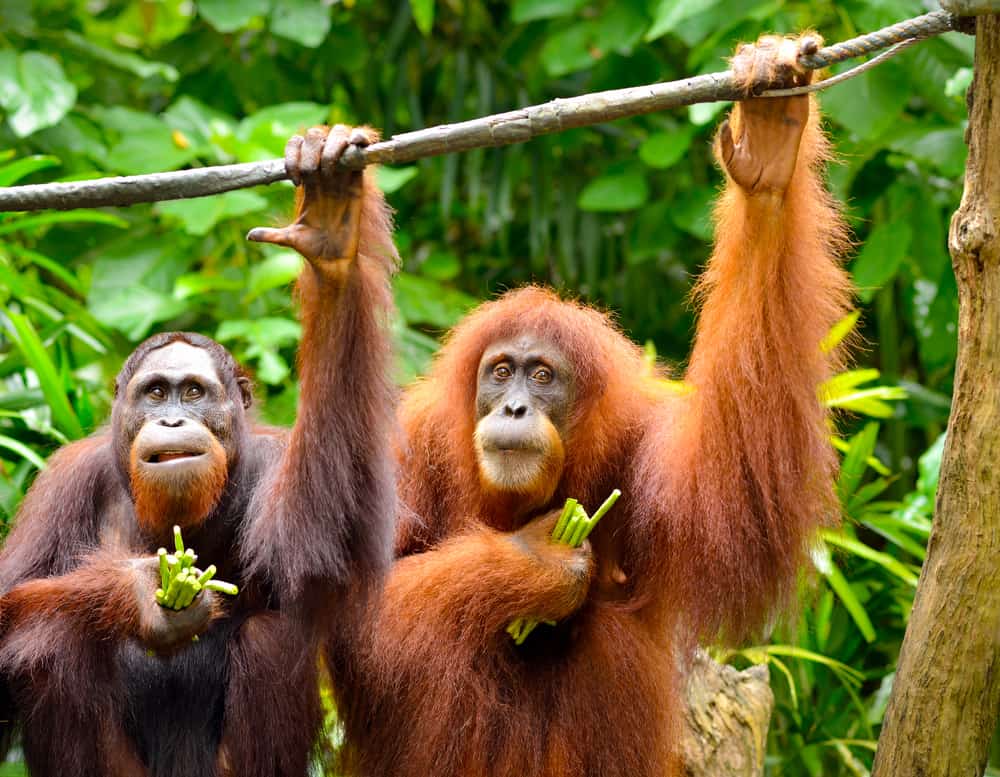 In contrast to their heavyweight, gorillas are fast on their two wheels and can cover about 20 to 25 mph (30-35 km/h).

This is however not the case with the orangutans who can reach a top speed of 6 km/h (2.7mph) on the ground. They are rather slow compared to the average walking speed of a human, which is 3-4 mph, therefore one could easily keep pace with them.

Despite their formidable size, gorillas are rather gentle animals. However, they can be quite aggressive when spooked. Although most gorilla violence is directed toward other gorillas, they require careful handling in the presence of humans as they can easily get startled. The good news, they always send a warning before an attack by either beating their chests, roaring or stumping their feet on the ground thunderously. 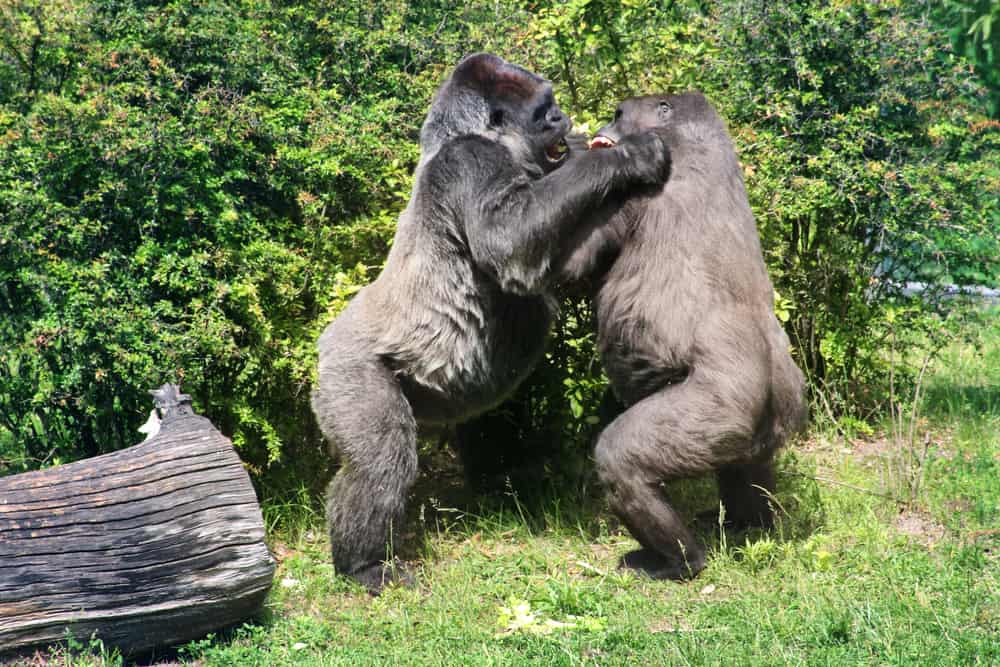 On the contrary, orangutans are known to keep to themselves. They are the most gentle-natured of all apes and would sit for hours gazing at nothing in particular. They avoid fights or confrontations but this should not be mistaken for weakness as they are seven times stronger than an average human and could rip off your arm easily. 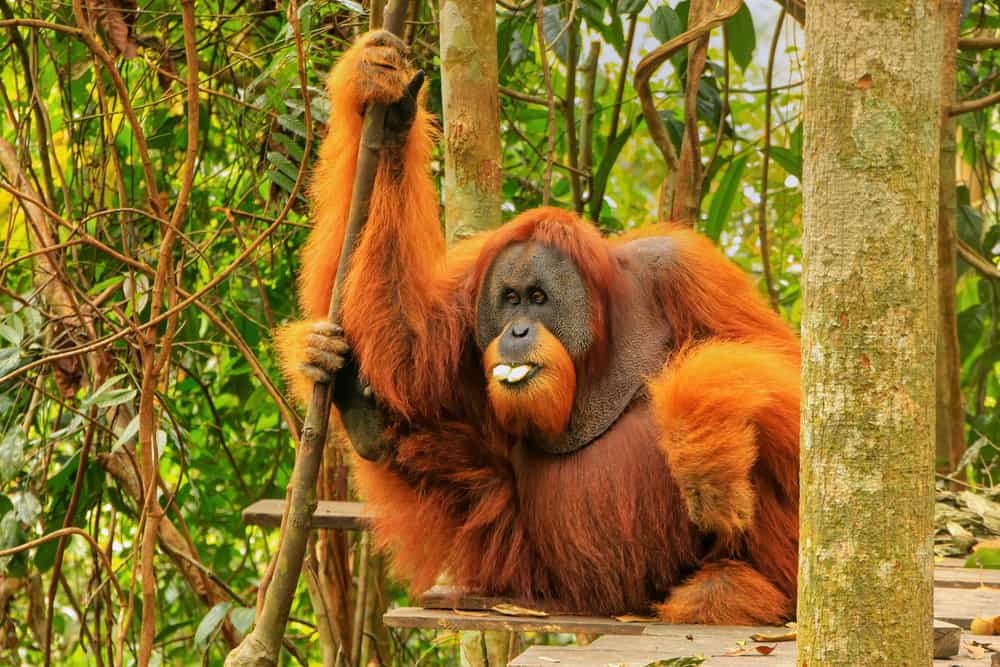 Who would win the fight? 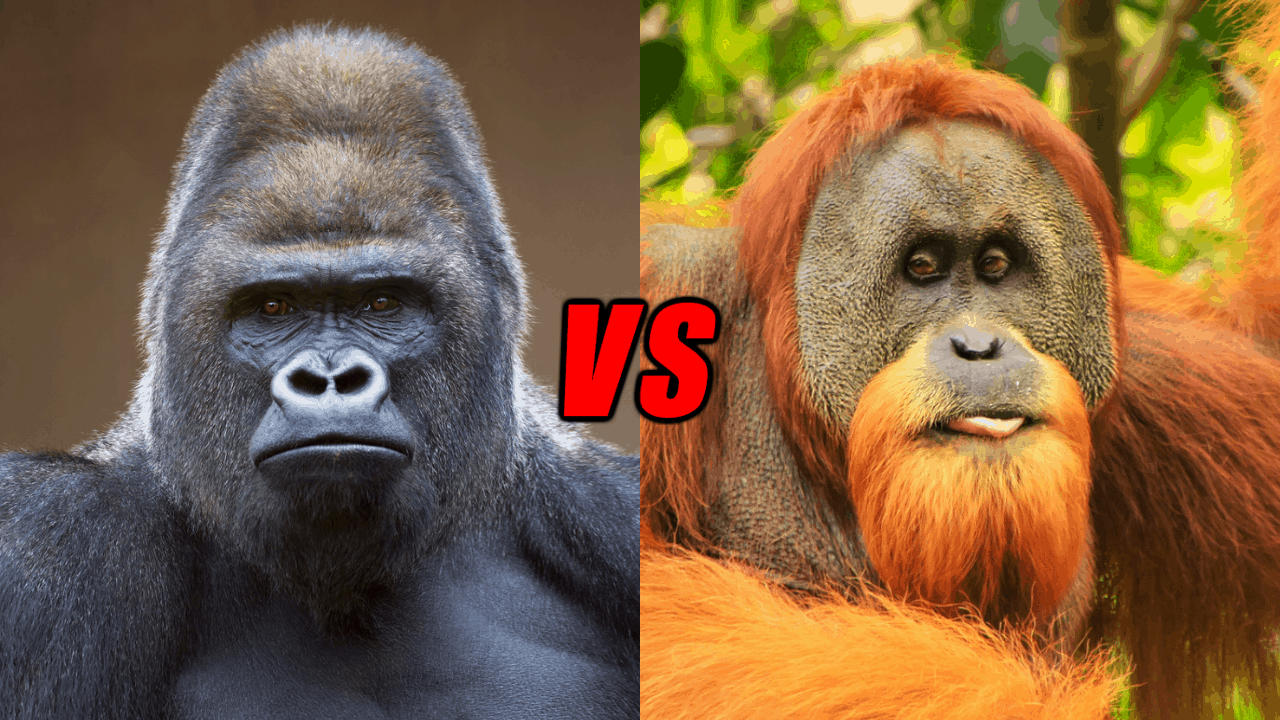 A pound for pound fight between these two giants would surely be appealing to watch. However, they exist in completely different habitats and have nil chances of ever crossing paths.

Although assuming a male silverback and an adult male orangutan was on a battleground, the gorilla might win the battle. In size, gorillas are mightier and stockier than their opponents. They have large robust hands that could sufficiently deliver a lethal blow. Also, their long sharp canines are quite pronounced and they would likely use this to their advantage. They are also well built for ground fighting as they have learned to establish dominance in their troops through physical force.

Orangutans, on the other hand, are arboreal gentle animals, poorly adapted to ground movement. They are also solitary creatures that avoid confrontations with other animals. Their hands, though long and powerful are more effective for their climbing skill rather than signaling a blow, let alone hitting. Moreover, they are lacking in protruding jaws and gnawing canines like their counterparts.

Though orangutans are strong for their size, gorillas are stronger and physically built for fights and thus, would easily win. This battle could only go sideways only if an adult male orangutan encounters a sick or injured silverback. Otherwise, the silverback is always the prizewinner.