A large head with cute, triangular, deep-set eyes, it’s no question that the American Akita is one of the cutest large-sized dog breeds out there. They have a powerful appearance and are ready to protect you from any harm. They are a symbol of good health, happiness, and long life.

We can say that the history of American Akita follows that of the Akita Inu. The breed got its name from the third snowiest prefecture in Japan – the Akita prefecture. In the early 1600s, they were bred to hunt and guard homes.

During World War II, Japanese breeders were asked to hand all of their dogs, except German Shepherds, to be used as a source of military garments. To save Akita from extinction, they were bred with German Shepherds which resulted in varied types of Akita.

In 1937, Helen Keller imported the very first Akita in the U.S. It instantly grew popularity among American servicemen. In 1956, the Akita Club of American was established, and the American Kennel Club officially recognized the breed in October 1972.

However, there was a debate on whether the American Akita and the Japanese Akita are two different breeds. Only AKC considers these two to be two varieties under the same breed, while the other club considers them as two separate breeds.

At present, the American Akita is the 47th most popular breed in the U.S.

American Akitas are double-coated dogs with a rich, dense undercoat and a short topcoat. It is a large dog with a strong appearance – a big head with a small, triangular eye resembling a bear, and a tough, sturdy bearing.

American Akitas come in a variety of colors, including all types of brindle, solid white, black mask, white mask, self-colored mask, and pinto. They can also have the traditional Shiba Inu coloring pattern called “Urajiro.” 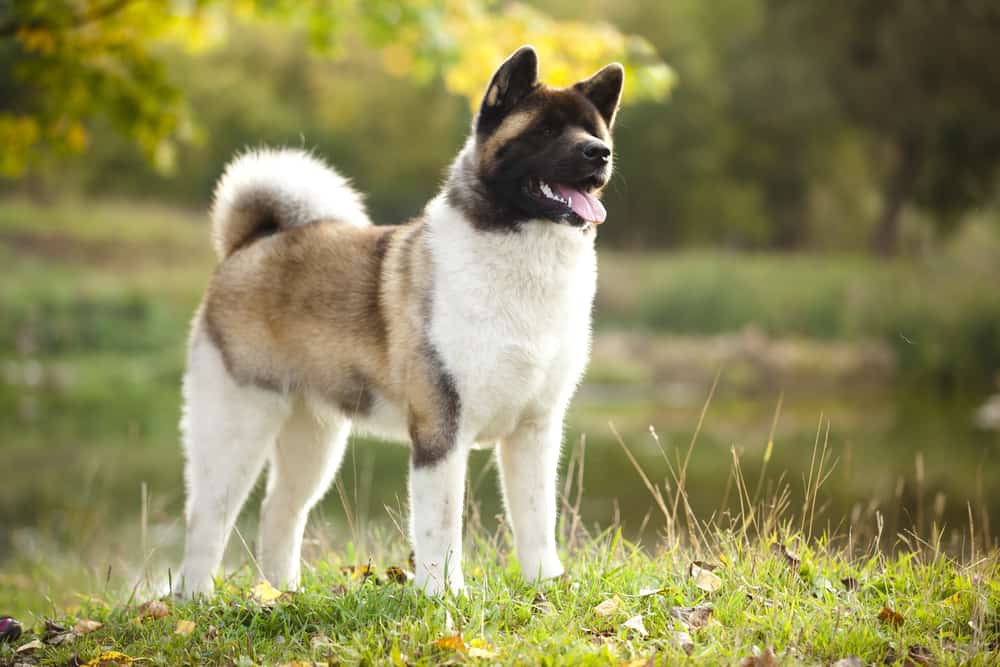 Matured male American Akitas generally stand between 26 to 28 inches and weigh around 85 to 130 pounds. On the other hand, mature females stand at 24 to 26 inches, with a weight of around 70 to 110 pounds. 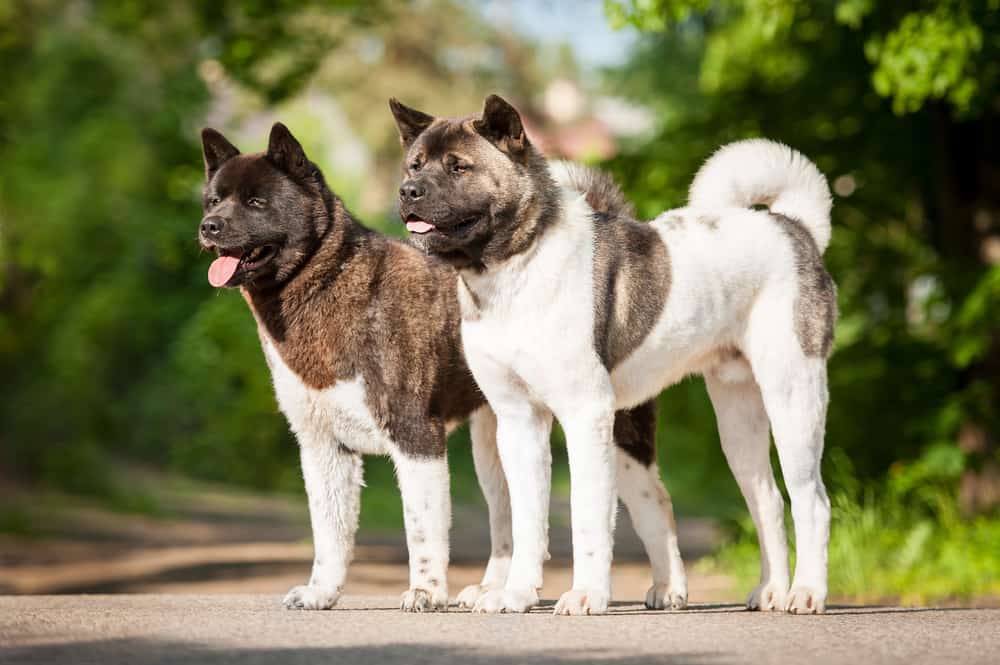 On average, American Akitas can live from 11 up to 15 years, depending on how they were taken care of by their owners. Regular check-ups, along with proper diet, physical exercise, and a lot of love and affection from their families can prolong any dog’s life.

The American Akita sheds a lot, but they are excellent self-groomers so grooming them wouldn’t be so difficult. They will shed heavily about two to three times per year so make sure to have a vacuum cleaner with you since their fur will stick on your furniture, clothes, floors, and carpets.

Brushing them weekly will keep their luxurious-looking coat healthy and in its best condition. Baths should be done every three months, more often if they love to play outdoors.

The American Akitas are popular for being faithful guardians. They are fearless and ready to protect you at all costs. That said, they are also ready to give unlimited love and affection to the right family.

However, they have one uncommon trait, which is mouthing. They love to always have something in their mouth. Do not be bothered if they try to take your wrist with their mouth, it’s their way of communicating with you, such as they want you to take them outside. Some owners find this trait adorable, some do not. This trait is also a good way to give them a job to do, such as bringing the newspaper, mails, slippers, or anything that they can carry.

Another unusual trait of American Akitas is their “feline” habits. They groom like a cat, and stalk their prey quietly and body low to the floor, like a tiger.

This breed can also be stubborn and may not like the presence of strangers. That being said, they are not for timid and novice owners. They need a firm and experienced owner that will teach them how to properly interact with other people and animals.

Keep in mind that American Akitas consider prolonged eye contact as a provocation, thus they tend to respond aggressively. 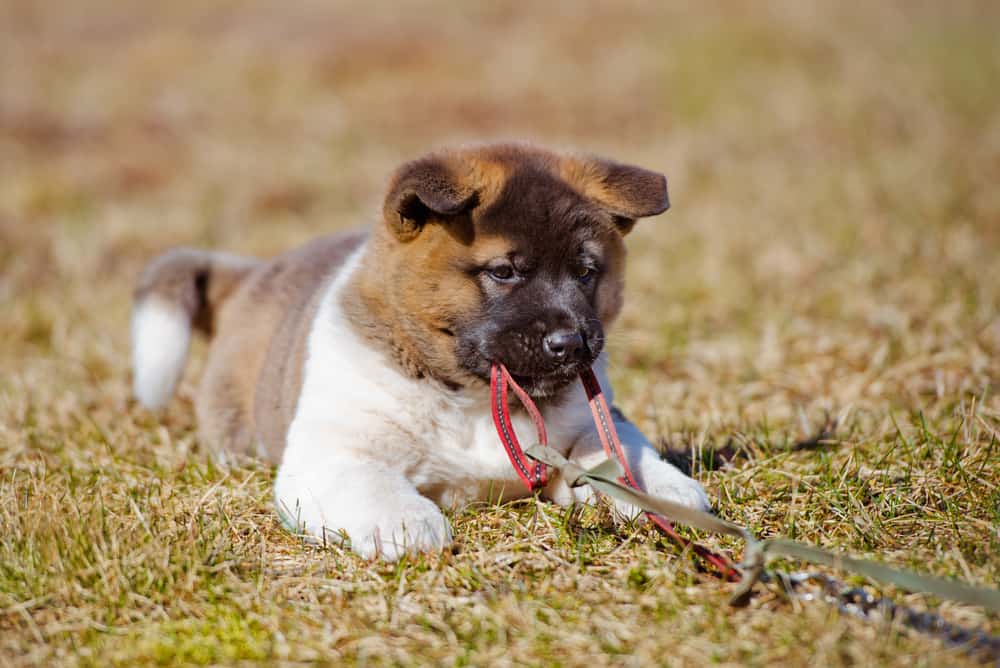 American Akitas have high intellect. They are smart, which means they need varied routine, aside from regular mental stimulation. A bored Akita may develop destructive behaviors, such as barking, chewing, digging, and aggression which you don’t want to happen, of course.

American Akitas were originally bred to guard royalties and nobles. They were also used to hunt wild boars, black bears, and in some cases, deers.

Because of their natural hunting instinct, American Akitas responds well to vigorous activities. While they can still hunt games and waterfowls, they can also be great competitors in canine sports if properly trained. And with their cat-like actions, Akitas excel at agility and tracking. 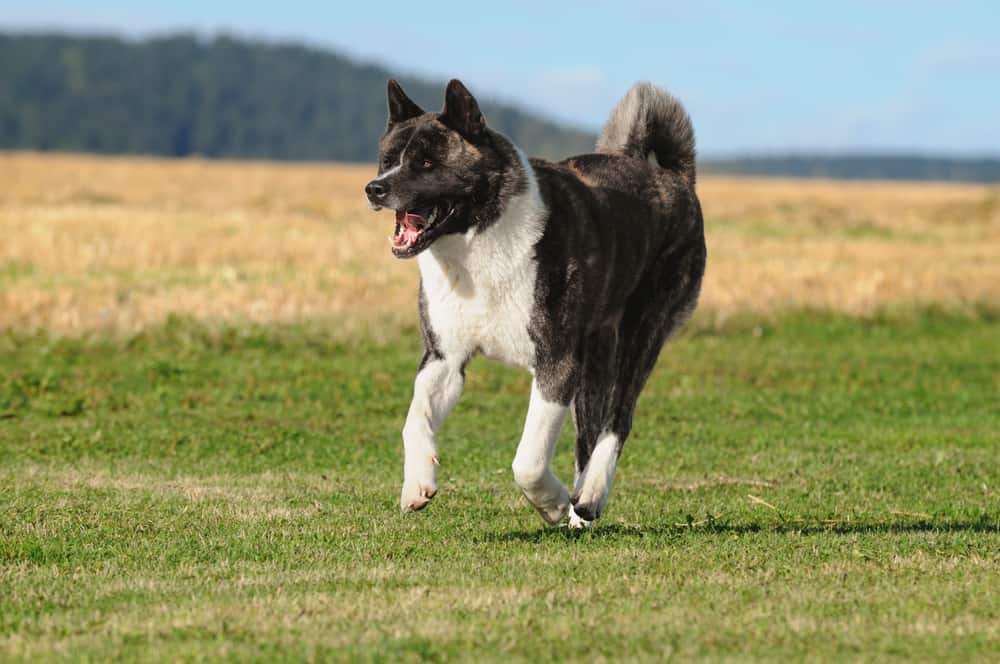 While they are not highly energetic, American Akitas still need daily physical exercise and mental stimulation to keep them from becoming bored, or else they’ll develop negative behavior.

A 30 minute to 1-hour walk, jog, or play in the yard is what they love to do. However, visiting a dog park is not recommended since they can be aggressive towards other canines.

They extremely love the snow. During winter, expect them to be all giddy and excited. It’s also the best time to bond with them outside. 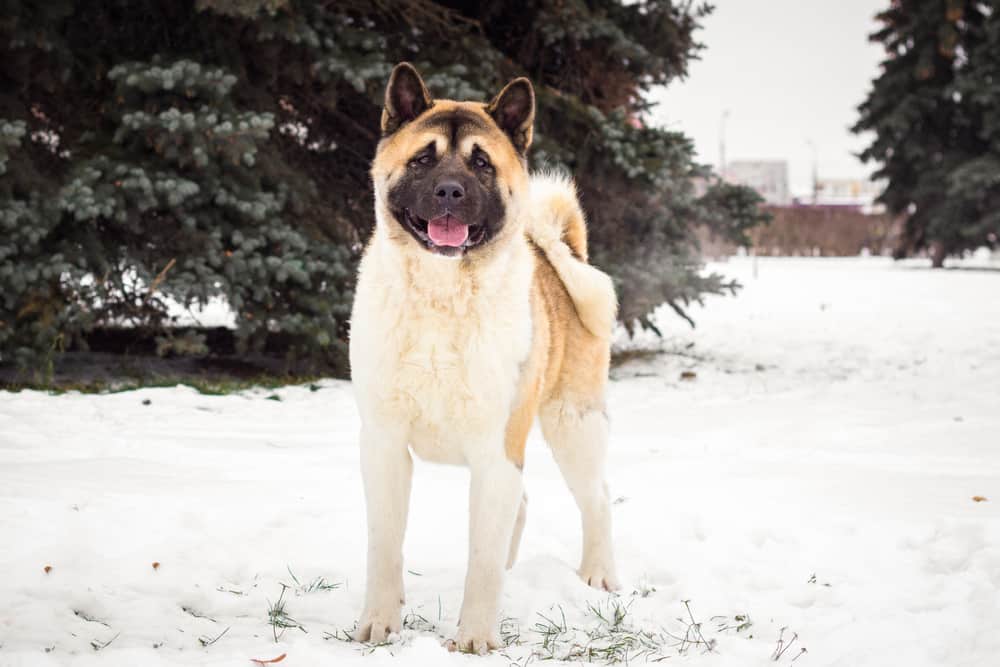 It’s already given that the American Akita is a smart breed, although it can also be headstrong which makes training a challenge. They also have a powerful and sturdy build, and would even try to dominate you. A skilled and patient owner is required to properly train this dog.

Instead of using harsh training methods such as yelling, use positive reinforcement techniques. If you know how to respect him, he will reciprocate it twice as much.

The American Akita is devoted, loyal, and a great protector. One thing is for sure – training this dog is immensely rewarding. 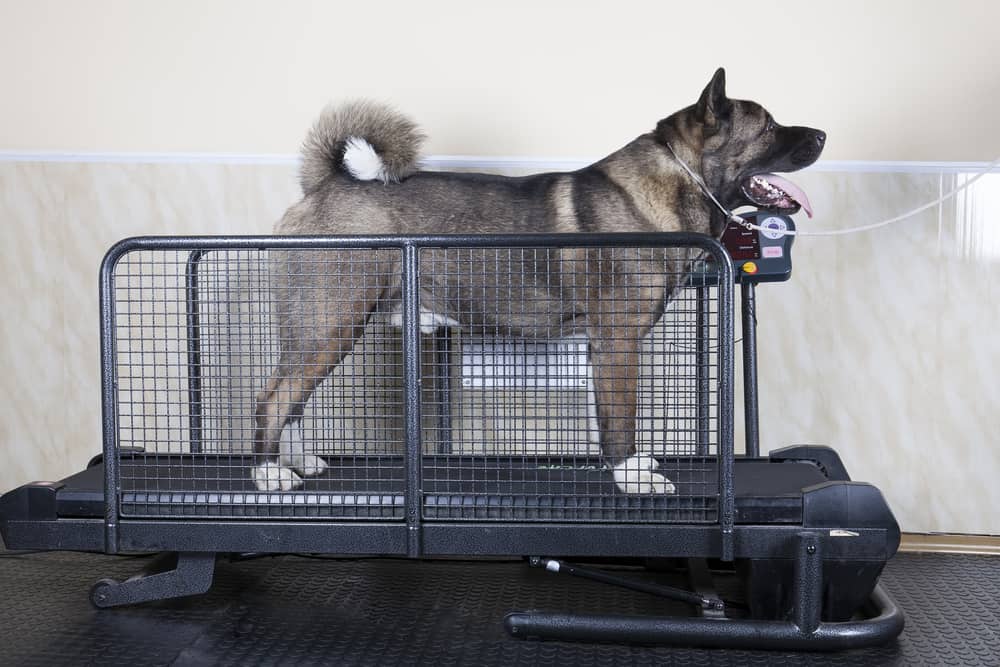 If you decided to own this breed, you’ll have a caring and clingy guardian that will follow you everywhere, always ready to serve you.

The American Akita is a natural protector, it is brave and always willing to defend you in any situation they perceive to be a threat. They are relatively quiet, and won’t bark unless given a reason. Some owners say they love to “talk” to themselves, like mumbling and grunting, or moaning.

However, Akitas can be reserved and aloof towards visitors, although they will welcome them if their owners are at home. Early socialization is important to keep them well-behaved and calm around other people.

American Akitas are best suited for families with older children who know how to play with them. Toddlers may mistreat Akitas, which in turn, lead to trouble or sudden aggression. 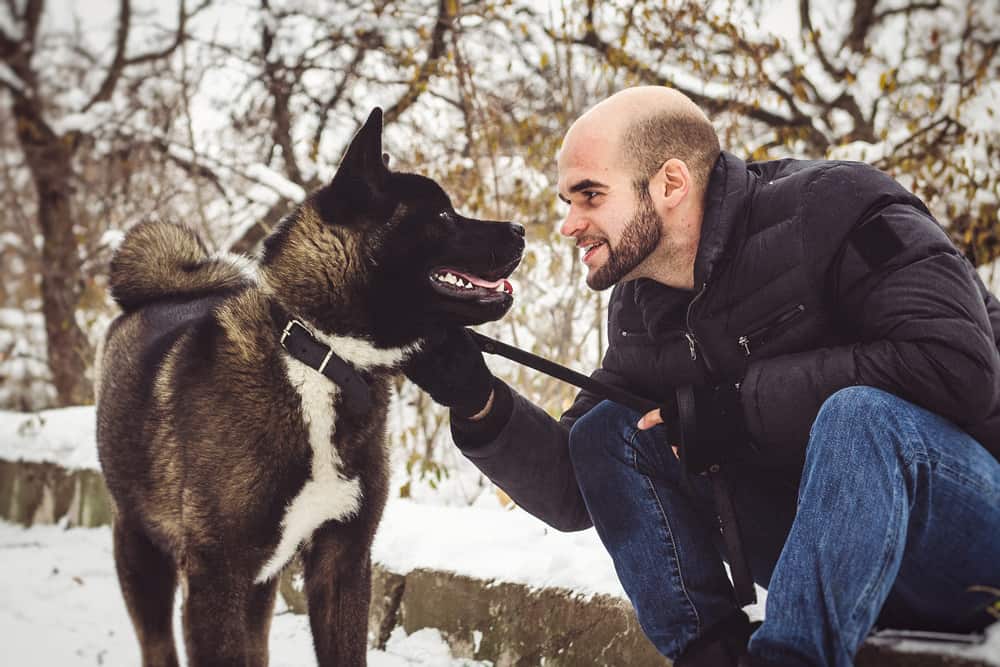 Although American Akitas can do well in apartments and condos, they thrive in a home with a securely fenced yard. They are protective and may interpret passersby as intruders, thus the importance of a fenced yard.

They are a one-pet household since they have a tendency to be aggressive and chase other pets in the house. 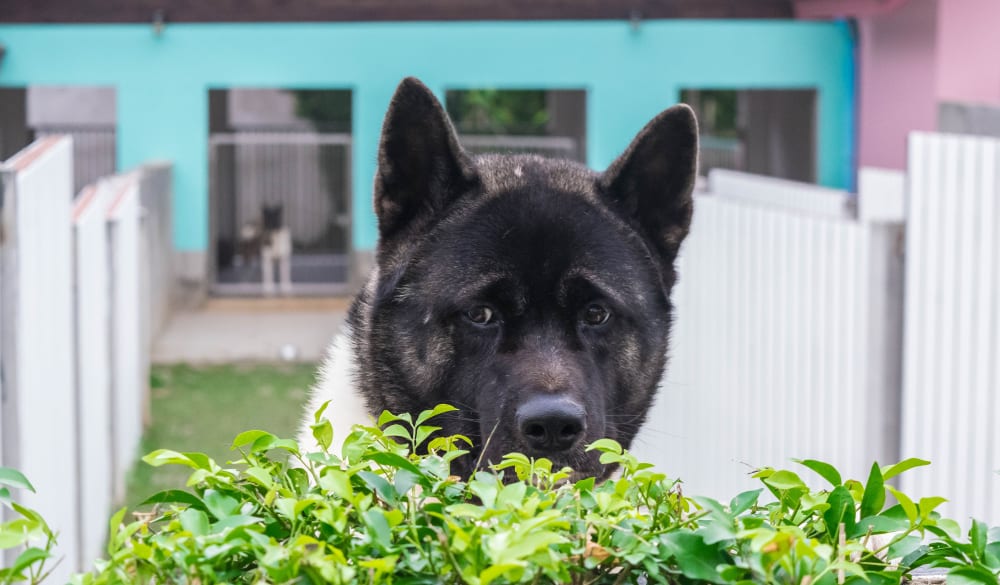 American Akitas should be kept inside the home with their human family. If left outdoors or at the kennel, they may feel lonely and separated. The same thing goes when they’re left alone for a long time – they can become destructive and aggressive. 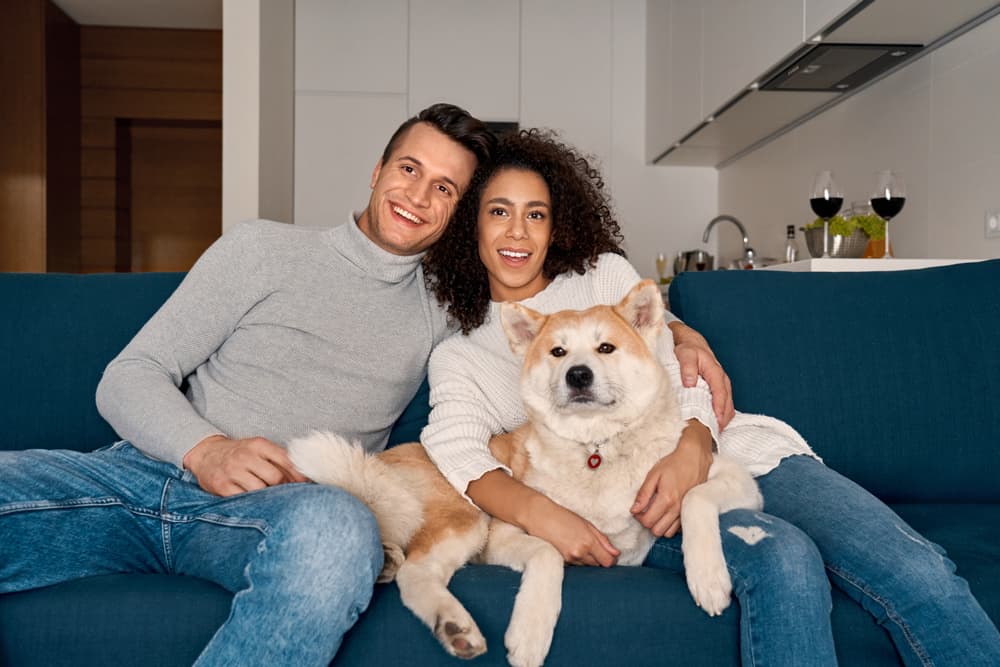 American Akita is a healthy and tough dog. But like every other dog, they may also suffer from health conditions, such as bloat which is a life-threatening condition, eye and thyroid disorders, and hip dysplasia. As an owner, it is important that you check with your veterinarian regularly if your dog has developed any of these ailments.