When people hear about bull-type terrier breeds, they may perceive them as aggressive, uncontrollable, and fighting dogs. One of them is the American Staffordshire Terrier or AmStaff for short. A dog with an undeserved reputation, AmStaffs are loving companions that make excellent protectors if trained well.

Bred to be fighting dogs, the American Staffordshire Terrier, along with Bulldog and Bull Terriers were popular in dogfighting rings during the 18th and 19th centuries. Although these blood sports have long since been banned, these fighting dogs left a reputation to be aggressive which led to their prohibition in some countries.

AmStaffs’ ancestry is said to be the muscular and intimidating jaws of old-style Bulldogs combined with the brave terriers which resulted in bull-type terrier breeds.

The AmStaffs that we know today are calmer and more mellow than the original breed. Now, they make a great addition to a family who knows how to care for them.

AmStaffs have a short, stiff, and glossy coat that comes in a variety of shades, including black, blue, fawn, red, and white. They can be a mix of white and other shades, although AKC considers it a fault if 80% if the coat is white.

The AmStaff’s head is large, and the black, round eyes are set apart from each other. It moves in a sophisticated motion, with a bouncy gait that shows the breed’s confidence. 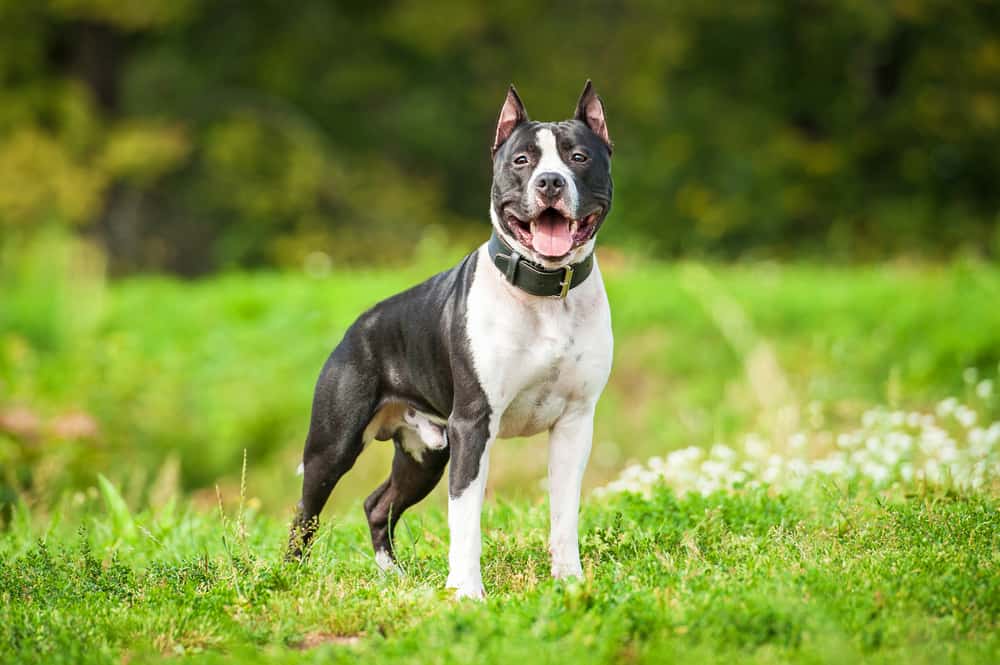 Male American Staffordshire Terriers are a bit larger than females, with the height ranging from 17 to 19 inches. Meanwhile, females stand at 16 to 18 inches. AmStaffs weight varies from 40 to 60 pounds, but some can weigh more or less than the average. 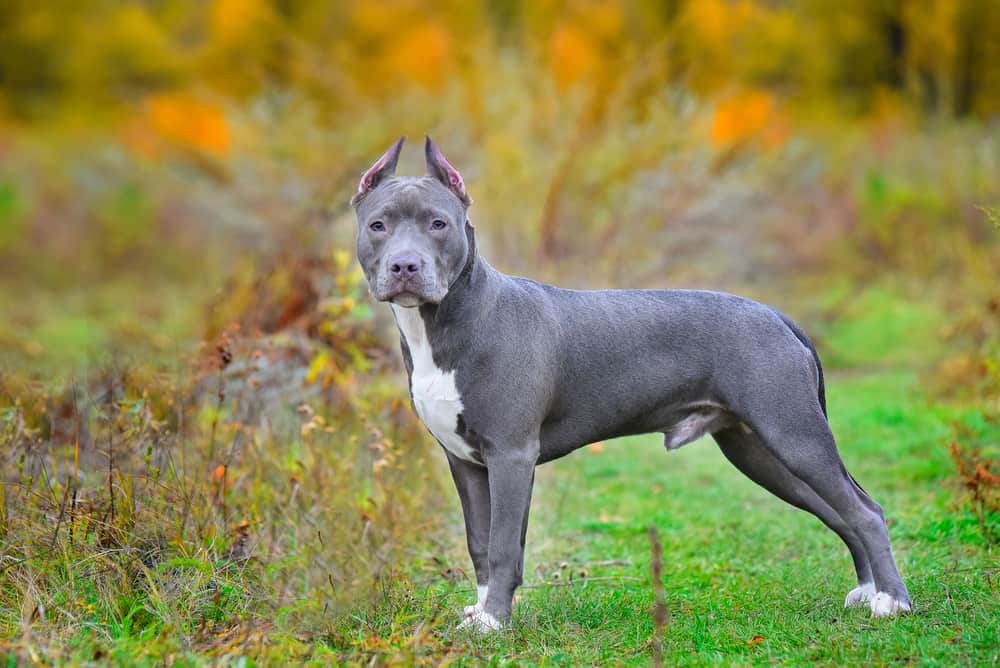 With proper care, AmStaffs can live from 12 up to 16 years. To extend their lives, it is important to regularly check them with your veterinarian. Aside from their health condition, it is also essential to keep them physically and mentally satisfied.

AmStaffs sheds heavily twice a year every time the seasons change and sheds minimally throughout the rest of the year. However, grooming them is relatively easy. Weekly brushing is enough to keep their coat shiny and clean. Brushing also helps the skin oils to be distributed all over the coat.

Unless the dog gets really dirty or develops a “doggy” smell, bathing should only be done when necessary.

Aside from shedding, they also tend to develop bad breaths. Brushing their teeth at least once per week is essential to prevent germs from forming.

AmStaffs have a strong, sturdy build known to be with great strength for their size. They are alert, vigilant dogs that are capable of protecting you and your family from intruders, even with just their intimidating look.

However, they also make great family companions. They are caring, affectionate dogs and are happiest when around their human family – whether it’s playing with you, walking at the park, or simply snuggling on the couch.

Keep in mind that this breed loves to chew and dig on the ground, so it is important to train them at an early age. It is also important that they are socialized early to avoid their snob and reserved personality towards other animals. 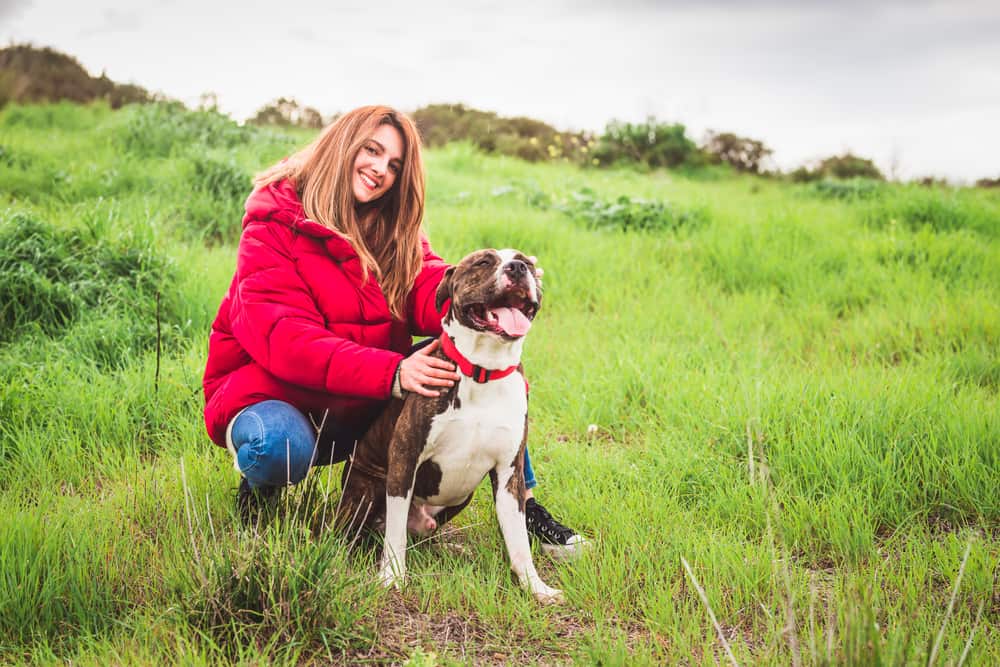 AmStaffs are smart dogs. They love to please their owners, making them a highly trainable breed. But, being intelligent means that they also need mental stimulation. If not given, they may get bored which will result in chewing or excessive barking. 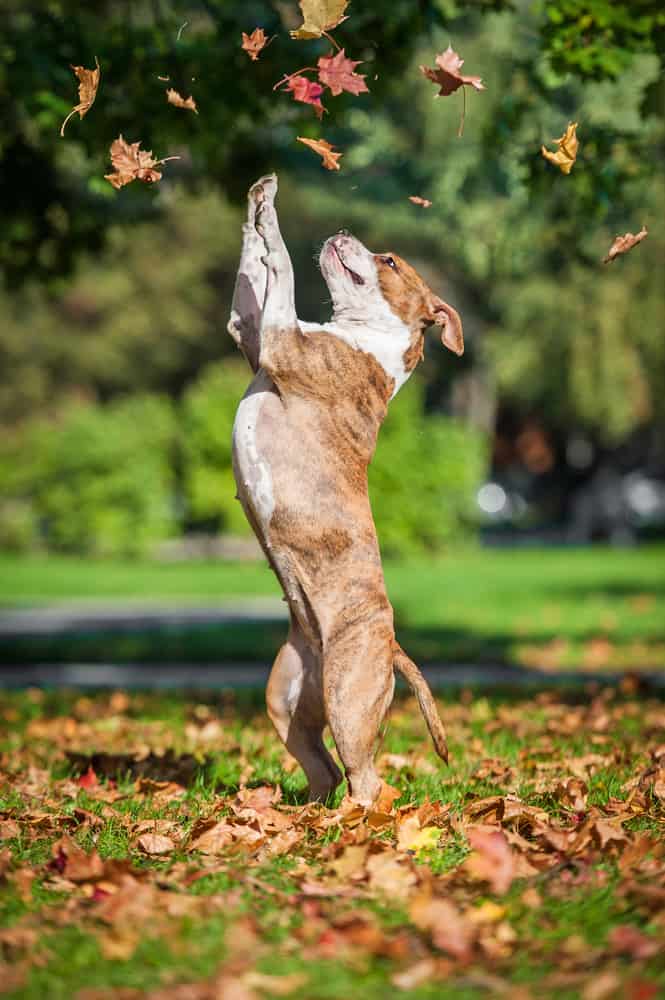 AmStaffs enjoys having a job to do. They are intelligent, muscular, and athletic dogs. They love to participate in canine sports, such as agility, obedience, and dock diving. When properly trained, they also excel in police works such as search and rescue operations! 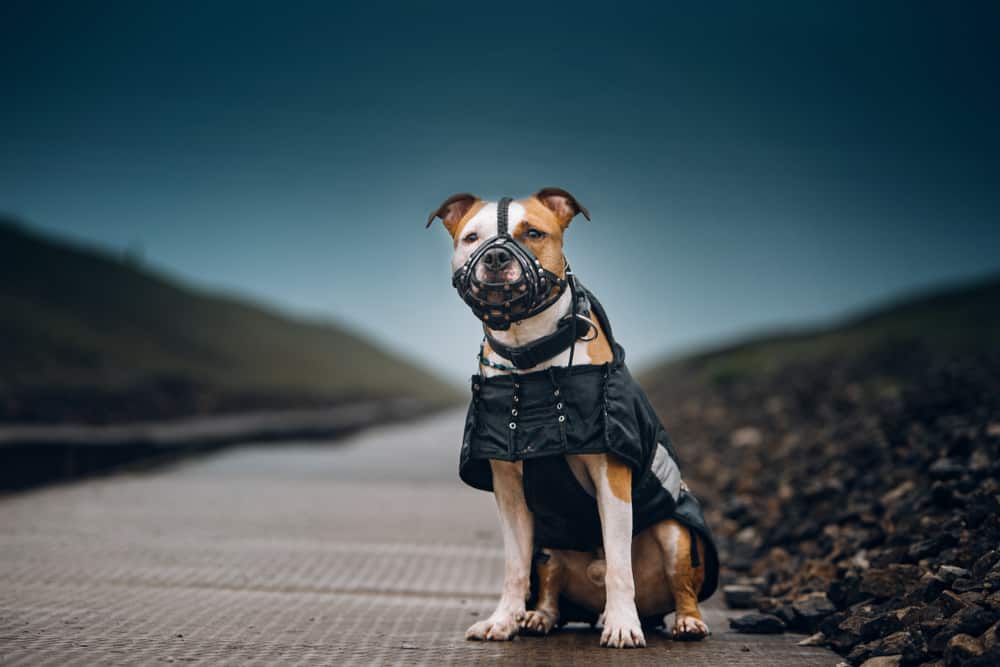 AmStaff is a dog with high energy levels, which means they require a lot of physical exercises aside from mental stimulation. They enjoy playing with you or just simply running around. AmStaffs thrive in a yard with a secured fence where they can release their adequate amount of energy. 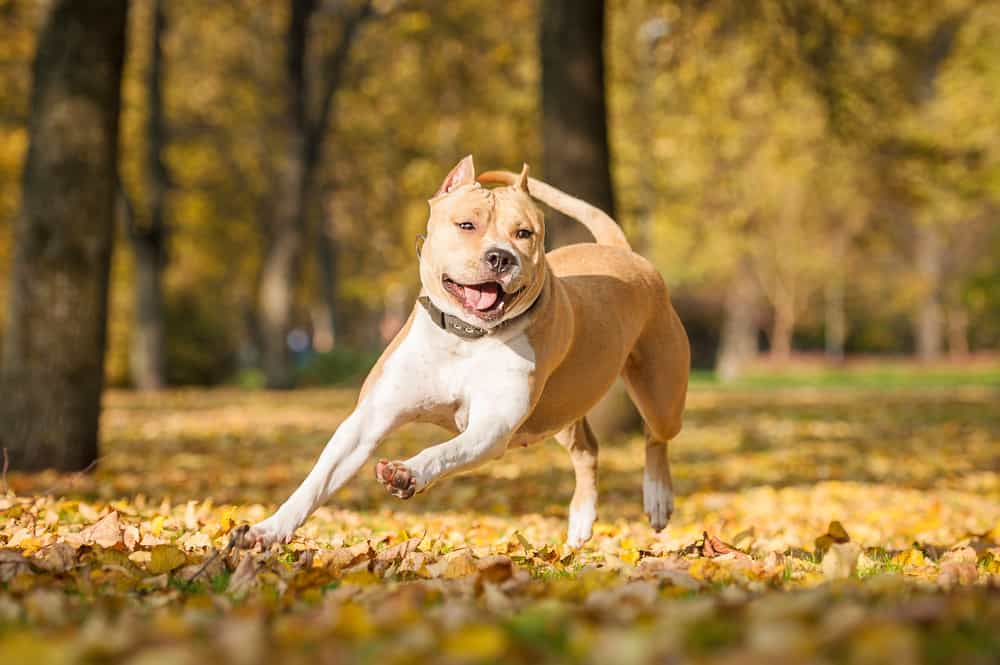 AmStaffs are easy to train dogs. They are smart and are happy to please their owners. Given their strong physical strength, AmStaff needs early socialization and puppy training classes to grow as a well-rounded dog.

They like physical and mental challenges. They can develop behaviors such as chewing and digging, so it is important that they are trained properly. Because they can go their own ways, AmStaffs need a firm and confident owner that knows how to set boundaries.

As will all dogs, positive reinforcement techniques shall be used when training any dog. Using harsh techniques will not do any good for both you and your dog, so don’t ever resort to that technique. 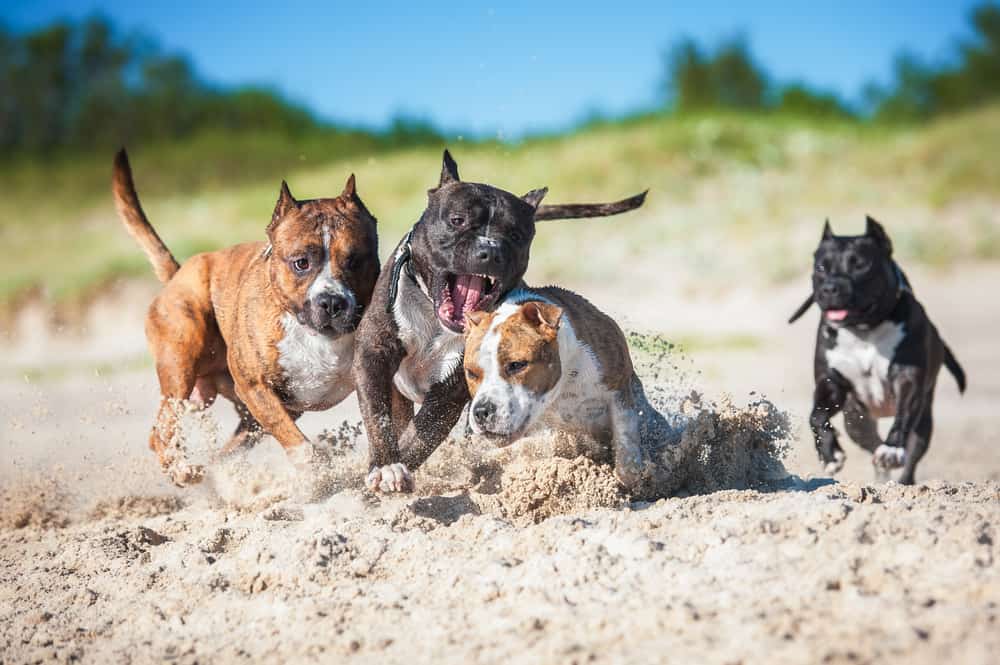 We may have heard somewhere that AmStaffs are aggressive dogs, but that’s the total opposite when it comes to their family. AmStaffs are loving, playful, and devoted dogs who want nothing more but to spend time with their loved ones. They are aggressive only when needed, such as when protecting their family from something they perceive as a threat.

Nevertheless, their muscular built and presence is enough to keep intruders out of your house.

AmStaffs are best suited at homes with older children who know how to safely play with dogs since they are powerful and may accidentally knock over smaller kids.

AmStaffs are best suited to one-pet households. Keep in mind that they were originally bred to fight. Although breeders worked to eliminate this behavior, they can still be aloof towards other pets in the house. They may also perceive cats and other animals as prey.

To lessen this tendency, early socialization is a must. 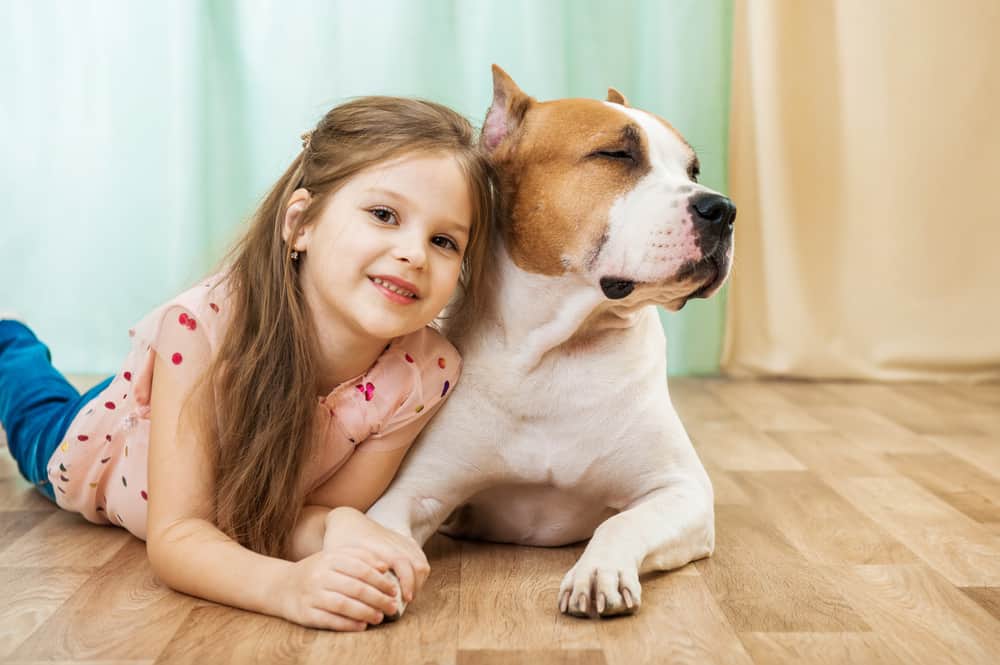 AmStaffs can adapt well to apartments, so long as their physical exercise and mental stimulation needs are met. If not, they may chew and destroy your furniture out of boredom.

However, a properly trained AmStaff is obedient, calm, affectionate, and only aggressive when it needs to protect you or a family member.

They can be active indoors but are also willing to lay down with you on the sofa. 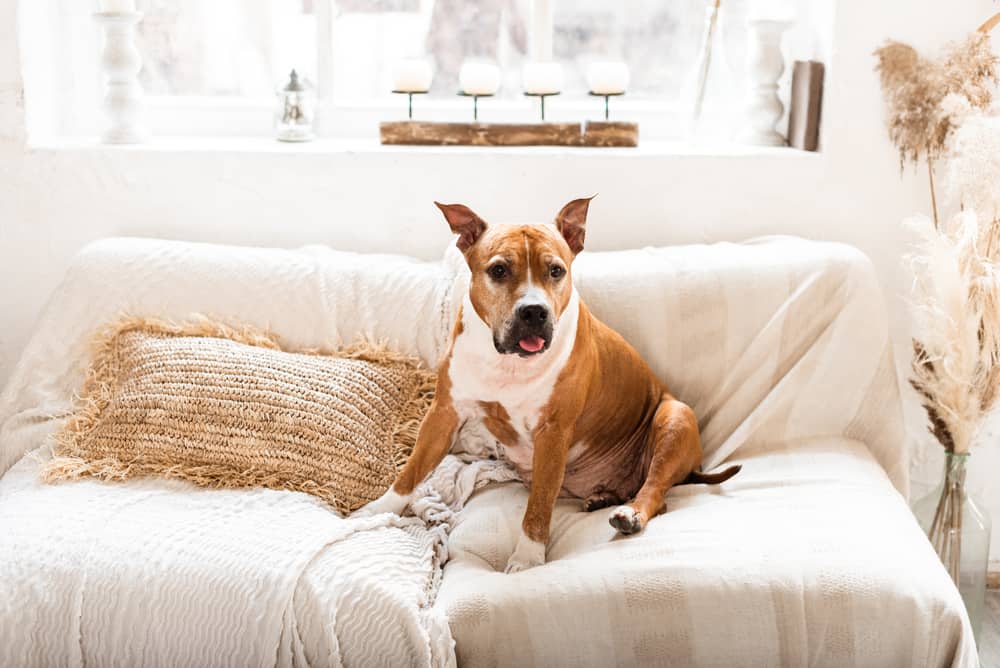 AmStaffs love to be with their family. They can be left alone for short periods, but not too long, or else they may develop restlessness, which further turns into separation anxiety. Setting up a routine and keeping them busy while you’re gone may help prevent nervousness while they’re alone.

Generally speaking, AmStaffs are a healthy breed, but they may be prone to some health problems, such as skin allergies, urinary tract infections, cardiac disease, hip and elbow dysplasia, and autoimmune diseases.

Later in life, AmStaffs may tend to suffer from osteoarthritis or spondylosis. They may also develop hypothyroidism, demodectic mange, cerebellar ataxia, heart disease, and luxating patella. 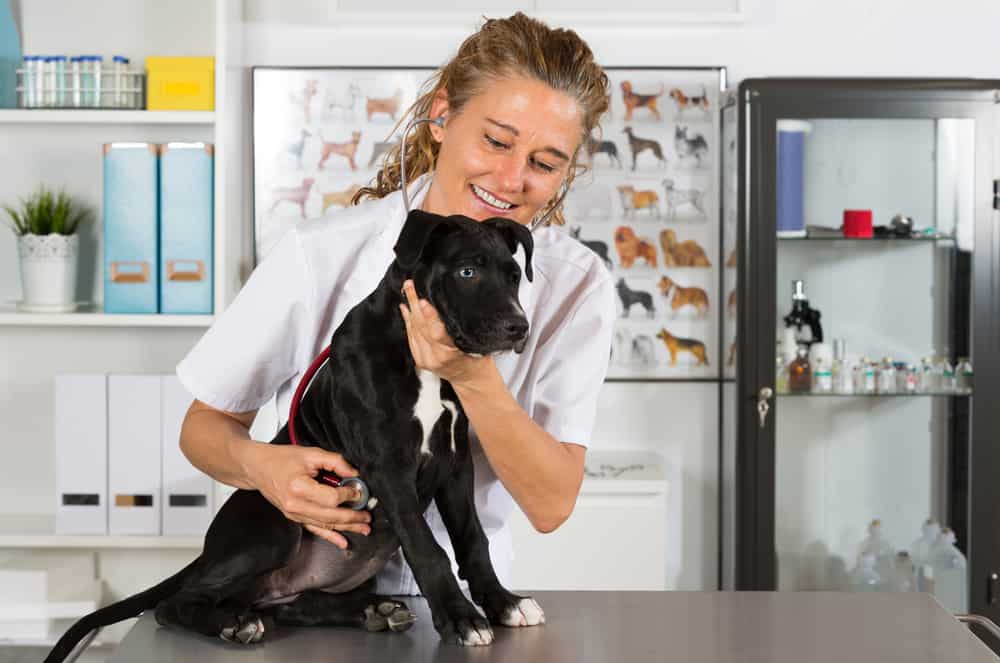