A dog that can protect you, play with your kids, as well as do well in canine careers and sports, then you might want to watch until the end of this video. Today, we’ll talk about the powerful, fearless, yet gentle dog – the Doberman Pinscher.

Dobermann Pinscher, also known as Doberman or Dobie in some countries, is a working dog developed by a tax collector named Karl Friedrick Louis Dobermann in Apolda, Germany in 1890. Because of his dangerous job of collecting money, and him being the town dogcatcher as well, Louis decided to take a dog with him for protection.

Although there were no records about their true origin, it is said that Dobies are a mixture of Rottweiler, German Pinscher, and Black and Tan Terrier. In 1900, the German Kennel Club officially recognized the Doberman Pinscher as a breed.

In 1908, the breed was greatly welcomed in the United States. It became quickly popular that in 1921, the Dobermann Pinscher Club of America was formed.

The more Dobies are bred, the gentler they become. Today, they are known for police works, but they also make the best family companion and protectors.

The Dobermann Pinscher has a smooth, short, sleek coat, and may have a bit of undercoat around its neck. Its color may be black, red, blue, or fawn with markings on the face, body, and tail that’s in the shade of rust.

Dobies are elegant-looking dogs. They have long heads, and shiny, muscular bodies. Their ears are cropped to enhance their ability to hear sounds, and the tail is docked short to give them a more elegant look.

Originally, Dobies’ ears were cropped to increase their ability to locate sounds, and tail docking gave the breed a more sleek look.

Because of their short coat, Dobies does not do well in winter, so a fireplace or a heating system is essential especially if you live in a place with cold weather. 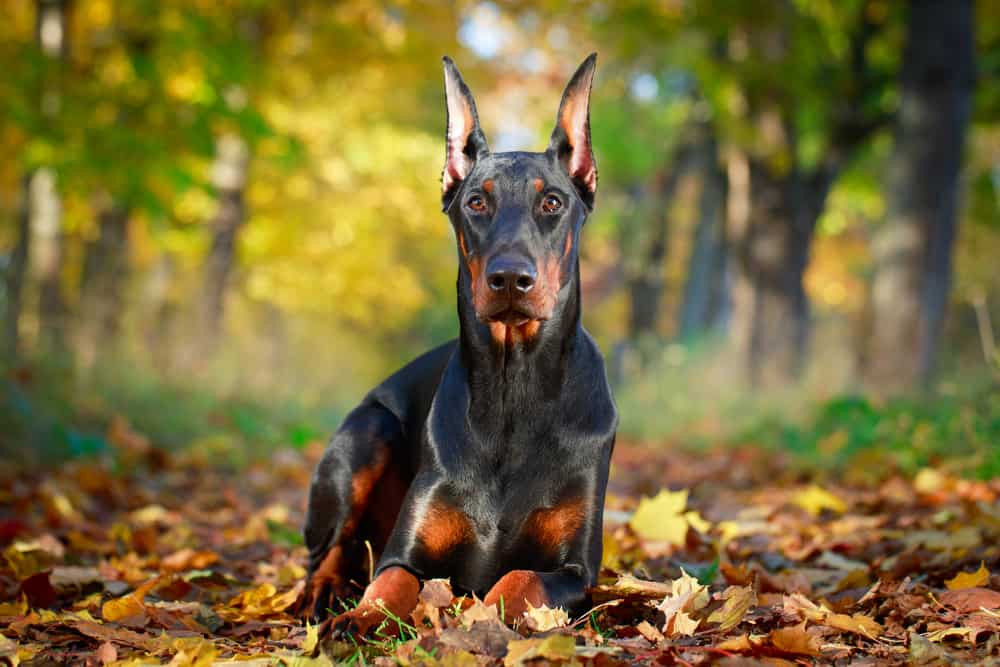 Males are usually bigger than females, with a height ranging between 26 to 28 inches and weight around 70 pounds. Females, on the other hand, stand between 24 to 26 inches and their weight usually ranges between 60 to 65 pounds. 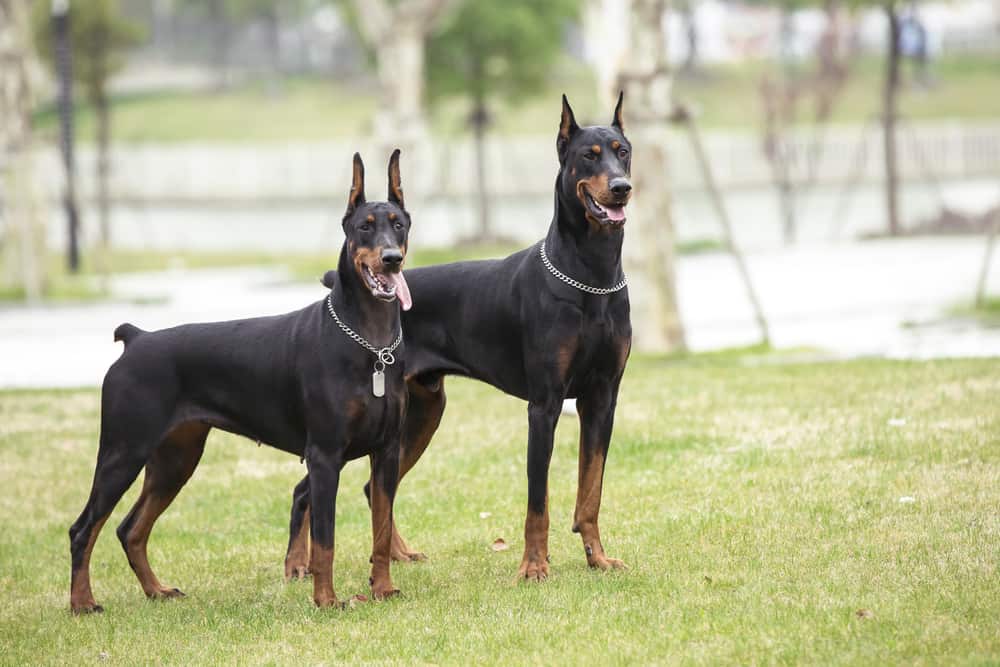 On average, Dobermann Pinscher lives about 10 to 13 years. However, this breed may be prone to genetic disorders, so it is extremely important to give him his regular check-up to address any ailments or conditions before it gets too late.

The Dobermann Pinscher is a low-maintenance dog. While its short coat still sheds, this dog only requires minimal grooming. A quick daily brushing or a weekly thorough brushing with a grooming mitt is essential to keep its coat sleek and in the best condition. Bathing should only be done when necessary, such as when he plays in the mud, or his coat is stuck on something smelly.

Dobermann Pinschers are perceived as aggressive, fierce, and dangerous dogs. Sure, you may be intimidated just by looking at them, but they are actually gentle, yet attentive dogs.

Physically, they are muscular yet graceful – they had to be because they are bred to be large, intimidating, and willing to protect its owner from dangers. They are active dogs and they enjoy playing, so as an owner, it is important to keep up with their physical needs.

Dobies are also intelligent, extremely devoted, and trustworthy dog. They are natural protectors and are fearless when they perceive danger or threat. They are not aggressive unless given a reason to be one.

Overall, this breed’s personality makes it a great pet and family companion who is capable of protecting you, as well as being able to play gently with your family.

Dobermann Pinschers are mostly used as service dogs not only because of their intimidating looks but also because of their high intelligence which makes them relatively easy to train. In fact, they ranked 5th in the smartest dog breeds!

Their intelligence can be compared with other smart breeds, such as Poodle, Golden Retriever, and German Shepherds, making them one of the most trainable dog breeds! 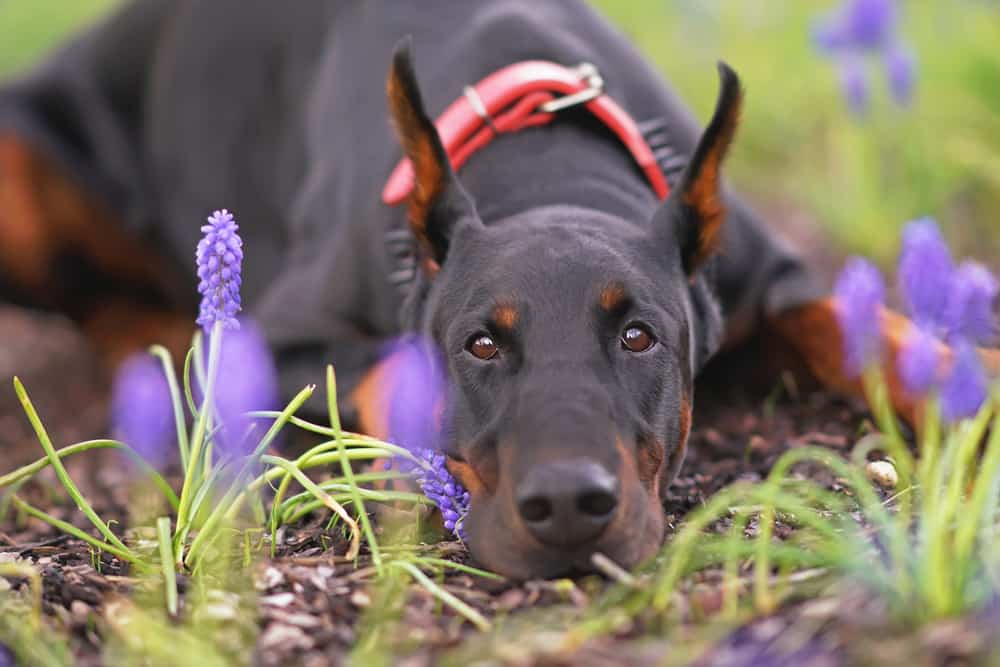 Because of their fit and sturdy built, Dobermann Pinschers are perfect as agility competitors. If you love to participate in canine sports, such as obedience, tracking, and agility, then this breed is for you.

They are considered working dogs and are happiest when given a task to do. Because of their ferocious looks, they are ideal companions for police and military works, as well as personal defense. 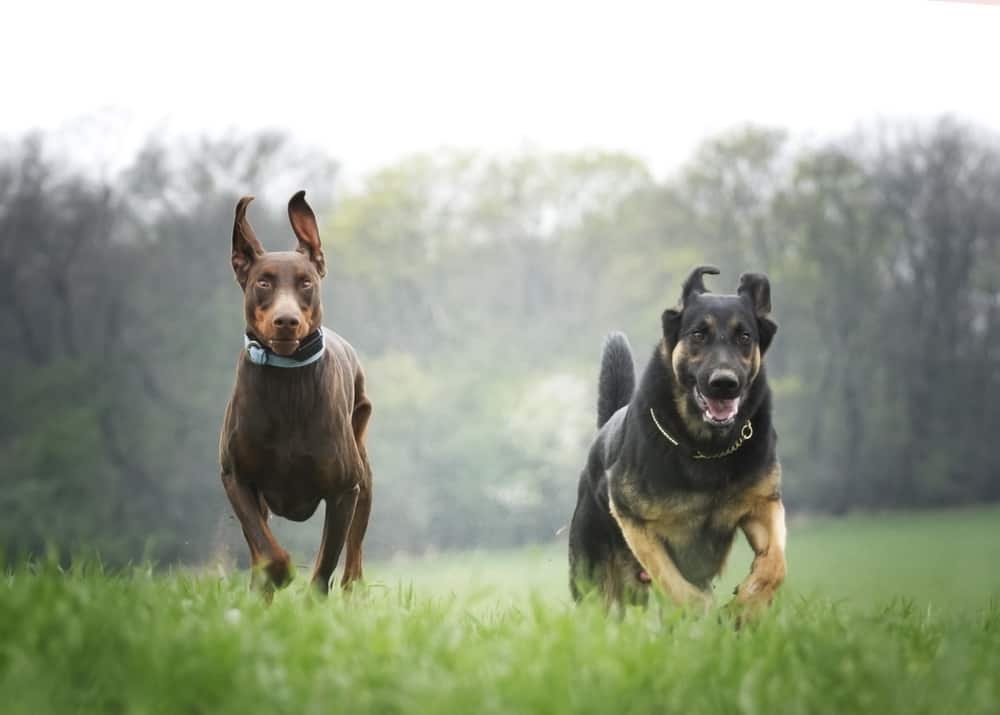 The Dobermann Pinscher needs a lot of exercises, which means this breed is not for everyone. Because of their athletic nature, Dobies are a perfect companion for adventurous activities such as trekking, hiking, or mountain climbing.

It is also essential to have a home with a large, fenced area if you want to keep this dog. They need a place to run to release their energies. If you are interested, training them for canine sports can also be a fun way to bond with your dog, as well as keep him healthy and happy.

Aside from physical exercise, Dobies also need a lot of mental challenges that will keep them busy all day. Training and puzzle games are a good way to stimulate their mind. 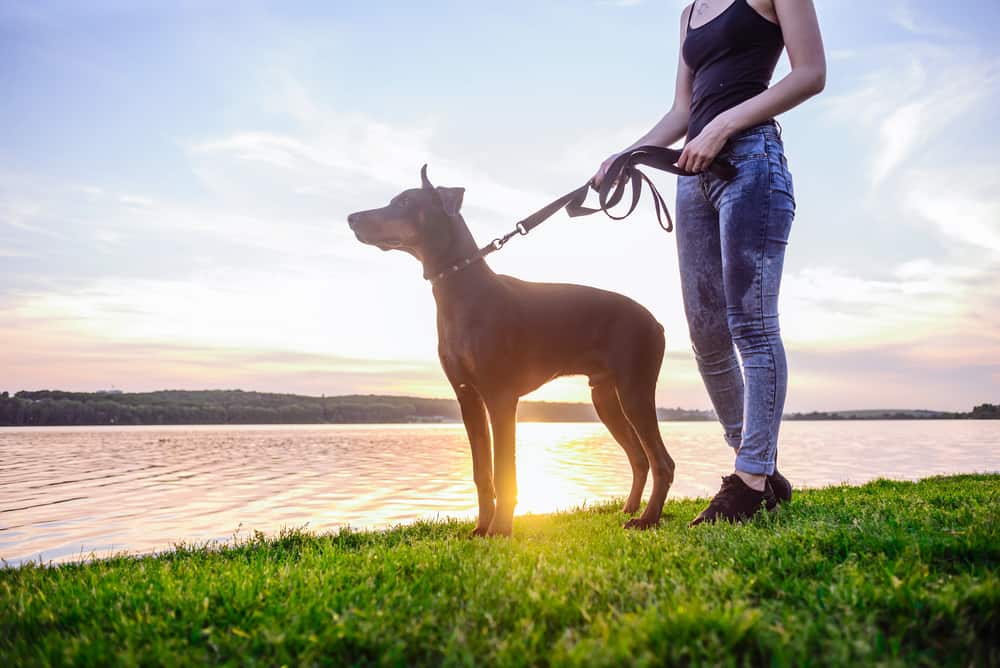 Dobermann Pinschers are smart dogs. They learn quickly and respond well to training. Because they are fast learners, they need an owner who keeps training fun, engaging, and interesting. If not trained properly, they can be unmanageable and have their own decision about things, so obedience training is a must for this breed.

Early socialization also greatly helps Dobies grow into a well-rounded dog. Exposing them to different situations, people, animals during their puppyhood will keep them calm and collected whenever they meet unfamiliar faces, although this does not mean that their responsibility to protect you is gone. 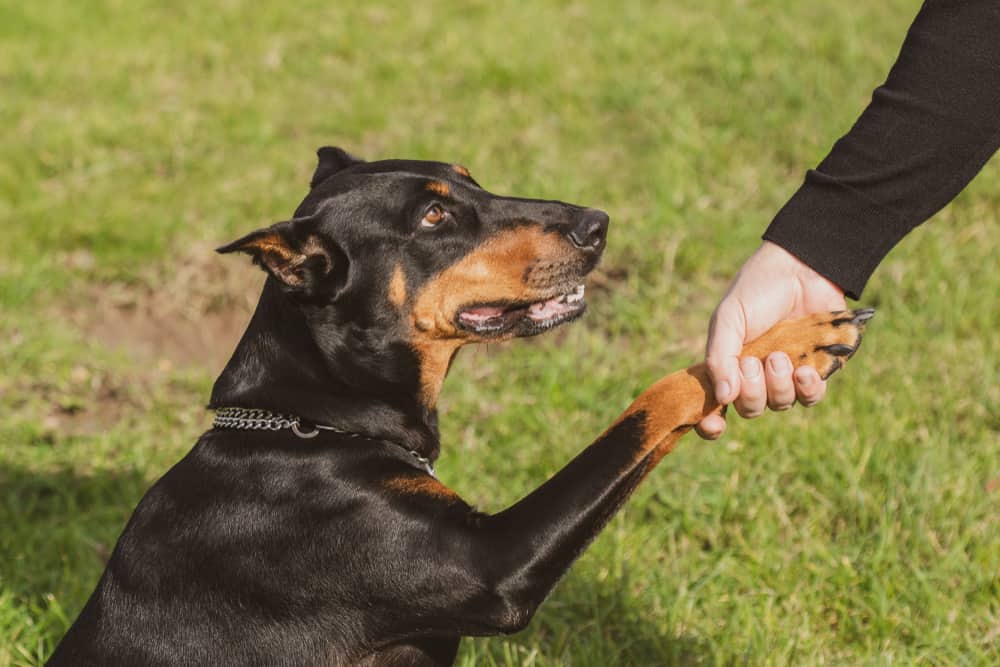 Over the years, Dobermann Pinschers’ aggression gradually lessened. Now, they love to be a companion and enjoy being part of a human family. They are trustworthy and devoted to their family, making them excellent natural protectors. Dobies love to be with people they adore and are willing to protect them at all costs.

They are also friendly with children and other pets in the house, provided that they are trained and socialized during their early years. However, they can be aloof to strangers if they consider them as a threat to their loved ones. Don’t worry, they won’t be aggressive without a reason. 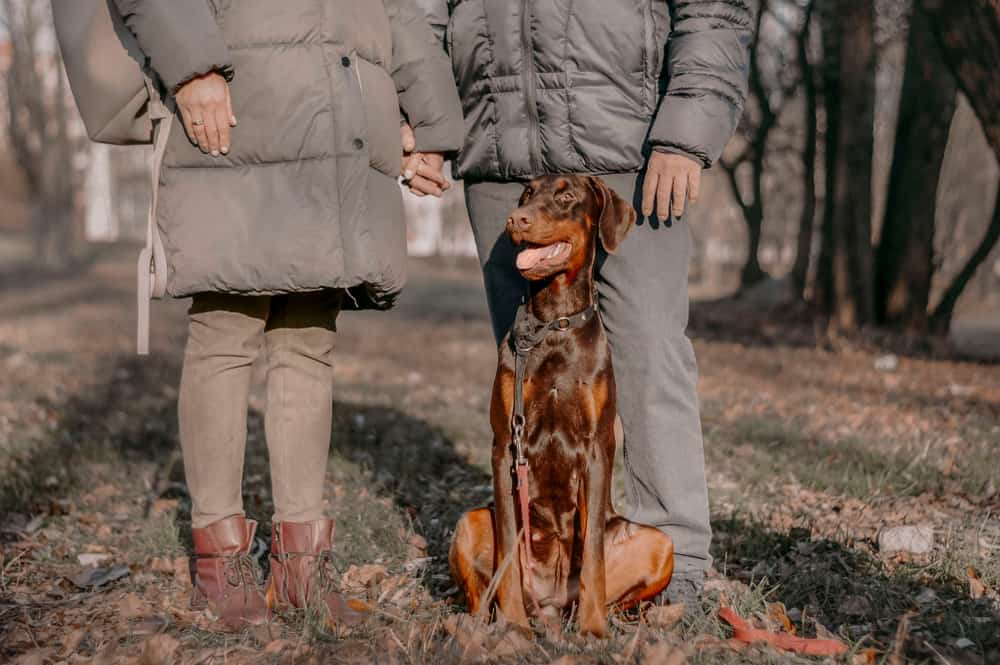 Dobermann Pinschers can live in both suburban and countryside, as long as they have an area to run. That being said, they are not for apartments with little to no space to exercise. Also, keep in mind that they are big dogs. A yard with secured fences will keep your Dobie and other people and animals safe from each other, so make sure to have that if you decide to keep this dog.

Dobies thrive around their family, which means that they should be kept indoors.

Like every other dog, Dobermann Pinschers should not be left alone for long periods. They also shouldn’t be kept in a chain, or be anywhere away from their family. If not properly taken care of, they may suffer from separation anxiety and may further develop destructive behaviors.

In general, the Dobermann Pinscher is considered a healthy breed, although there are ailments and health conditions it may be prone to, such as bloating which is a life-threatening digestive condition if not addressed early. They may also suffer from hip dysplasia, dilated cardiomyopathy or enlarged heart, von Willebrand’s disease which is a clotting disorder, progressive retinal atrophy, albinism, and hypothyroidism. 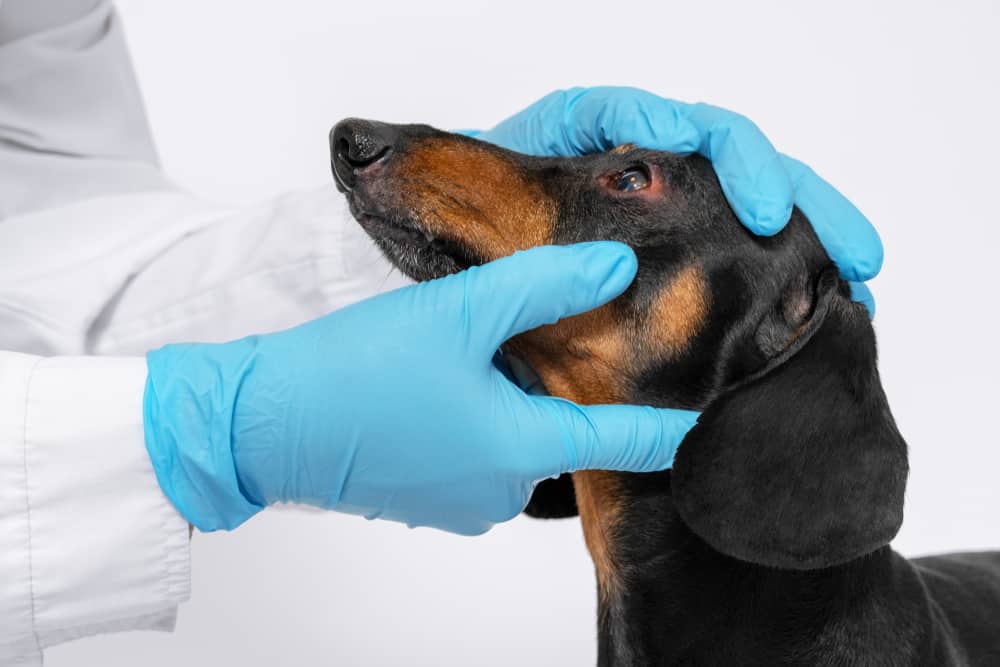