Intimidating and terrifying – that’s how most people describe this breed at a first look. But behind those wrinkly faces and glaring eyes is an affectionate, loving dog that is capable of protecting its family from potential dangers. Who am I talking about? It is the glorious and literally ancient breed, Neapolitan Mastiff.

The Neapolitan Mastiff, also called Neo or Mastino, is an old breed dating back to 3000 BCE which is the beginning of the Bronze Age. It is also the time when Upper and Lower Egypt were united and mastiff-type canines appeared in Tibet.

During the Roman Empire, Neos were used as war dogs, gladiators, and guardians because of their terrifying size that would scare off even the toughest enemy. Their ability to intimidate intruders hasn’t lost, since they still make the best guardian dogs up until today.

In 1946, a journalist by the name of Piere Scanziana discovered Neos at a Naples dog show and quickly got interested in the breed. He mainly contributed to the popularity of Neos. Just after three years, the breed was recognized by the Federation Cynologique Internationale. By the early 1970s, Neos were well-known in Europe.

In 1973, the first Neo was imported to the U.S by Jane Pampalone. In the same year, the Neapolitan Mastiff Club of America was founded. By the year 2004, the American Kennel Club officially recognized the breed.

The Neo’s body skin is thick and ample. It’s one inch coat is short, yet thick and is the same length on all its body parts. It’s face contains hefty wrinkles that stretch from the margin of its eyelids up to the skin under its throat and neck, which is called the “dewlap.”

Its coat comes in a variety of colors, such as black, mahogany, solid gray, tan brindle, or tawny. But if you want to join in dog shows with your Neo, take note that this breed that is born with a white spot on the head is considered disqualified in the show ring, nevertheless it won’t affect their personality and would still make an excellent companion. 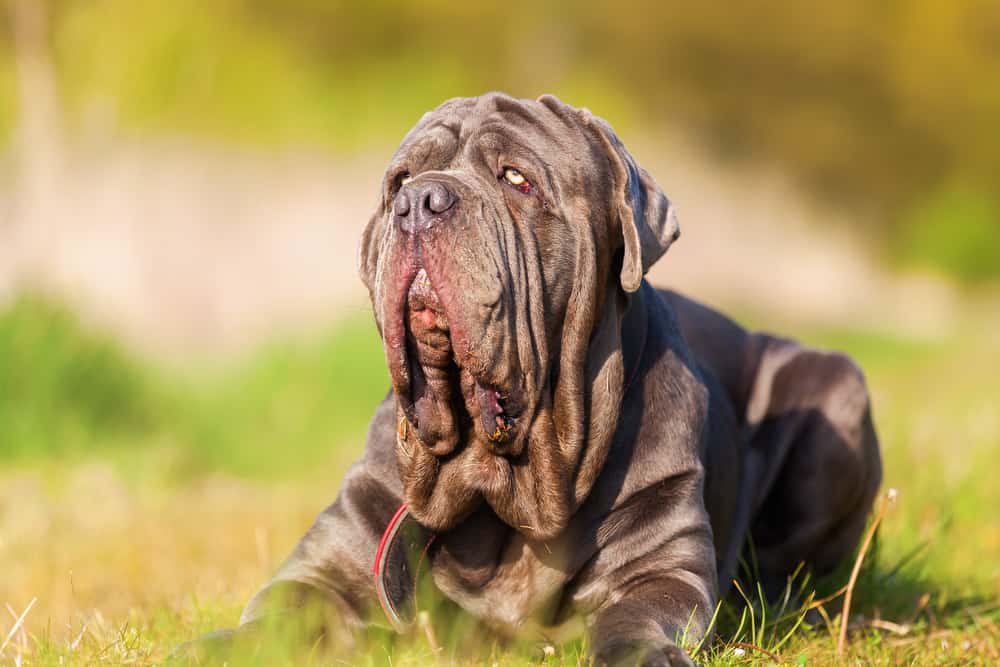 Neos are huge, powerful dogs with male’s height ranging from 26 to 31 inches, and weighing around 150 to 200 pounds. Meanwhile, females are smaller that stand between 24 to 29 inches, and weigh around 120 to 175 pounds.

Depending on their parent, some may be larger or smaller than the average size. 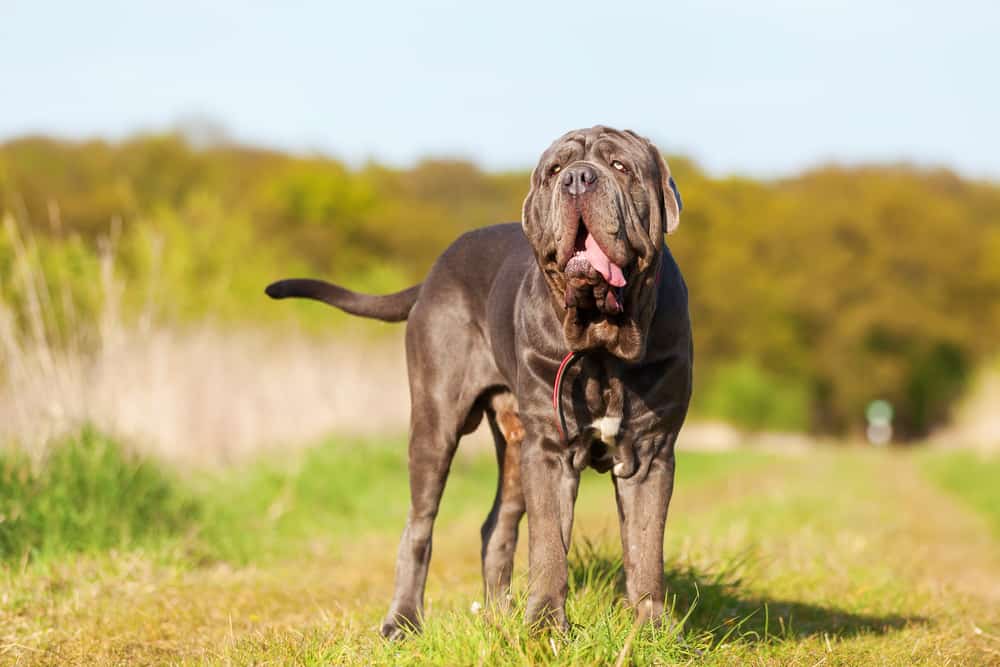 On average, large breeds have shorter life span compared to other smaller dog breeds. Neos can live up to 8 to 10 years. Some may live longer, depending on how he was taken care of by their owners.

Despite their short coats, Neos are average shedders and would need weekly brushing. Aside from that, their thick, wrinkly skin should always be kept clean and dry. Baths should only be done when necessary.

Neapolitan Mastiffs are known as gentle giants. Despite their large size and grumpy face, they make extremely affectionate, loving companions.

While they do not make fighting dogs, their intimidating size and unnerving stare are enough to keep intruders from entering your house. They are calm, loyal, but are ready to defend you at all cost when the need arises.

Neos love to be around its people so they’ll stick with you every time. However, due to their huge size, they may be clumsy and accidentally knock out things. Being unaware of how big they are, expect Neos to cuddle with you or stay on your lap as long as they want. 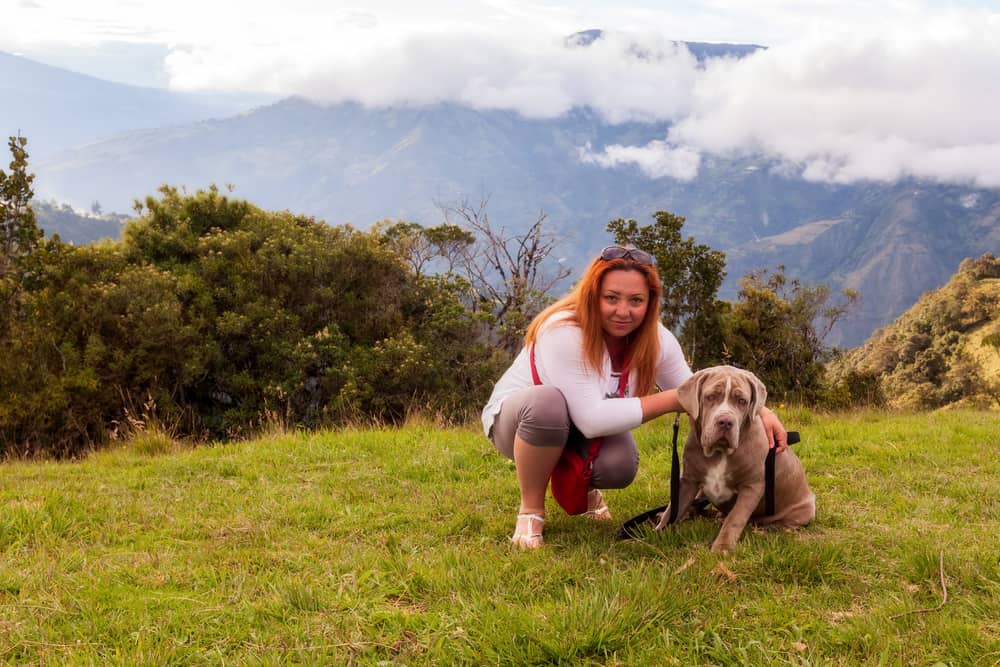 Neos are intelligent dogs, but they can also be lazy and stubborn. Once they feel boredom, they can be destructive at home. Make sure to give them enough mental stimulation to keep their minds busy, as well as regular exercises and frequent social interactions.

Due to their large size, Neopolitan Mastiffs do not make the best agile dogs. They can’t run and turn quickly as fast as other breeds since their joints can easily be fractured. They are not the best companion for hikes, long runs, and other vigorous activities. You may also keep an eye when you have a pool since Neos are heavily built and they cannot swim well.

Adult Neapolitan Mastiffs tends to be mellow and lazy, therefore they are at higher risk of becoming obese if they don’t get the exercise they need. However, excessive exercise are also bad for their health since they overheat easily, especially during warm weathers. It is important to schedule their walks early morning or at night, and plenty of water after the exercise, of course.

On the other hand, Neo puppies are energetic and may play more than he should, so it is equally important to set a time for his play sessions so as not to stress their bones and joints. Stairs are extremely hazardous for them as well, as their knees are still not fully developed and may easily be injured.

You may also avoid rough plays such as wrestling or tug-of-wars. Once they learned that they are much more powerful than you, they will no longer listen to you. 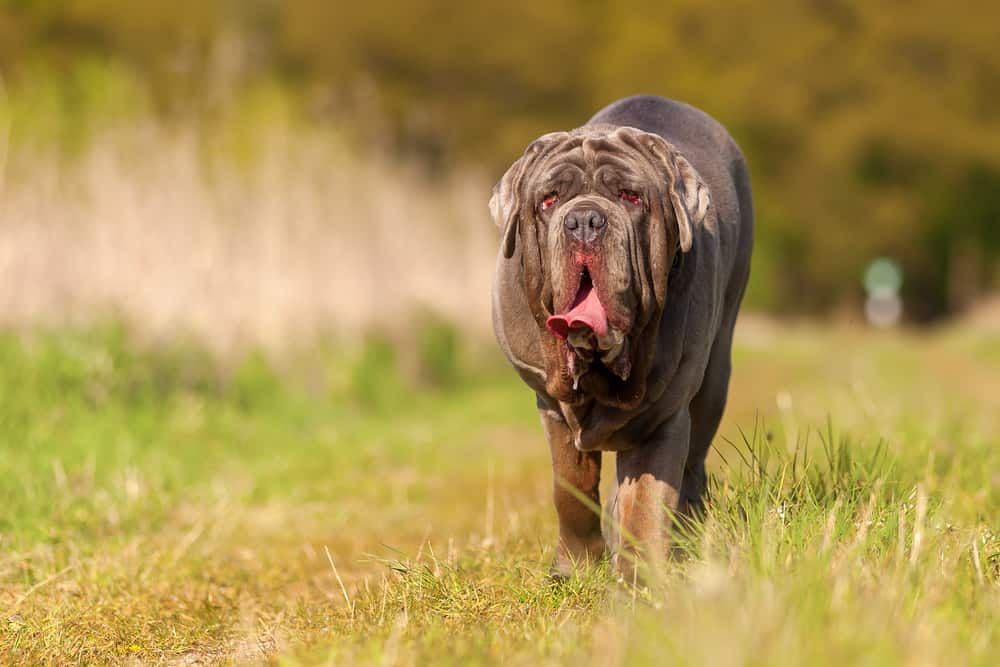 It is best to train Neos while they are still puppies since this is the time where they are most active and curious. They also tend to be stubborn as they get older. Between the ages of 3 and 4, Neos shows a calmer and laid-back attitude.

Because training might be a challenge, it is important for Neos to have a firm and consistent owner who will keep the training engaging and fun. As always, treating dogs with punishments is never an option. Instead, use positive and encouraging tactics such as treats and praises.

Patience and consistency is essential to successfully train this breed as they tend to be strong-willed. That being said, Neos are not suited for novie and timid owners. 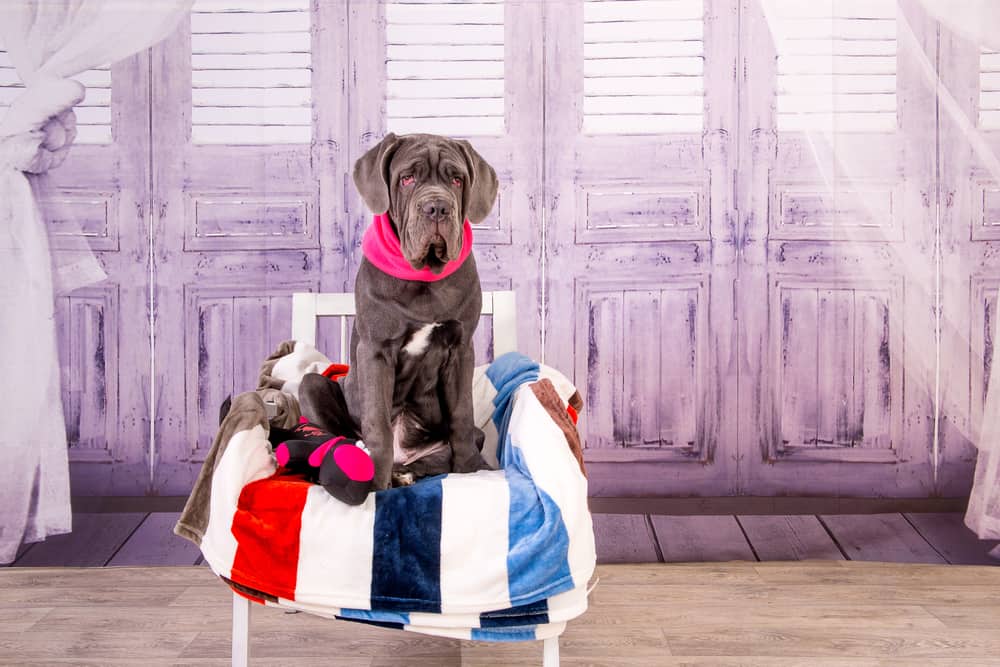 When you live with Neapolitan Mastiff, expect lots of drooling and farting. Keeping a small towel and an air freshener is recommended when you decide to own this dog.

Nevertheless, they make the best companion for your family and will make an excellent pillow or backrest for older children. However, due to their big size, they are not suited for homes with toddlers since they may accidentally knock them over.

If properly taken care of, Neos make a great addition to your home. They are loving, and are capable to guard you and your family. While they may look calm and relaxed, they are always alert and would bark at strange noises. Neos may be aloof and reserved with strangers that you welcome into your home.

Neos are not suited for apartment dwellers. Although adults are calmer, they still need a space where they can stretch and slump their massive body without breaking anything.
They would also need a fenced yard to roam around, play, and determine the limits of their property. Keep in mind that Neos love to be around their family, which means they must be kept indoors. 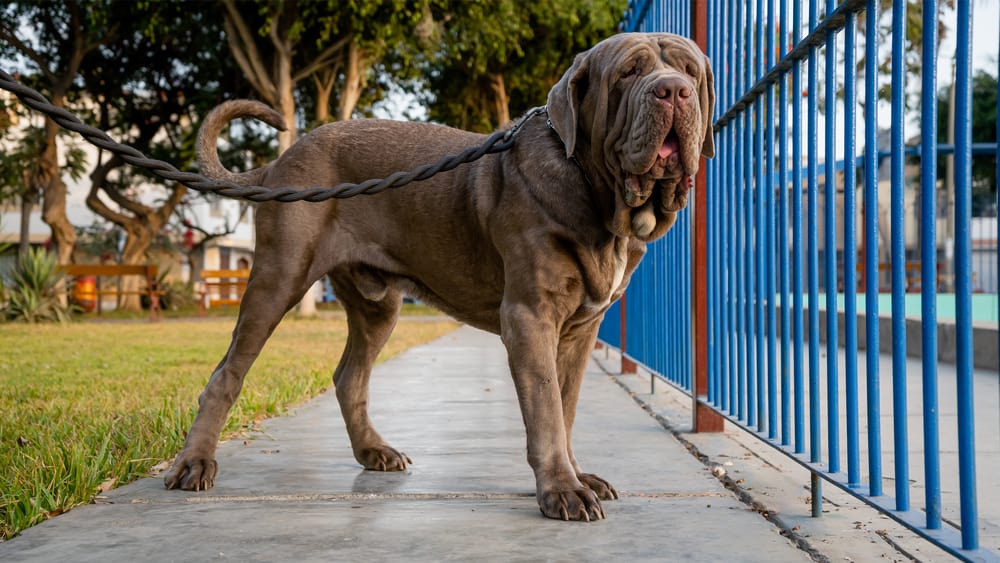 Neapolitan Mastiffs may develop separation anxiety if suddenly left alone for long periods. They need your presence to keep them happy and healthy. If there are cases that you really need to leave them alone, make it short and make sure they have something to keep them busy, such as toys or the sound of talking people on TV. This would help them be preoccupied while you’re away. 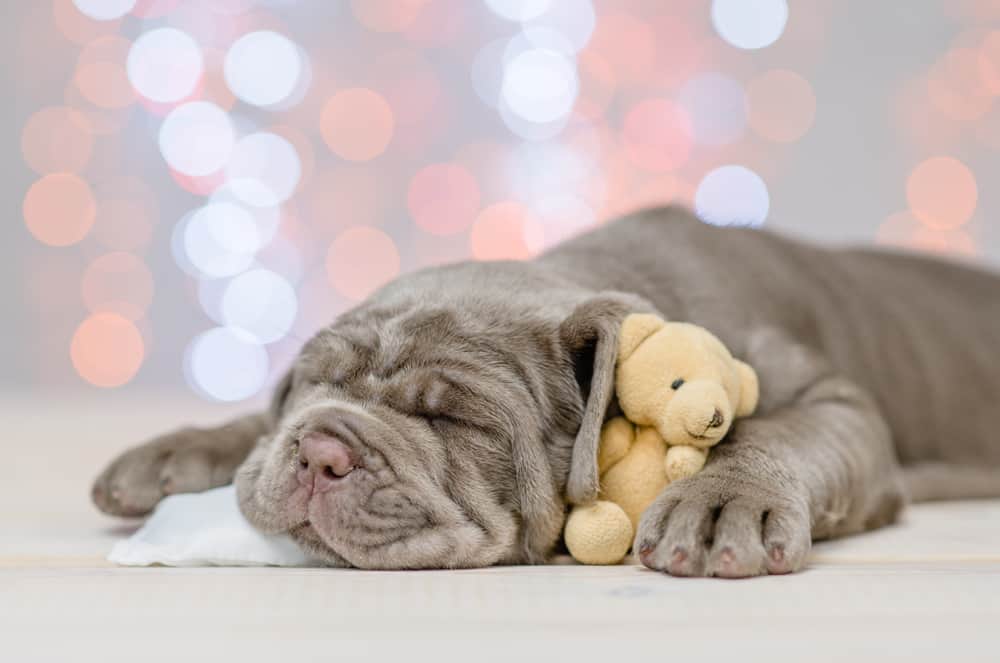 Neos are generally strong, healthy dogs. Despite their wrinkly and loose skin, they rarely have skin problems. However, they may suffer from some health conditions, which are “cherry eye” or the inflammation of the tissue in the corner of the eye, bloat which is a sudden and life-threatening condition, hip and elbow dysplasia, and cardiomyopathy.

As mentioned, Neos also have habits of drooling, wheezing, grunting, snorting, and farting.