Sure, you’ve finally decided to have a small-sized dog as your companion, but there are still lots of options to choose from. Which one would actually fit your lifestyle and personality? Do you want someone clingy and who will make you laugh all the time? If that’s the case, you may want to read this whole article because we’re going to talk about one of the most adorable, funny, and energetic dogs — the Rat Terrier.

A Rat Terrier is a small, yet tough, smooth-coated exterminator dog. This breed comes in two sizes: miniature and standard. They are happy-go-lucky, fun, playful, and cute companions. Having them around, boredom does not exist.

It is said that Rat Terrier got its name from Teddy Roosevelt. It is an American dog breed with a background as a farm dog and hunting companion. With its ability to catch vermin and small animals, Rat Terriers became the most popular dog type throughout family farms from the 1920s to the 1940s. However, the widespread use of chemical pesticides resulted in a sharp decline in the breed from the 1950s onwards. In the late 1970s, the breed re-emerged, thanks to the handful of breeders who sustained the breed of Rat Terriers.

It was reported that one of the sports of owning them was making a competitive bet about whose dog could kill the most rats within a given time. One Terrier killed 2,501 rats in 7 hours. Impressive? Yes.

Today, Rat Terriers are intelligent and smart dogs that are kept as a family pet.

A Rat Terrier’s coat is short and smooth with dense, shiny fur. Its coat comes in a variety of colours including black tan with piebald spotting, chocolate, tan, blue, isabella (or pearl), white, red, lemon, or orange. Ticking, or intermittent spots can be seen on the white parts of the coat. Generally speaking, all Rat Terriers have white markings.

Its ear is usually erect, yet can also be tipped, or button, all of which contribute to its intelligent and watchful expression. Its tail is commonly docked to about 2-3 inches, but the bobtail gene is usually seen in Rat Terriers. 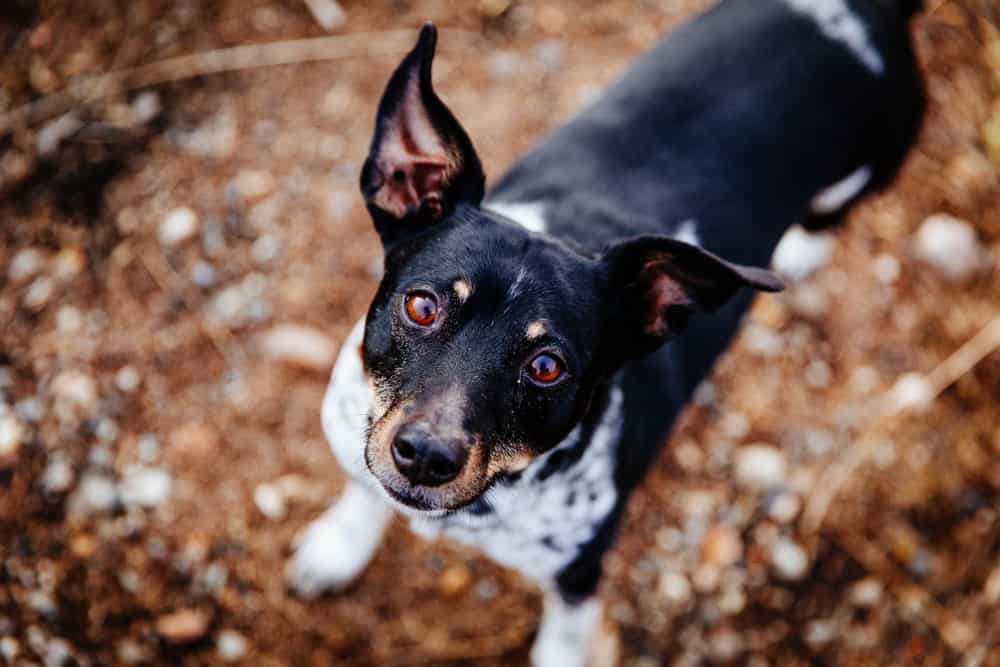 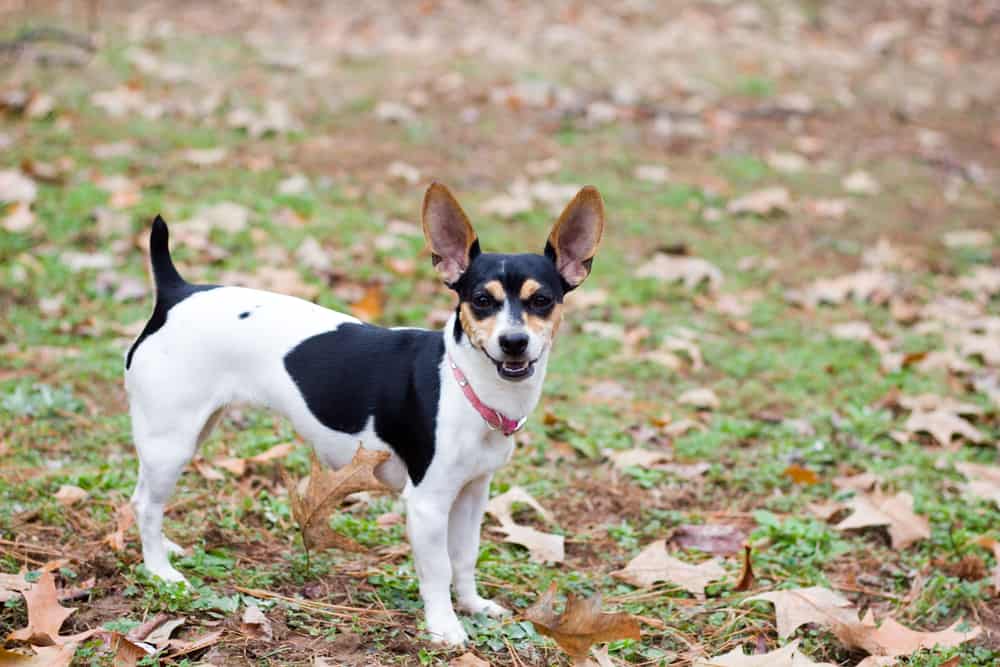 The average lifespan of a well-bred Rat Terrier is 16 to 19 years.

Since Rat Terriers have short, smooth, and dense coats, they require very little care to remain in good condition. They are low-maintenance dogs that only need weekly brushings with a soft brush to remove loose hair and keep their coat healthy and shiny.

Shedding is heavier in spring or fall, as well as after whelping or heat cycles. A bath every month is usually enough, depending on the Rat’s lifestyle. 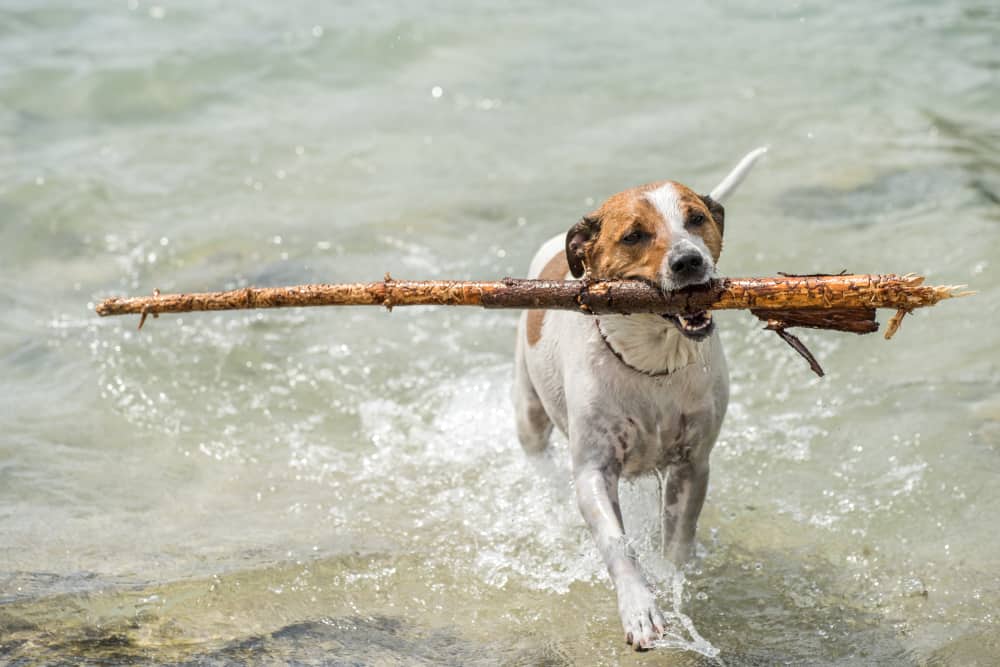 This breed is a dynamo. They are intelligent, wary, and stubborn all at the same time. Their social sensitivity makes them very trainable and easy to live with, yet it also means that extensive socialization is essential during their early stage.

Proper socialization includes exposing Rat Terrier puppies to various people, sights, sounds, and animals. Enrolling him in a puppy training class to socialize with other dogs is a great start. You may also want to invite visitors regularly or walk them too busy parks in order to develop their social skills. If he received the proper amount of training at a young age, he will grow as a loyal and respectful dog to his owner.

Rat Terriers are considered to be the calmest, soft tempered, and most adaptable of all Terriers, making them popular service dogs in hospice, treatment for depression, and other human-care jobs. 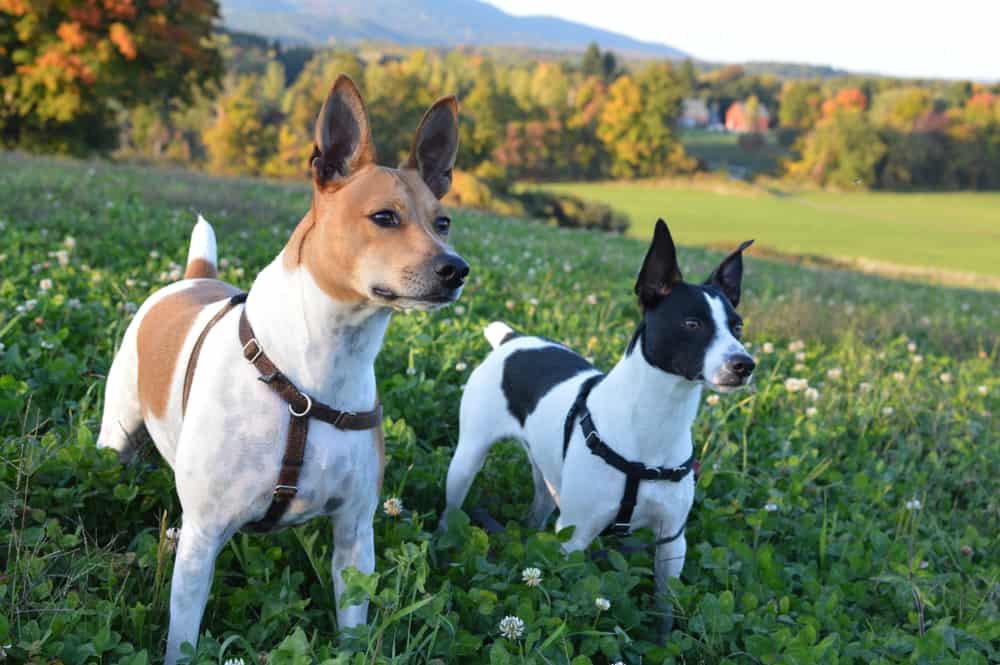 Rat Terriers are active and intelligent breeds. They tend to be happier when they receive mental stimulation aside from physical exercise. They also tend to be stubborn, making a way to get what they want.

Their intelligence is so sharp that police departments start to use them as search dogs since they shorten the training to as little as three weeks, which is much lesser than for common police service breeds. Plus, their small size allows them to search tight and small spaces that a traditional police service breed won’t reach. 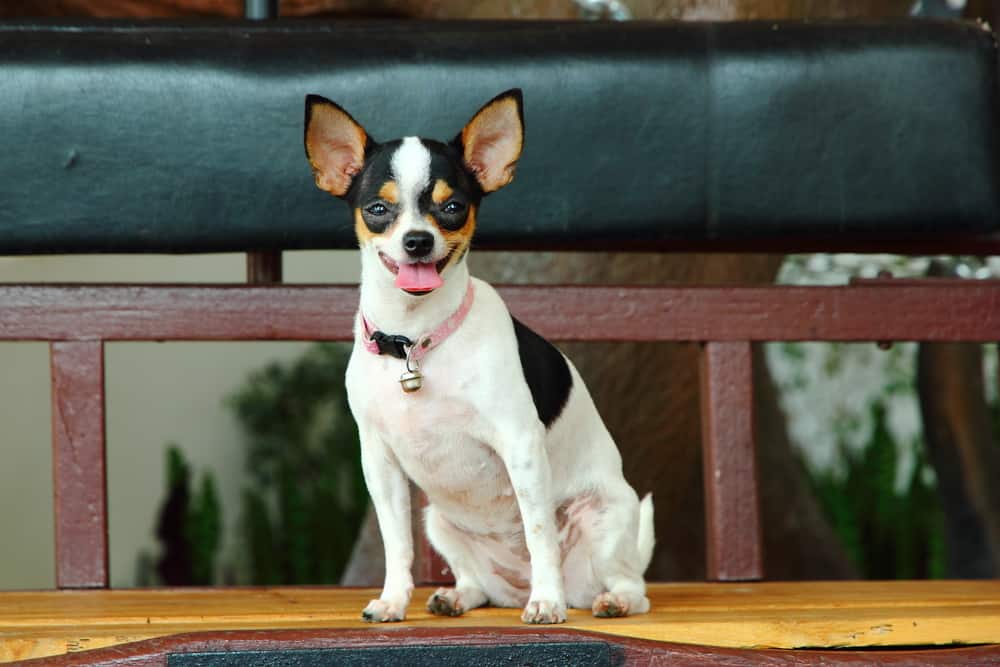 Rat Terriers are bred for speed. In history, they are most commonly used as farm dogs since their speed is fast enough to catch rats, squirrels, and other small vermin. 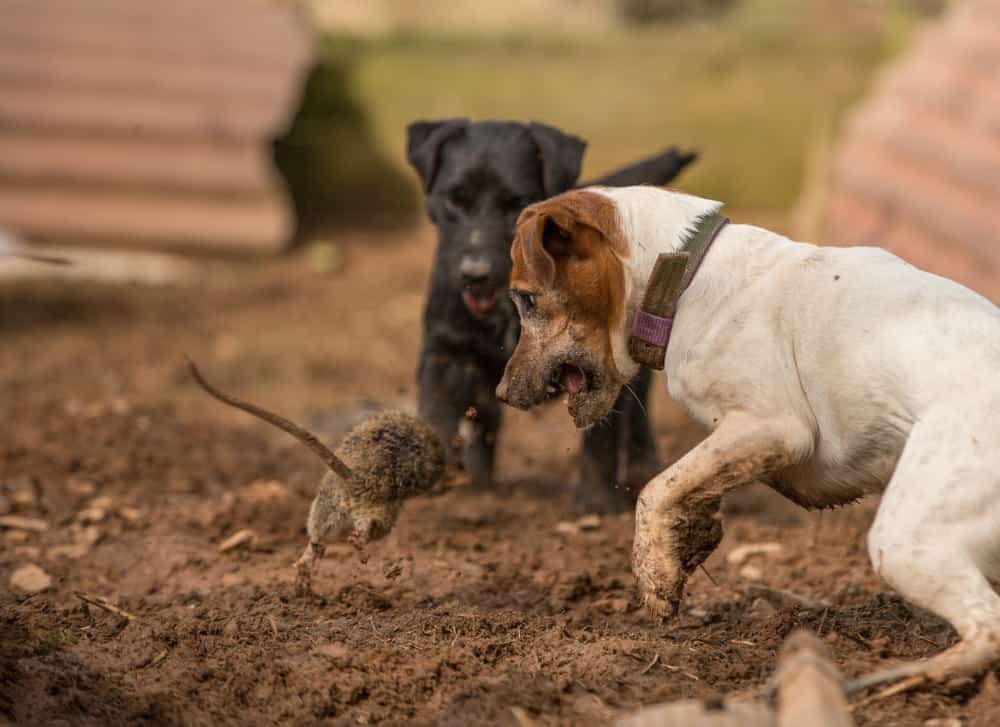 Rat Terriers are highly-energetic dogs, which means that they need to move regularly, or else they’ll become destructive as an outlet to expel their pent-up energy.

For this dog breed, sufficient exercise means indoor playtime, a daily 40-minute walk at the park, or chasing games in a fenced space. They tend to get along with other dogs their size or larger, as well.

Aside from physical exercise, they need mental stimulation, too. If they did not receive it, they may resort to barking or chewing. 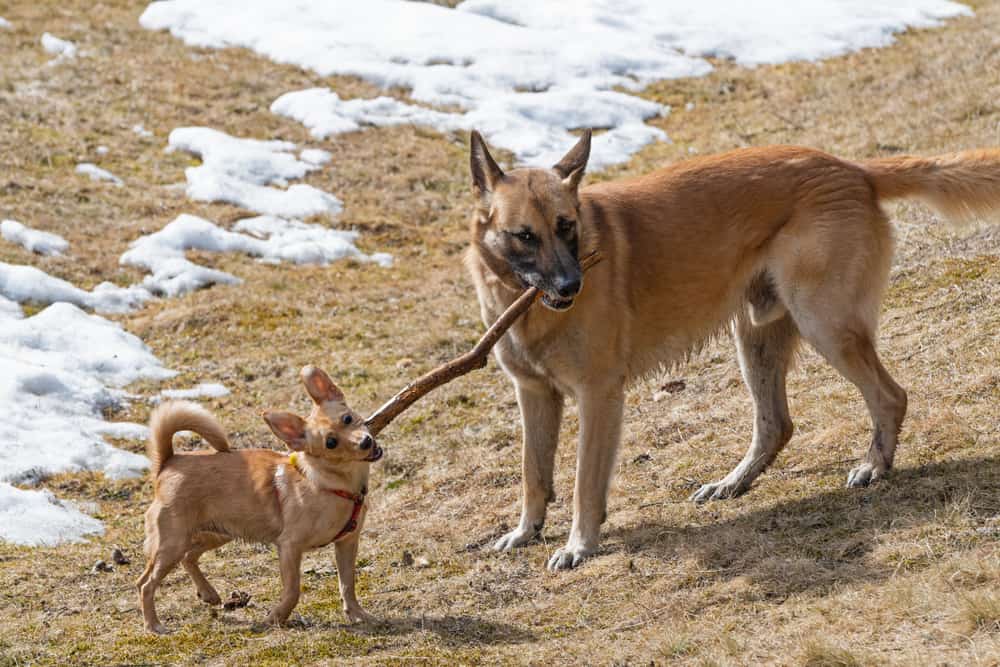 As mentioned, Rat Terriers are extremely intelligent, which means that they can be easily trained, although some can be stubborn at times. The owner must try various techniques when training Rat Terriers, he needs to be patient if one method doesn’t work.

Just like the other dogs, early socialization is a must. In fact, puppy training classes are recommended. They can excel in agility, obedience, rally, and other canine sports. They have a strong prey drive, which means that they should never be allowed off-leash, or else they’ll chase small animals, such as cats or squirrels.

Rat Terriers respond quickly to positive training methods. They thrive on phrases and love to please their owner. They are the calmest of the terrier breeds, and they’re at their best as members of a human family. 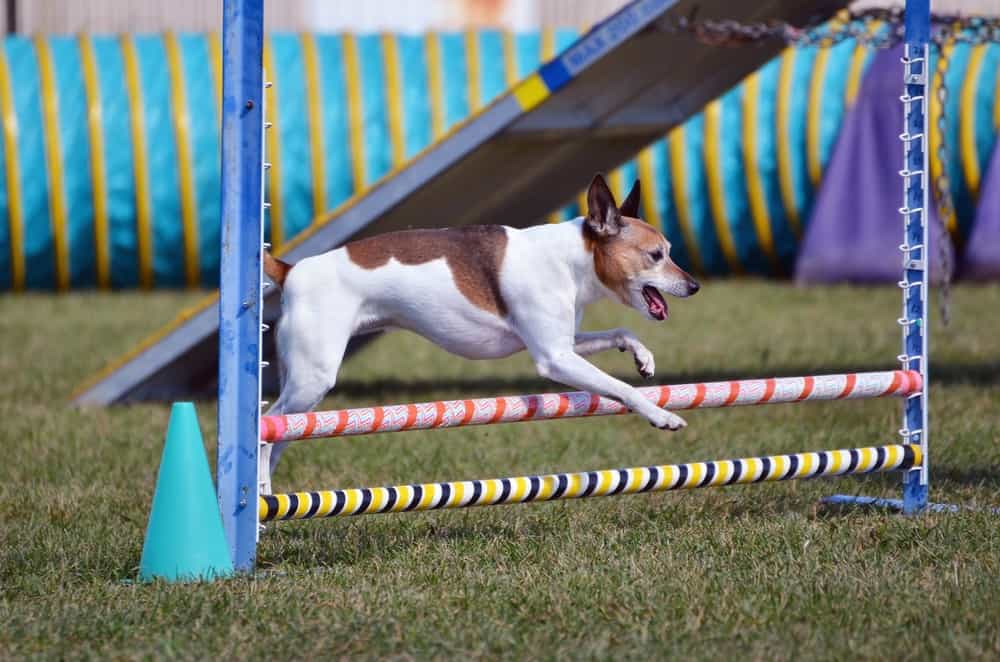 Because of their high energy and compatibility with kids, Rat Terriers are considered good family pets. They are perceptive and intuitively respond to their human family’s moods. They always want to be around you and would follow you anywhere in the house.

They are wonderfully patient with kids, even those who are not part of the family. They’re also not aggressive with other dogs. As a matter of fact, it’s the other way around – they actually love them and would want to play with them, so be careful if you have another aggressive dog in your house.

However, this breed is prey-driven and would chase small, quick-moving animals. So, if you own a hamster, mouse, rat, or any small animal, you may want to be on the lookout.

Rat Terrier will do well in an apartment as long as they get the daily exercise that they need. They are fairly active indoors and outdoors. Also, these small-sized breeds love to dig. Dedicating a small area in the yard to dig up to his heart’s content and he will be happy. 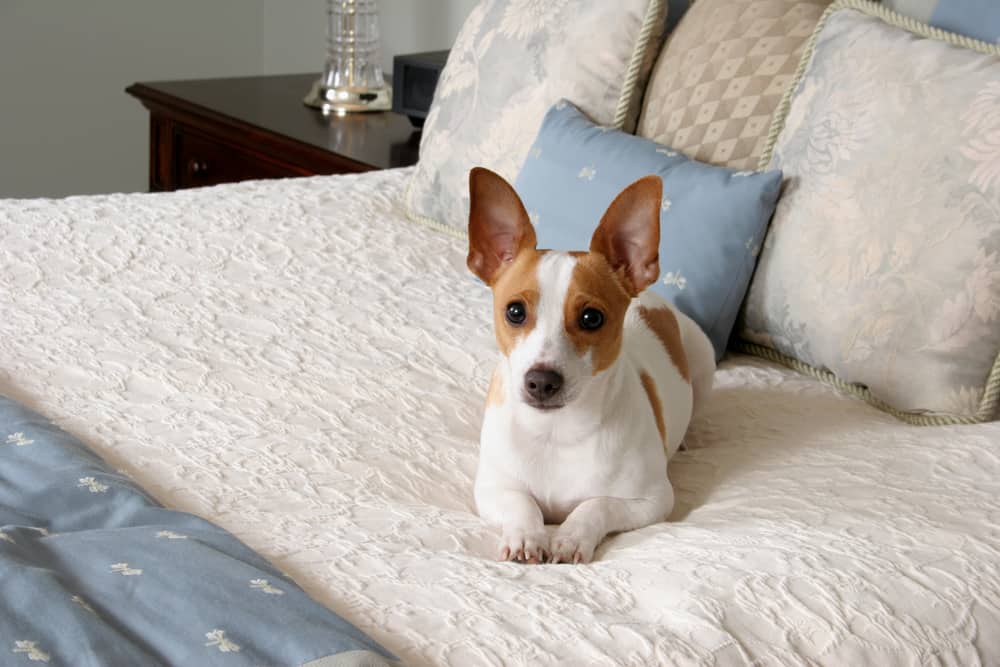 Rat Terriers are sweet, fun, loving dogs. They want to be with their family most of the time and are extremely affectionate with them. That being said, this breed can suffer from severe separation anxiety.

They have a tendency to become one-person dogs, but they can also form strong attachments with other family members. 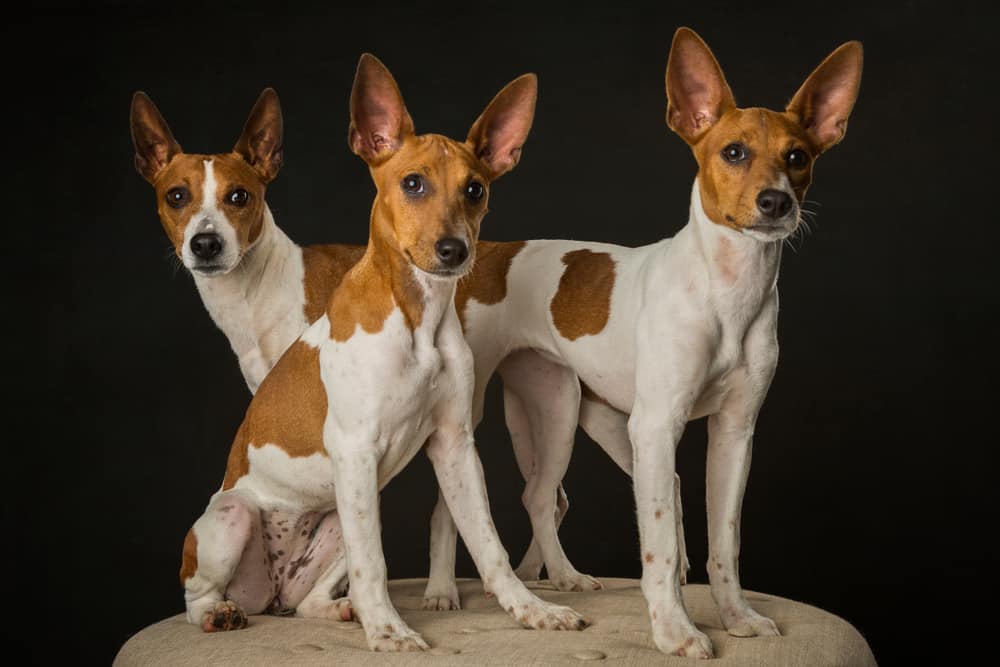 Allergies, either from inhalants or foods, are common among this breed. Misaligned jaws, or Malocclusion, are also frequently seen among this breed, but it will not typically affect their health. Patellar luxation, or slippage of the kneecap, is pretty common with many small dogs and can be corrected through surgery. They are also prone to Legg-Perthes Syndrome: a degeneration of the head of the femur, causing walking difficulties and pain. Just like Patellar luxation, this condition can also be treated with surgery.

Here is the recommended health test of Rat Terriers from the National Breed Club: