For soon-to-be dog owners, choosing the best dog might be too complicated. If you are looking for a dog bred to provide you service, as well as a companion, then you might want to read this article until the end.

Today, we will talk about the Labradoodle. A dog that is happiest around the people it loves, and a dog that will shower its family with affection and devotion. This dog proves that it could be a versatile family member and a therapy dog as well.

With the energy of its Labrador Retriever parent, and the intelligence of its Poodle parent, this dog is seriously a joy. In no time, it may be the most popular mixed breeds around.

In 1989, Australian breeder Wally Conron conducted the first purposeful crossbreeding between a Standard Poodle and Labrador Retriever to the Royal Guide Dogs Association of Australia. Conron hoped that the combination of the two dog breeds would provide a guide dog suitable for people with allergies to fur.

However, there were some controversies over Conron taking credit for the first Labradoodle since the dog mix had been known in the United States since the 1950s. In fact, in 1955, the term “Labradoodle” was used by Donald Campbell in his book, Into the Water Barrier, to describe his Labrador-Poodle cross.

Because the Labradoodle is a crossbreed between two dog breeds, the appearance may vary in size, color, and coat. The color maybe apricot, black, blue, café, caramel, chalk, chocolate, cream, gold, parchment, red, and silver. It may also have particolored coats, including brindles, patched, phantom, or sable colors.

Generally, the coat’s length is between four to six inches. It has a single coat with hair ranging from straight to lose curls. The curls are not tight and the coat is not thick, or fluffy.

There are three types of Labradoodle’s coat. The Hair coat, which is similar to fur in shedding breeds, is the most unpopular. This coat is seen in first-generation, and breeders try to avoid this coat. The Wool coat is dense and similar in feel to a lamb’s wool. It does not have a “doggy” odor and is usually non-shedding. The third type is the Fleece coat. It has a silky texture often described as an Angora goat texture. This type of coat ranges from straight to wavy. 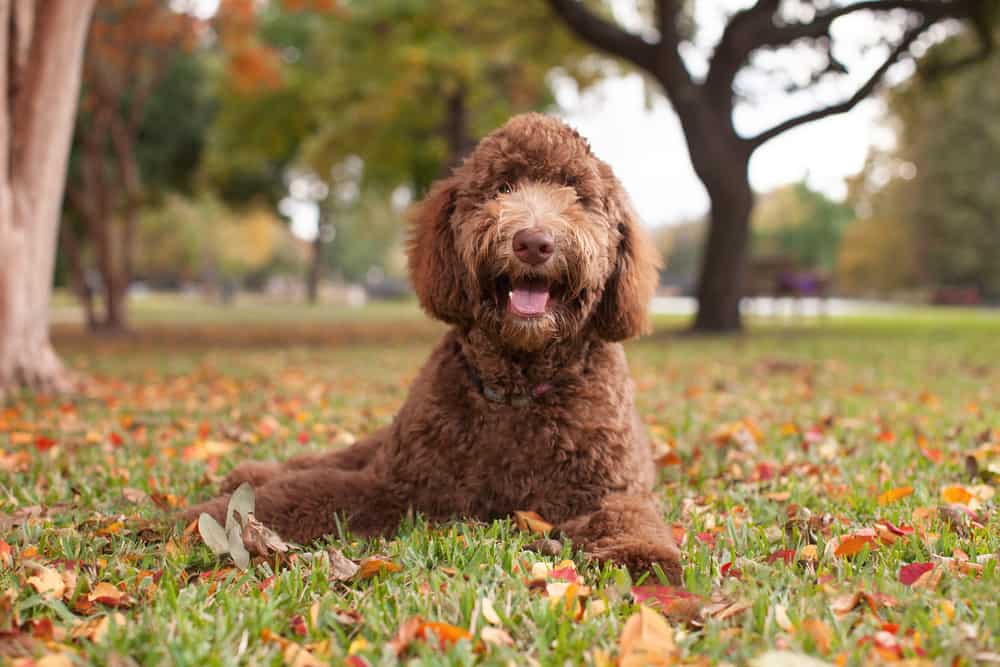 The Labradoodle’s size will depend on its Poodle parent. It comes in three variations, namely Standard, Medium, and Miniature.

The Miniature size should be between 14 to 16 inches in height, with weight ranging from 15 to 25 pounds. 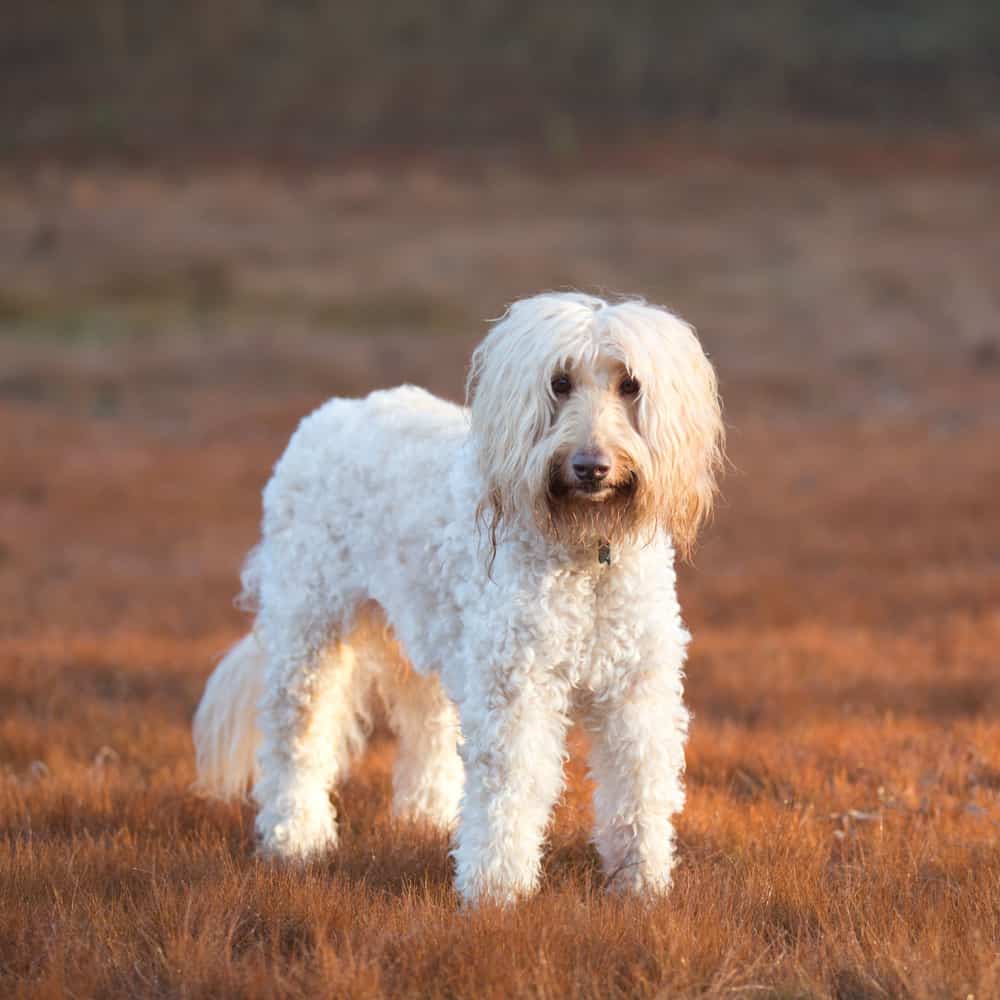 The average lifespan of a Labradoodle is around 12 to 16 years. Compared to other dog breeds, the Labradoodle tends to have a longer life expectancy – particularly when compared to larger dogs. Also, the fact that its parents are both generally healthy dogs means that this breed is less likely to face specific genetic weaknesses.

Depending on the Labradoodle’s coat type, expect this breed to be non- to average shedder, especially those dogs with Wool and Fleece coats. However, the Hair coat type tends to shed more, ranging from low to average shedding.

Grooming depends on the length and type of coat the dog has. Usually, one or two brushings per week are enough to keep your Labradoodle in its best form. Some can be clipped and trimmed every six to eight weeks to keep the coat easy to maintain. Bathing should be done only when necessary, which is not often since most of its coat does not have a “doggy” odor.

Either way, Labradoodle is an intelligent, friendly dog. It accepts everyone, making it not an ideal guard dog. Although it may alert bark, it is more likely to invite an intruder for a cup of coffee instead of scaring them away.

Bred for companionship, this dog is devoted to its family. It is gentle, but can also be playful – showing its happiness through exuberant jumping and playing. In some cases, a Labradoodle may not be too friendly, but a well-trained dog with a good temperament is a true joy.

Some Labradoodles become therapy dogs, which means that they are too well-behaved to visit schools, hospitals, and rehabilitation centers to offer psychological and physiological support.

Labradoodle can also be your hiking companion. And since it is considered a water dog, it likes to swim, as well. 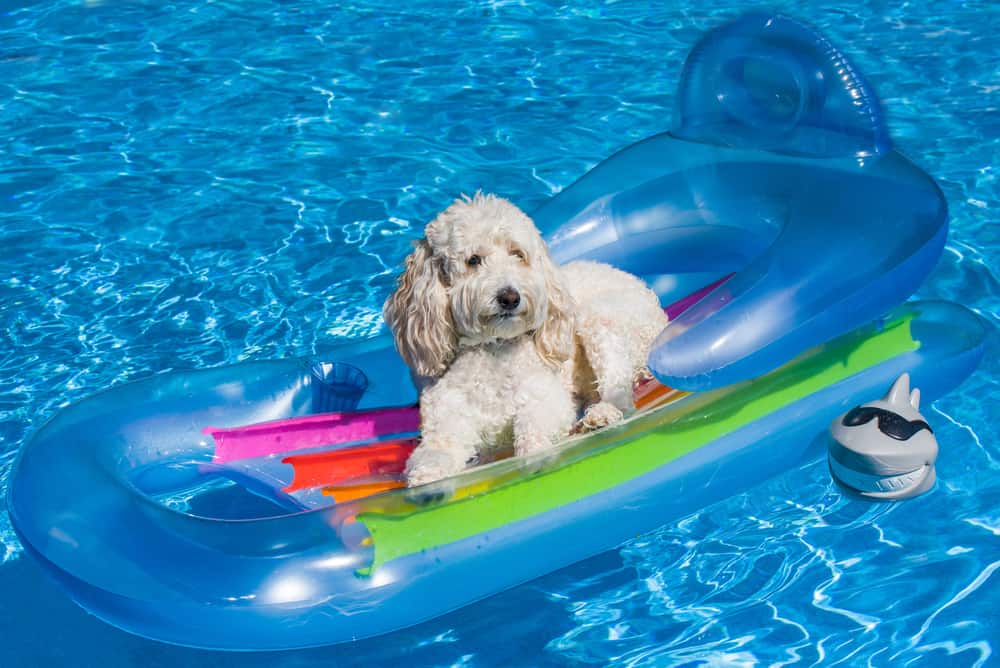 Due to its high intellect, Labradoodle needs to be mentally stimulated to keep itself well-behaved.

The Labradoodle has excellent agility. It is highly energetic, strong, and agile. Combine this with its high intellect, Labradoodle will be able to learn any sports or obstacle course in no time.

Most often, this breed displays an affinity for strong swimming ability from its parent breeds. 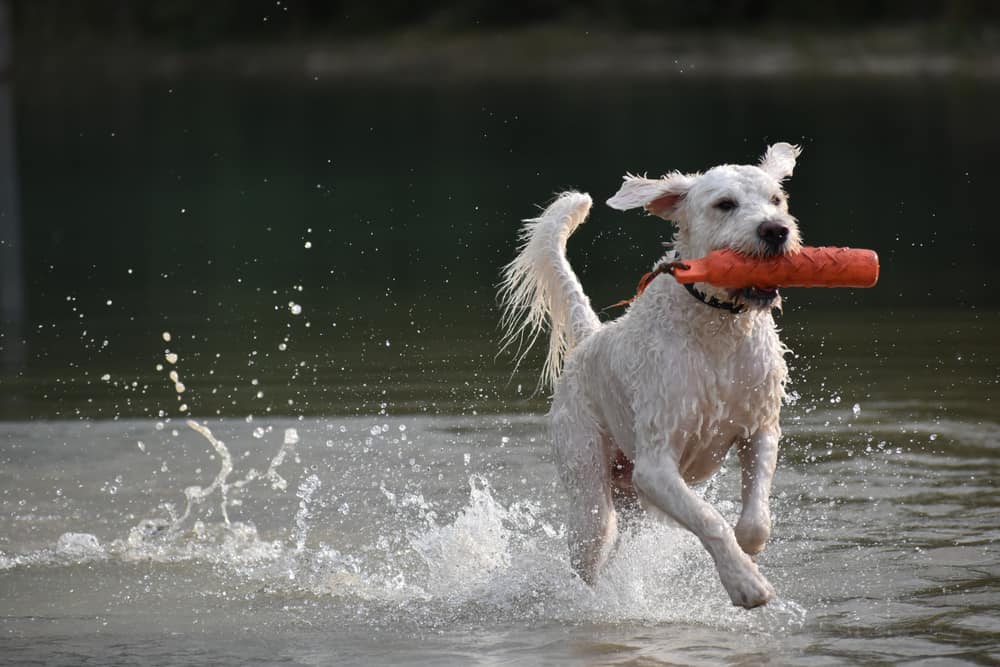 With its high energy level, Labradoodle requires 30 to 60 minutes of exercise per day. It makes an excellent jogging companion, but also needs some time off-leash to burn off energy.

Labradoodle also needs to be mentally stimulated in order to be not destructive at home.
Being a descendant of sporting dogs, Labradoodle always wants something to do. Physical activities may include stroll at the park or playing fetch in the yard. Regardless of the activity, it is happiest when playing with its owner. 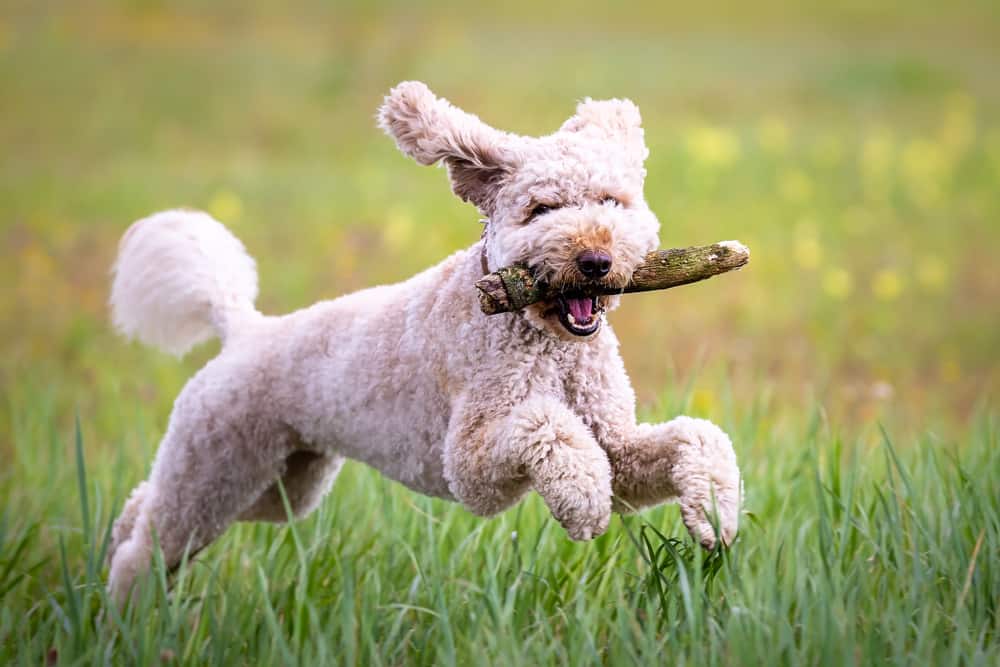 Labradoodle is a very active dog. It will approach a potential friend at a breakneck speed, which may cause trouble if the other dog is aggressive. However, with proper training, Labradoodle can learn proper doggy etiquette.

Training a Labradoodle should be easy as long as a positive reinforcement method is used. It makes a good companion for first-time dog owners since it does not need an overly firm hand to be trained.

Like every other dog, it is essential for a Labradoodle to be exposed to various environments in its puppyhood. 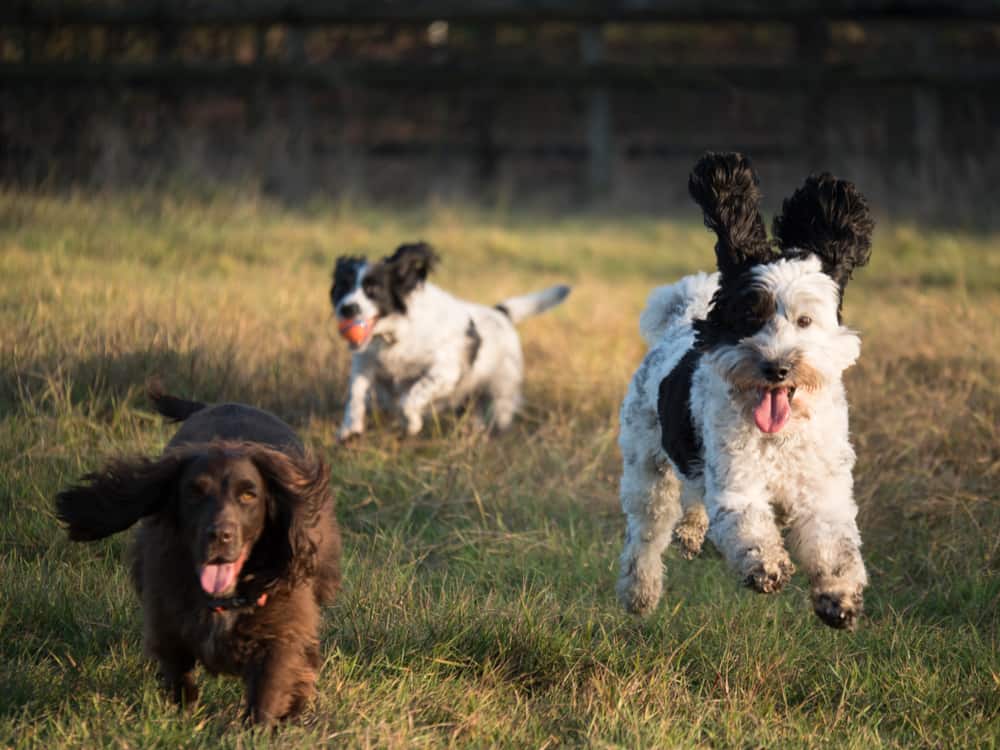 The Labradoodle is a fun, loving, loyal doodle, making them a great addition to any family. Generally, it is good with children, but it is prone to zoomies (sudden burst of energy), thus may unintentionally knock down smaller children, but it will love the kids and will be more than happy to play with them.

It also does well with other dogs and pets in the house. Like most dogs, training and early socialization are needed for optimum success at living with and meeting other animals. 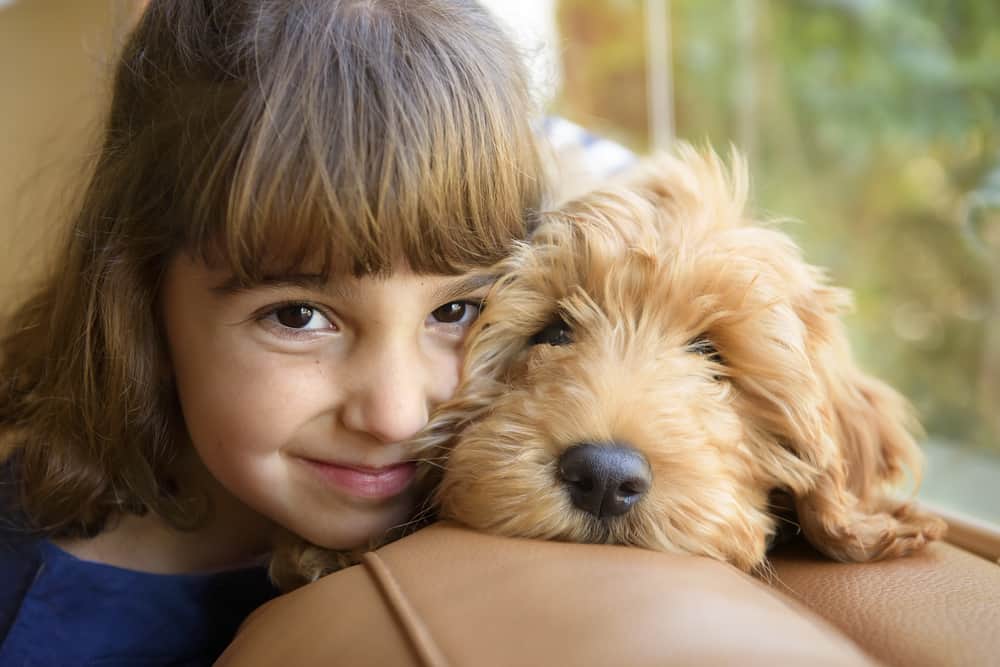 Although it can adjust to living in suburban or city environments, Labradoodle thrives in a fenced yard where it can expel its energy, thus making apartments not the ideal setting for this breed. It requires about 30 to 60 minutes of daily exercise. For standard-sized dogs, even more, exercise is required.

The Labradoodle is bred for companionship, which means that it should live inside the house, not in the yard. It is the happiest living with the family – sleeping on your feet, or in the bed next to yours. 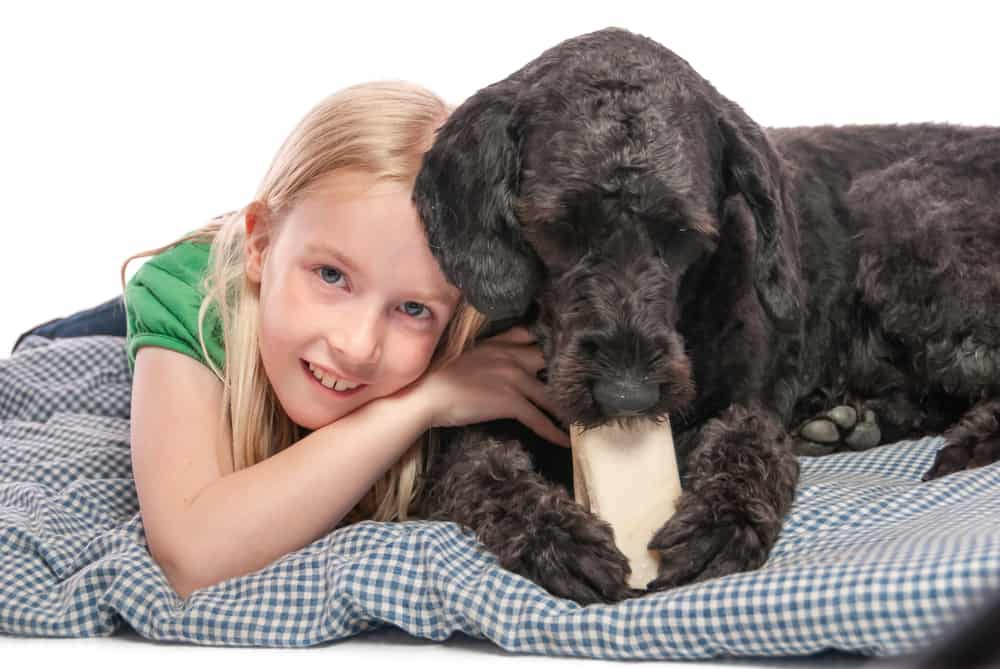 Labradoodle is popular for being extremely loyal and affectionate with its family. While these are two desirable traits, it may lead to separation anxiety when it felt neglected for a long time.

To prevent this from happening, the owner must meet his Labradoodle’s basic needs such as a sufficient supply of food and water. It is just as important to play with it and meet its exercise needs.

Having a usual routine will make Labradoodles less likely to be scared of what is going to happen next. 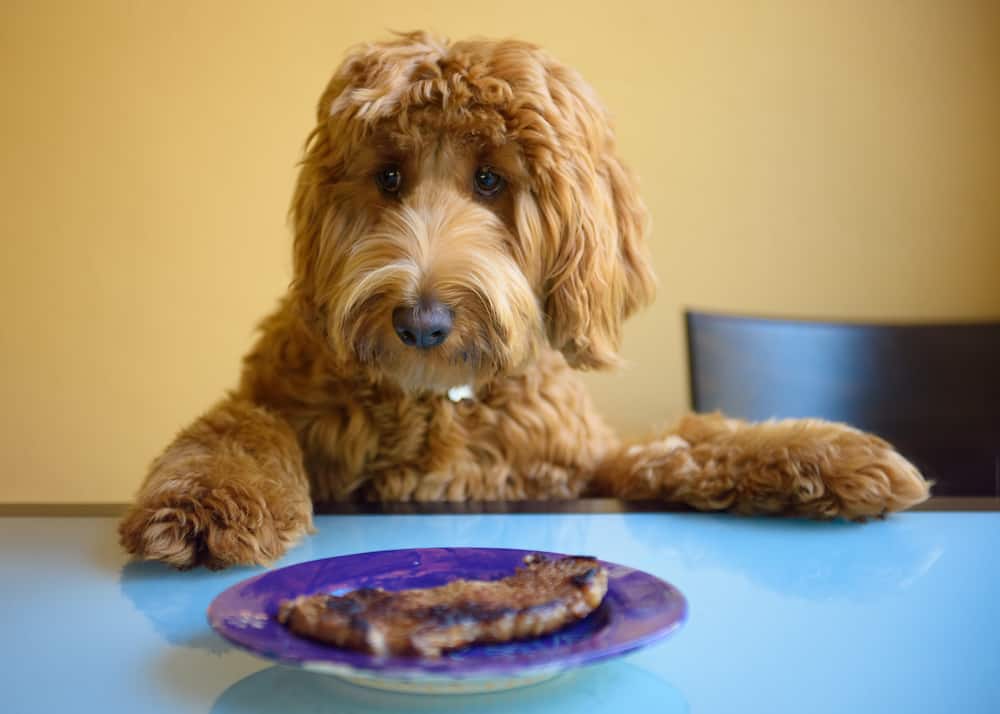 According to the Australian Labradoodle Association of America, Labradoodles are generally considered healthy dogs. But just like every other breed, they may experience certain health conditions.

A few conditions to watch out for are ear infections; hip and elbow dysplasia; epilepsy; allergies; eye diseases; and Addison’s disease – an endocrine disorder.