Bernedoodle fans brag that this mixed breed has the best of both worlds from its Bernese Mountain Dog and Poodle parents. It is an adorable, gentle dog, and is considered one of the most loyal family companions. It loves the outdoors, just as much as it loves to snuggle on the couch with its humans. Above all, it inherits a nearly hypoallergenic coat from its Poodle parent, making it the best companion for allergy sufferers.

It was bred solely for companionship – this goofy, charming dog loves attention and cuddles from its family. Plus, it inherits an almost hypoallergenic coat from its Poodle heritage. The more poodle it has, the closer to hypoallergenic this dog is. It is happy curling up on the couch with its family, as it is hiking a trail alongside its human.

Bernedoodle comes in an assortment of colors and sizes. Most commonly, it has a tricolor coat (black, white, or brown), thanks to its Bernese Mountain Dog heritage. It can also be pure black, black and white, or a random mix.

It has a long, wavy, or curly coat that is ideal for those with allergies. The more Poodle it is, the curlier it will likely be. In some cases, it can have a straighter coat similar to its Bernese Mountain Dog parent, which means it will shed more and will be less hypoallergenic.

Because of its Poodle parent, Bernedoodle may come in three sizes: tiny, miniature, and standard. The Tiny Bernedoodle, bred from a Toy Poodle, stands at 12 to 17 inches tall at the shoulder and weighs around 10 to 24 pounds. The Miniature Bernedoodle stands at 18 to 22 inches tall and weighs between 25 to 49 pounds. Lastly, the standard size stands at 23 to 29 inches and weighs about 70 to 90 pounds. Generally, males are larger than females. 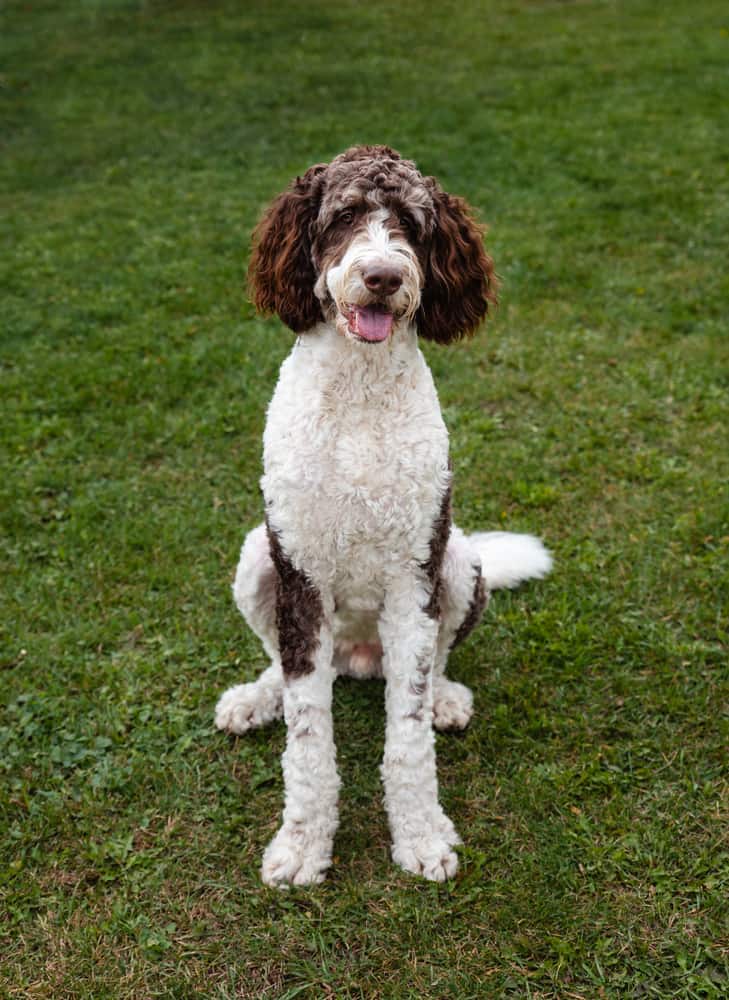 Depending on the size, the average life span of Bernedoodle may vary. The Tiny Bernedoodle has a life expectancy of up to 18 years. The Mini Bernedoodle typically lives around 14-17 years with a healthy lifestyle. And finally, the Standard Bernedoodle has the shortest lifespan compared to the other Bernedoodle size at only 12 to 15 years.

Bernedoodle sheds little to none, therefore frequent brushing is needed to avoid painful matting. The straighter its coat, the more it will shed.

However, a very curly, hypoallergenic dog will need to be clipped every few months and more often needs grooming. Remember, just because the breed is low-shedding does not automatically mean it is low-maintenance.

Gentle, playful, and slightly goofy – that’s how a Bernedoodle is usually described. Plus, it tends to be hypoallergenic, making it the best companion dog especially for allergy sufferers. Its thick coat makes it tolerant to cold weather. It is a good hiking companion, but also a good cuddle buddy.

Although intelligent, it tends to a bit goofy and loves affection from its humans. It is not aggressive, but like its parents, it may be sensitive and skittish.

In some cases, it may get more Poodle traits, and sometimes it may closely resemble its Bernese parent. Either way, it will never change the fact that the Bernedoodle is an adorable, affectionate, and smart dog. 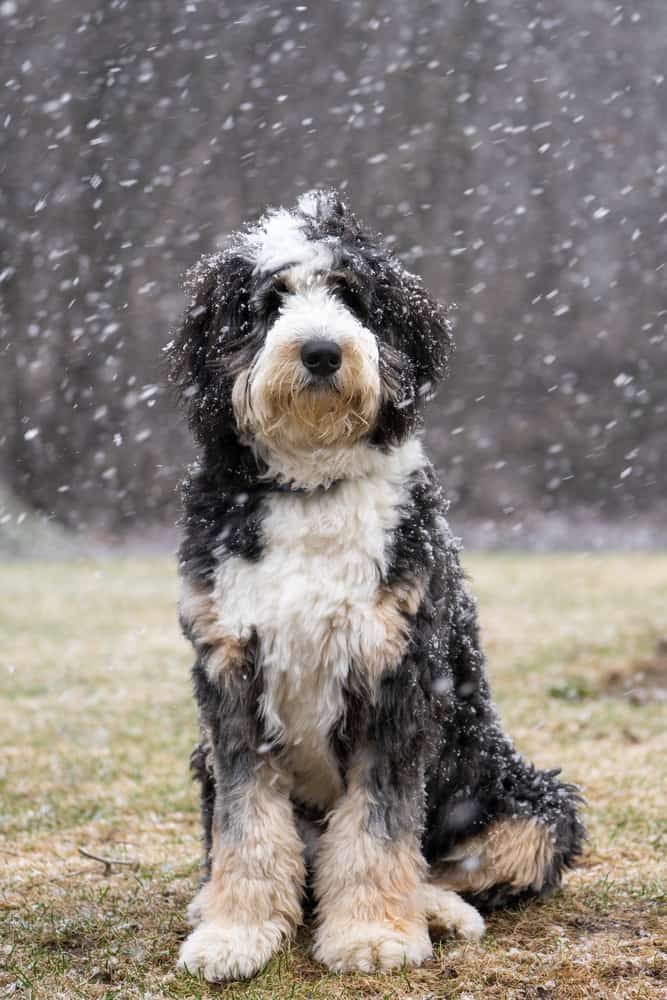 Bernedoodle inherits its high intelligence from its Poodle parent. It can learn good habits just as easily as bad ones. It’s a playful and active dog who can be stubborn as a puppy but is highly trainable.

Just like the other dogs, it is essential to keep up with its training. Early socialization and exposure to other animals, humans, and the environment is needed to keep them well-behaved when meeting strangers. 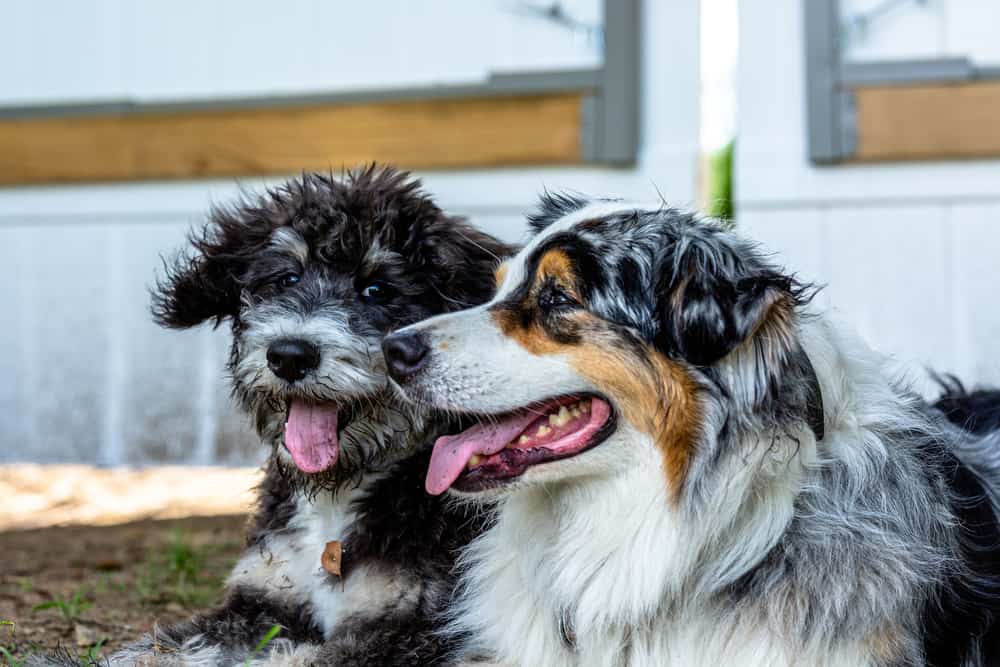 Bernedoodle is an active dog. It loves the outdoors, and with the strength of Bernese and hunting skills of Poodle, it will be extremely athletic and agile.

However, it is also the type of dog that is happy to jump on the couch and cuddle with you all day. 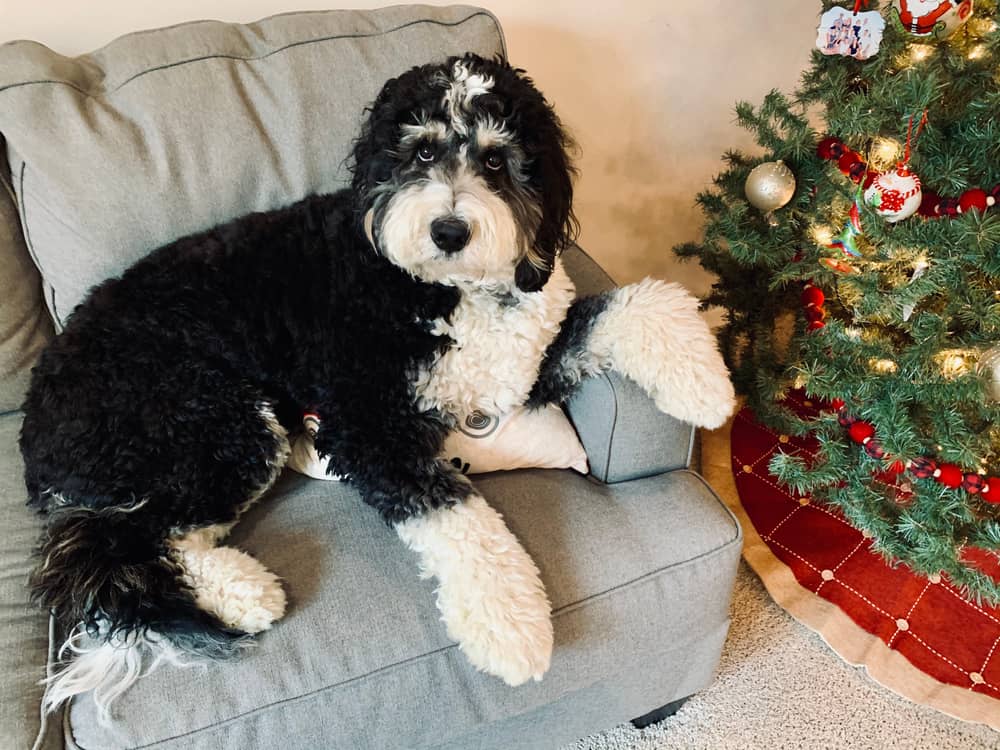 A Bernedoodle has a high energy level. It thrives in an area where there’s enough space to play in. It needs a daily stroll at the park or any physical exercise that would burn off its energy.

To develop positive habits, a Bernedoodle also needs consistent social stimulation. The more exposed it is to various situations, the easier it is to handle when meeting up with new faces. 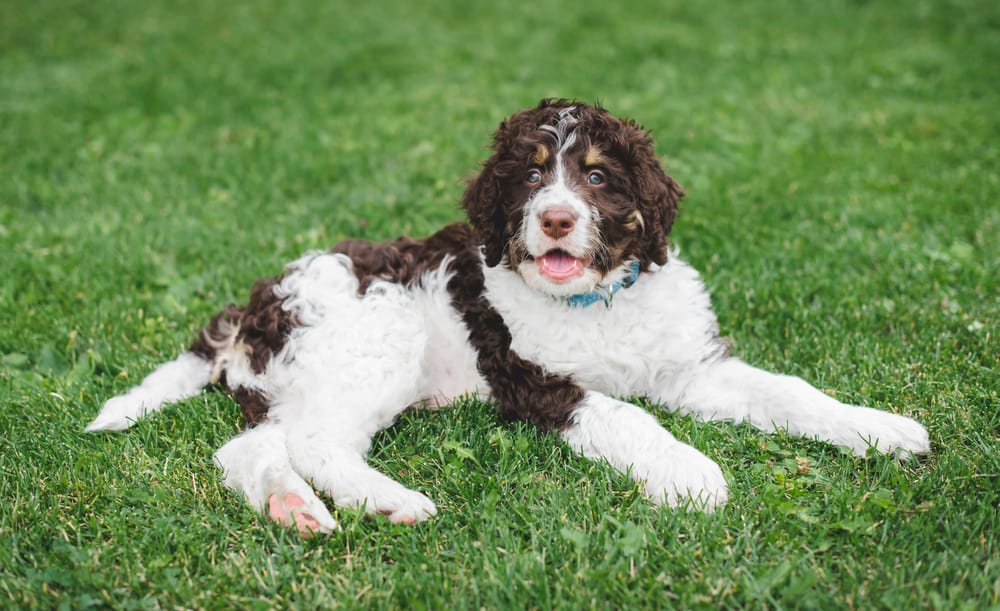 If a Bernedoodle is properly socialized in its early years, it is likely to learn commands and social cues easily. Early socialization also helps this breed to behave well around other animals.

As mentioned earlier, its high level of intelligence allows this breed to easily learn behaviors, regardless if good or bad. Just like most dogs, positive reinforcement is an effective way to properly train Bernedoodles. In some cases, a high level of patience is needed, especially if it inherits the Bernese’s stubbornness or the Poodle’s high energy level.

With proper training, Bernedoodles can be very charming and caring, which makes it an ideal companion for children, the elderly, and service occupations.

Keep in mind that Bernedoodle is bred for companionship. That being said, it is gentle-natured and loves children. With its goofiness, playfulness, and affection, it is a top candidate for being a perfect family pet. Its long life span provides a wonderful lifelong companion as young kids grow into adults.

A Bernedoodle always craves attention, which means it is suited in a home where it is not left alone for long periods of time. It is happiest when playing, or cuddling with its family.
If exposed to early socialization, it will do well around other dogs or animals in the house.

Depending on its size, a smaller mix could easily thrive in an apartment, provided that it gets the attention and exercise it needs to stay healthy and well-behaved.

On the other hand, the standard Bernedoodle does better in a yard where there is enough space to run around.

Keep in mind that this breed is so gentle that it doesn’t make good guard dogs. It barks infrequently and more likely to befriend an intruder than scare them away. 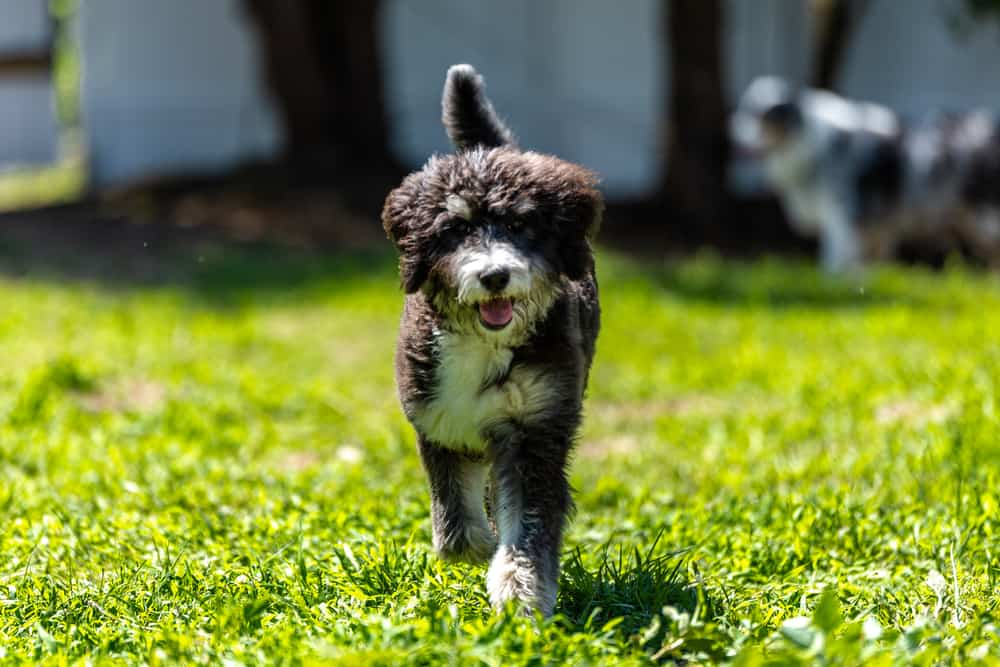 A Bernedoodle does well both indoors and outdoors, so long as it is with its human. It can be your snuggle buddy or your hiking partner. It does not know personal space, therefore should not be left alone for a long period of time. Loneliness can result in separation anxiety, which can cause negative habits, such as whining and chewing.

Because it is a mixed breed, a Bernedoodle tends to have lesser health problems than Poodles or Bernese Mountain Dogs. However, there may be some conditions that Bernedoodles may be predisposed to, such as hip and elbow dysplasia, eye problem, and skin issues like hot spots and allergies.

Generally, a Bernedoodle is a healthy breed and is much healthier than either of its parents.