When it comes to handling big games, such as deer, bears, and wolves, the Weimaraner is your best companion. They are also called “Silver Ghosts” or “Grey Ghosts” for two reasons: they follow you wherever you are, and their color makes them completely “disappear” in the fog, especially when they walk too far away.

In the early 19th century, the Weimaraner was developed at the Court of Weimar – a place in Germany where the breed got its name. The noblemen of those times wanted brave, smart dogs with good scenting ability, as well as a great deal of speed and stamina.

It is believed that the Weimaraner’s ancestry was from the Bloodhound, the English Pointer, the German Shorthaired Pointer, the blue Great Dane, and the silver-gray Huehnerhund.

By the year 1897, an exclusive club was formed in Germany to maintain the quality of the breed. Only the members of the said club are allowed to buy Weimaraners. In 1929, Howard Knight joined the club and was able to bring two Weims to the U.S. However, Germans became so protective of the breed, sending Knight two desexed dogs. Knight did not stop, however. He kept working until he was able to acquire three females and one male puppy.

Knight was successful in breeding and in 1942, the Weimaraner Club of America was formed. By the end of 1942, the American Kennel Club officially recognized the breed.
During World War II, many Weims were sent to the U.S. since German breeders had a hard time keeping their dogs. Weims quickly became well-known. In fact, Weimaraners ranked 12th of the most popular breeds registered by the AKC in the 1950s. Due to its popularity, many irresponsible breeders bred Weims with temperament problems, and Weim’s popularity dropped.

Dedicated breeders were able to save Weimaraners, and by the year 1990s, their popularity climbed once again. Today, they rank 30th among the 155 breeds recognized by the AKC.

Weimaraners have short, smooth, and shiny coats. Those with long coats are considered a disqualification according to the AKC, although this variety is recognized in European countries.

The Weimaraner has a dark gray nose and light amber, blue-gray, or gray eyes. Their lips are loose, so expect them to splash water everywhere whenever they drink.

Weimaraners are known for their silky mouse-gray to silver-gray hair. Some self-proclaimed breeders may tell you that blue or black Weims are rare – don’t be deceived. Those colors are disqualified in the breed standard. 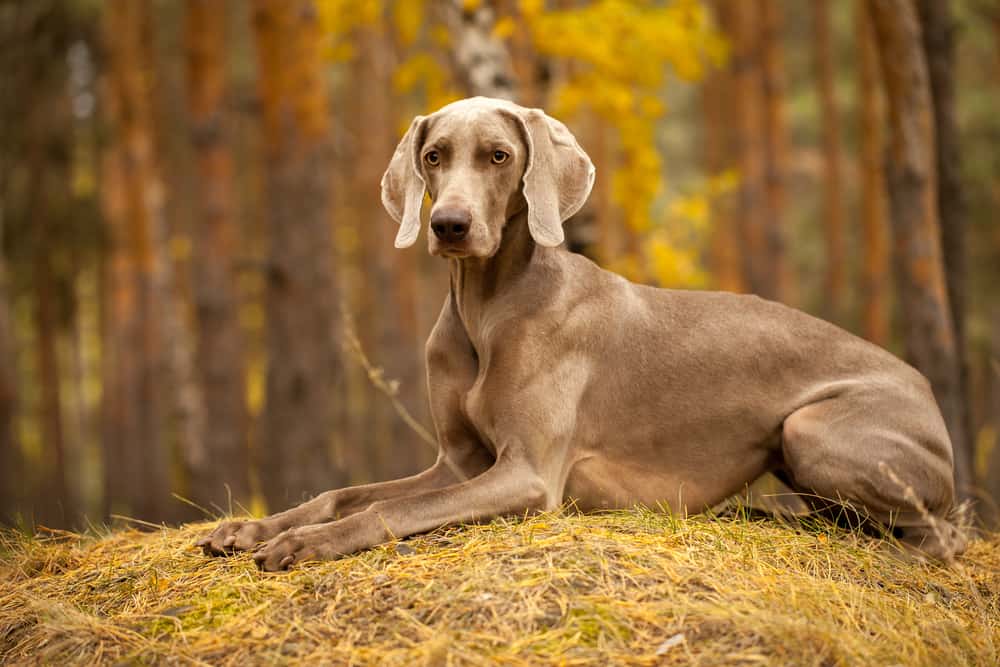 On average, male Weims stand between 25 to 27 inches at the withers and weigh around 70 to 85 pounds. Female Weims are slightly smaller at 23 to 25 inches tall and weigh between 55 to 70 pounds. All Weimaraners should look like a sturdy, powerful, athletic dog. 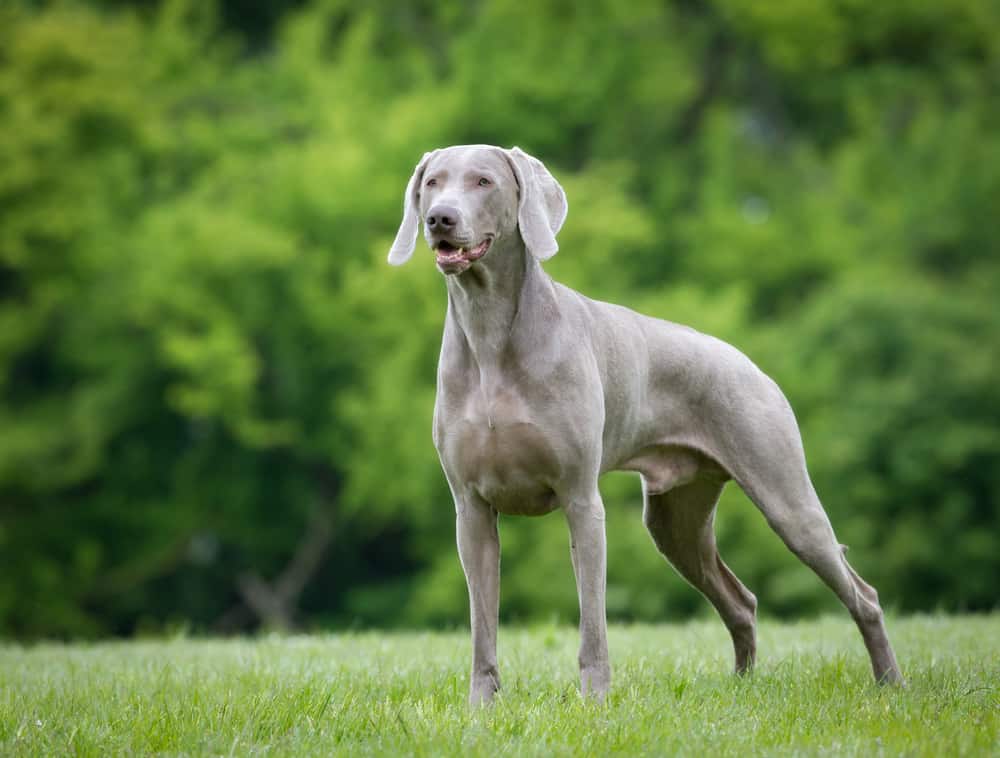 Despite being a large dog breed, Weimaraners can live a long life of 12 to 14 years. Some may even live up to 17 years! Prolong your Weim’s life by providing him with regular visits to the vet, as well as enough exercise, proper diet, and lots of love, of course.

Weimaraners shed, but they are undeniably one of the easiest breeds to groom. Weekly brushing would be enough to remove loose hair and keep their coats shiny and tidy.

They also love to play, and that includes running through or rolling in the mud. Bath him only when needed. 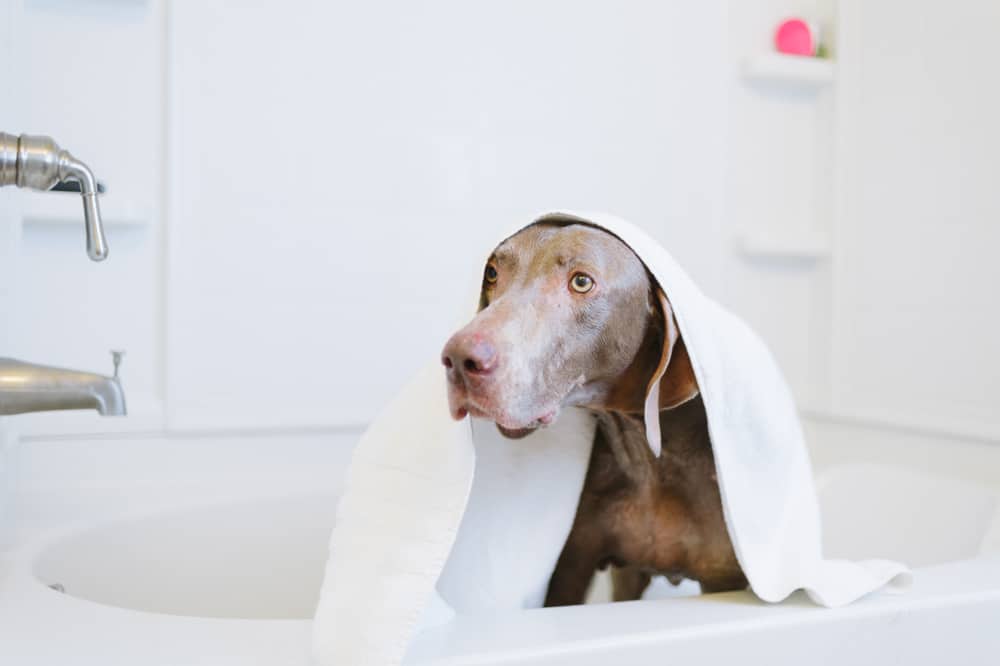 Weimaraners love to be around their human family. In fact, they are given the nickname “Shadow,” obviously because they’ll follow you everywhere around the house. They are alert, smart, and vigilant, often suspicious of strangers. It is important that they are properly trained during their puppyhood to avoid sudden aggressiveness towards unfamiliar people and animals.

They also have a tendency to rule the house. Without proper training and socialization, Weims can be destructive and may chew, bark, and chase cats. That said, they are not for the novice and timid owners. They need a firm but loving human parent who knows how to handle them well. 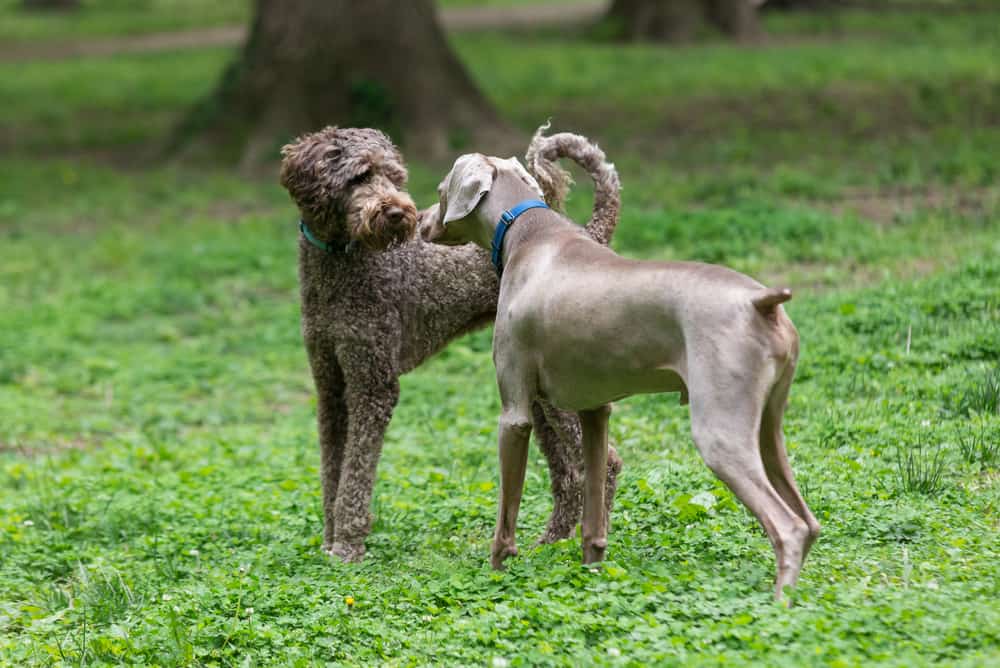 Weims are smart and fast learners. This means they can learn good and bad habits pretty much easily. That’s why it is important that they are trained early in their lives while they’re still small and highly trainable. 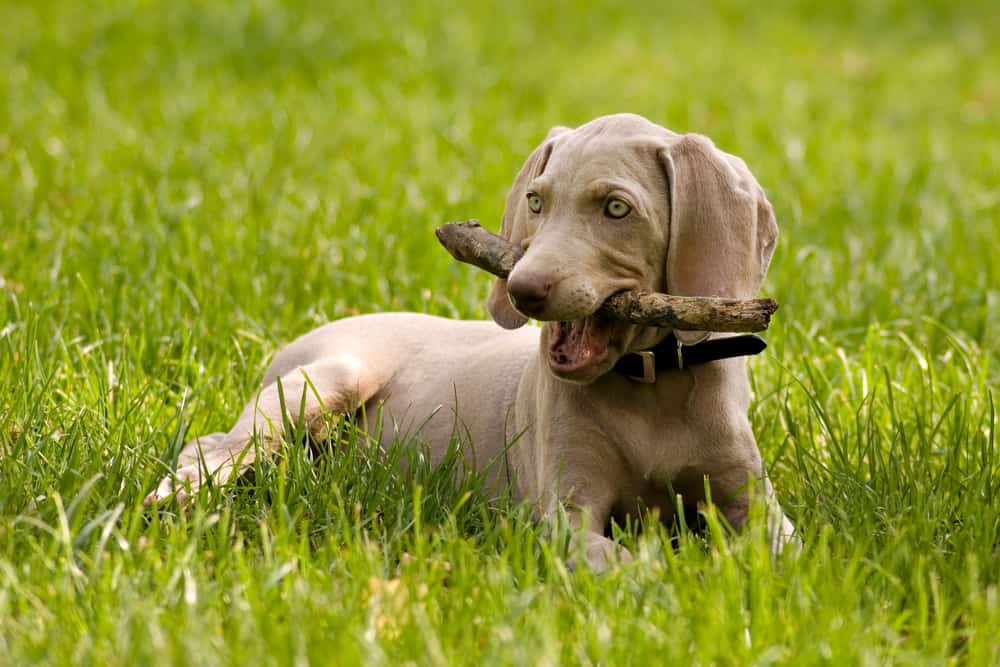 Weims are hunting dogs that were bred to chase big games, such as deer, bear, and even wolves! But ever since big games became scarce, Weims are used to hunt birds, rabbits, and foxes. They are quick, intelligent, with a good scenting ability. Bred for speed, you can also see Weims actively participating in canine sports, such as agility and tracking. 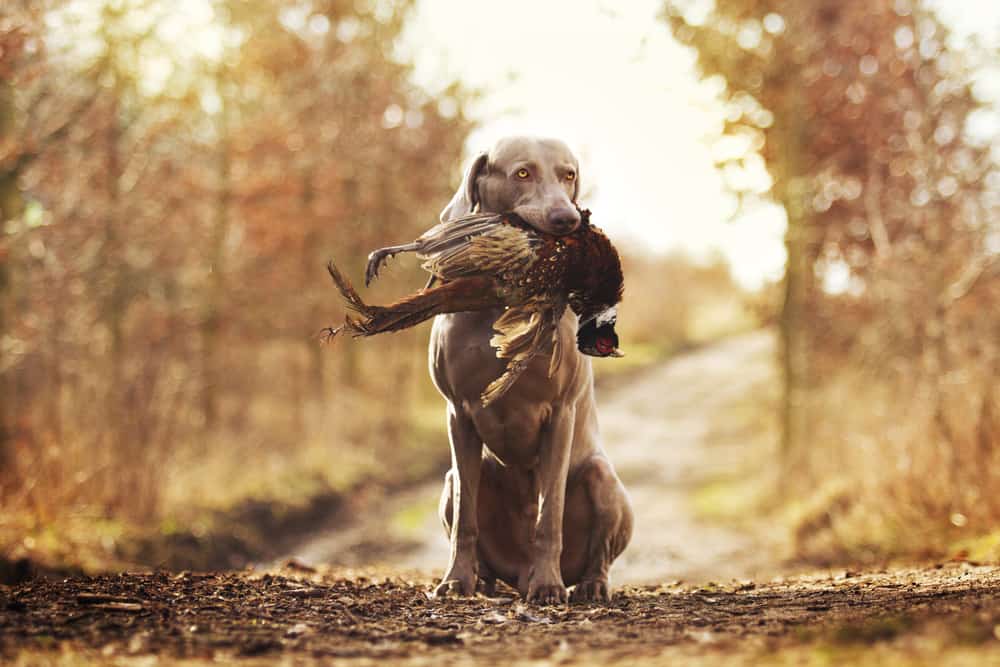 Weims are highly energetic and have a great amount of stamina, therefore they are not suitable for owners who prefer a laid-back lifestyle. They need two or more hours of daily exercise and vigorous play sessions. You can also take them with you on hiking, jogging, and of course, hunting. 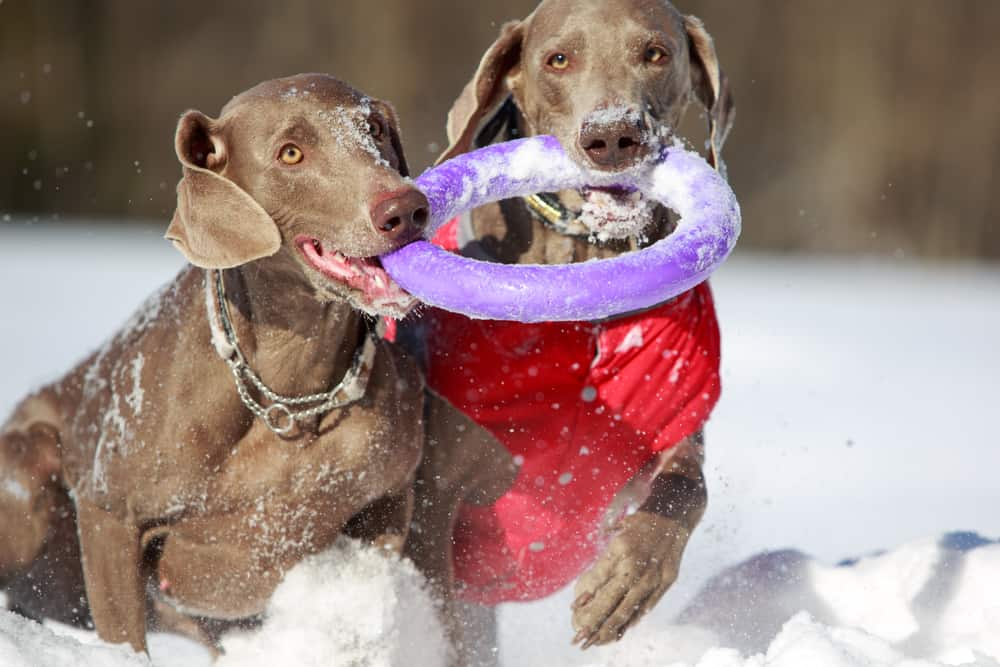 Weimaraners are smart but they are also independent, making training a challenge. They will test your patience, so it is important to be firm and reliable, yet understanding.

Keep training quick and engaging, and always end every session with a good note, praising him for something he has done. Positive reinforcement techniques should be used instead of harsh treatments as Weims are sensitive and will not respond well to anger.

If not trained well, Weims may chase off and kill anything that they perceive as prey, such as cats, rabbits, and more. They may also chase moving individuals, such as joggers and bicyclists. Therefore, training is not only recommended but a must for this hunting dog. 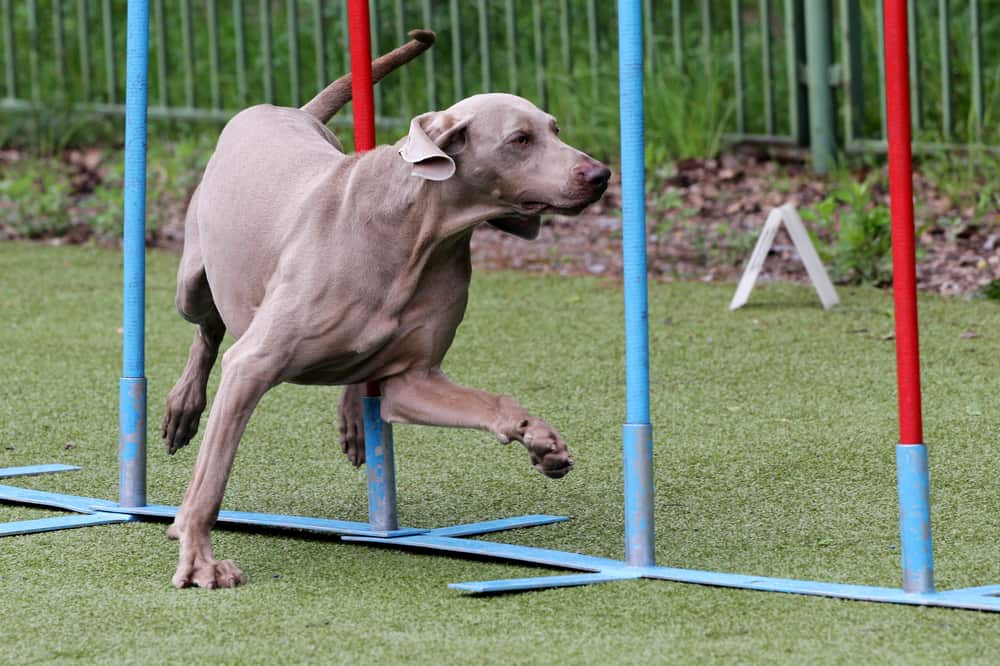 Weims love to be around their human family so expect them to follow you around the house. They may learn household tricks on their own, which are either beneficial or destructive, such as opening gates and doors – including your refrigerator’s. Obedience training is a must for this dog to avoid developing unnecessary behaviors and keep him out of trouble.

Weims also love to dig in your yard to keep moles, mice, and bugs out of your land. He will be proud of this achievement and will expect praises from you. If you want to avoid such things, make sure to meet his physical requirement.

Weimaraners make excellent companions for older children since they may accidentally injure smaller children due to their large size. 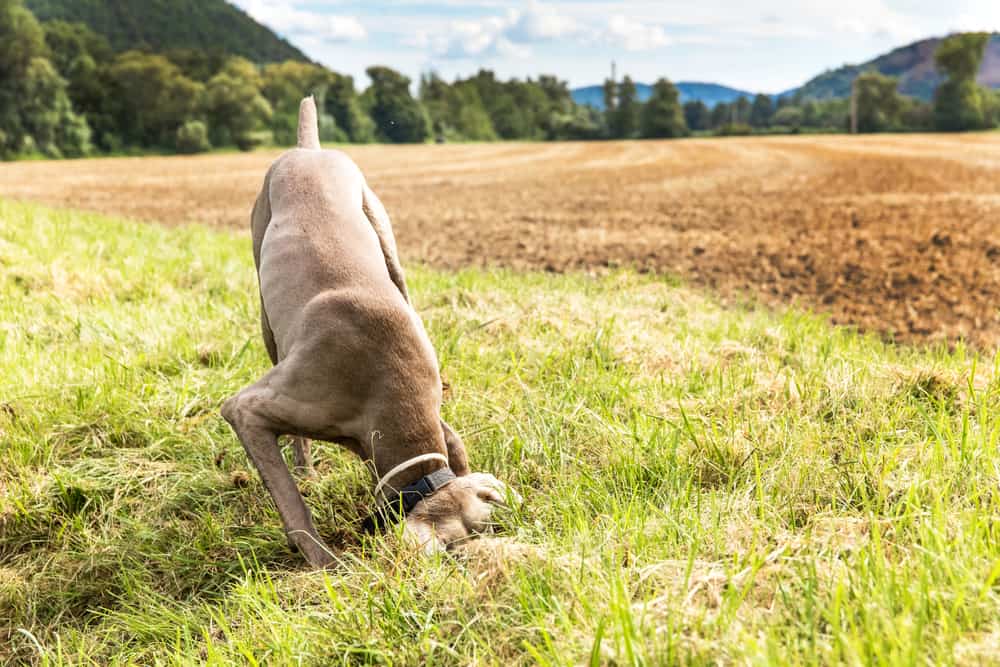 Weims are not suited for apartment dwellers. They thrive in a house with a large, securely fenced yard where they can burn off their high energy. They’re active dogs and are best suited to active families. Make sure that your yard is secured, as these intelligent dogs may quickly learn how to unlock gates, or may even jump or dig under fences.

Despite being hunting dogs, Weims should be kept indoors, not in your backyard or at the kennel. They need to be close to their family in order to protect them. 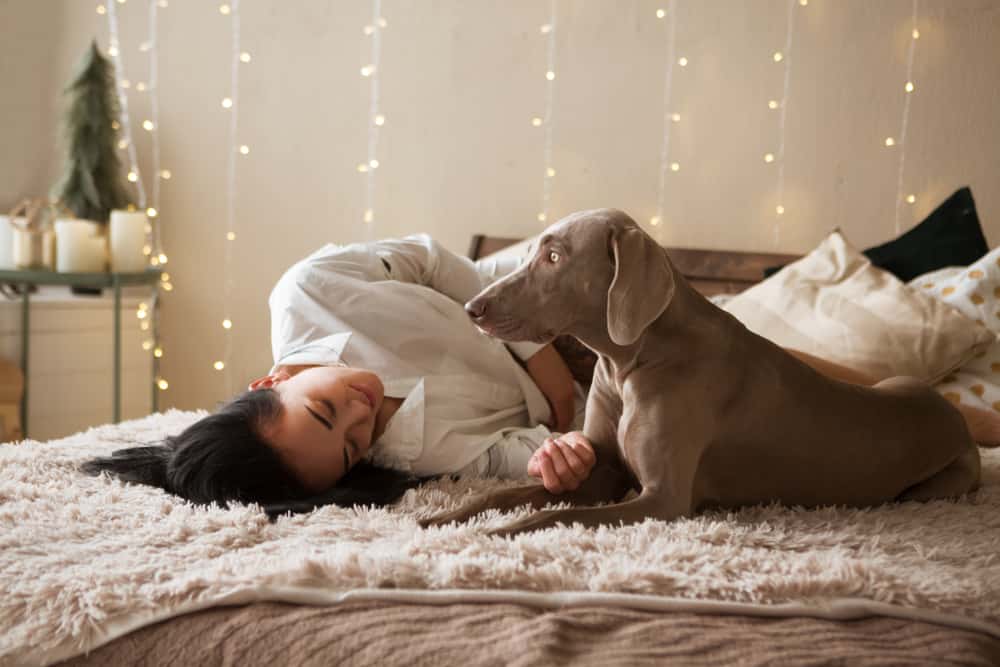 Weims are highly dependent on their human family. They may suffer from severe separation anxiety if left alone for long periods. Signs of restlessness include excessive barking, chewing, or digging. If you’re a person who’s too busy to stay at home, then Weim is not for you.

Being an athletic dog, Weimaraner can suffer from accidental sprains, cuts, and scrapes from time to time. They’re also prone to mouth and gum injury since they love to chew.

A serious health condition that this dog may suffer from is gastric torsion – a lethal condition wherein a dog’s stomach gets overstretched and twists shut. 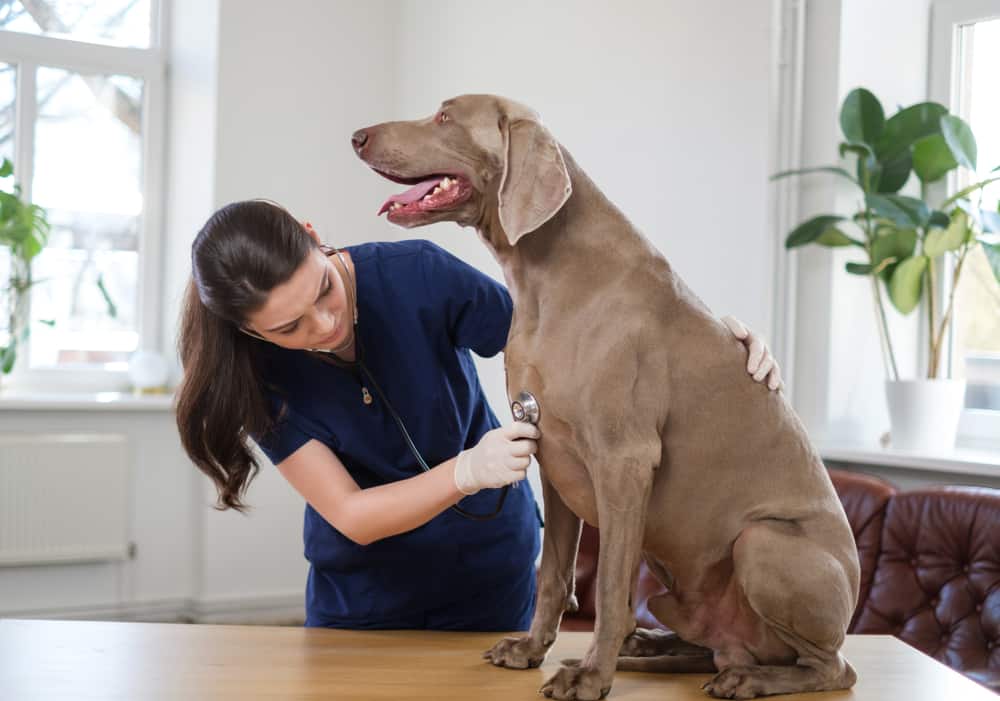