Who do you think would win a fight between the King of the Jungle and the tallest mammals In the world? Can anyone beat the king of the jungle?

The giraffe is a species of long-necked cud-chewing hoofed mammals with towering legs and long legs. They have a coat pattern of irregular brown patches on a lighter background where no two individuals have exactly the same pattern. The giraffe tongue has a black, blue, or purple coat with a somewhat pink base. Both sexes possess a pair of horns, although males have other bony projections on their skulls. Their hindquarters are adorned with large muscles that support their neck as these muscles are attached to the long spine of their seven neck vertebrae. Their tails have a tuft of black hair at the tip. 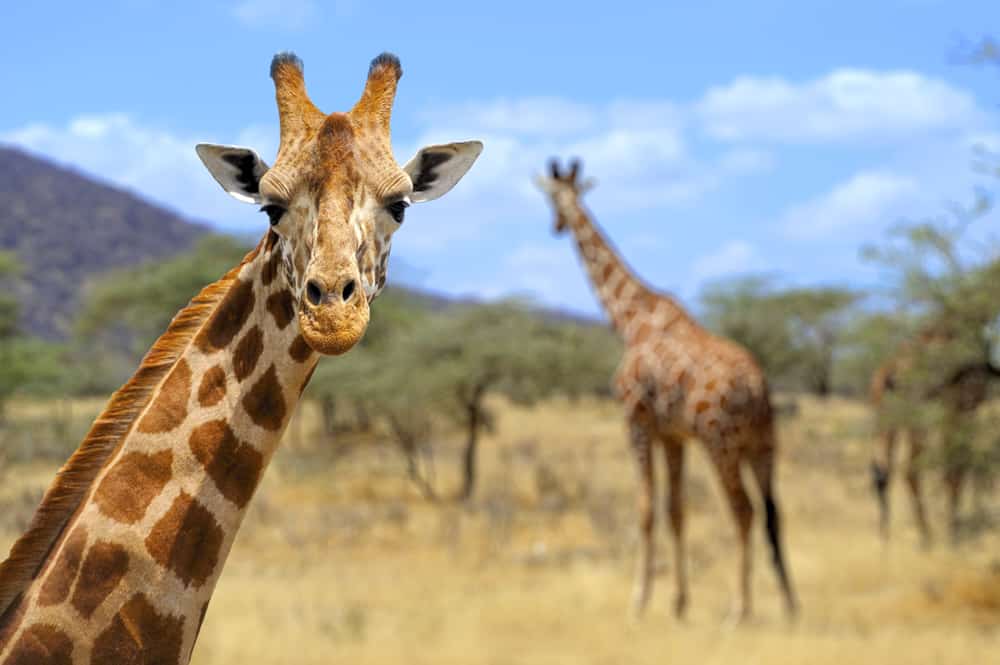 The lion is a powerfully built mammal, second in size after the tiger in the cat family. These iconic creatures have a yellow-gold coat, with a large head and short legs. Their tails tips have a tuft of hair, usually darker than the individual’s coat. These species exhibit sexual dimorphism where the males possess a distinct thick mane around their head and neck. The color of the mane is dark, almost black, making them appear larger as the thicker the mane, the healthier the cat. Females are smaller than males. 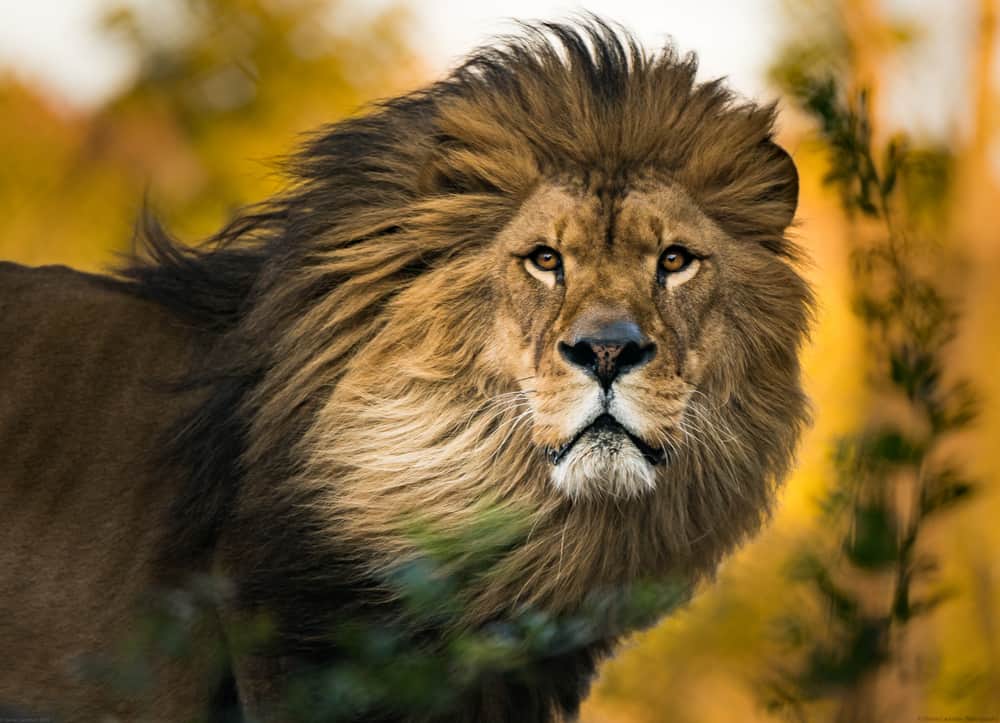 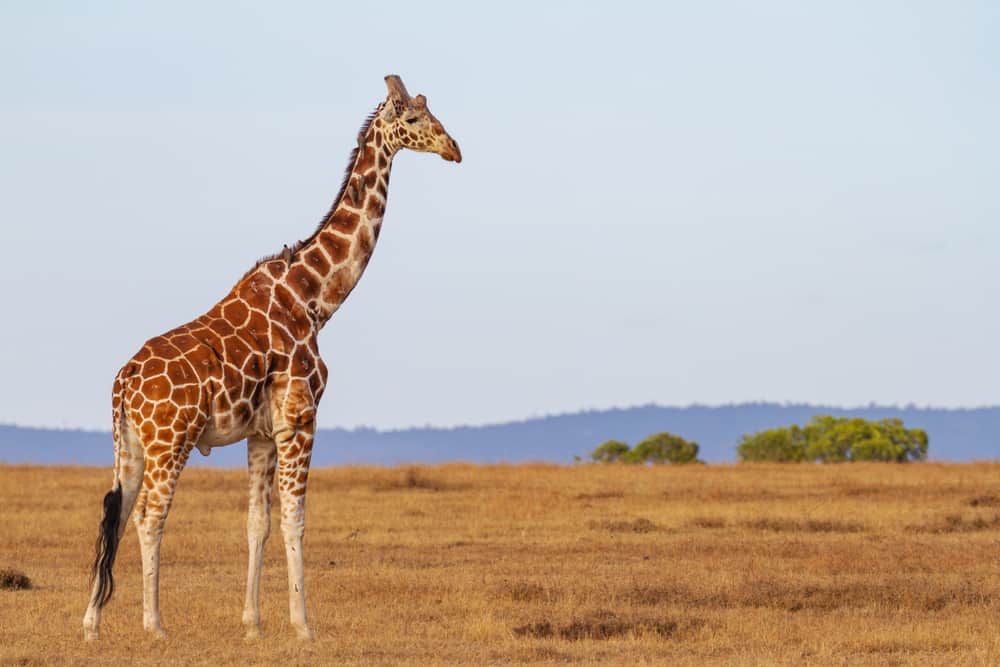 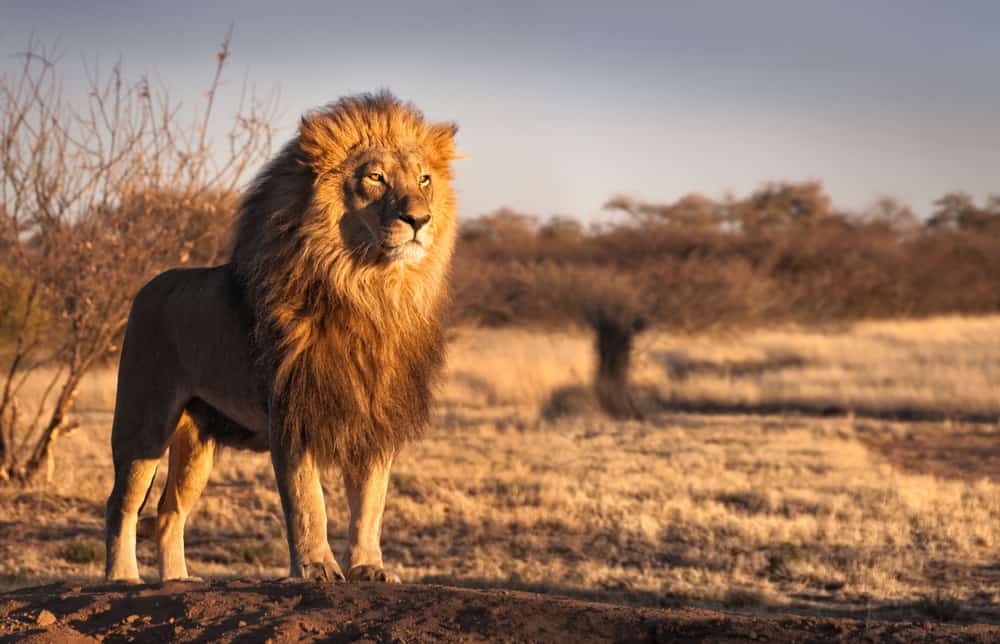 Giraffes’ range extends from Chad to South Africa, inhabiting the savannas, grasslands, or open woodlands. Most of their subfamilies live in either East Africa, Angola, or Zambia. They have a unique preference for regions enriched with acacia growth. 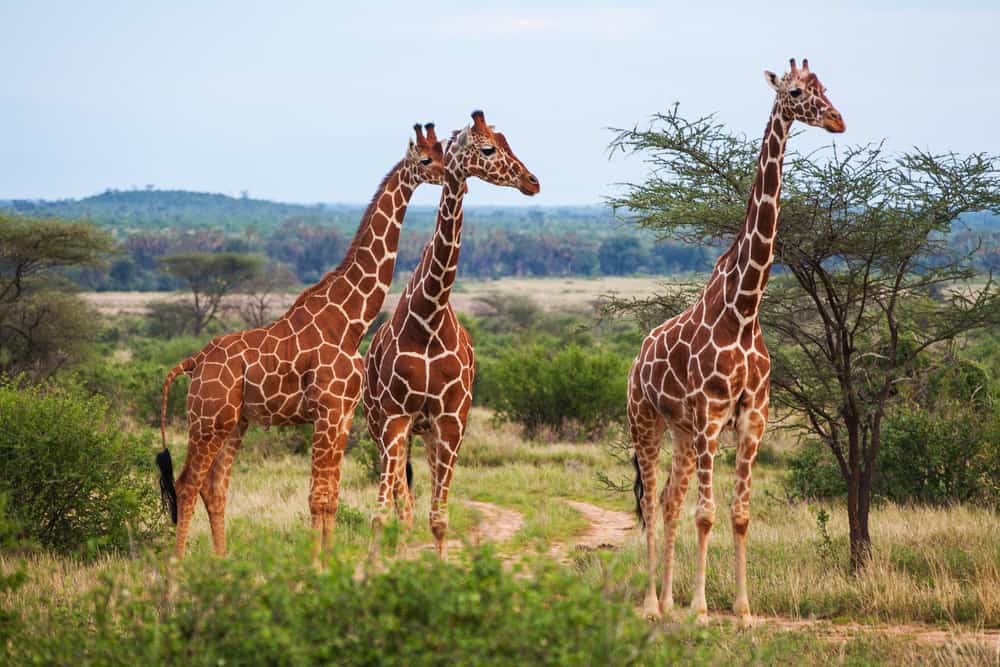 The lions vastly occupy parts of sub-Saharan Africa and only some parts of Asia and Europe. They generally roam in open woodlands, scrub, or the grasslands where they can easily hunt their prey. 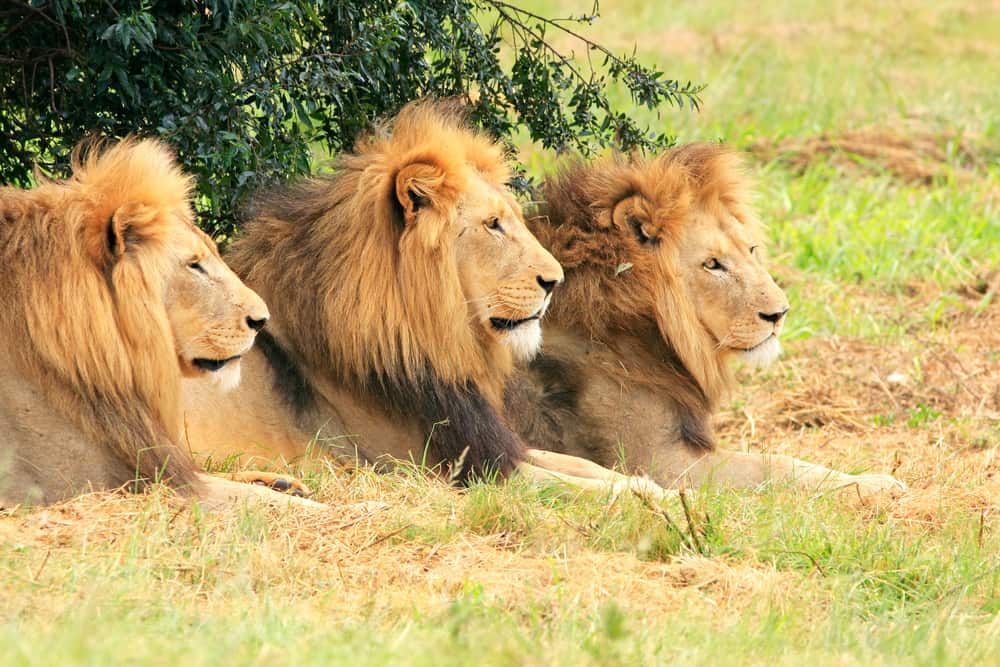 Giraffes typically live in non-territorial groups of up to 20 individuals. Though they may seem widely scattered, their excellent eyesight enables them to keep watch on their neighbors as well as spot predators from afar. They are diurnal and spend most of their time browsing on tall trees, or standing. However, they may have short instants of sleep in the daytime and that is exactly how giraffes sleep and give birth. Standing up. Bulls establish dominance to mate a female by necking which may at times progress to exchanging blows. 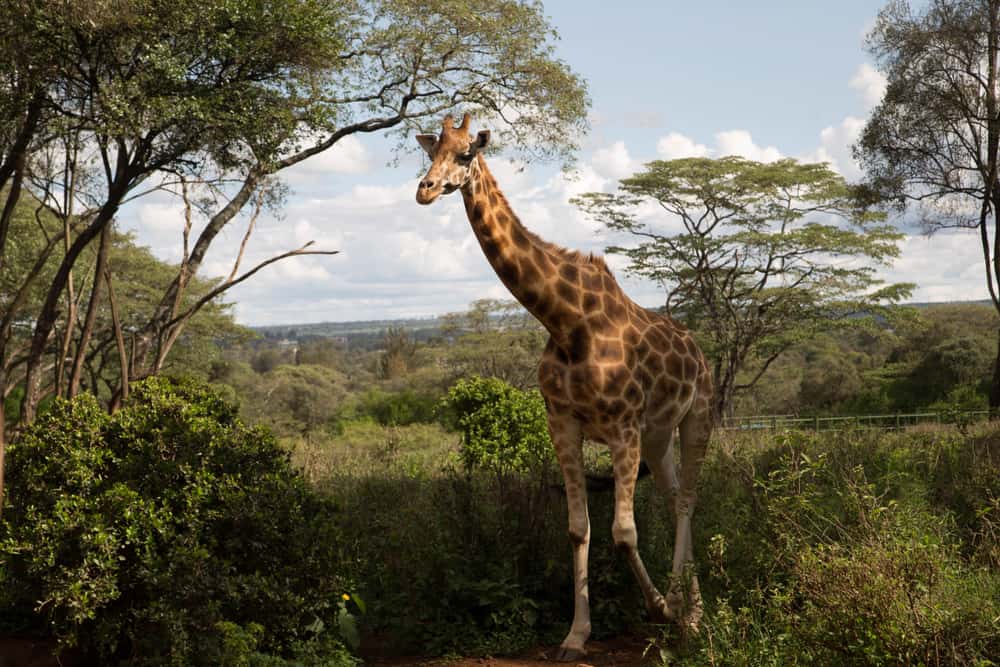 In contrast, lions are rather territorial animals, living in groups called pride. With an average size of 15 individuals, although they can be as many as 40 members, the females are rather functional than the males, as they hunt food for the group as the males keep watch and defend their territory against intruding members. They mark their territories by roaring and scent marking. This is how lion prides work. Unlike the giraffes, lions are nocturnal creatures who spend most of their day sleeping. 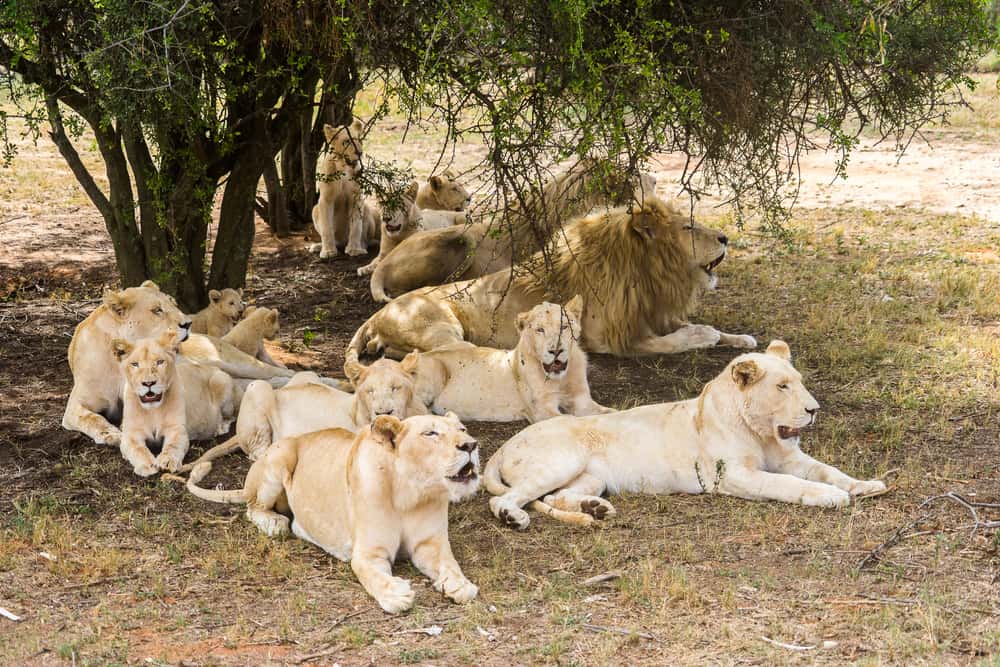 Although giraffe sounds were previously believed to be impossible for humans to hear, new research has suggested that they can make distinct hums, grunts, snorts, coughs, bleats, whizzing-like cries, and bellows. However, most of these sounds are particularly made by young giraffes except for nighttime humming made by adults. They also use subsonic sounds, infrasounds that humans can barely hear, to communicate. 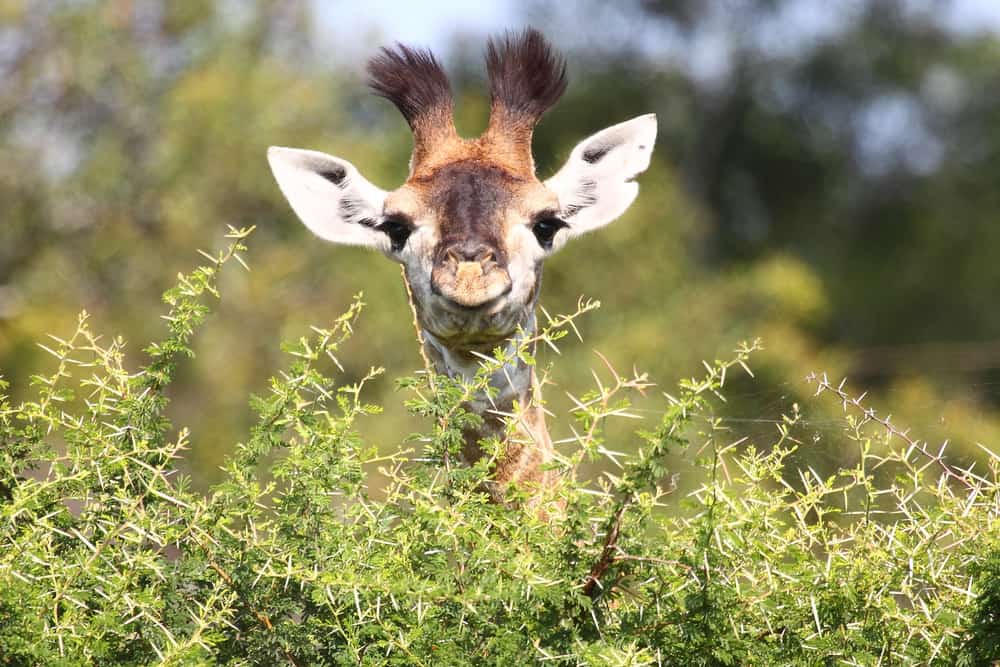 Well, aside from the popular roars of the lions, they can also make grunts, snarls, meows, purrs, hums, and moans. A roar/growl is made when they are angry or want to establish dominance. They can be combined with snorting sound which will obviously display the lion’s agitation. Lionesses purr and gnaw at each other while gentle moans, huffing, and puffing are made in a happy mood. Or when a lioness calls for her cubs. Apart from sounds, gestures are also part of their body language. Lions stand on their tiptoes, hunch their back and lift their tails to show dominance while a gentle bite to the neck shows they are unhappy with a subordinate member of the pride. 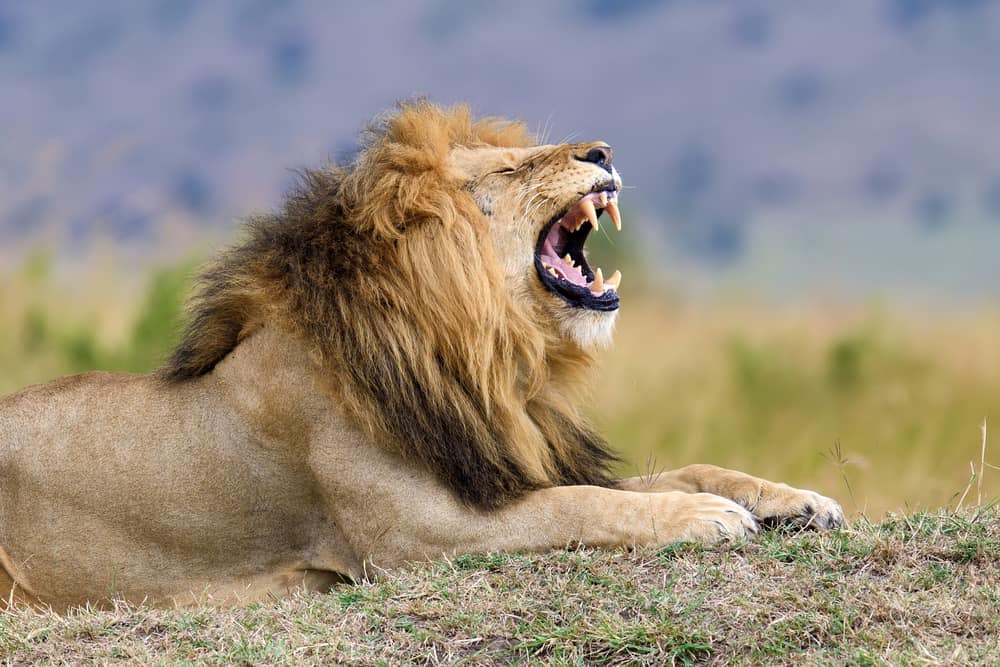 Giraffes are primarily herbivores, eating new shoots and leaves mainly from thorny acacia trees. They are also prodigious eaters as the males may consume up to 145 pounds (65kg) of food per day. 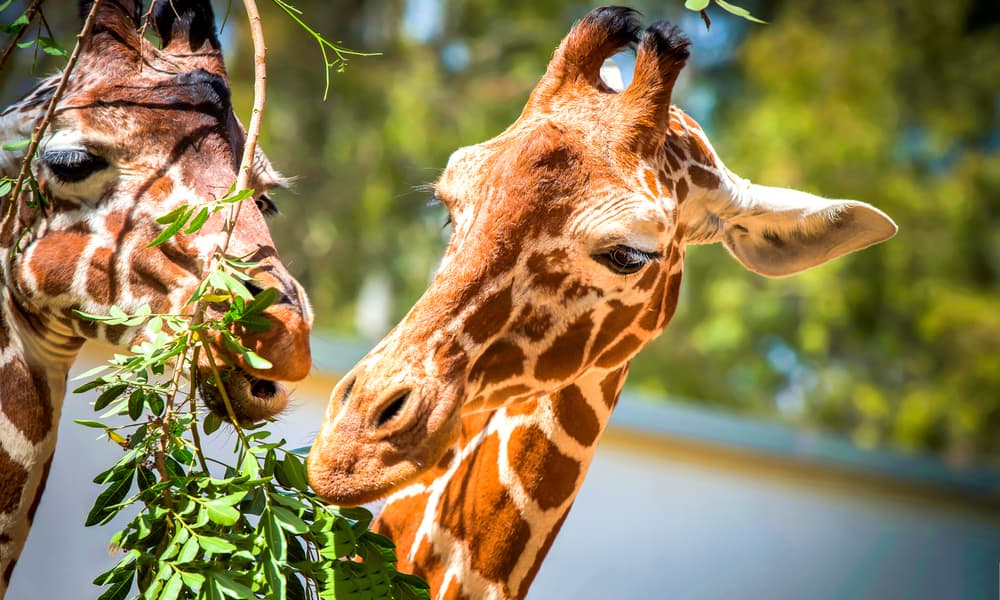 Lionesses predominantly prey on medium-to-large-sized hoofed animals ranging from zebras, antelopes, wildebeests, and sometimes animals as large as the Cape buffalo or the hippopotamus although with the help of the males who are equally adept hunters.

The giraffe’s legs are incredibly powerful, each supplemented with a 12-inch (30cm) hoof. Their kick can generate a force of 2000 pounds per square inch which is about the strongest kick ever recorded from a horse. 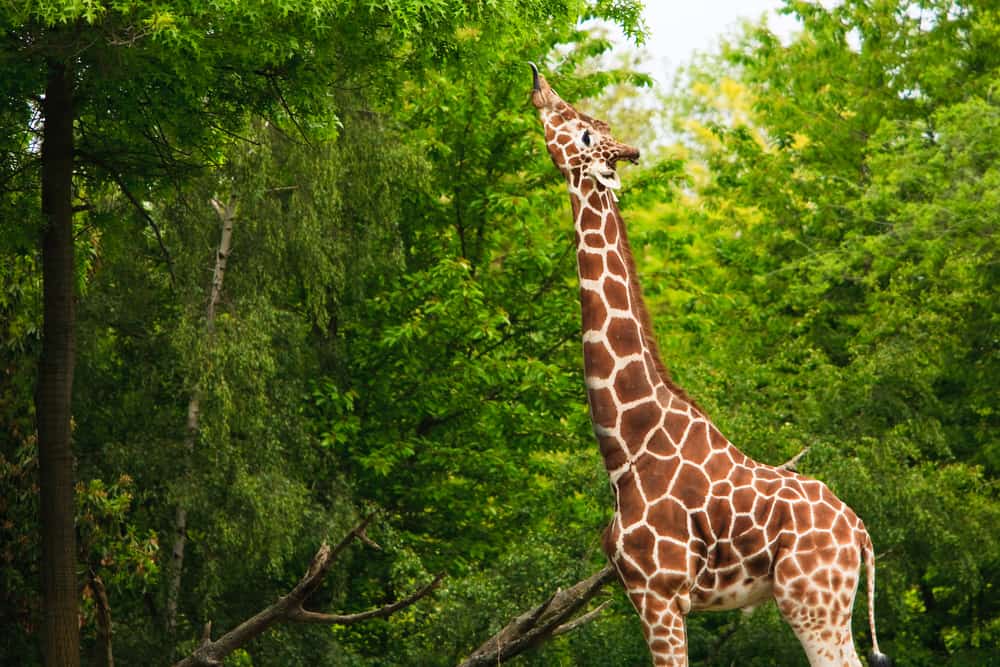 Besides their masculine physique, lions are damned with a bite force of 650 pounds per square inch, adorned with a set of 3-inch (10cm) canines to rip through skin and tear meat. 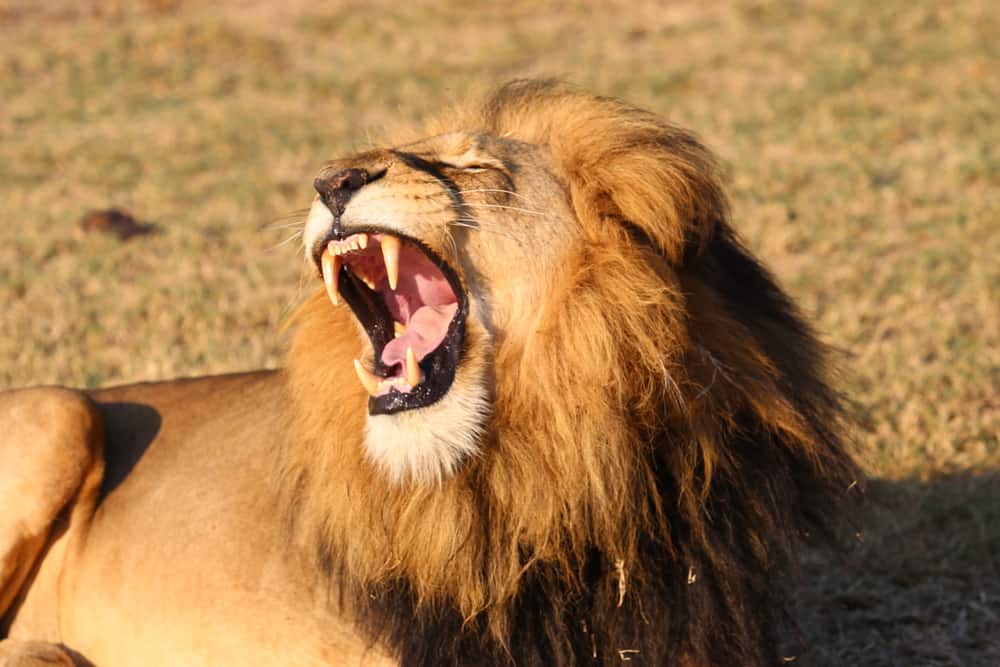 Giraffes can maintain speeds of up to 31 mph (50 km/h) for several kilometers but can attain 37mph (60km/h) over short distances. When running, they flex their necks to maintain balance. 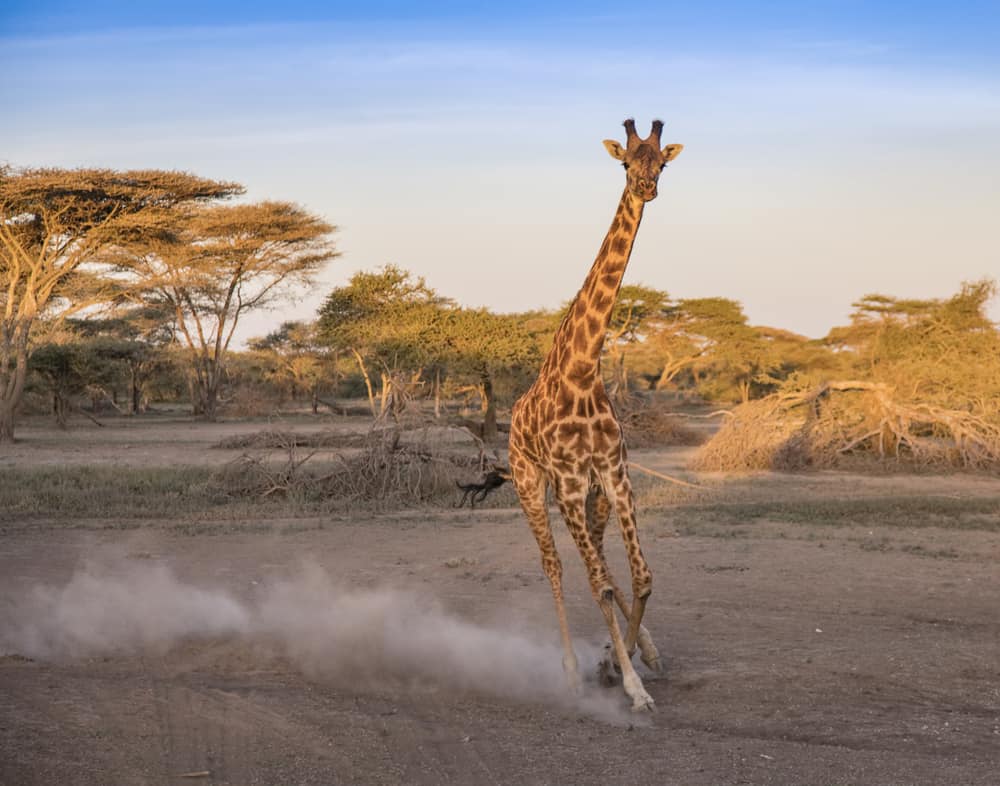 Lions can run fast reaching speeds of up to 50mph (80km/h) in short bursts due to their lack of stamina. They can also leap to a significant 36 feet. 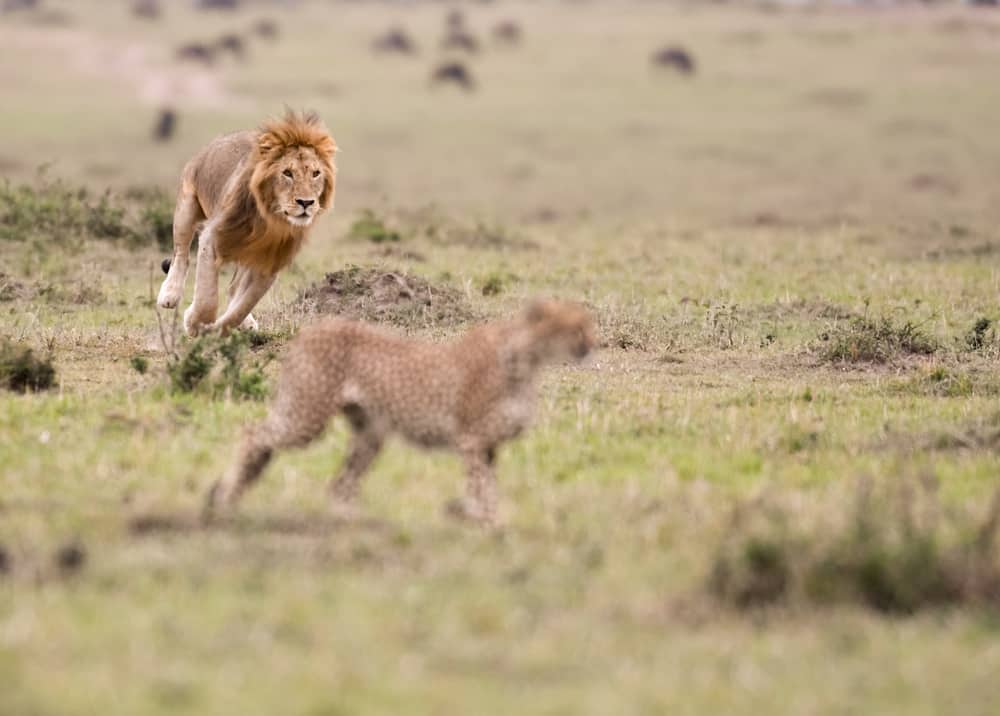 Though equipped to only fight against their equally taller males, giraffes defend themselves against predators by kicking with either their fore or hindquarters. Their large and heavy hooves are strong enough to break the back of the lion, as well as some ribs, and also crack their skull.

Lions are apex predators of the jungle. Their reputable ferocity precedes them. When faced by an adversary, their stature and roar alone are enough to scare away the enemy. However, for adamant contenders, their clawed paws and the heavy bite could save the day for them. 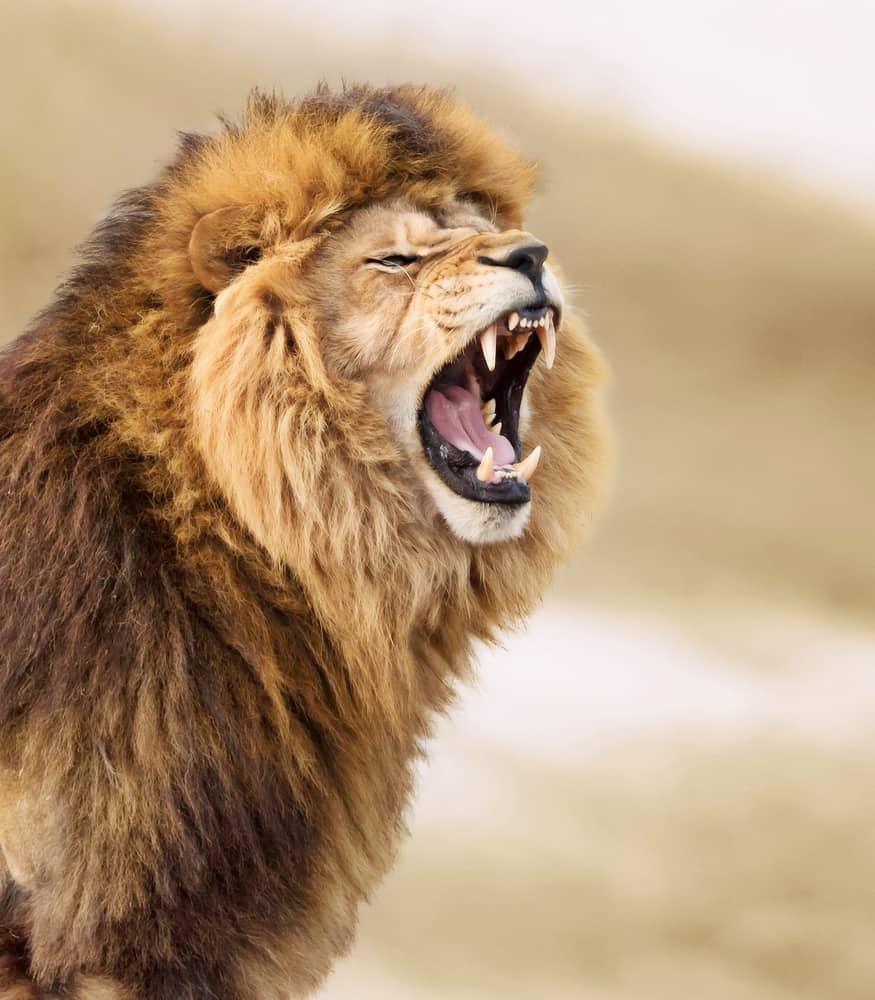 Can A Giraffe Kill A Lion? 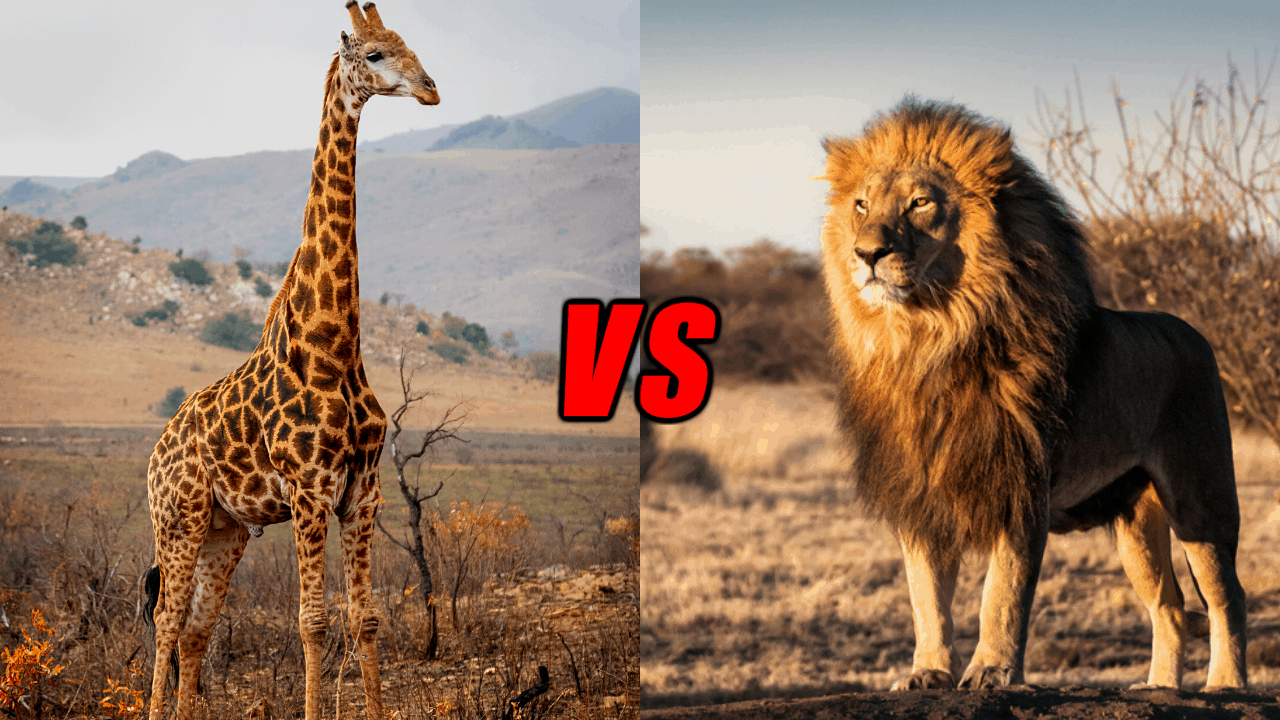 Well, yes. Scenes of giraffes killing a lion are more frequent than vice versa. Though the lion is the king of the jungle, taking on a giraffe is a highly risky move. Among other factors, the lion kills by suffocating their prey but the giraffe’s neck is too high unless when attacking young giraffes or sick individuals lying on the ground. But chances are minimal to such an encounter.

Under usual circumstances, a herd of lions would attack the giraffe, one by one, each with a relentless attempt to take him down. They pointlessly try to knock him off his feet by biting into the giraffe’s thighs but the lions’ efforts go down the drain. The giraffe manages to kick some members off him. Though his kicks are poorly aimed, a well-placed one could be fatal to a lion. As the others adamantly try to bite into his hindquarters by a hitch on a ride, the giraffe simply shakes them off and walks free. The tag could go on for several hours but the giraffe would still stand firm waiting for his opportunity to kick.

A giraffe is, therefore, no match for a lion whatsoever due to its colossal size and height. Also, the match could go ballistic since a rattled giraffe can easily finish off these felines by stomping on them.