The Philippine eagle is adorned with a long, brown tuft of feathers at the top of its head that forms a mane-like crest. It has yellowish-white to brown-white colored feathers on its nape as is the rest of its plumage. They have bluish-gray eyes and beak and yellow powerful legs with dark claws. Their underside and underwings are purely white. 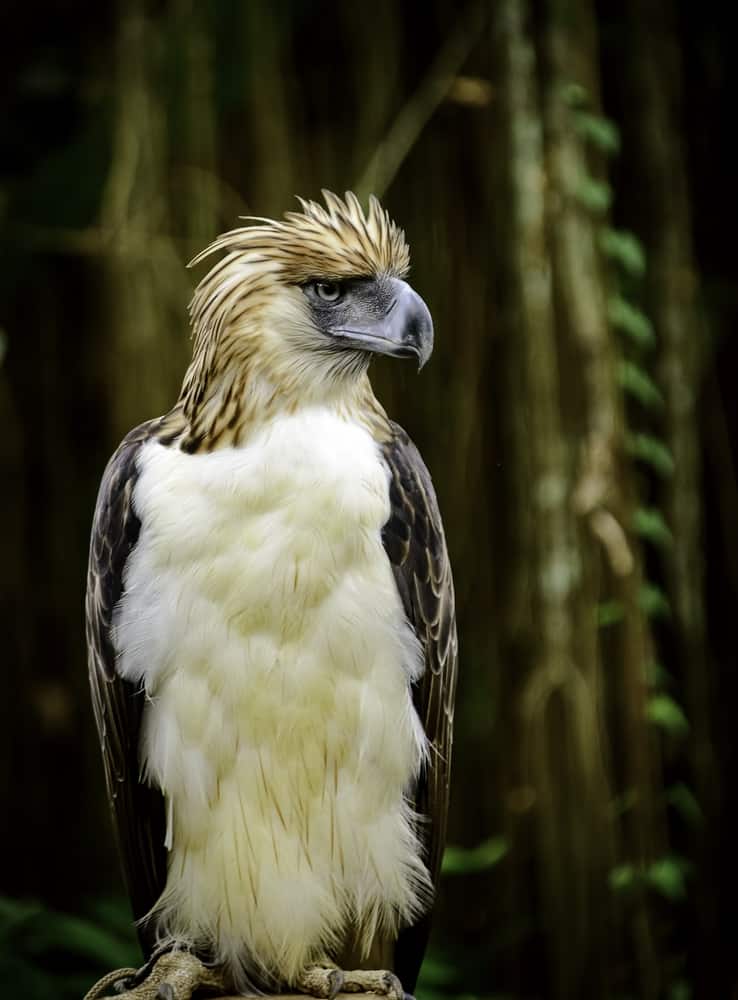 Golden eagles are characterized by golden plumage on their heads and napes. They have dark brown feathers, brown or hazel eyes, and yellow feet with dark talons. Juveniles have distinct white speckles on their tails and wings. 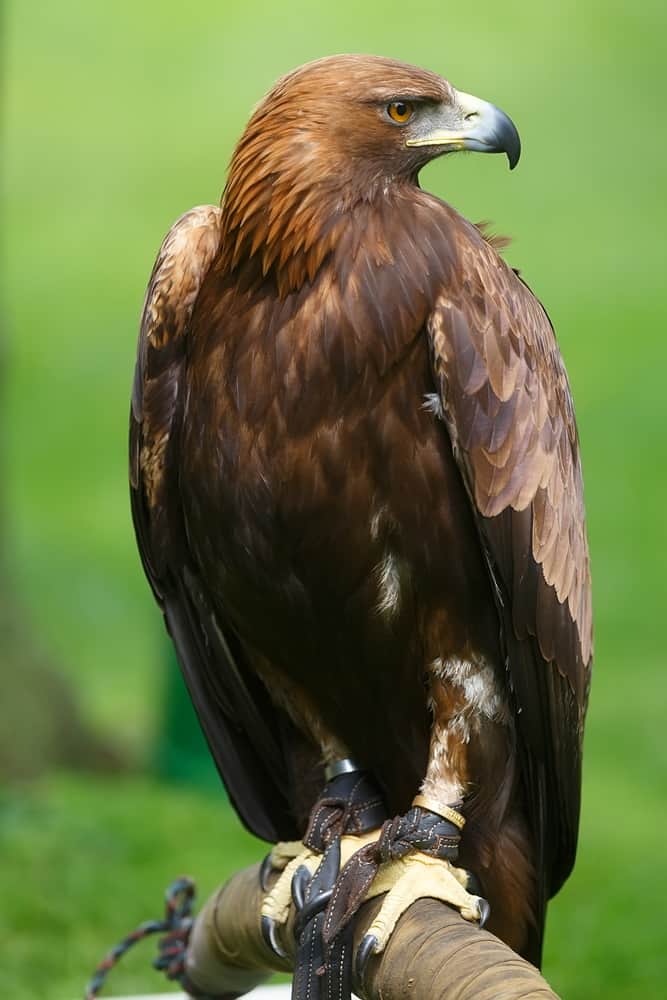 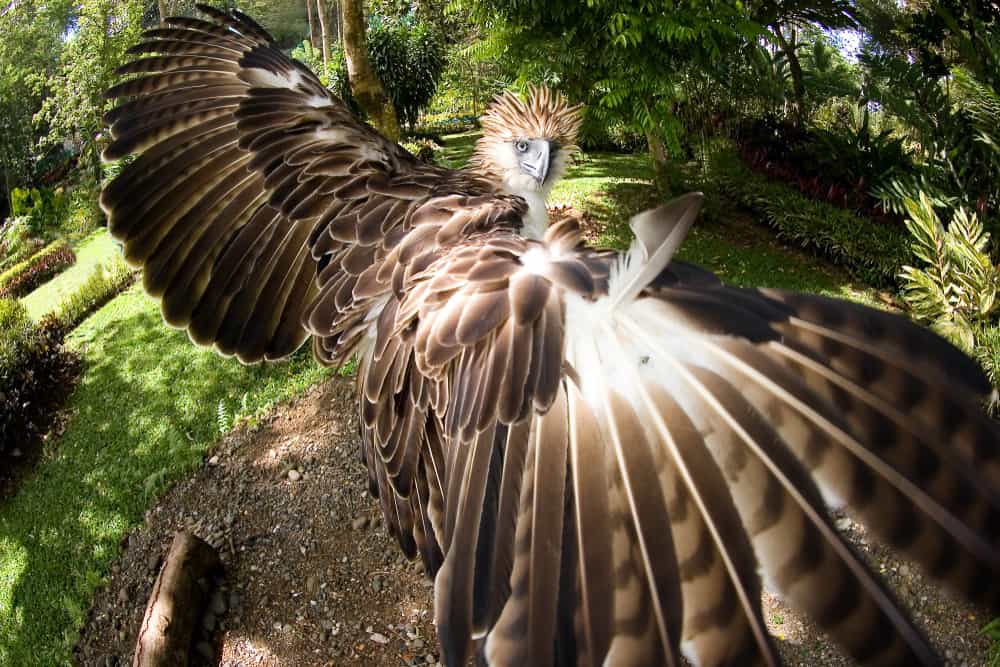 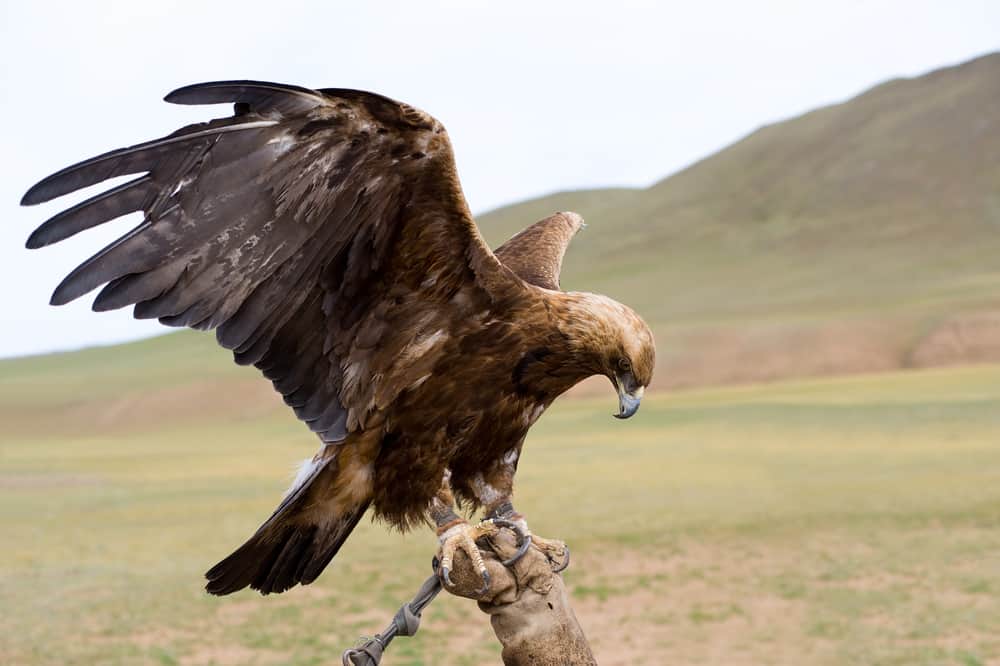 The Philippine eagle can only be spotted on four major islands in the Philippines, that is, the islands of Luzon, Leyte, Mindanao, and Samar. However, their largest population has been recorded on Mindanao with between 83 to 233 breeding pairs, 6 pairs on Luzon, 2 on Samar, and just a few on Leyte. 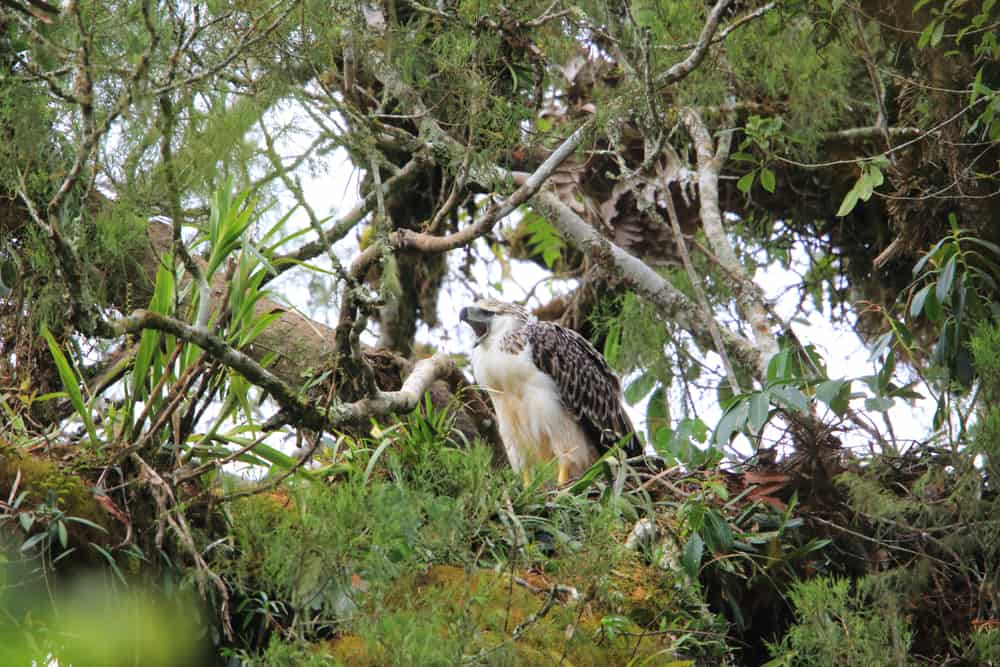 Their counterparts, the golden eagles, reside mainly in North America and Europe, some parts of northwestern Africa and Asia. They are occupants of open mountains, foothills, plains, and open country. Some goldens may migrate depending on their geographical location.

The life expectancy of a Philippine eagle in the wild is expected to be between 30 to 60 years. However, a captive in Rome Zoo was believed to have lived for 41 years while another in the Philippine Eagle Center had a record of 46 years. 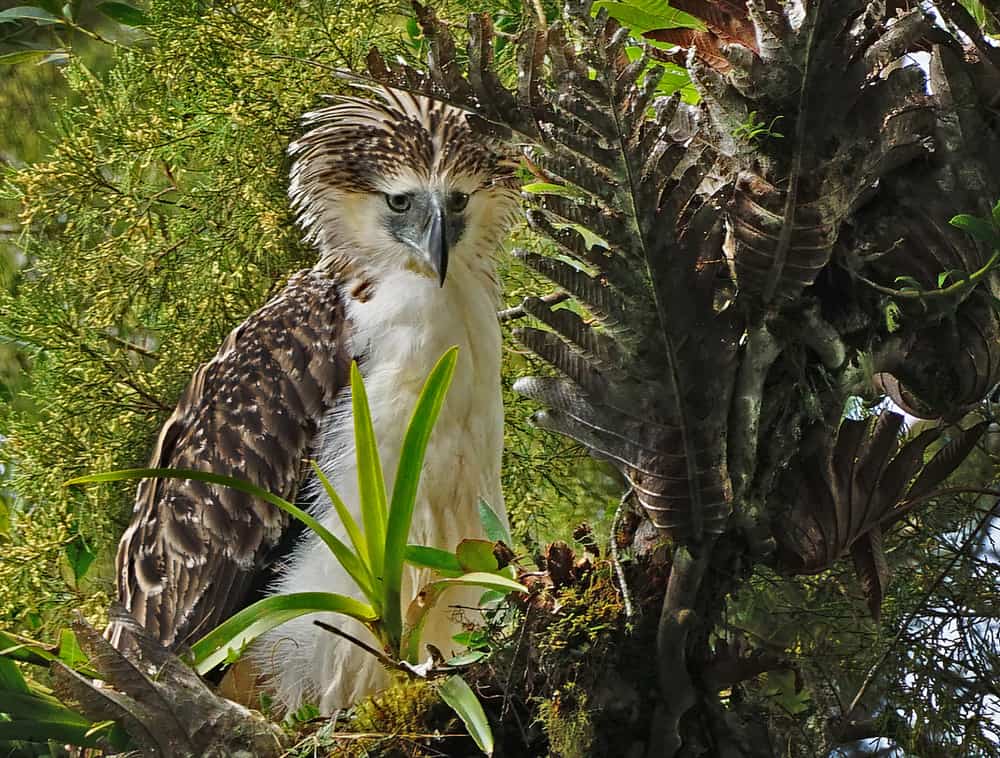 Golden eagles are long-lived as well and can achieve 30 years or more in the wild. The oldest in captivity was recorded to have a lifespan of 46 years. 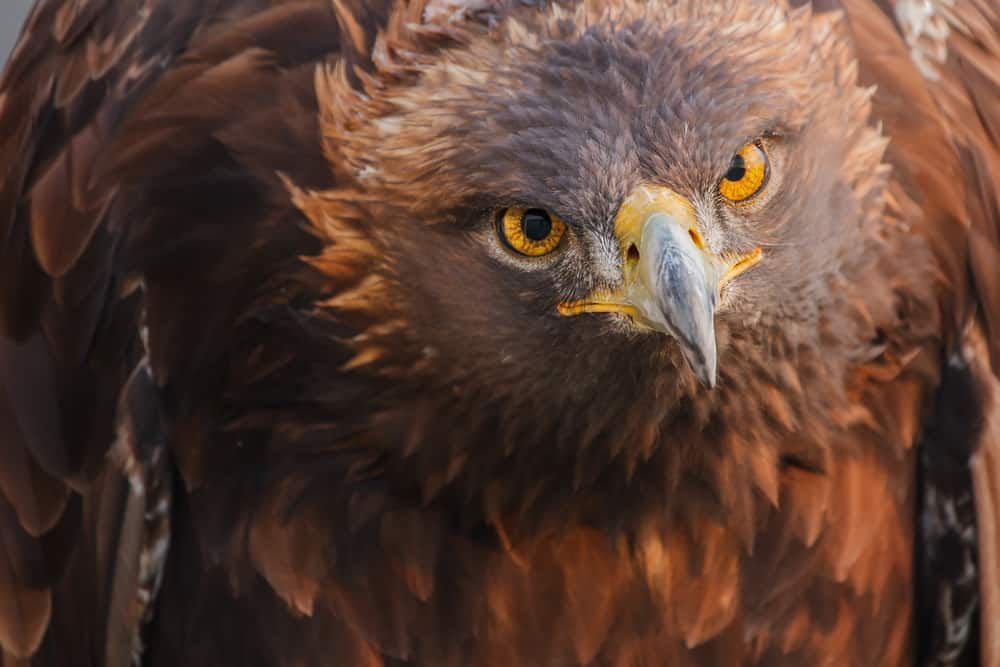 Philippine eagles are solitary and territorial birds of prey, each breeding pair requiring about 4000-11000 hectares of forest land to thrive in. They are reportedly a very loyal, monogamous species once paired to a partner, they choose to remain a couple for the rest of their lives. The couple raises their offspring together until they can survive on their own. Philippine eagles are loud raptors with distinct high-pitched whistles that end with rhythms in pitch. 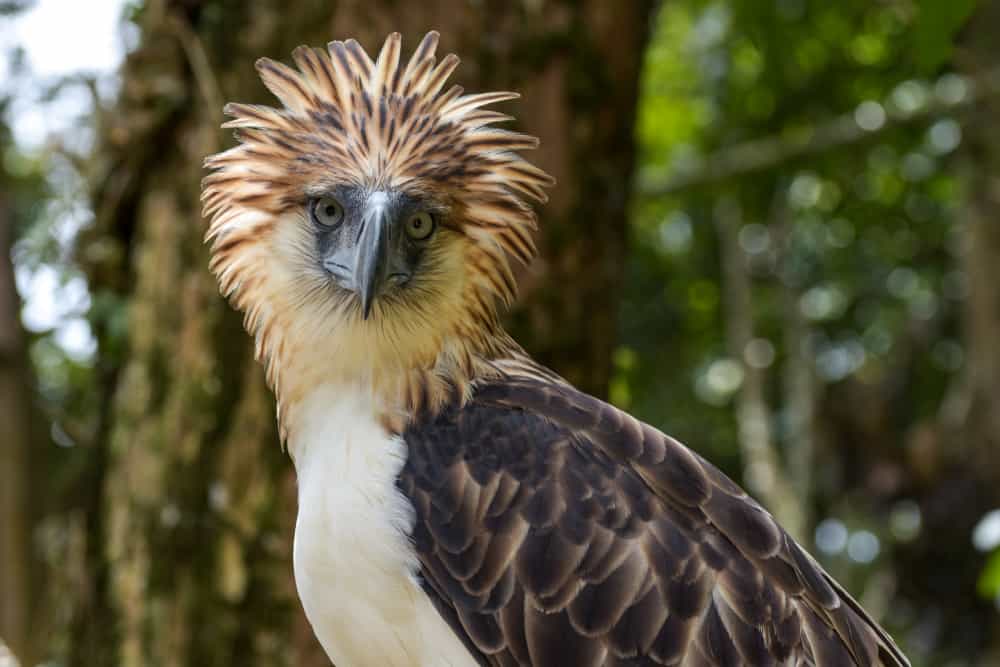 On the contrary, goldens are rather quiet birds but may occasionally produce high, whistled but weak sounds. They are also territorial, with each pair presiding over 60 square miles of land. Like their Philippine counterparts, they are monogamous although they may remain with their partner for only several years or other times for life. 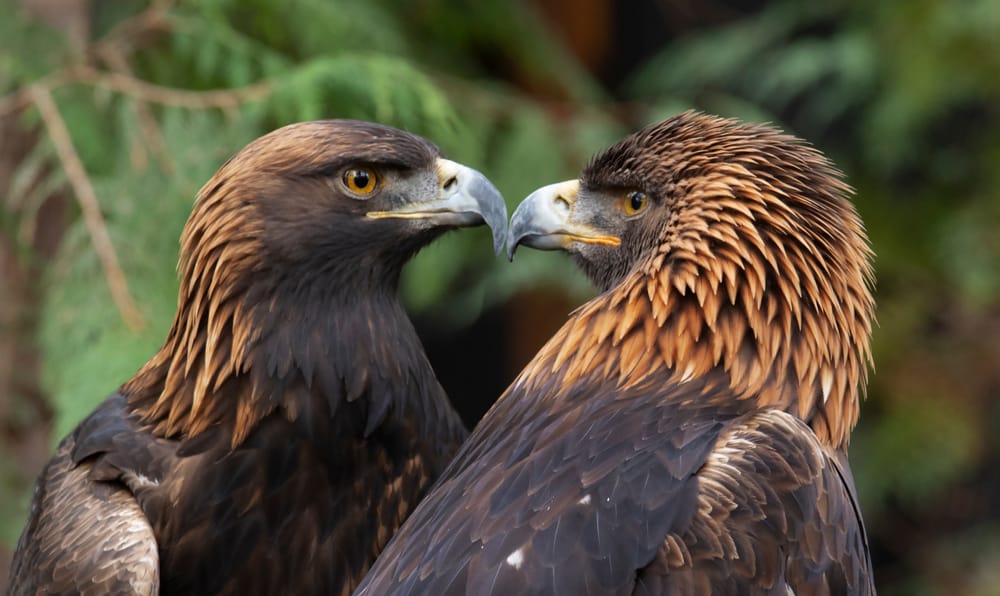 Vocalizations made by the Philippine eagle have been described to be loud and high-pitched whistles that climax with inflection in pitch. This is indicative of their fierce and territorial traits. Their calls seem rather weak for so large a bird. Juveniles let out a series of high-pitched begging calls as they await food deliveries from their parents.

Golden eagles also keep to themselves. Their occasional calls are usually high, weak, and whistled. The breeding season is accompanied by begging calls from nestlings that can travel a mile or more. In return, adult goldies announce they’re coming with a whip or a wonk. A series of yelping or mewing-type calls are given when they carry their prey to their nests. 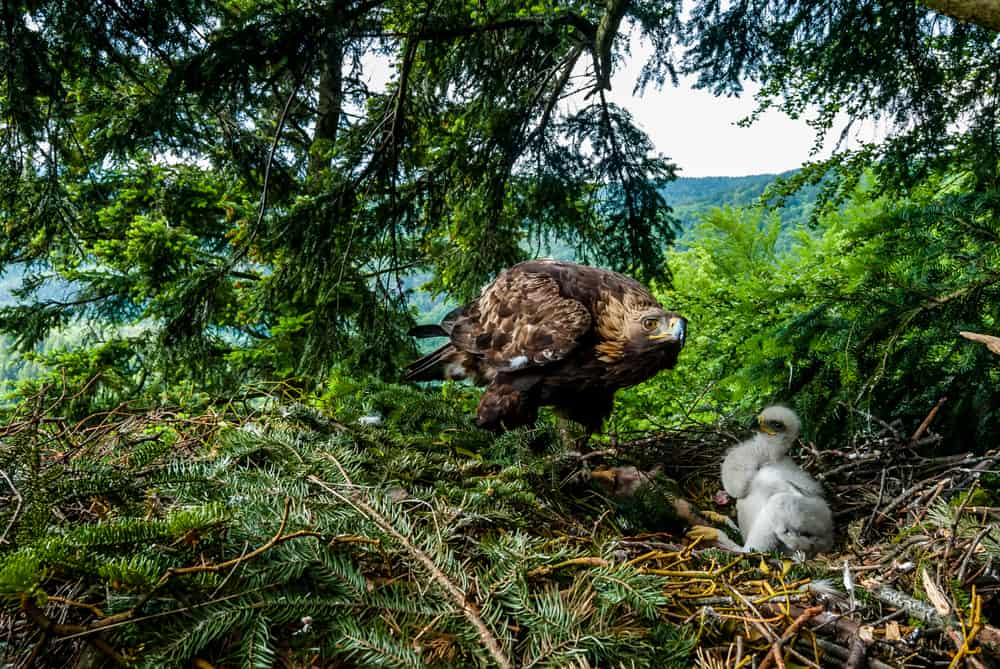 Formerly known as the monkey-eating eagle, the Philippine eagle has been known to prey on monkeys, flying foxes, flying squirrels, birds, tree squirrels, reptiles, giant cloud rats, and other birds of prey too. Flying lemurs, as well as young pigs and dogs, can also be on the menu. They either hunt by watching their prey activity while sitting motionlessly on a close-by branch or they can glide gradually from one perch to another in pursuit of prey. If their mission fails, they would fly up or circle back to the top of the trees and seek prey again. Though diurnal, their sharp eyesight enables them to hunt at night too. 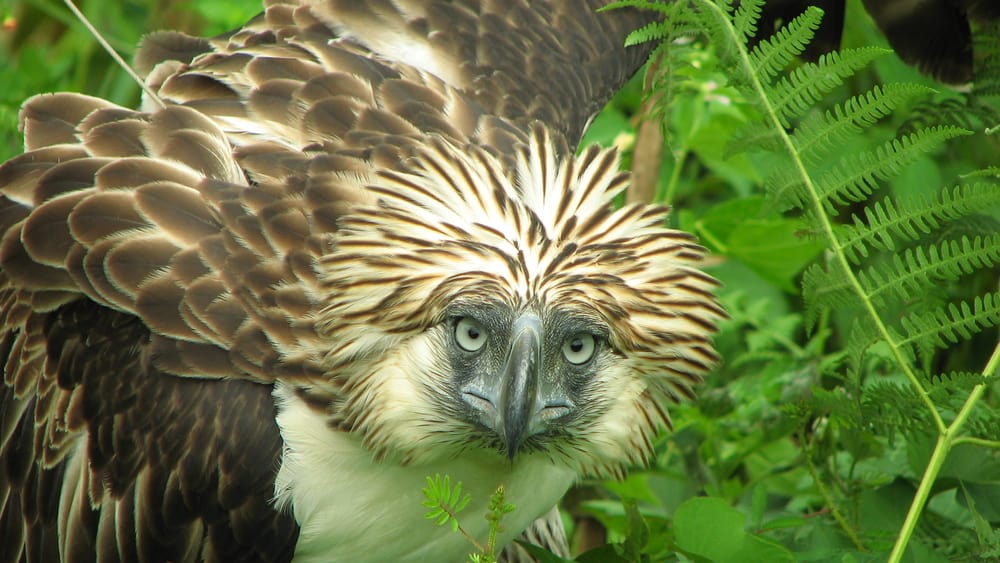 Golden eagles snatch up rabbits, marmots, ground squirrels, reptiles, fish, and can also eat carrion. Game birds such as grouse and cranes can also make a meal. When opportunistic enough, they can even attack full-grown deer. They search for prey by flying low over slopes or soaring high in the sky and once a kill is spotted, they plunge to capture it in their talons. A pair occasionally hunts together, where one acts as a distraction as the other captures the prey. 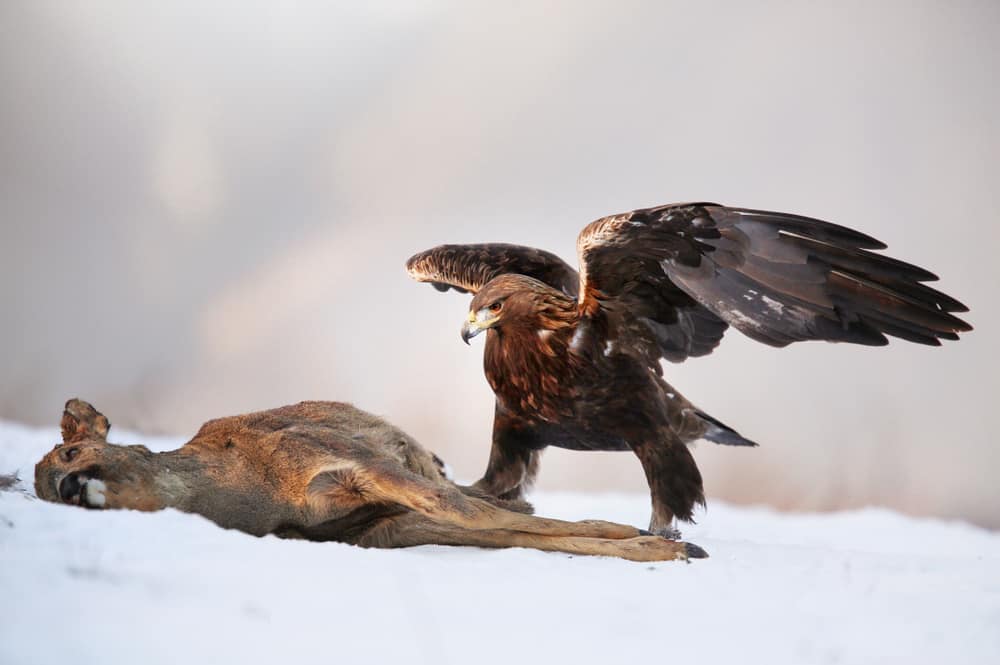 With a grip strength of about 530 pounds per square inch, the Philippine eagle could easily crush a human skull let its prey’s bones and spine. 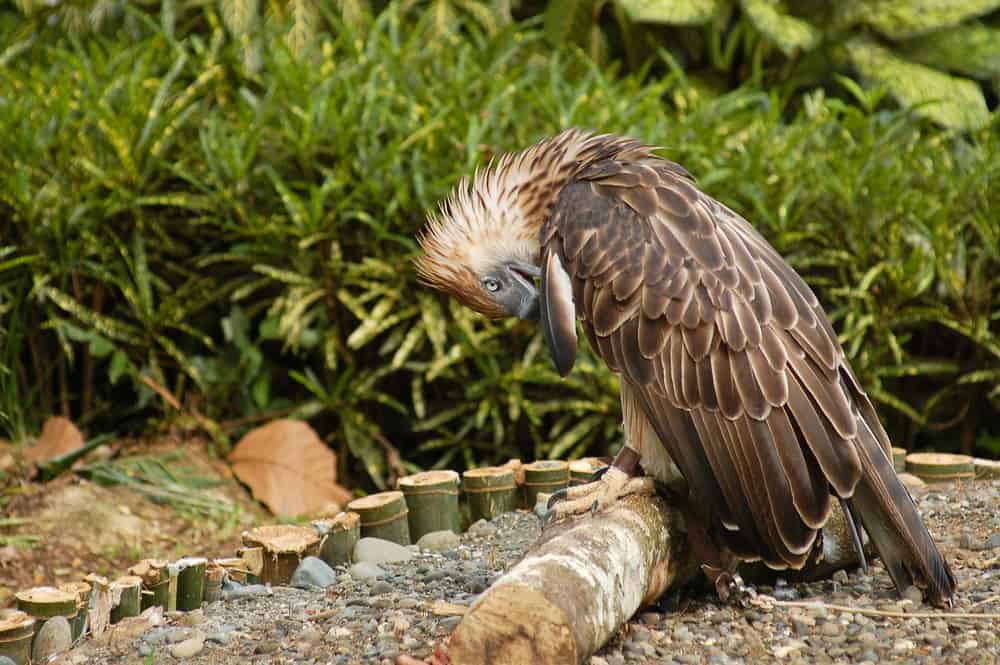 The golden eagle talons are known to have a grip power of about 400 pounds per square inch, Although not as high as the Philippine eagle’s, the pressure is about 10 times the grip of an adult human hand. 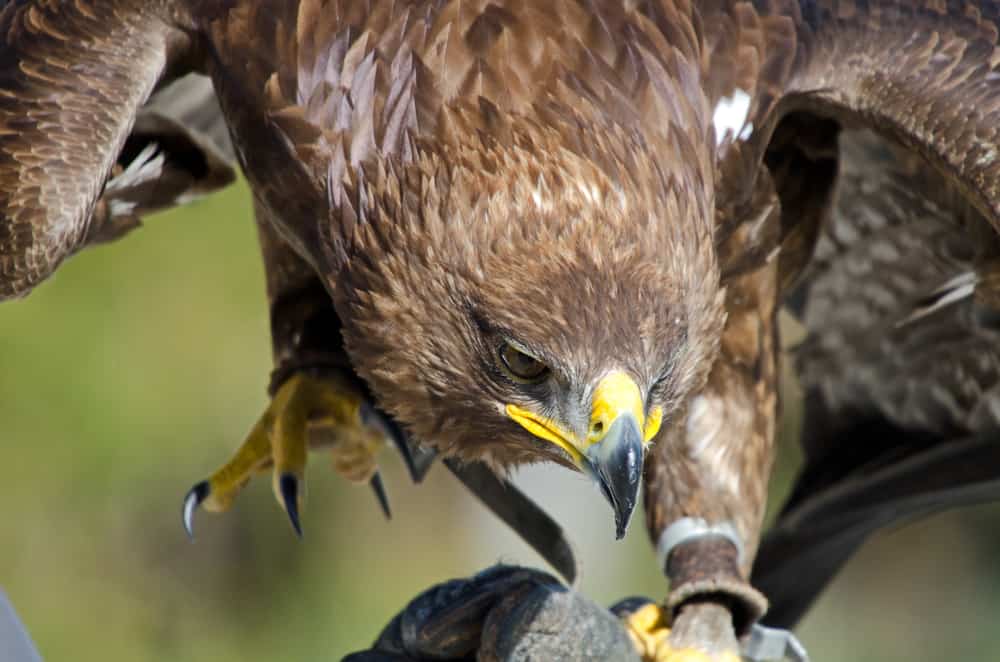 The golden eagle can reach a tremendous diving speed of 150 mph (241 km/h) as they certainly do not mess around with their food. They soar through the sky at an average speed of 32 mph (51 km/h). 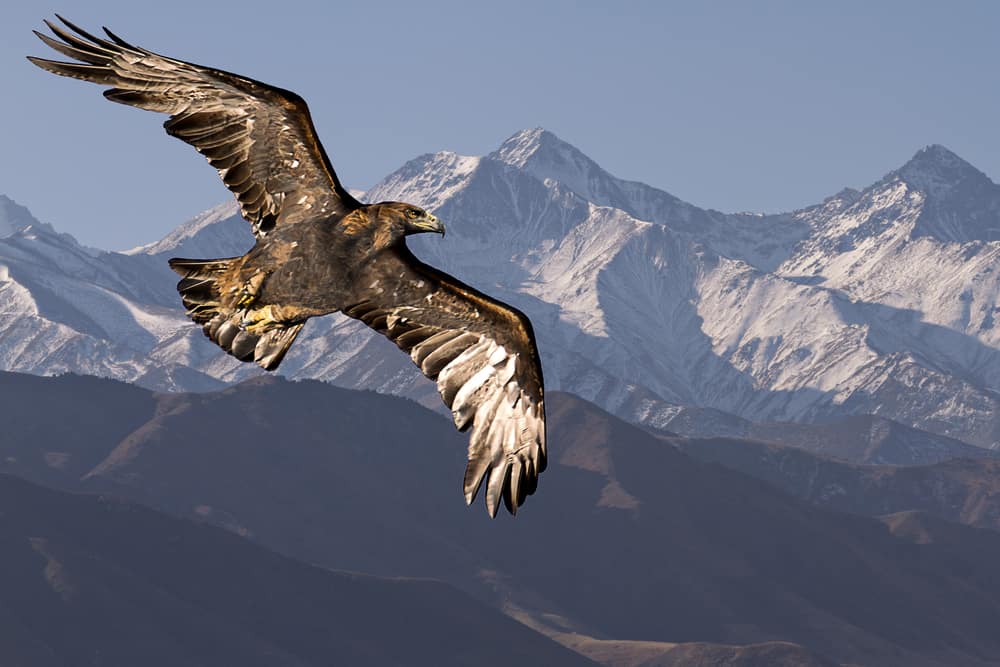 Although these eagles are at the top of the food chain and lack natural predators, other than humans, their ferocity, unparalleled beauty, and power precedes them. This bird of prey is equipped with strong, heavy legs with mighty talons which they use to attack. Also, their strong bills can tear through meat and crushed bones easily. 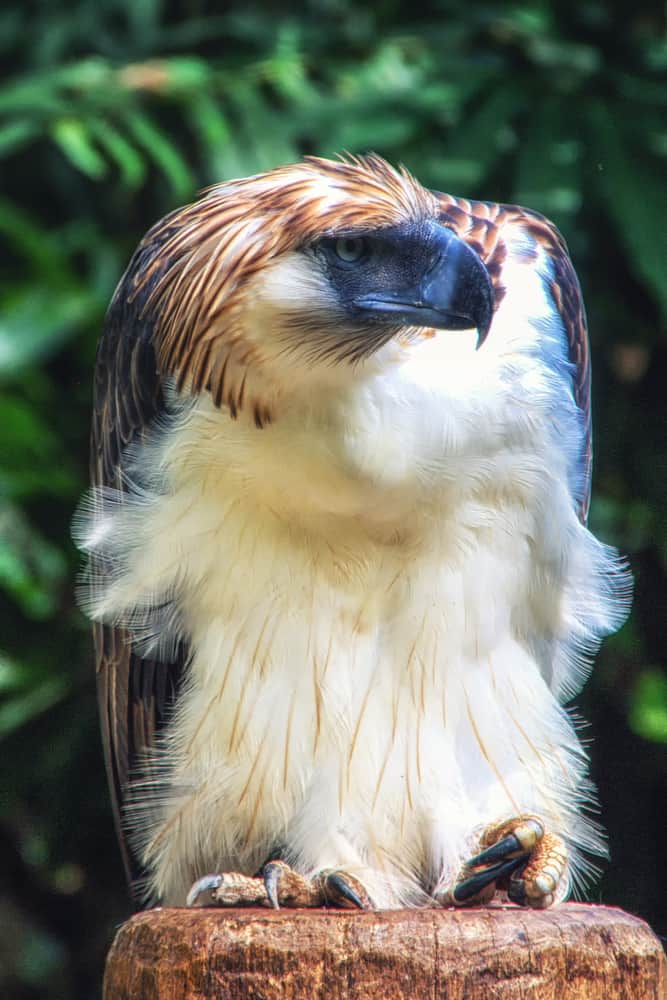 Golden eagles have an untamable ferocity, bold enough to launch at prey that is no match for their size. Their cunningness and intelligence of using stealth-like tactics when hunting make them formidable terrestrial hunters. 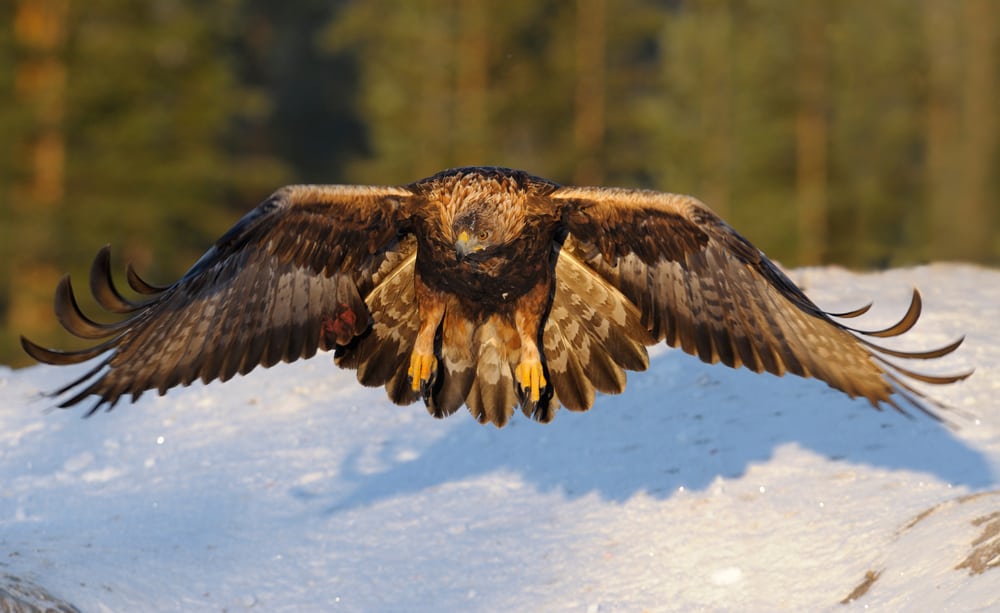 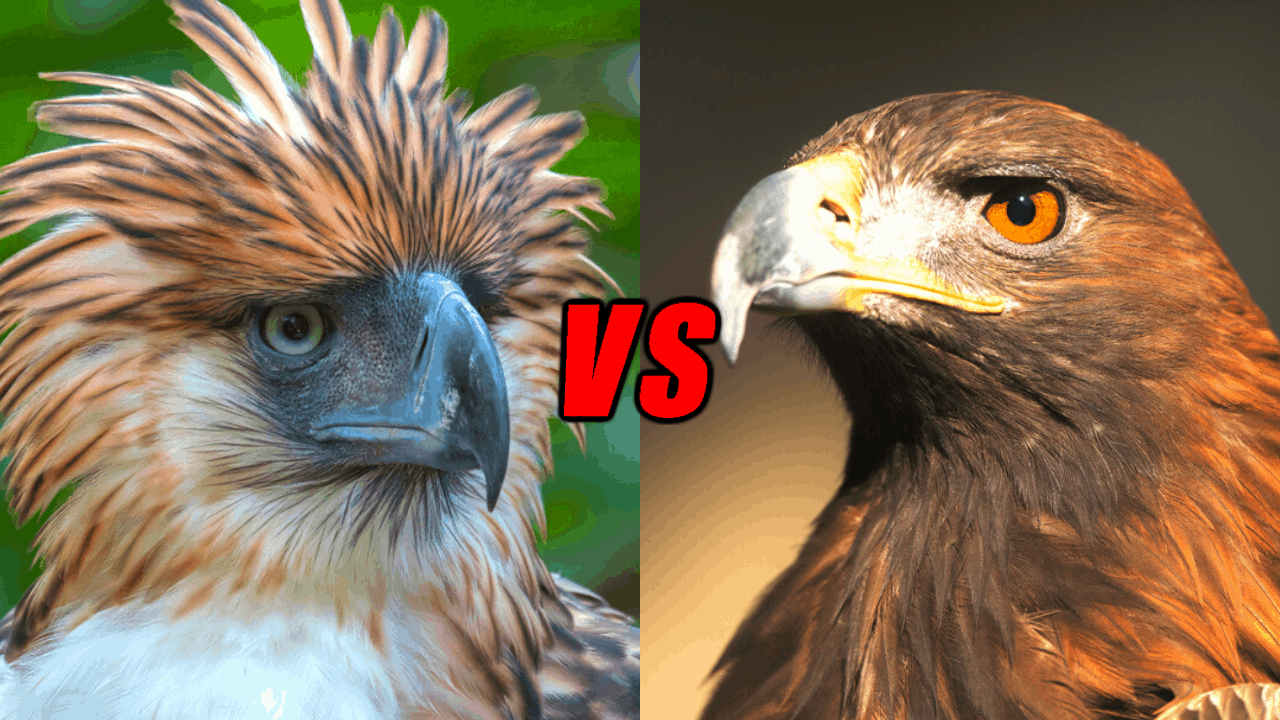 These two powerful birds of prey are found in different habitats. It is therefore without doubt that a fight is improbable.

Both birds are well equipped for terrestrial hunting and their physique is quite daunting compared to other birds of prey. Golden eagles have strong feet for pinning down their prey and crushing their spine. Though not as strong as the Philippine eagle’s talons, they are adamant at the sight of an adversary and would pursue the enemy unwaveringly, especially when defending their nests.