They say “In an eagle, there is all the wisdom in the world.”

The Philippine Eagle, one of the largest and most powerful of forest raptors, is a giant bird of prey that can only be seen nowhere but in 4 Philippine islands: the Luzon, Samar, Mindanao, and Leyte. Due to its rareness, most people have not heard of it, and even worse, some will never.

The Philippine Eagle is a reclusive and territorial creature requiring about 4,000-11,000 hectares of forest land to burgeon in the wild. It was named the national bird of the Philippines in 1995. 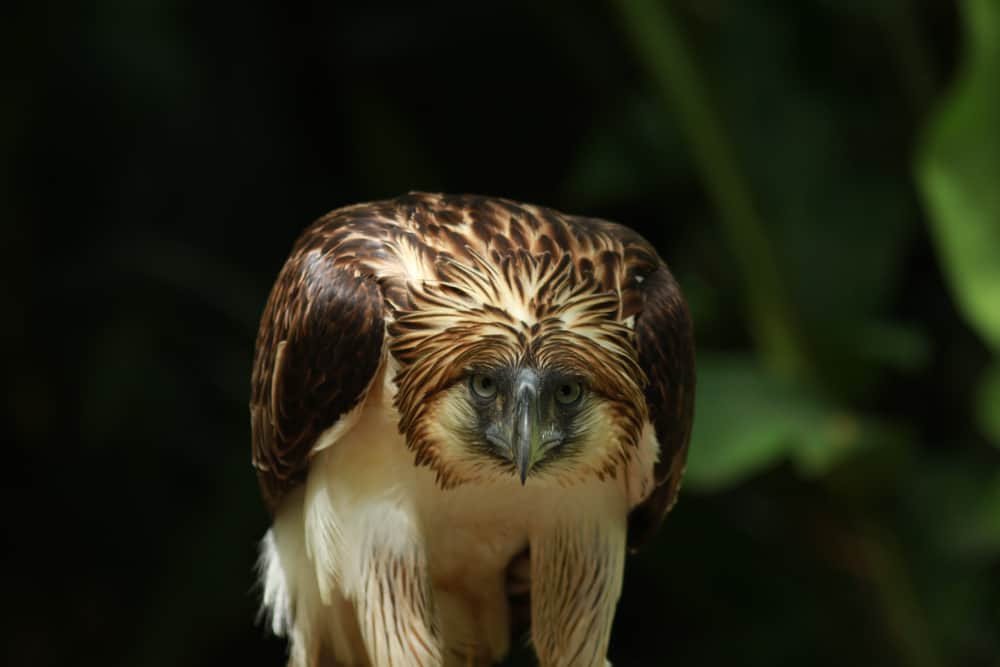 By the same token, the Bald Eagle has been the national emblem of the United States since 1782. It can be found wintering along rivers and reservoirs and locally in open dry country.

A number can be found along with waterside settings where prey is abundant, such as swamps in Florida, treeless islands in Aleutians, edges of conifer forest in southeastern Alaska, and Dessert Rivers in Arizona. 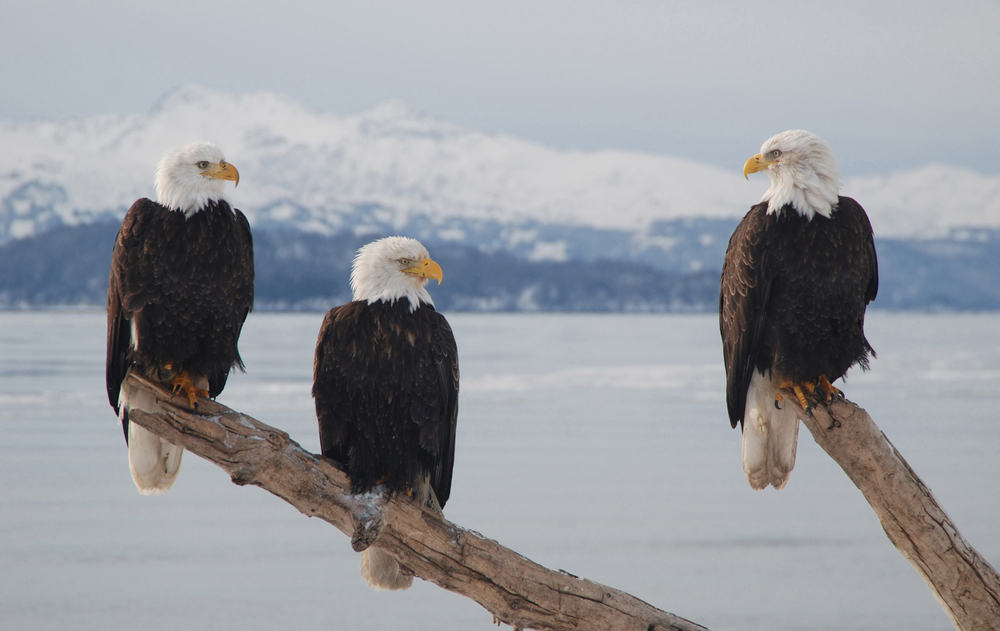 The Philippine Eagle has long crown feathers, a colossal arched beak, powerful, highly curved dark talons, and two bluish eyes with eyesight clearer than that of humans. They can see eight times the distance that the human eye can see. The brown feathers on its head resemble a lion’s mane. As it lives in the forest, many believe that its sightings indicate a balance in the ecosystem.

This powerful forest raptor can grow up to 3 feet and its wingspan can extend up to 7 feet. The female Philippine Eagle can grow 10% bigger, compared to its male counterpart, making it the largest surviving eagle in the world. The Philippine Eagle weighs from 4.5 – 8 kg, with females having a mean weight of about 6 kg and males 4.5 kg. It has the longest tarsus among the family of Accipitridae, reaching up to 5.7 in, while the beak measures 2.76 inches on average. Their tail is so long and can grow up to 16.5 – 17.8 in. Their sounds are loud and shrill, mirroring a whistle. The juveniles yell for food with a series of high-pitched vocalizations. 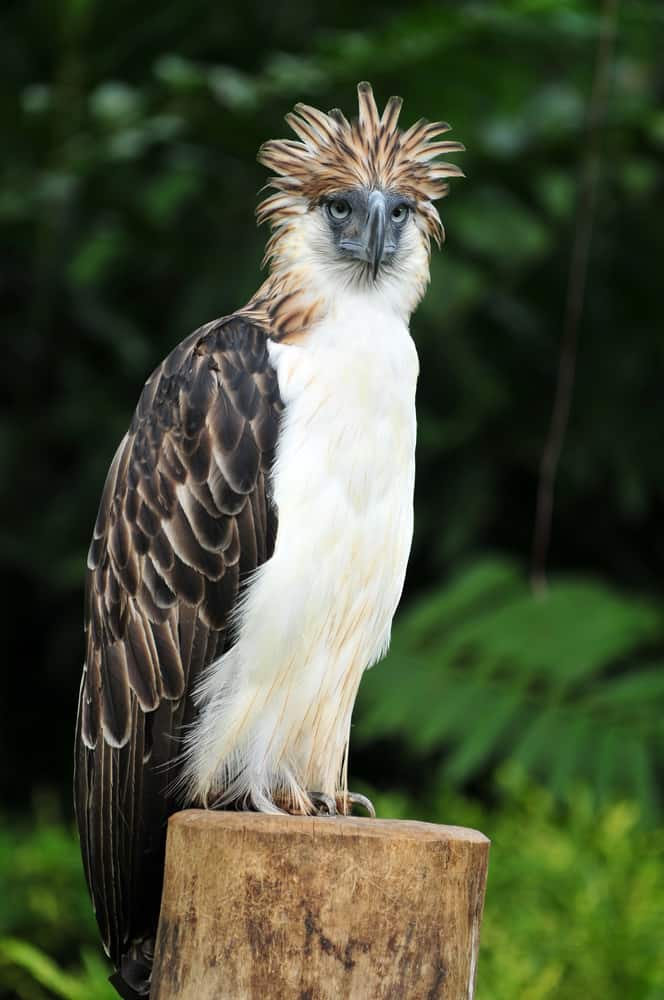 On the other hand, Bald Eagles have white heads and tails and dark brown bodies and wings. Their feet are bright yellow. They have acute eyesight and hold their broad wings flat like a board during flight. They are heavy-bodied, have a large head, and a long, hooked bill. The average size of a full-grown Bald Eagle is 30 to 32 inches and a wingspan of 6 – 7 feet.

Like the Philippine eagles, their females are considerably larger weighing up to 14 pounds while the males weigh a significant 7 – 10 pounds. Juveniles have a brown body with brown and white blotched wings. Their tails are also blotched with a dark band at the tip. The eaglets attain adult plumage in about 5 years. Bald Eagles let out a sort of high-pitched giggle or a weak scream that is mostly considered unimpressive. 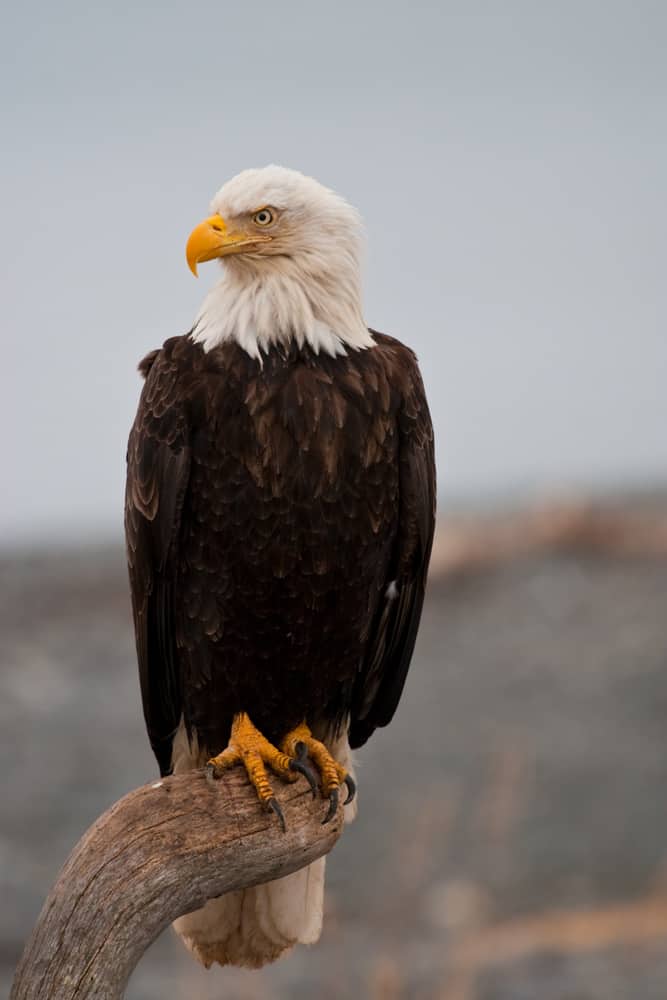 The Philippine Eagle hunts using two techniques; it can either observe its potential prey from a stationary position like on a tree branch or fly in circular motions between the hunting spots. It then flies down to lower branches seeking prey and if none comes in sight, it returns to its vantage point and repeats the whole ritual.

This method is most effective when hunting for flying lemurs and squirrels. The Philippine Eagles diet depends on the inhabited region. Their primary prey is the Philippine flying lemur, although they have been known to hunt palm civets, snakes, monitor lizards, and monkeys, hence the name ‘monkey-eating-eagles’. 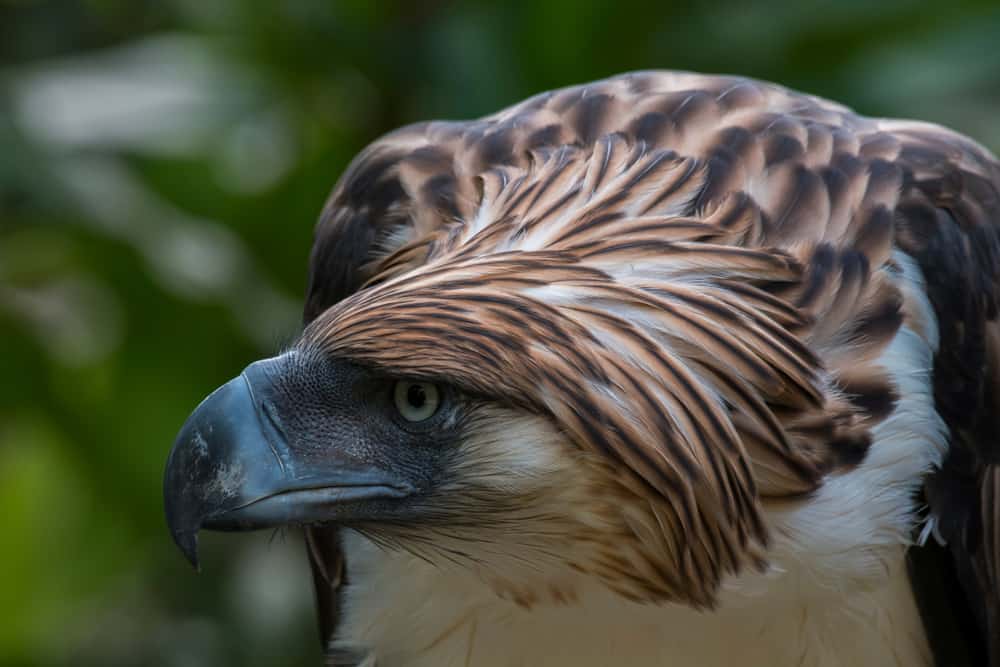 The Bald Eagle, on the other hand, is sometimes a predator, other times a scavenger. When hunting, Bald Eagles watch from a high perch and then swoop down to catch prey in its talons. They also hunt by cruising very low over sea or land, taking its prey by surprise.

They scavenge for meals by harassing other birds or by eating carrion or garbage. Their diet is mostly fish, but when fish are scarce, they may eat birds such as ducks, coots, auklets, or mammals such as jackrabbits and muskrats. They are also known to eat turtles, crabs, and shellfish. 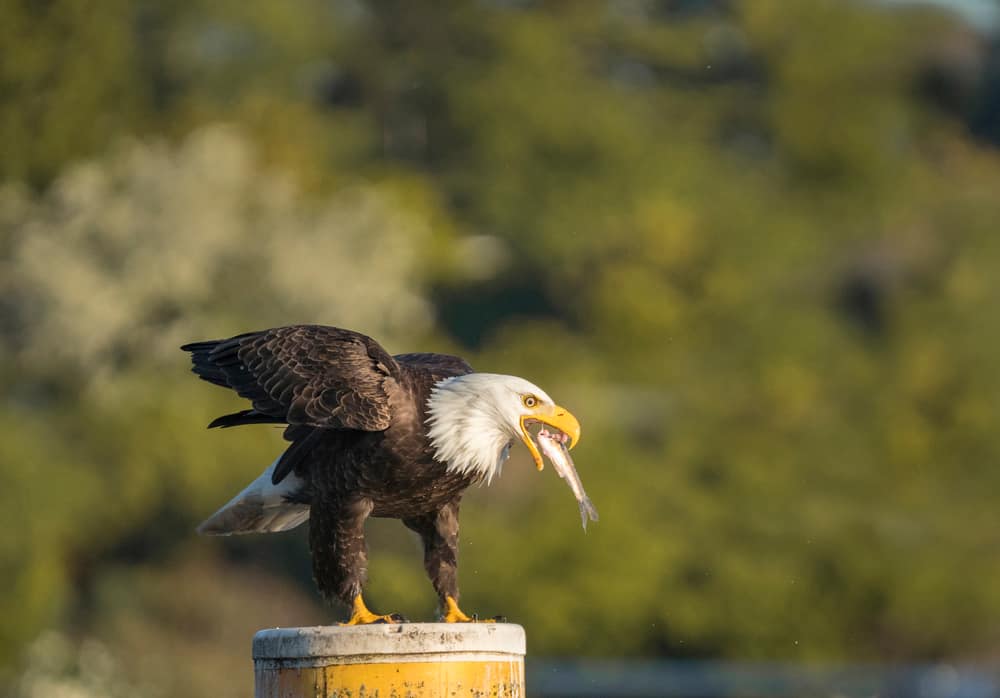 The female Philippine Eagle reaches sexual maturity at least 5 years while males reach it at 7 years of age. This eagle is purportedly a monogamist and very loyal. Once paired, they choose to remain a couple for the rest of their lives, although, if one partner dies, the other pursues a new one.

The male Philippine eagle pursues the female and after the ‘catch’ it demonstrates its talons. Mating begins with building a nest where repeated copulation will take place inside and outside. The female lays a single egg every two years, whose incubation period is 58 to 60 days. Before another egg is laid, parent eagles ensure that their offspring can survive on their own. 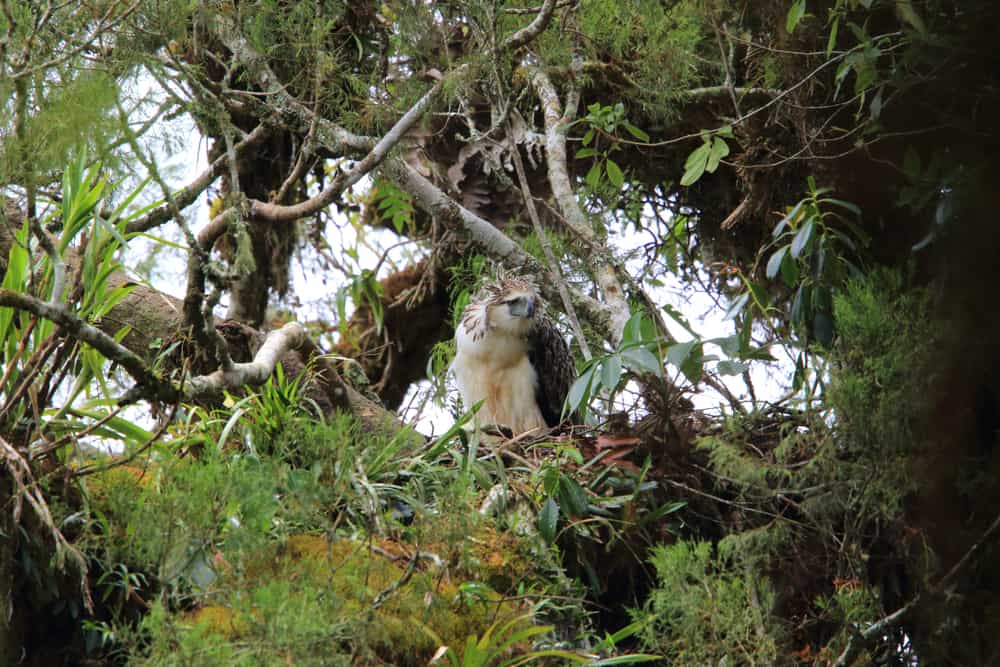 Similarly, the Bald Eagles begin breeding at 4-5 years of age and may mate for life. Mating begins by building a nest together, usually in a tree, on a cliff, or on the ground. They hold the record for the largest bird’s nests. The female lays 1-3 white eggs whose incubation, by both parents, takes 34-36 days. For the first two weeks after hatching, one parent remains with the young almost constantly as the other brings food. In seasons where food is scarce, only the largest young may survive. 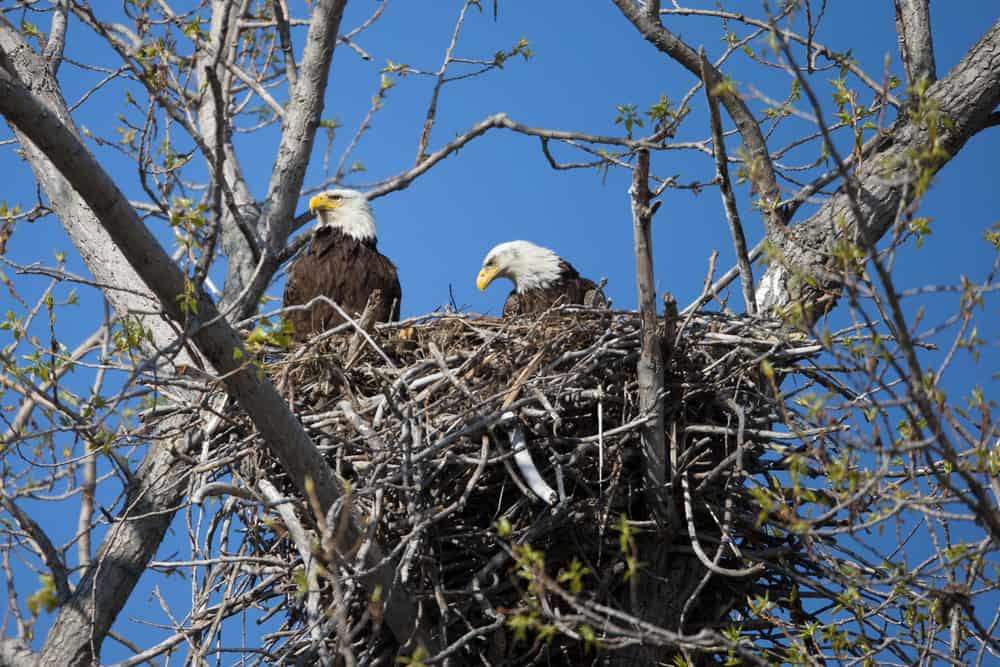 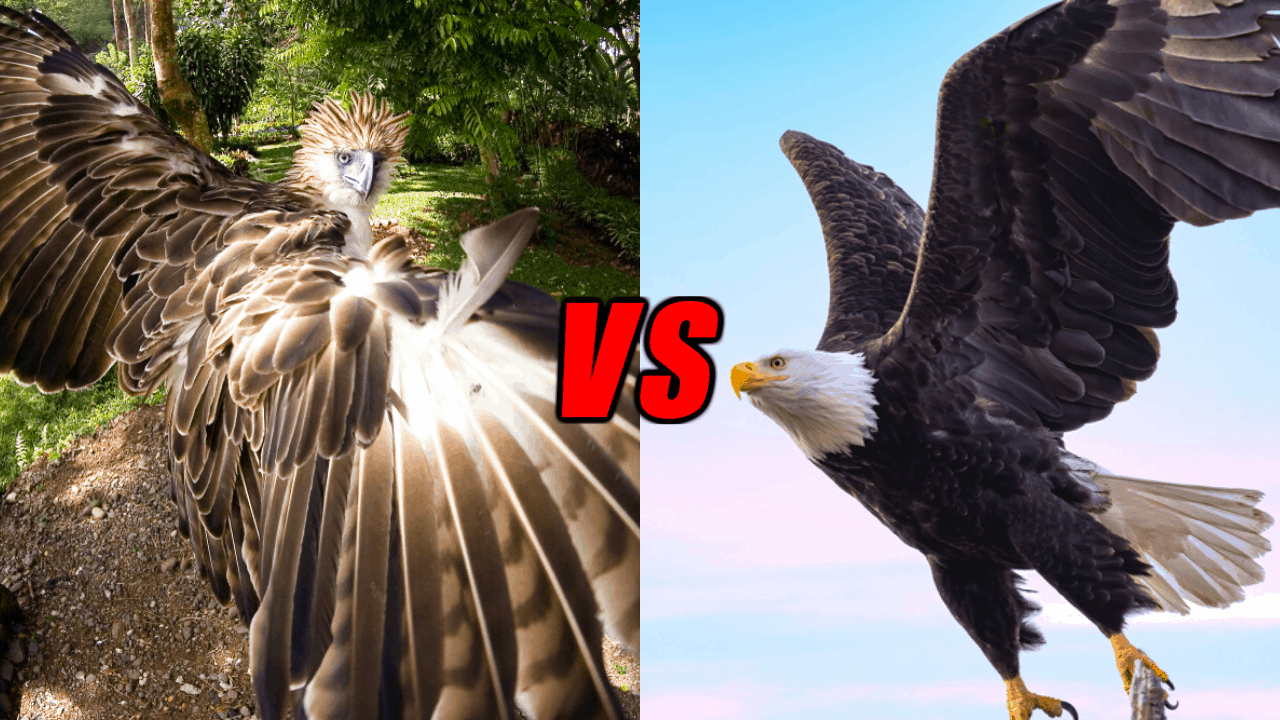 A battle between these two powerful birds will be intriguing but due to their discrete habitats and surroundings, they are never known to have met. Regardless, the two birds are highly sturdy and strong. However, on a flight, the Philippine eagle can fly up to 150mph driving speed while the Bald Eagle can go up to 75mph. Due to this and other contributing features, the Philippine Eagle can be considered dominant over the Bald Eagle. But this does not mean the Bald Eagles are weak. They have high defence mechanisms when endangered. Although, the Philippine Eagle may win if they go head to head.

The Philippine eagle’s lifespan is 30-60 years while that of the Bald Eagle is 20-30 years but some have lived up to 50 years in captivity. The existence of both eagles has been endangered through deforestation, shooting, and pollution. Over the decades, their population has declined greatly. Since they’re at the top of the food chain, caring for our environment will protect these extraordinary raptors.