The Boston Terrier is a lively, compact yet sturdy canine that is usually distinguished by its “tuxedo jacket” which earned this breed the nickname “American Gentleman.”

With this smart, funny companion in your house, there will surely be no sad and boring days.

Judge, the very first Boston Terrier that was bred in Liverpool in the 1870s, is considered the ancestor of all Boston Terriers we know today. Judge is a crossbreed between an English Bulldog and an English White Terrier. Once shipped in the U.S, it was bred with various breeds, including French Bulldog to reduce the size of this breed.

In 1889, Boston Terriers became extremely popular and the Boston Terrier Club was formed. In 1893, it became the first non-sporting dog breed to be recognized in the U.S by the American Kennel Club. The Boston Terrier is also the official state dog of Massachusetts since 1979.

While this dog was originally bred to become a ferocious pit-fighter, most of its aggressive personality was lost due to its cheerful and friendly temperament. Now, this dog is recognized as a sweet and funny family companion.

The Boston Terrier has a short, smooth, shiny, straight coat that is fine in texture. It has white markings in proportion to either black, brindle, or seal color which gives this dog the look of wearing a tuxedo.

The head is in proportion to its size, with erect ears and a flat-nosed, wrinkle-free face. Its eyes, big and expressive which greatly adds to this breed’s already wonderful looks. It has a slightly undershot bite which gives it the “pushed in” appearance.

This dog has a broad chest, and a muscular, boxy appearance. Its tail is short – not exceeding two inches long. 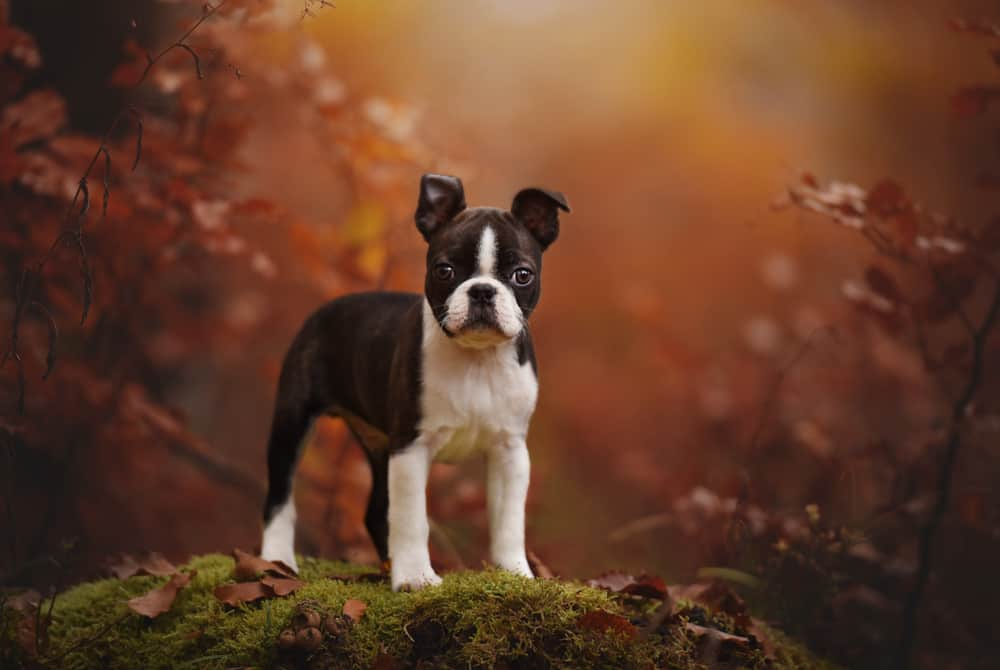 The Boston Terrier is divided into three weight brackets: less than 15 pounds, 15 to 19 pounds, and 20 to 25 pounds. According to international breed standards, this breed should not weigh more than 25 pounds.

This dog generally stands between 12 to 17 inches at the shoulder. Usually, males are taller than females. Nevertheless, Boston Terriers should always look athletic, never weak, and skinny. 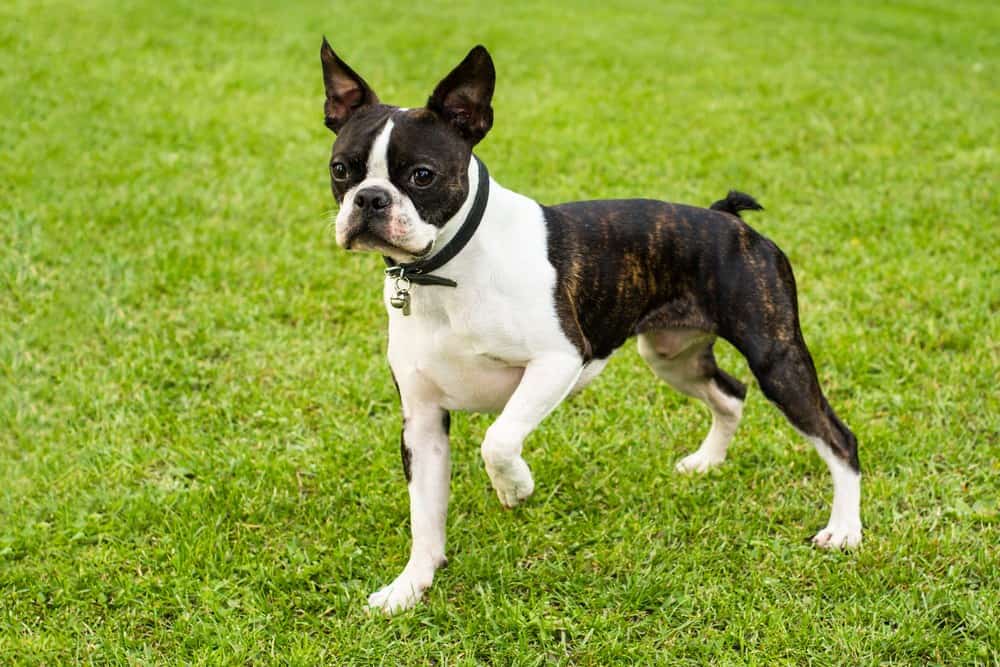 On average, Boston Terriers live around 11 to 13 years. In some cases, some can live up to 18 years. The major cause of its low life expectancy is its short nose, which often causes breathing problems in adulthood.

The Boston Terrier sheds minimally which are easily maintained through regular brushing with a firm, bristle brush.

Baths are only done when necessary, although its face should be washed every day because of their large eyes that are prone to dust. After washing, check its eyes for any signs of redness or irritation.

The Boston Terrier’s bright and charming personality, combined with its expressive, round eyes easily captivates every people’s heart, although sometimes this breed can be really stubborn so early training and socialization is a must to help this dog grow into a well-behaved and well-mannered pet.

This breed easily gets along with children, the elderly, and other pets in the house if properly socialized. However, Boston Terriers also has a tendency to be overprotective of their owners, leading to aggressive behavior towards strangers. 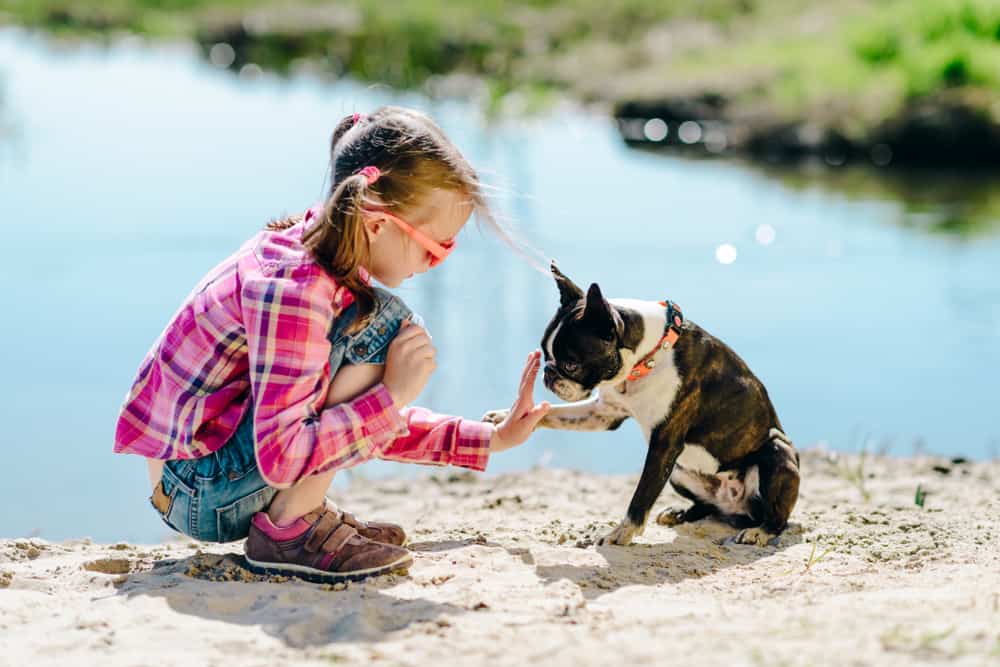 According to American Kennel Club (AKC), Boston Terriers are highly intelligent, therefore can be easily trained. Although intelligent, this dog can also be stubborn. It may know all commands but will refuse to follow them if it wants to.

You may not believe it, but in history, Boston Terriers are originally bred to be a ferocious pit-fighter. But today, we know this dog as a lover and an excellent companion.

This breed is popular in all sorts of canine sports, such as agility competitions, rally obedience, tracking, flyball, dock diving, weight-pulling, and many other sports. It can move really fast and should never be let outside without a leash.

Aside from its proficiency in canine sports, Boston Terriers is also known for being a therapy dog due to its extroverted personality and eagerness to meet new acquaintances. 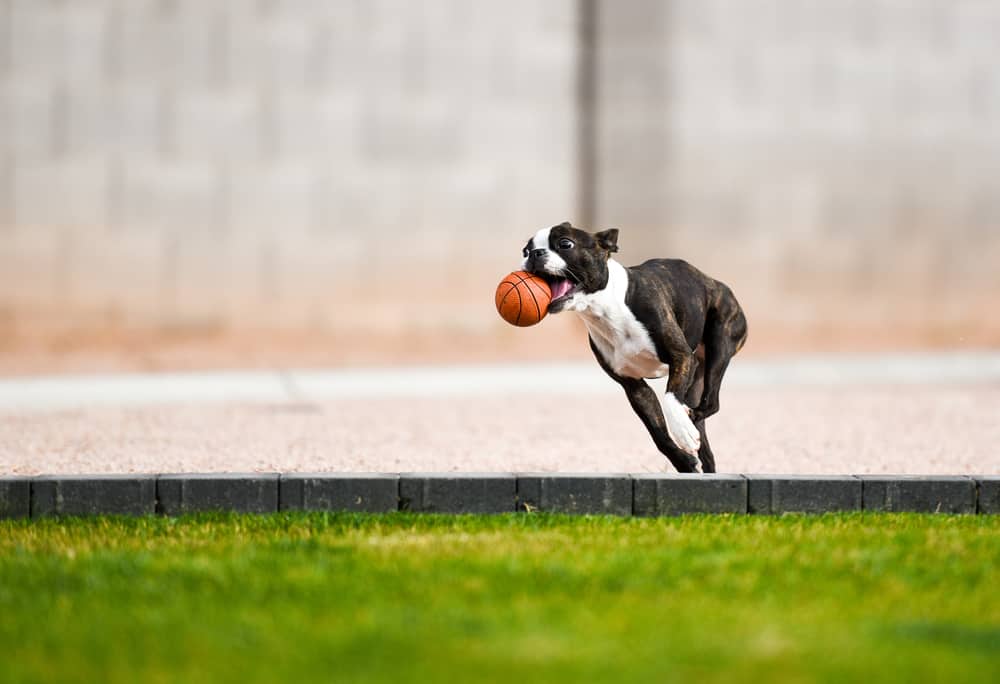 Boston Terriers need moderate amounts of exercise daily. A brisk walk once or twice a day should be enough to give it the exercise it needs. However, each dog is different, therefore the exercise needs may vary per individual.

Throwing a ball or toy in a securely fenced yard is an enjoyable way to bond with your dog. Participating in canine sports is a great way to release its energy as well. 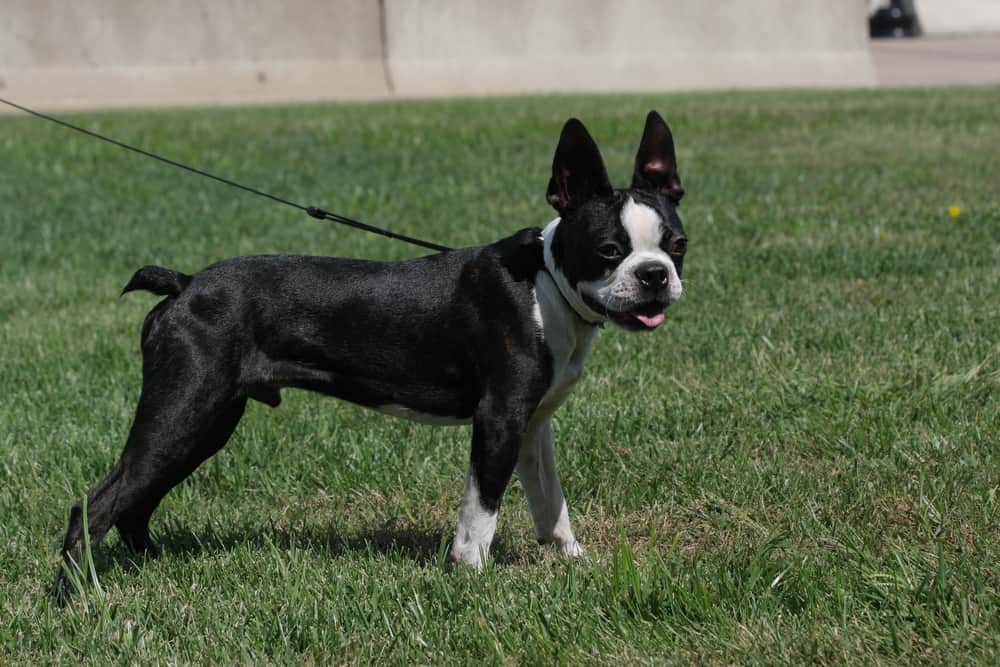 While its high intellect is already given, the Boston Terrier can be stubborn. So stubborn that an unlimited amount of patience and consistency is a must when training this dog. However, this dog quickly responds to your tone of voice, and punishments can make them feel down, so positive reinforcements, including treats and praises, should be used when training this breed.

Just like every other breed, early socialization is highly recommended. Gradual exposure to new acquaintances, places, and situations at an early age will greatly help this dog later in life. 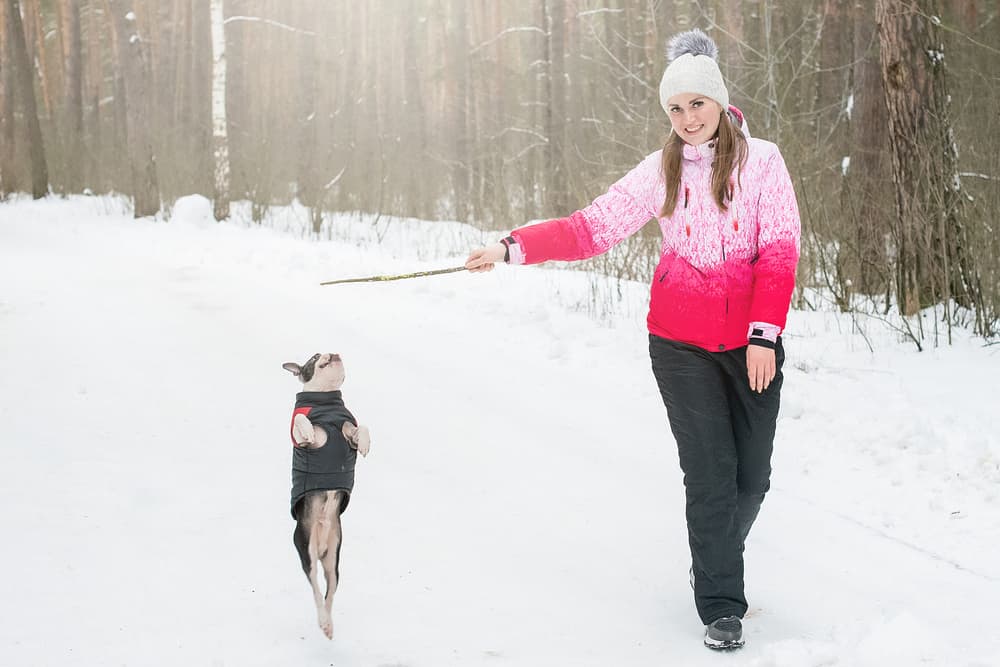 Due to its compact size and affectionate personality, the Boston Terrier makes a great addition to every family in any type of home. This breed’s goofy antics and alluring expression makes people of all ages fall in love with him. It makes a cheerful playmate for children and a great companion for elders. The Boston Terrier’s perfect size makes it small enough not to accidentally knock children down, but large enough that he doesn’t easily get stepped on, or injured.

Typically, this dog easily connects with other animals in the house, especially if they were raised together. 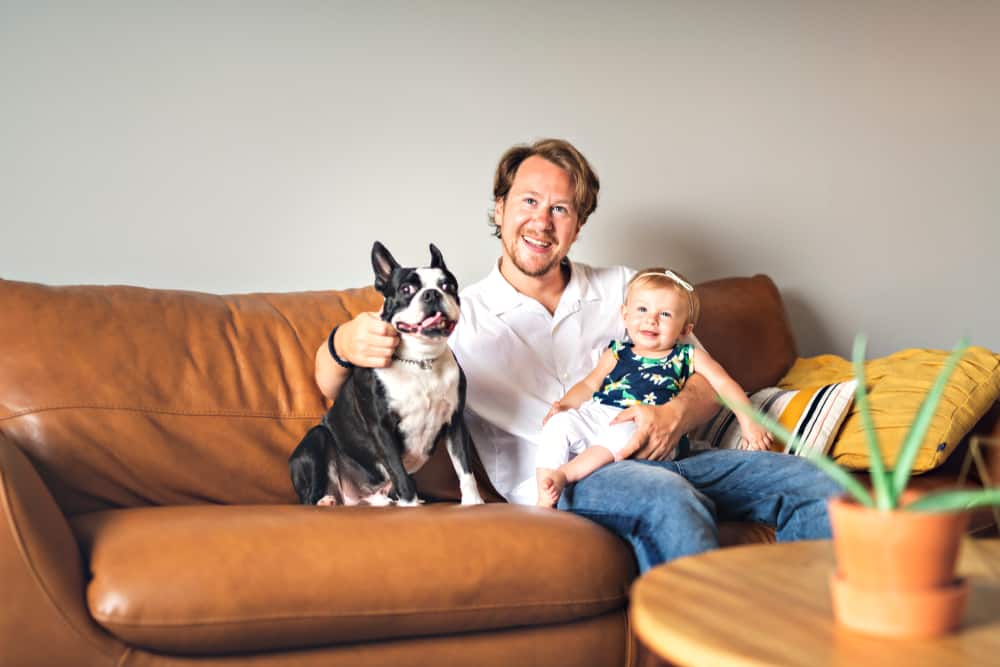 Because of its small size, the Boston Terrier can easily live in both apartments and homes with yards, provided that his daily physical and mental needs are met.

This breed should definitely be housed inside because its body cannot handle high and cold temperatures very well. Because of its flat nose, this dog snorts and sometimes snores in a way that is charming rather than disrupting.

Although this canine will bark at strangers and possible threats, it is not a great protector. It is most likely to invite an intruder instead of scaring it off. 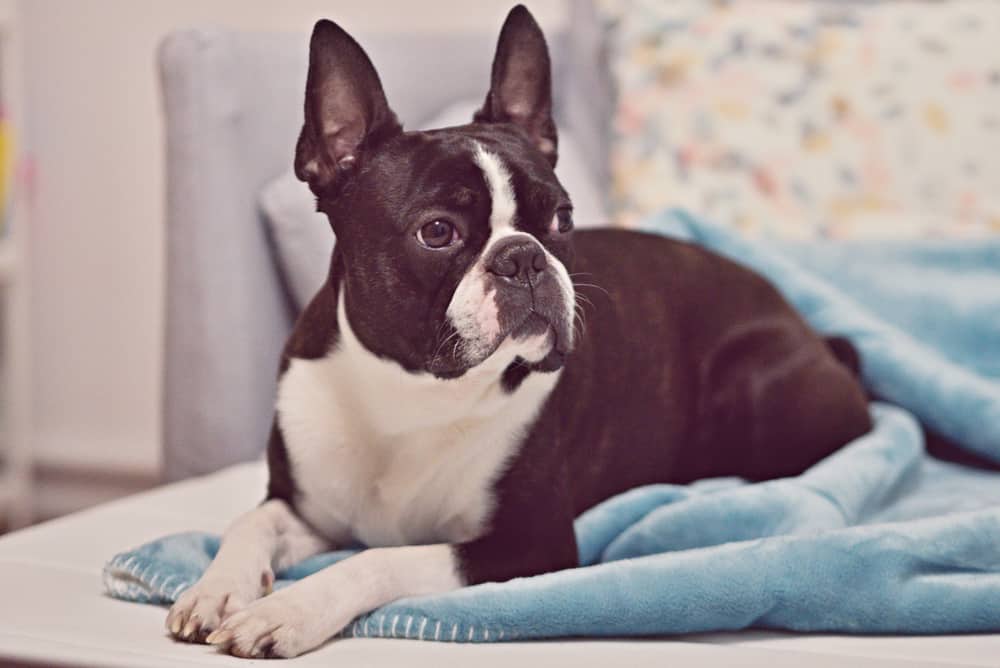 Just like almost every breed, Boston Terriers may also suffer from separation anxiety if he felt abandoned or left alone for too long.

To counter this from happening, you must establish a routine so that he knows that you are coming back. Make him his own safe place, such as a corner with blankets and pillows where he can curl himself up while you’re gone. But the most effective way to prevent anxiety is by providing your dog with the daily exercise he needs. 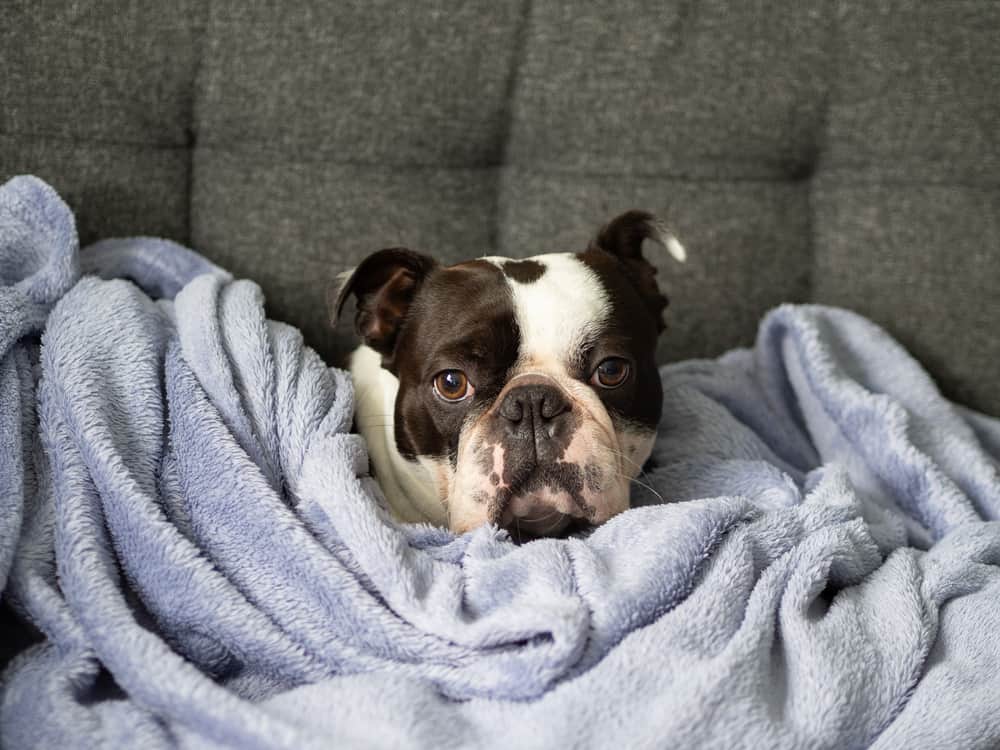 The Boston Terrier’s short coat makes it susceptible to high and cold temperatures, therefore must be kept indoors. Because of its flat face, the Boston Terrier may suffer from difficulty breathing when exposed to excessive heat or humidity.

Its large but beautiful eyes make this dog prone to cataracts, glaucoma, and corneal ulcers, therefore bringing saline eye drops is recommended for owners to remove dust or debris. It may also be glutinous about its food, so make sure to give it just the right amount of food to prevent obesity. 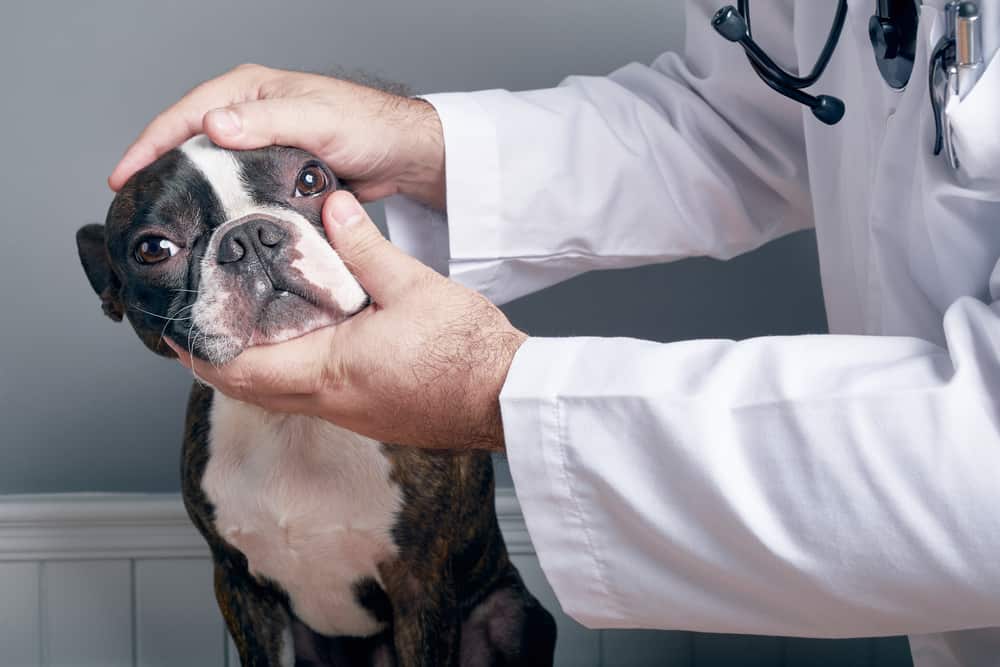