Who would win a battle between the hyena and the lion? Despite their notoriety in scavenging, hyenas can be quite methodical and skilled hunters. But would they be able to outsmart the King of the Jungle?

There are four species in the hyena family; the spotted hyena, the brown hyena, the striped hyena, and the aardwolf. The aardwolves are the smallest species, resembling the striped hyena in fur texture and colour. Spotted hyenas have a sandy coat that is yellowish or gray, with dark brown or black spots over most of their bodies. The brown hyenas have long, dark brown or black shaggy hair on their bodies and tan on the shoulders and neck. They have longer forelegs that are tremendously built than the hind legs. The striped hyenas have long hair that is gray to straw-colored, a black muzzle, and black stripes on the head, torso, and legs. The hyena family has a short, bushy tail with the females 10% heavier than the males. 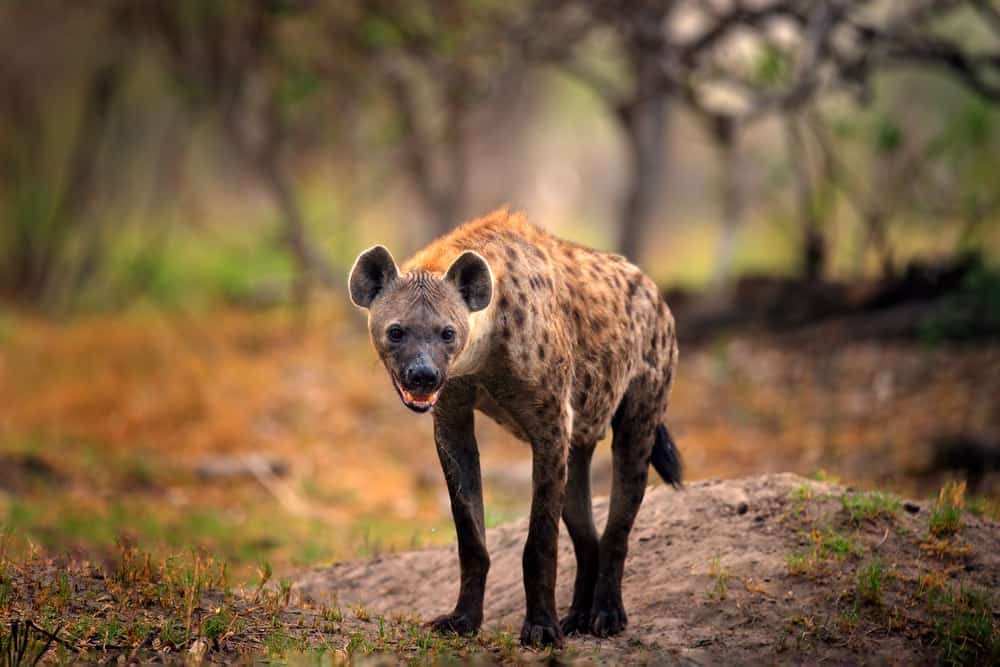 The lion, on the other hand, has been taken as a symbol of courage and strength throughout history hence the name ‘King of the Jungle’. They are powerfully built cats, second largest after the tigers, with their males generally larger than the females. The males have a thick mane of brown or black hair around their heads and necks used for protection when fighting other males. Their coat is short and varies in color from buff yellow, silvery gray, or orange-brown to dark brown. They have a long tail, approximately 3 feet, that has a tuft of hair at the tip that is usually darker than the rest of the coat. 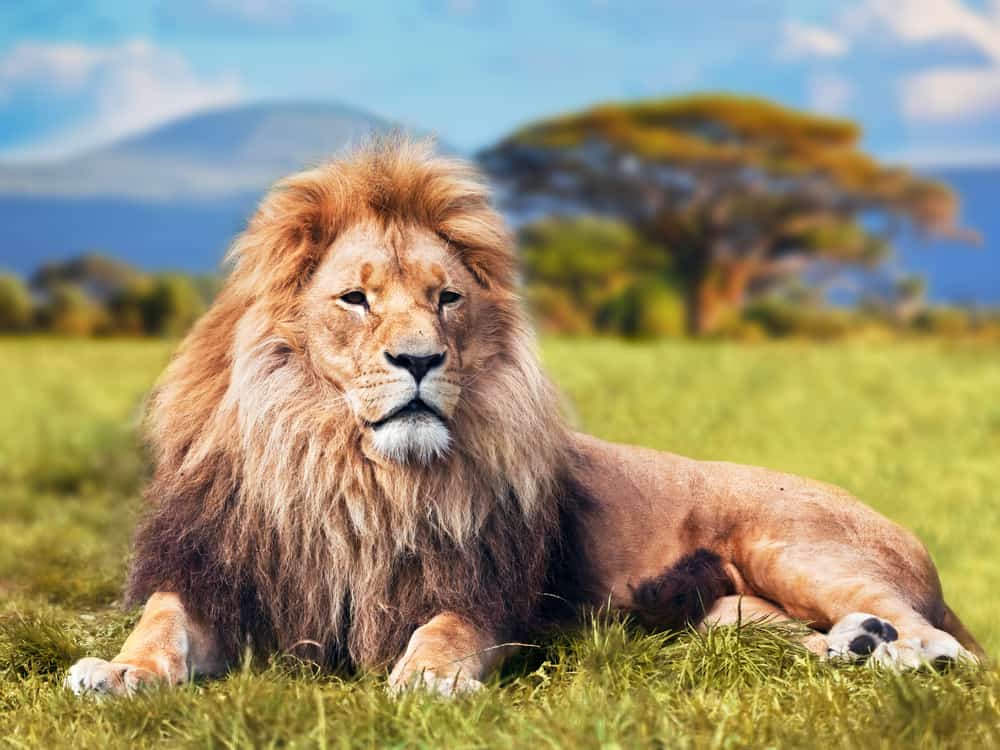 Lions are known to have roamed mostly in Africa, and parts of Asia and Europe. However, the species has disappeared and can only be found largely in sub-Saharan Africa. Lions are known to live in groups called pride. A typical pride consists of up to three adult males, a dozen females, and they’re young. Nonetheless, some pride can get extremely large with up to 40 members. Each pride has its territorial region that is fiercely protected against other intruding lions by the pride’s males. 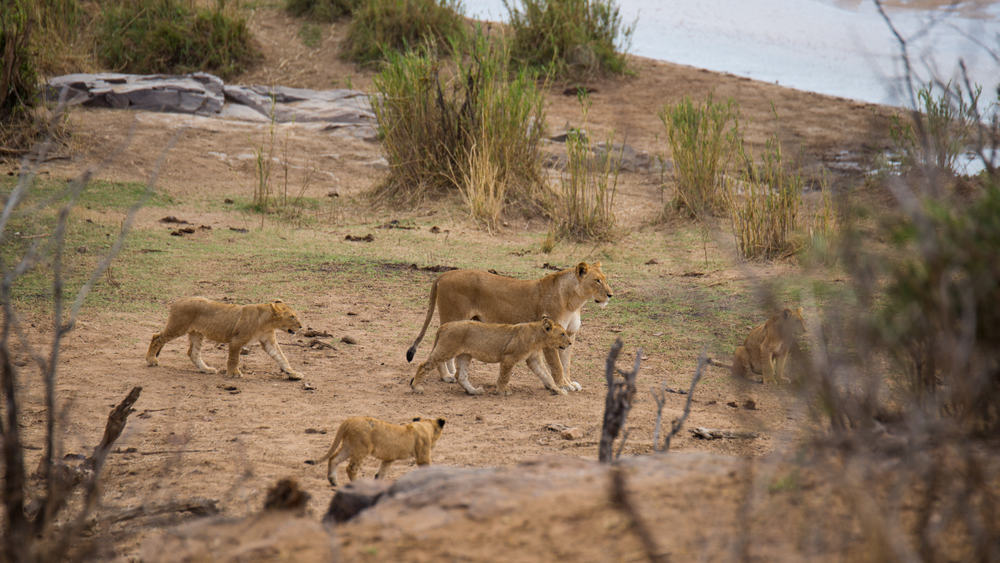 Different species of hyenas live in different regions. Brown hyenas are sparse, found between the Angola-Namibia border and the Orange River in South Africa. Aardwolves live in southern Zambia, Angola, Mozambique, as well as the East African region. Spotted hyenas occupy south of the Sahara Desert and the Serengeti, while the striped ones, with the largest range of all, live in northeast Africa, the Middle East, Asia, all the way to southern Siberia. Hyenas live in clans of up to 80 members headed by the females, who are more aggressive than the males. Some hyenas are quite vocal and can make a ‘laughing’ sound that has long been associated with their name. 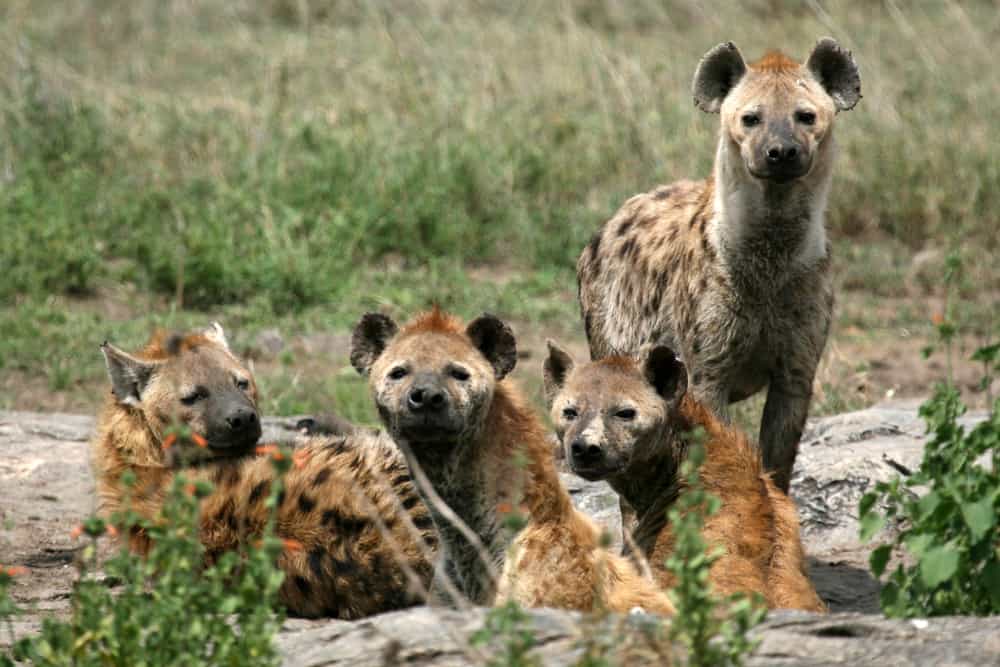 Female lions are the chief hunters of the pride. However, the males can join in particularly when the prey is extremely large. They prey mostly on large animals such as antelopes, wildebeests, zebras, and even larger ones like elephants and giraffes but only if the individual is young or sick. Teamwork is a key aspect as most prey is usually faster than the lion. They jump on the backs of very large prey to bring them down, but with smaller animals, they trip their legs with their paws. 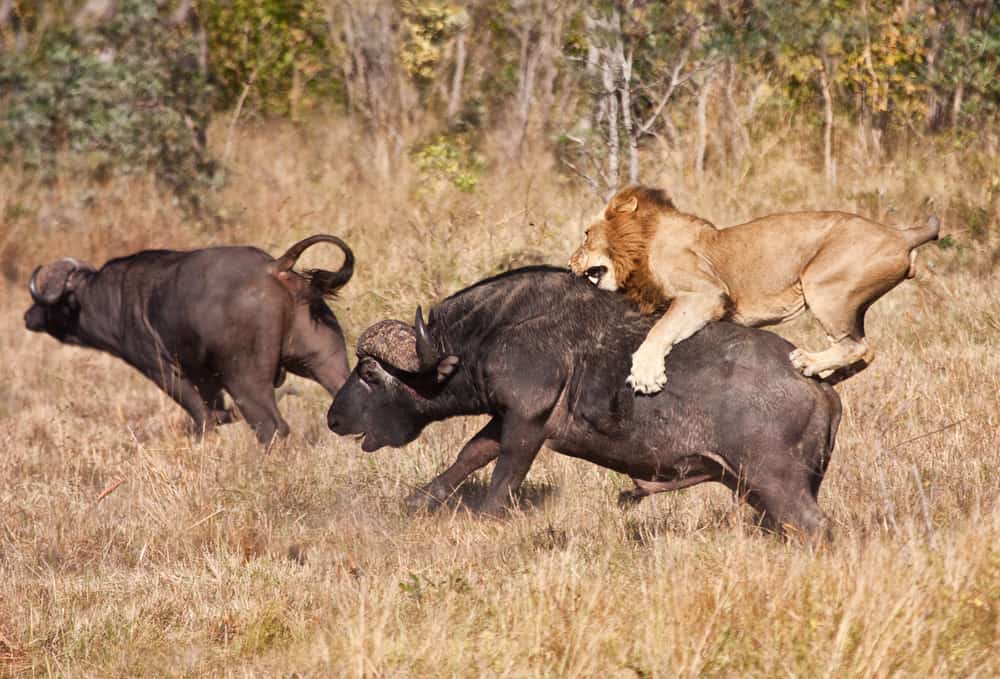 Aardwolves are insectivorous and only eat termites. The other hyena species are known to scavenge other predator’s kills. However, on rather fewer occasions, they hunt for antelopes, wildebeests, birds, jackals, lizards, fish, porcupines, and snakes. The size of the meal is usually dependent on how large the clan is. Hyenas eat every part of the animal, including bones and hooves, leaving nothing for waste. They might even hide extra food in water holes. 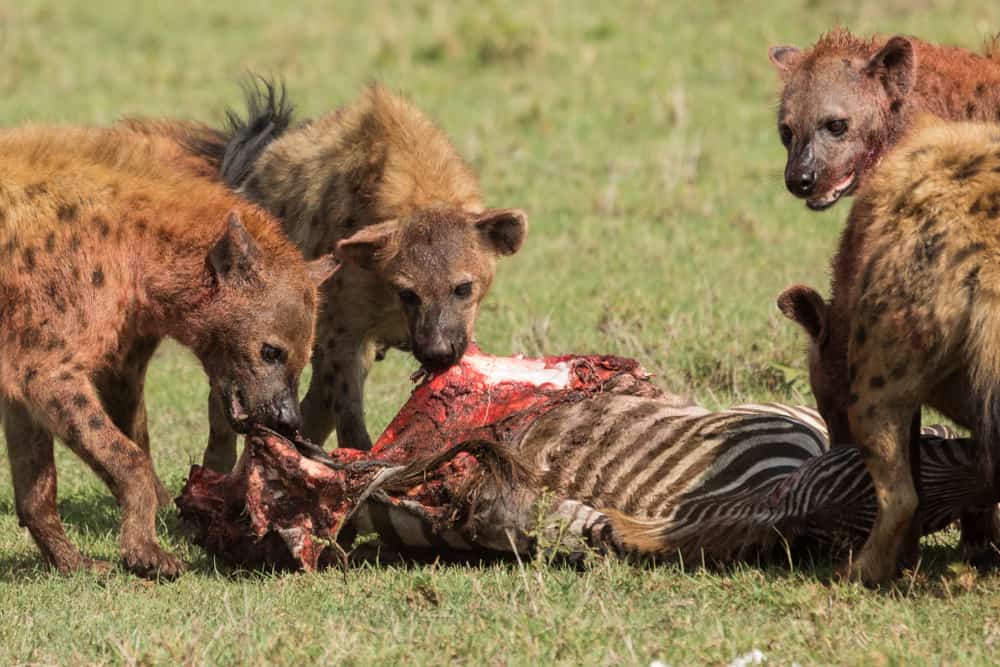 For hyenas, mating typically happens outside the clan. Non-related males and females usually mate after a courtship of several days. With a gestation period of three months, female hyenas give birth to two to four cubs. The cubs leave the den after 2 weeks and eventually leave their mother when two years old. 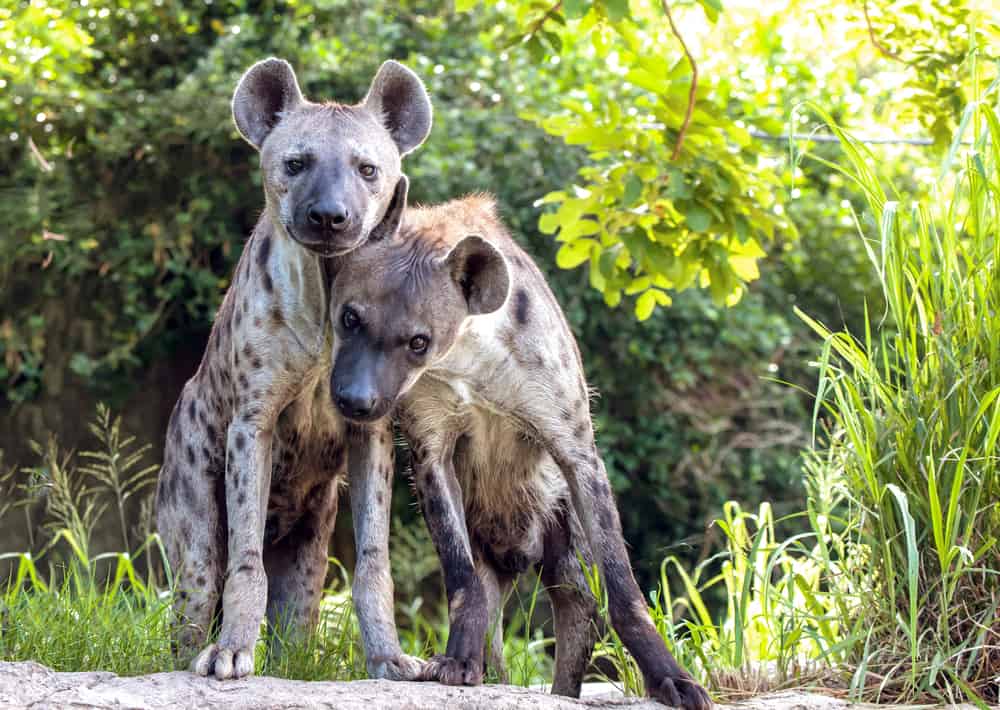 On the contrary, lions mate within their pride with the female lions restricted to one or two adult males. The females remain receptive to mating for 3-4 days. After a gestation period of 108 days, they give birth to a litter of one to six cubs, who are kept away from the pride, including their father. The lioness and her cubs would then rejoin the pride after six weeks of isolated nursing. 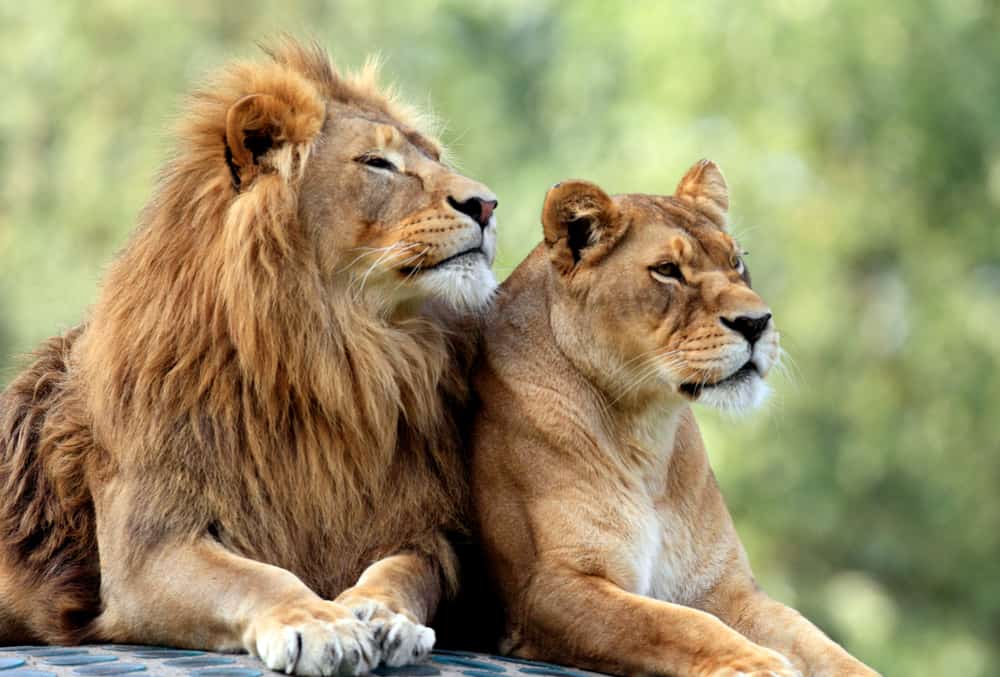 Who Is The Strongest?

It is beyond doubt that these two species are ‘mortal enemies’ due to the existing competition. They cover the same ground, hunt the same prey, as well as scavenge the same remains of animals. Amidst stealing food from each other, they are known to kill each other’s young.

Their fights might sometimes go on for days especially if it’s between a whole clan and pride as none would back down from the other. However, in single combat, the lion would be the prize winner but not on a silver platter. Hyenas are known to be aggressive and can ‘speak’ to each other signaling intent or need to their mates. The more the females, the stronger the clan. They have a jaw grip equal to more than a ton but make no mistake, this can only be useful when encountering an old, young, or injured lion otherwise, an outnumbered lion would run, making it hard to catch it, let alone kill it.

With the lion having a bodyweight of 180kg and a 6 feet body length, it is bulkier and therefore no match for a hyena with approximately 35kg and 33 to 51 inches of body length. These massive counterparts would pounce on the hyena and bite it on the neck before suffocating it to death. Unless the lion is sufficiently exhausted after a kill, only then can alone hyena have a chance at winning.