Eagles are taken as a symbol of power and strength. A fight between the American bald eagle and the golden eagle would be intriguing to watch. Who do you think will win this fight?

The Bald Eagle has been the national emblem of the United States since 1782 and is sure majestic in its appearance. It has a white head and tail with a dark brown body and wings. Bald eagles have a large head and a long, hooked bill with yellow eyes, feet, and beaks. Juveniles have dark heads and tails with their brown wings and bodies mottled with varying amounts of white. They are commonly confused with the golden eagle and acquire adult plumage in around five years. 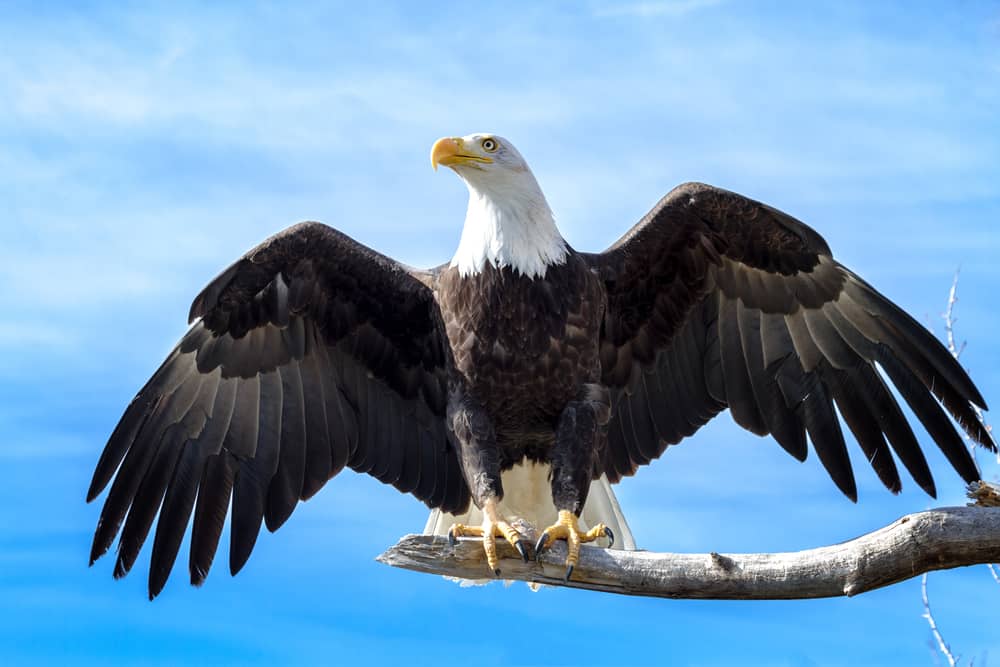 The Golden Eagle is the national bird of Mexico and North America’s largest bird of prey. This magnificent bird has broad rounded wings, with feathers ranging from black-brown to a shade of dark brown. Its head and neck are covered by a light golden-brown plumage hence their name. Juveniles have white blotches at the base of the primaries in their wings and tail. 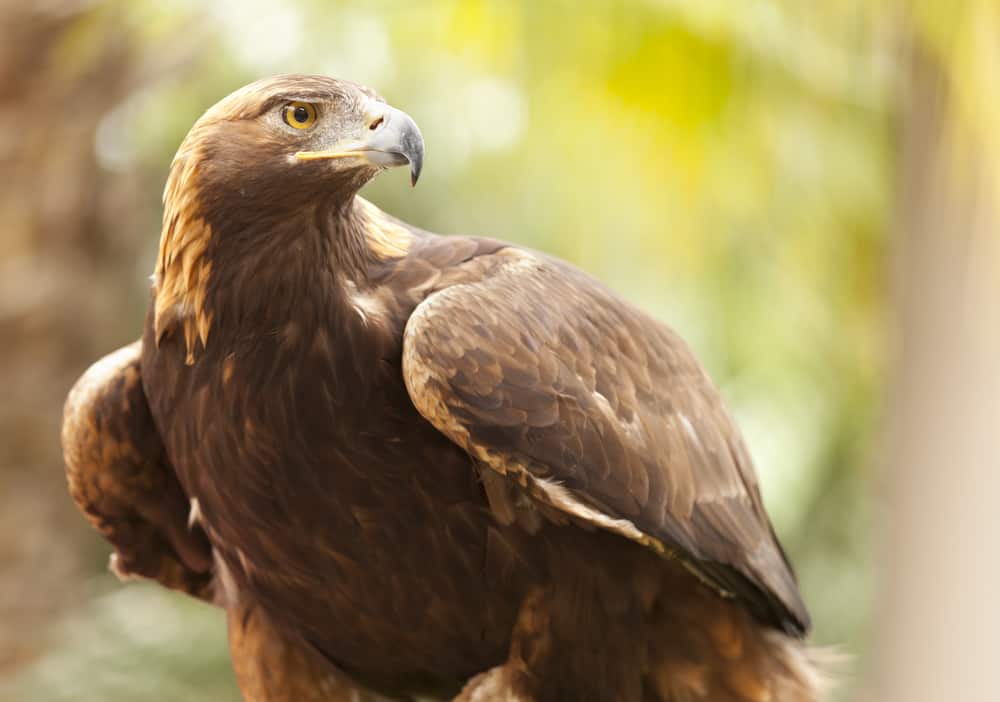 Bald eagles are found in the United States, Canada, Mexico, and Alaska. They are mostly found close to water bodies where prey is abundant. They have also been located in the treeless islands of Aleutians and the desert rivers of Arizona. 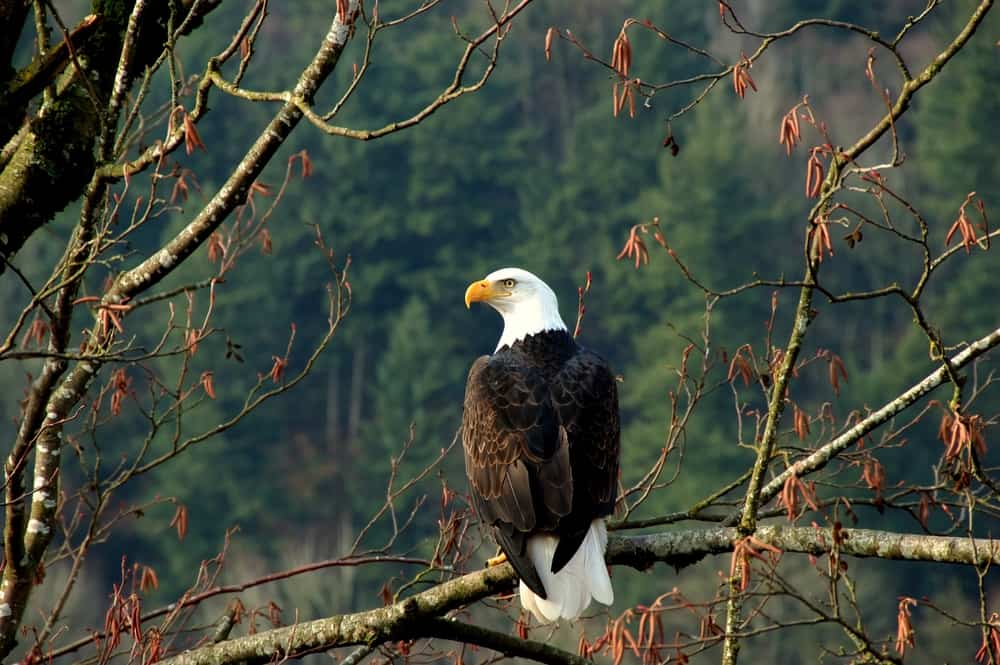 Golden eagles, on the other hand, are natives of the northern hemisphere. They are found in North America, Europe, and some parts of Asia and Africa as well as the river Mississippi in the United States. They typically live in the mountains, plateaus, and deserts as they build nests with large sticks on tall trees and cliffs.

Golden eagles are somewhat solitary birds but may bathe or roost together during winter. Breeding pairs maintain territories of around 2800 to 4900 acres and attack eagle intruders by diving at them as they are more aggressive compared to the bald eagles. Though usually silent, the Goldens make a shrill, high-pitched note during the mating and nesting season. Mates stay together for years, building several nests in their territory over the years. 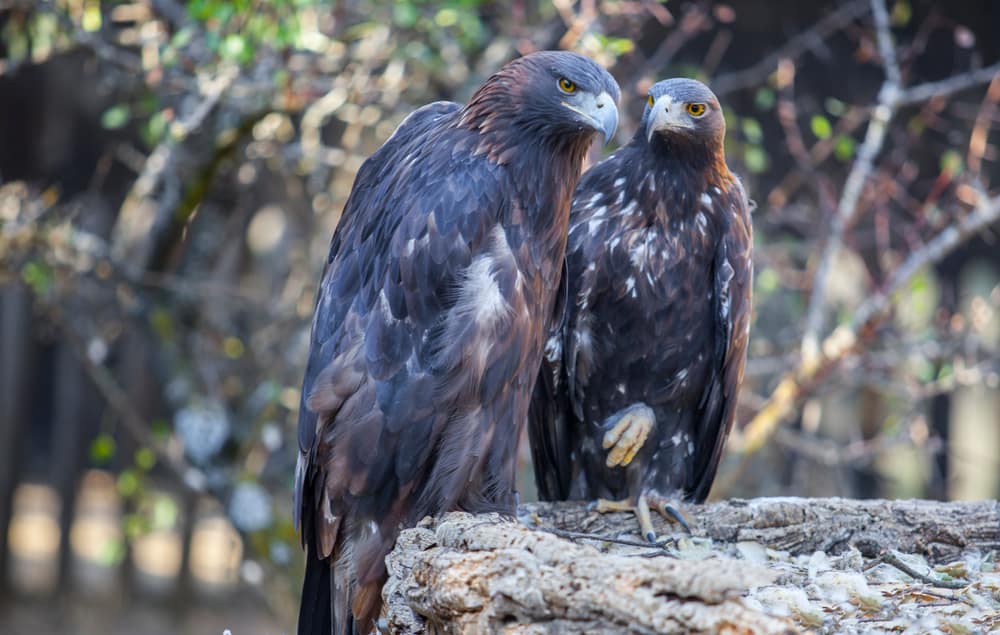 Comparably, bald eagles mate for life. They construct one of the world’s biggest bird nests at the pinnacle of a rock where the female lays a single egg each year. The couples hunt cooperatively, with one individual flushing prey towards the other. 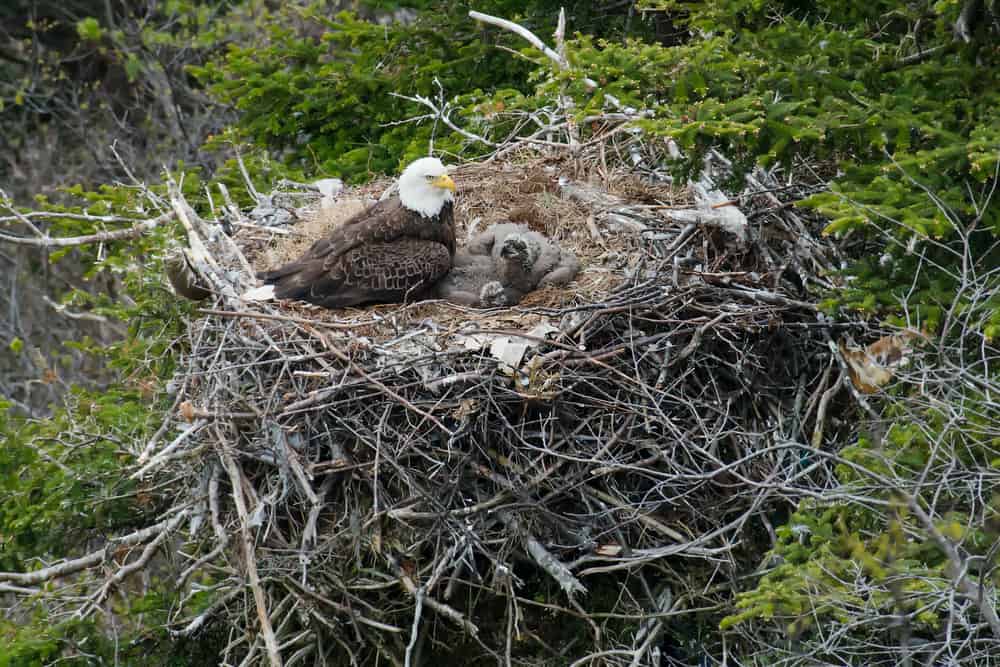 Goldies are quite silent cruisers. However, the breeding season is ushered in a unique style. Nestlings make high-pitched begging calls to their parents that are distinct for a mile or more. On returning, parents announce their pleasant food deliveries with a whip or a wonk. Golden adults are sometimes heard making yelping calls which are often considered to be related to food shortages or during a cartwheel when a couple performs aerial displays with the male making mock attacks at the female and the couple then descends downwards uttering. However, their calls generally tend to be high, weak, and whistled. 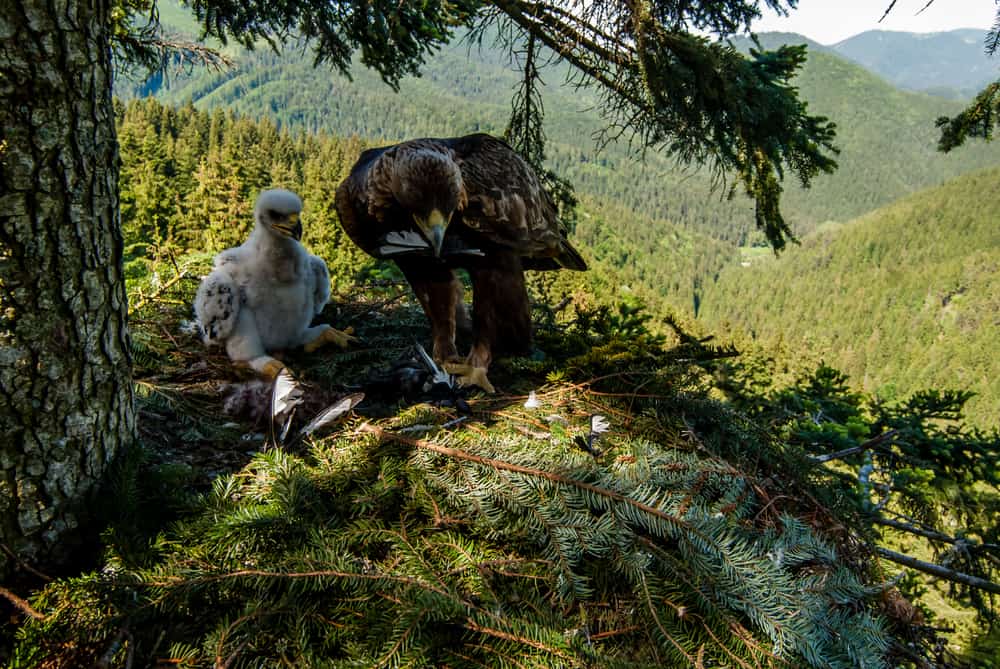 Well, bald eagles don’t sound impressive but rather pitiful. Much like a small bird, you would find it in your yard or maybe like a small turkey. They emit weak sounding calls that are usually a series of high-pitched whistling or piping notes. During the breeding season, the female bald eagle may repeat a single, soft, high-pitched note, typically referred to as “unlike any other calls in nature” to show her readiness for copulation. Male also have their unique call that is emitted as a defense mechanism. It is a high-pitched peal let out when other birds or humans approach. 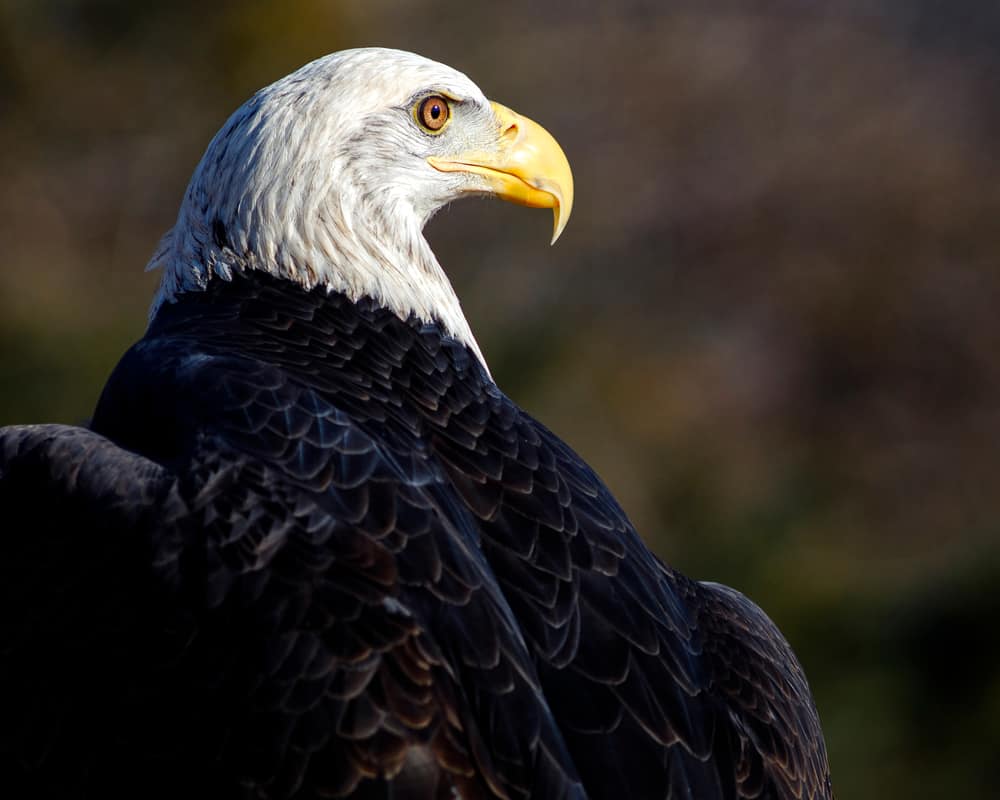 Bald eagles mainly prey on fish but may sometimes scavenge carrions or snatch the kills of ospreys and other birds. Aside from living fish, they may also hunt small mammals, gulls, and waterfowls. 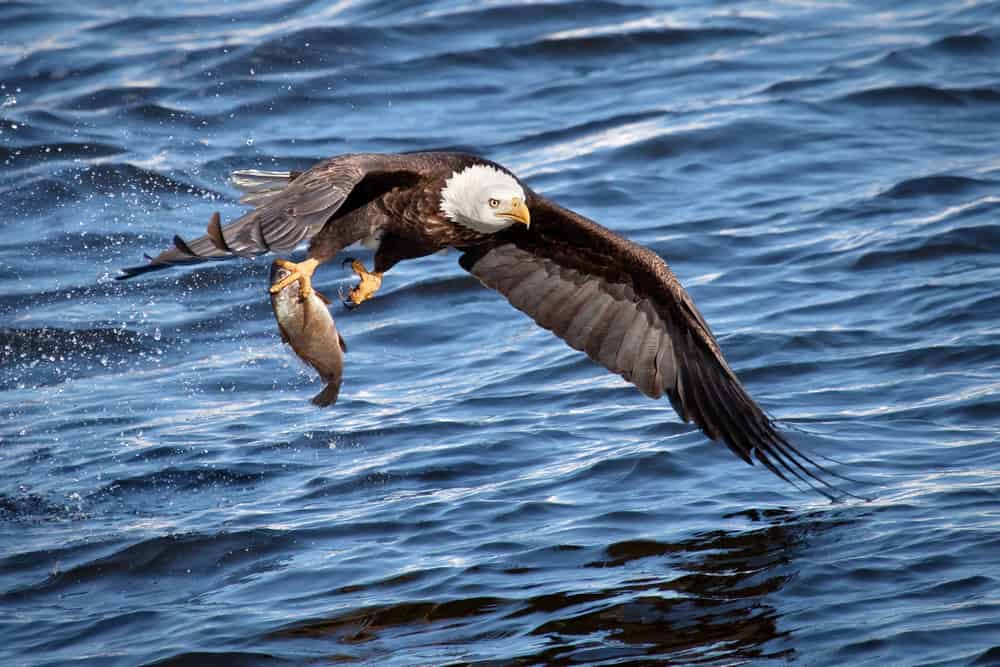 Golden eagles eat carrion, reptiles, birds, and some are even known to attack a full-grown deer. Unlike the bald eagles, their talons are sharp and strong enough to snatch up rabbits, marmots, and ground squirrels. 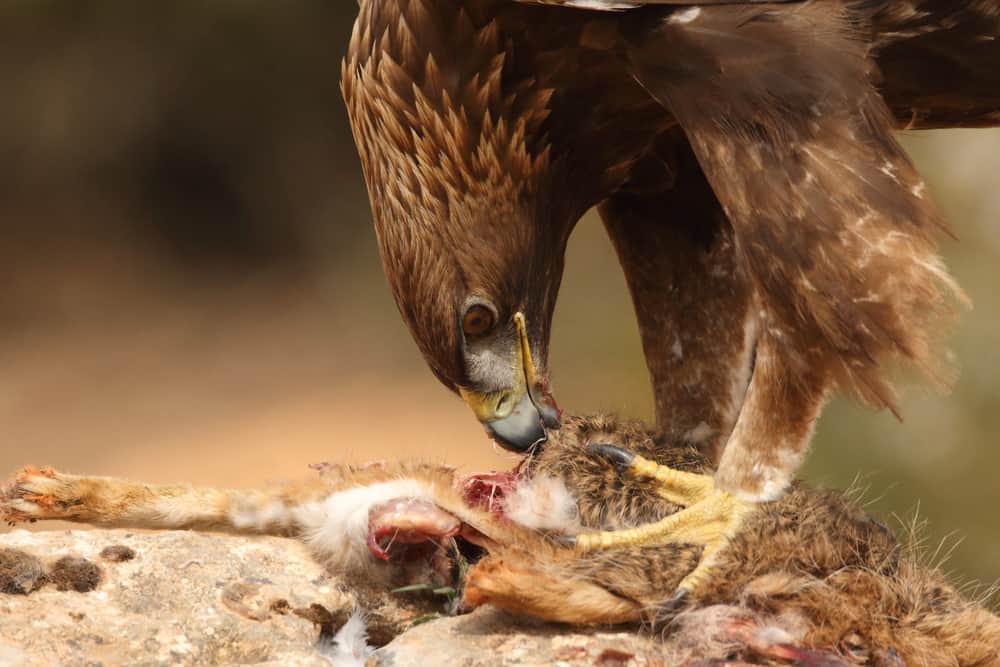 An adult bald eagle has two-inch long talons that are capable of exerting a force of 400 pounds per square inch of pressure. Scientists have proven their grip is about 10 times stronger than the grip of an adult human hand. They are capable of lifting an estimated weight of five pounds. 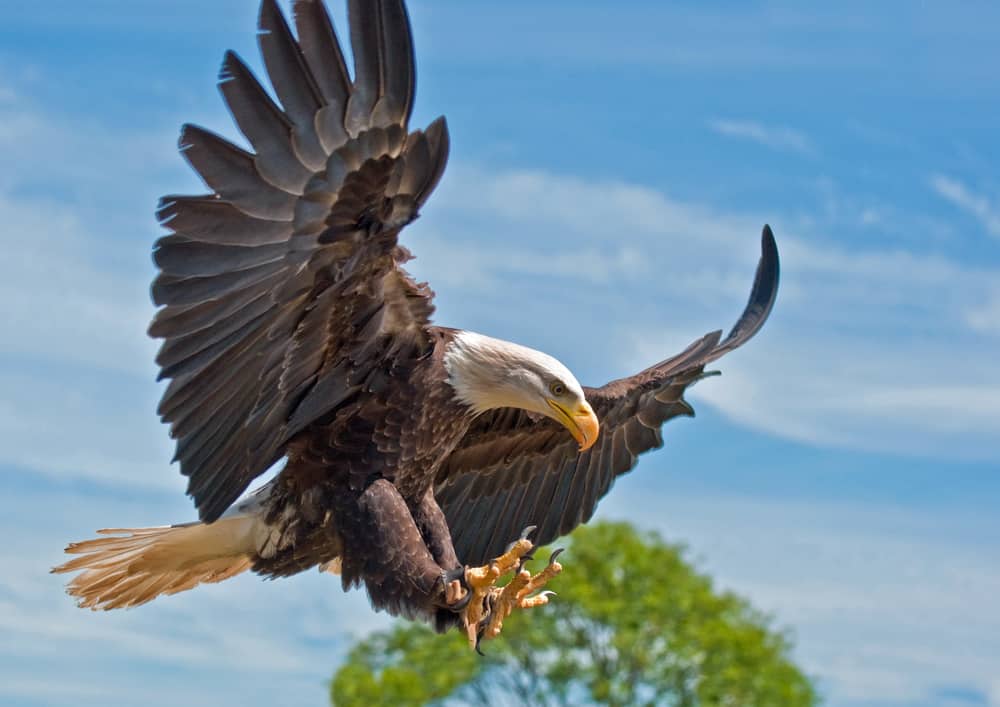 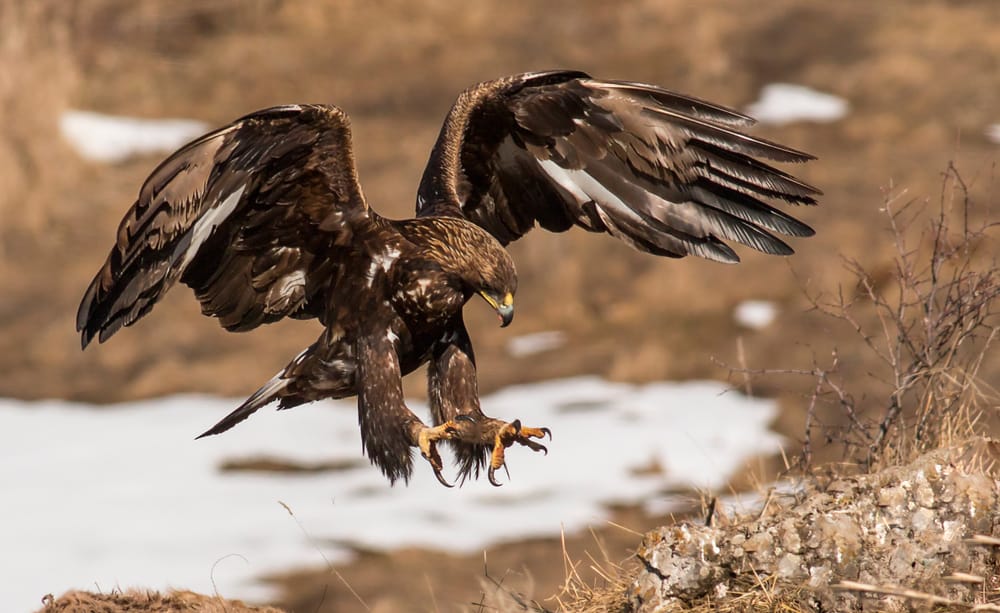 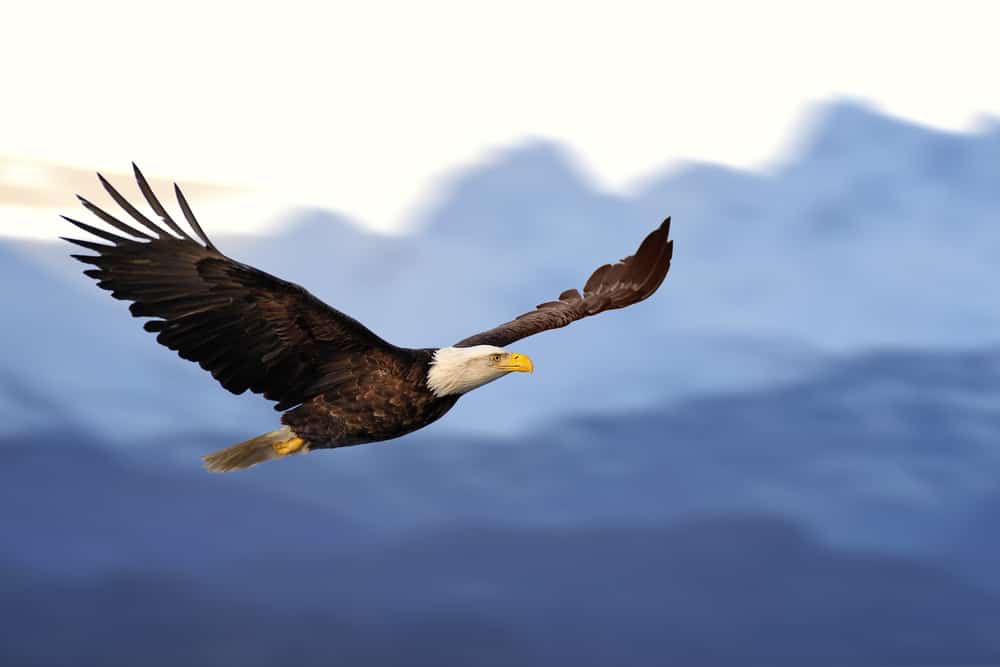 This is no match for a golden eagle, the world’s second-fastest bird, who has a soaring speed of around 32mph (52 km/h) but can reach a maximum of 200 mph (320km/h) diving speed. 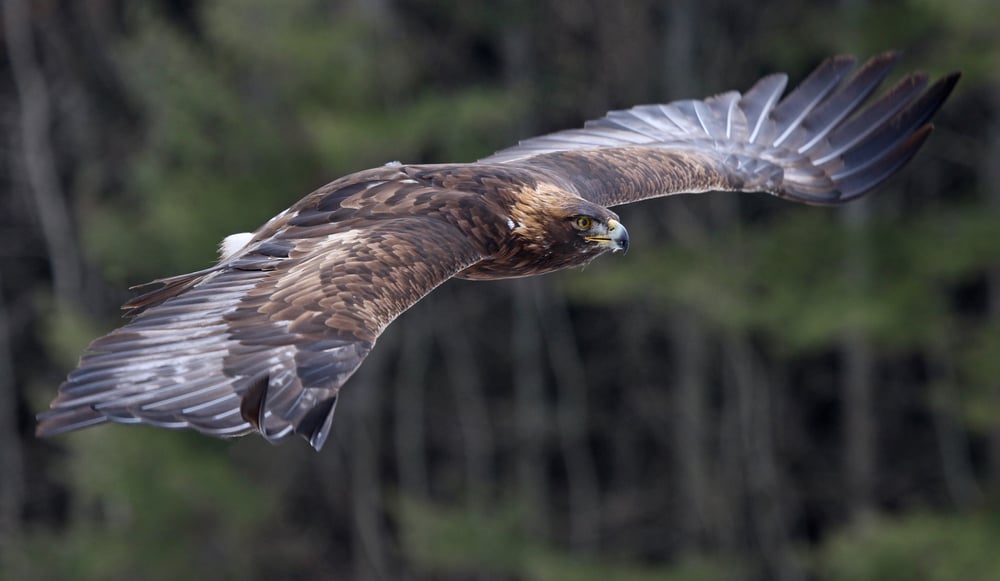 As majestic as they are, bald eagles can surprisingly lead scrappy lives. Males often sneak up to snatch prey from other males or other birds. In battles waged over territory, they sometimes wield their sharp talons while scuffling for a bite of fish. 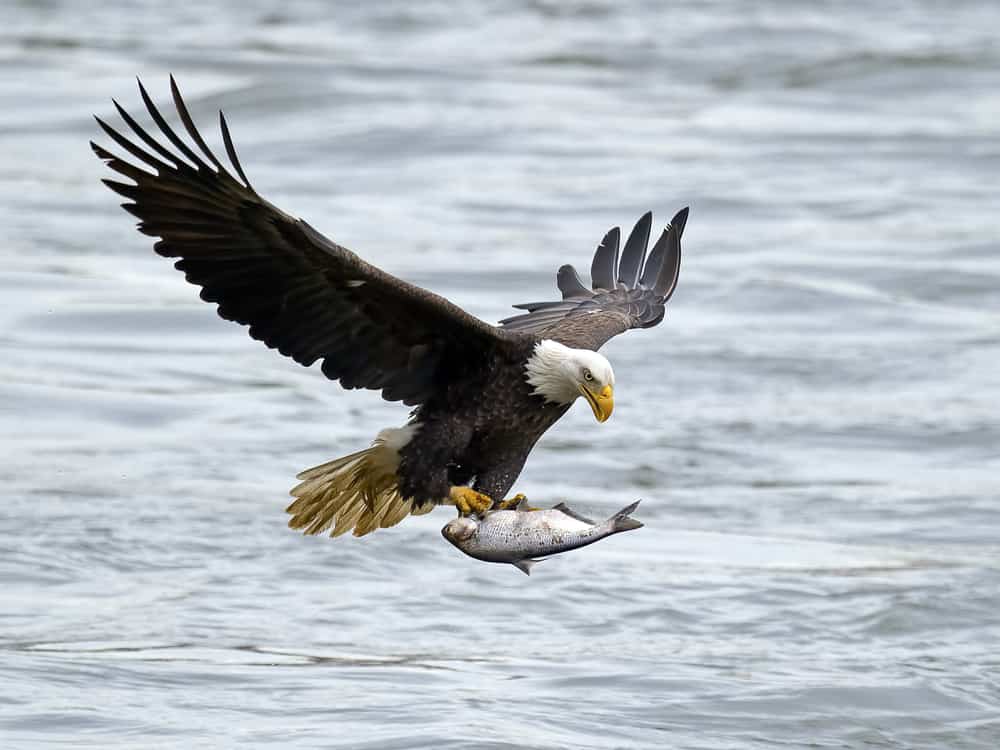 Golden eagles may attack slow-flying birds by soaring upwards and with a rapid descend, they knock the birds out of the sky. The fact that they can attack mountain goats shows that they are opportunistic birds of prey. Consequently, their agility is likely enhanced. 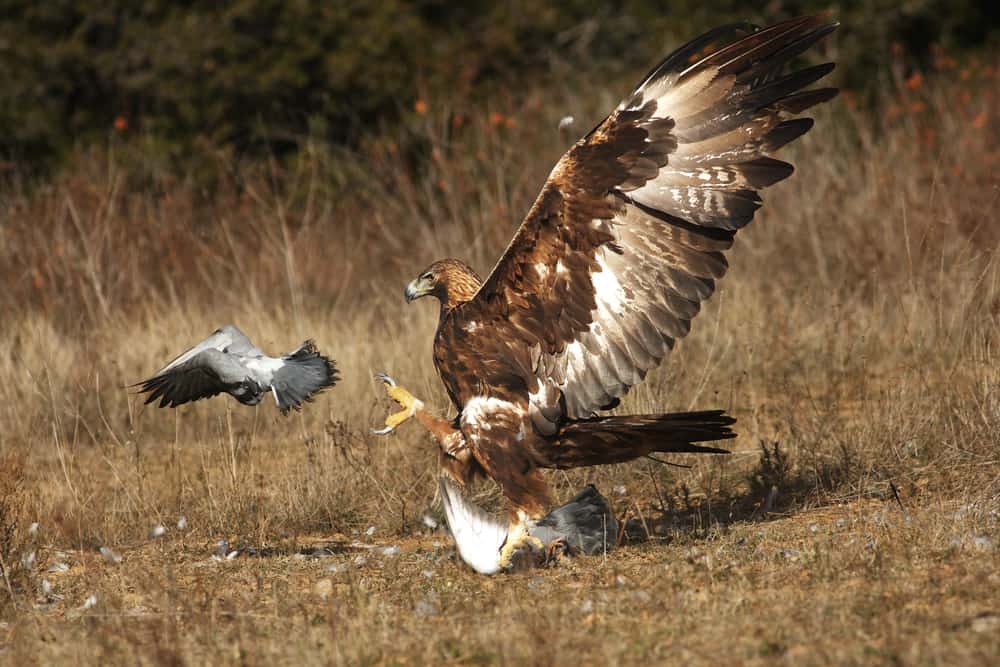 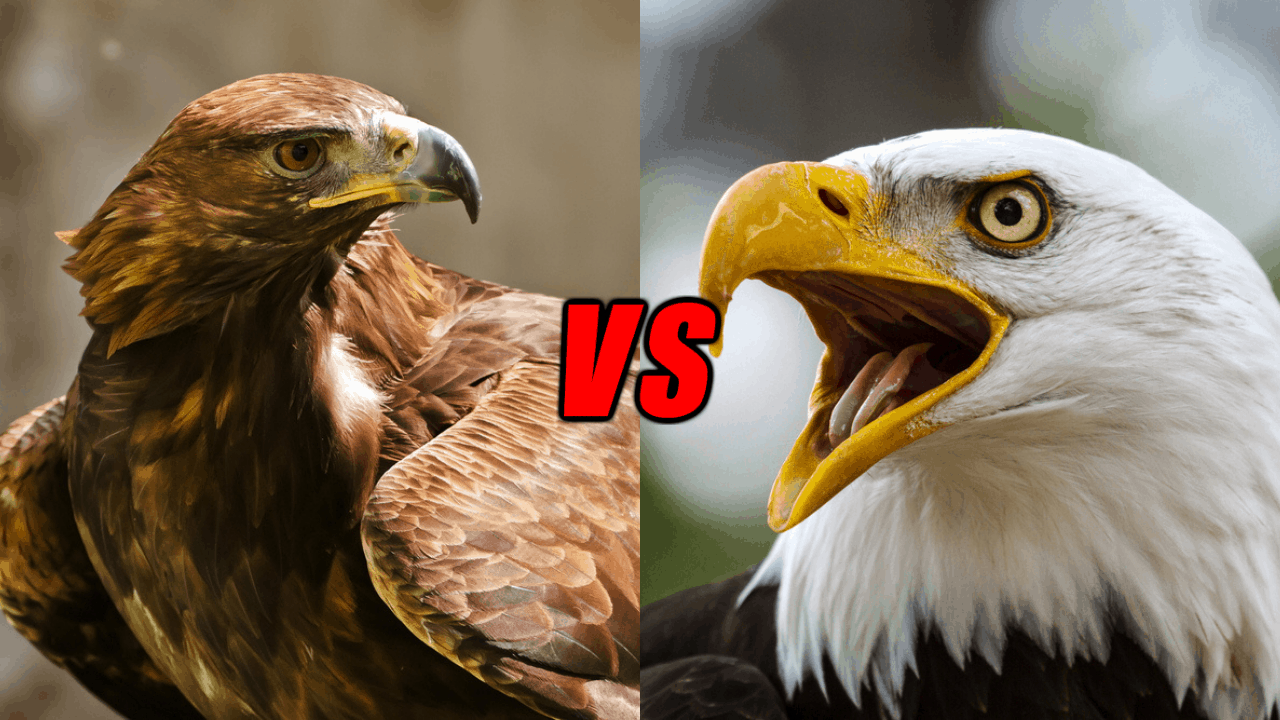 Both birds are equally competitive. However, being fish eaters, bald eagles are not as strong as the golden eagles who hunt terrestrial animals. They might be larger but agility is a key factor in a battle.

Golden eagles kill by stabbing their prey, with impact-diving at high speeds which may result in broken bones and torn tissues. Their feet are therefore armored with strong muscles for pinning down prey, shanking them to death as they crush their spine. Though not equipped with a powerful bill, their grip strength is further than a bald eagle could ever dream of.

Bald eagles have pretty strong jaw muscles, however, they lack in speed, agility, and gripping power compared to the Goldens. Their talons and rough feet are only suitable for gripping slippery prey like fish and not stabbing them to death.

In a showdown between these two powerful birds, the golden eagle will likely use his tenacity, strength, and speed advantage to outwit the bald eagle. He would indeed be Golden.