Who will win a fight between America’s largest cat, the jaguar, and his counterpart, the leopard? A head-on between these two mighty cats is predicted to be no less than vicious and gruesome. As similar as they may look to the untrained eye, these two animals may be mistaken one for the other but one can tell the difference from their rosettes. Did you know the name ‘jaguar’ came from the indigenous word jaguar which means ‘he who kills with one leap’?

The jaguar is the third biggest cat in the world – after the tiger and the lion – and can grow up to 170cm (5 to 6 feet) long, not including their stunning long tails which can grow up to 80cm. They can weigh from 150 to 200 pounds, as they need that bulk to take on big prey. Jaguars have larger rounded heads compared to leopards and short legs. They have black dots in the middle of their rosettes hence differentiating them from their counterparts, the leopards. Many ancient South American cultures worshipped these powerful cats as gods. 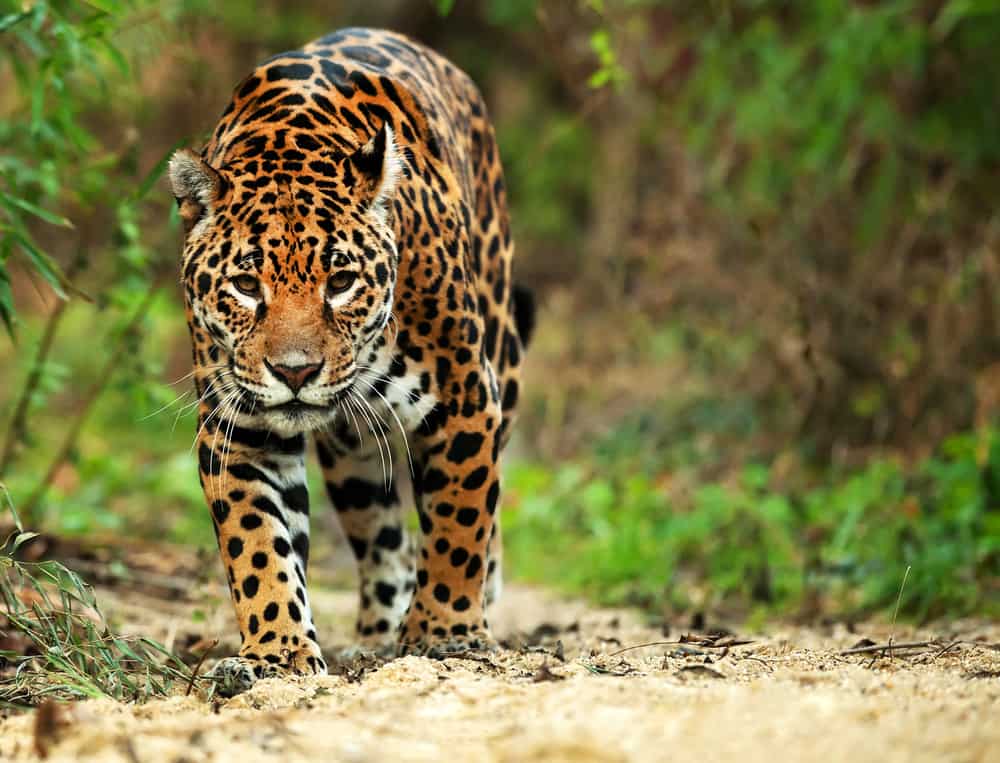 The leopard, on the other hand, is the smallest member of the large cat category. They have golden spotted bodies and are often thought of as African animals but they live all over the world. They can grow to up to 190cm (3 to 6.2 feet) long with their tail adding another 25 to 39 inches (64 to 99cm). Females can weigh up to 132 pounds (60 kg) whereas males weigh around 36 to 75 kg. Black leopards which are normally almost solid in color are commonly called blank panthers. 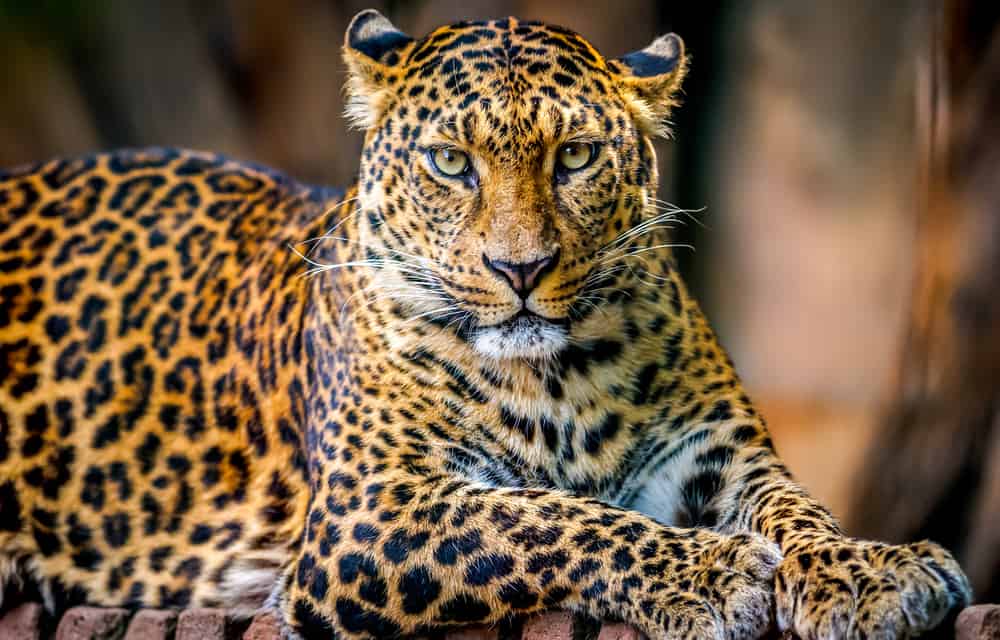 Jaguars were known to roam broadly from central Argentina up to the southwestern United States. Their stronghold is in Brazil, holding around an estimated 170,000 wild jaguars though they still exist in small numbers in Central America. They are typically found in tropical rainforests, commonly the Amazon and the Pantanal, the savannahs and swamps.
Leopards are known to be adaptable animals and can live across the globe. They are found predominantly in sub-Saharan Africa, the Arabian Peninsula, the Judean Desert of Southwest Asia, southwestern and eastern Turkey, the Himalayan foothills, India, Russia, China, and the islands of Java and Sri Lanka. 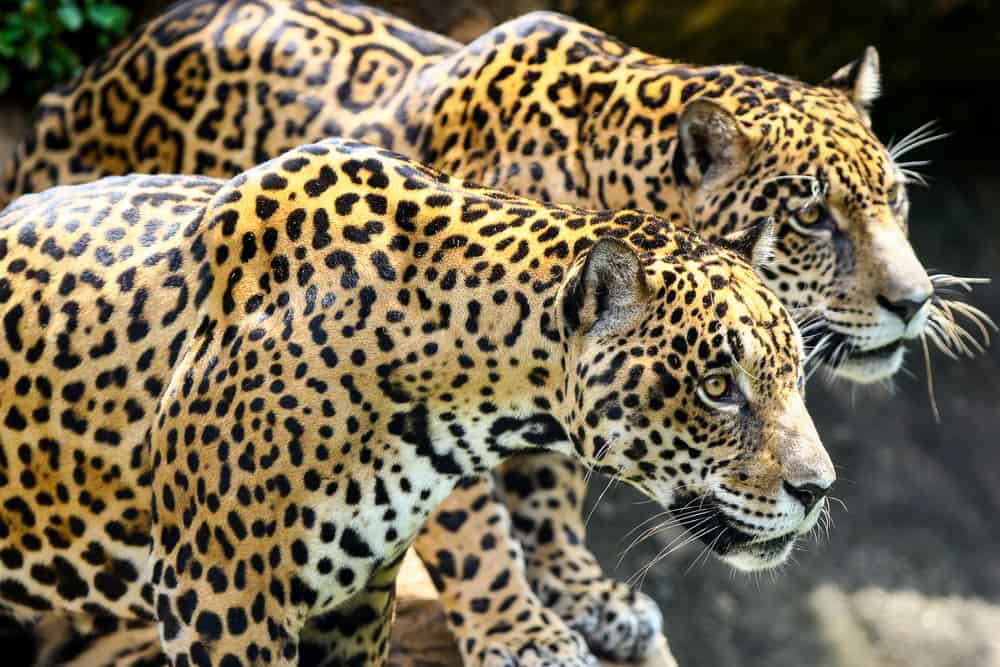 Leopards can adapt to almost any kind of environment, from rainforests to deserts to woodlands and coastal areas. As a matter of fact, they are known to live in more places than any other large cat. 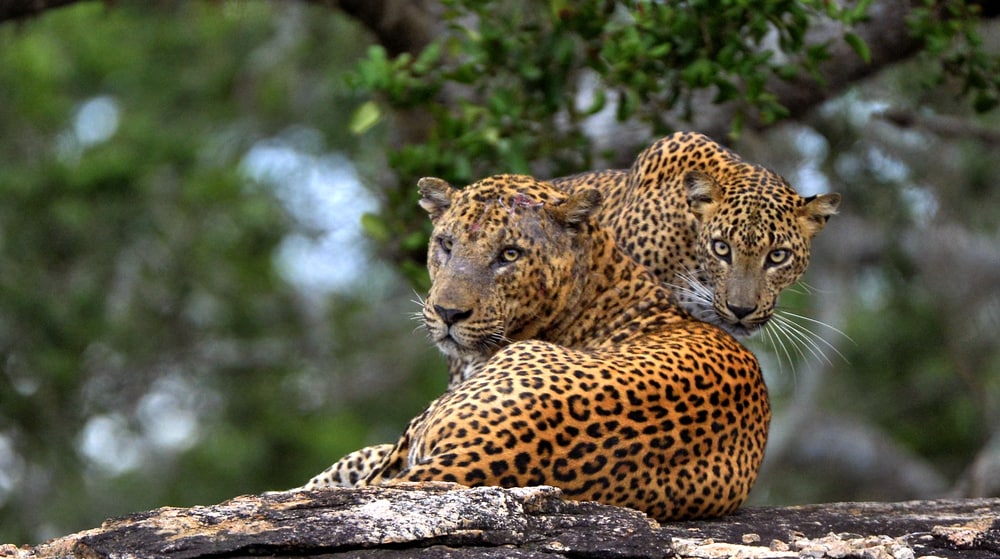 As opposed to every other cat, jaguars do not avoid water. They are relatively good swimmers as they often live near lakes, rivers, and wetlands. They prey upon fish, turtles, and even caimans, using their immensely powerful jaws to crush the prey’s skull. They also hunt deer, iguanas, armadillos, birds, and monkeys.

Jaguars live alone and are territorial, marking their regions with their waste or clawing trees. Young jaguars learn to hunt by living with their mothers until they are about 2-years-old or more. They hunt during the day and at night and can travel up to 10km a night when hunting. Although they hunt during the day as well, they reach high peaks of activity during dawn or dusk. 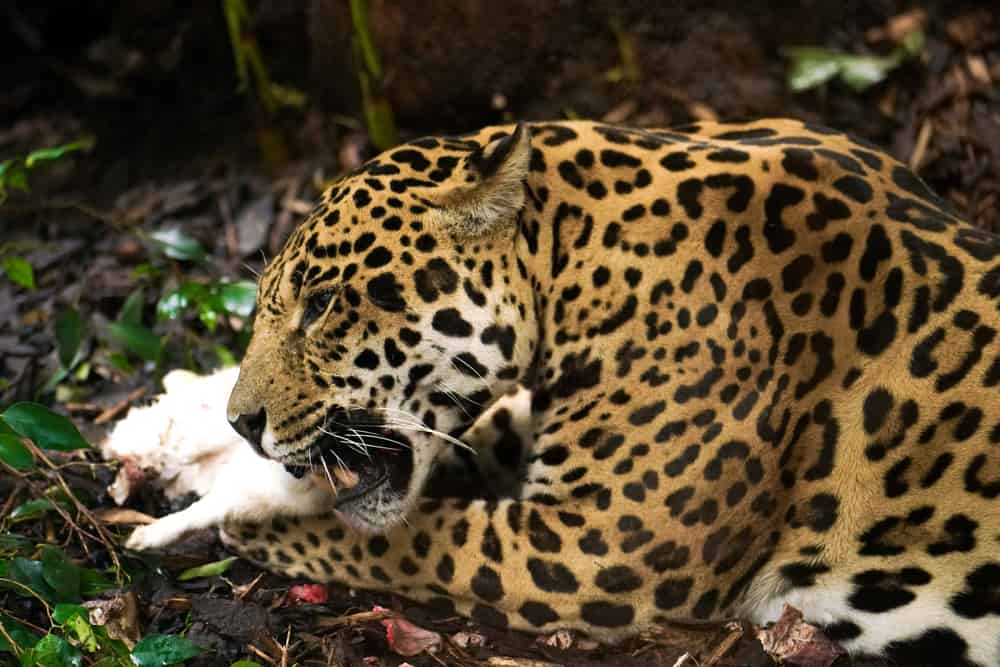 Just like the jaguars, leopards too are excellent swimmers. They are graceful and can run at a speed of 93 km/h when hunting. They hunt by crouching low to sneak up on them and pounce on them just before they have time to react. After the ‘catch’ they haul their kill in trees to keep them safe from scavengers such as hyenas. Like other cats, their tongues have papillae, sharp-pointed bumps, which are for scraping meat off the bones.

Leopards are famous for hunting from trees where their coat camouflages with the leaves until they spring with a deadly pounce. Leopards will prey on any animal that comes across their paths, such as gazelles, cheetah cubs, baboons, rodents, monkeys, snakes, fish, antelopes, warthogs, and porcupines. They have exceptional hearing senses and can hear five times more sounds than the human ear. 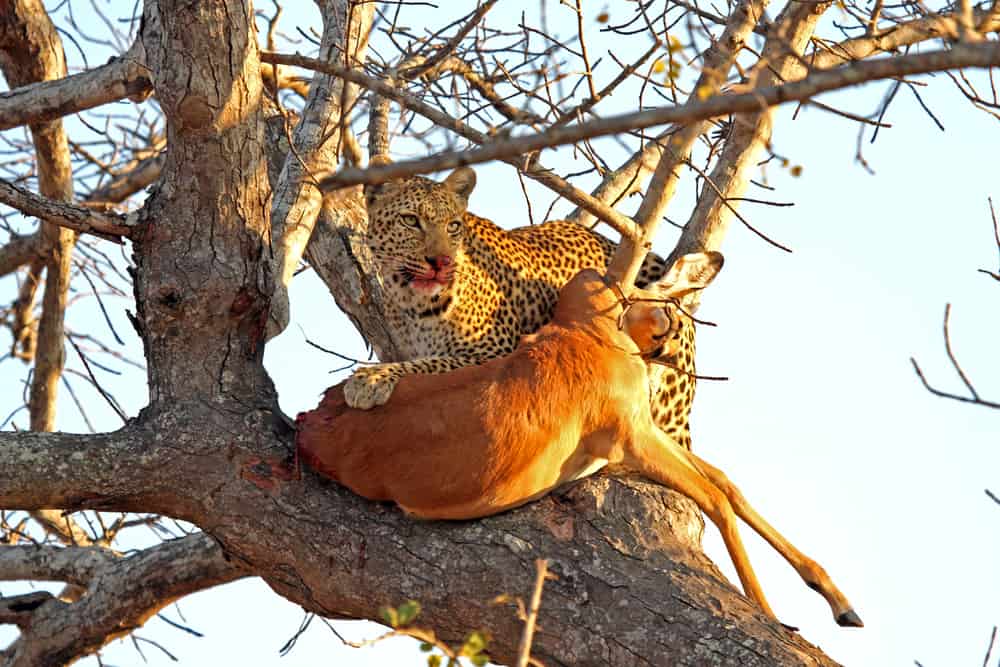 A pair of jaguars may mate up to 100 times a day. That’s exhausting. Both males and females roar when they want to mate to help bring them together. Their usual call is called a ‘saw’ although when greeting each other, their noise is like a nasally snuffling. The gestation period lasts around 14 weeks after which she gives birth to a litter of one to four cubs, which are usually blind.

Mother jaguars stay with their cubs and defend them viciously from any animal that may cause a threat – even their father. The offspring are taught to hunt and defend themselves up to approximately two years where they are ready to mate. A young male jaguar can be 50% heavier than his female sibling. 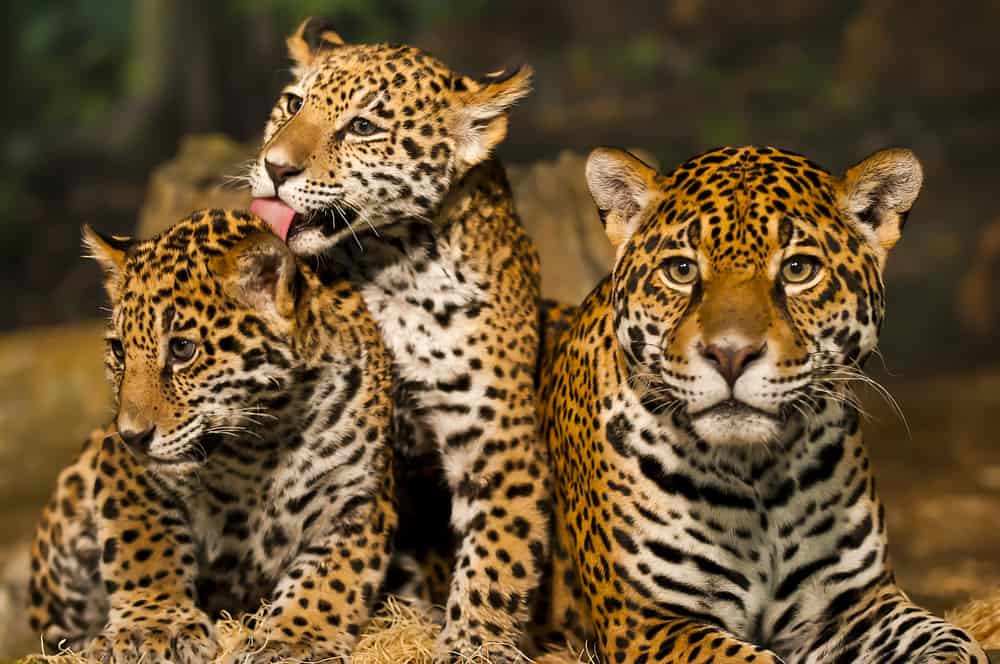 Leopards, on the other hand, have mating rituals where on average, they can mate every 15 minutes for up to 5 days. This means they can mate more than 250 times if they last 5 full days. With a gestation period of about three months, females can only give birth to a litter of two or three cubs in a den as opposed to the length of mating. Each cub weighs 17 to 21 ounces and is also born blind and hairless.

The cubs will depend on their mother for food and they do not leave the den until they are 3 months old. At 12 to 18 months, the cubs will be ready to live on their own and create their offspring at 2 or 3 years old. Leopards can live up to 15 years in the wild and up to 23 years in zoos. 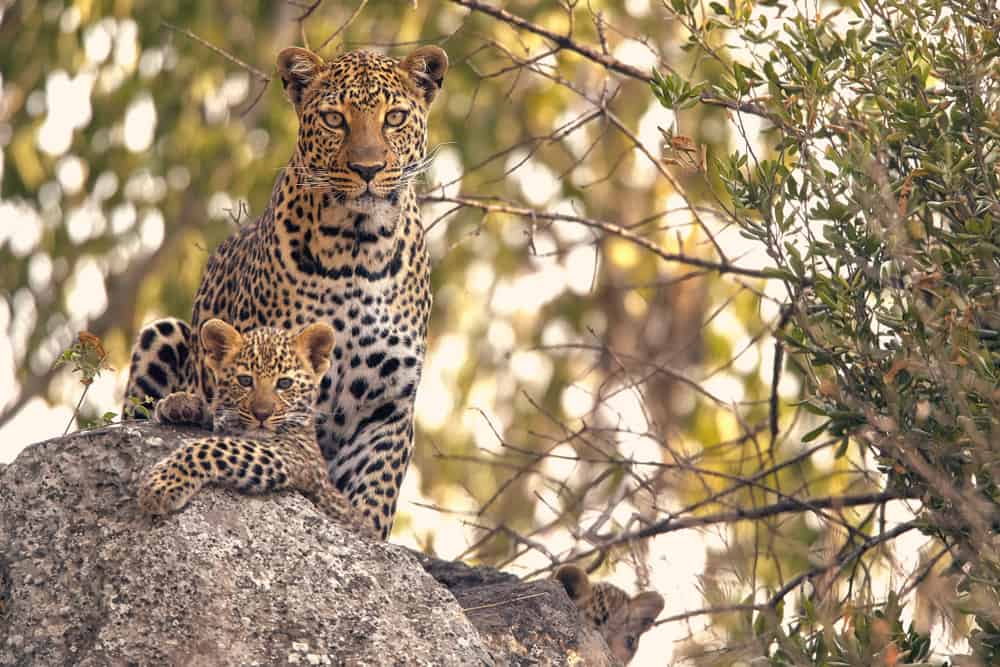 Jaguar Vs Leopard – Who Is The Strongest?

Ahead to head fight between these two cats is guaranteed fatal. Although the leopard is more intelligent and has a bite force big enough to break the neck of its prey, there is no doubt the jaguar would win the fight. The jaguar is heavier, with tremendously powerful jaws and a muscular body than the leopard. Jaguars can also climb trees, therefore, leaving no chance of survival for its counterpart, the leopard. The jaguar has therefore deemed an ideal rival to the leopard and would indeed win the fight. 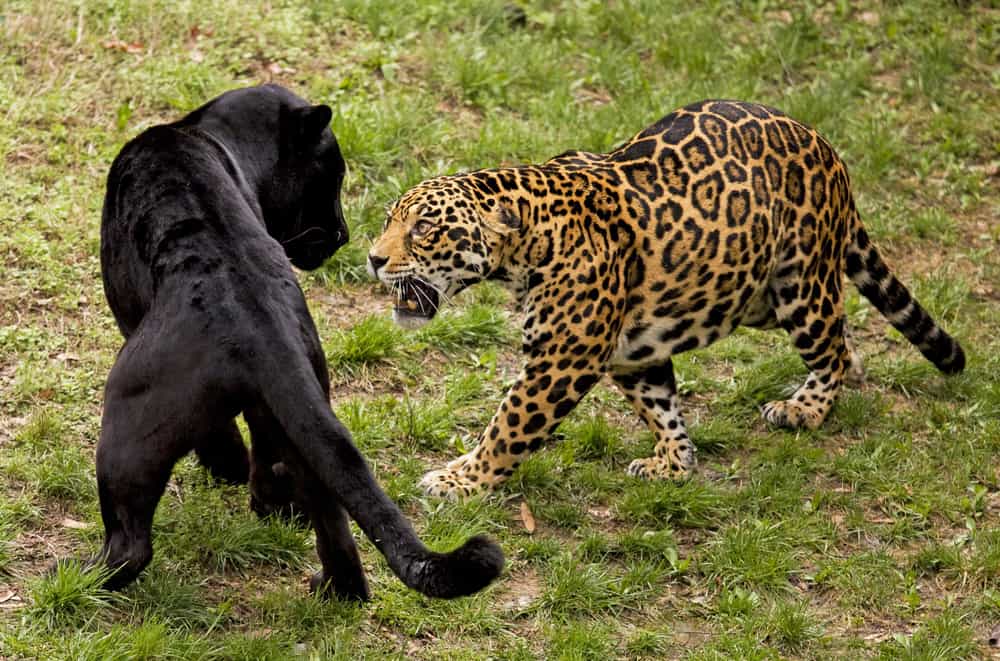 Over the years, jaguars have been deemed extinct due to deforestation and poaching. Deforestation has prompted the migration of this species due to a lack of territorial grounds for mating and hunting. This has consequently reduced their numbers and led them to hunt people and livestock. They are also vulnerable to poaching despite the strict statutory anti-poaching laws implemented by various governments. Nonetheless, demand for their skin has reduced but jaguar jaws and teeth are still sought after, in China, for traditional medicine and ornaments.